Star Trek alumni William Shatner has fired back against the latest in a series of Twitter mobs targeting the actor, this time defending his belief that the term ‘cis’ is inherently negative and only used as an insult.

On August 3rd, Shatner shared a screenshot featuring users discussing how to get the veteran actor to block them on social media, particularly by creating crude drawings of Captain Kirk engaged in sexual situations with a Ferengi dressed as Spock.

In a now deleted tweet, user @JoelJHughes replied “You’re an old white man so you MUST be a hateful bigot, is the new bigotry the kids are all about these days.” 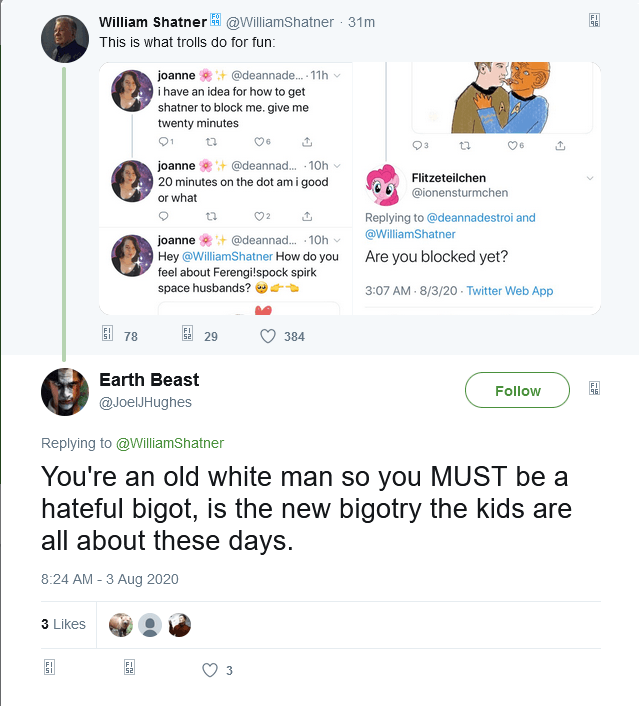 Shatner, going along with the joke, added, “You forgot CIS as in old white CIS man…need to stay current.”

User @JohnHennings3, in a similarly-now-deleted tweet, would note how he was “happily surprised you used cis without being condescending to the crowd that came up with it.”

He then voiced his confusion as to “what connections they were making to call you that kind of shit.” 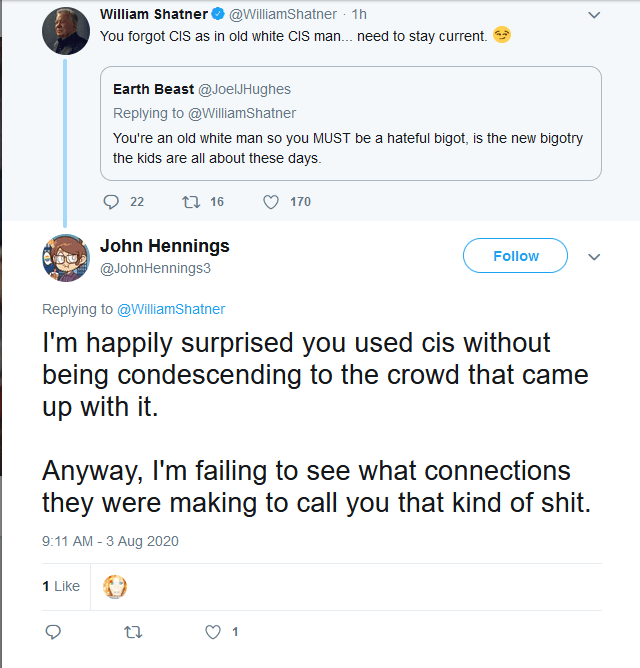 Shater would explain, “Some need labels and categories to separate people in order to harass or debase them. The only time CIS is used when referring to me is in that way. Do we need these labels in order to communicate? No. So those that use them when describing others are doing it for [negative] reasons.” 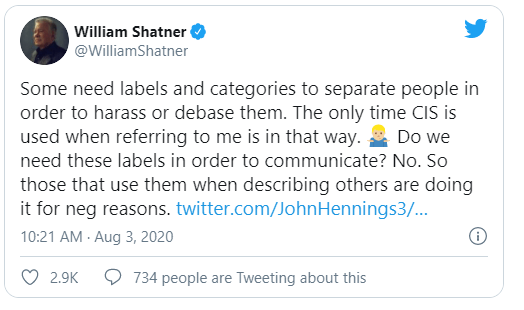 The conversation surrounding the term CIS between Shatner and other users was soon joined by another individual who attempted to use a children’s book to point out that Shatner was incorrect.

Referencing Dr. Seuss’ classic children’s story The Sneetches as an allegory for gender, user @Sekhet_Bast_Ra stated that “most of us are star-bellied, some of us are smooth bellied. Cis and Trans. Nothing wrong with either one. We’re just a little different from each other.” 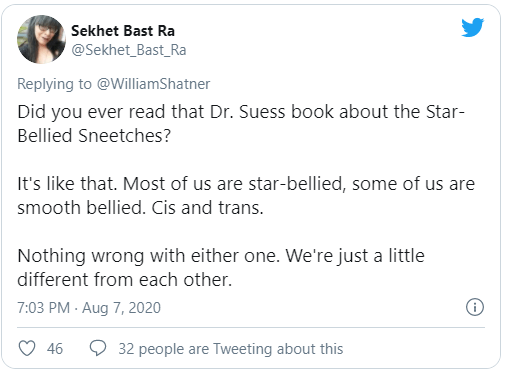 Shatner, in an example of his usual quick wit, replied, “How wonderful that Dr. Suess did that. I, however am not a Sneetsch so please don’t put a label on me to define yourself. Is that not clear enough to people?” 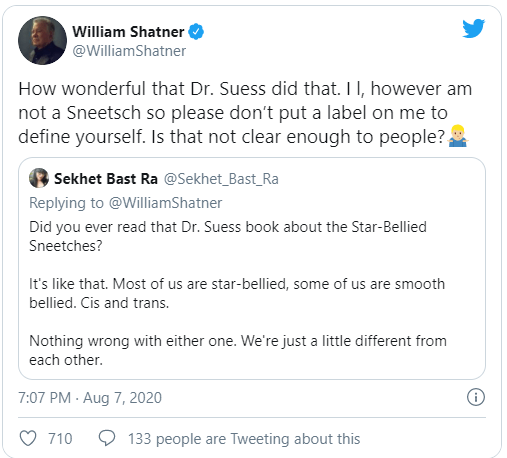 Sekhet Bast Ra would reply, “I think you know what I’m saying (Smiling emoji). Sometimes distinctions are useful, but we have more in common than whatever sets us apart.”: 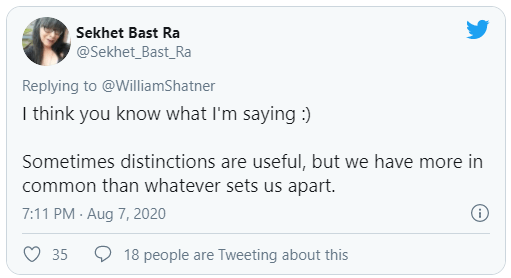 To counter Ra’s argument, Shatner would discuss his own childhood experience “being Jewish in a Catholic section of Montreal” and how identity based bullying and racism caused the actor to “feel “distinctions” are labels & labels are dehumanizing” 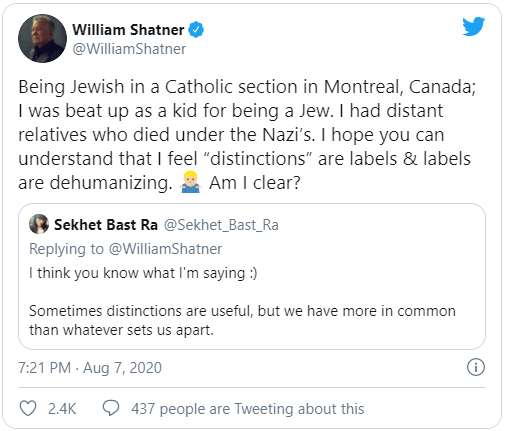 The day following this initial interaction, Shatner and Ra’s thread was discovered and quickly descended upon by Twitter activists eager to criticize Shatner for wrong think.

User @swagspan would call on Shatner to “please stop with the transphobia” and declared that “it’s not your place to tell trans folk what is and is not offensive.” 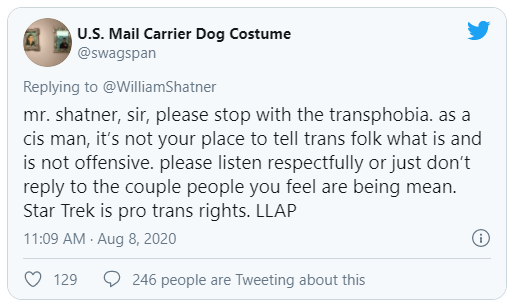 Shatner wasn’t having any of it. He questioned, “How am I being transphobic?”

He then clarified that he “asked that people not use the label CIS because it’s only used as a devisive term of debasement & harassment. What I got back was ‘Bill we have to call you that so we can define ourselves’ That’s a BS answer. If you need to use it UR a troll.” 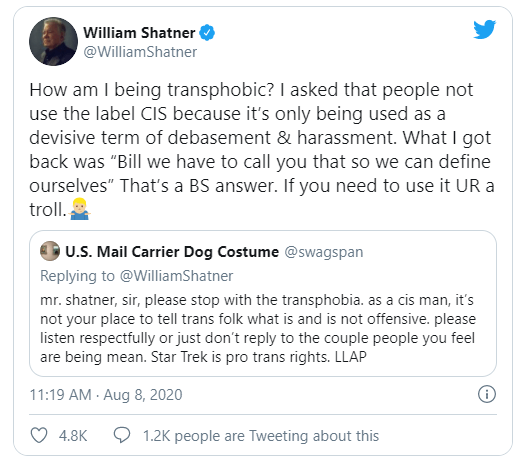 Another user went on to claim that every time he’d tweet it only proved that he was a bully and bigoted for disagreeing with “a black trans woman.”

This led Shatner to assert that “all you’re doing is trying to put a victim label on a bully.” 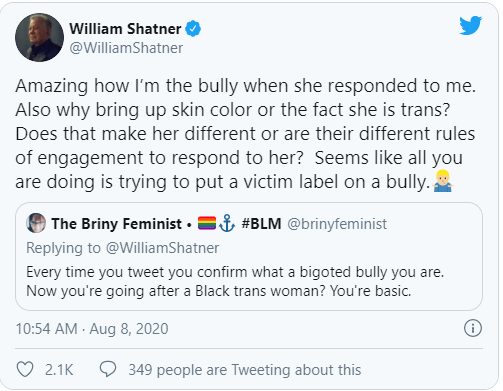 The criticisms continued, with one user dismissing Shatner by asking, “You seriously think LGB people are discriminated against because they’re not trans?? Why are you weighing in on queer oppression when you clearly know nothing about it or its history”? 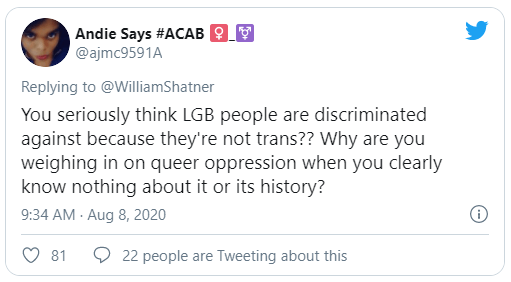 Shatner fired back, asking in return why the user was “weighing in on my tweets when it’s clear you don’t have a clue what the argument is about and you jump to a conclusion & start a dogpile?” 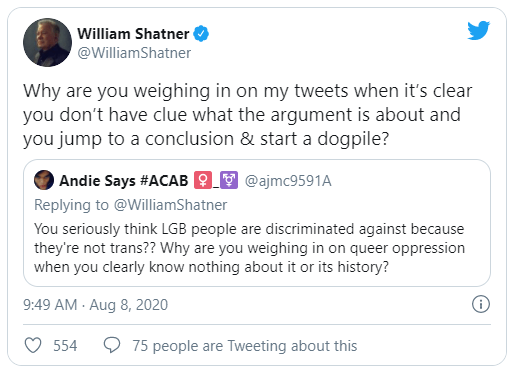 In an attempt to lure Shatner into a ‘gotcha’ moment, user @DeltVar demanded that the actor present “an example of someone being kicked out by their parents, beaten to death, chemically castrated, or otherwise oppressed BECAUSE they were cisgender.” 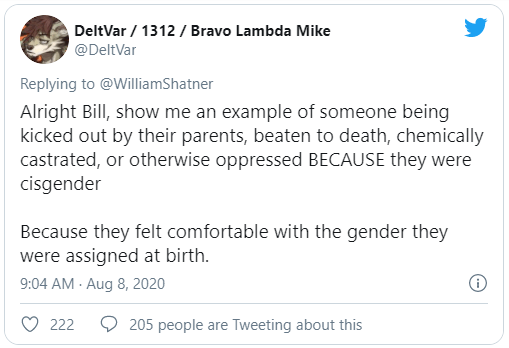 This luring attempt was ultimately unsuccessful, as Shatner readily put forth the examples of “infant females put to death in cultures where males are preferred, LGB teens who come out to unaccepting parents and are tossed out on the street or beat up or worse, etc…? All of them are presumed to be under your label of ‘cisgendered’.” 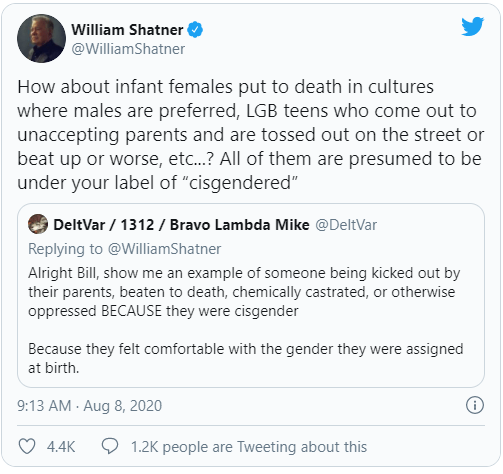 “Cis people aren’t oppressed for being cis, you’re still cis no matter how many times you say it,” claimed user @BlindRapture.

They then proclaimed that “until cis people stop dehumanizing trans and non-binary people you don’t really get to determine what words we use to talk about our struggles.” 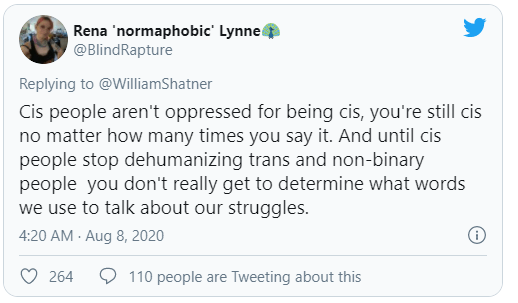 @BlindRapture’s tweet would eventually be protected, but not before Shatner caught a screen capture and archived it for his followers. 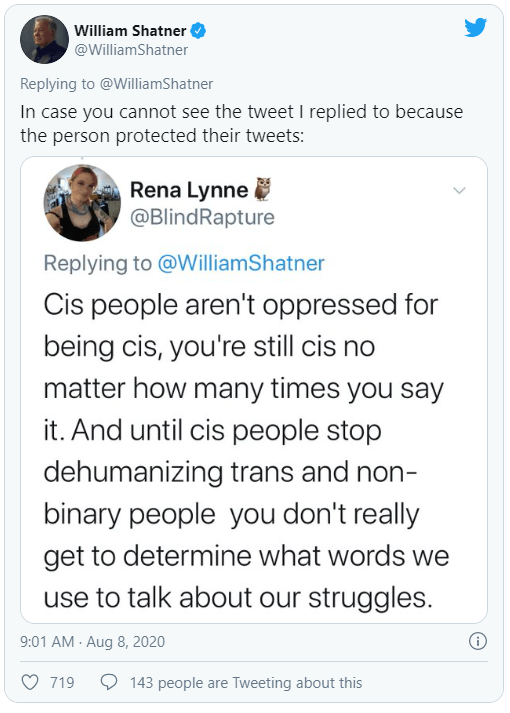 One user came to Shatner’s defense. @RationalGranap said, “I hope you knew the mess you were wading into Bill. You have found one of the many groups these days who will label you with a horrible title if you disagree with them in the slightest way. This is how the Twitter mobs work. I am in agreement with you, for what values that holds.” 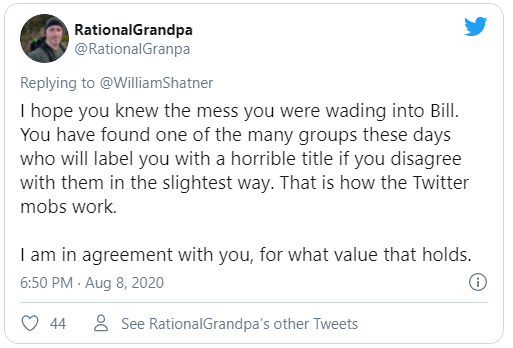 Bill Shatner, still somehow not tired after fighting off the alphabet mob replied, “I didn’t but let them label. They’d be foolish to do so. The only facts they can derive is that I do not appreciate the term CIS used to label others and myself. If that’s going to cause them to call me names then they are the ones with the issues; not me.” 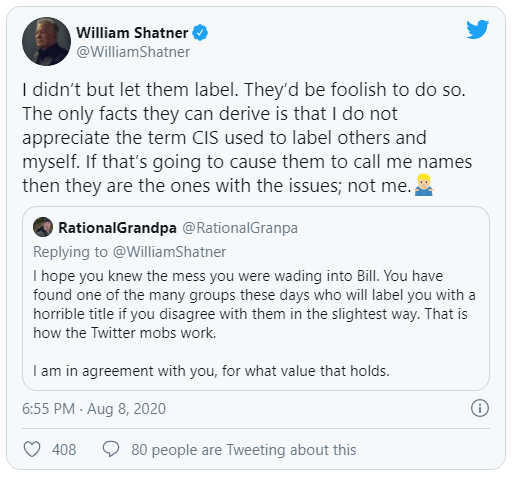 Later, Pink News, ran a smear piece on Shatner. The actor would not only call out the website, but also point out they just plagiarized their article from Twitchy.com’s documentation of the entire event.

He also called out the person who tagged him in the post that brought the article to his attention, noting that “Here’s the tweet. The hit and run coward blocked me.” 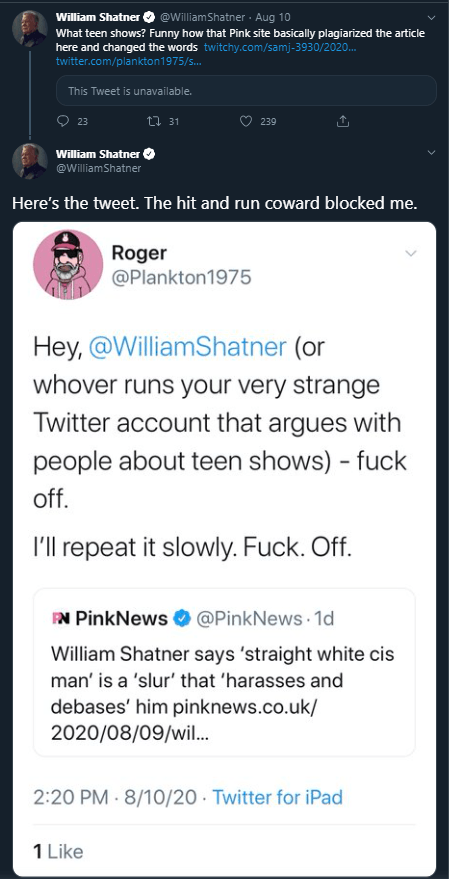 Geeks and Gamers’s Josiah reacted to Shatner defending himself from the Twitter mob saying, “Very few thing are as fantastic and entertaining as when William Shatner takes on the SJWS. And that it is exactly what he has been doing all of last week on Twitter.”

He added, “This is about to get really crazy, but it is also highly entertaining.”

What do you make of Shatner’s defense against the Twitter mob?