Hololive has issued a three-week suspension to a pair of its virtual talents, Akai Haato and Kiryu Coco, after the two characters referred to Taiwan as an independent state rather than as a territory of China. 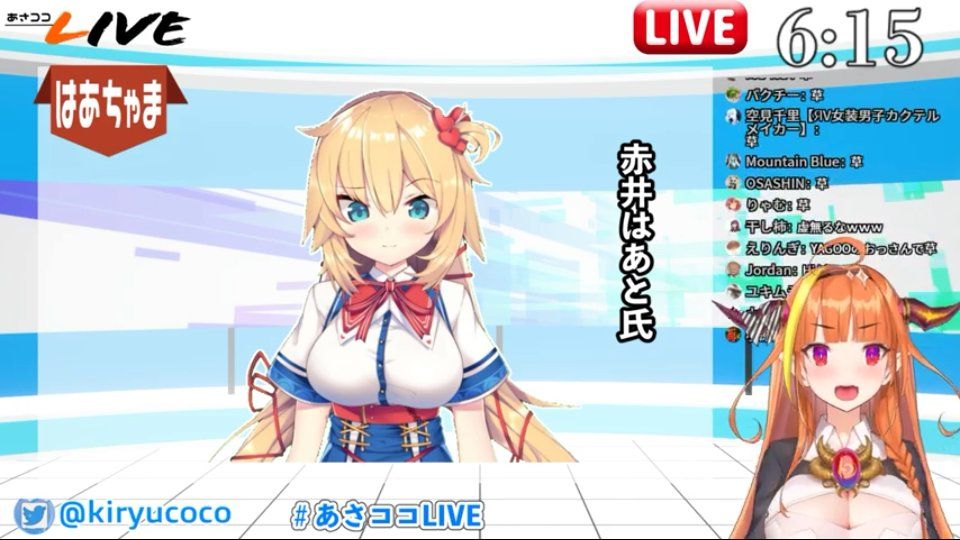 ‘Vtubers’ are a new class of internet personalities that present livestreams, chats, and videos wherein they represent themselves with or sometimes act in character as an anime-styled virtual avatar.

Though these Vtubers have risen in popularity and prominence in recent months the trend initially began in 2011 with blogger Ami Yamato and was popularized in 2016 with the creation of the first ‘official’ Vtuber, Kizuna Ai. 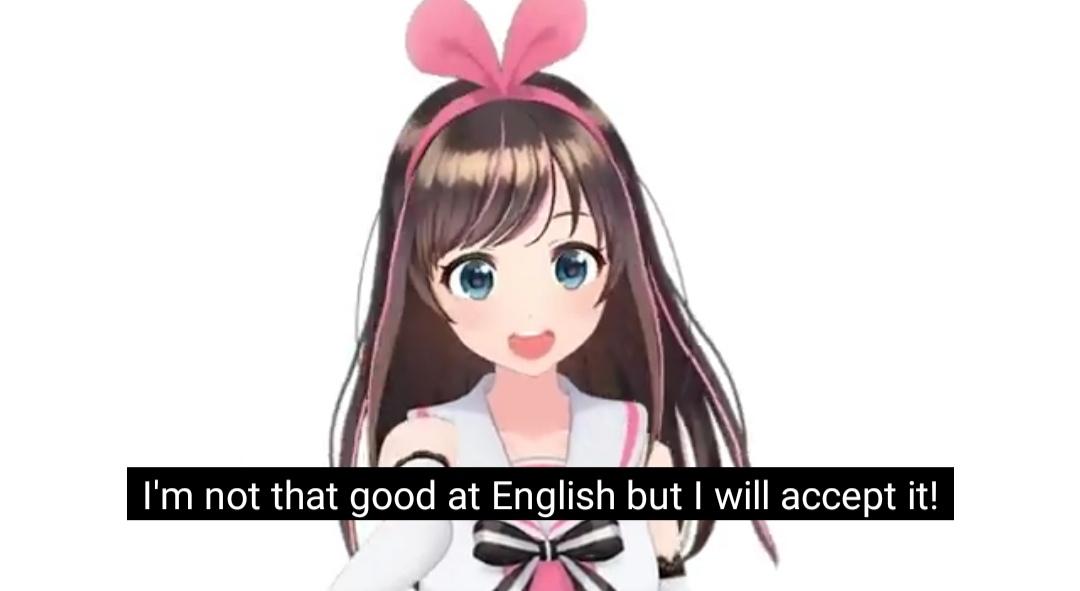 Initially founded in 2016, Hololive is a Japanese Vtuber production agency that manages and produces various pieces of content for its roster of nearly thirty virtual talents. 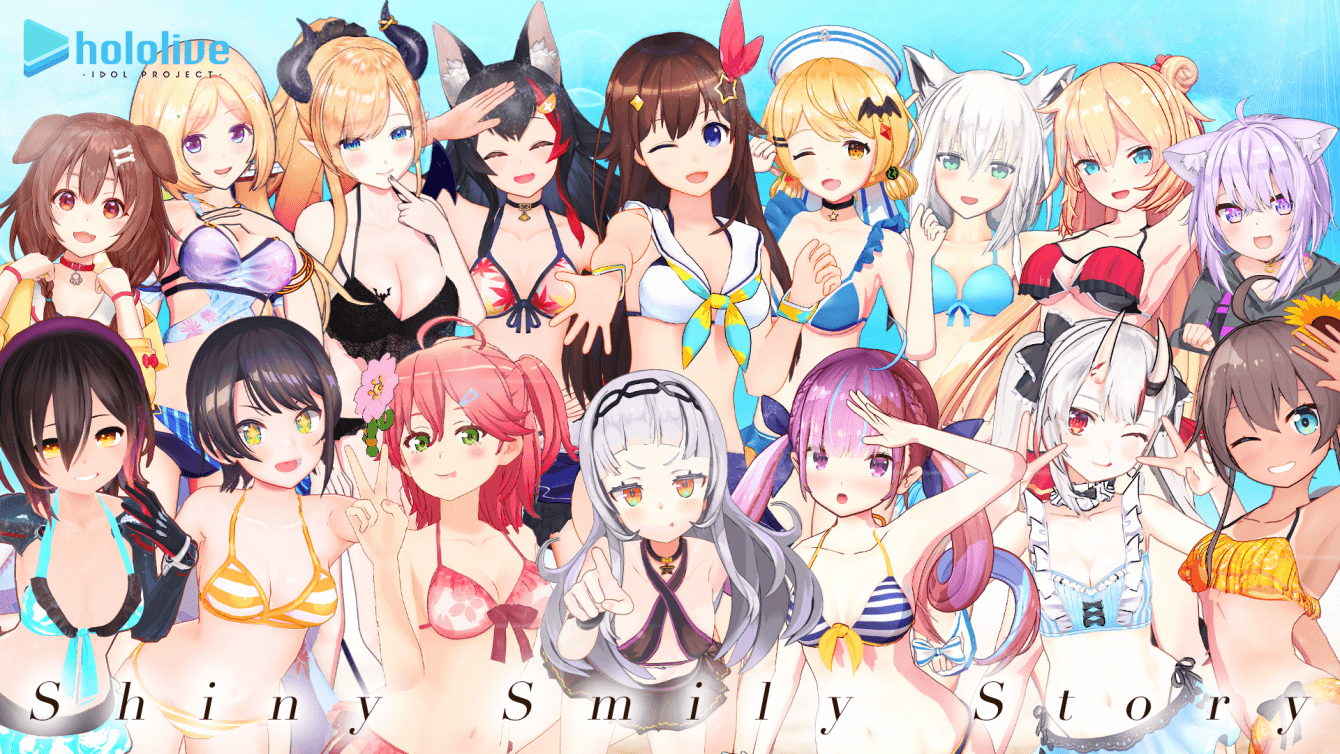 In a recent-and-since-deleted livestream held on September 26th,  Haato and Coco conducted separate segments on their own respective livestreams in which they reviewed the general locations of their YouTube subscribers and followers.

The controversial moments occurred when, during their reviews, the two merely viewed a list of Google-provided analytics that listed Taiwan as a sovereign state independent from the People’s Republic of China.

This simple act of viewing Google data that identified Taiwan was seen as a recognition of the country’s independence and resulted in the two being banned from Chinese video streaming site Bilibili. 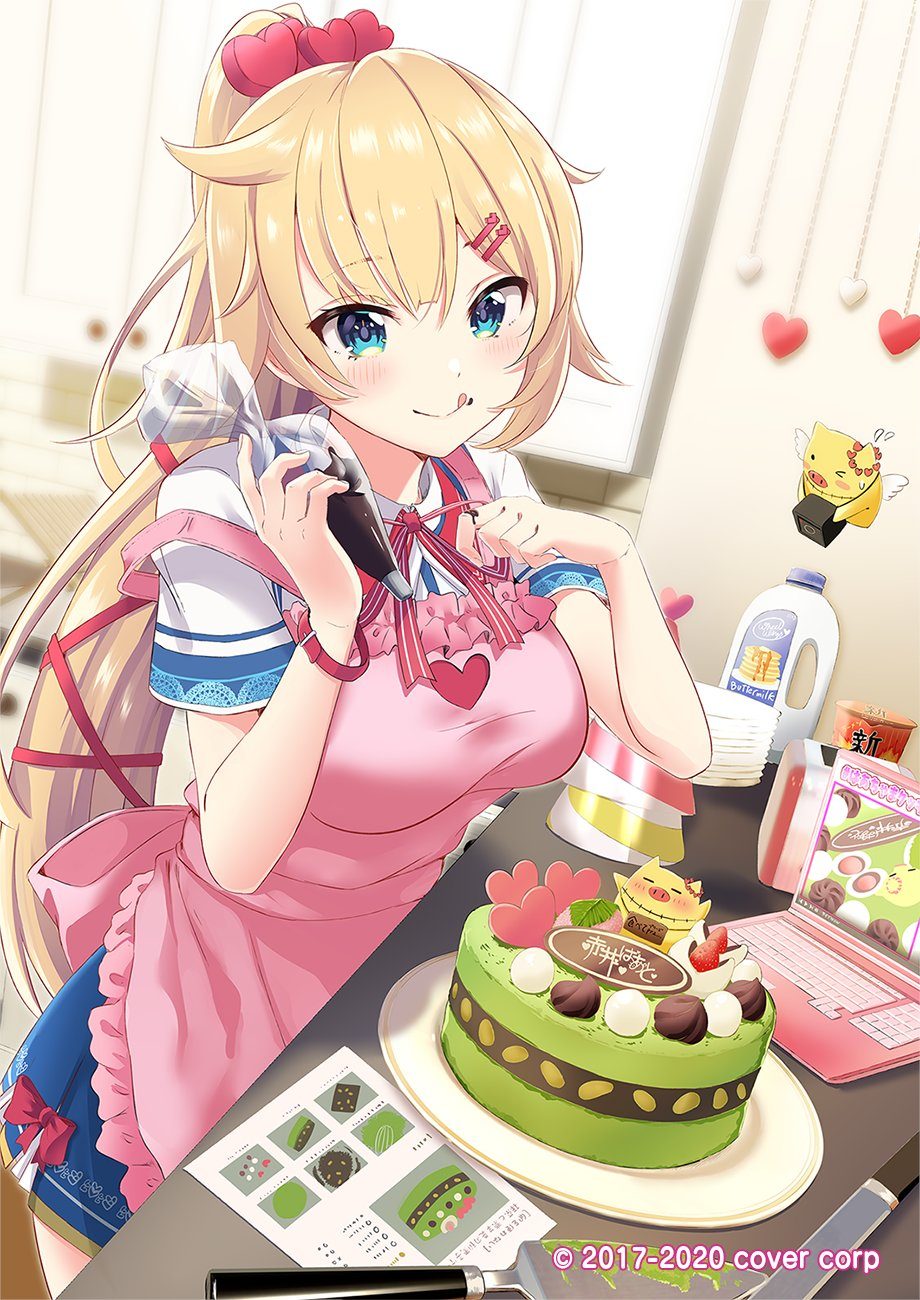 Taiwan was established in 1949 by members of the government of the Republic of China after they were forced to flee from mainland China following their loss to the Communist Party of China during the Chinese Civil War.

However, the current Chinese government continues to assert a claim over the disputed territory, and as such, refuses to recognize its independence or establish diplomatic ties with any country that does so. 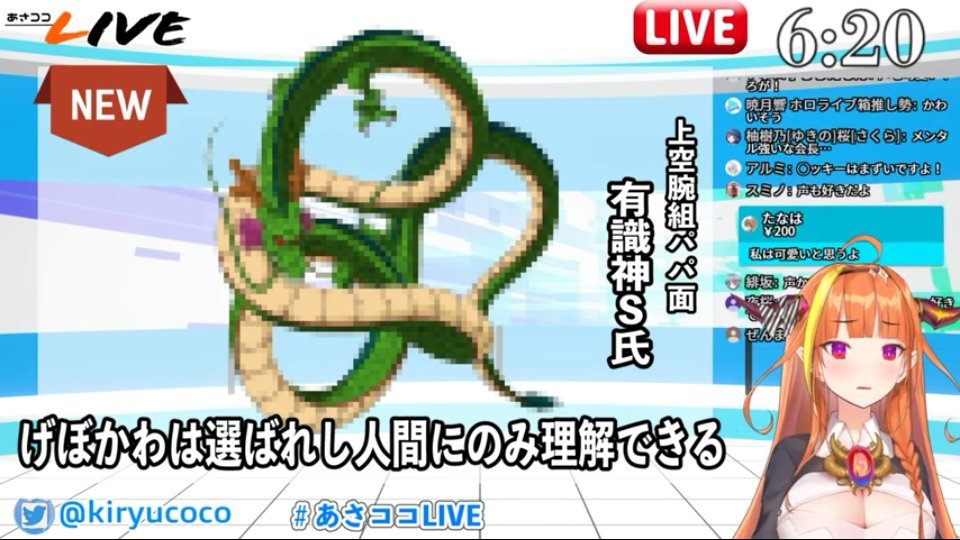 This unintentional recognition of an independent Taiwan prompted a response from Hololive, who released a statement apologizing “to the fans and supporters for any inconvenience incurred by these incidents.”

According to Hololive, the two Vtubers “divulged confidential YouTube channel analytics information on their respective live streams, used said data for their own purposes, and made statements that were insensitive to the residents of certain regions.” 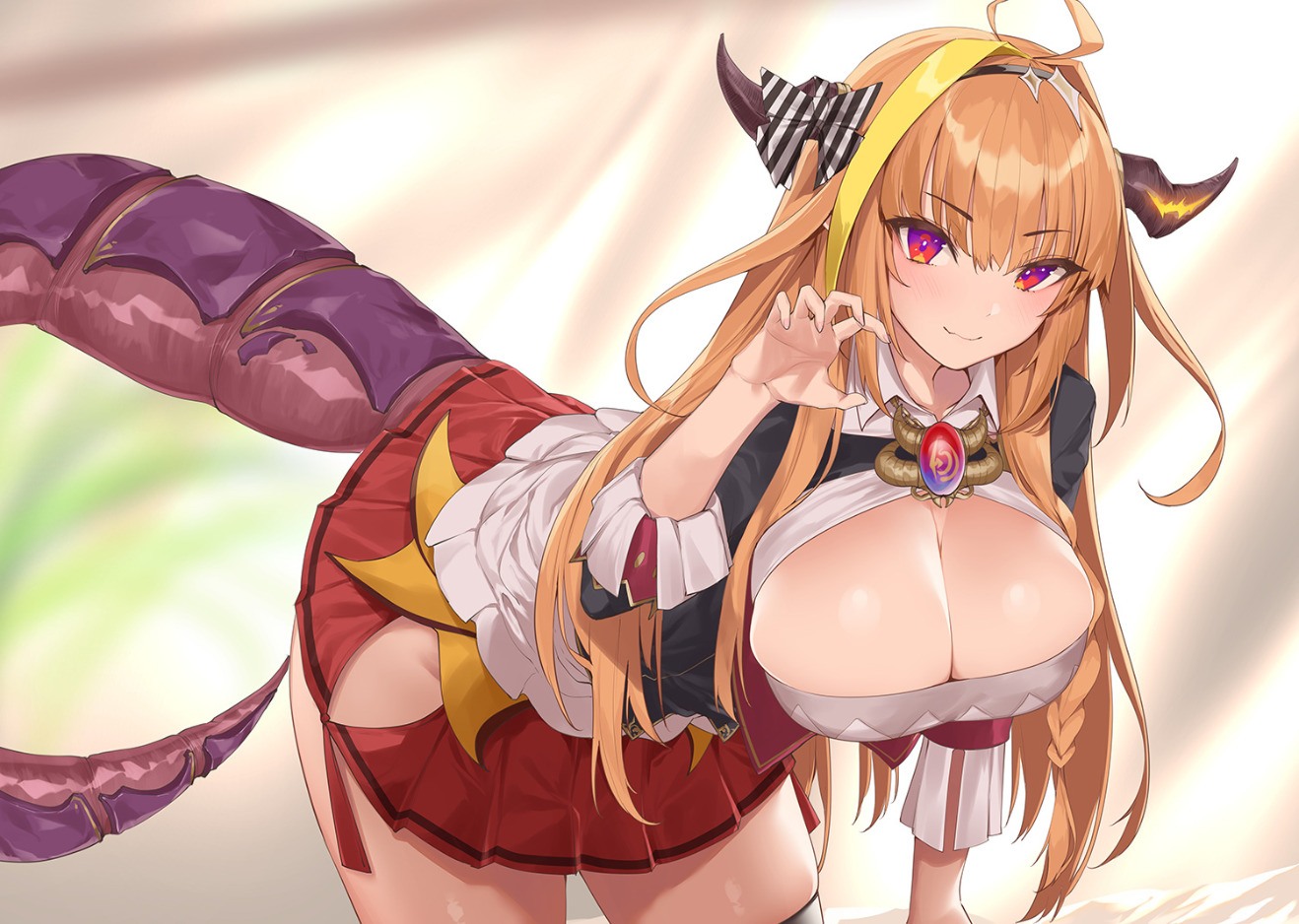 “We are currently in the process of improving our compliance training for our talents, in line with our company guidelines,” the statement continued. “In this case, neither of the talents involved were found to have acted deliberately in causing these incidents.”

Hololive further explained, “Even so, they still violated our guidelines and contractual obligations by divulging confidential information and making statements insensitive to certain nationalities.” 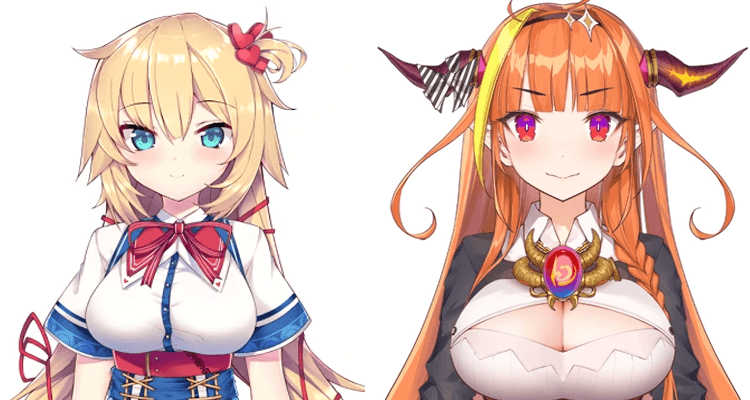 The talent agency concluded their apology by announcing that “due to their breach of company guidelines and contract, Akai Haato and Kiryu Coco will be suspending their talent activities for 3 weeks, and we will be ensuring that our guideline training is more thorough going forward.” 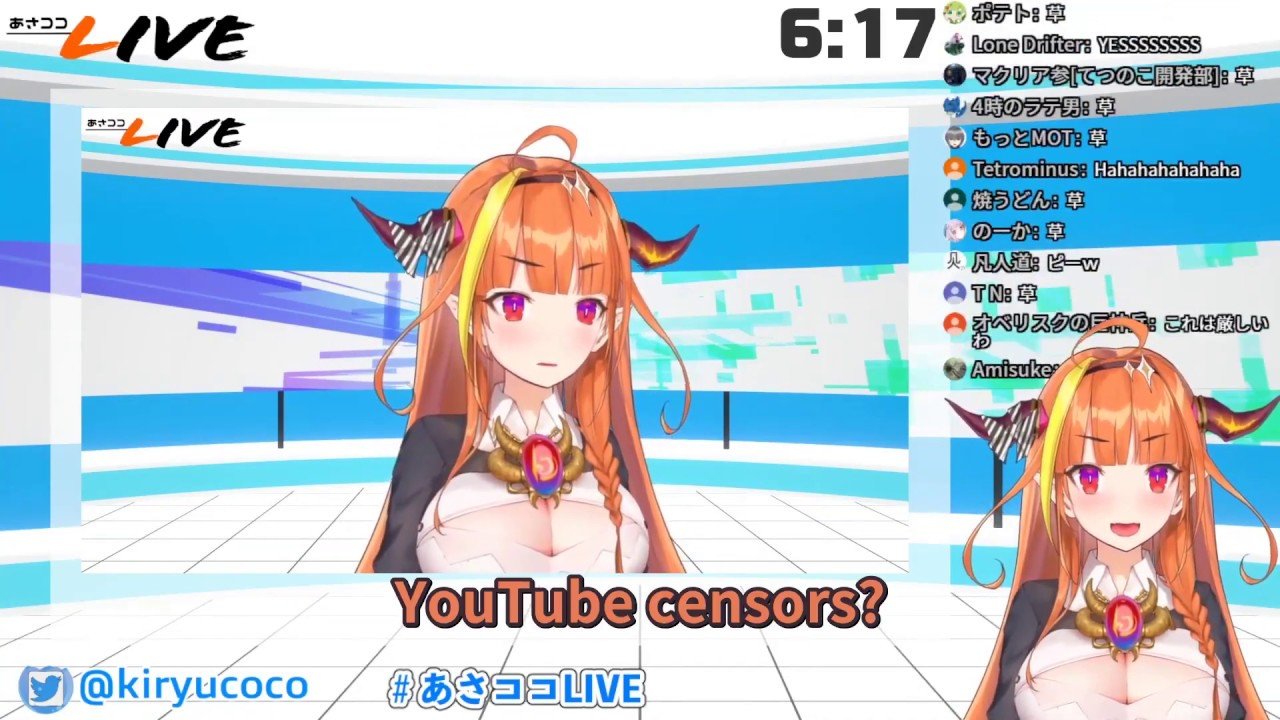 Haato and Coco also issued apologies for the incidents from their respective Twitter accounts.

“I regret the inconvenience caused to you by my careless,” wrote Haato. “From now on, I will be careful not to make inadvertent remarks.” 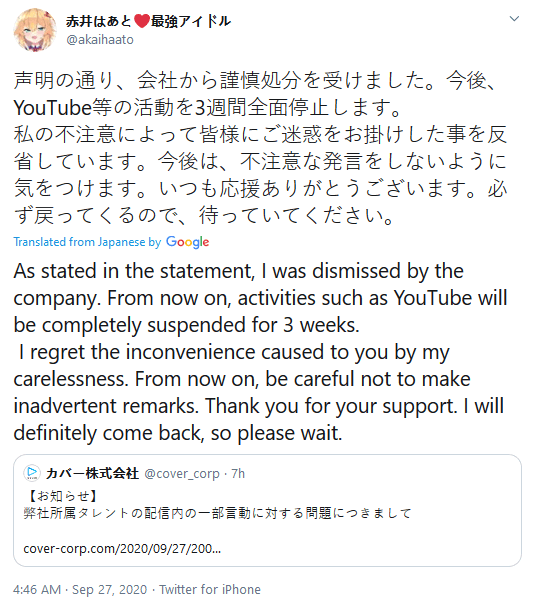 Coco stated that she was “sorry” and would “take this situation properly and strive to raise awareness” of her mistake. 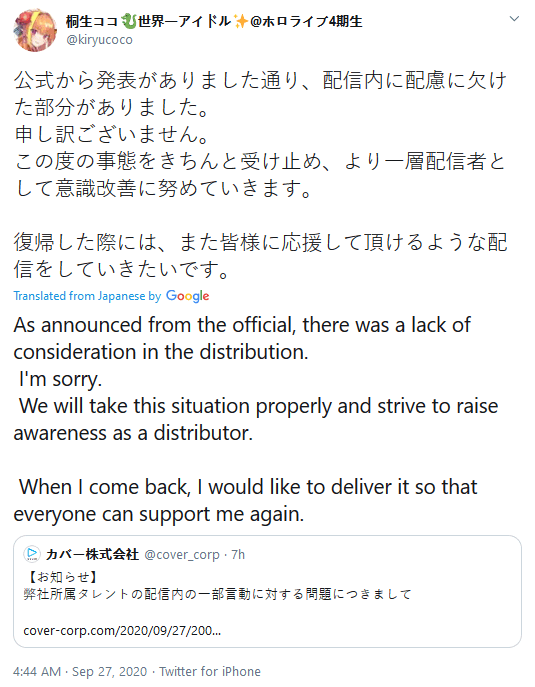 Aside from the obvious blow to their respective streaming schedules, Haato and Coco’s respective suspensions have also had negative effects on the official /r/Hololive subreddit.

When outraged fans took to the subreddit to voice their concerns and anger to Hololive, the company responded by deleting any posts critical of their decision, which has led to widespread disagreements between the fans and Hololive administrators. 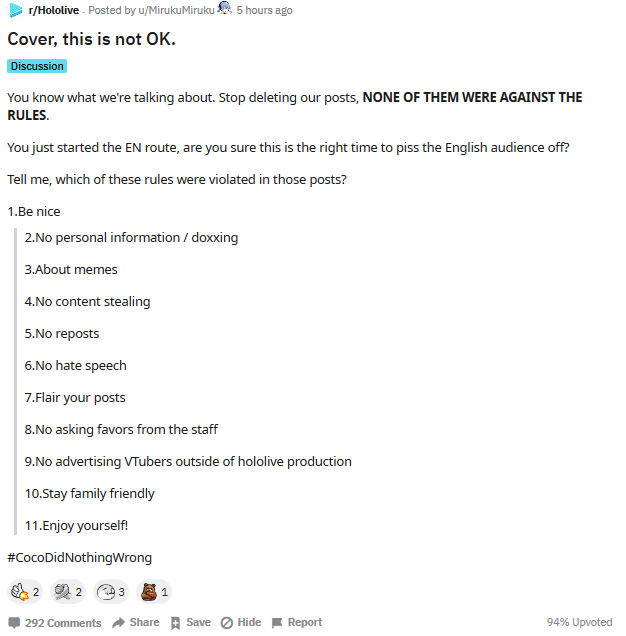 Some fans have speculated that Hololive’s response was done in an attempt to protect the Vtuber’s careers in China, but as of writing, no further reasoning for their suspensions has been provided.

What’s your opinion of Haato and Coco’s suspension? What about Hololive’s response to the fans? Let us know your opinions on social media or in the comments down below!