Pratt, who voiced Barley Lightfoot in Onward, took to Instagram to ask his fans to support the film. 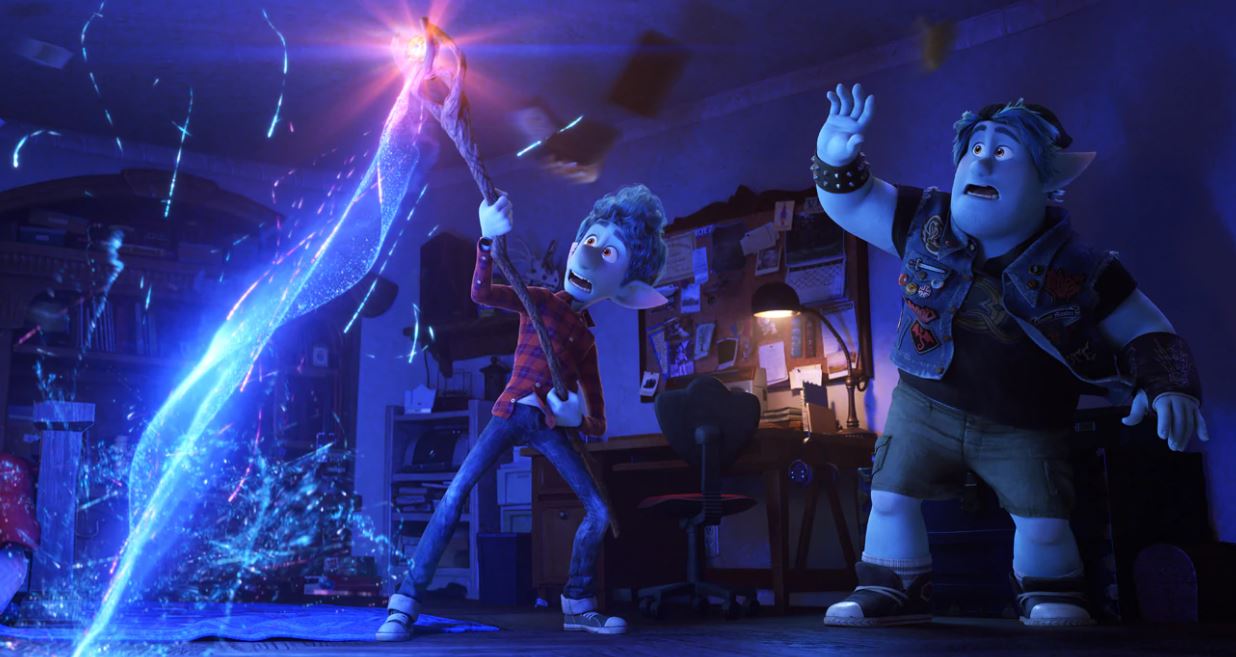 Pratt wrote, “With all that’s going on in the world it is more important than ever that you vote. Just ask any celebrity. They will tell you. Every day. Several times a day. To vote.”

He continued, “But me? I will tell you EXACTLY who to vote for Onward The heroes before us did not spill their blood only to have their sacrifices wasted by your apathy. The upcoming 2020 People’s Choice Awards is the most consequential vote in the history of mankind times a million infinity.”

“Vote for Onward for family movie of the year. Or else. You WILL die. No hyperbole. Click the link in my bio. Let your voice be heard,” he added. 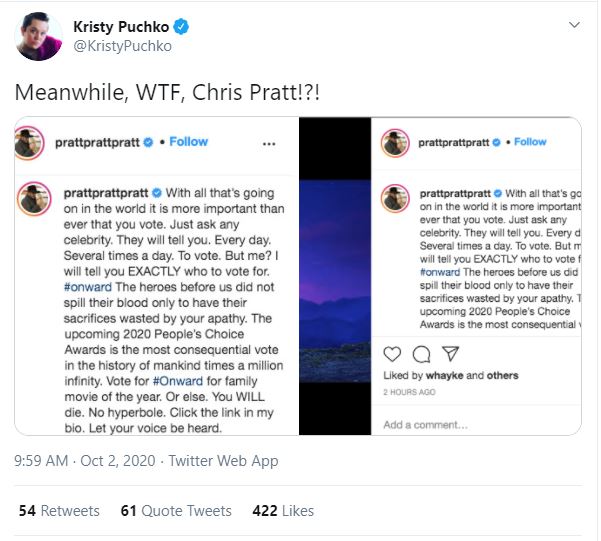 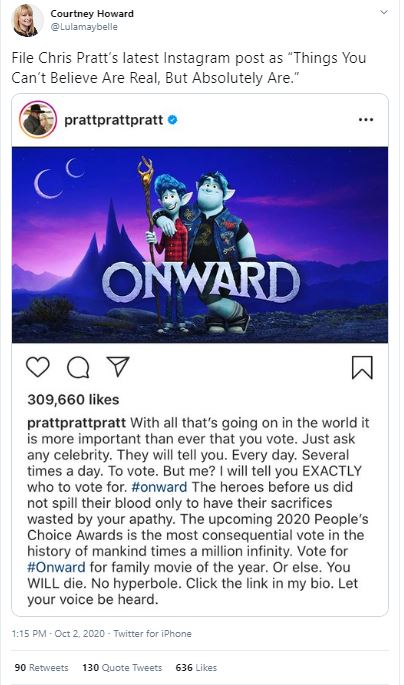 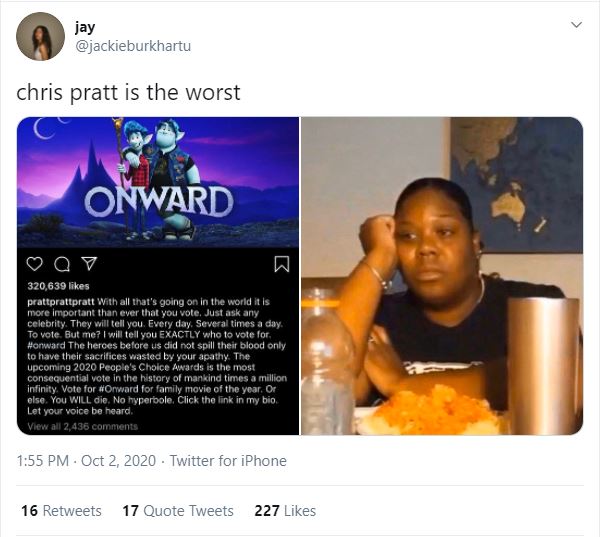 Journalist Carlye Wisel wrote, “the Chris Pratt thing is even *more* egregious when you remember that people who create, built and operate theme park attractions he stars in — at multiple resorts!! — are overwhelmed *daily* with the stress of if they still have a job and how to move forward if they don’t.” 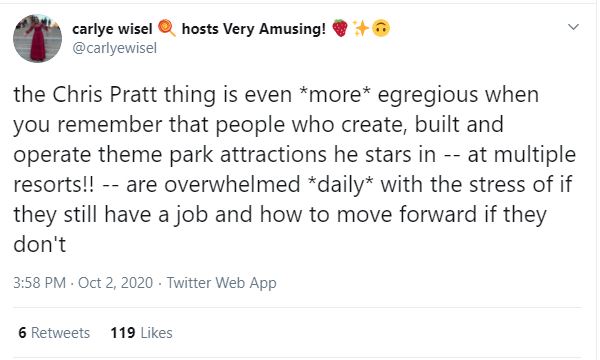 Wisel added, “sry but if I’m a cotton candy reporter who can’t stop hurting for employees and their fears about bills, safety, housing, income, career, families and health, someone with a platform and big money can surely do more than campaign for the most laughable award show in existence.” 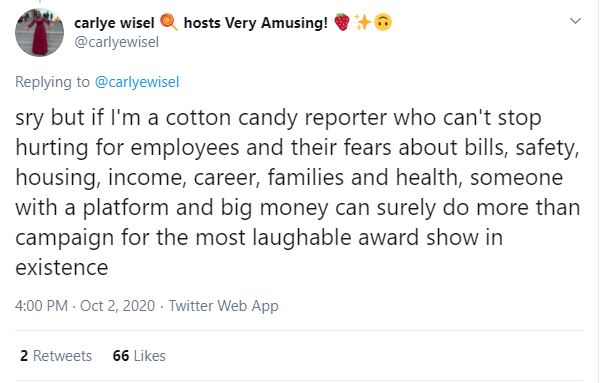 One user, @buckymatters, wrote, “Chris Pratt said the election does not concern me because I am a white privileged man, instead vote for my movie so I can get more awards.” 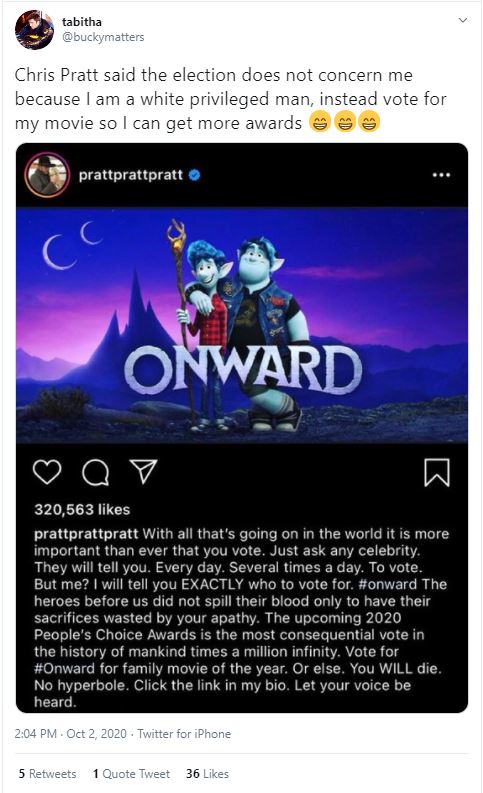 The Dis Insider Editor-in-Chief Skyler Shuler wrote, “Chris Pratt acting like a nut job isn’t shocking, it’s 2020, nothing will shock me at this point.”

While a number of people would attack Pratt and call him names, many indicated they would actually vote for Onward and thanked him for sharing something positive in replies to him.

Carol Hieronymus wrote, “I wanted to say thank you for posting something positive. Its just been post after post about so much negativy, it’s nice to see people out there still posting other things.” 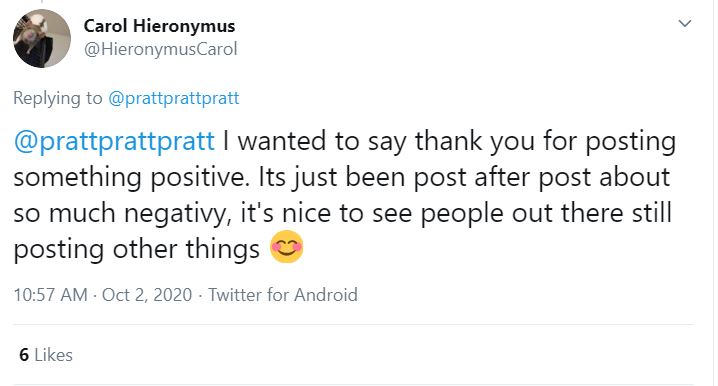 Ondine de La Mer wrote, “It’s nice to have something to laugh at this morning.”

And Antonette Vergara wrote, “Alright vote for the movie guys.”

Pratt is no stranger to getting slammed on social media and berated in online articles.

Related: British Paper The Independent Pushes Idea That Guardians of the Galaxy Star Chris Pratt Is Sexist After Joke About Wife’s Cooking

Last October, The Independent went after Pratt claiming that he is sexist for making a joke about his wife’s cooking.

However, in the article no evidence is actually shown of anyone calling Pratt a sexist.

Back in July 2019, Pratt was raked over the coals for wearing a T-shirt with a variation of a Gadsen Flag on it. 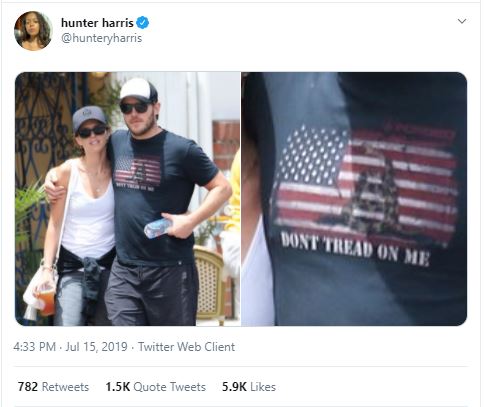 In a now deleted tweet, one user accused him of associating with bigots for simply wearing the T-shirt.

They wrote, “Unfollowed already. Haven’t liked him since Parks & Rec anyhow, and I can easily cancel him in that too. Chris Pratt hope those bigots pay you a good pay check. Bye girl.”

Actress Ellen Page would also attack Pratt for his church attendance. Page took to Twitter where she wrote, “Oh. K. Um. But his church is infamously anti lgbtq so maybe address that too?” 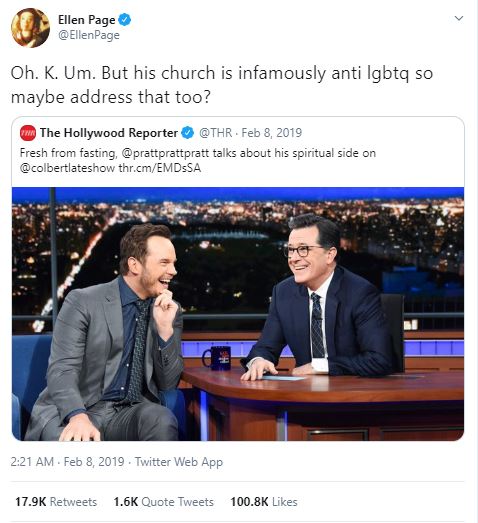 What do you make of this latest attack against Chris Pratt?