A recently revealed Magic: The Gathering card featuring The Walking Dead’s villainous Negan has sparked a wave of backlash from fans offended by the game’s inclusion of a character with a dubious connection to sexual violence. 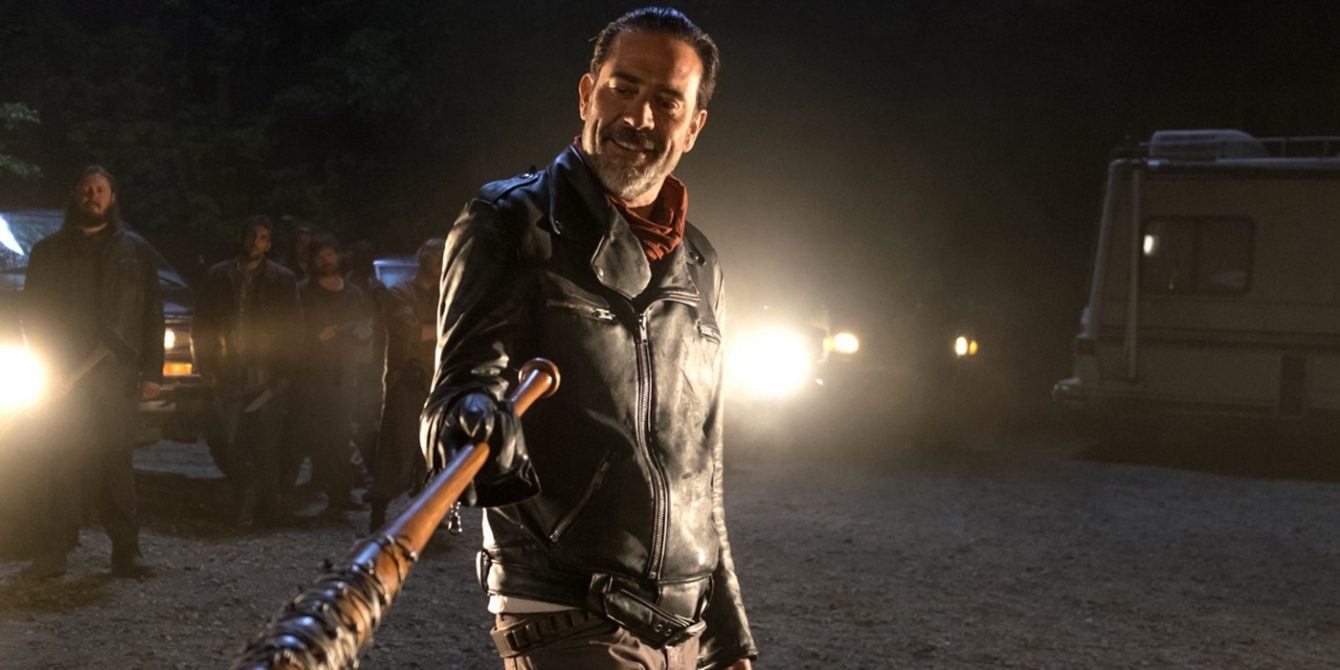 Introduced as part of the game’s “Secret Lair” series, Magic: The Gathering’s latest set of cards features various characters from The Walking Dead television series, including generic walkers and heroic characters such as Rick, Daryl, Glenn, and Michonne. 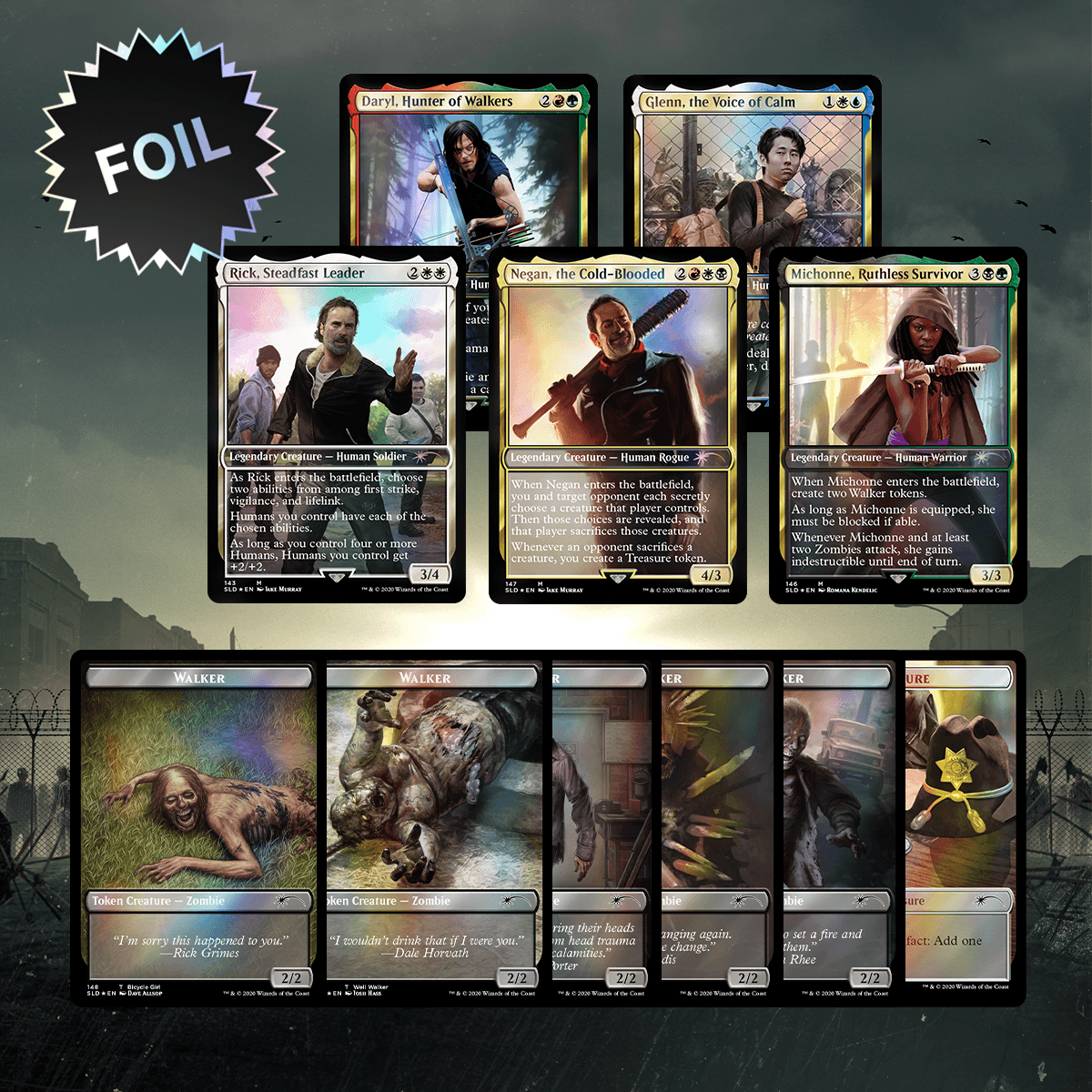 Aside from the series’ zombies and protagonists, the set also includes a card featuring the antagonistic Negan, the Lucille-wielding, notoriously violent former leader of the Saviors, as played by Jeffrey Dean Morgan on the television series. 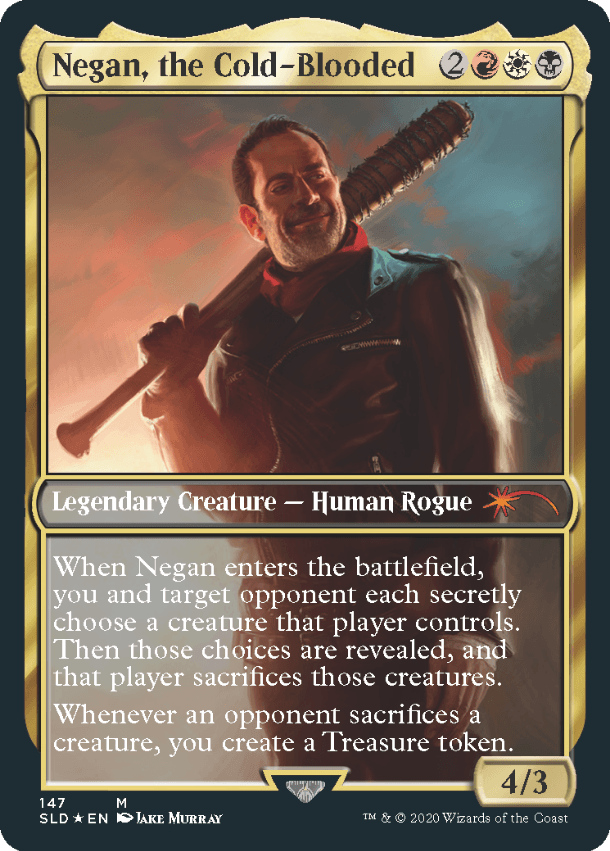 The announcement of Neegan’s addition to the game sparked a wave of outrage amongst the Magic community, as many players took offense to Wizards of the Coast’s use of a character they classified as a rapist.

“I feel very strongly against Negan‘s introduction to the game,” said artist Andre Garcia. “His treatment of women is despicable, and his inclusion shows how *some* at @wizards_magic have little regard for the social awareness the community holds dear.” 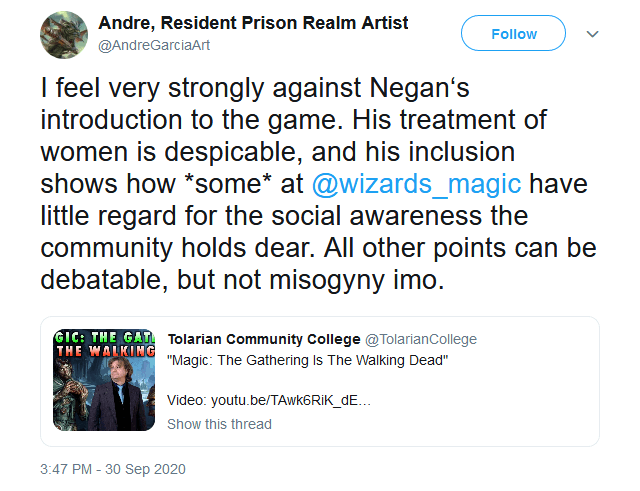 The official Twitter account for The Spike Feeders, a YouTube account dedicated to Magic: The Gathering’s commander format found “Negan’s backstory” to be “extremely problematic” and stated that they were “surprised and disappointed that @wizards_magic would choose to highlight him as a named character in legal Magic formats”. 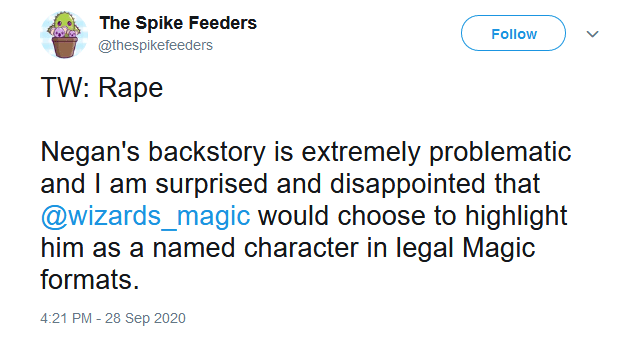 @Raffyk99 found himself confused that the company featured Negan “in what is supposed to be a game that is progressive and able to be played by children,” and asked “How is that even allowed, let alone considered a good fit?” 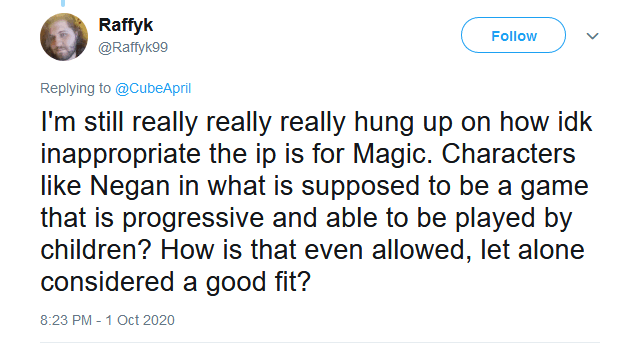 The classification of Negan as a rapist has been a long-time subject of debate among many fans of both The Walking Dead television series and comic book.

For some, Negan’s strictly and brutally enforced anti-rape policy, combined with the fact that he has never physically forced himself upon one of his victims, is proof that the villain does not fit the definition of a rapist. 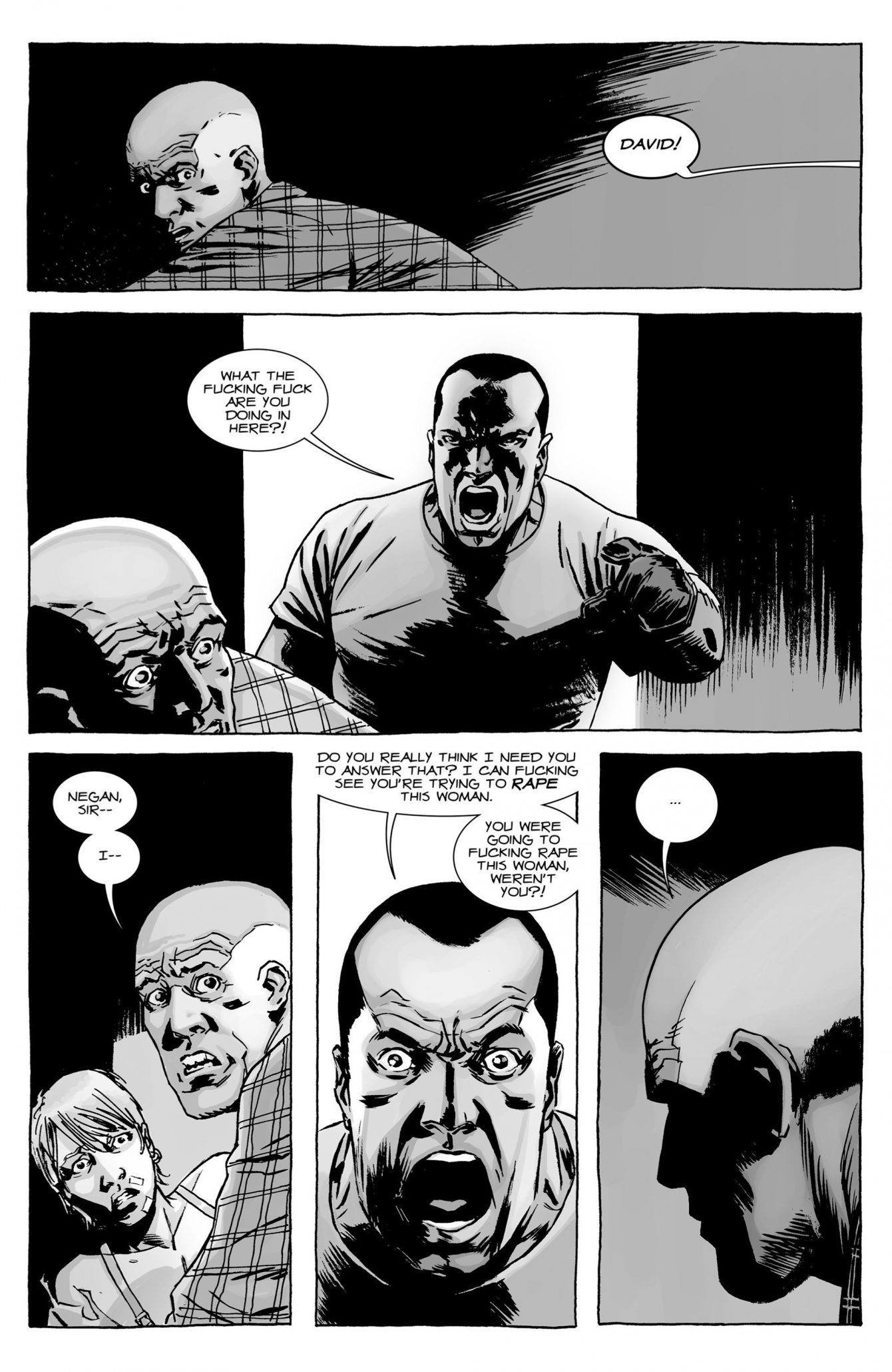 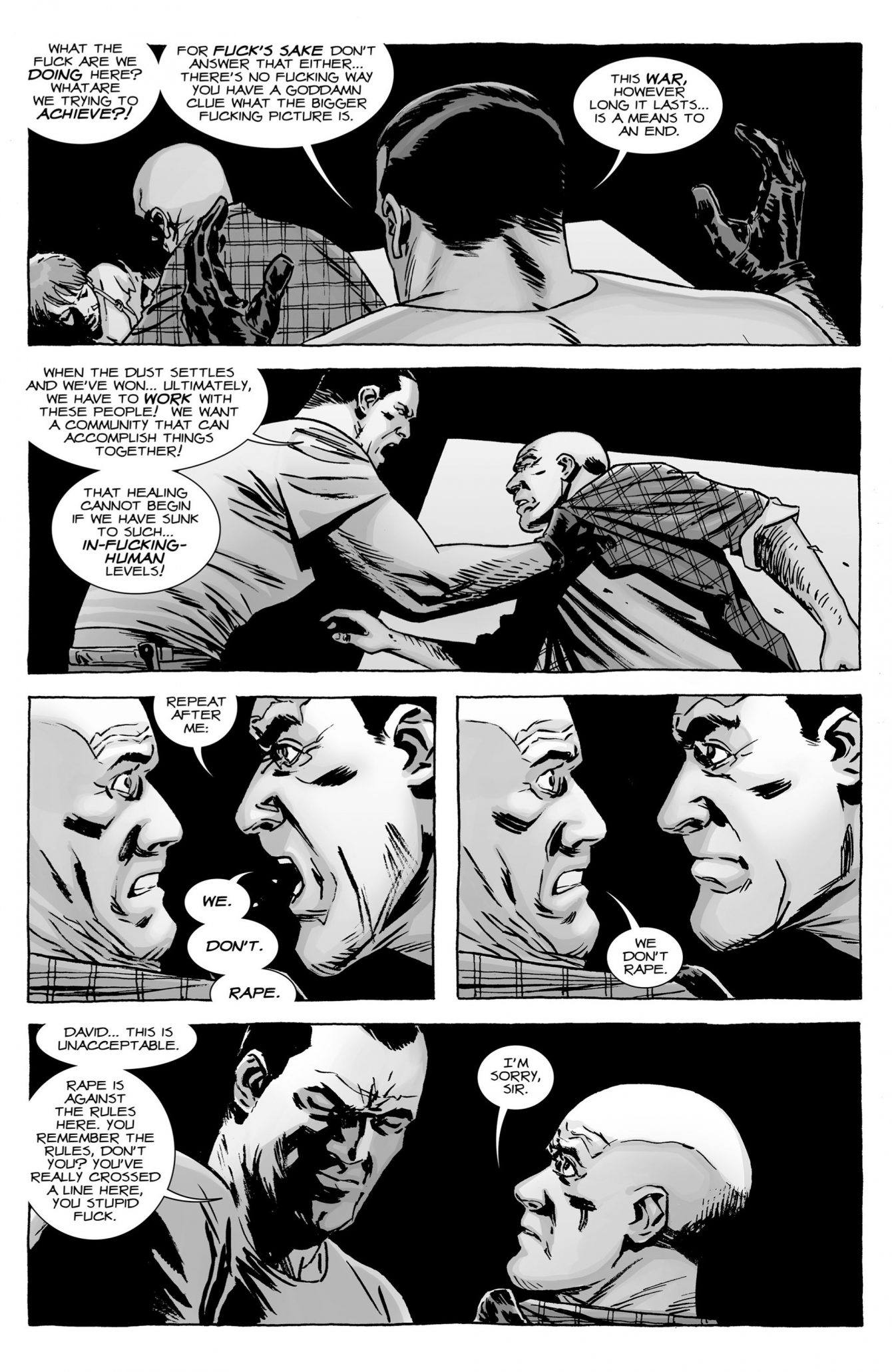 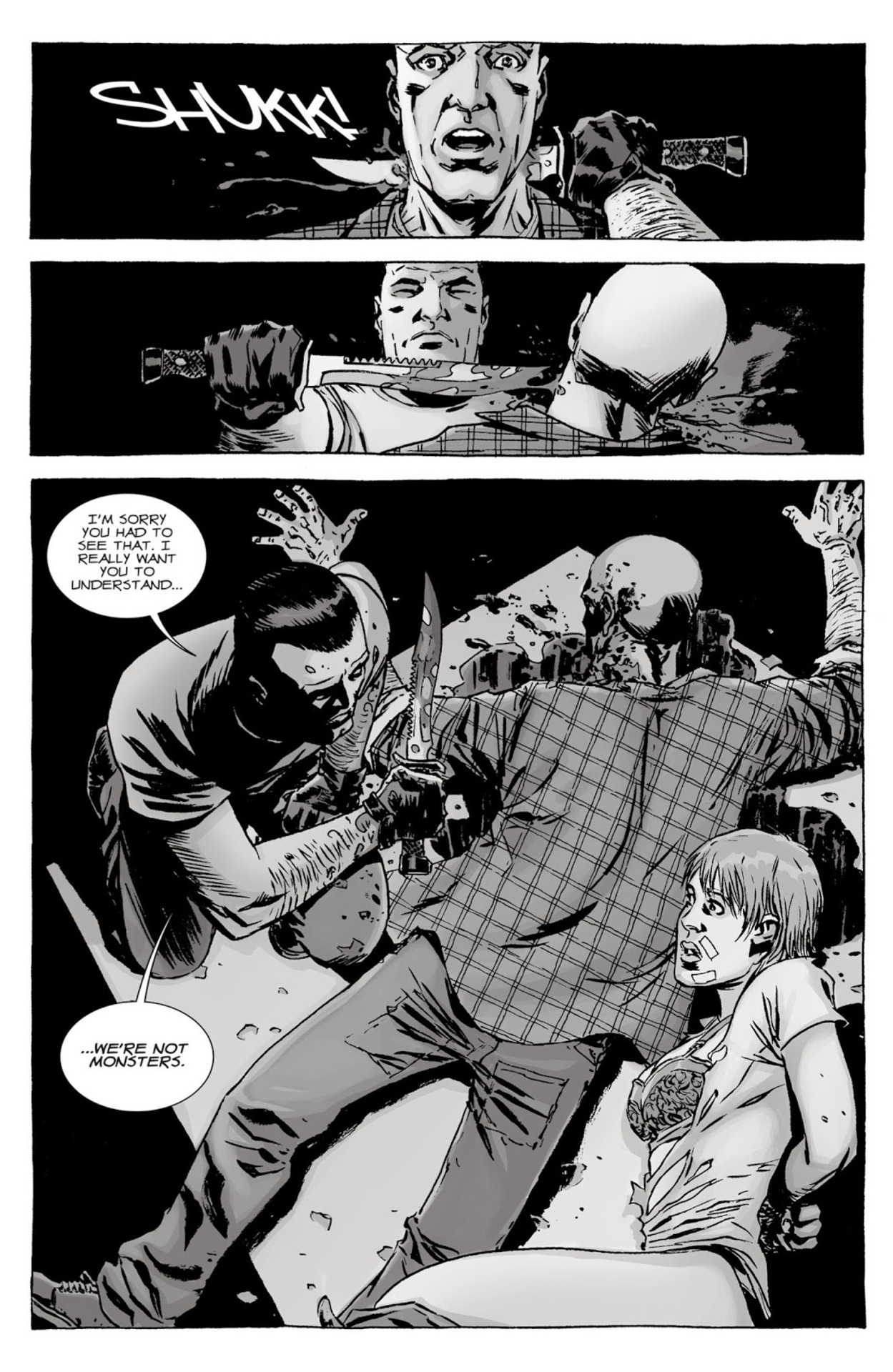 Others argue that Negan’s offer to his ‘brides’, which forces them to choose between becoming his willing concubine or living in squalor and suffering outside of his protection, can be seen as an act of rape via sexual coercion. 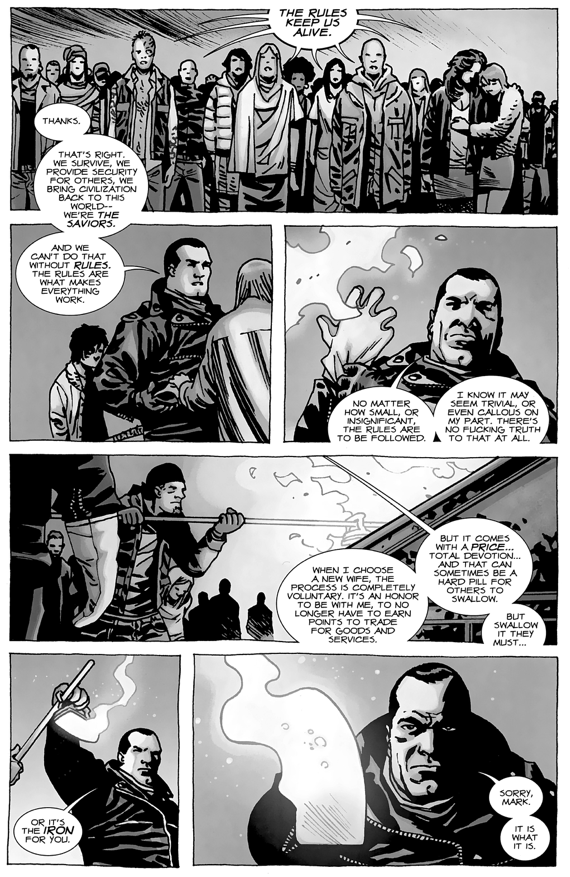 In addition to Negan’s inclusion due to his character, players also took issue with the set’s limited availability and its lore-breaking inclusion of non-Magic related characters, all of which eventually led Wizards of the Coast to issue a statement addressing these concerns.

On the particular topic of Negan, Wizards of the Coast member Sheldon Menery noted that they had “heard some displeasure over the Negan character being on a card, given his (fictional) history of terrible actions” and were “sympathetic to this,” even going so far as to “give some consideration to banning just that card”.

However, the company ultimately stated that they chose “not to [ban the card] because Negan is a villain, plain and simple.” 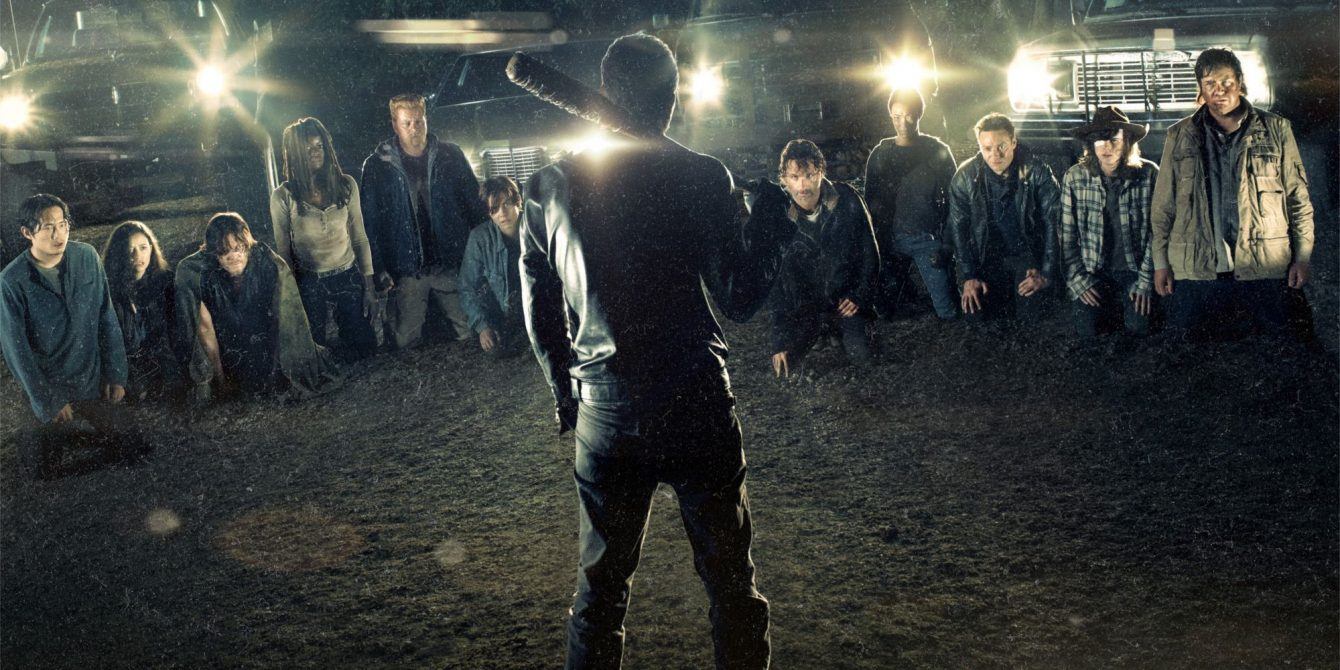 “There’s no implied endorsement, sanitation or glorification of his actions,” explained Menery. “In that, he’s no different than other villains already in the Magic universe, even though as portrayed by an actor it seems closer to “real world” discomfort.”

Menery further clarified that “No one is suggesting that by putting him on a card  he should be idealized, any more so than Nicol Bolas or Yawgmoth.”

He then went on to use the outrage “as an opportunity to remind each other to respect other players’ boundaries.”

“Being empathic and accommodating is vital for a healthy gaming community; being considerate of other players makes us all better,” concluded Menery. 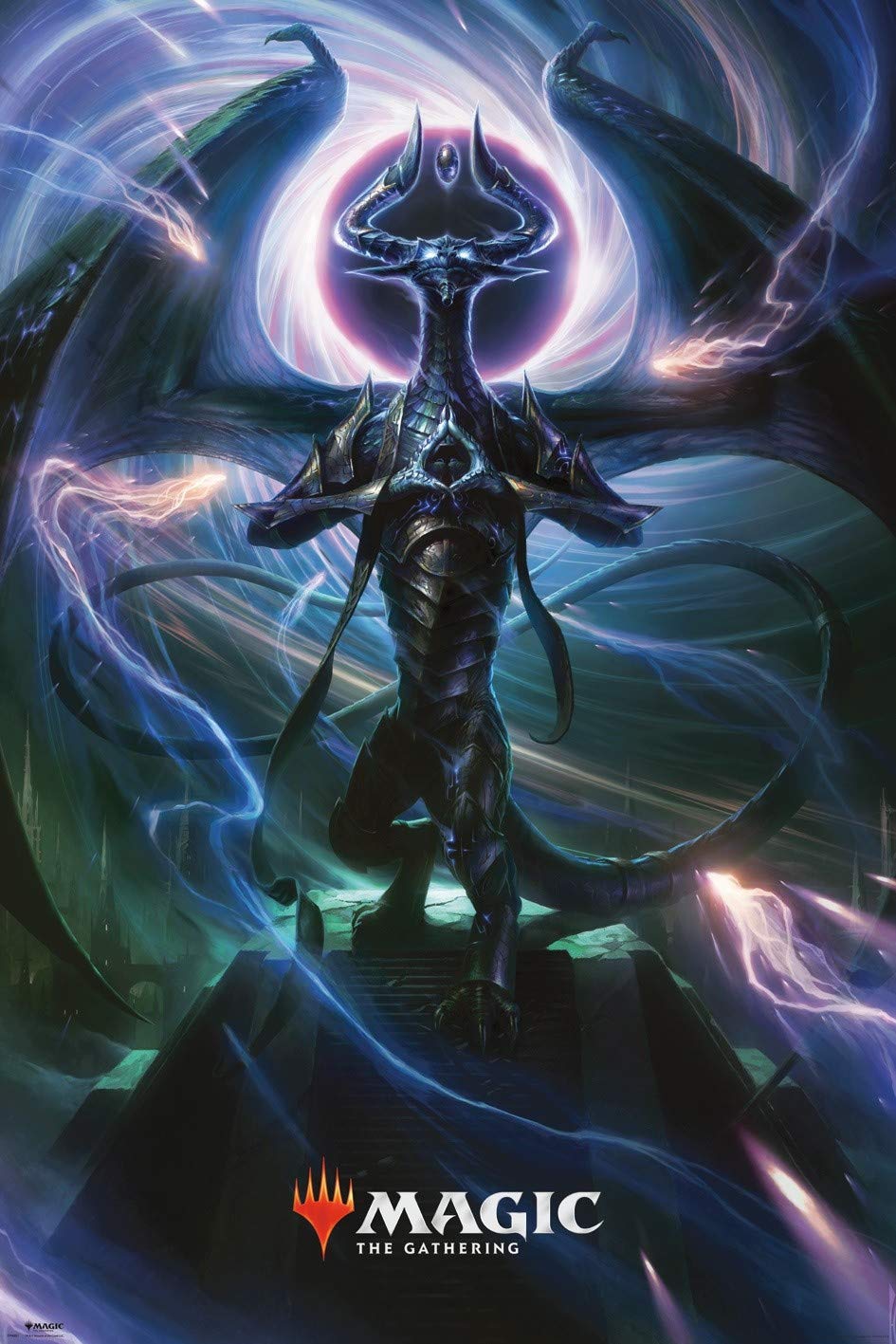 What do you make of this outrage? Do you agree or disagree with his addition to the game? Let us know on social media or in the comments down below!