The Mandalorian animation director Hal Hickel recently implied that the premier episode of The Mandalorian Season 2 is undoing The Rise of Skywalker.

During The Mandalorian Season 2 Episode 1 “The Marshall” an astute fan discovered that during the flashback scene showing the destruction of the second Death Star, the text around the exploding Death Star reads, “Little does Luke know that the Galactic Empire has secretly begun construction on a new armored space station even more powerful than the first dreaded Death Star.” 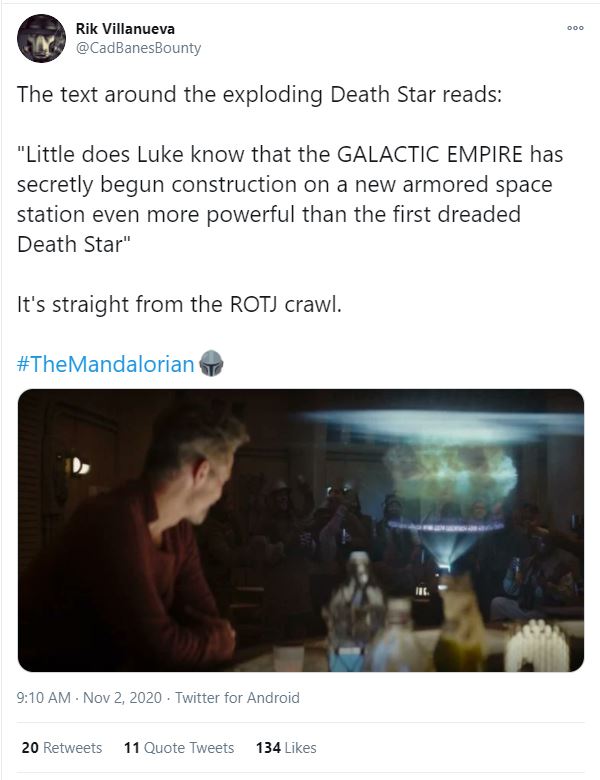 The fan rightly pointed out this was from the opening crawl in The Return of the Jedi.

The fan would then inquire as to why and how the text was used to both Lucasfilm creative art manager Phil Szostak and Lucasfilm story group member Matt Martin.

Szostak would respond, “That’s undoubtedly an ILMVFX element so I’m sure the text is just there as a fun Easter egg.” He then asked Hal Hickel to comment.

Another fan would then ask, “Who filmed the Death Star blowing up? And how come there’s no debris left, but there’s some debris leftover in The Rise of Skywalker?”

Hickel then responded, “Dunno who filmed it. As for the second question, it looks that way because we were matching Jedi.” 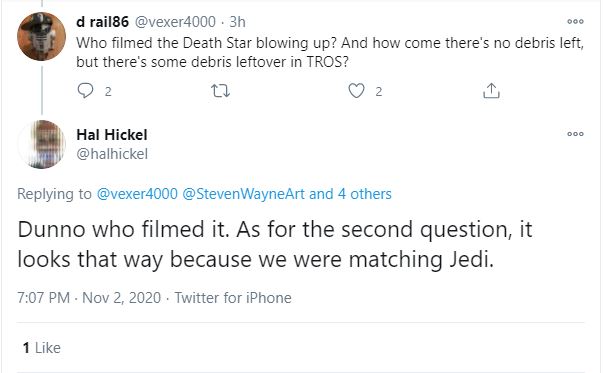 If indeed they are matching The Return of the Jedi then that would imply that the second Death Star was completely destroyed in space and there were no parts left to crash on Kef Bir in The Rise of Skywalker.

Twitter user StevenWayneArt would point this out writing, “You were matching Return of the Jedi, but you contradicted The Rise of Skywalker. Was that intentional?” 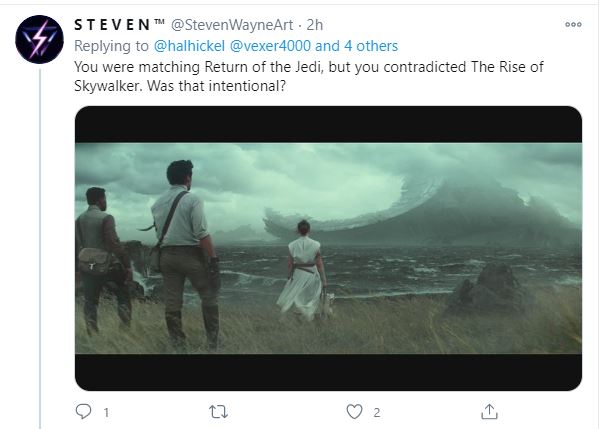 Hickel has so far not commented further. But the implication appears to be clear.

While the implication that The Mandalorian might be undoing the events of The Rise of Skywalker is welcome news, the actual inclusion of the opening crawl to Return of the Jedi and the video footage of the Death Star being blown up provides its own problems.

Finally, who was actually recording the footage of the Death Star being blown up? Was it The Emperor? It’s possible the footage could have been created by some kind of Empire film crew hoping to capture the destruction of the Rebel Alliance.

However, that theory doesn’t really make sense given the footage was being broadcast in a celebratory manner in the flashback scene from The Mandalorian. It’s hard to imagine an Empire film crew using that footage to promote a major Rebel victory.

Another possible theory is that it’s footage from the Rebel Alliance. However, that theory runs into its own problems. How are they able to broadcast that message when the Empire is still in control over most of the galaxy through their regional governors.

A third theory could even be that it’s just some kind of independent film crew that discovered the Battle of Endor was going to happen and decided to film part of it. But this theory still runs into the problem of how the footage gets broadcast throughout the galaxy especially to a remote planet in the Outer Rim like Tatooine.