First reported by Itchy Bacca at Disney Star Wars Is Dumb, Lucas details that his real reasons for selling Lucasfilm in 2012 were his commitments to his family.

Lucas tells Paul Duncan, “At that time I was starting the next trilogy; I talked to the actors and I was starting to gear up. I was also about to have a daughter with my wife. It takes 10 years to make a trilogy – Episodes I to III took from 1995 to 2005.”

The Star Wars creator continued, “I’d still be working on Episode IX! In 2012 I was 69. So the question was am I going to keep doing this the rest of my life? Do I want to go through this again? Finally, I decided I’d rather raise my daughter and enjoy life for a while.” 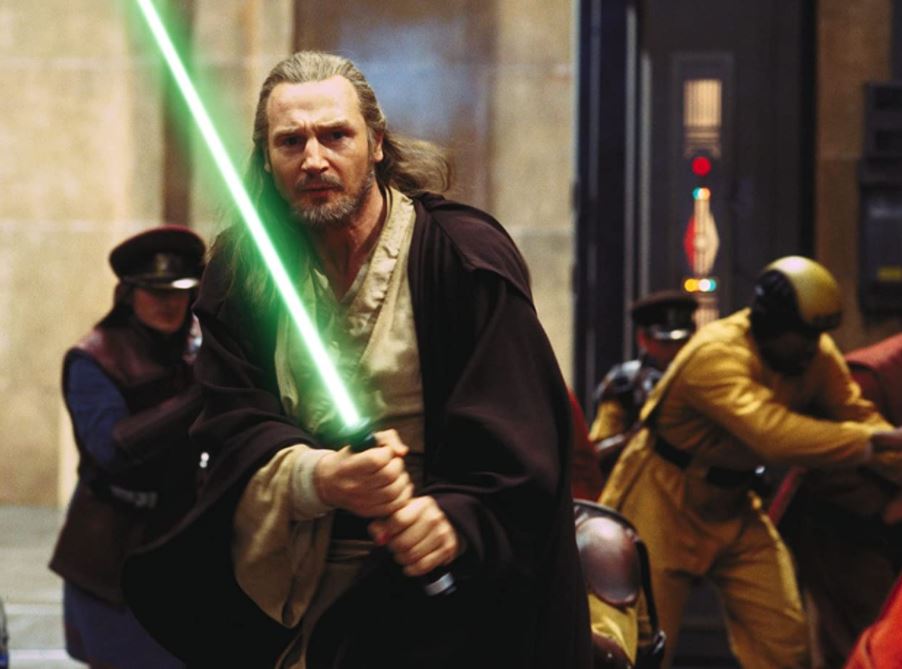 “I could have not sold Lucasfilm and gotten somebody to run the productions, but that isn’t retiring. On The Empire Strikes Back and Return of the Jedi I tried to stay out of the way but I couldn’t. I was there every day,” he continued.

Lucas went on, “Even though the people were friends of mine and they did great work, it wasn’t the same as me doing it. It was like being once removed.  I knew that probably wouldn’t work again, that I’d be frustrated.”

He went on to detail his work habits and how not selling would stand in the way of his goal of raising his daughter.

Lucas explained, “I’m one of those micromanger guys and I can’t help it. So I figured I would forgo that, enjoy what I had and I was looking forward to raising my daughter.”

Lucas then revealed how painful selling Star Wars was. He stated, “I’ve spent my life creating Star Wars – 40 years – and giving it up was very, very painful. But it was the right thing to do.”

He then reinforced the fact that he thought he would be more involved in the sequel trilogy, but Disney went a different direction.

Lucas stated, “I thought I was going to have a little bit more to say about the next three because I’d already started them, but they decided they wanted to do something else.”

“Things don’t always work the way you want it. Life is like that,” the Star Wars creator concluded. 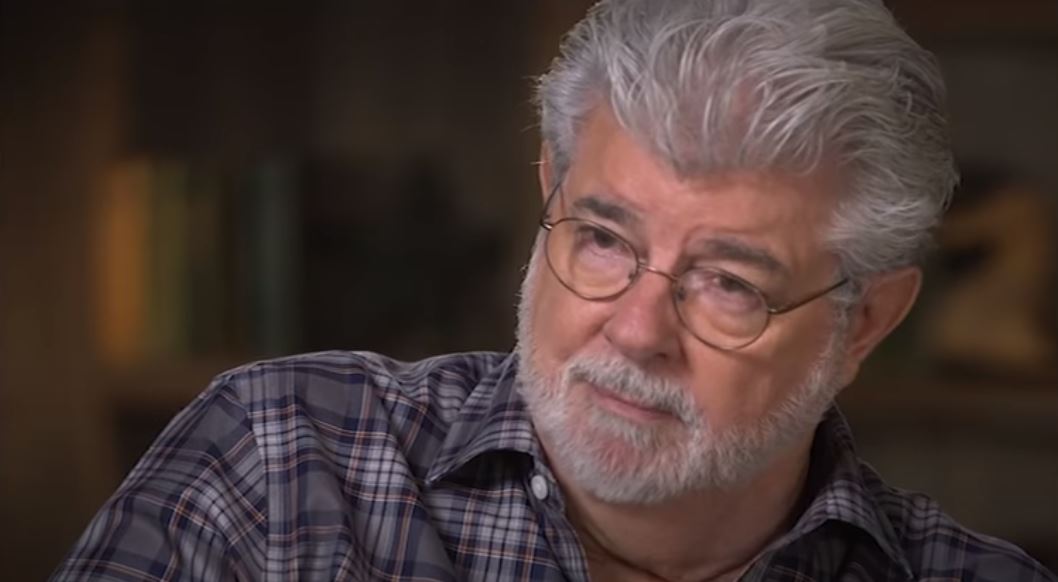 Lucas’ comments reinforce the fact that Pablo Hidalgo’s recently released Star Wars: Fascinating Facts book that claims Lucas had Luke Skywalker die in Episode VIII and that Lucas had originally envisioned Kylo Ren, Rey, Finn, and Poe Dameron are nothing more than his own pipe dream.

In Hidalgo’s book he writes, “Years before The Last Jedi began development, the treatment left behind by George Lucas in 2012 also had Episode VIII be the one wherein Luke Skywalker would die.” 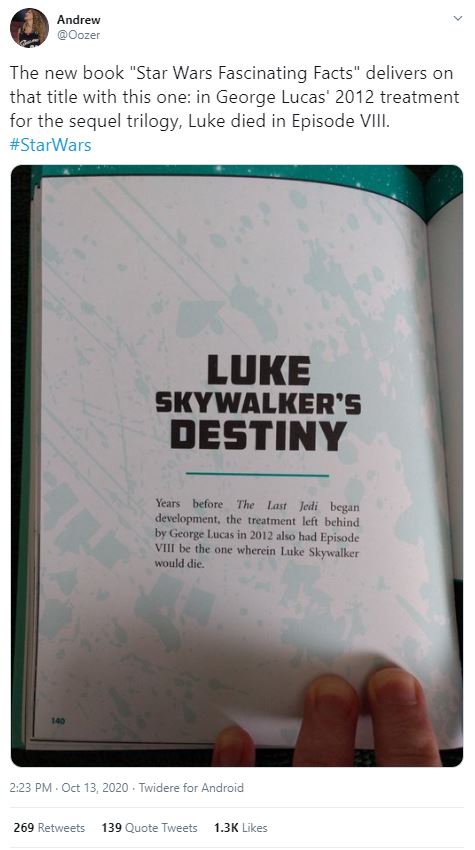 As for Rey, Finn, Kylo Ren, and Poe he wrote, “The Force Awakens’ long journey from idea to finished film was filled with evolution, but one idea that remained constant from the start was that of a young woman’s quest to become a Jedi Knight.”

“In George Lucas’ original outline, she was a 14-year-old girl named Taryn. In his subsequent iterations, she would briefly be named Thea and – believe it or not – Winkie. When writer/director J.J. Abrams came aboard, he simplified the names to placeholders,” Hidalgo added.

He then stated, “Kylo Ren was Jedi Killer. Thea became Sally. Finn was called Harry. And the character that would be Poe was John Doe. As the film neared production, Sally became Kira (which stuck as a production code name), then Echo, and finally Rey.” 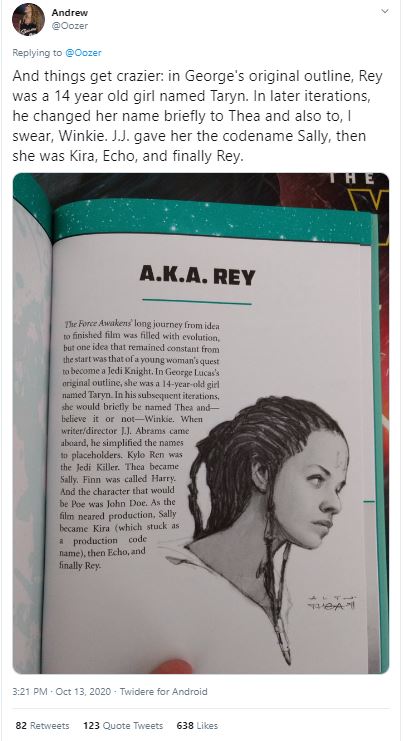 However, Lucas makes it clear that Disney “decided they wanted to do something else.”

In fact, Lucas had previously detailed to James Cameron that he aimed to explore a microbiotic world and explore more of The Whills.

He stated, “[The next three Star Wars films] were going to get into a microbiotic world. But there’s this world of creatures that operate differently than we do. I call them the Whills. And the Whills are the ones who actually control the universe. They feed off the Force.” 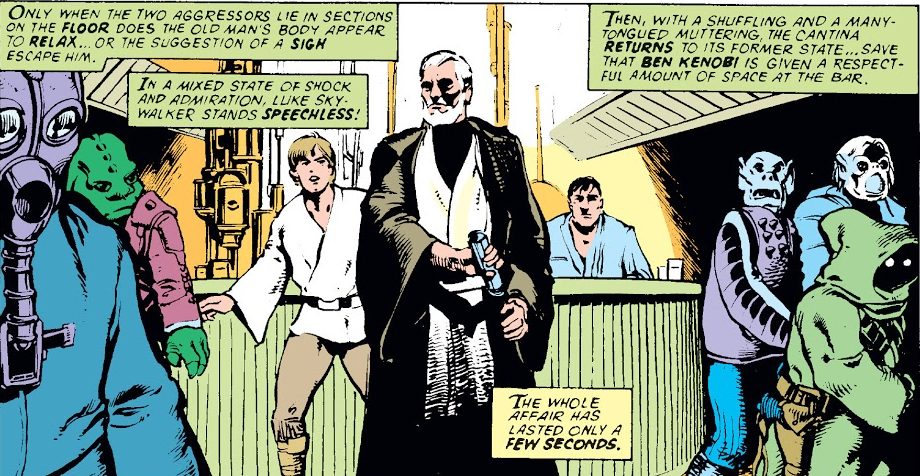 Lucas added, “Back in the day, I used to say ultimately what this means is we were just cars, vehicles for the Whills to travel around in … We’re vessels for them. And the conduit is the midi-chlorians. The midi-chlorians are the ones that communicate with the Whills. The Whills, in a general sense, they are the Force.”

Lucas also provided more details about his trilogy plans in the Star Wars Archive book. Those details included Darth Maul and Darth Talon, Luke rebuilding the Jedi Order from the survivors of Order 66, and Leia forming the New Republic. 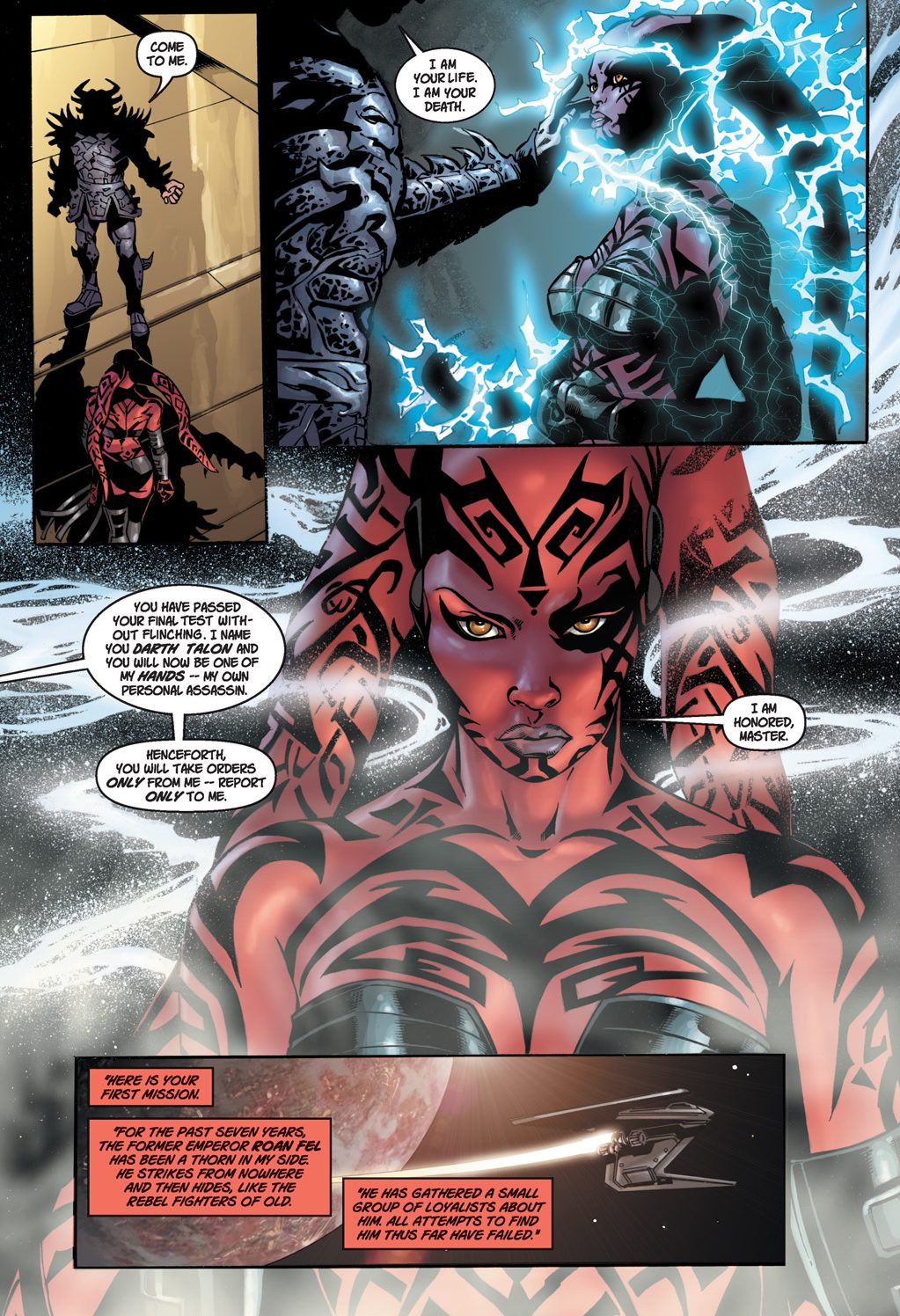 Not only that, but Hidalgo’s claim was already previously contradicted by Mark Hamill who stated back in 2018, “I happen to know that George didn’t kill Luke until the end of [Episode] 9, after he trained Leia. Which is another thread that was never played upon [in The Last Jedi].”

Hamill also revealed that Lucas had written an overall arc for the trilogy, something Disney did not do. 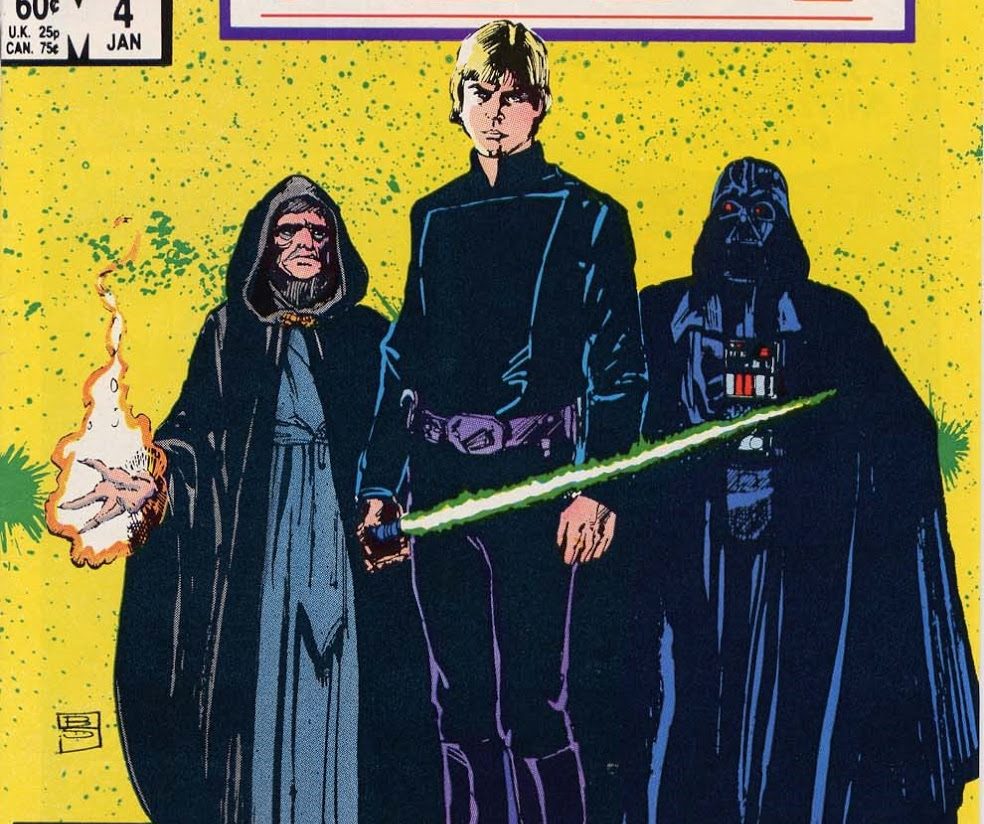 Lucas wasn’t the only one to claim that Disney went a different direction from his original ideas. Former Disney CEO and current Chairman Bob Iger also revealed that George felt betrayed by Disney because they didn’t use his original treatment.

He wrote in his memoir, The Ride of a Lifetime: Lessons Learned From 15 Years as CEO of the Walt Disney Company, “George immediately got upset as they began to describe the plot and it dawned on him that we weren’t using one of the stories he submitted during the negotiations.” 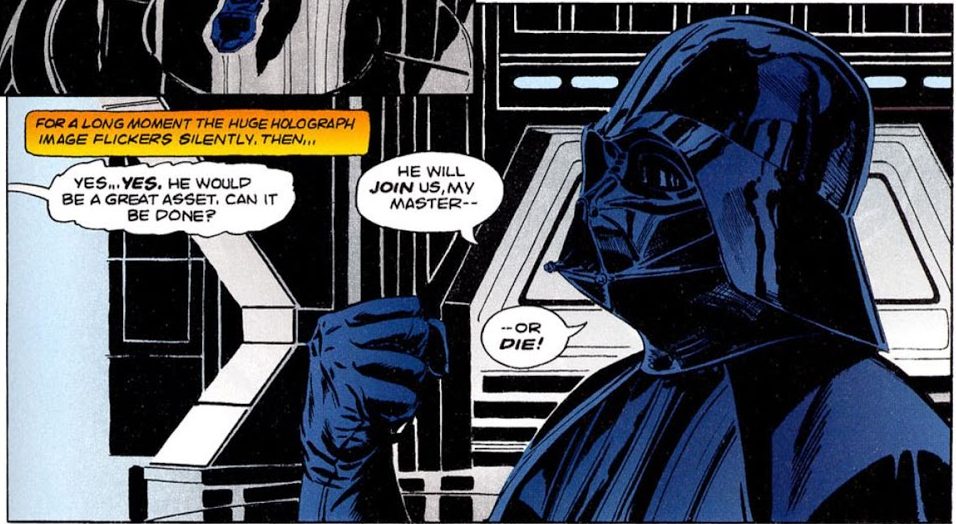 Iger continued, “George knew we weren’t contractually bound to anything, but he thought that our buying the story treatments was a tacit promise that we’d follow them, and he was disappointed that his story was being discarded.”

He then stated, “I’d been so careful since our first conversation not to mislead him in any way, and I didn’t think I had now, but I could have handled it better.”

“George felt betrayed, and while this whole process would never have been easy for him, we’d gotten off to an unnecessarily rocky start,” Iger concluded. 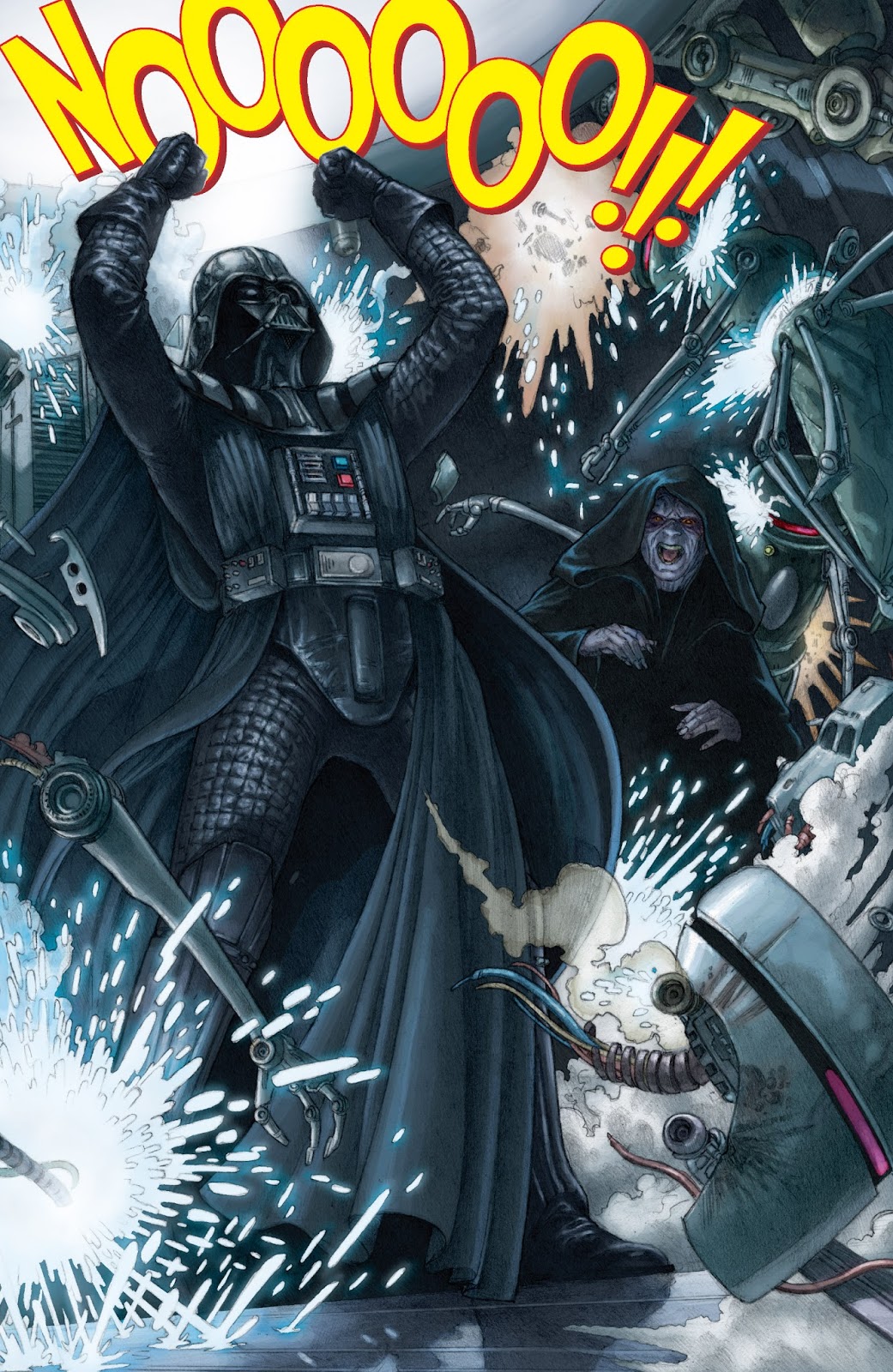 Abrams detailed in 2015, “I came on board and Disney had already decided they didn’t want to go that direction, so the mandate was to start from scratch and tell a story that was the continuum… And Kathleen Kennedy brought on Larry Kasdan and Michael Arndt, and it was those people I began working with.”

What do you make of this recent revelation from George Lucas about why he sold Lucasfilm?