CD Projekt Red has once again drawn the ire of video game news outlets, as media journalists have begun to complain that the studio refused to provide them with preferential treatment regarding early review copies of the studio’s new release, Cyberpunk 2077. 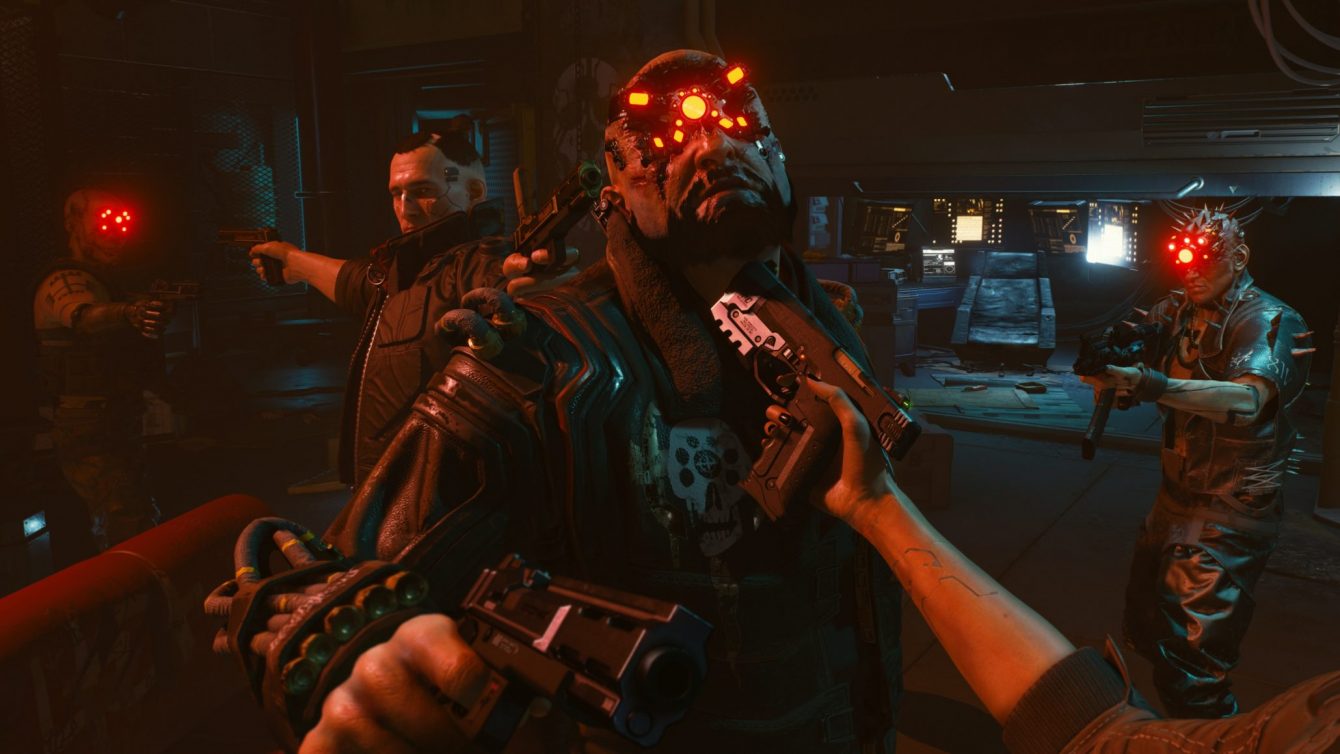 With the game’s final release date slated for December 10th, this past week has seen multiple video game news sources, ranging from traditional journalism outlets to individual internet influencers, begin to get their hands on Cyberpunk 2077, arguably one of, if not the, most anticipated games of the year.

While individual reception dates varied, most outlets and influencers received their game with a little over a week’s time to play and review the game before it released to general audiences. 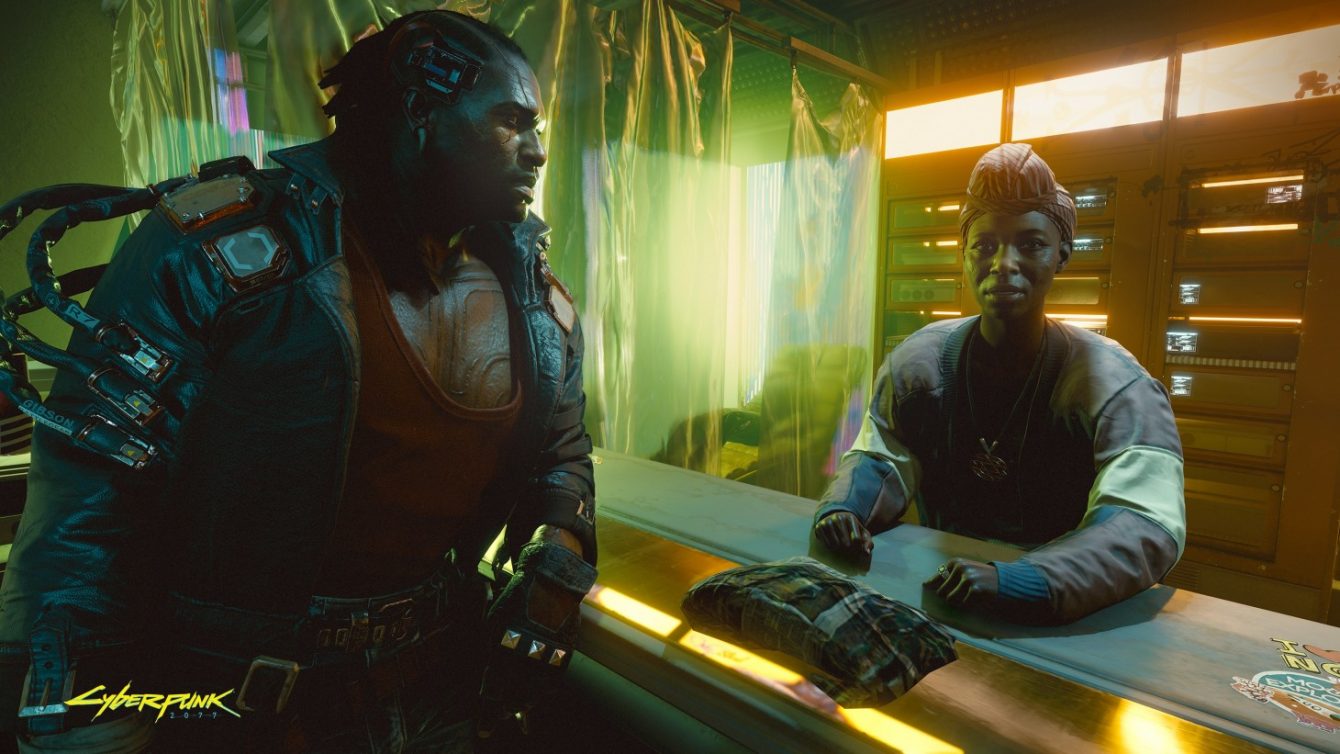 Some journalists, who believed that they should be allowed more time to experience the game, deemed CD Projekt Red’s withholding of the game from mainstream outlets as unacceptable and found themselves unable to comprehend just why the studio may have opted to explore alternative marketing outlets.

One of the first tweets on the subject was made by Uppercut! founder Ty Galiz-Rowe, who voiced their frustrations by asserting that “the fact that influencers are getting custom care packages to be more free marketing for Cyberpunk, while those reviewers who will likely take this game to task still haven’t gotten code for a giant f***ing game is honestly emblematic of why we don’t trust influencers.” 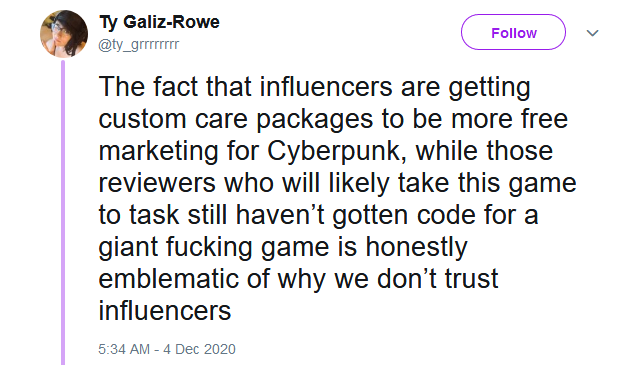 “This is not to say that influencers inherently *can’t* be critical of those they partner with, but it’s hard to believe that when the partnership between the company & them is so apparent while critics & even GUIDES WRITERS are getting shut out til the last minute,” they added. 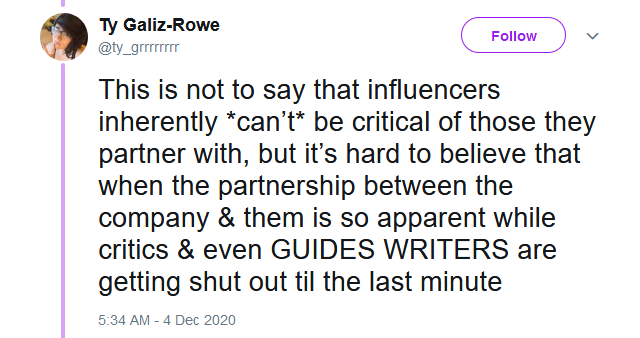 In response to Esports commentator Tom Pickering, who pointed out that “Influencers are worth more to publishers, bigger reach more often than not…and a lot of people don’t trust reviewers,” Galize-Rowe ordered them to “get this gamer gate s*** out of my mentions.” 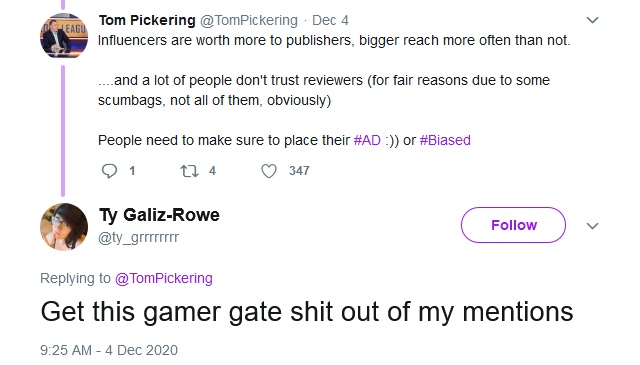 Galiz-Rowe’s tweet was soon retweeted by Rock Paper Shotgun co-founder John Walker, who complained how “after decades of attempting to wrangle the gaming press into something that does their marketing for them, publishers have instead had their dreams come true in the form of ‘influencers.’” 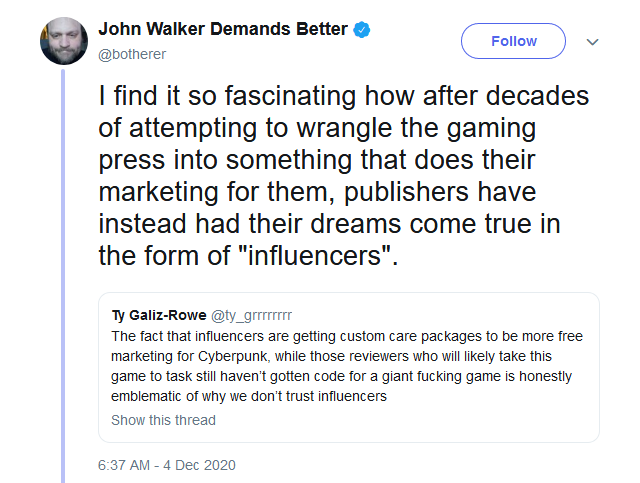 “It turned out to be incredibly difficult to buy off the gaming press,” added Walker, failing to remember how easily outlets such as his own will jump to praise any developer or game that professes critical race or social justice rhetoric.

He continued, “Then along came a whole new Thing, a creepy facsimile of a gaming enthusiast press, that not only CAN be bought, but openly boasts about it as they tell people how wonderful the product is!” 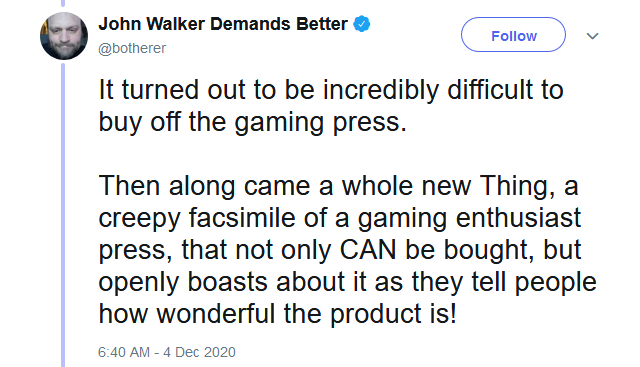 Without a hint of irony, Walker then asked “So why the hell would you send your game to the press, who will likely tell the truth, when you can instead pay some shiny-faced cherub to say whatever you want?”

Natalie Flores, a featured contributor for Fanbyte, warned that the short review window would have drastically negative effects on the “physical and mental state [of journalists] as they try to meet embargo.”

“They’ll tell you that they’re dead,” exclaimed Flores, who locked her Twitter account before a proper archive of her tweet could be made. “They’re not even mentioning the fact that they’re technically the lucky ones. so many will be crunching all of December.” 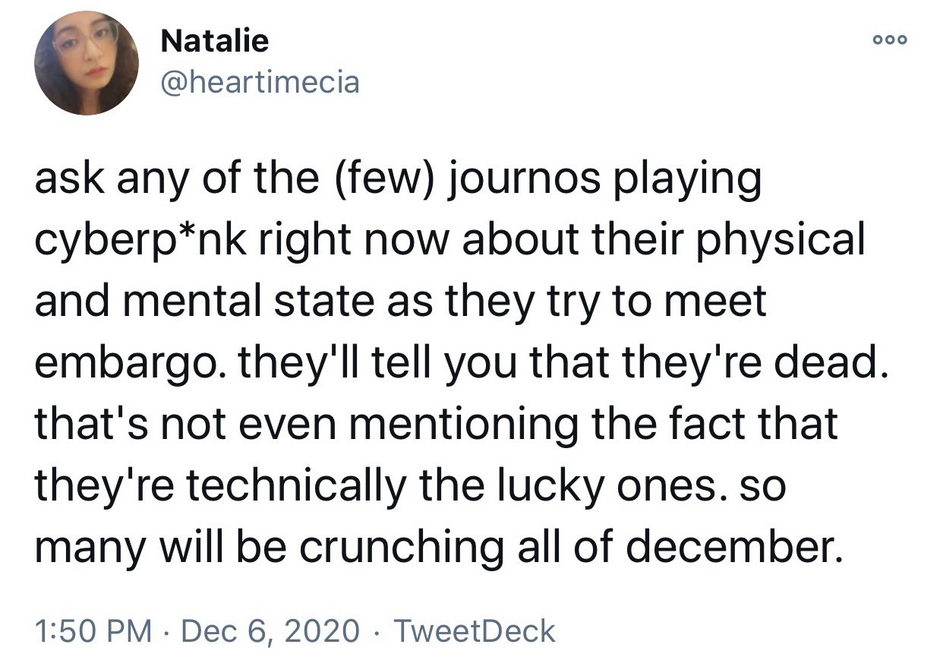 It’s curious that these journalists cannot fathom why the studio may be hesitant to engage with them on anything more than an industry-professional level, considering how these past few months have seen numerous outlets and personalities take issue with and create hit pieces concerning almost every element of Cyberpunk 2077, sometimes even ignoring the context of the game’s entire setting in order to justify their outrage. 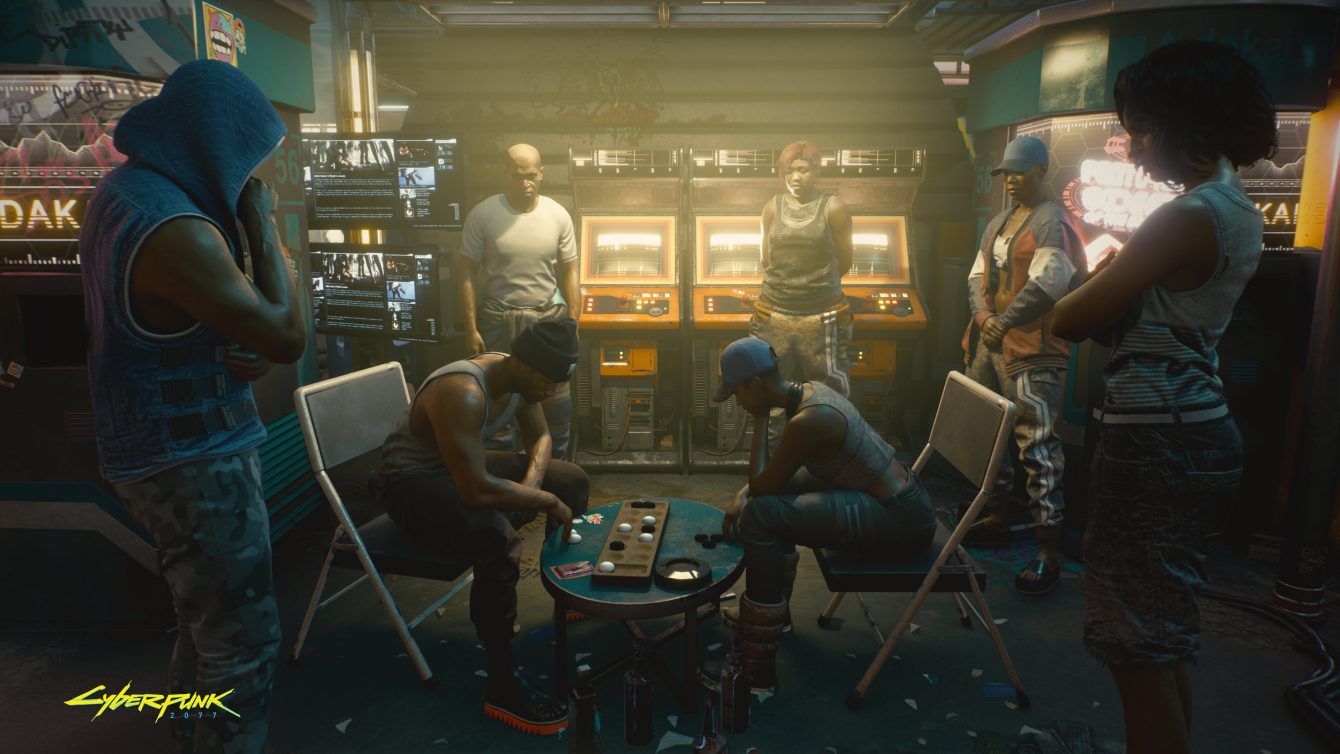 Between Lead Quest Designer Paweł Sasko’s explicit denial that the game would be influenced by Black Lives Matter, to accusations of transphobia over a single “Did you just assume their gender?” joke, Cyberpunk 2077 has been the favorite scapegoat for game journalists to project their own personal pet issues on to.

For the most egregious example of this projection, look no further than the now-infamous controversy surrounding one of the game’s in-game advertisements for the fictional beverage Chromanticore, whose billboard features a woman with a prominently displayed set of male genitalia adorned with the slogan “Mix it up”. 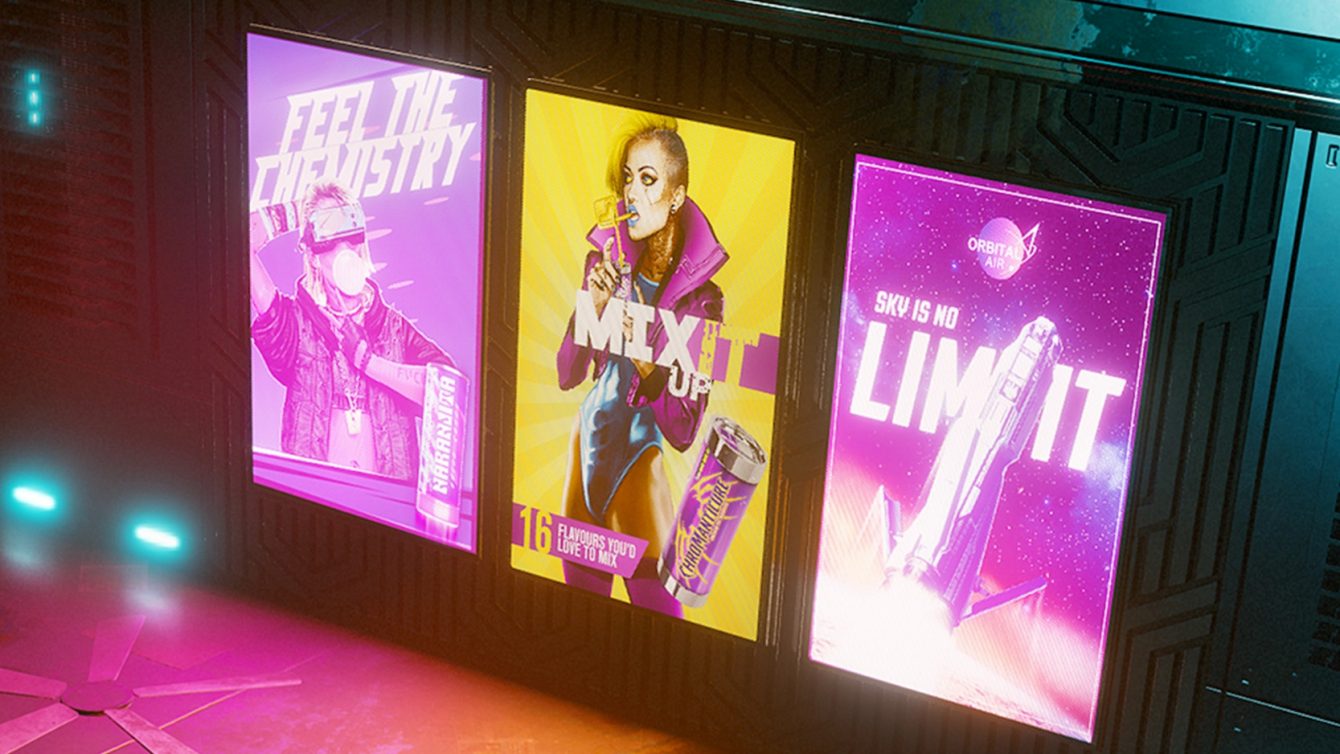 Immediately upon its previewing to the public, CDPR faced an enormous wave of backlash, with most of the outrage based on the assumption by critics that the advertisement was a commentary on contemporary transgender sociopolitical issues.

This, of course, ignores the entire setting of Cyberpunk 2077, not to mention the entire concept of the term ‘Cyberpunk.’ The cities and worlds featured in this genre of the story are not put forth as shining utopias of progress, but rather desolate, downtrodden places where advanced technology has become a standard part of people’s lives.

As such, despite such elements being controversial in the real-world, it would not be surprising in such a setting to see gender and sexual identity commodified and sold for profit as commentary on the evils of corporate exploitation. 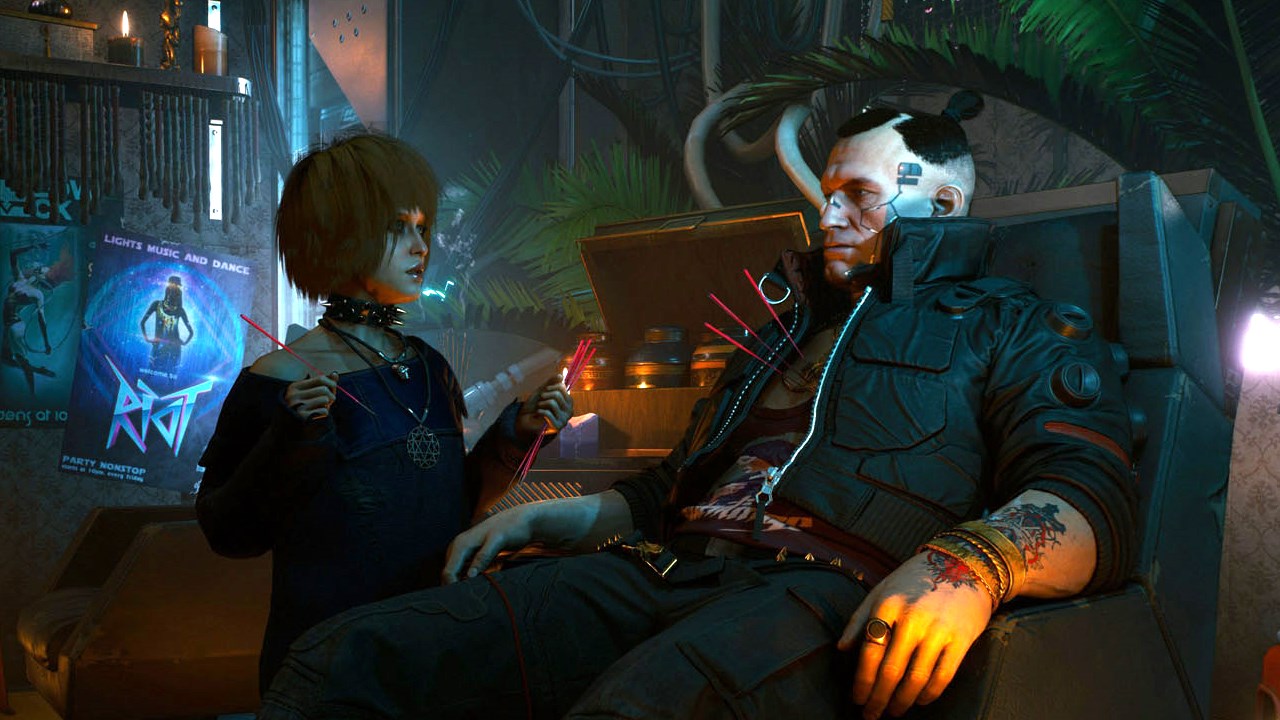 This disconnect between video game journalists and the reality of the industry is no more apparent than in Polygon’s review of the title, where author Carolyn Petit spends the first seven-paragraphs of the piece (a total 43% of the review) taking issue with how the game fails to “humanize trans identities.”

“There’s real potential for a grim world like the one Cyberpunk 2077 offers to serve as a lens through which our own world is critiqued, but the developers at CD Projekt Red failed to do anything with the trans options and identities they incorporated into the game to make them function in this way, and as V, you never have the option to say or do anything about it,” laments Petit. “The objectification of trans people is just background texture, nothing more.” 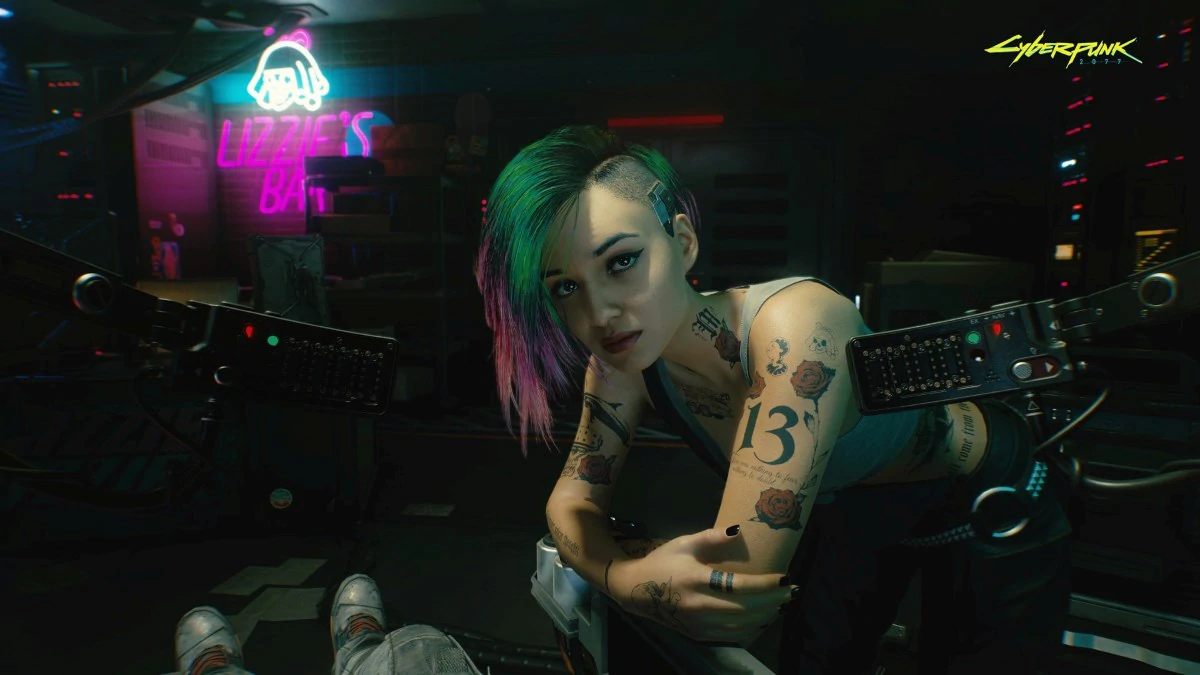 Petit’s review was later praised by her Feminist Frequency co-host Anita Sarkeesian, who drew attention to how “even just a few years ago we would never have had a mainstream review of a mainstream AAA game that dedicates the opening SEVEN paragraphs to the game’s success or failure at trans representation.”

“That’s not nothing,” she concluded. 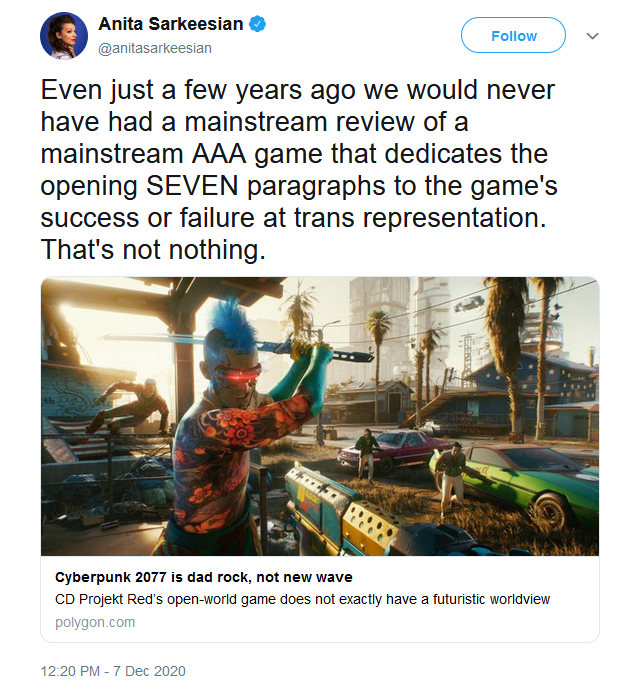 Cyberpunk 2077 releases on PlayStation 4, Xbox One, Google Stadia, and PC platforms on December 10th, with a next gen version for the PlayStation 5 and Xbox Series X/S dropping sometime in 2021.

What do you make of his discourse? Let us know your thoughts on social media or in the comments down below!