Lucasfilm concept artist Paul Bateman has become the first individual related to the Star Wars franchise to address the fan confusion regarding the production of The Mandalorian and The Book of Boba Fett. 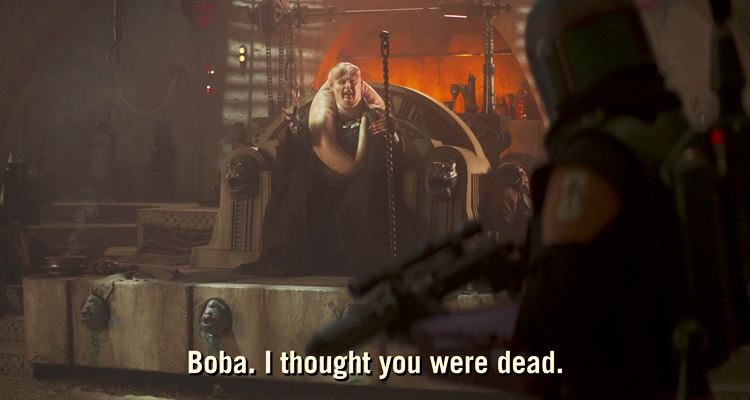 From Din and Boba’s team-up with Bo-Katan to the action-packed return of  Luke Skywalker, the season finale of The Mandalorian held a number of surprises for long-time fans of the Star Wars universe.

Yet, for many, the most unexpected moment of the finale came after the credits rolled, when an unannounced scene featuring Boba Fett and Ming-Na Wen’s Fennec Shand forcefully taking control of Jabba’s Tattooine palace revealed itself to be a teaser for an upcoming series titled ‘The Book of Boba Fett’.

With the declaration from the episode’s final title card that the iconic bounty hunter’s story would premiere in December 2021, the same tentative release date as the next season of The Mandalorian’s third season, fans began to wonder if The Book of Boba Fett would exist as a separate spin-off or serve as the third season of the popular Disney+ series. 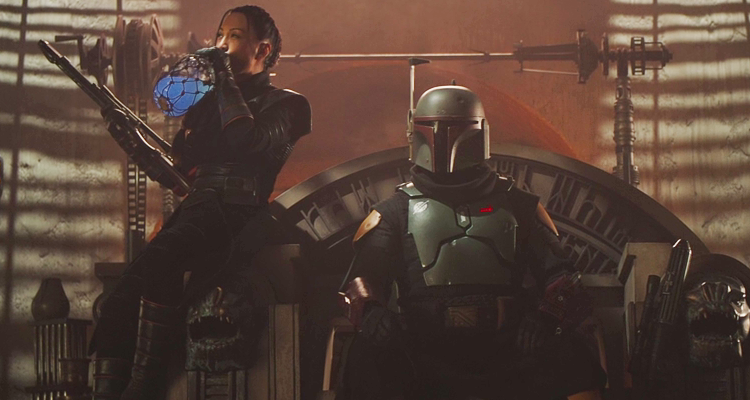 Related: Here’s The Latest Rumor On What Star Wars Has Planned Following The Conclusion Of The Mandalorian Season 2

As confusion began to grow, Bateman announced on his personal Twitter account that “Season 3 of The Mandalorian and ‘The Book of You Know Who’ are two different shows”, assuring fans “You’re getting both. Trust me on this one ;)”

However, this initial clarification was quickly deleted by Bateman, and though its deletion was done before a proper screenshot could be taken, an unformatted archive of the aforementioned tweet can be viewed here.

Related: Pedro Pascal Responds To Rumors About Him Being Disgruntled On The Mandalorian

In a series of follow-up tweets, Bateman would explain the reasoning behind his initial statement, though not before reminding fans that “until clarity comes from the horses mouth, (hopefully soon), I don’t officially represent Lucasfilm when it comes to this kind of thing.”

Related: Pedro Pascal’s Din Djarin Might Get Sidelined In Favor Of Boba Fett For The Mandalorian Season 3

“As I understand it,” then wrote Bateman, “#thebookofbobafett and #TheMandalorian Season 3 have differing shooting schedules, despite potentially releasing around the same date, in addition Pedro Pascal has confirmed he’s signed aboard for the third season.” 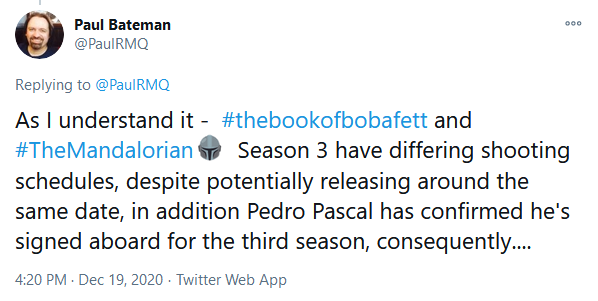 Given these facts, Bateman finally noted that “it’s a very understandable conclusion to reach  that it’s much more likely we’re talking about 2 entirely different shows than not.”

As of writing, neither Disney nor any other Lucasfilm representative has offered any clarification on the production status of The Mandalorian and The Book of Boba Fett.

What do you make of Bateman’s conclusions? Let us know your thoughts on social media or in the comments down below!