Before providing details on what he’s got in the cooker, Dixon provided some background information regarding Arkhaven Comics.

He explained, “Well, Arkhaven Comics grew out of another publishing house called Castalia House, which publishes novels. Mostly it was the brain child of Vox Day.”

“Vox Day, international man of mystery, who is an author in his own right, publisher, entrepreneur, musician, game designer, wine snob. He’s now into book binding. There is nothing this guy doesn’t succeed at when he turns his mind to it,” Dixon continued.

He went on, “And he reached out to me to join his merry band to do basically a comic book imprint called Arkhaven. Mostly, he just said I need a lot of content and we’ve got a lot of ideas and we want to explore different avenues of delivering comics to readers worldwide. Total thinking outside the box. And he also offered me autonomy, complete creative freedom.” 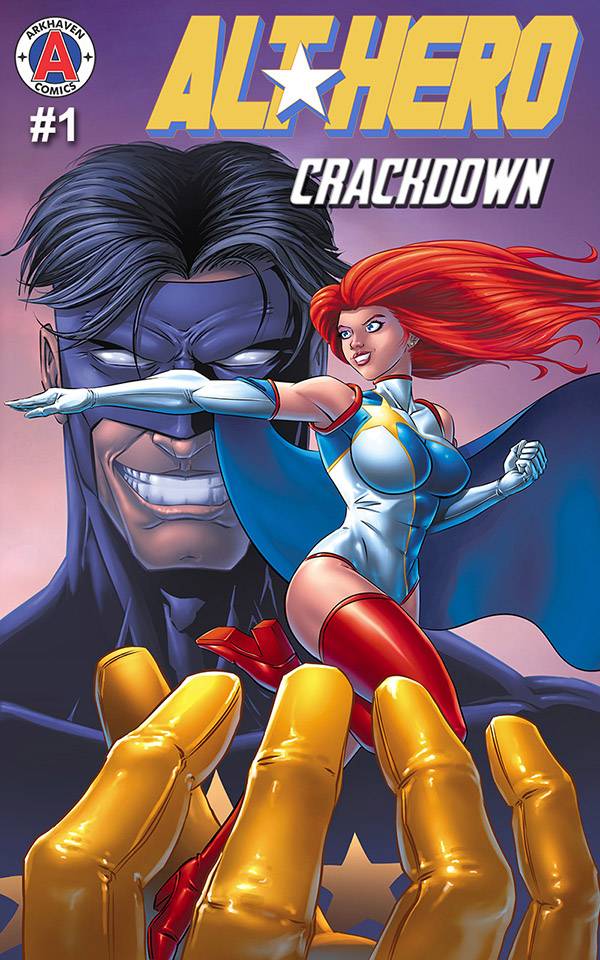 The former Batman writer said, “So, the first thing I got to work with on him was this book Avalon, which is sort of a spinoff from his Alt-Hero series and it takes place in the fictional New Jersey city of Avalon.”

He went on to describe Avalon, “And it gave me the opportunity to create my own Gotham and my own world of superheroes that wasn’t tied  to any long publishing history. I wasn’t tied to any continuity. I was creating a continuity as I went along. So I didn’t have to worry about illusion of change. I could warp, and bend, and change, and do whatever I wanted to these characters unlike when I worked on established superheroes. And I dove in with both feet.” 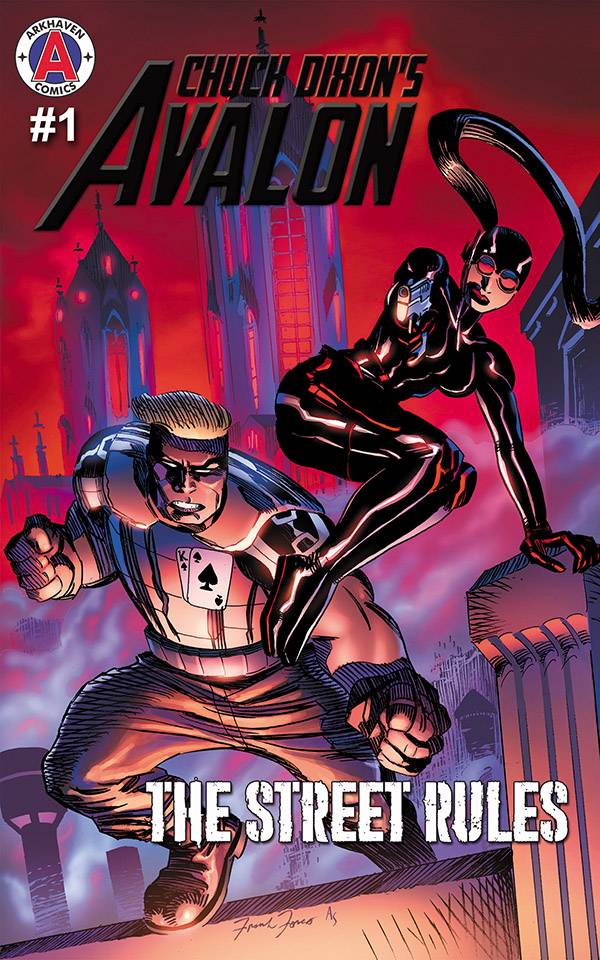 Dixon then revealed there will be more Avalon issues coming soon and that the original pitch for the series was a 12-issue maxiseries.

He explained, “I think there is only five or six issues out. All 12 issues of what was proposed as a maxiseries have been completed. The art is done. Everything else. I saw coloring on issue 12 just the other day. So the rest of the series is in the pipeline, coming along.

“It’s a lot of fun to work on. Working on my own superheroes, creating my own situations and scenarios. And also creating a 12-issue story with a beginning, middle, and end. I hope to return to the universe at some point. But Vox keeps throwing other stuff at me,” he added. 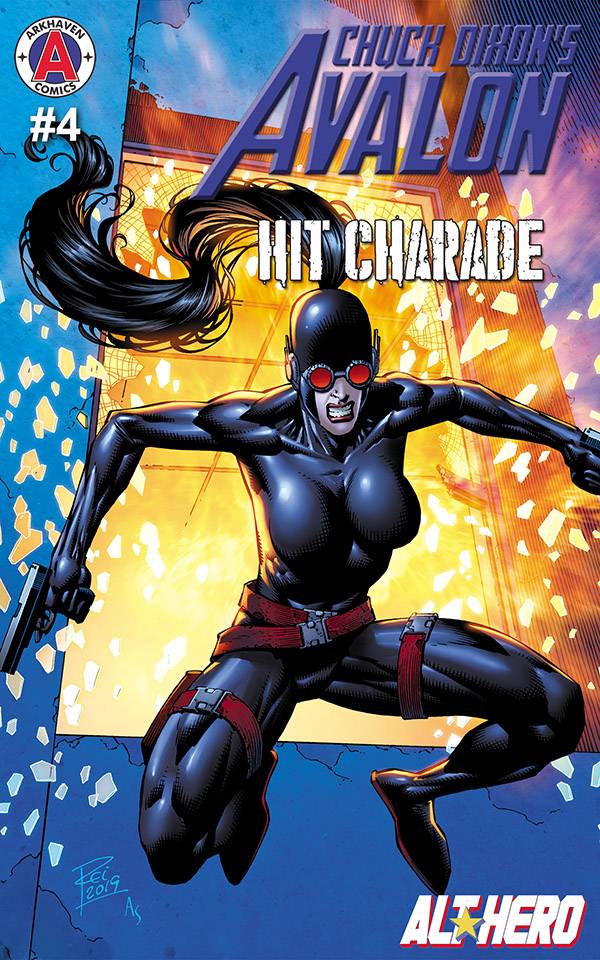 Dixon then went on to discuss some of the other projects he has in the works and shared some of the artwork.

“We are looking at doing a comic book app, much like WebToons. I’m doing a number of projects for that. The first one is Go Monster Go! And Go Monster Go is kind of a throwback retro 1960s Roger Corman movie. Kind of hot rod kids meet ghosts and monsters and aliens. Artwork by Tim Lattie,” he revealed.

Dixon elaborated, “This is a lot of fun to work on. It’s got a werewolf. It’s got alien invaders. It’s got an army base out in the middle of the California desert doing crazy experiments. There is a good deal of humor in it. But it’s kind of Big Daddy Ed Roth meets Roger Corman kind of thing. Lots of hot rod action with teenage guys and gals. Just a lot of retro fun. Early 60s fun. Tim is bringing it.

“And it’s been a lot of fun to work on. And my design is that it’s an ongoing digital comic that you can read on your phone that I intend to have go on for years and years and years. I’ve got tons of ideas for this,” he added.

Next, Dixon would discuss a spinoff series from Alt-Hero called The Shade. “Another series I’m working on spins out of Alt-Hero. Christopher McCullough and I are working on The Shade,” says Dixon.

“The Shade is to put it briefly, he’s kind of a Euro Batman. And like I said Batman is abusive and can be a bit of a bastard. The Shade is a total bastard. He’s a European aristocrat with a man on for a lot of people because he feels like his family was done harm by the European Union,” he continued.

Dixon elaborated, “And there is a lot of stuff going on. It’s a lot of fun to write. It’s a character created by Vox but I’ve kind of adopted him and taken him over. It’s very much a Batman and Robin kind of story with a Euro twist, a Euro crime twist. There’s a lot of art crime, stuff like that. It gets really, really wild at the end.”

Dixon says he’s already completed scripts for four issues and artwork is being completed on the third one and promises that the issues should be available to purchase soon. 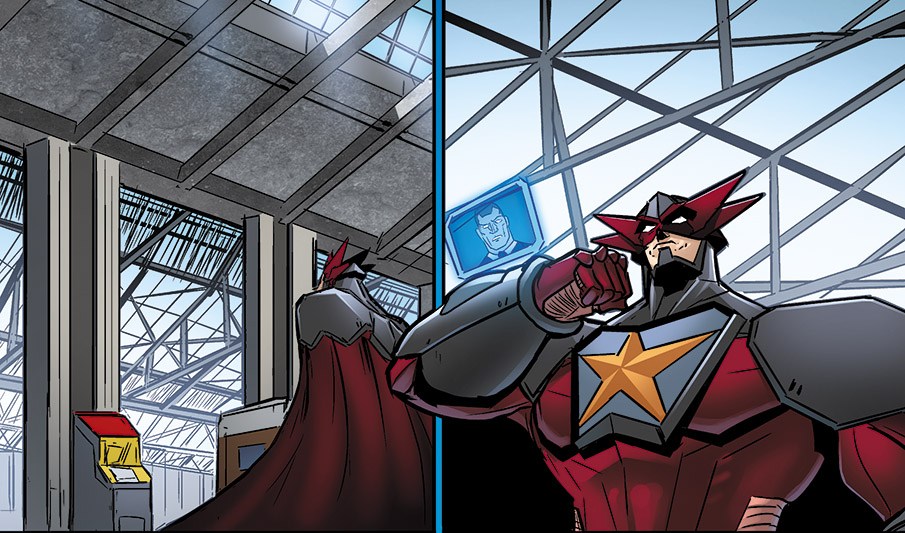 Dixon would go on to reveal that he’s also working on adapting a number of Vox Day’s novels into comic book and graphic novel format. He shared a number of completed art pages while stating, “I’m adapting some of Vox Day’s fantasy work into comic form, and it’s gorgeous.”

He went on, “I’m not really into fantasy, but I do like Vox’s fantasy. It’s well thought out. It’s interesting. It’s engaging. And as you can see a lot of it is set in a sort of Roman Empire kind of universe, which I dig a whole lot.”

Dixon did not provide details on which Vox Day books were getting adapted. 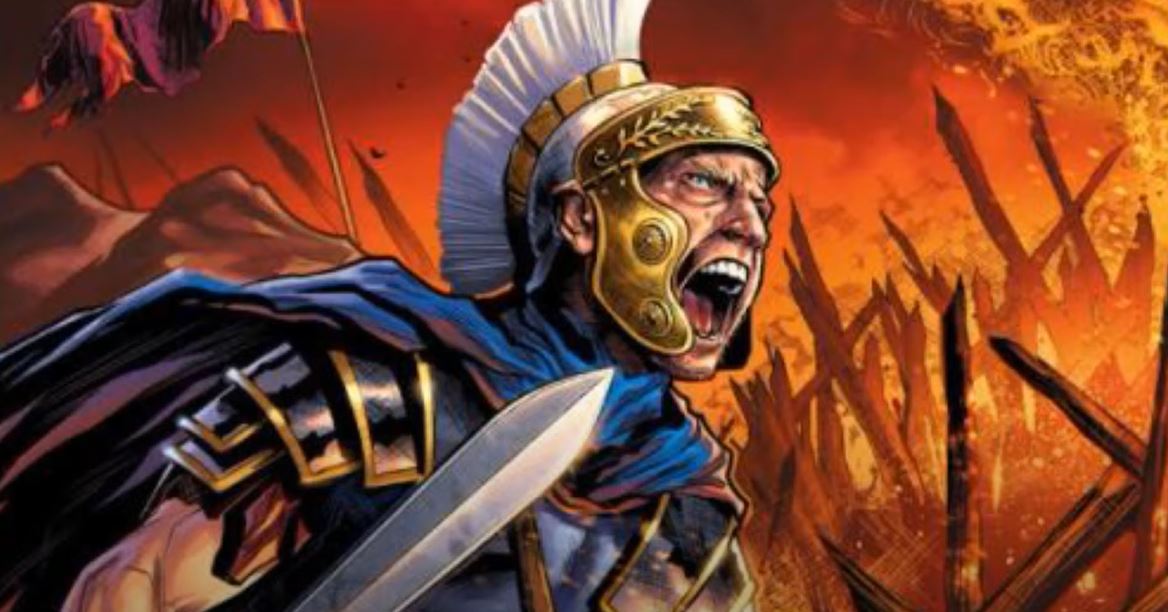 Next, Dixon gave an update on his Alt-Hero Q series. He explained, “Kind of a James Bond character, Roland Dane is a kind of James Bond character who works as an operative, an actual agent for Q, the mysterious internet presence that is into conspiracy theories of all kind that often eerily come true.”

He elaborated, “Roland Dane is a former Treasury agent, tough guy, and he is working to uncover some currency crimes happening in Europe as well as a missing shipment of nuclear-grade plutonium from North Korea. It’s high adventure stuff. I guess you call it Tom Clancy kind of world. But there’s a lot of humor.”

“And it gets a bit brutal at times. In fact a lot more brutal than Vox is comfortable with. My comics tend to be just a little bit more violent than he’s comfortable with, which I kind of enjoy that,” Dixon added. 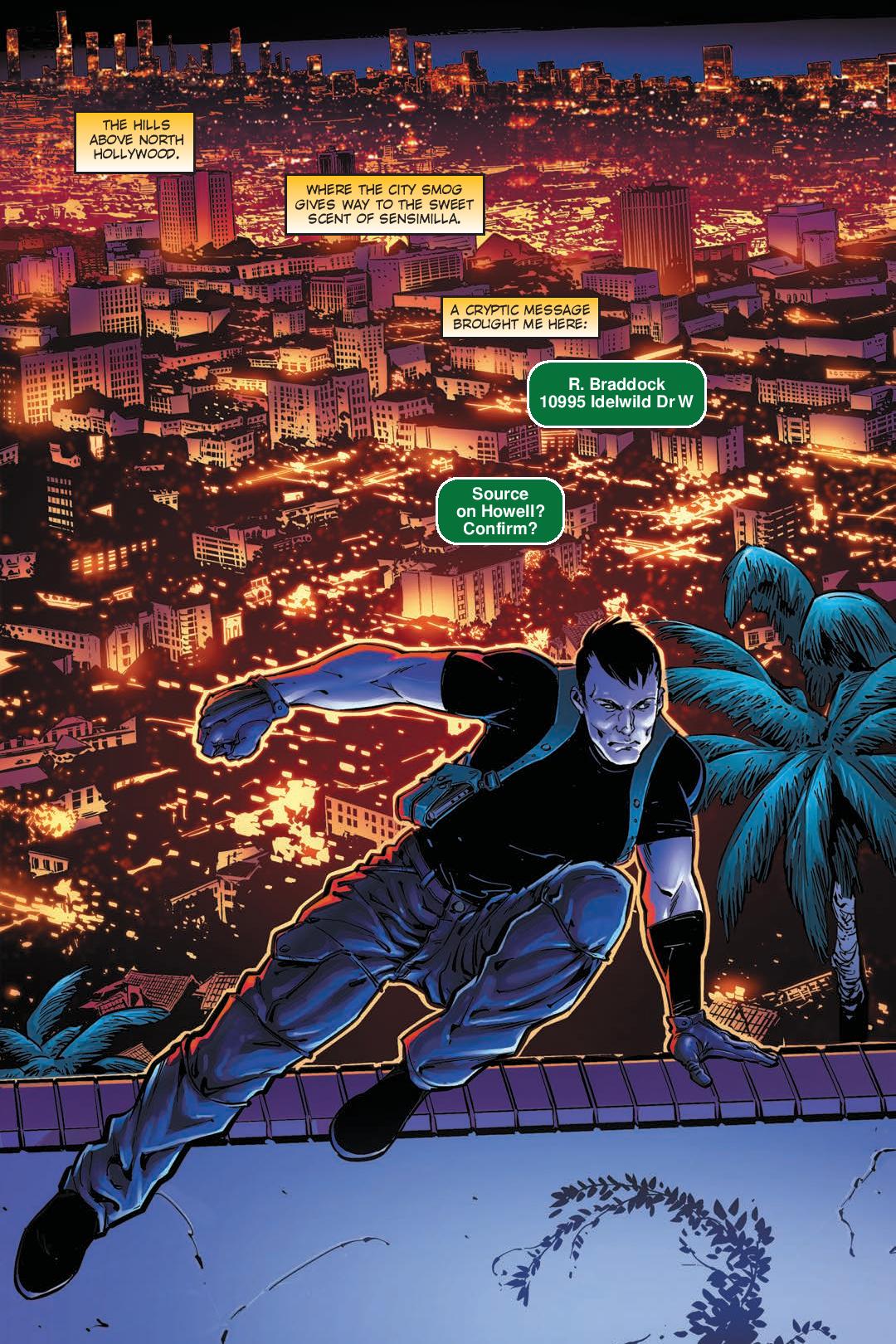 He then detailed he was working with Richard Bonk on another fantasy adaptation. Dixon would showcase some images from the project, but didn’t reveal the title explaining, “If you’ve read the work, you probably recognize it from these images, but I’m not going to tell you what it is because we haven’t announced it.”

He did go on to praise Bonk, “But Richard and I are pals and he’s doing some awesome work here. The work of his comic book career on this title. And it’ll be six issue mini series probably to be announced soon.” 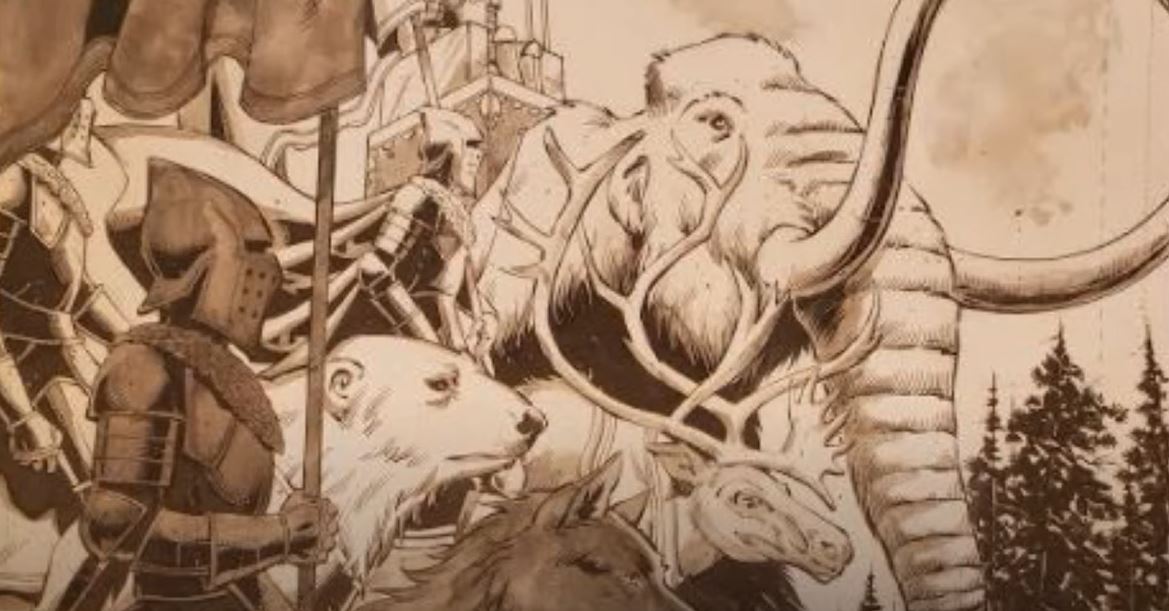 Next he revealed a project with Frank Fosco called Something Big. Dixon noted “This is like early days. We’ve really just begun on it.”

He went on to describe the story, “It’s an alien invasion story. Takes place 30 years after an alien invasion. The human race has kind of gotten used to the fact we lost the space war and we’re just gonna have to live with these creeps.”

“Takes place in Las Vegas and the Nevada desert. And it’s actually, ultimately a heist story. I hope you’re intrigued by that. I would be a science fiction heist story,” Dixon revealed. 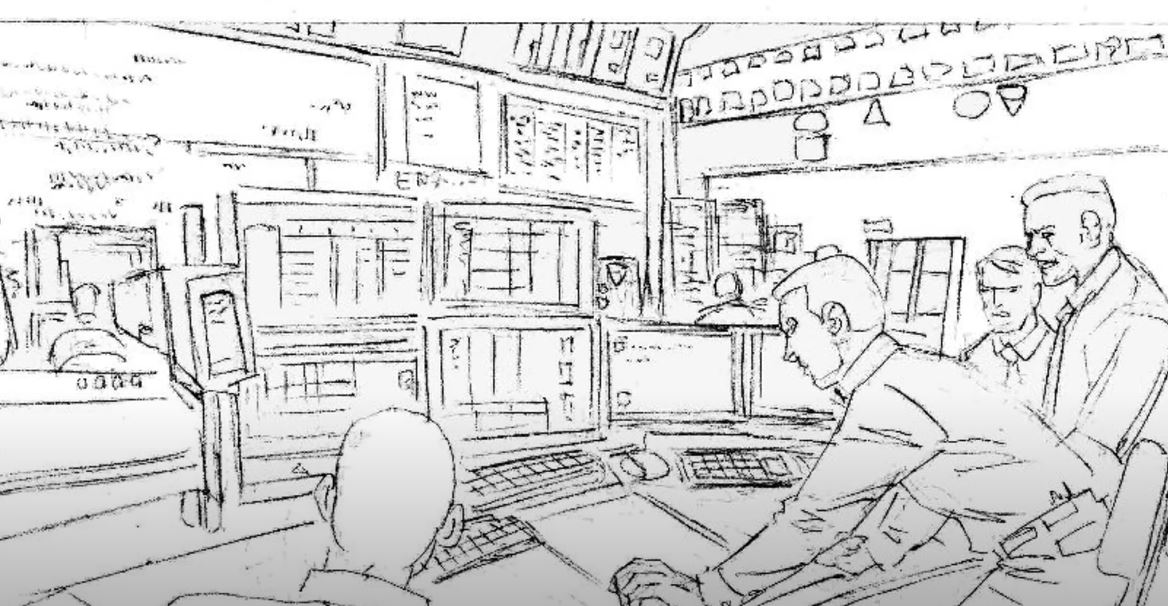 He would then tease another project, “Vox and I have a huge epic horror thing we’re doing that we’re just in the early stages of. But several episodes have been produced for the phone app. So, I’m going to be digging into that as well. So Vox is keeping me busy.”

Dixon would conclude the update by letting folks know if they are interested in supporting any of these projects they can do so by becoming a patron at the Arkhaven Comics Patreon account.

He explains the Patreon account “is to be used for the production of a lot of the artwork you saw, particularly digital projects that are coming up.”

What do you make of this update from Chuck Dixon? Do any of these stories interest you? Do you plan on supporting Chuck via Patreon?