Disney Star Wars author Pablo Hidalgo has apologized for tweeting a comment regarding fan emotions after his comment sparked a wave of controversy across the fandom.

The controversy began on December 26th, when Twitter user @fellawhomstdve tweeted a screenshot of a recent video from YouTuber Star Wars Theory, in which the YouTuber can be seen getting emotional and shedding tears of happiness while viewing the action-packed return of a heroic Luke Skywalker in The Mandalorian’s second season finale.

Based on their own later explanations, it’s assumed that the picture was initially posted to draw mockery towards Star Wars Theory’s recording of his emotional reaction. Though @fellaswhomstdve deleted their tweets before a proper archive could be made, Disney Star Wars Is Dumb was able to capture screenshots of their relevant posts. 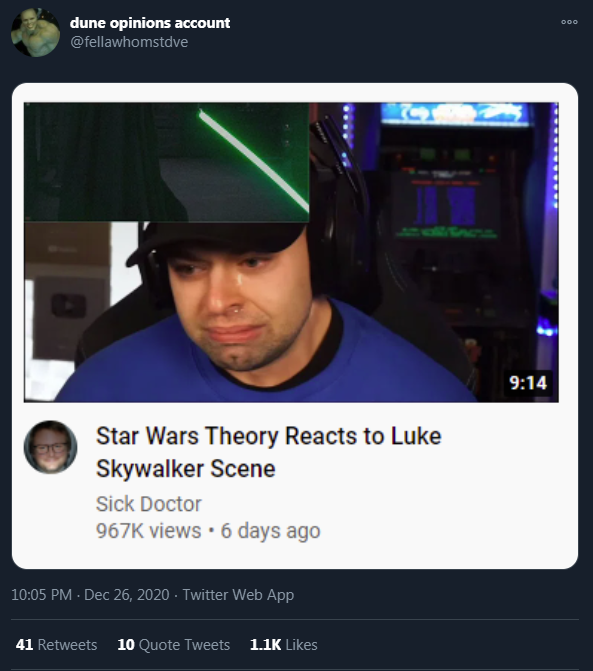 In response to Hidalgo, @fellawhomstdve asserted that “if you feel compelled to have an emotional reaction to star wars by all means have one!”.

“Hell I almost cried at Crait in the theater and I’ve never cried at a movie in my life,” they clarified, before noting that their criticism was directed towards the act “artificially recreat[ing] that s— for your millions of followers!” 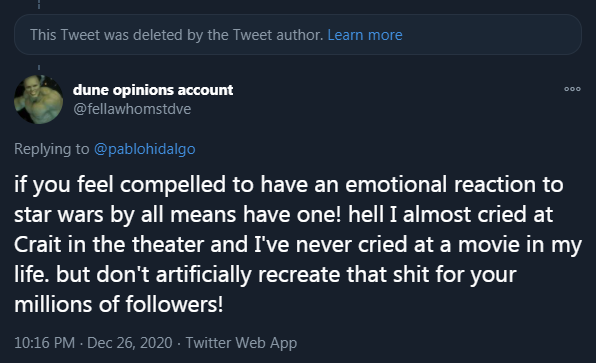 While some believed that Hidalgo’s tweet was an attempt at a sarcastic but ultimately supportive joke, arguing that the author was mocking the very individuals who sincerely hold this opinion, many took it as a genuine insult directed towards fans who were excited by the return of one of their favorite fictional heroes, including Star Wars Theory himself.

“Pablo Hidalgo is chiming in on this thread which is making fun of me for being emotional over Luke Skywalker,” Star Wars Theory explained to his followers. “I don’t mind trolls, but I can’t see what he’s said, and I’d hate to believe he would join in as a Lucasfilm official.” 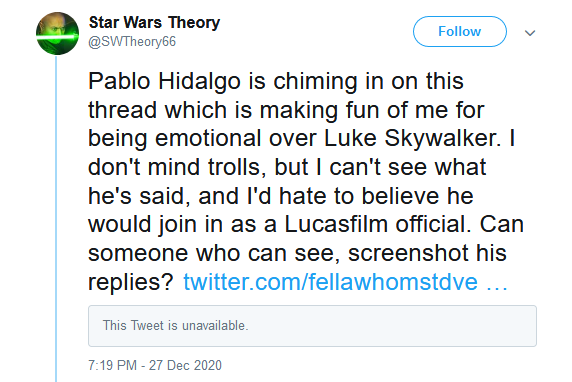 When Star Wars Theory was finally presented with the tweet in question, he stated “Well here it is. Basically Pablo validating that post and undermining my emotions.”

“Expected more from someone so high up at Lucasfilm,” he added. “That’s really s—ty to see.” 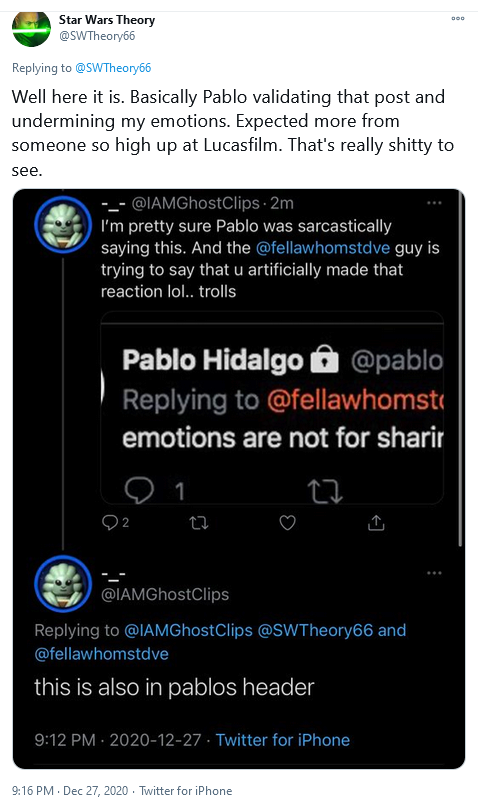 Bafflingly, Hidalgo then proceeded to change his Twitter header to a screenshot of his controversial tweet, which prompted Star Wars Theory to question “How is this acceptable from someone high up at Lucasfilm?”

“You’re telling people it’s not ok to have emotions about the work your company produces, and you make fun of them for crying?” he asked. “Not ok.” 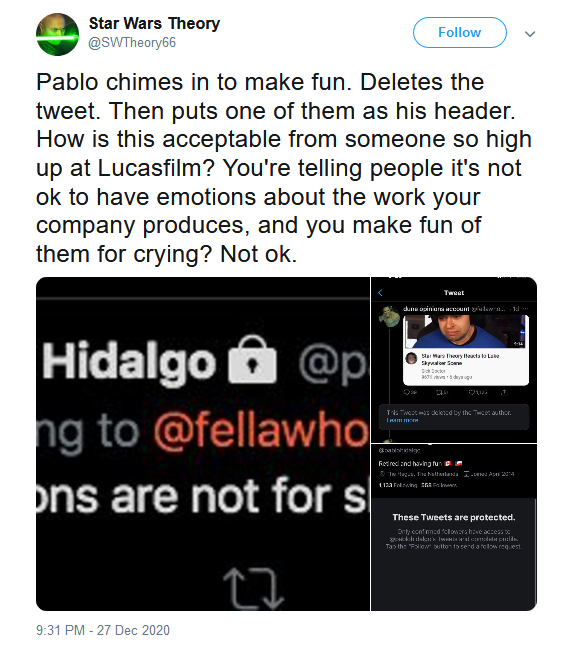 As outrage began to build against Hidalgo, the author took to Twitter once again, this time to “clarify that my post that “emotions are not to be shared” was sarcastic self-mockery and was certainly not intended to be hurtful to anyone” and assure fans that he was “deeply sorry” for the hurt his tweet caused.

“As a lifelong fan, I appreciate fans expressing how they fell,” Hidalgo said. “It’s what being a fan is about!”

Hidalgo then encouraged fans to continue voicing their opinions and expressing their opinions, adding “we can’t all be together in movie theaters or at conventions right now, so express yourself online!”

“(In fact, those of us not prone to such displays will quietly live vicariously through your energy,” he concluded.” 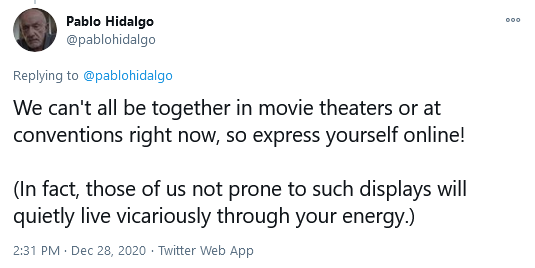 The Star Wars story group member has since changed his header, removing the screenshot of his tweet and replacing it with an enlarged image of what appear to be trees on a residential street.

What do you make of Hidalgo’s tweets and responses? Let us know your thoughts on social media or in the comments down below!