A brand new rumor claims to reveal who one of Marvel’s top choices to play Iceman in live-action.

The rumor comes from scooper Mikey Sutton at Geekosity Mag. 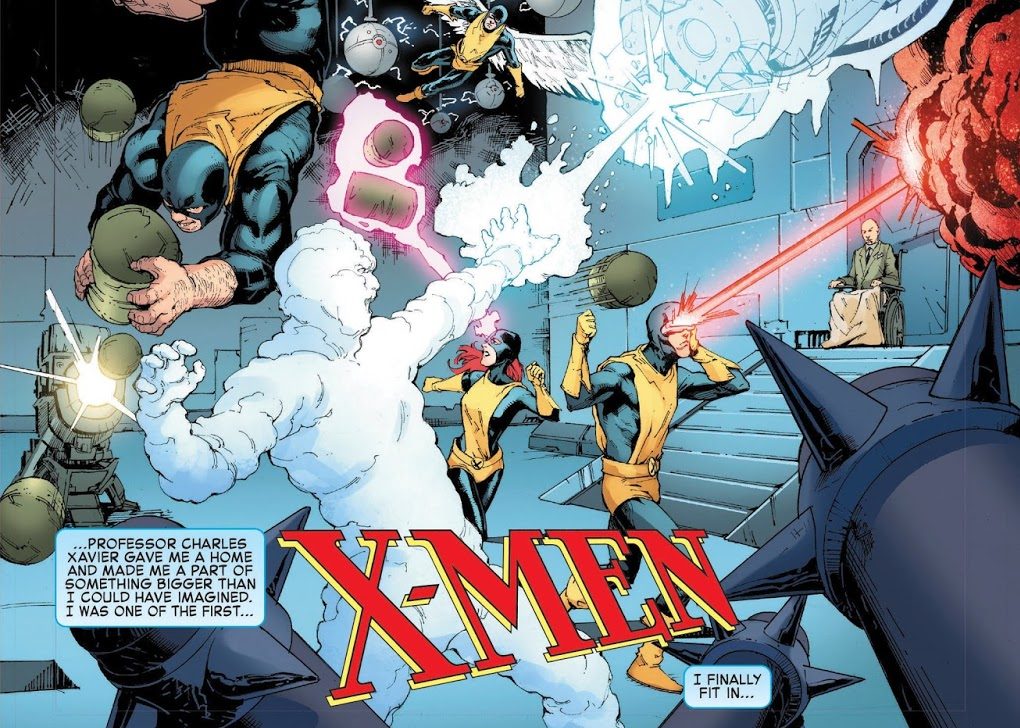 Sutton claims that Marvel is eyeing Cobra Kai actor Tanner Buchanan, who plays Robby Keene, to suit up as Iceman aka Bobby Drake.

Not only does Sutton claim that they are eyeing Buchanan, but he also revealed that Iceman could show up in an upcoming Spider-Man movie.

The scooper explains, “Sources have revealed to me that Iceman could be among the first X-Men cast for Disney. His debut is being discussed for an upcoming Spider-Man movie.”

However, Sutton does note that “no negotiations have yet begun with the actor, and he hasn’t been approached yet.” 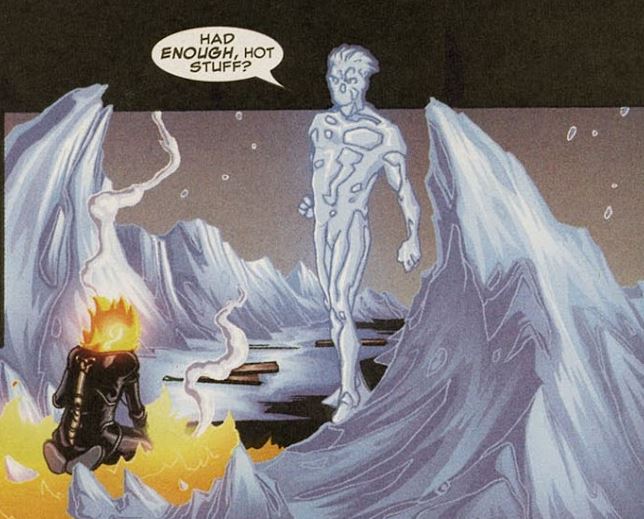 The idea that Iceman would show up in a Spider-Man film is not new to the rumor mill.

All the way back in August 2019, YouTuber TVO from Lords of the Long Box detailed that Marvel, Disney, and Sony had reached a new deal to keep Spider-Man in the MCU.

As part of that deal, TVO claimed that a second trilogy of Spider-Man films would focus on Peter Parker’s college years. It’s during those college years that Parker would meet up and team up with both Firestar and Iceman.

TVO explained, “It’s a six picture deal with Tom Holland and an option for a seventh. There are three more Spider-Man films after the third one. In essence, a new trilogy. The second trilogy will focus on Peter Parker’s college years including plans to meet up and team up with Firestar and Iceman.” 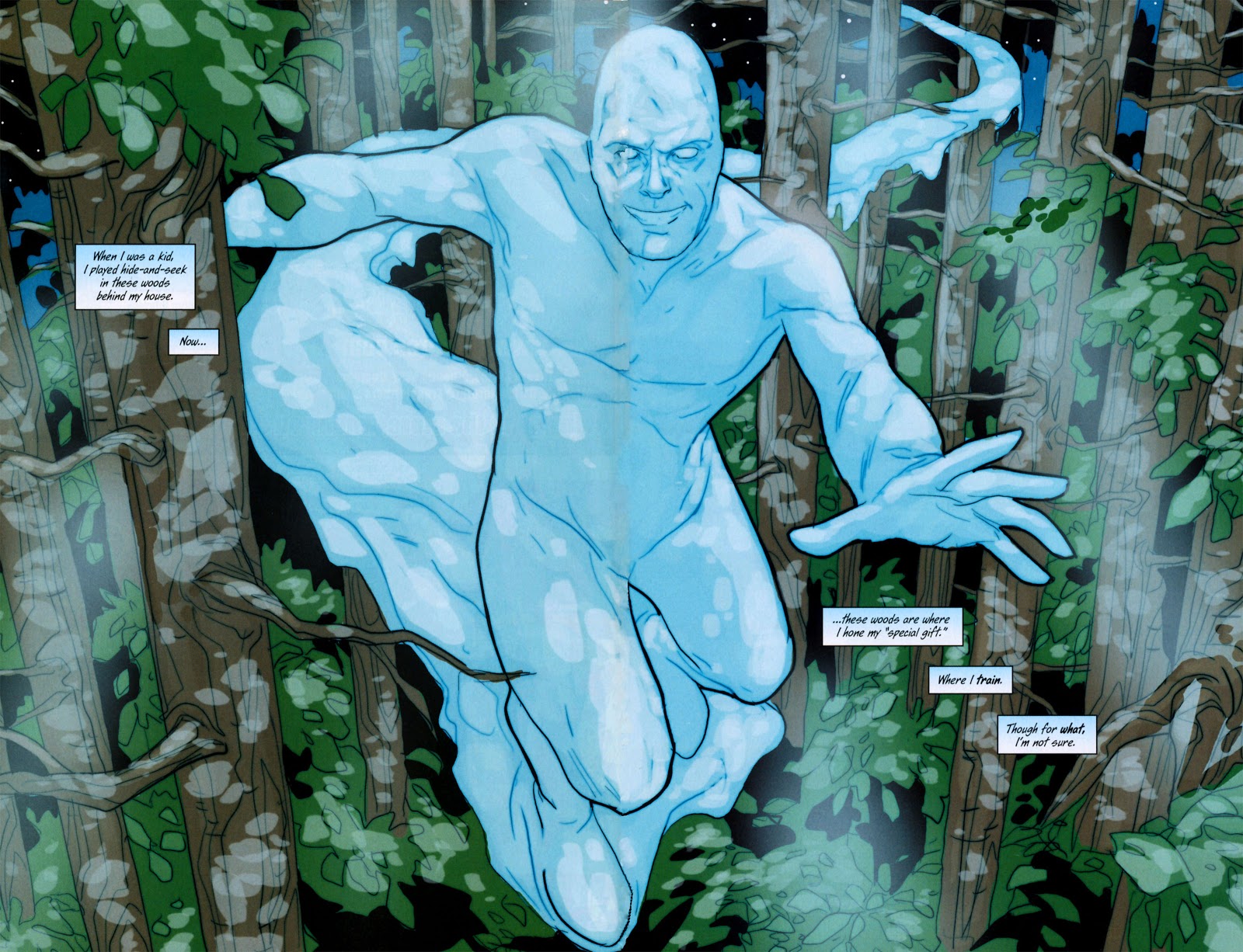 In that same alleged scoop from TVO, he also revealed that Parker would also team up with Fantastic Four member Johnny Storm.

He stated, “The other three movies are two Avengers films which Spider-Man will have a larger role with the Fantasic Four becoming friends with Johnny Storm.”

More recently, Sutton scooped back on Christmas Day 2020 that Firestar wouldn’t just be a friend to Peter Parker in college, but will be a romantic rival to Zendaya’s MJ.

The scooper wrote, “I am now hearing that Firestar will be a romantic rival trying to steal Parker’s heart from MJ.” 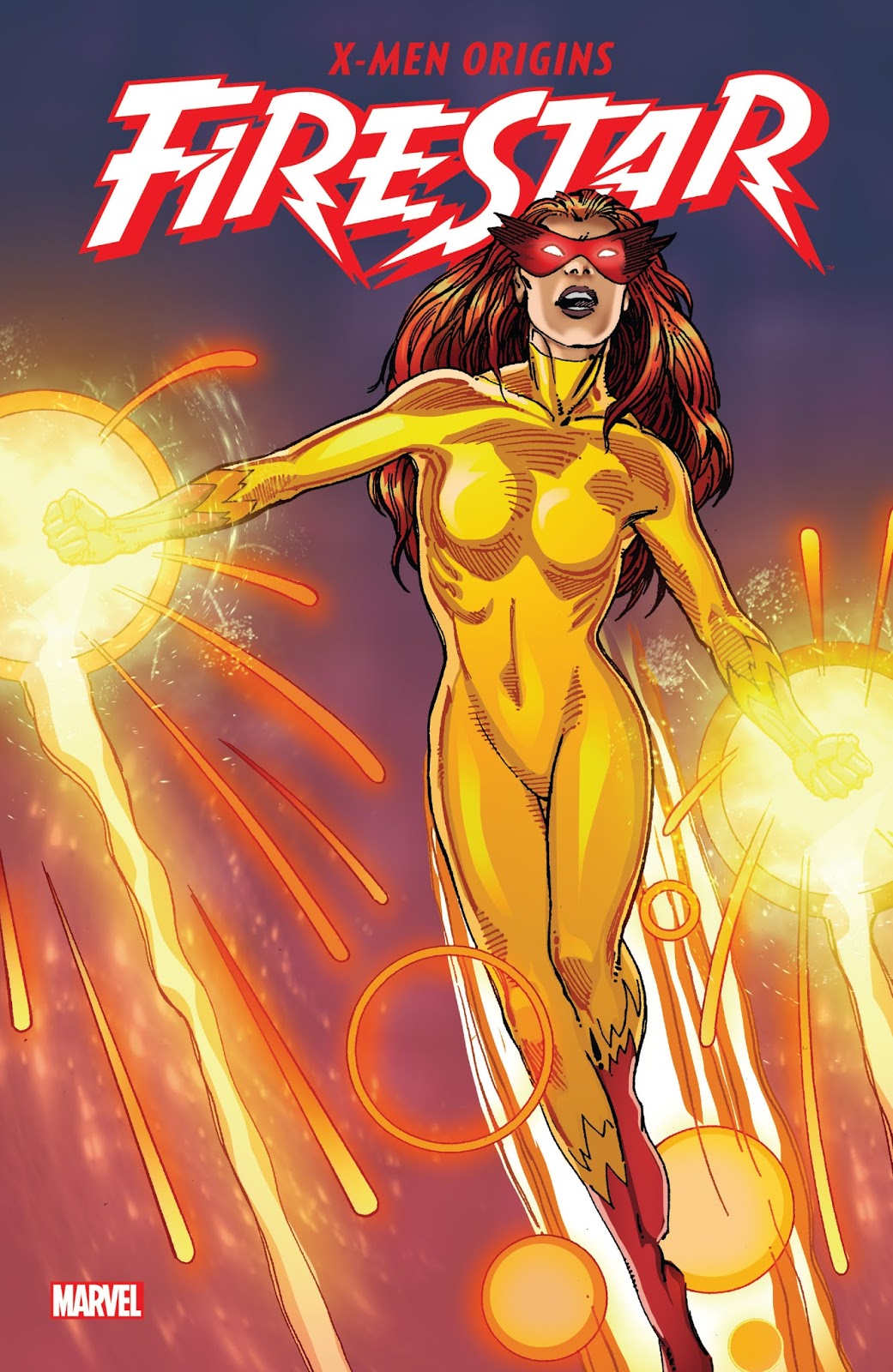 As for Iceman, he was previously portrayed by Shawn Ashmore and was romantically involved with Rogue in X-Men, X2: X-Men United, X-Men: The Last Stand, and X-Men: Days of Future Past.

Iceman is one of the original members of the X-Men. He appeared in X-Men #1 all the way back in September 1963. 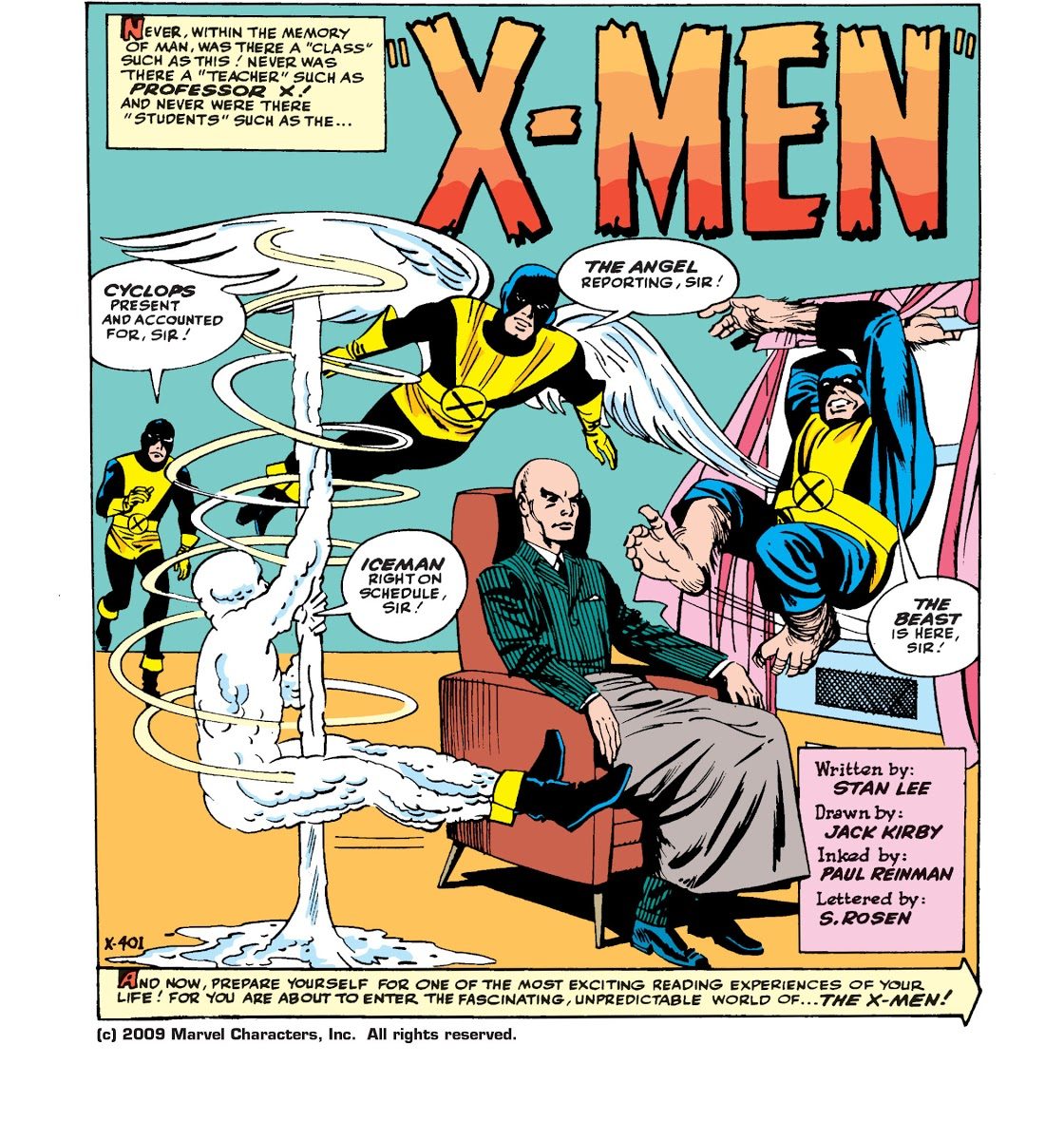 As for his encounters with Spider-Man and Peter Parker, he briefly battled the web crawler after he believed Spider-Man had kidnapped Gwen Stacy.

After a brief tussle, Iceman appeared to win the day as Parker escaped, hoping his mission to convince Stacy that Peter Parker was not Spider-Man worked. 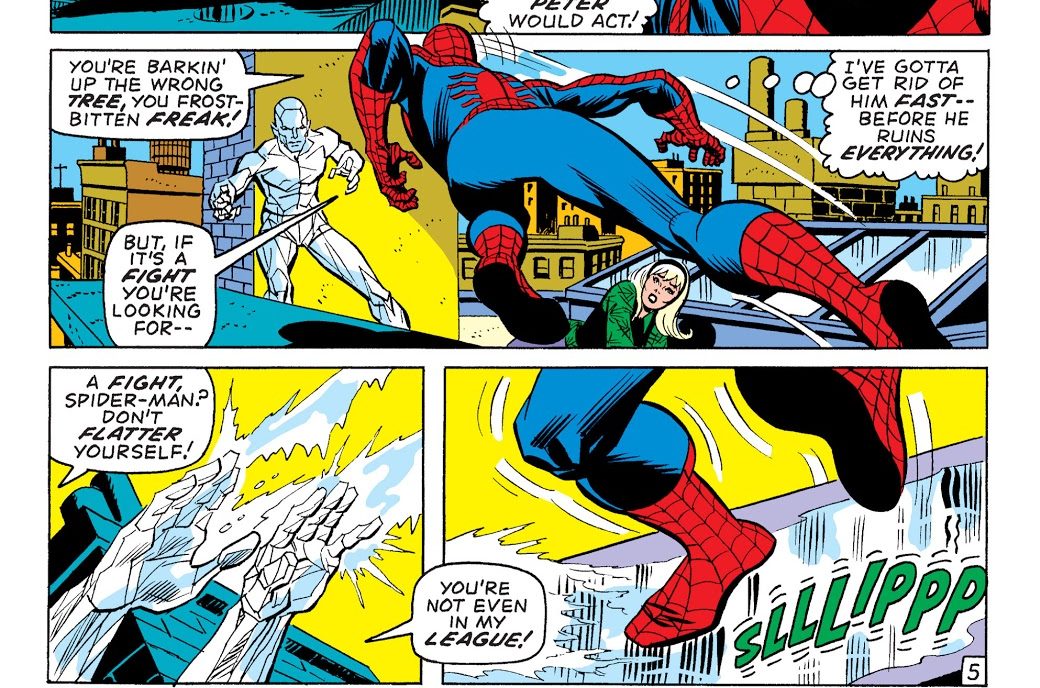 However, after taking Gwen Stacy to safety, Iceman would continue to pursue Spider-Man. This time Spider-Man would get the upper hand smashing Iceman’s ice bridge.

It gives him time to continue to pursue the corrupt politician Sam Bullit. Bullit was attempting to become the new D.A. and had sent his thugs to kill Joe “Robbie” Robertson for threatening to expose his crimes.

After Iceman followed Spider-Man to the location where Bullit’s goons had Robertson tied up, he realized Spider-Man wasn’t the villain after all and the two teamed up to take down Bullit’s thugs and expose his criminal actions to the public.

Spider-Man and Iceman would duke it out again in The Spectacular Spider-Man #17. This time Iceman was under the control of Stuart Clarke, who had previously been the costumed villain Rampage.

However, Clarke is in control of another person wearing the Rampage suit, and he orders this minion to kill both Spider-Man and the X-Men Angel. 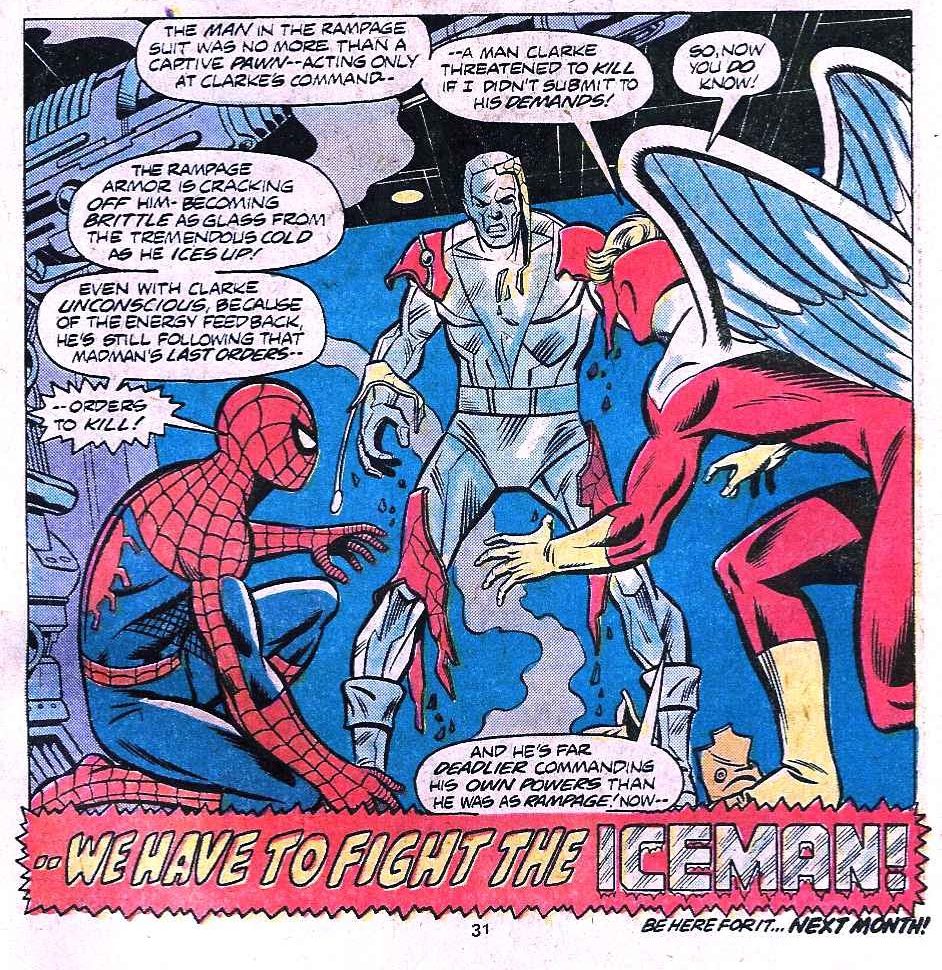 In order to defeat Iceman this time, Spider-Man has to use his wits. He lures the former Champion into a shower. Then he sets off the shower heads to pour forth scalding hot water.

The trick works and Bobby Drake returns to his normal self. 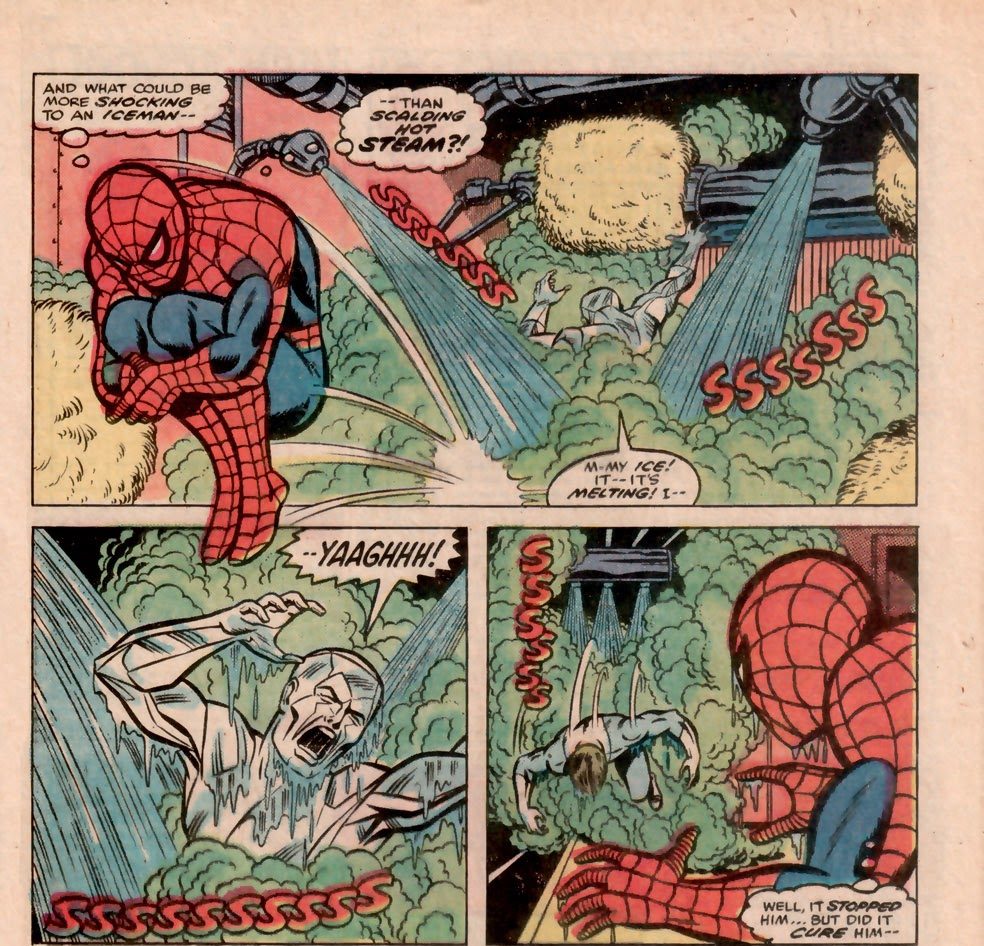 Spider-Man has also teamed up with Iceman and Firestar on numerous occasions.

In one such occasion they put a stop to a bunch of criminals led by Daddy Longlegs, who was attempting to sabotage the Dallas Ballet Nutcracker and prevent the performers from putting on the ballet.

What do you make of the idea of Tanner Buchanan playing Iceman?