In a lengthy thread posted to Twitter, the Manhunt actor reacted to the NCAA basketball game between Duke University and the University of North Carolina that took place over the weekend.

He began his thread writing, “I often say that leftists ruin everything. Today’s UNC vs Duke game prove it. Those players worked their asses off their whole lives to become D1 basketball players at the premiere programs in America. They played the game of their dreams in an empty stadium.” 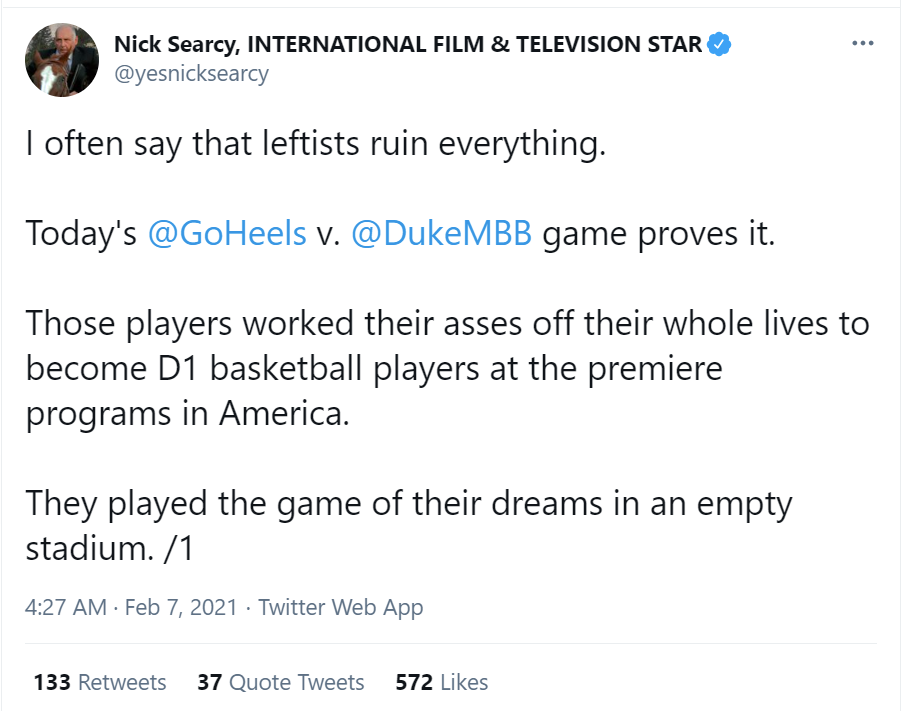 “Think of how these young athletes were cheated by not playing in a Duke v. UNC game in front of a packed house. Now consider why ANY young person would be inspired to become an elite athlete if no one can come see you play,” he continued. 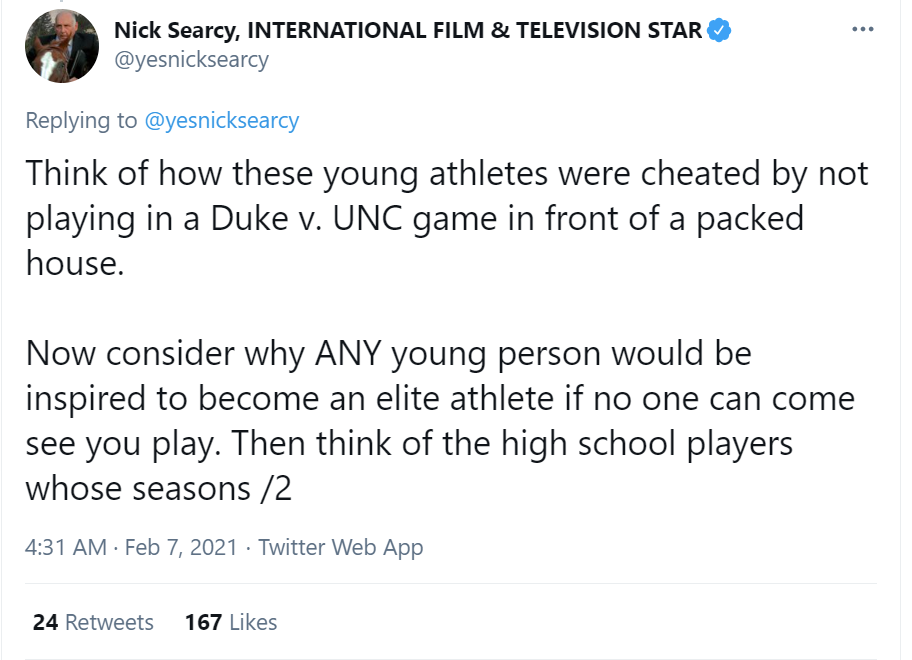 The actor then stated, “Then think of the high school players whose seasons have been cancelled over this nonsensical political move by the Democrats to destroy their hopes and dreams because they wanted to get Trump removed.”

He added, “They don’t care who they have to ruin to gain power. That is the nature of leftists, They are ruthless, unprincipled, and without conscience.” 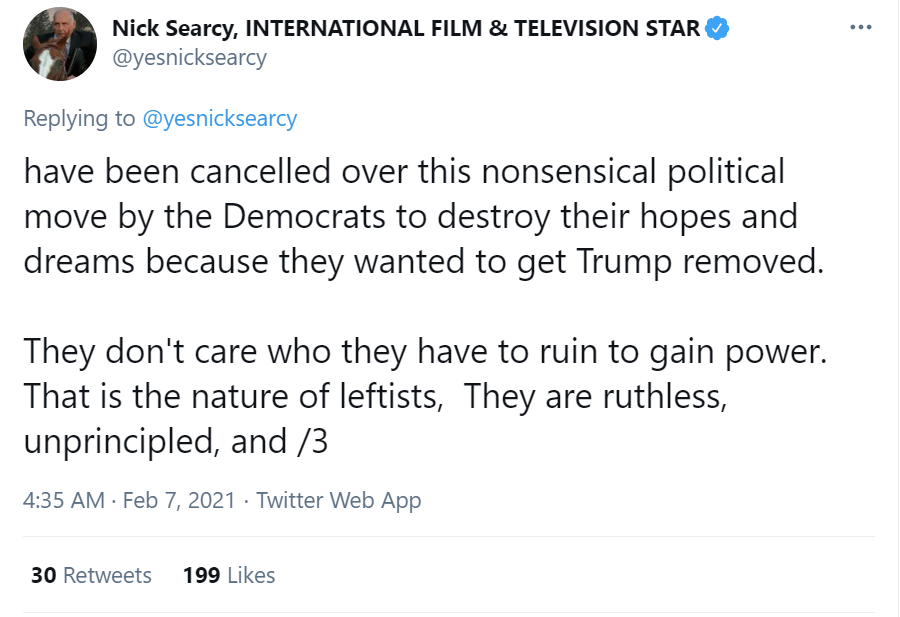 In the next part of the thread he wrote, “And, this is the most frightening aspect: They have ‘won’ — and they are still not satisfied. They are still angry, hateful, bitter, and relentless. They will continue until they have destroyed every vestige of individual achievement and every possibility for success outside of the almighty State — because individual liberty must be crushed for them to have collective power and control over every single aspect of your lives, from sports to concerts to plays and films and any form of entertainment.” 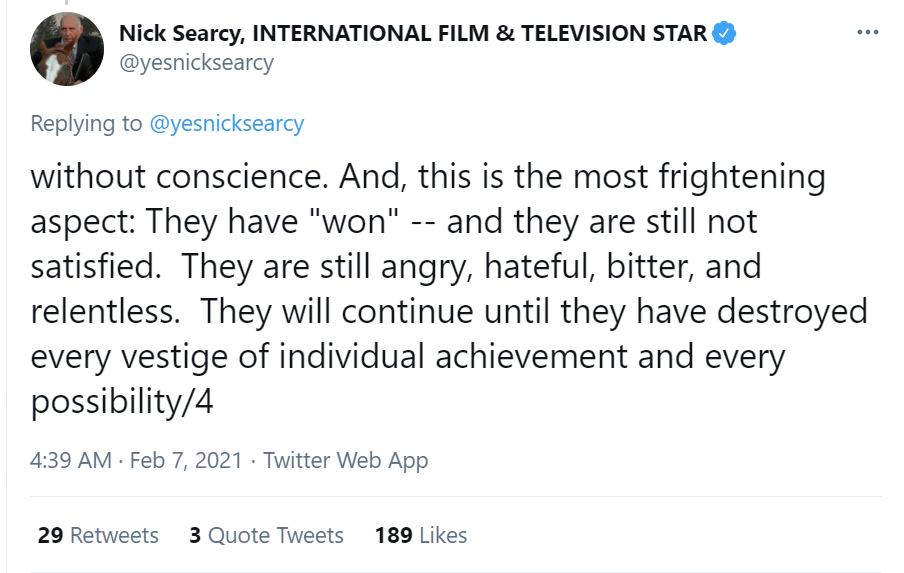 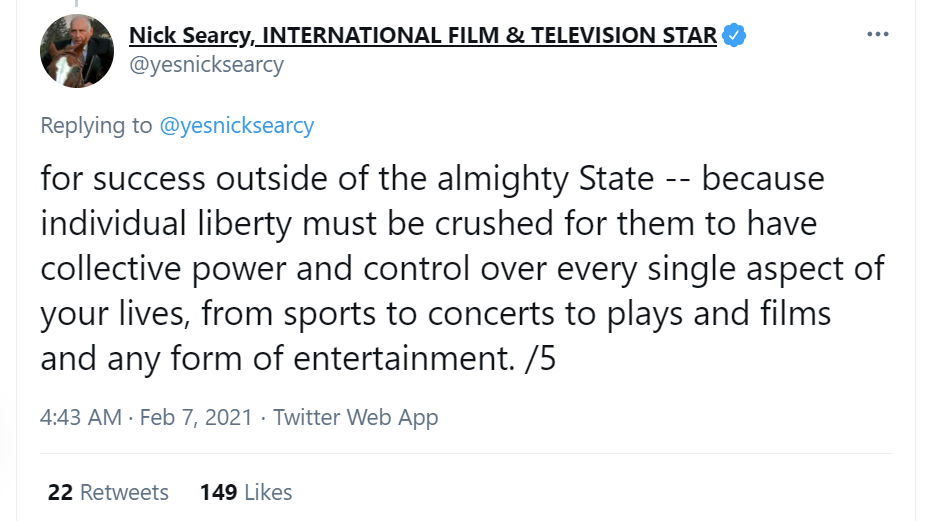 The Shape of Water actor stated, “If your art, your poetry, your theatre, your writing, your very thoughts expressed on social media, do not align with the STATE-approved opinion, you must be cancelled, shunned, humiliated, suppressed, and vanquished.” 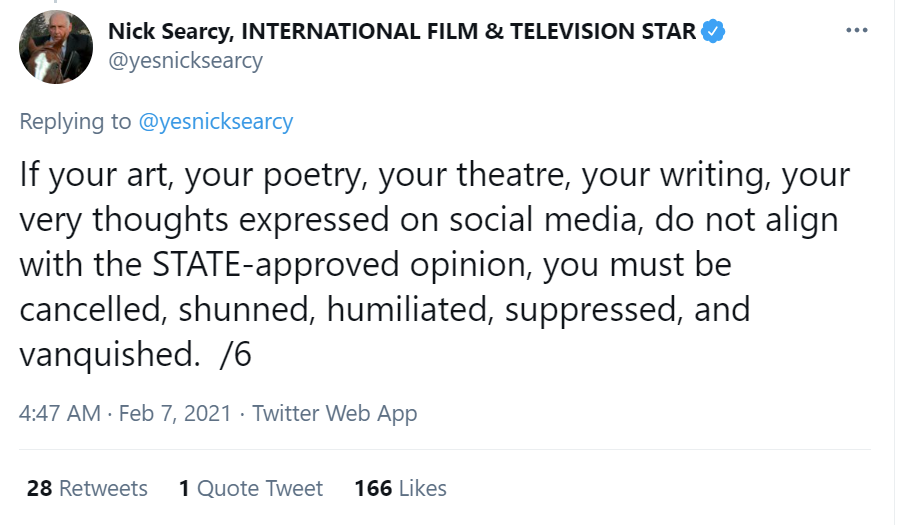 “This is the country you live in now. “Think what we demand or be crushed.” Enjoy what you have achieved, leftists. You have destroyed the American dream, which boils down to self-determination,” he continued.

Searcy went on, “By installing Joe Biden, you “liberals” are the most illiberal people that have ever lived. You have turned the only country in human history based on the individual into a totalitarian state based on the tyranny of the collective.

“Enjoy the collapse. We who refuse to accept this, like me, are now just like the musicians on the decks of the Titanic, who chose to continue making music while the ship went down,” Searcy wrote. 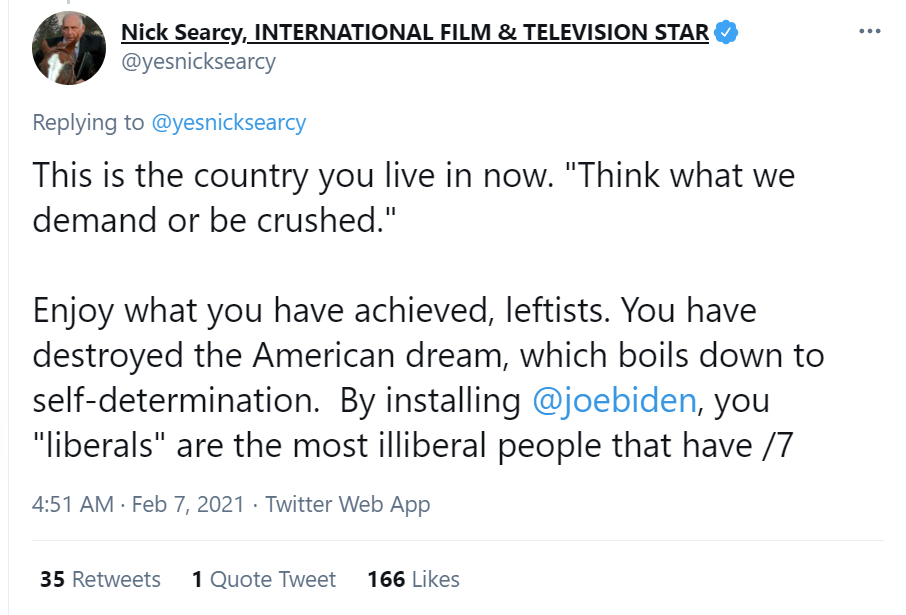 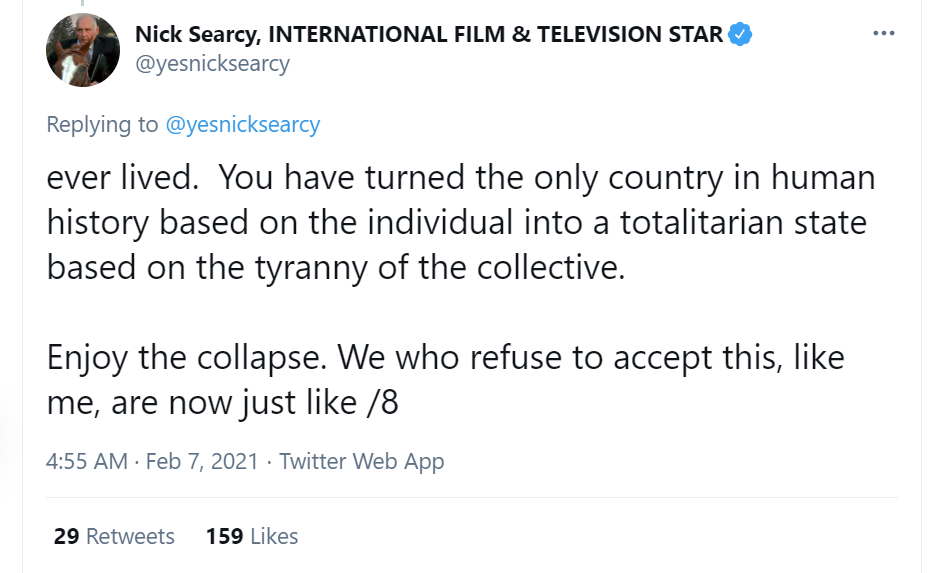 He then declared, “I will not stop playing music on the deck until the ship goes down. I urge all artists out there to continue creating, even though all is lost. Because at the end of days do you want to be like the shitty forgotten Communist “artists” who toed the party line in Stalin’s Russia, or do you want to be an artist who stood up for the rights of the individual even if you cost you a medal from the tyrannical state?” 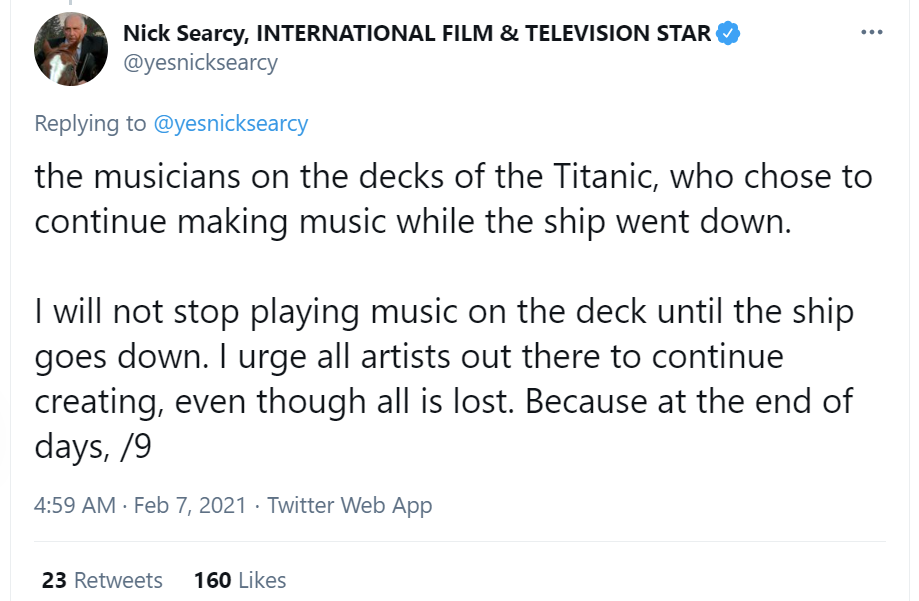 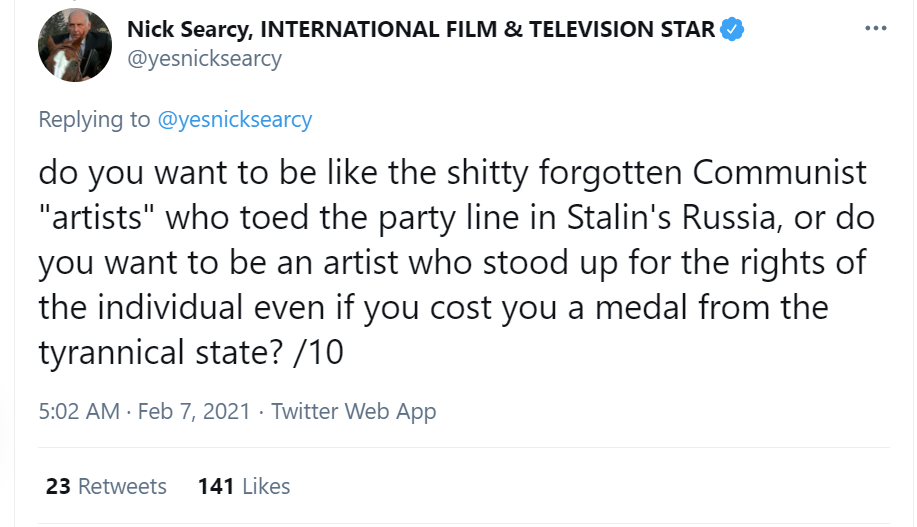 “I know who I want to be. I want to be one of the people who resisted the state, who stood up for free speech even when I disagreed with it, and who fought back even when all seemed lost. I will not submit. I will not capitulate,” he adamantly stated. 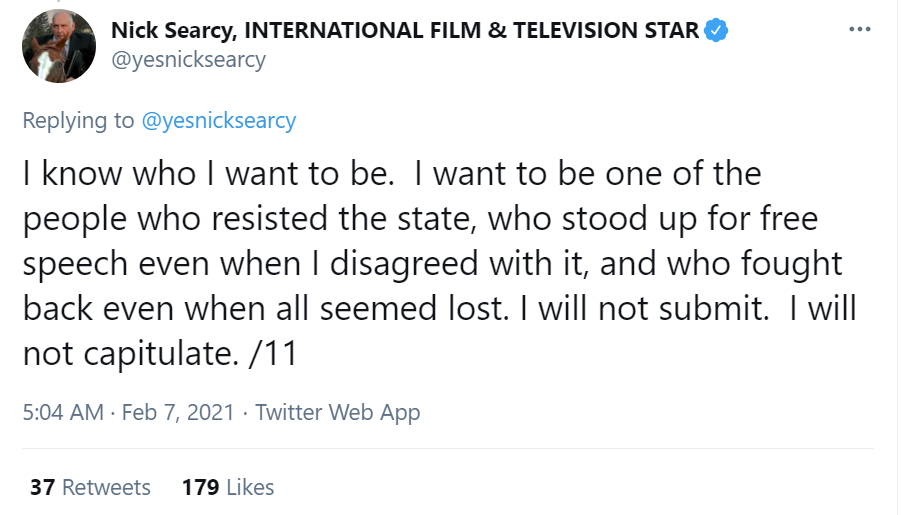 He reiterated, “And I will continue until I leave this earthly plain. Because I know this, and you will know it someday, sadly when it is too late, and you are struggling under a totalitarian regime: As I have said repeatedly, LEFTISTS RUIN EVERYTHING.” 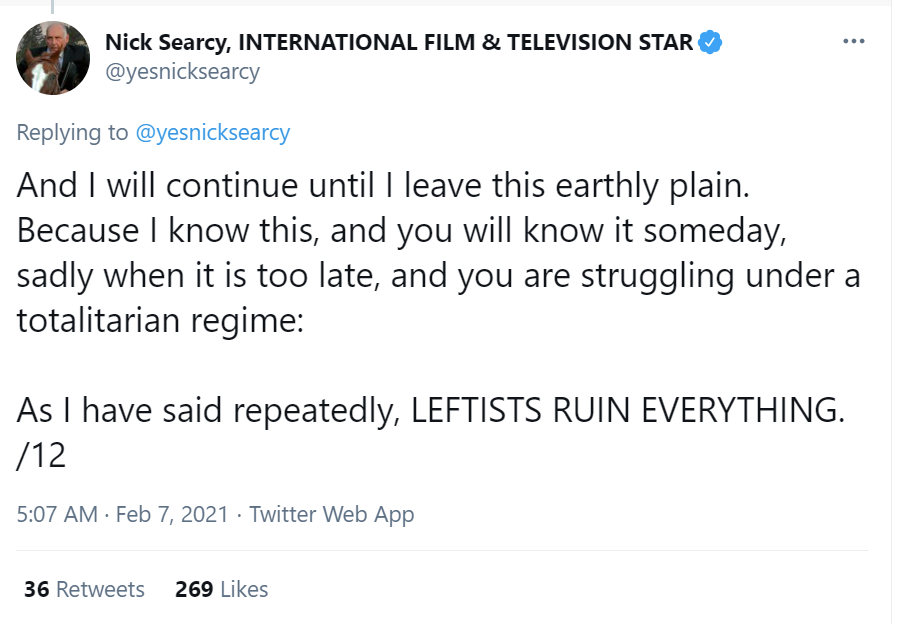 Searcy concluded, “They have now ruined the greatest country that has ever existed on the face of the Earth. Play your song well as the ship goes down, my friends. And know that your music has been heard, even as you are cancelled & erased by your neighbors, family & friends. God is watching.” 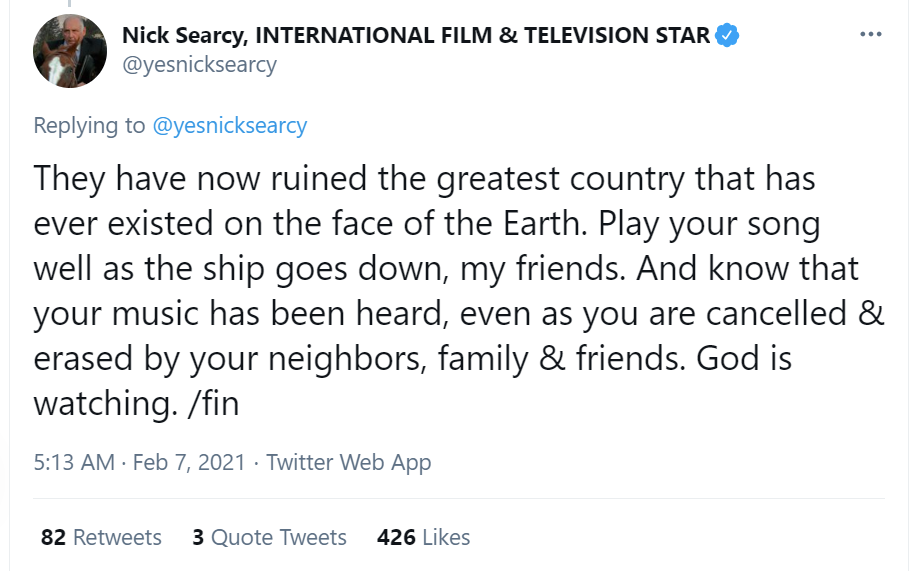 Searcy hasn’t be afraid to write out his thoughts on Twitter in the past. He described a number of comic book creators who were participating in a fundraiser for Joe Biden and Kamala Harris back in October 2020 as “fascists.”

He wrote then, “These are the fascists. Agree with them, or you are out of the business.” 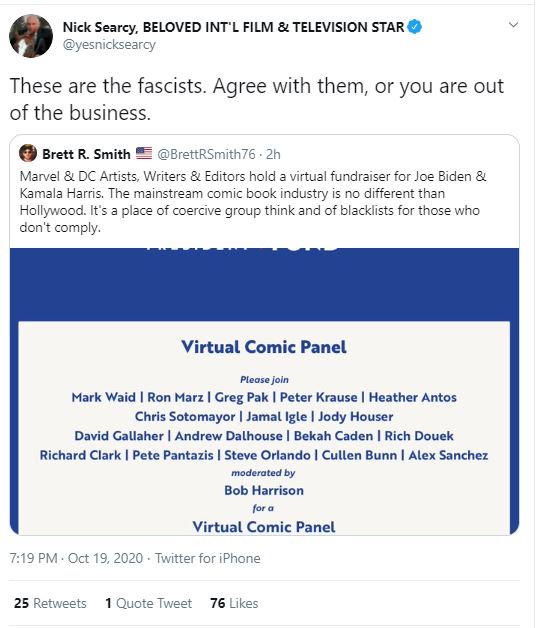 What do you make of Searcy’s thread? Do you think leftists have ruined the United States of America?