A brand new report confirms that Disney is a compromised corporate entity that caters to the left wing social media mob.

This new report comes from The Hollywood Reporter (THR) and its writers Aaron Couch, Tatiana Siegel, and Borys Kit.

In the report the writers claim publicists are “advising clients to steer clear of politics, especially anything leaning right.”

They then cite crisis PR rep,  founding partner at Emerald Digital, and President of HeraldPR Juda Engelmayer, who also confirms Disney caters to hate mobs coming from the left.

Engelmayer writes, “I don’t know what people at Disney personally believe or don’t believe with regard to politics, but as a corporate entity, they want to stay as trouble-free as possible. And anything that’s going to offend the left is a problem.”

The rep then claims that clients are actively pushing left wing talking points, “I have clients who are making an extraordinary effort to post what the social left wants to see.”

Not only does the report confirm Disney caters to the left wing mob, but it also tries to remove any kind of responsibility from The Mandalorian Executive Producers Jon Favreau and Dave Filoni in Carano’s firing.

THR reports, “The decision to banish Carano from the Disney kingdom went higher than Mandalorian creator Jon Favreau and was made by Lucasfilm executives.” 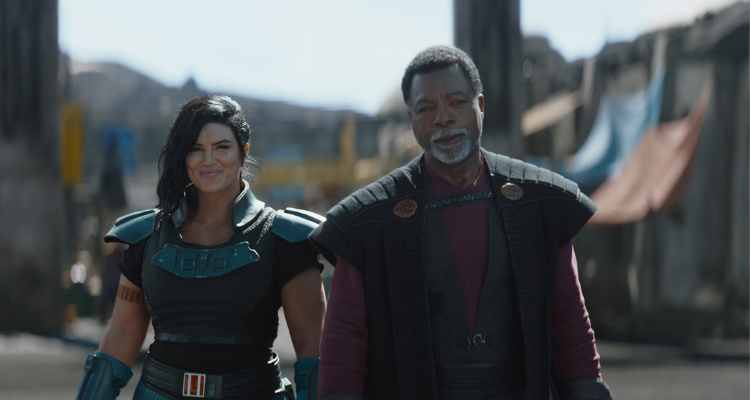 Even if the decision was made by Lucasfilm executives, one would think they informed Favreau and Filoni of that decision, and that one of them might have called Carano and let her know that she had been fired.

However, that was not the case at all. Carano revealed to former New York Times journalist Bari Weiss that she found out she was fired when the story began circulating on social media.

Carano explained, “I found out through social media, like everyone else, that I had been fired.” That means Favreau and Filoni didn’t have the common courtesy to even give Carano a phone call to break the news.

Nevertheless, THR would conjure a source claiming that it was Carano who did Favreau wrong. The anonymous source posed the question, “Why would you put Favreau in that position?”,

What position? Standing up for yourself against the pronoun gang that had been repeatedly haranguing Carano for months? Sharing posts warning how hating your neighbors can lead to horrific violence? Talking with Star Wars fans who have been jaded by Lucasfilm’s direction with Star Wars in the sequel trilogy?

No, this is utter spin. It appears that Favreau left Carano to the wolves for months and then didn’t have the decency to even give her a call to let her know she was getting fired. No matter what kind of spin THR tries to pull, Favreau does not come away from this scandal unscathed.

And it’s not just Favreau, it’s Filoni and the rest of Carano’s castmates as well. Their silence is deafening. And that silence is cowardice. By not facing down this mob and standing up against it, they are tacitly encouraging it.

The mob might have convinced Disney to fire Carano this time, but they won’t stop there. These other “celebrities” are next. It’s just a matter of when it will happen for them.