A new Chinese poster promoting Godzilla vs. Kong’s upcoming release in the country – the highly-anticipated kaiju throwdown will see a more conventional, theater-focused release plan  –  has made its way to social media. 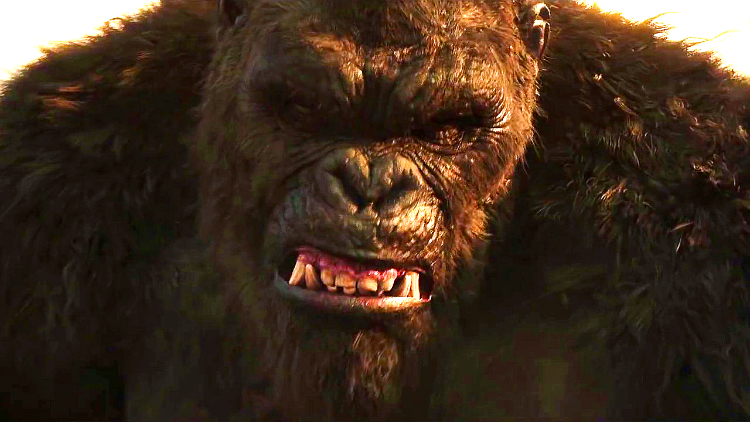 The poster shows Kong and Godzilla fighting underneath the surface of the ocean and beneath the naval armada which during the film, in the midst of transporting Kong to the mainland, comes under attack from the King of All Monsters.

With an aircraft carrier on fire, jet fighters sinking into the depths, and Kong actually fighting back despite being out of his element, it’s believed that this new poster teases a scene from the film where the two beasts will scuffle beneath the waves. 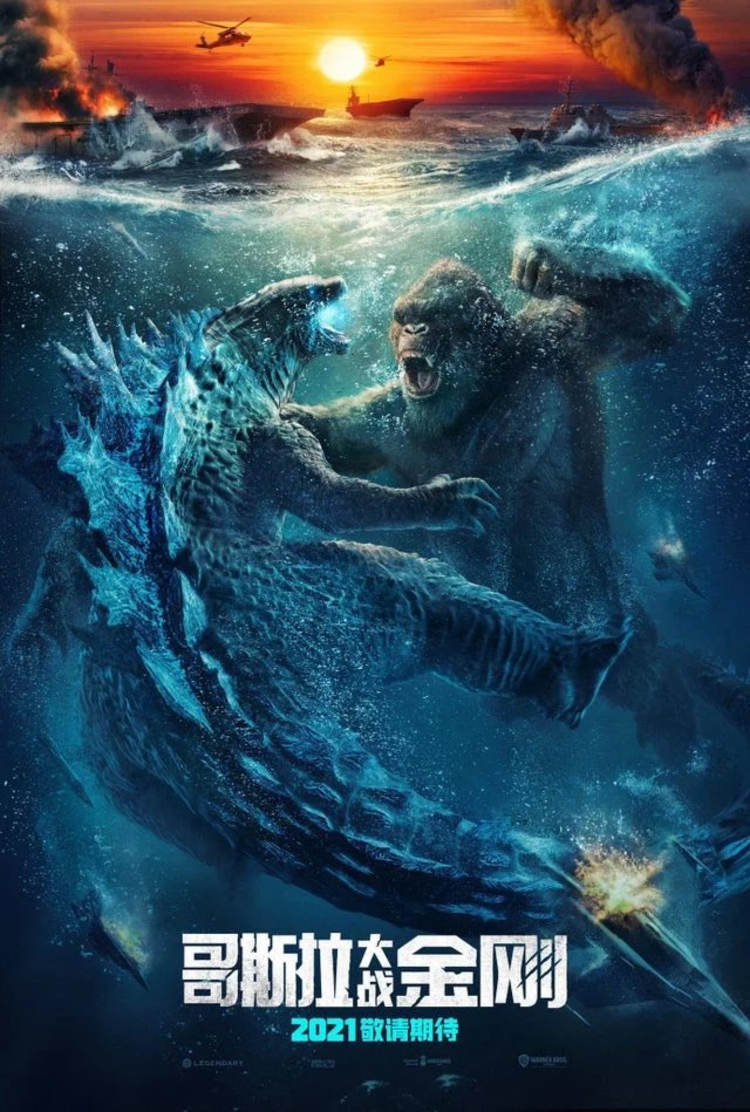 In a new trailer, Kong’s fur and beard are soaking wet, proof positive that the Eight Wonder takes a dip. And though Kong can also be seen getting knocked off his raft, climbing aboard the deck of the aircraft carrier as Godzilla barrels towards him, that’s all we know so far about this rumored sequence.

Other images surfaced this week which were grabbed from TV spots for the Chinese market. They tell us a little more about the film, starting with Kong’s exploration of Hollow Earth.

Accompanied by humans in the anti-gravity HEAV’s amidst the quest for his ax, Kong and his companions find the depths have an ecosystem similar to the surface, complete with clouds, mountains, and fog.

We knew Godzilla vs. Kong was going to be a visual feast but this mise-en-scene ups the ante about as much as Godzilla’s healthy blue glow.

As first seen in King of the Monsters, the kaiju’s glow is an intimidation display. This means when we he lights up, on land or in water, fans can anticipate mass destruction – atomic breath or not.

And while we’ve seen instances of Gojira’s glowing dorsal plates and eyes in previous films, but they’re much more striking when set against the neon lights of Hong Kong, just like director Adam Wingard hoped.

Another still shows the moment a glowing Godzilla swims up to a city (or possibly an Apex facility), likely ready to rain hell on his mission to neutralize – as we’ve confirmed – the leftover brains of King Ghidorah.

And it appears that he’ll do exactly that, as the TV spot features a brief millisecond wherein the G-Man can be seen making landfall, causing an immediate explosion, and then unleashing his signature heat ray.

My guess is that the rampage will happen early in the film to signify something is irking the big fella, though at that point will most likely be kept in the dark as to what that cause of distress specifically is (though if you’ve kept afloat of GVK news, you’ll know it’s Ghidorah and MechaGodzilla).

Nevertheless, the misunderstanding leads to Kong and Godzilla coming face-to-face in Hong Kong, where both contenders will refuse to give an inch.

Kong is clearly not intimidated though Godzilla might try his hardest.

The TV spots were compiled into a final trailer that mentions the ancient feud between the Titans. You can watch it below.

Who will be the last one standing? Find out when Godzilla vs Kong releases on March 31st in theaters and on HBO Max.

What do you make of these new images? Let us know your thoughts on social media or in the comments down below!