First reported by WDW Pro at Pirates and Princesses, Kidder described himself in his Twitter bio as a Disney Imagineer and producer on Epcot/Spaceship Earth. 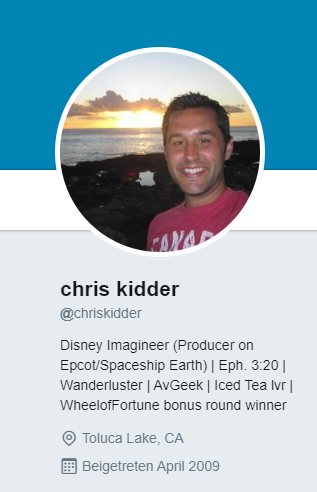 He has since locked down his Twitter, but his LinkedIn profile claims he has been working with Walt Disney Imagineering for over 12 years although it states his work ended in December 2020. Kidder tells Bounding Into Comics he was no longer part of Disney in December 2020.

Before he began working with Walt Disney Imagineering his profile says he worked for almost 5 years as a Senior Financial Analyst for The Walt Disney Company.

Most recently he described himself as a Creative Producer. He writes, “Creative team leader responsible for achieving and maintaining the creative vision and for ensuring the implementation of that vision through the project life cycle, from blue sky/ideation, thru design to implementation.” 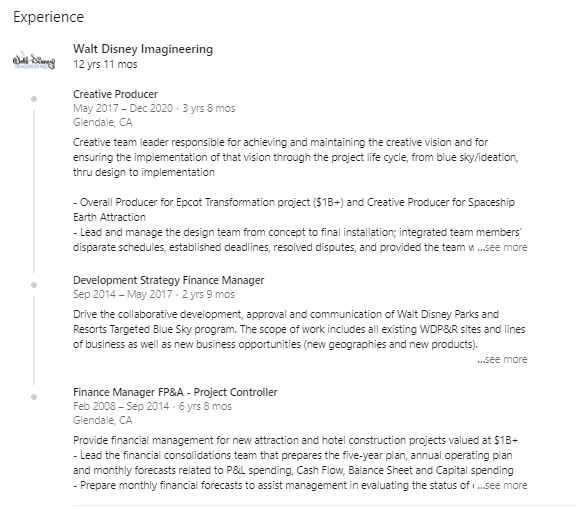 Here’s a better look at how he described his position as Creative Producer. 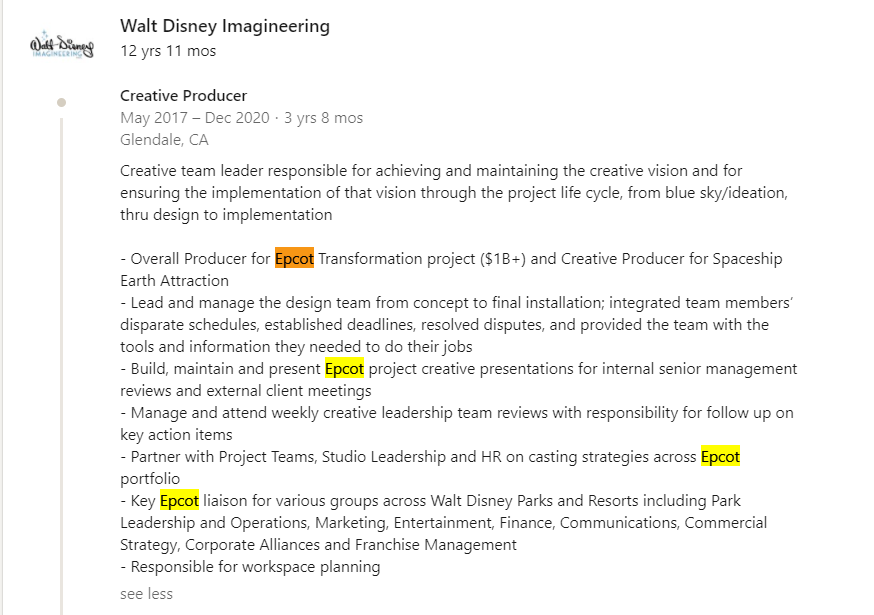 It’s pretty clear Kidder has worked for Disney for quite awhile and appears to have been in a position of significant power where he even lead and managed a design team.

As for his praising of Disney and Lucasfilm firing Carano, he posted to Twitter back on February 10th after it was announced that Carano had been fired.

He wrote, “Thank you for doing the right thing Lucasfilm!” 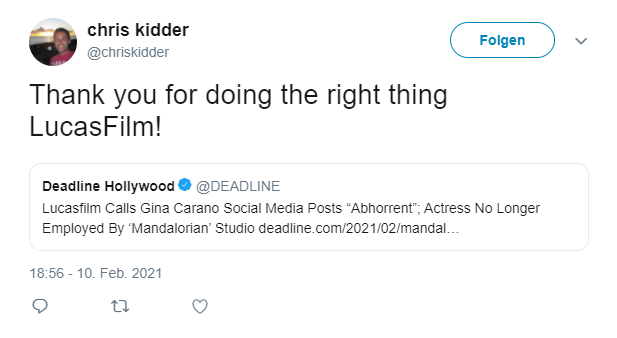 In a subsequent tweet, he then added, “if LucasFilm can make sure Gina Carano won’t be in another Star Wars related project, 100 US Senators can make sure Donald Trump is never allowed to hold public office again!” 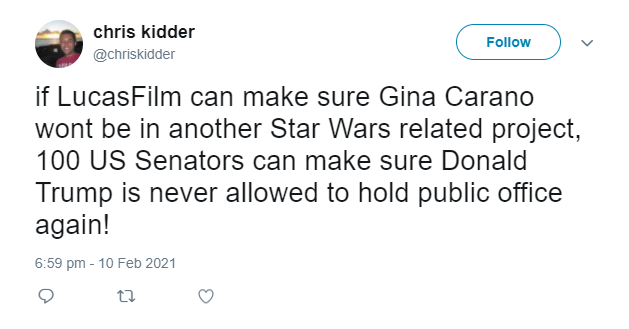 Given Kidder was in a managerial position at Walt Disney Imagineering, one has to wonder whether or not he discriminated against individuals based on their political beliefs. These tweets praising Carano’s firing certainly seem to indicate that he did.

Also given Kidder’s position, one has to wonder if this is approved corporate culture. Is Disney a discriminatory company? Their public actions certainly seem to indicate they are.

One has to wonder given Kidder’s tweets if he’s one of the individuals who created a toxic work culture at Disney and Lucasfilm.

After her firing, Carano sat down with Ben Shapiro where she detailed how Disney has a culture of bullying. She stated, “I’m not the only one that’s ever been bullied by this company, and I know that so deeply.”

“I could share a story which would turn things around in the media but I can’t because it would sell out a friend…Everyone is afraid of losing their job,” she continued.

She would also describe the toxic nature of the company, “You know how boxers head-hunt sometimes and forget to go for the body? I feel like Disney or Lucasfilm or whoever it is, just certain people at that company…I feel like I’ve been being head-hunted (…) and you can feel it.”

Later in the interview, Carano also revealed, “They’ve been all over me and they’ve been watching me like a hawk, and I’m watching people on the same production and they can say everything they want, and that’s where I had a problem. I had a problem because I wasn’t going along with the narrative…”

What do you make of Kidder’s comments? Do you think he should be fired for his praise and seemingly celebration of Lucasfilm’s firing of Gina Carano?

**Editor’s Note: This article has been updated to more clearly reflect that Kidder was a Disney Imagineer and his employ ended in December 2020 according to his LinkedIn and a statement provided by Kidder to Bounding Into Comics.**