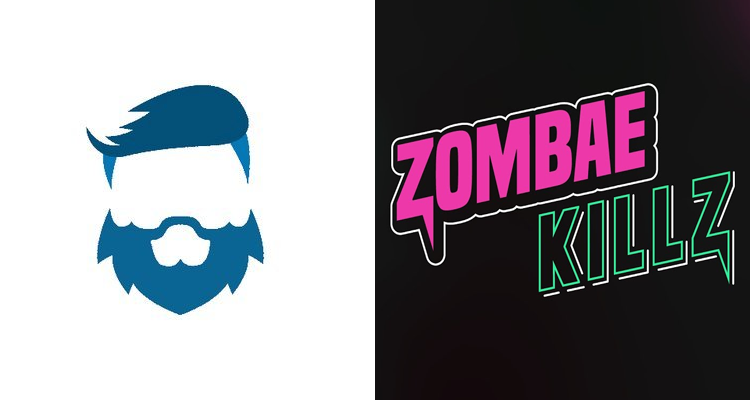 The feud between the two internet personalities began on March 1st, when computer peripheral company Logitech announced that their monthly Creator Spotlight series of streams would “be led by the voices of our women creators in celebration of Women’s History Month,” including Zombaekillz.

Retweeting the announcement, The Quartering asked Logitech, “So you all spend time promoting a creator who harasses & bullies smaller creators like @ZombaeKillz?”

“Yikes,” he continued. “How does this lady keep harassing her way to the top?” 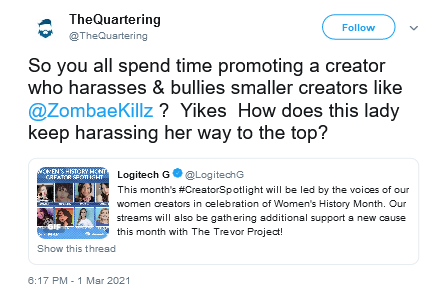 The Quartering then shared a screenshot of a tweet made by Zombaekillz in which the Twitch streamer can be seen retweeting a candid image taken of herself and captioning it “the face I truly make when any white woman is about to get her ass BEAT TO SLEEP”. 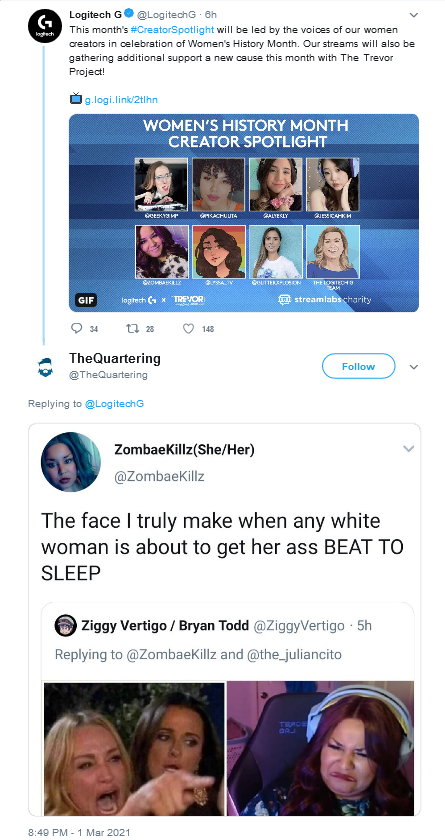 Shortly thereafter, The Quartering found that Logitech had “hid my reply,” prompting him to “take that as an endorsement of the cyber bullying done by @zombaekillz.” 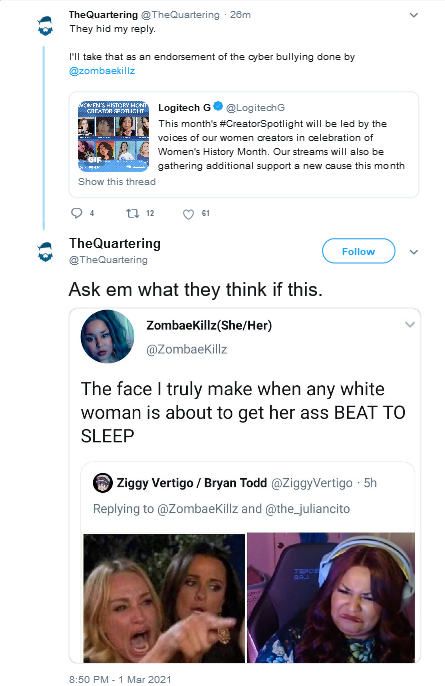 The following morning, ZombaeKillz herself would claim that the tweet shared by The Quartering was doctored, writing on her personal Twitter account, “Imagine photoshopping someone’s tweets.”

“Lmaooo like I can’t go thru my own stuff,” she added. “Yall have me TWISTED.”

Account locked before a proper archive could be made.

However, despite her assertion, the image shared by The Quartering was not photoshopped in any way whatsoever, as an archive of Zombaekillz’s tweet was made just hours after it was initially published on January 21st, 2021. 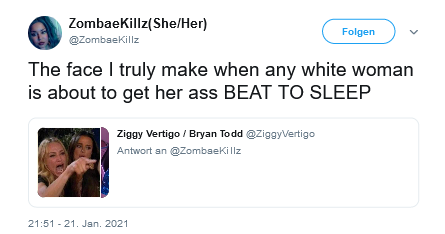 After Zombaekillz’s claim was exposed as false by the aforementioned archive, the @blackgirlgamers account claimed that The Quartering, “a racist troll,” had called “the police to swat [Zombaekillz’s] house.”

The account further asserted that, not only was Zombaekillz “owed an apology,” but that “any brand seen supporting this Quartering person will be held to task.” 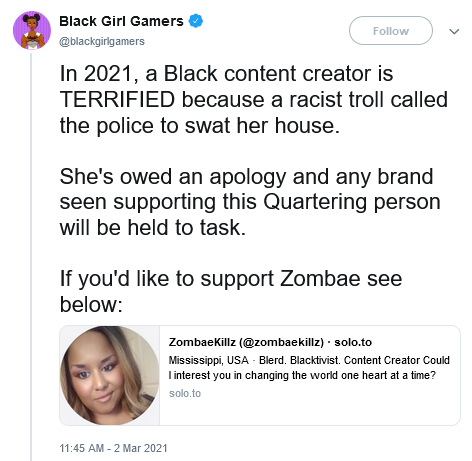 According to the accusations, an unidentified member of The Quartering’s audience supposedly called in a “wellness check” on Zombaekillz in order to troll her through inconvenience.

In response to a tweet from YouTube’s Ryan Wyatt, user SuperDurrio wrote, “Bro, it’s gotten so bad that these a**holes have started to call the cops to her address and telling them it’s a ‘wellness check.'” 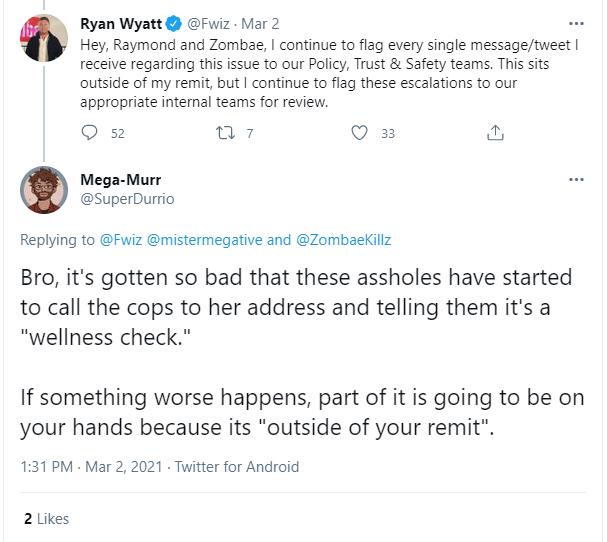 However, as of writing, no evidence of the alleged police visit has been provided by either Zombaekillz or her associates. Additionally, if the call did in fact take place, it appears to have been done so with no prompting or encouragement from The Quartering himself.

Given the recent discourse surrounding policing in the United States, many, including @blackgirlgamers, exaggerated this supposed wellness check as a full on swatting attempt.

“This isn’t the first time the Quartering has done this and now it’s resulted in the swatting of a Black Woman’s house which we know in America can have fatal consequences,” said @blackgirlgamers. “The Quartering has been using his platform for harassment & targeting. We have reported.” 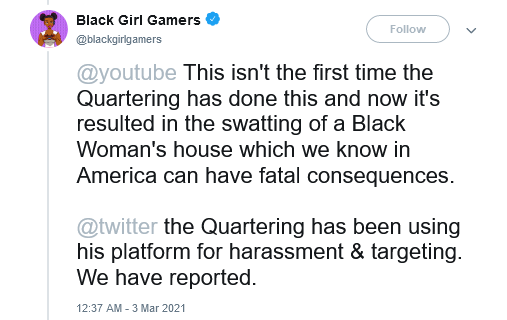 It should be noted that at no time since the leveling of these accusations has anyone, including Zombaekillz and @blackgirlgamers, presented any evidence even supposing The Quartering’s involvement in the call to law enforcement.

Suddenly, as the then-developing situation began to garner widespread attention, The Quartering deleted every tweet he had made since October 1st, 2020, later explaining that he had done so because “using twitter seems to have a very real chance of derailing my Youtube channel.” 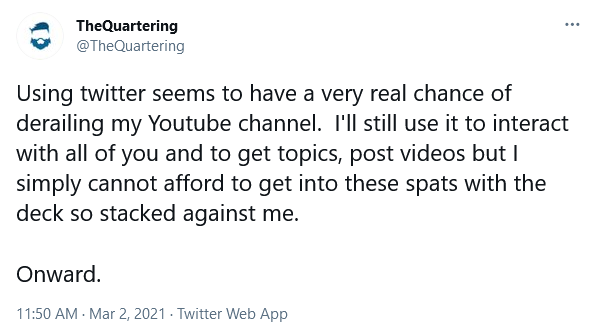 In a short video clip posted to Twitter, The Quartering explained that he was “working with his legal team” [archived version, no live video] to potentially seek legal recourse regarding the accusations.

Later, in a longer and much more proper video response to the accusations, The Quartering stated that they were “an outward attempt to remove me from YouTube, harass my sponsors, and spread vicious lies about me.”

He asked his supporters to provide help both financially and by archiving the various tweets made against him.

Shortly after making the above video, perhaps recognizing the irony of his complaint that his critics were attempting to harass his sponsors, The Quartering apologized for approaching Logitech in the first place.

“I should not of [sic] brought that woman’s, who said the racist shit, sponsor into things,” wrote The Quartering. “That was stupid. I sunk to their level for a moment.”

He claimed that “obviously I didn’t demand they drop her,” and went on to note that he “deleted my tweets on that. That was my f— up.” 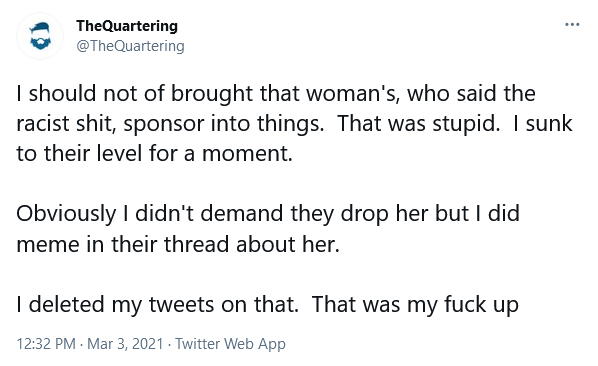 The Quartering would later reveal that he not only had “over 100 emails of archived evidence,” but that “5 different lawyers have contacted me & several newspapers/websites.”

“I really just want all this to stop today and hope it does for all parties involved so we can all just go our separate ways,” wrote The Quartering. “I am ready either way.” 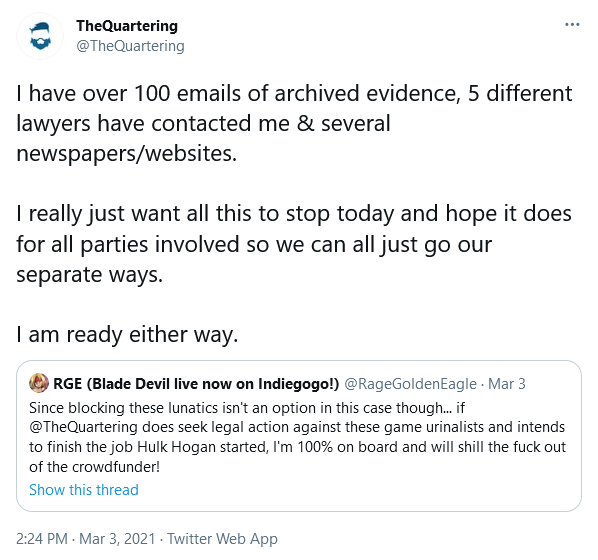 Eventually, as discovered by The Quartering, @blackgirlgamers “deleted their slanderous thread accusing me if swatting.” 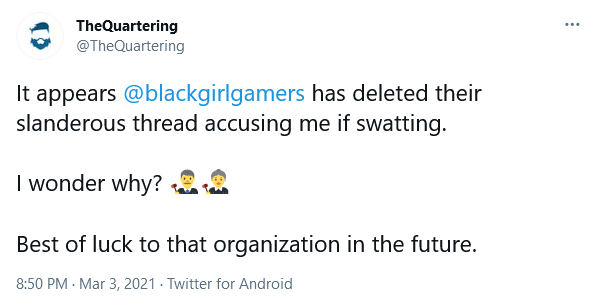 Following this deletion, @blackgirlgamers has made no further mention of The Quartering, nor their accusation of swatting.

What do you make of this entire situation? Let us know your thoughts on social media or in the comments down below!