Twitch streamer ZombaeKillz has responded to the backlash against her identity-based requests for free next-gen consoles with claims of a significant fanbase, as her and her associates continue to call for mass flag campaigns against her critics. 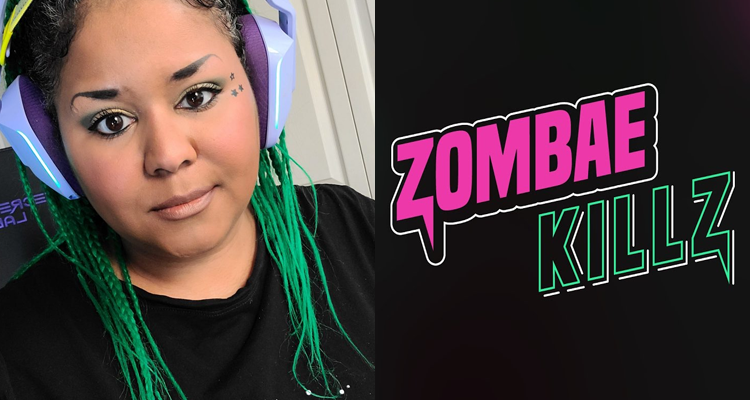 After attention was brought to the initial mass flagging campaign directed by ZombaeKillz, in which the Twitch streamer directed her followers to flag a video made by Griffin Gaming criticizing her requests for an Xbox Series X and PlayStation 5 based solely on her gender and skin color, ZomebaeKillz took to Twitter to push back against her critics, declaring on November 29th that “its finally time for me to talk my shit on my timeline bc the amount of disrespect is out of control.”

ZombaeKillz then proceeded to offer up various social media metrics in defense of why “these companies work with me”, including how her “her “Twitter reach with those low numbers was over 8 million [and] my engagement was 8 percent.” 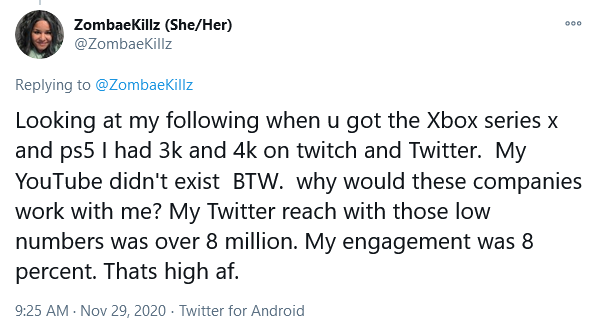 “On [sic] tweet from me has an avg of 1.5k clicks. My selfies get seen by upwards of 50k,” detailed ZombaeKillz. “Now my ratio of people that actually follow me on twitch also almost match. These are great social stats. My conversion rates are lit. And my channels are incredibly fast growing.” 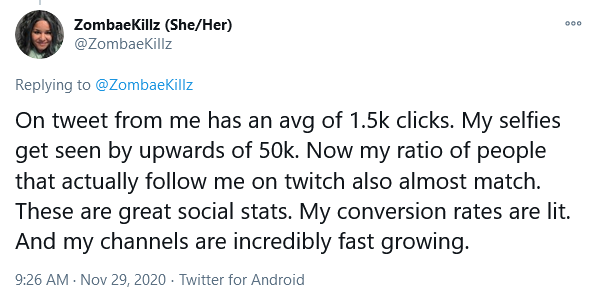 The streamer added that she “had 200 followers in May. 83 followers on twitch,” and asserted that her “growth is a straight upward trajectory.”

“My visibility also has been wild,” boasted ZombaeKillz. “Being featured in national news publications and media and writing for well known publications. So yeah guess I’m a tiny bit qualified.” 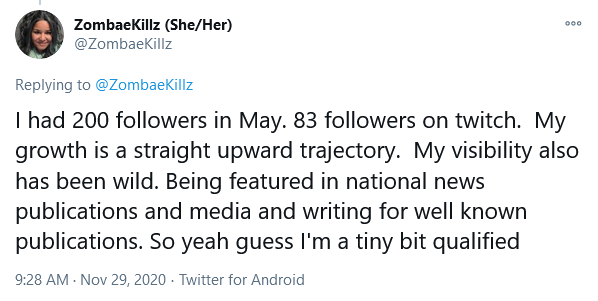 In regard to her specific requests for next-gen consoles, particularly the PlayStation 5, ZombaeKillz claimed that she “didn’t just send a tweet and get a console”, but rather “went thru proper pr channels and emailed Sony [and] pitched them.”

She further explained that she “sent them my deck and stats and waited”, until “they then got back to me said they would review my twitch channel”, to which she “waited more” until Sony “said they liked my content.”

Curiously, only an interaction with Sony is alleged in this recollection, with no mention of any interaction between herself and Microsoft taking place. 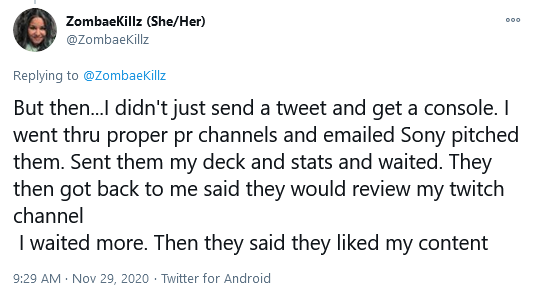 In conclusion to her defense, ZombaeKillz unsurprisingly painted the backlash against her as an issue of misogyny, order her critics to not “f—ing come for me bc I am a woman who sets goals and achieves them.”

“Instead of harassing me you should be learning from me,” she self-righteously concluded. “Which you just did.” 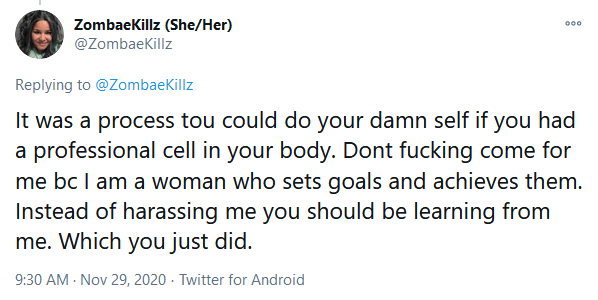 However, while she declared in her multi-tweet statement that she was fully confident that her requests were honored due to her social media reach and not her immutable identity traits, ZombaeKillz and her associates have spent the last few days encouraging mass flag campaigns against their more publicly visible critics, accusing them of spreading lies and disinformation for simply reporting on the factual elements of the ongoing situation.

Following Bounding Into Comics’ coverage of her dispute with Griffin Gaming, Stephanie “Nnesaga” Ijoma, who appeared with ZombaeKillz on a recent Inside Gaming panel, without a hint of irony claimed that the site would “do anything for clout” and called on their followers to “join force and get this reported”. 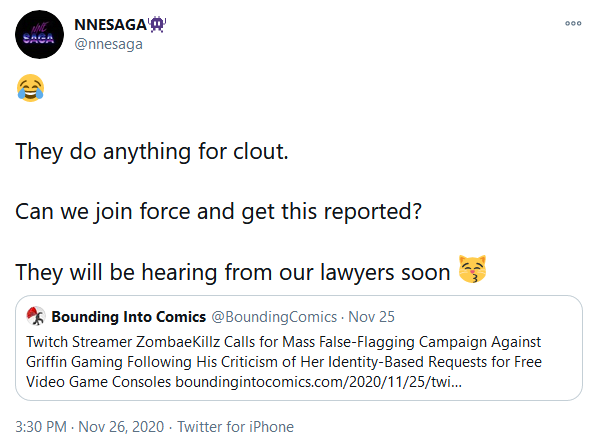 As of writing, neither Bounding Into Comics nor Associate Editor Spencer Baculi, who wrote the article, have received any communication, in any capacity, from either ZombaeKillz, Ijoma, or any of the members of their alleged legal team.

This call was echoed by Zombaekillz on Thanksgiving, as the Twitch streamer declared that the articles was nothing but “lies”, a claim easily disproven by the fact that the article in question is based on and quotes directly from archives of both her and Griffin Gaming’s rhetoric. 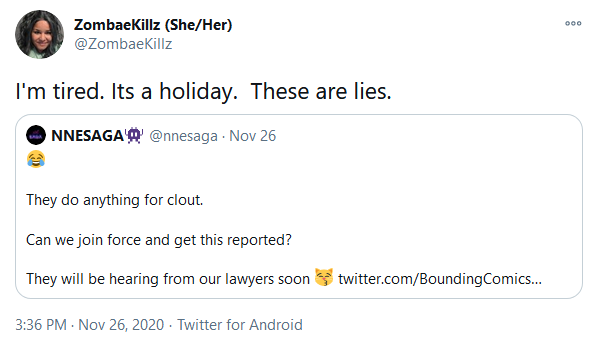 In response to criticism from Hydra Gaming streamer 210LG, himself a fellow black individual, Ijoma again asked that her followers take action to get him “out of here by reporting his video on spreading lies on us,” baselessly accusing him of being “one of griffins minions” and accusing him of “defaming our name and spreading lies.” 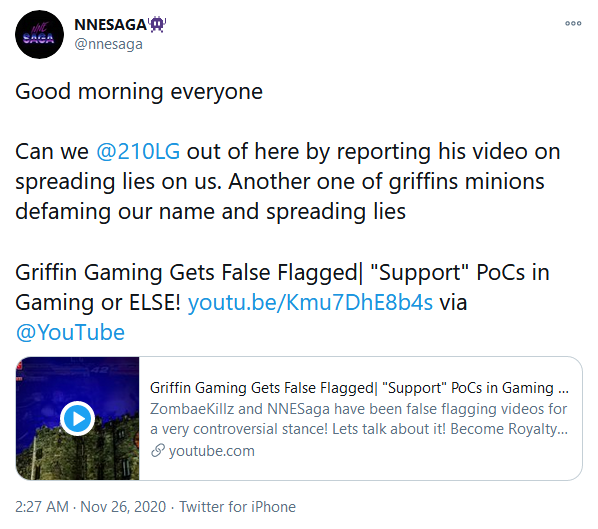 When the story surrounding ZombaeKillz was covered by The Quartering, the official Twitter account for the Super Deluxe Games Cast podcast echoed a call by its founder, John Phipps, to “stop allowing this sloppy bag of shit a place on your platform”, falsely painting the backlash against ZombaeKillz’s mass-flagging orders as coming solely from “channels dedicated to manufacturing outrage against women and minorities” and declaring that they “deserve to be pushed back against at all times”. 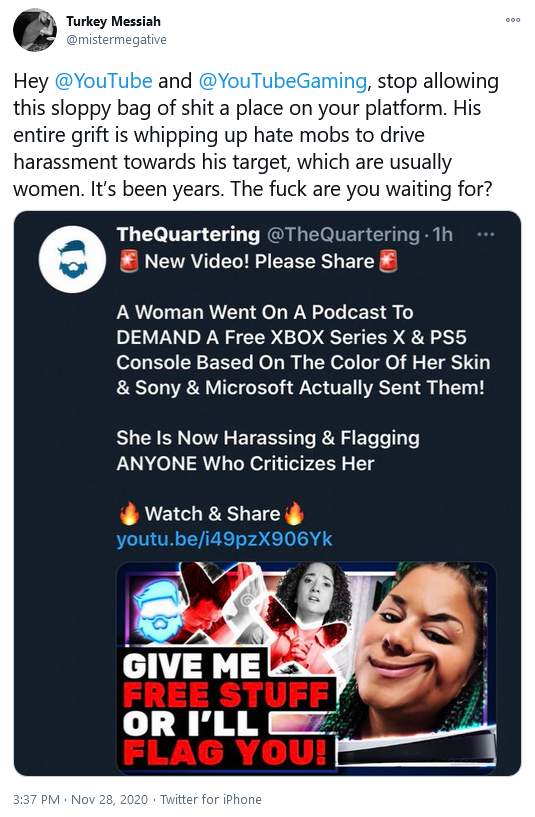 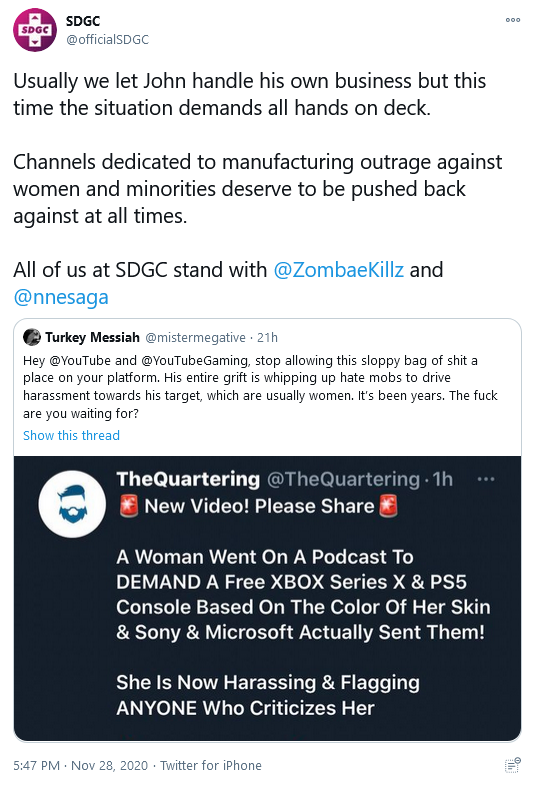 ZombaeKillz then further claimed that The Quartering’s video had “impacted me and my community and made us feel very unsafe” and tagged YouTube Head of Gaming Ryan Wyatt for “help”, to which the YouTube executive thanked her for her “flagging” and informed her that “@TeamYouTube will look into this.”

As of writing, no action has been taken against The Quartering’s channel, but this could change following the completion of Wyatt and YouTube’s investigation.

In addition her direct request to Wyatt to take action against The Quartering, ZombaeKillz also posted a photo of the YouTuber’s Twitter profile, claiming that she was just going to “set this here bc this person is sending very targeted hate our way.” 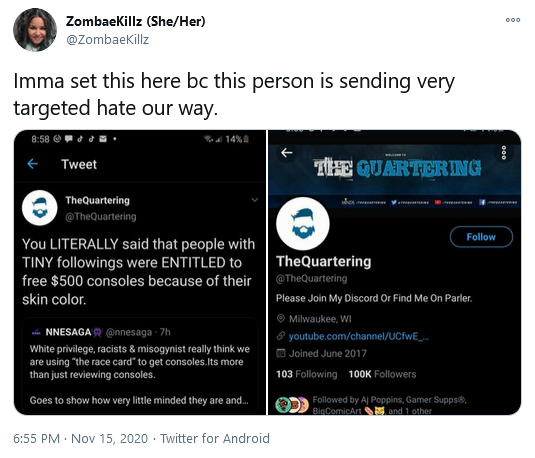 Interestingly, after finding that “black folks” also took issue with her rhetoric, ZombaeKillz found that she was “even more sad”, as she believed she was “fighting for us” in the name of “equity not just something quick and fleeting.”

ZombaeKillz has also explicitly stated that she will be issuing false DMCA flags to “anyone using my photos or likeness thats copyrighted”, though these flags are likely to hold no weight, as the photos being used are publicly posted and available, even being used by the streamer to market herself.

However, unless ZombaeKillz has formally registered her photographs with the United States Copyright Office, no legal action can be taken or penalty enforced against the party using her pictures. Additionally, the use of her publicly posted photos in the process of reporting an ongoing news story would most likely fall under the concept of ‘fair use’.

Prior to her recent Twitter thread, ZombaeKillz informed her audience that she was “currently looking for A PC sponsor, a cosmetics partnership, and an inclusive clothing partnership (size matters).”

“If you’re looking for someone who is kind and outspoken to represent your brand thru a prism of otherness I would love to work with you!” the streamer said in promotion of partnering with her.

What do you make of this latest development? Let us know your thoughts on social media or in the comments down below!