Just a few days ago beloved Looney Tunes characters Lola Bunny and Pepe Le Pew, and specifically their respective roles in Warner Bros.’ upcoming Space Jam: A New Legacy, found themselves targeted by a cancel culture mob made up of SJW snowflakes that can’t stand to have politically incorrect characters in any piece of entertainment media. 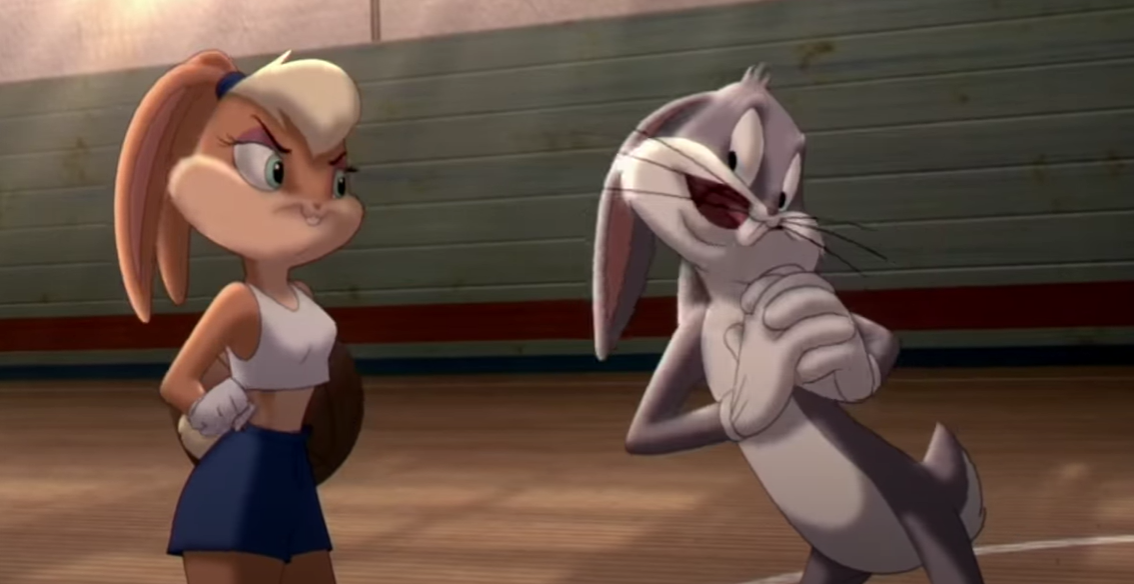 On the one hand we have Lola Bunny, who was first introduced in the 1996’s original Space Jam. Her depiction as an independent, sassy, and quite capable character led her to be well received amongst movie goers.

However, according to director Malcom D. Lee, Lola was not politically correct. As such, Lee has ‘desexualized’ Lola’s appearance, explaining, “This is a kids’ movie, why is she in a crop top? It just felt unnecessary, but at the same time there’s a long history of that in cartoons.”

“This is 2021,” Lee added. “It’s important to reflect the authenticity of strong, capable female characters.” 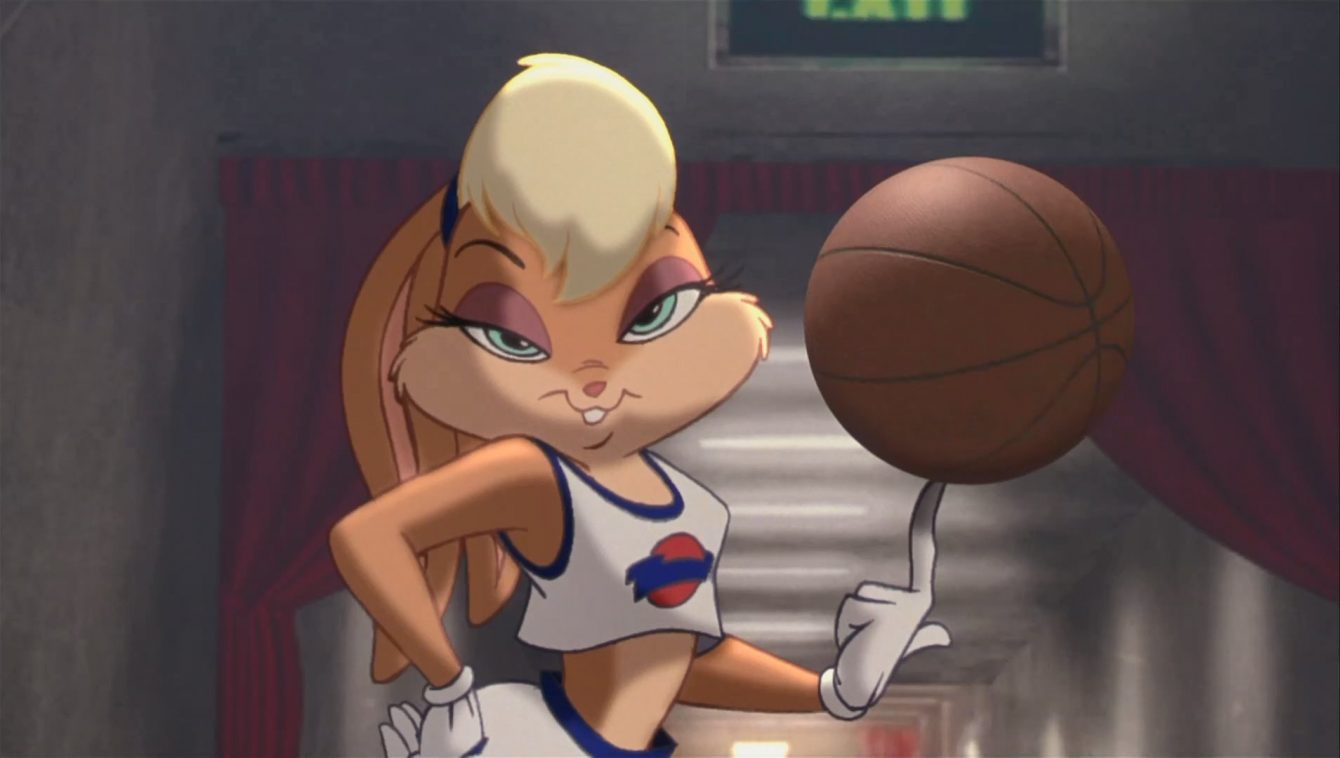 On the other hand is Pepe Le Pew, a staple Looney Tunes character since 1945 and one of the founding members of the Tune Squad.

For reasons that remain unknown, though presumably due to the long-standing complaints that his overbearing attempts at seducing Penelope can be seen as an endorsement of ‘rape culture’, Pew has been completely cut from the Space Jam sequel following the replacement of original director Terence Nance by Lee. 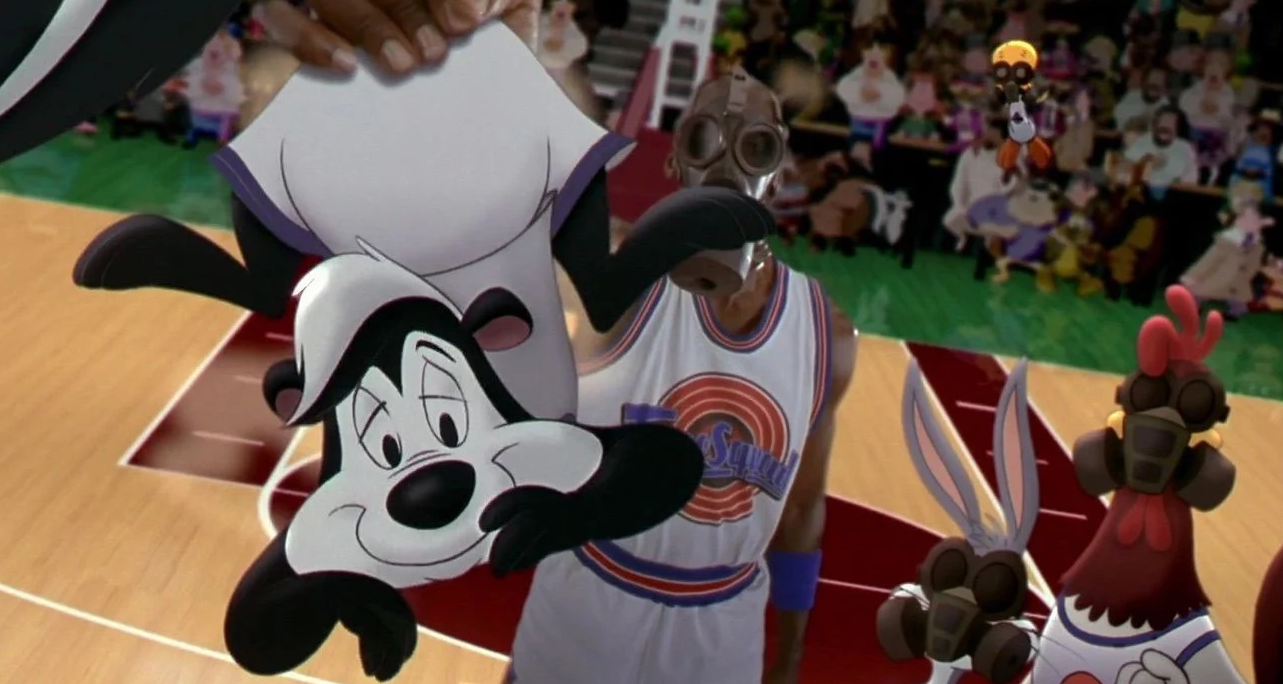 Amidst the cancel culture mob having a field day once it was revealed that Lola Bunny will not be politically correct and that Pepe Le Pew will not appear in the movie at all, stand-up comedian Gabriel ‘Fluffy’ Iglesias took to Twitter to reveal that he’s not fazed by them. Not even in the slightest.

In the upcoming Space Jam: A New Legacy, Iglesias will be playing cheeky Mexican speedster-mouse Speedy Gonzales, a character whom has been targeted by the SJWs in the past for his existence as what they consider to be a harmful stereotype of sorts.

On Iglesias’ official Twitter account he stated that “I am the voice of Speedy Gonzales in the new Space Jam. Does this mean they are gonna try to cancel Fluffy too?” He then went on to mock the cancel culture mob by simply telling them,”U can’t catch me cancel culture. I’m the fastest mouse in all of Mexico.” 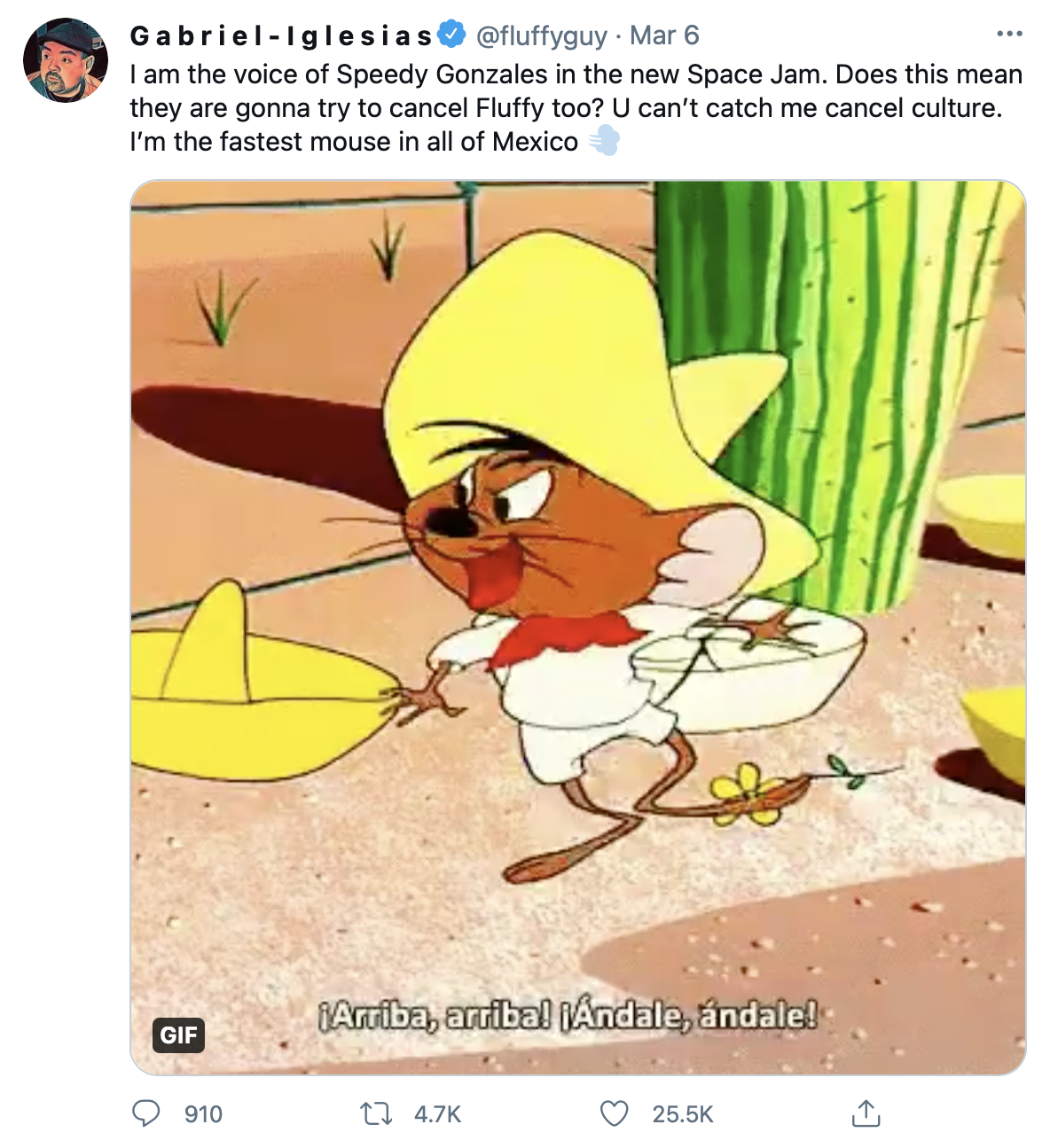 Born and raised in San Diego, California and himself of Mexican descent, Iglesias’ stand-up routines regularly poke fun at Latino stereotypes, not out of spite, but out of love for his roots.

Even if there were some SJW snowflakes out there that were actually getting triggered by Speedy Gonzales — which is more than likely in this day and age — their narrative completely falls apart in the face of the knowledge that not only are their cancellation efforts directed towards someone who is Mexican, but also someone who is not offended by the character’s depiction. 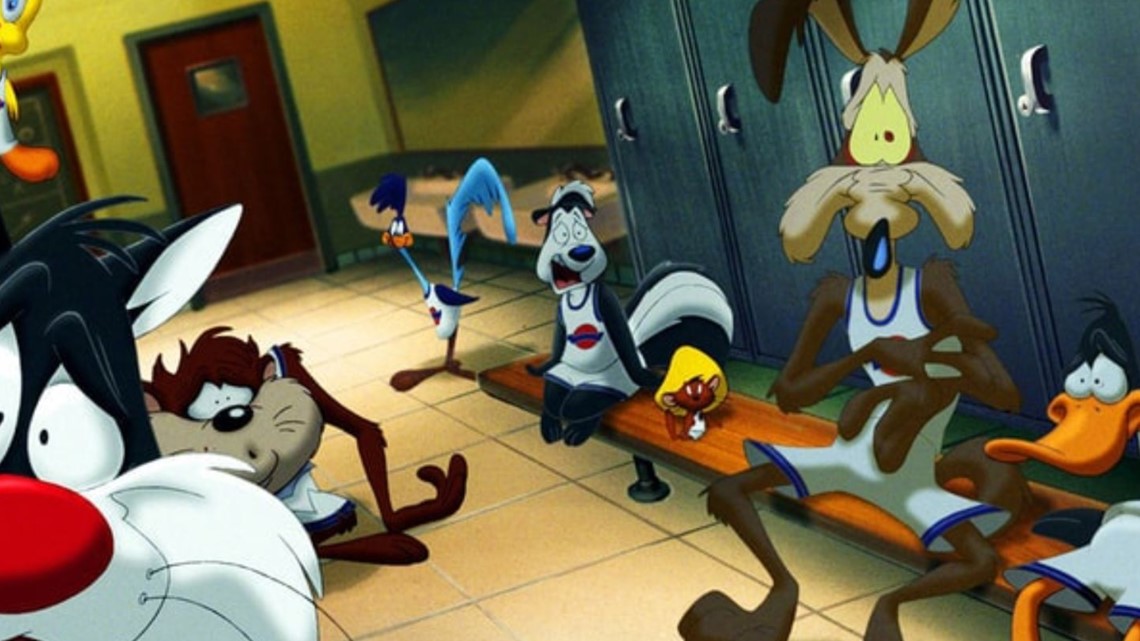 In fact, Iglesias has been getting quite a lot of support for his stance from other Twitter users, some of which also happen to be Mexican and find no offense with Speedy Gonzales (further proof that the ones being offended by the popular Looney Tunes character are likely not even Mexican themselves).

@OfficialATaylor mentioned how Warner Bros. executives “stopped producing his[Speedy Gonzales] shorts during the original Looney Tunes run, but then Mexicans wrote in by hundreds asking for his return.”

“I wish people would stop being outraged for others when the ones who should be outraged aren’t,” he added.

“As a Mexican, we love speedy and I didn’t know you voice him, that’s awesome,” wrote @NicoMyrna_. In response, @Eg7694Gonzales recalled, “You know I had a white teacher in high school that tried to get me to be offended Speedy Gonzales because in his words Speedy Gonzales was disrespectful to our culture I just laughed.” 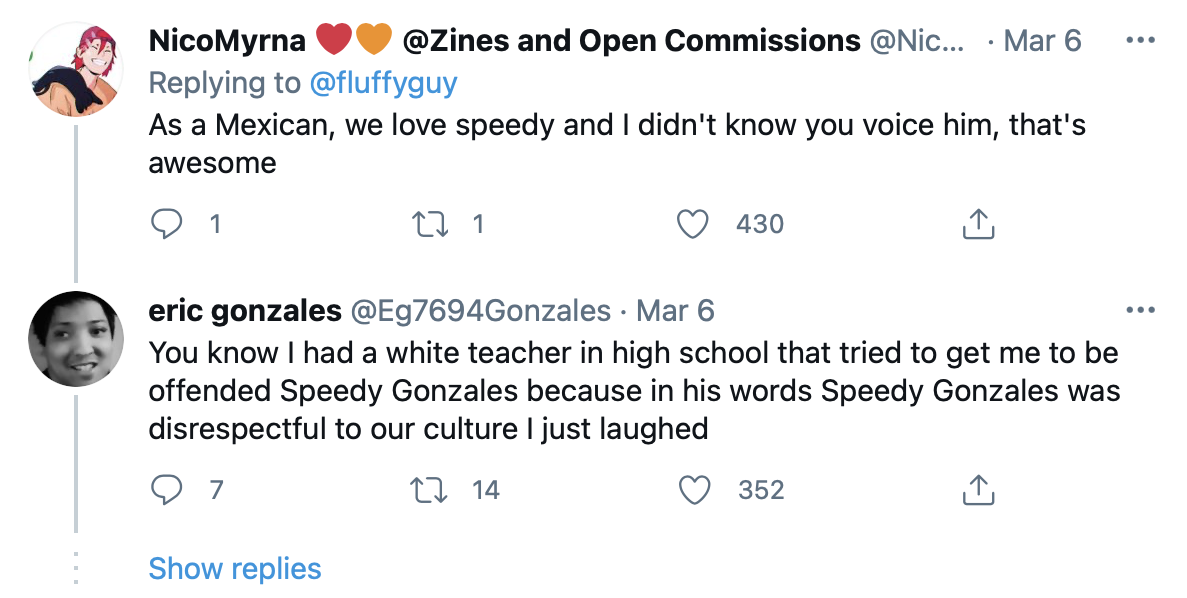 @Austinspada asserted, “As a Mexican, I’ve never ever taken offense in Speedy Gonzalez or its portrayal of México. I’ve always enjoyed him giving that ‘loco gato gringo’ a hard time.” 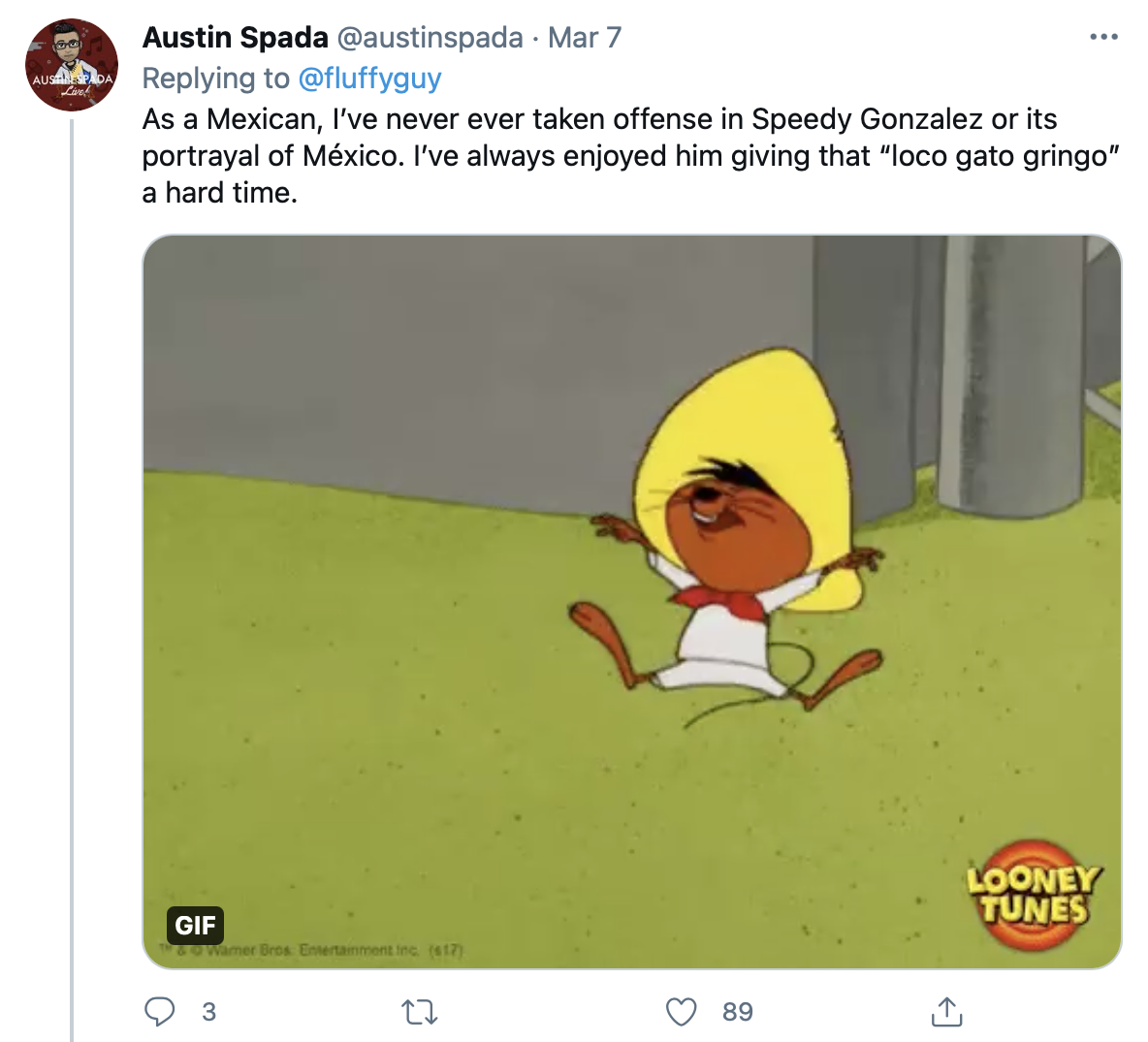 Unsurprisingly, as it is to be expected nowadays,  the SJWs soon decided to chime in and question Gabriel Iglesias’ decision to mock the cancel culture mob by claiming that cancel culture isn’t even real.

Take user Baron5X, for example, who passively aggressively replied to Iglesias, “Dude, cancel culture isn’t a thing and the ppl on here talking smack ‘in your defense’ are all kinds of problematic. I look forward to you playing Speedy but check yourself before you wreck yourself.”

Those replies on the last tweet are pure gold, though, as other users didn’t waste time calling out the hypocrisy that reeks out of a statement that flat out denies that cancel culture exists.

While there are too many to fully catalog here, I suggest you check out the replies to that last tweet. They’re pure gold, as other users wasted no time calling out the hypocrisy that reeked from @Baron5x’s flat out denial of cancel culture’s existence. 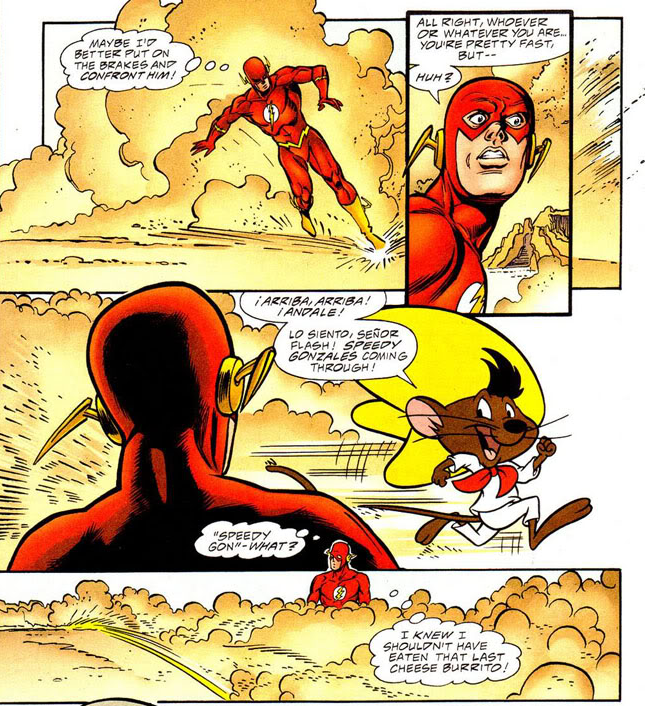 While thankfully Iglesias has not (yet) been targeted for cancellation, it is nice to see him acknowledging that cancel culture exists, especially with the understanding that the character he plays in Space Jam: A New Legacy could face some SJW backlash.

With that said, the wokeness is strong with this new Space Jam, but I personally doubt that Speedy Gonzales could end up being cut from the movie on account of Gabriel Iglesias’ harmless, and inoffensive tweet.

Will you be watching Space Jam: A New Legacy when it becomes available later this year? What do you think of Gabriel Iglesias calling out cancel culture?  Be sure to let us know in the comments section down below.