Speaking with IGN‘s Rebekah Valentine, Sarkeesian lied about the game and publisher Victura.

Sarkeesian, who is described by Valentine as “a critic and as a person connected to Fallujah via her family, with parents born and raised in Iraq and other relatives who were working in Fallujah during the war,” told Valentine, “[‘It’s not political’] is used primarily by creators who are resistant to calls for a more representative video game landscape.”

She then added, “[It’s] a defense most often used to push the most regressive, conservative, and oppressive narratives.” 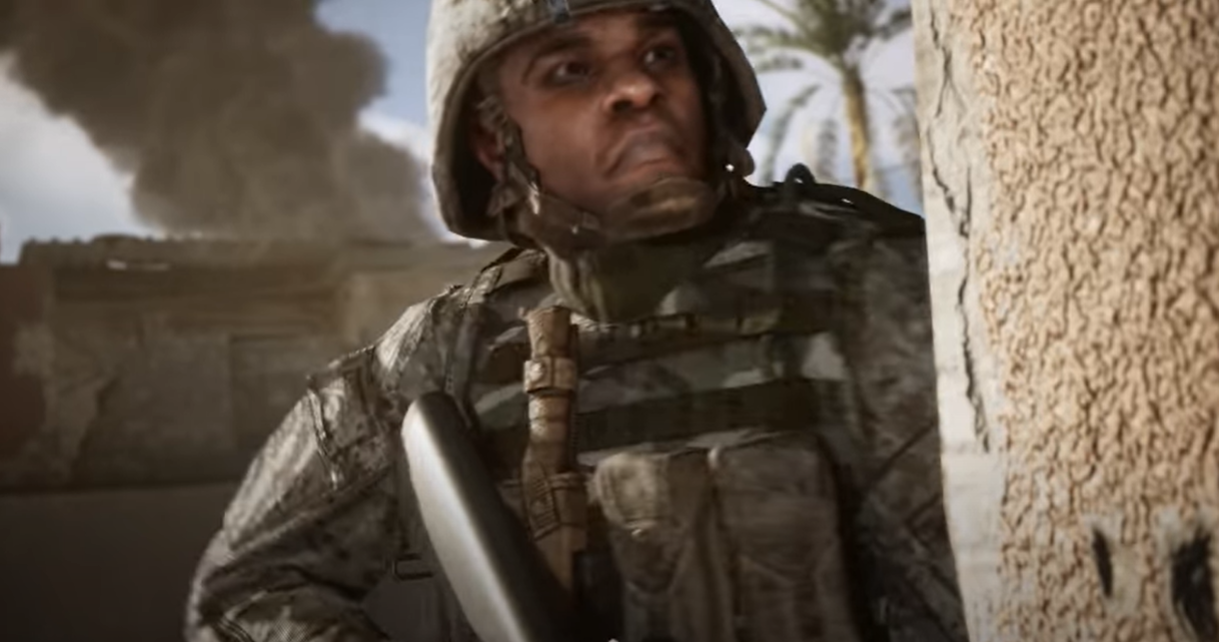 However, Victura never described their game as “not political.” It was Polygon who ran a headline reading, “Six Days in Fallujah ‘not trying to make a political commentary,’ creator says.

In the actual article Peter Tamte, the top dog at Victura, explained, “For us as a team, it is really about helping players understand the complexity of urban combat. It’s about the experiences of that individual that is now there because of political decisions.”

“And we do want to show how choices that are made by policymakers affect the choices that [a Marine] needs to make on the battlefield. Just as that [Marine] cannot second-guess the choices by the policymakers, we’re not trying to make a political commentary about whether or not the war itself was a good or a bad idea,” he added. 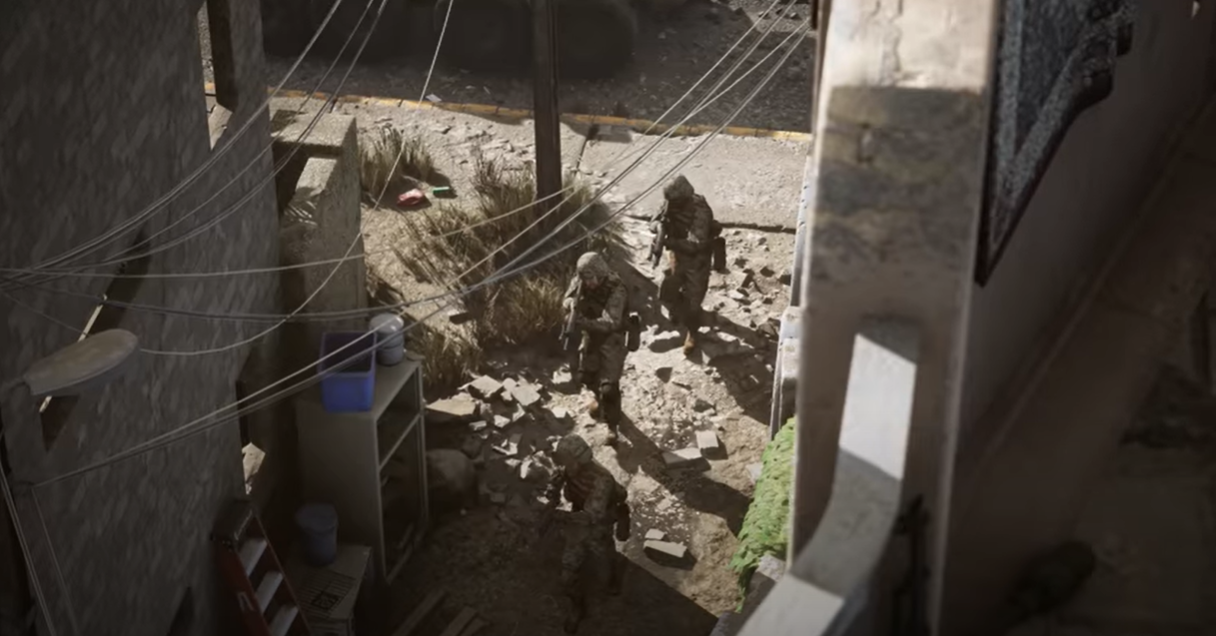 Later in his discussion, Tamte would state, “I don’t think players are going to be confused about the cost [of war].”

Their tweet reads, “We understand the events recreated in Six Days in Fallujah are inseparable from politics.” 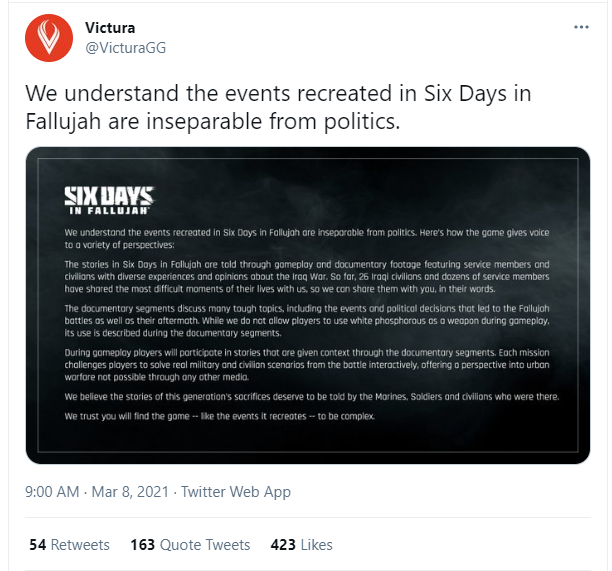 The full statement begins, “We understand the events recreated in Six Days in Fallujah are inseparable from politics. Here’s how the game gives voice to a variety of perspectives:”

It continues, “The stories in Six Days in Fallujah are told through gameplay and documentary footage featuring service members and civilians with diverse experiences and opinions about the Iraq War. So far, 26 Iraqi civilians and dozens of service members have shared the most difficult moments of their lives with us, so we can share them with you, in their words.”

“The documentary segments discuss many tough topics, including the events and political decisions that led to the Fallujah battles as well as their aftermath. While we do not allow players to use white phosphorous as a weapon during gameplay, its use is described during the documentary segments,” the statement reads. 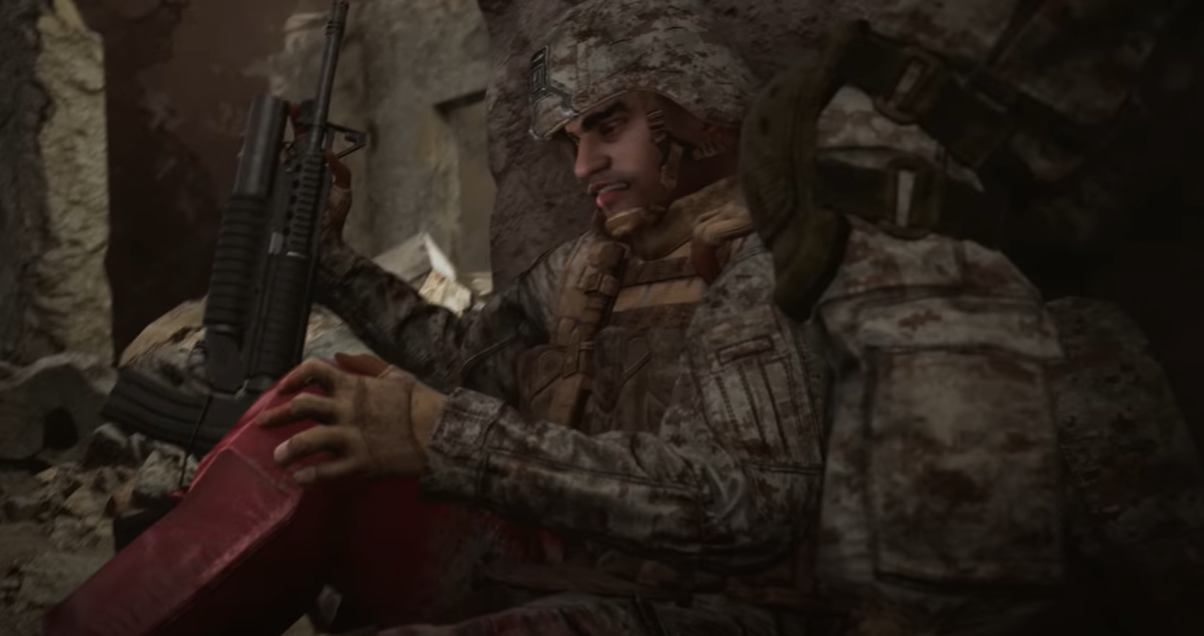 It goes on, “During the gameplay players will participate in stories that are given context through the documentary segments. Each mission challenges players to solve real military and civilian scenarios from the battle interactively, offering a perspective into urban warfare not possible through any other media.”

It concludes, “We believe the stories of this generation’s sacrifices deserve to be told by the Marines, Soldiers, and civilians who were there. We trust you will find the game — like the events it recreates — to be complex.” 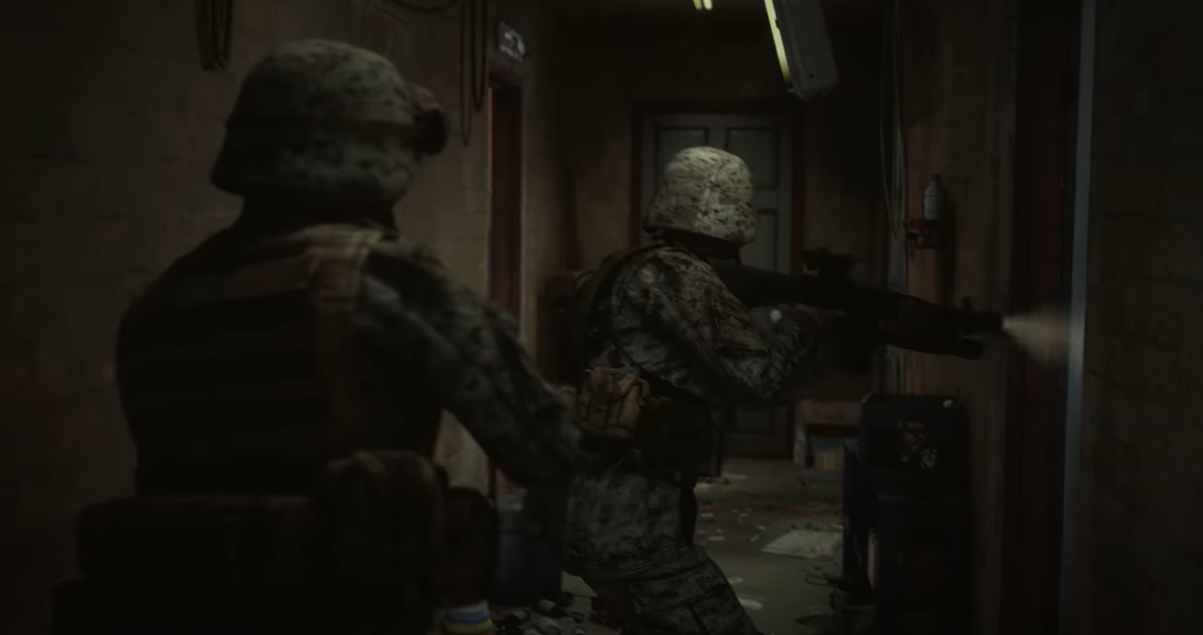 Sarkeesian would react to this statement telling IGN, “The recent statement from Victura articulating that they understand that Six Days in Fallujah is in fact a political game is nothing more than crisis management, whether they actually understand the problems or not.”

She continues, “It doesn’t change that the developers who worked on the game for many years worked on it while believing they were not making a political game.” 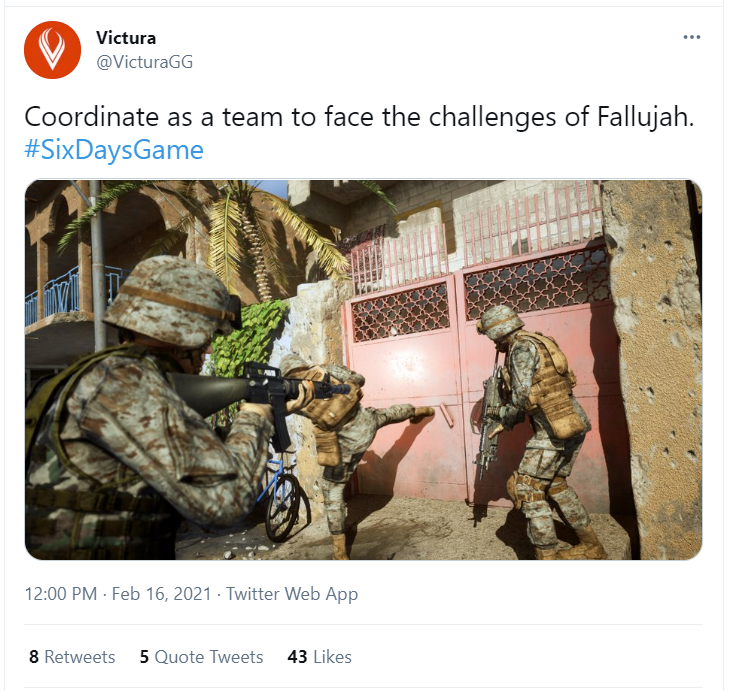 Not only did Sarkeesian lie about Tamte’s comments about the game not being political, but she also revealed she has her own ax to grind and is using the game to push her own political agenda.

Sarkeesian attacked the game stating, “It doesn’t change the fact that this game is perpetuating the status quo of American imperialism and the incredible harm it causes to the rest of the world, and in this case to Iraqis, and Arabs more broadly.”

She went on to comment on the game’s marketing, “The developer statements very carefully acknowledge the Iraqi casualties but they are not providing any context about the fact that the heroes of this story are murdering people who are defending themselves and their homeland, a people who have been targeted repeatedly over the years by world powers, including the US.” 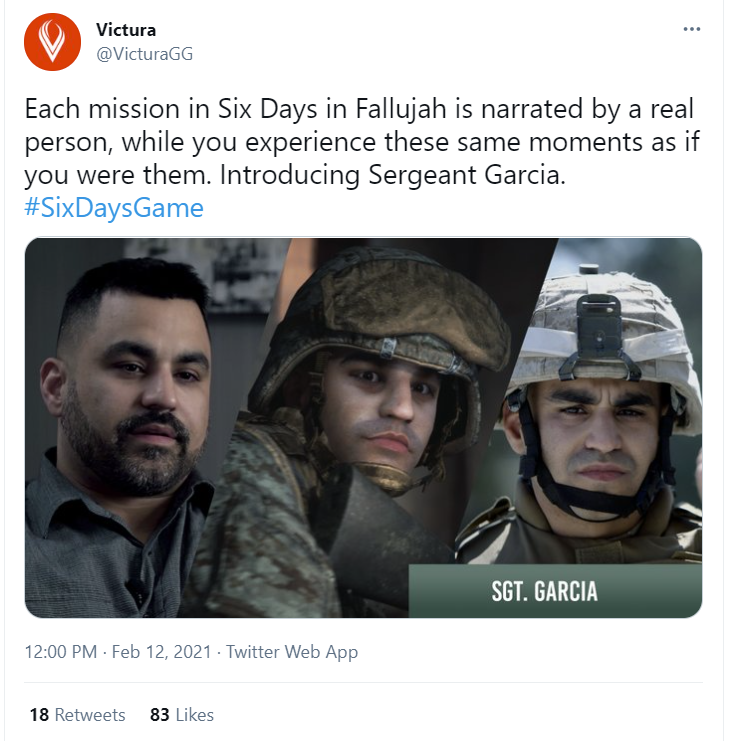 Sarkeesian would also comment about how American media portrays Arabs. She stated, “It is extremely well documented at this point that Arabs in American media have overwhelmingly been portrayed as unhinged terrorists who hate ‘freedom’ and ‘democracy.'”

She continued, “alk about building empathy? Where are the stories about Arabs living their lives, loving sports, mastering a musical instrument, falling in love, finding comfort in their religious or spiritual faith, rebelling against their parents, cooking with their grandparents? Where are the stories that show the very wide array of cultures and countries that we lump into the word Arab?”

“In tandem with narrative media villainizing Arabs, the news media spent decades justifying attacks on the Middle East, so much so that Americans were already primed to accept the 2003 invasion of Iraq as if it was a just, moral, and inevitable action to take,” Sarkeesian concluded. 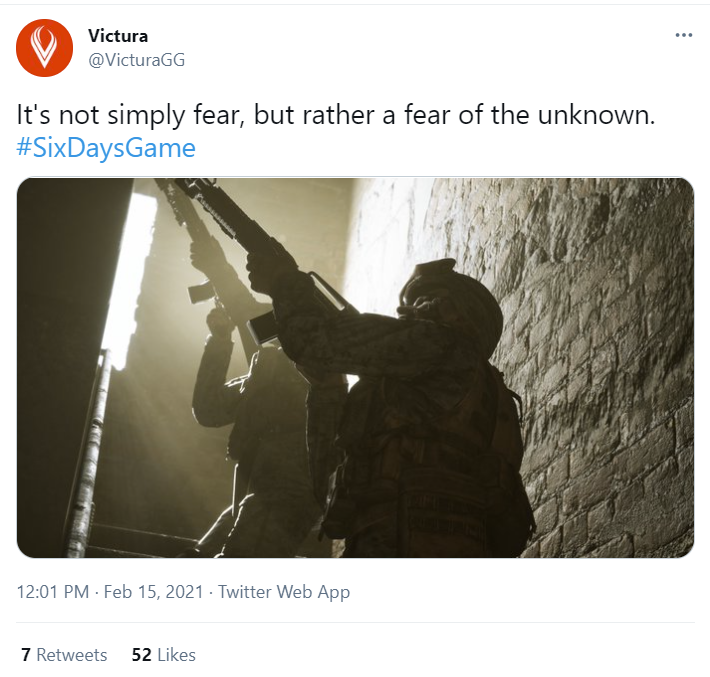 Six Days In Fallujah is expected to be released to PC and consoles later this year.

What do you make of Sarkeesian’s comments regarding Six Days In Fallujah?