YouTube announced today that they will be testing a new design that will hide dislikes from the public. What’s more, the video-sharing website claims that content creator feedback has been taken into account in order to make this decision.

According to this recently revealed information, only some users will see dislikes being hidden from the videos they watch; with YouTube adding that this experiment is only temporary.

“In response to creator feedback around well-being and targeted dislike campaigns, we’re testing a few new designs that don’t show the public dislike count. If you’re part of this small experiment, you might spot one of these designs in the coming weeks (example below!),” reads YouTube’s announcement on their official Twitter account. 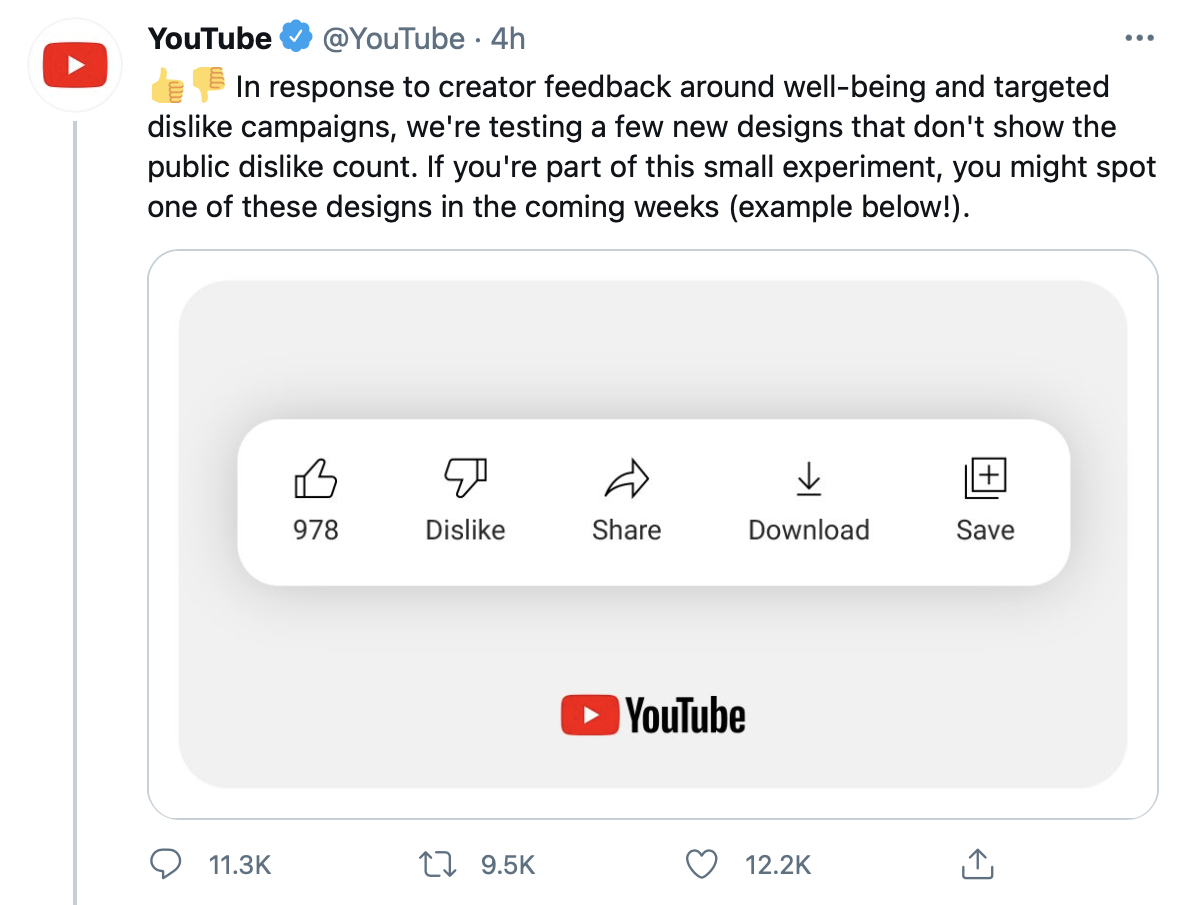 Surprising absolutely no one — except maybe some, if not all, YouTube executives — the announcement was poorly received by content creators, many of whom were quick to point out why the hiding of dislikes will be detrimental to both the website and their ability to produce content.

“No one wants this,” prefaced YouTuber Nerdrotic in a comment regarding YouTube’s announcement. “Dislikes are helpful for a great many things and this is what puts YouTube above all others. By all means keep making decisions without asking a broad cross section of creators. How about making it our choice if you care so much for our well being.”

Twitter user @cyberdeathninja replied to the comment made by Nerdrotic, asserting that “Actually people do want this. The same people that equate reasonable critique as bigoted harassment.”

To be quite fair, that may not be farther from the truth.

YouTube content creator TheQuartering also had something to say about today’s announcement, writing in response to the announcement, “Please do NOT hide my dislikes. They are far more valuable than likes for a myriad of reasons”.

Mutahar, from SomeOrdinaryGamers, also agreed that this new feature YouTube wants to implement is not needed, explaining that being able to see public dislikes is actually useful to him as a content creator.

“We don’t need this feature. Dislikes help in identifying problems in content/creator. S**t I use my own dislike gauge to identify how a video is treated,” reads Mutahar’s tweet. Twitter user @TheSwagnemite61 sarcastically replied, “Yeah but Muta, how are we gonna protect our precious feelings”.

Twitter user @RSTYCG makes quite an interesting question, asking “How will viewers quickly be able to know the general rating of the video and whether or not they should invest time into watching something,” before adding that “Time is valuable,” calling it a “Bad decision,” and proceeding to “Dislike.”

TeamYouTube actually replied, stating that “Viewer feedback is an important part of YouTube, but we’ve heard from creators that the current experience can negatively impact their wellbeing.” 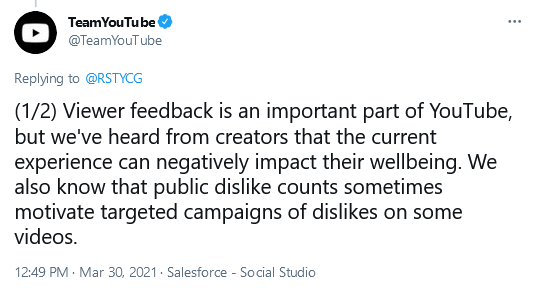 TeamYouTube then attempted to clarify even further, stating that “we’re changing the look and feel of the buttons, but we’ll continue to tune recommendations based on likes and dislikes. Hope this helps clarify.”

Unfortunately for them, they are immediately called out by Twitter user @BillyOwensJr, who stops them in their tracks with a blatant “NOPE. You just don’t want your corporate overlords getting ratioed AF. Amongst other things.”

“Then you wonder why people are jumping to different platforms. You do creators dirty,” the user eloquently added.

This isn’t the first time that the video-streaming platform has disabled dislikes. Some may remember the brief period, sometime after Google+ merged with YouTube, where people were no longer able to dislike comments made by other users. To this day, there is a thumbs down button below every comment, but clicking on it doesn’t seem to do anything.

Interestingly enough, this time around some people are speculating that YouTube has decided to hide public dislikes at the request of other companies, and the name that keeps popping up as most people’s number one suspect is none other than Disney — more specifically, Star Wars.

These days, the majority of videos posted on the official YouTube channel for Star Wars have been getting flooded with dislikes, to the point in which more than half of the people reacting to the videos have decided to dislike them. 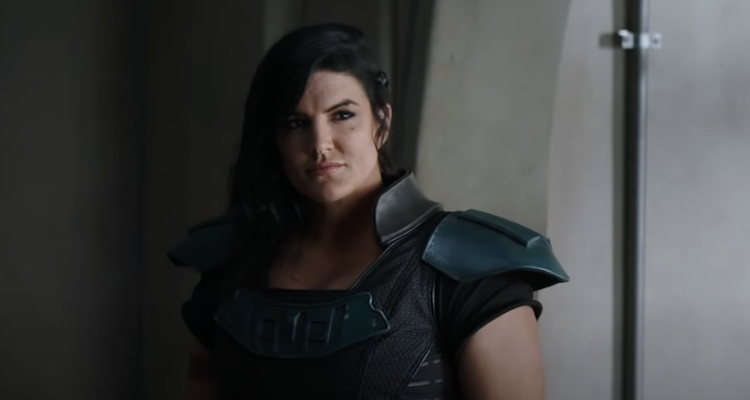 Disney’s Star Wars had been getting backlash from fans regarding their handling of the franchise for some time, but everything got indisputably worse after the firing of Gina Carano. The fact that Disney doesn’t seem to understand what it is that makes Star Wars good hasn’t helped.

“‘Ironically, when Disney fired Gina for her opinions it inadvertently proved her point.’ – Forbes #FireKathleenKennedy” read a large big majority of the comments posted under most on most new videos Star Wars channel/

“‘Don’t ruin my life with lies, when yours can be ruined with the truth’ – Gina Carano​” is yet another popular comment that, likewise, can be found on pretty much every video posted by the Star Wars channel.

Kneon and Geeky Sparkles from Clownfish TV have done a great job breaking this whole thing down, and they have also come to the conclusion that Disney may well be behind YouTube’s recent decision.

“This also has a lot to do with which videos get recommended, because if a video gets review bombed, the way the algorithm is set up now, as I understand it, is a massively downvoted video is not going to get recommended nearly as much as a massively uploaded video,” Kneon explains.

He continues, “And if they’re hiding it, I don’t know if they’re still going to take the downvotes into consideration or just throw the whole damn thing out and just be like: well, whoever’s paying us the most in the add money, they’re the ones who get their videos shown.”

Geeky Sparkles also mentions that not every video uploaded to the Star Wars channel gets downvoted, which is particularly true today, as Disney’s newly released trailer for Star Wars: The Bad Batch was massively and overwhelmingly liked by fans.

While it is true that most of the videos on the Star Wars YouTube channel are getting disliked by the fanbase, videos featuring anything related to Star Wars: The High Republic are the ones that fans are downvoting the most. 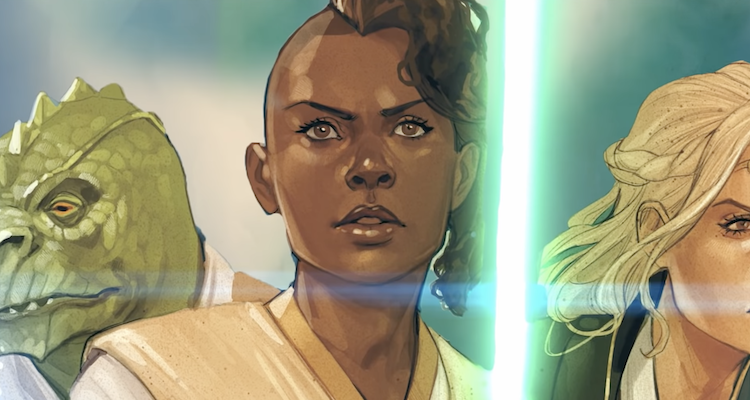 Star Wars: The High Republic has been heavily criticised for pushing a woke political agenda, with every video about this new publishing line on the brand’s channel getting massively downvoted by the Star Wars fanbase even before Carano was fired.

“A Step Into the Dark, Art of The High Republic, and More!” is the latest Star Wars: The High Republic video posted on the official Star Wars channel, and it has over a respectable 32 thousand views, with 1.9k likes and 6.4k dislikes.

As mentioned above, Disney and Lucasfilm released a trailer for Star Wars: The Bad Batch earlier today, and that video has not been disliked by the fanbase. On the contrary, the video has over 500 thousand views, and only 3.1k dislikes, as opposed to a grand total of 55k likes from fans.

After YouTube’s announcement about the new design, and considering the overwhelmingly negative reception that Star Wars videos have been getting on the video-streaming platform, one does wonder whether this “experiment” has been commissioned by Disney.

Of course, this is all but speculation, but the timing does make us raise an eyebrow, since Disney’s Star Wars has been facing quite a lot of backlash lately, and them asking YouTube to disable dislikes on the platform sounds like something they would do.

Unfortunately, this will negatively affect smaller content creators, but it seems big corporations like YouTube and Disney don’t really care about their customers; they have each other to scratch their greedy backs.

What do you make of YouTube disabling dislikes? Do you think it is actually Disney behind these changes? Be sure to let us know in the comments section down below or on social media.