SacAnime has removed Vic Mignogna from their Anime: Roseville event following threats made by “other voice actors, agents, and managers” to boycott the organization’s other conventions if the former Dragon Ball voice actor made an appearance at the upcoming gathering.

Mignogna’s attendance at Anime: Roseville, a ‘swap meet’-style anime fan event set to take place on June 6th at the Roebbelen Center in Roseville, CA, was first confirmed on April 20th by SacAnime themselves.

They heralded the voice actor for having “been in more than four hundred animated series and video games” and specifically for providing the voice of “Edward Elric in Fullmetal Alchemist.” 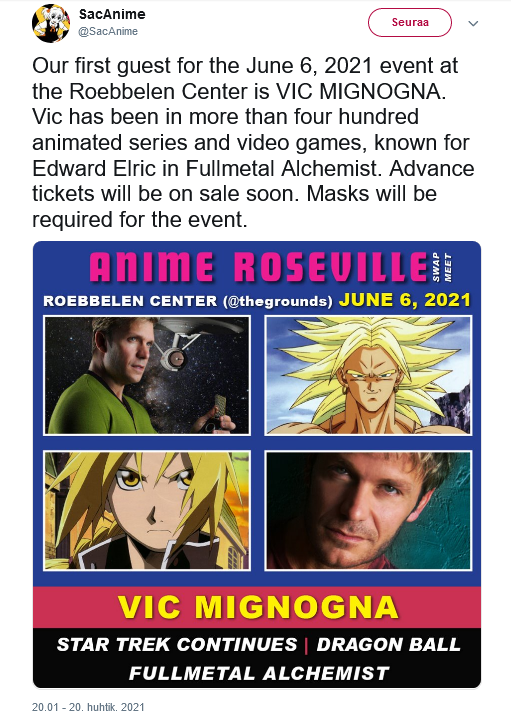 Like clockwork, the announcement of Mignogna’s attendance soon met a wave of vocal opposition from members of the #KickVic movement, including a number of familiar anti-Vic activists.

Star Trek Audiobook Producer Emmett Plant, hot off of his successful campaign to remove Mignogna from the guest list for the ‘55-Year Mission Tour’ Las Vegas-based Star Trek convention, offered to again recount how he supposedly “saw Vic grab a woman without her consent at a convention.”

“I am just showing photos of documents in the lawsuit Vic Mignogna filed against a major recording studio 2 respected actors and me a mortgage guy,” wrote Ron Toye, whose wife, Monica Rial, was one of the first Western anime voice actors to accuse Mignogna of misconduct. “He lost so bad he was sanctioned for it. I mean his friend even said he was creepy but your choice.” 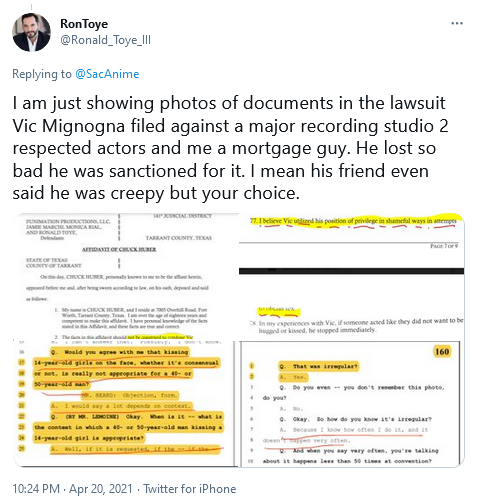 In a change of pace from the usual accusations of sexual misconduct, social media personality Kaylyn “MarzGurl” Saucedo opted to criticize Migogna for his “distrust of masks” and the fact “that he has removed his mask and taken photos face-to-face with attendees despite those events’ mask requirements.” 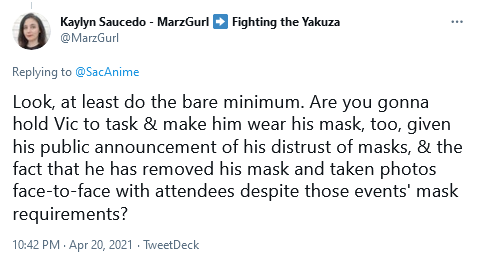 However, despite a counter-outpouring of support from Mignogna’s fans, SacAnime would eventually inform anime fan Jeff Saiyan that the backlash had led them “to cancel Vic from the convention as of this morning.” 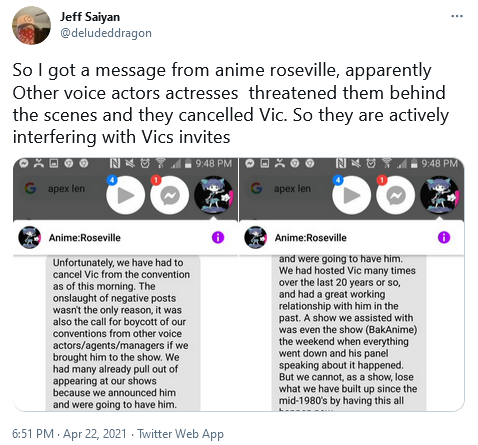 “The onslaught of negative posts wasn’t the only reason,” explained SacAnime from the official Anime: Roseville Facebook account. “It was also the call for boycott of our conventions from other voice actors/agents/managers if we brought him to the show. We had many already pull out of appearing at our shows because we announced him and were going to have him.” 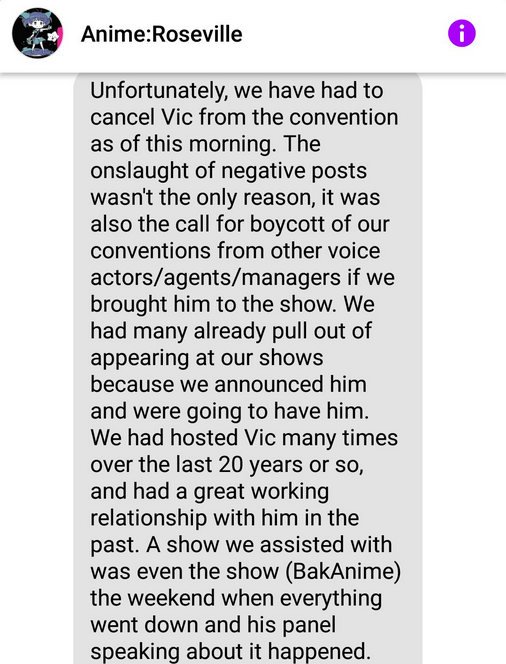 In light of the threat to their business and despite admitting that they “had hosted Vic many times over the last 20 years or so and had a great working relationship with him in the past,” SacAnime then stated that “we cannot, as a show, lose what we have built up since the mid 1980’s by having this all happen now.”

“We thank you for your message and want to have him at our show, but we cannot have him appear at our show,” concluded SacAnime. “So, yes, we have had to withdraw him from appearing at our show.”

What do you make of SacAnime’s decision to uninvite Mignogna from Anime: Roseville? Let us know your thoughts on social media or in the comments down below!