After denouncing the entirety of ComicsGate as an “Alt-Right” hate group, veteran comic book artist J. Scott Campbell has issued an apology for painting “the entire group with the same brush,” explaining that his initial statement was inspired by how “some individuals who were making hateful and bigoted attacks were doing so in the name of CG.” 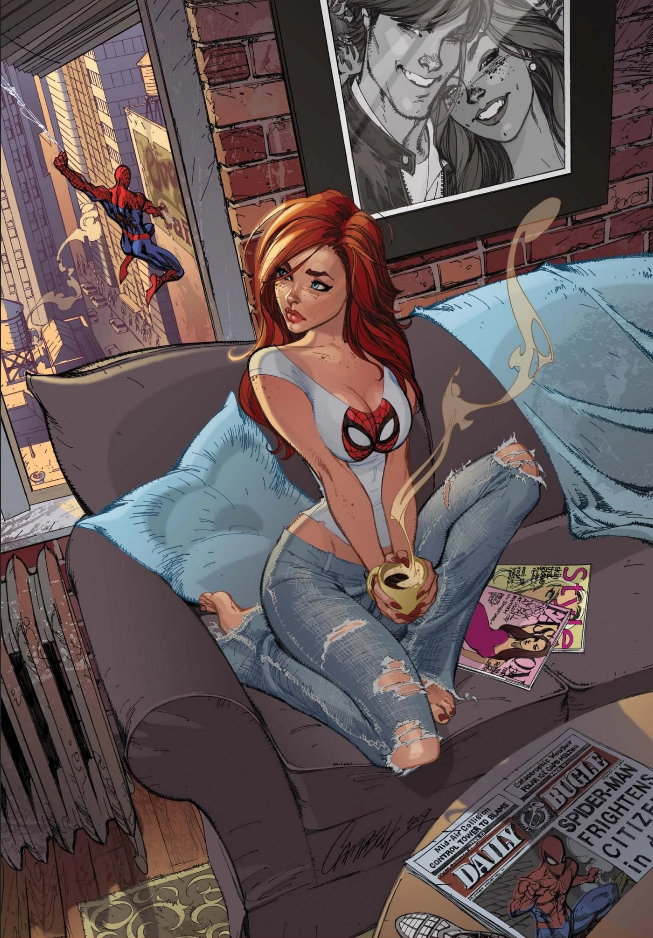 Several days after he refuted a Tumblr artist’s ‘fix’ of his The Amazing Spider-Man #601 cover artwork featuring Mary Jane Watson with a counter-critique of his own in his now infamous ‘The FIX is In’ thread, Campbell took to his various social media accounts to issue another statement on the matter, this time directed towards those involved in the discourse surrounding his posts.

After noting that it had “been brought to my attention that there are some bigoted, hateful and completely over the line comments buried in my “The FIX is In” thread,” and explaining that some of the comments may still be found under his posts due to him being physically unable to monitor every comment thread, Campbell appeared to draw a connection between the alleged bigotry and the ComicsGate movement. 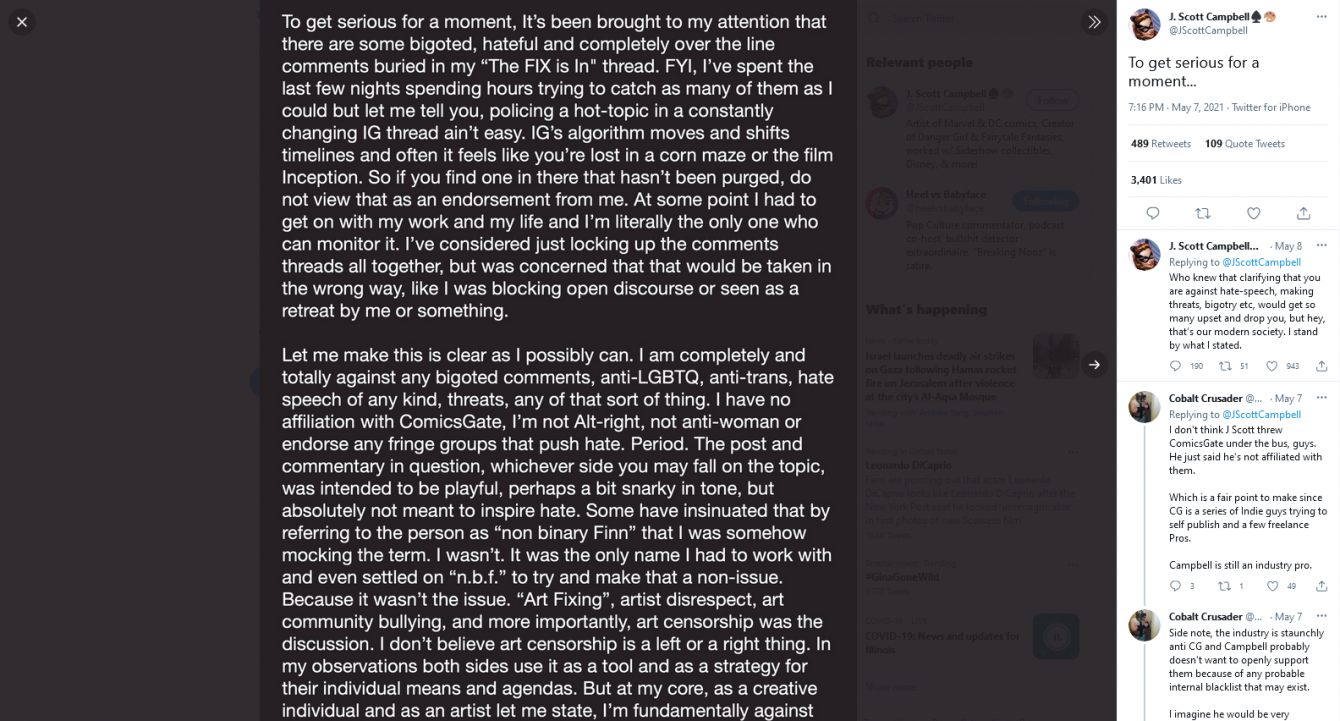 “Let me make this is [sic] clear as I possibly can,” wrote Campbell. “I am completely and totally against any bigoted comments, anti-LGBTQ, anti-trans, hate speech of any kind, threats, any of that sort of thing.”

He continued, “I have no affiliation with ComicsGate, I’m not Alt-right, not anti-woman or endorse any fringe groups that push hate. Period. The post and commentary in question, whichever side you may fall on the topic, was intended to be playful, perhaps a bit snarky in tone, but absolutely not meant to inspire hate.” 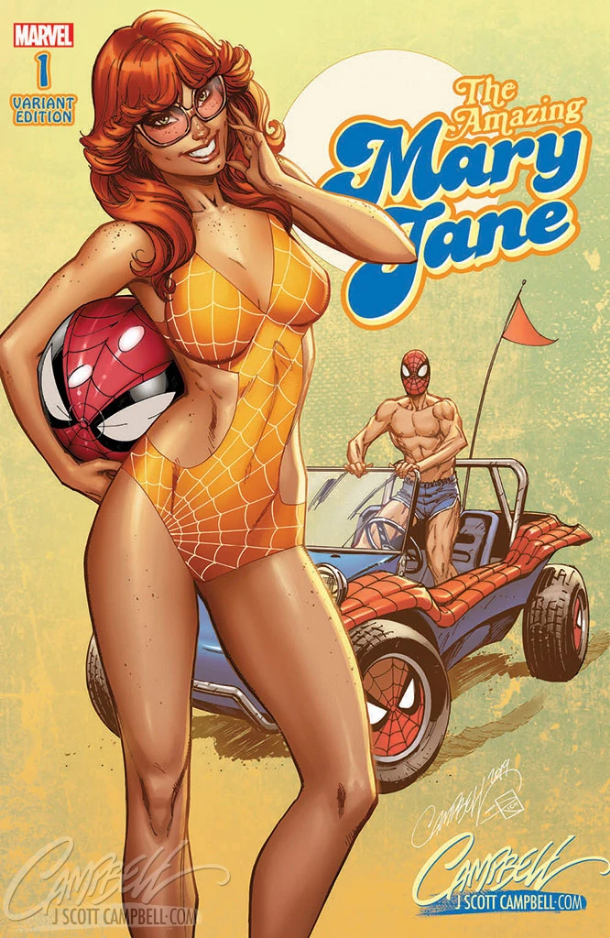 He continued,  “Some have insinuated that by referring to the person as ‘non binary Finn’ that I was somehow mocking the term.”

Campbell clarified, “I wasn’t. It was the only name I had to work with and even settled on ‘n.b.f.’ to try and make that a non-issue.”

“Because it wasn’t the issue,” he declared. “‘Art fixing’, artist disrespect, art community bullying, and more importantly, art censorship was the discussion.” 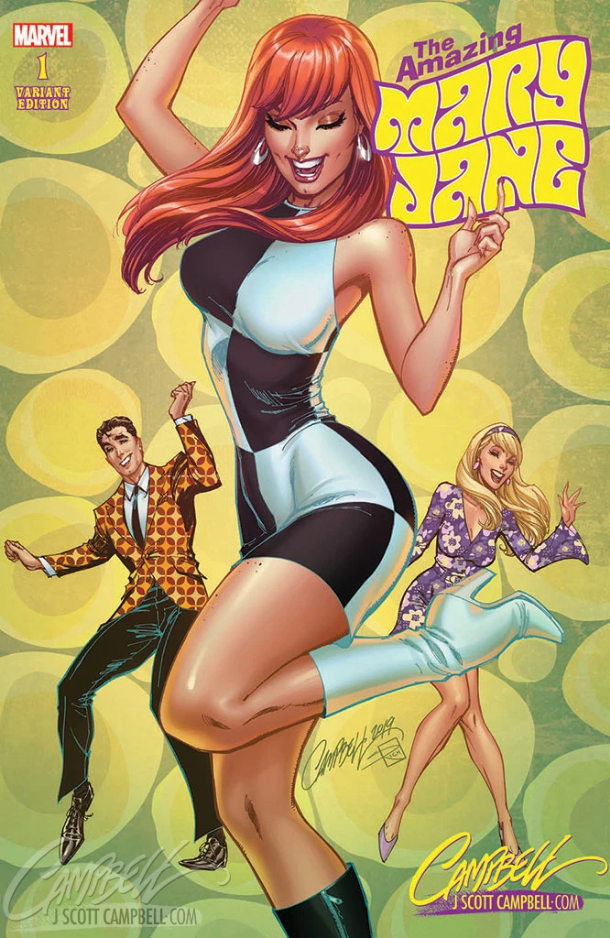 “I don’t believe art censorship is a left or a right thing,” further explained Campbell. “In my observations both sides use it as a toll and as a strategy for their individual means and agendas. But at my core, as a creative individual and as an artist let me state, I’m fundamentally against censorship and being told in general what I can and cannot draw, by any group, political or otherwise.”

“Just because I’m at odds with a lot of the extreme viewpoints and attempts at censorship of my art from the left, doesn’t mean I’m in alignment with the alt-right and hate speech either,” he asserted.

“I know we’re lead [sic] to believe that the current landscape is an either/or. You’re either with us or against us. It’s black or it’s white. It’s not,” Campbell said. 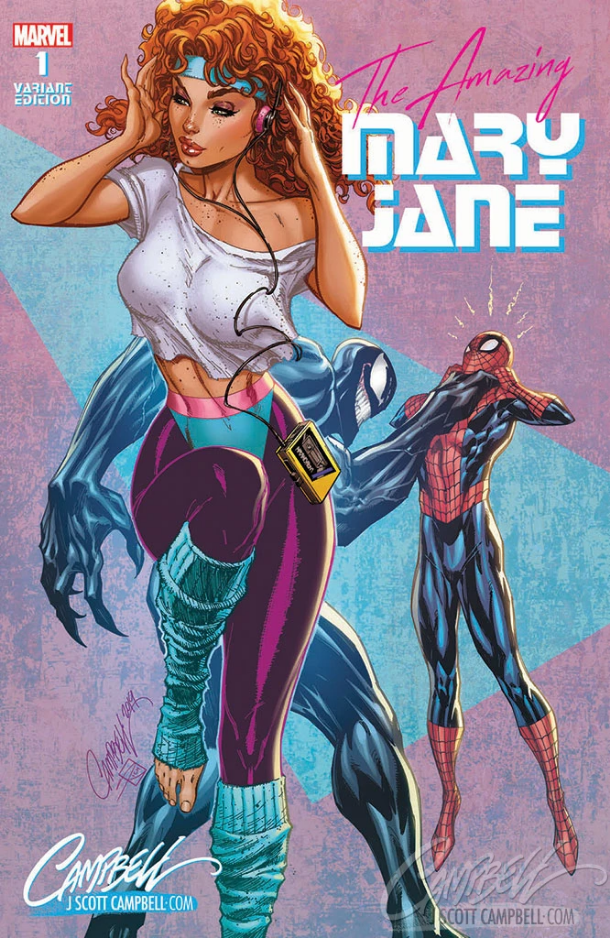 “This isn’t the presidential election. There can be and there are many shades of gray in regards to all kinds of different topics and as an artist in this modern world, I find myself feeling I’m somewhere in the middle. And I feel a lot of us are feeling that way these days,” he elaborated. 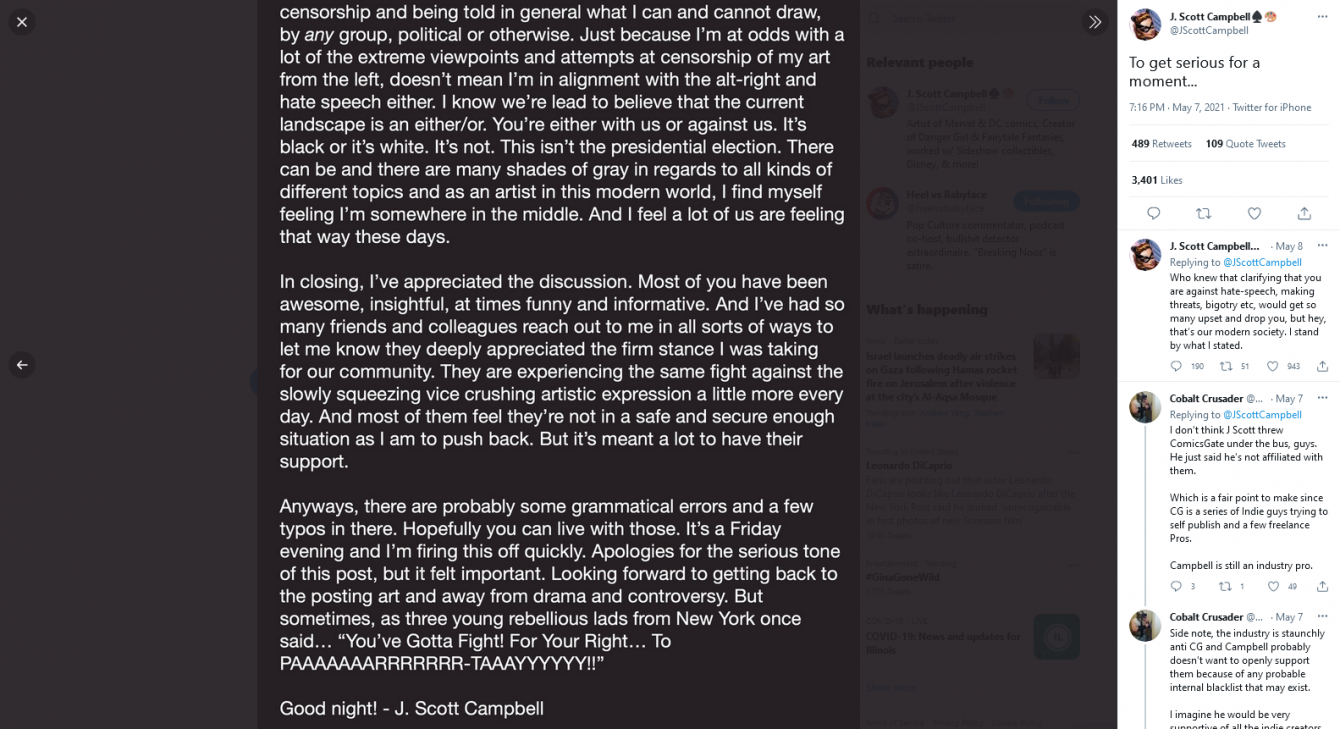 After facing an understandable outpouring of backlash from ComicsGate supporters, many of whom cordially attempted to clear up Campbell’s misconceptions about the group, the artist followed up his initial statement with a Tweet stating, “Who knew that clarifying that you are against hate-speech, making threats, bigotry etc, would get so many upset and drop you, but hey, that’s our modern society. I stand by what I stated.”

“A lot of people threw support behind you and your freedom to create,” replied YouTuber Heels vs Babyface to Campbell, attempting to explain to the artist the reasoning behind the backlash. “Then got labelled alt right or anti this or that. And you likely got pressured into your statement by the very people who have torn mainstream comics apart. I like your work a lot but you bit the hand that feeds.” 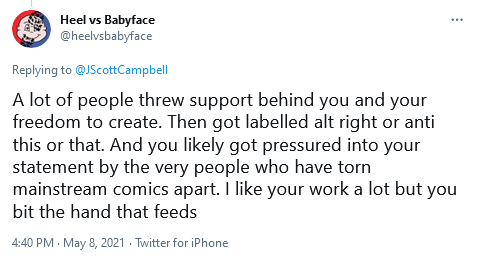 Campbell in turn dismissed the YouTuber’s explanation, telling him, “If you self-identify with hate-speech than I’m sorry you got your feelings hurt. For all you know, I could’ve also been shaming the hate speech that I saw from the left too. Nothing about drawing sexy ladies identified me with either political stance.” 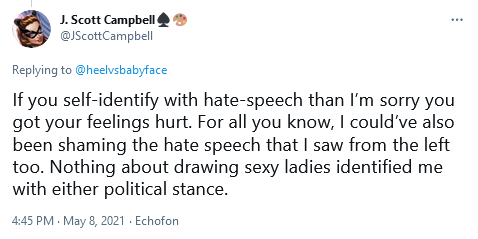 This particular discourse went on for some time, with Campbell engaging in various discussions on the subject with a number of individuals who considered themselves affiliated with ComicsGate in some way, shape, or form.

Eventually, two days after his initial statement, Campbell posted yet another lengthy statement to his social media, this time offering a “clarification” to his statements regarding the entirety of the ComicsGate movement. 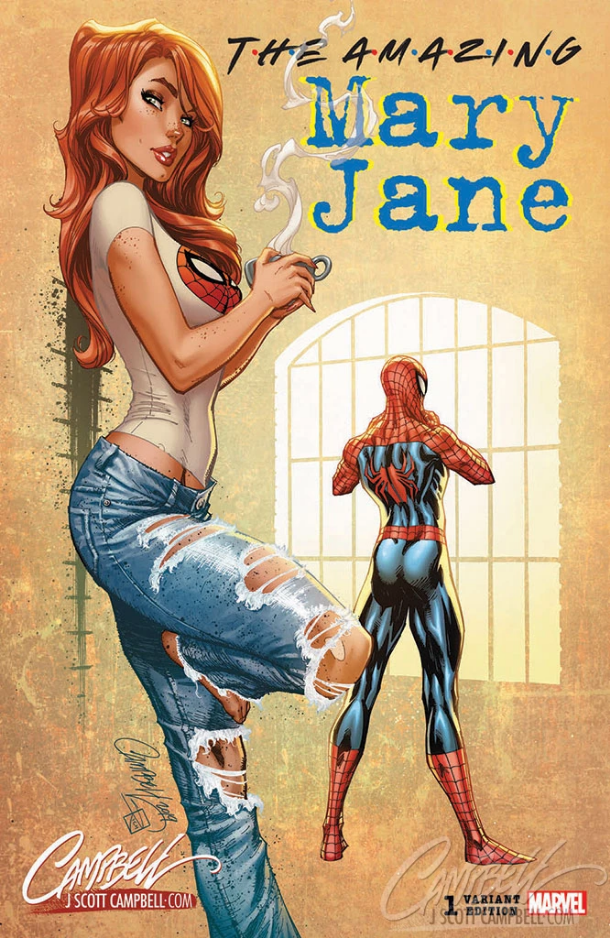 “I’ve taken the time to hear out several individuals who felt I painted them in a poor light when I made my statement about the divisive and heated rhetoric hidden within my message threads on Instagram and Twitter this past week,” wrote Campbell.

“Some clarification that I feel is important,” he added. “What I was stating earlier is that I am not comfortable being implicated or included into a group, any group, without my consent, regardless of the group.” 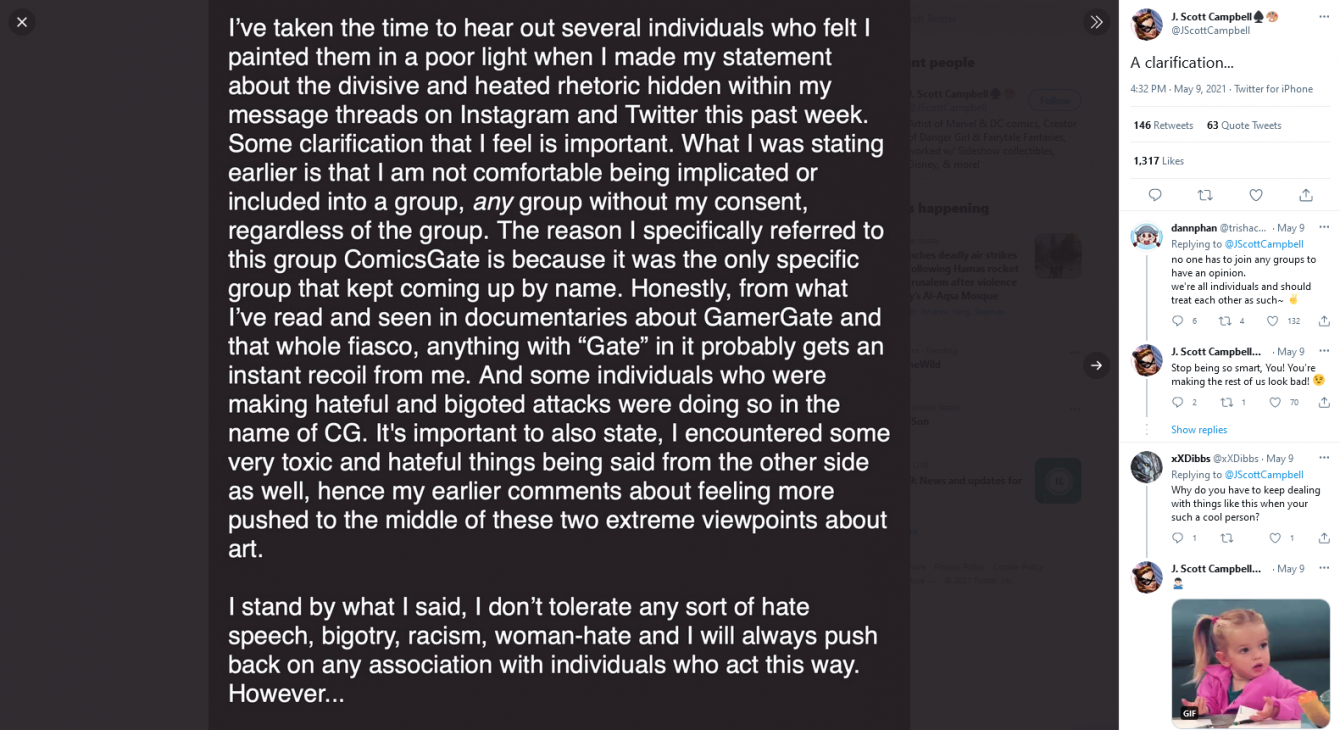 Campbell then explained, “The reason I specifically referred to this group ComicsGate is because it was the only specific group that kept coming up by name. Honestly, from what I’ve read and seen in documentaries about GamerGate and that whole fiasco, anything with ‘Gate’ in it probably gets an instant recoil from me.”

“And some individuals who were making hateful and bigoted attacks were doing so in the name of CG,” he then claimed. “It’s important to also state, I encountered some very toxic and hateful things being said from the other side as well, hence my earlier comments about feeling more pushed to the middle of these two extreme viewpoints about art.” 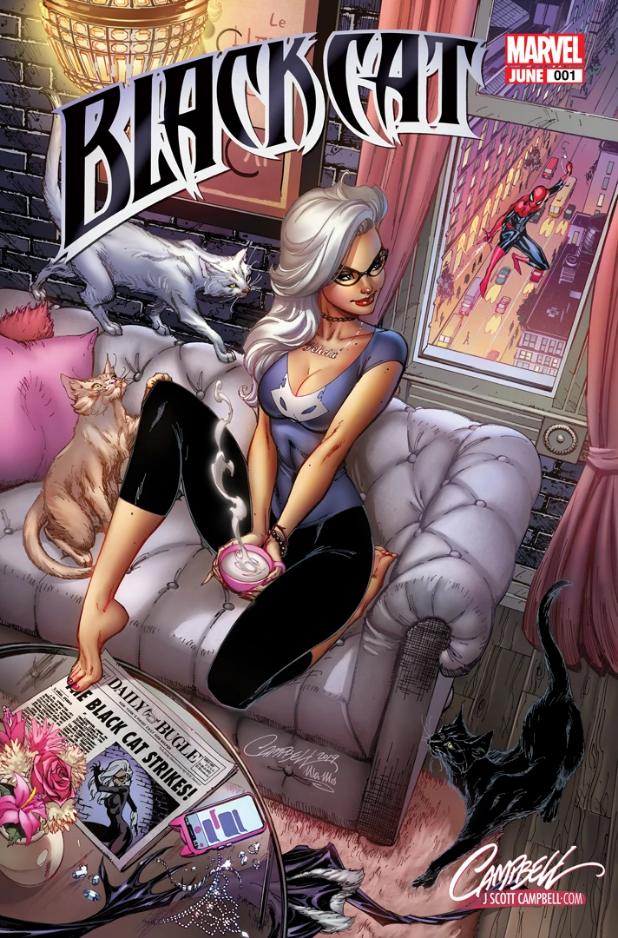 Campbell next stated, “I stand by what I said, I don’t tolerate any sort of hate speech, bigotry, racism, woman-hate and I will always push back on any association with individuals who act this way.”

“However,” he added, “if individual members of this ComicsGate community adamantly insist that’s not what they stand for, I feel I should give these folks the benefit of the doubt and take them at their word and not paint the entire group with the same brush.” 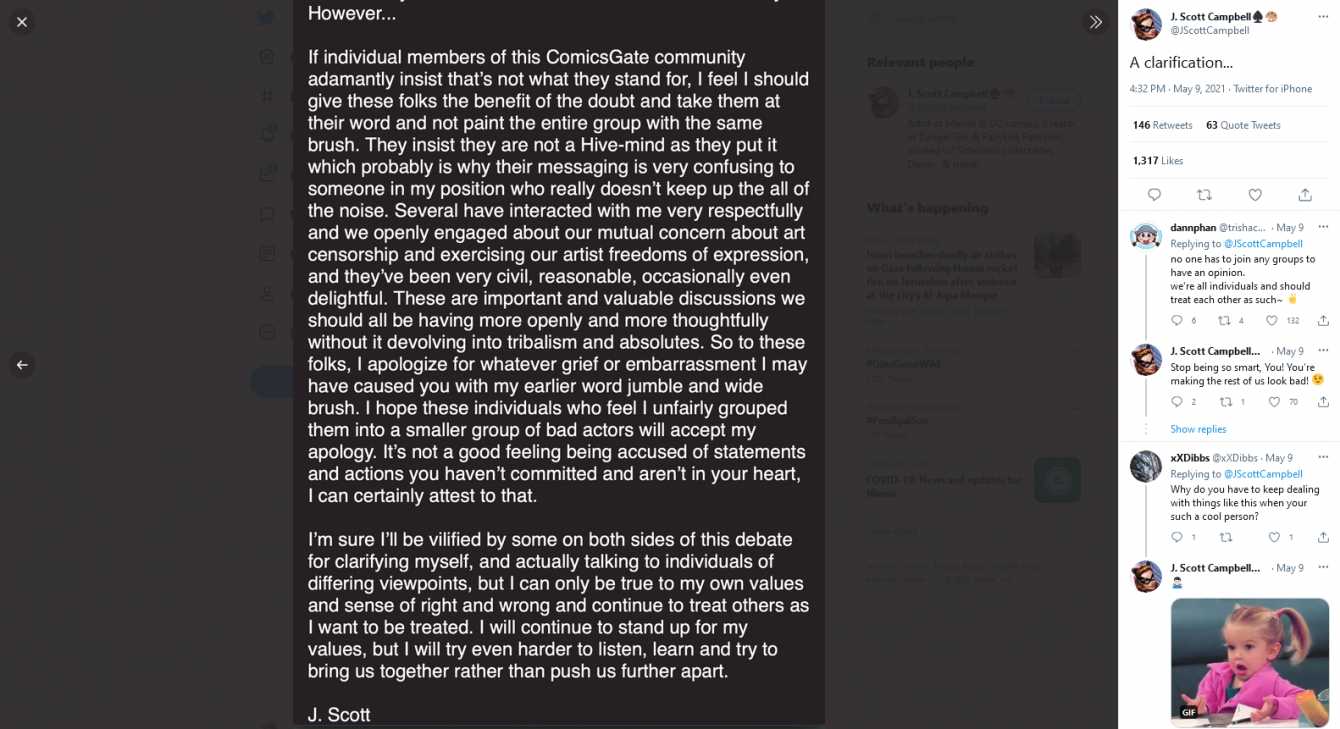 “They insist they are not a Hive-mind as they put which probably is why their messaging is very confusing to someone in my position who really doesn’t keep up with all of the noise,” clarified Campbell.

He went on to note that “several have interacted with me very respectfully and we openly engaged about our mutual concern about art censorship and exercising our artist freedoms of expression, and they’ve been very civil, reasonable, occasionally even delightful.” 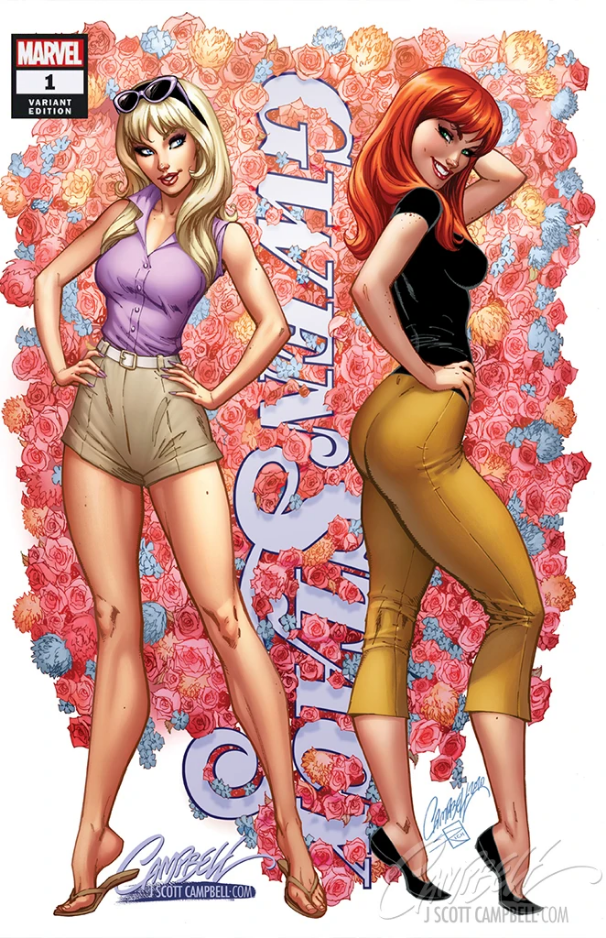 Campbell further praised these discussions with ComicsGate members by noting, “These are important and valuable discussions we should all be having more openly and more thoughtfully without it devolving into tribalism and absolutes.”

“So to these folks, I apologize for whatever grief or embarrassment I may have caused you with my earlier word jumble and wide brush,” said Campbell. “I hope these individuals who feel I unfairly grouped them into a smaller group of bad actors will accept my apology. It’s not a good feeling being accused of statements and actions you haven’t committed and aren’t in your heart, I can certainly attest to that.” 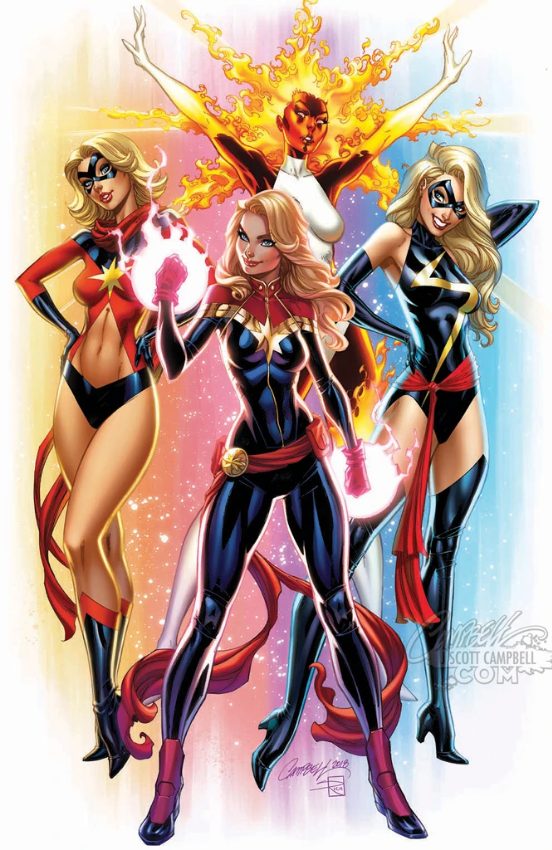 “I’m sure I’ll be vilified by some on both sides of this debate for clarifying myself, and actually talking to individuals of differing viewpoints, but I can only be true to my own values and sense of right and wrong and continue to treat others as I want to be treated,” he concluded. “I will continue to stand up for my values, but I will try even harder to listen, learn and try to bring us together rather than push us further apart.”

What do you make of Campbell’s initial denouncement of ComicsGate and his follow-up apology? Let us know your thoughts on social media or in the comments down below!