After past comments made by Kentaro Miura regarding his health sparked rumors that his sudden passing resulted from his living an unhealthy lifestyle, the mangaka’s chief assistant recently denied that the esteemed Berserk creator’s death was anything more than tragic happenstance. 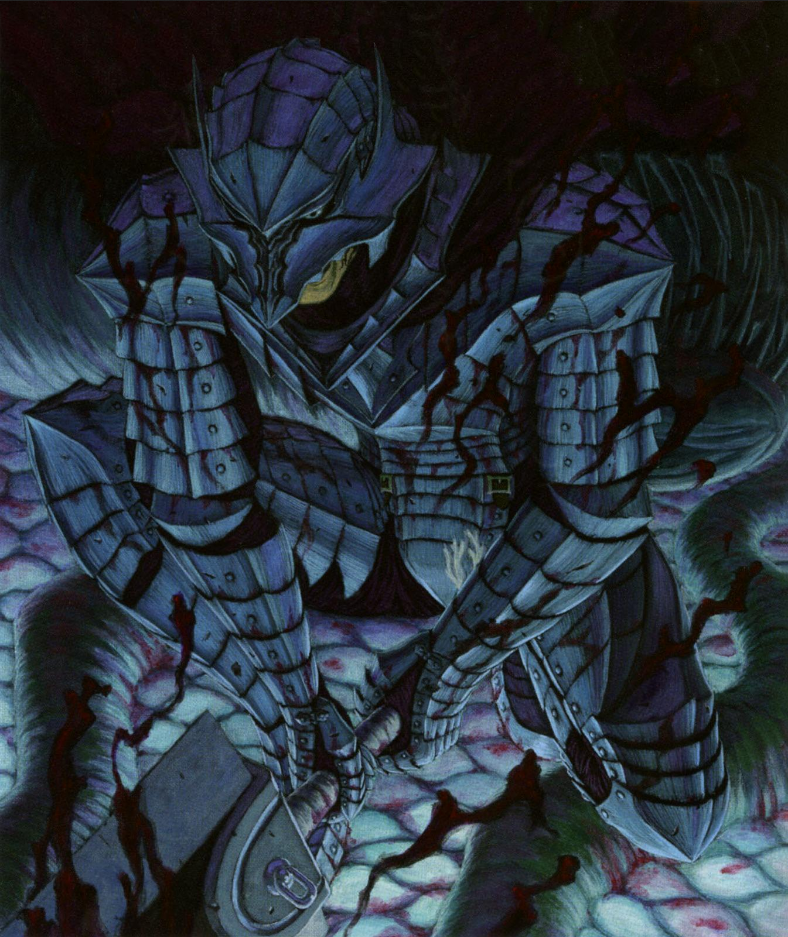 The aforementioned rumors first began to circulate across social media on May 20th after an anonymous 4chan user, likely only intending to make sense of the mangaka’s unexpected death, posted a compilation of various ‘author comments’ made by Miura to Young Animal magazine throughout his run on Berserk in which he discussed various instances of sickness, fatigue, and self-doubt.

Though Miura’s various comments concerning his mental and physical wellbeing were made only sporadically, when presented together, they appeared to paint the portrait of an artist who disregarded his own health in order to keep up with the demands of the modern manga industry.

I went to Okinawa for my first big holiday as a manga artist, and spent two and a half days out of four suffering from heatstroke. (1998, No.19)

I collapsed again from overwork. I missed Gwynn’s Hundred Great Books. Ugh! (2005, No.9) 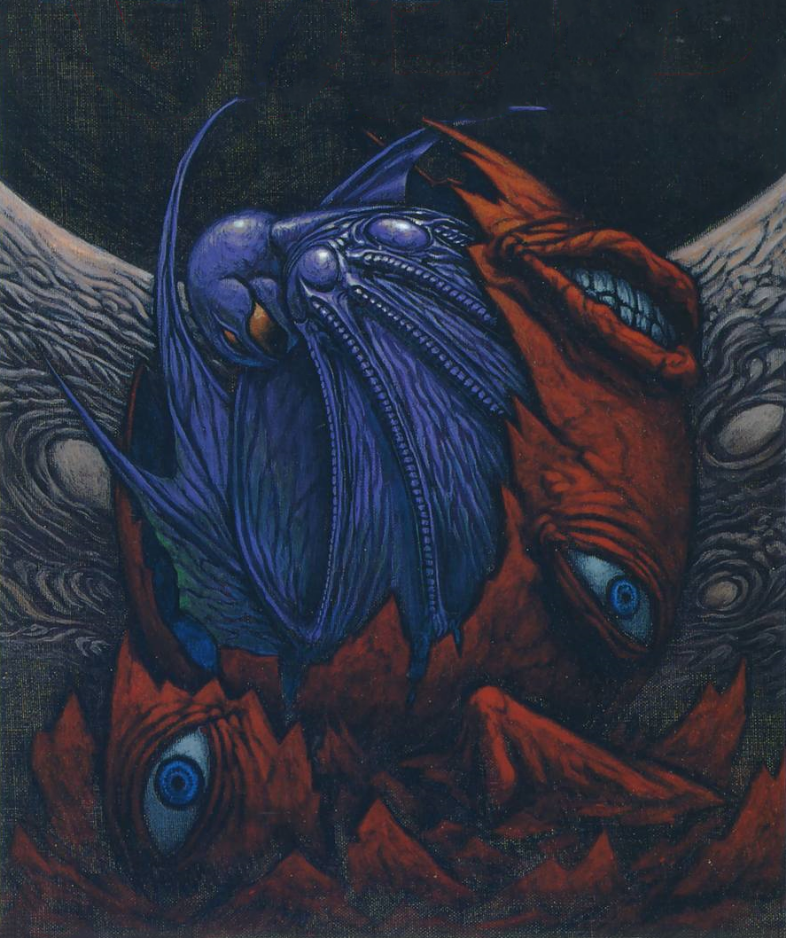 After a movie, I always go to the Loiho next to the Tokyo Metropolitan Government Building for a review meeting with friends and stay there until the first train leaves. (1996, No.1)

I bought some clothes and shoes for the New Year’s party. I only have two pairs of sneakers. (1996, No.2)

My thirties are almost over. My life is a mess, with nothing but manga. But I can’t take it back now, so I’m going to keep going!I’m going to stay indoors again this year. (2006, No.3)

Two-thirds of my body is made up of calorie mates.So does that mean that 2/3 of Berserk is provided by Otsuka Pharmaceutical? (2009, No.19) 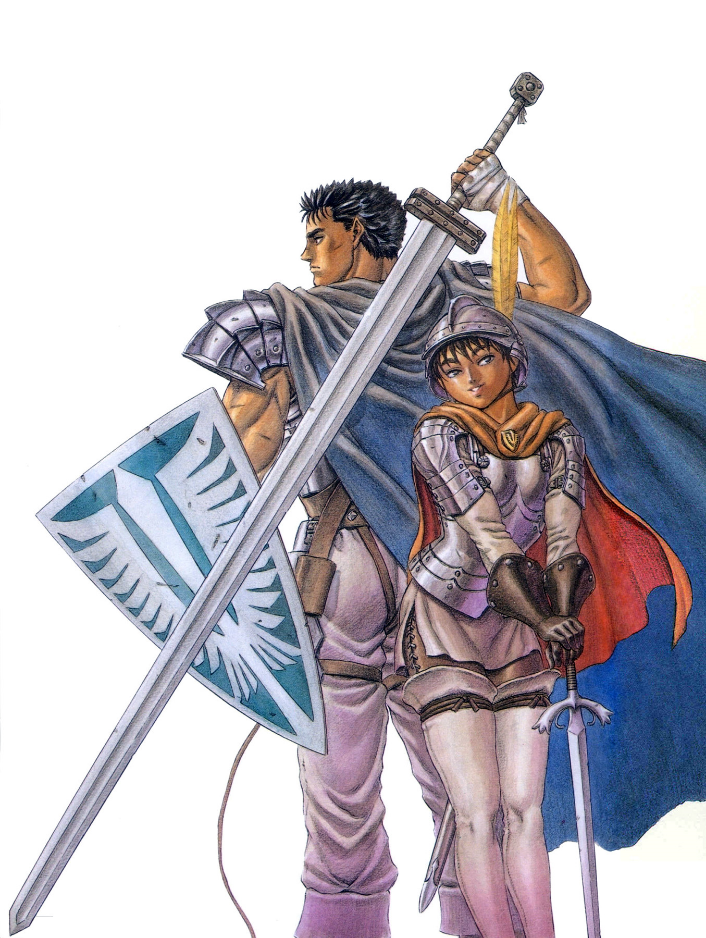 As fans grew concerned that this philosophy of overwork had contributed in some way to Miura’s death, the mangaka’s chief assistant, Kurosaki, took to Twitter on May 21st “to correct a misunderstanding for the sake of Miura-sensei’s reputation”. 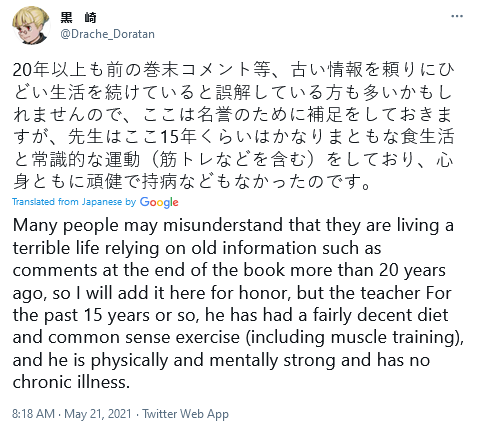 “People seem to be falsely assuming he was living a terrible life based on some end-of-the volume comments that were made over two decades ago,” said Kurosaki, according to a translation provided by manga news account @ruggia_manga. “For the past 15 years or so, Miura-sensei have been having a pretty balanced lifestyle, with good diet and regular exercise.” 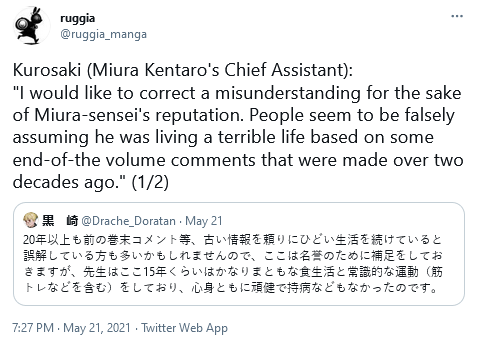 Kurosaki concluded his statement by assuring fans that Miura “was very healthy, and wasn’t sufferings from any illnesses.”

As of writing, it is unclear whether Berserk will continue in the wake of Miura’s passing. Though no official clarification on the issue has been given, a long-time assistant to Miura recently posted a cryptic tweet assuring fans that he would “do my best”.

Painful and unfair as it may be, Kurosaki’s clarification makes it apparent that Miura’s death was truly an unforeseen tragedy.

What do you make of Kurosaki’s statement on Miura’s health? Let us know your thoughts on social media or in the comments down below.