Artist Lin-Manuel Miranda, perhaps best known as the creator of the Hamilton stage musical, has issued an apology to fans after many claimed that the newly released film adaptation of his debut Broadway musical, In The Heights, failed to provide the proper amount of ‘representation’. 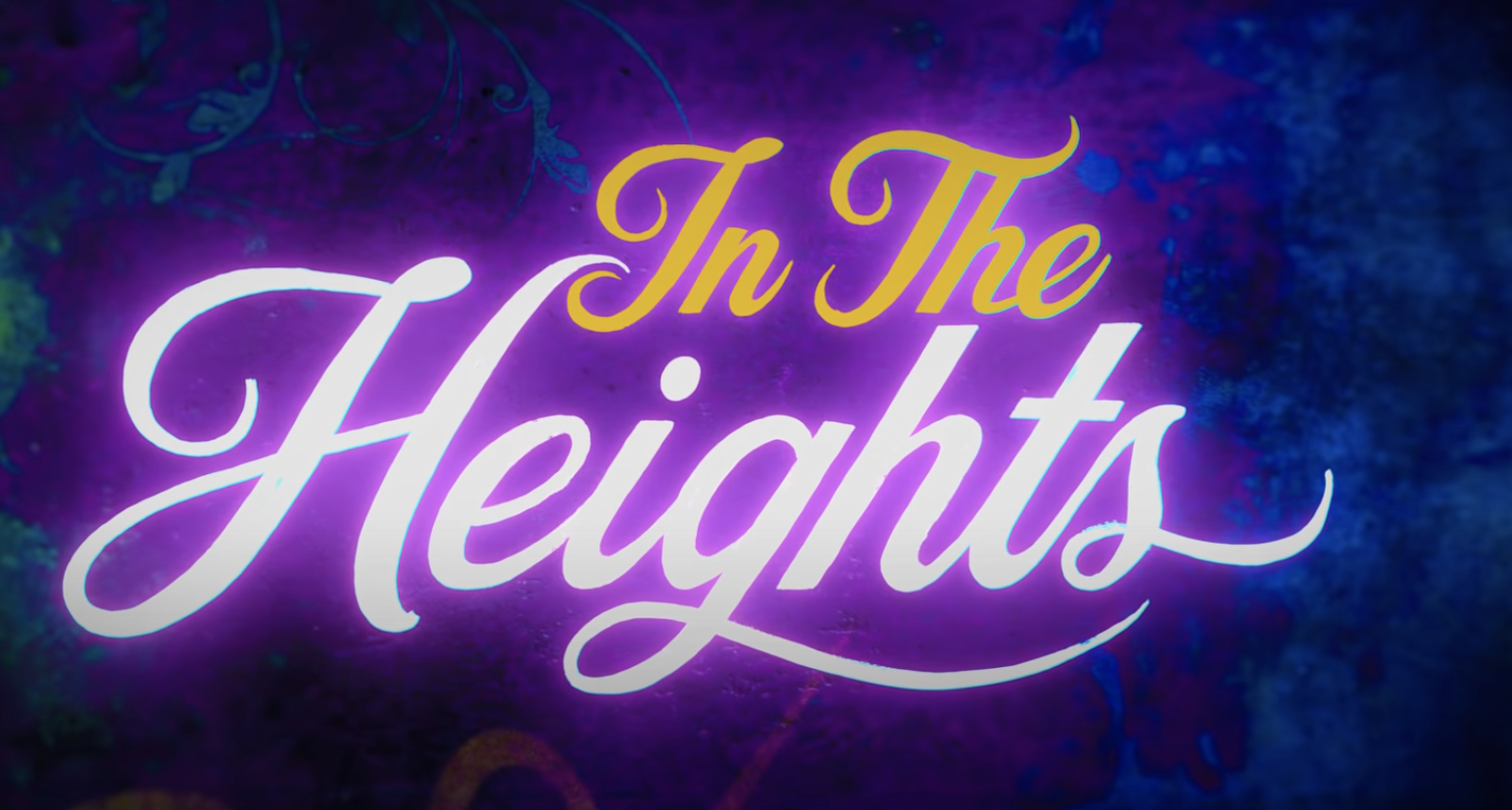 To be more precise, Miranda apologised for the lack of “Afro-Latino representation,” explaining how he feels about “dark-skinned Afro-Latino” not being represented in the recently released In The Heights film.

“I started writing In The Heights because I didn’t feel seen,” wrote Miranda on his personal Twitter account. “And over the past 20 years all I wanted was for us — ALL of us — to feel seen. I’m seeing the discussion around Afro-Latino representation in our film this weekend and it is clear that many in our dark-skinned Afro-Latino community don’t feel sufficiently represented within it, particularly among the leading roles.” 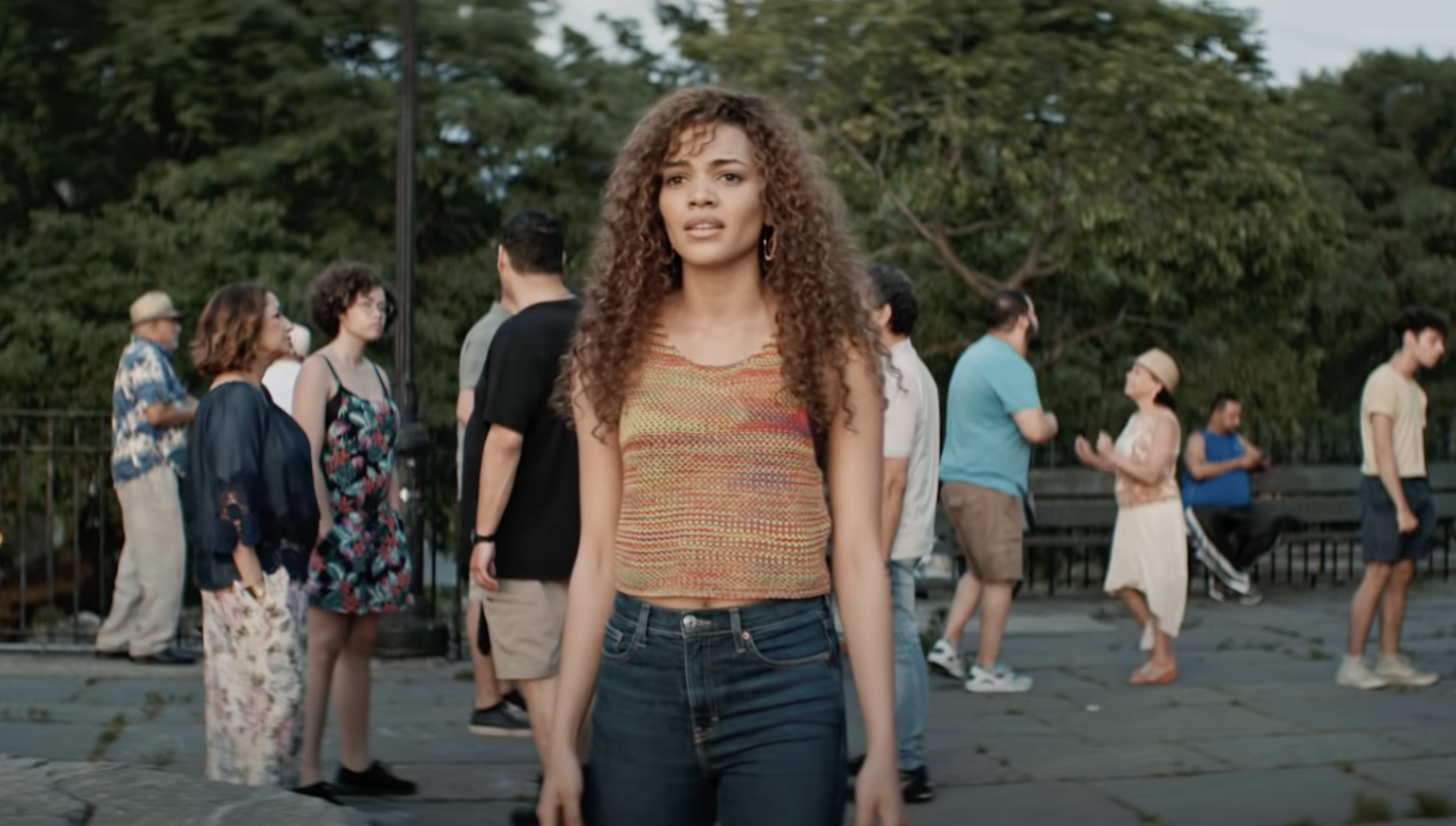 Miranda then explained that he can “hear the hurt frustration over colorism, of feeling still unseen” in the feedback he’s been getting since the musical drama film was released.

“I hear that without sufficient dark-skinned Afro-Latino representation, the work feels extractive of the community we wanted so much to represent with pride and joy,” he added. “In trying to paint a mosaic of this community, we fell short.”

“I’m truly sorry,” continued the In The Heights co-creator. “I’m learning from the feedback, I thank you for raising it and I’m listening.” 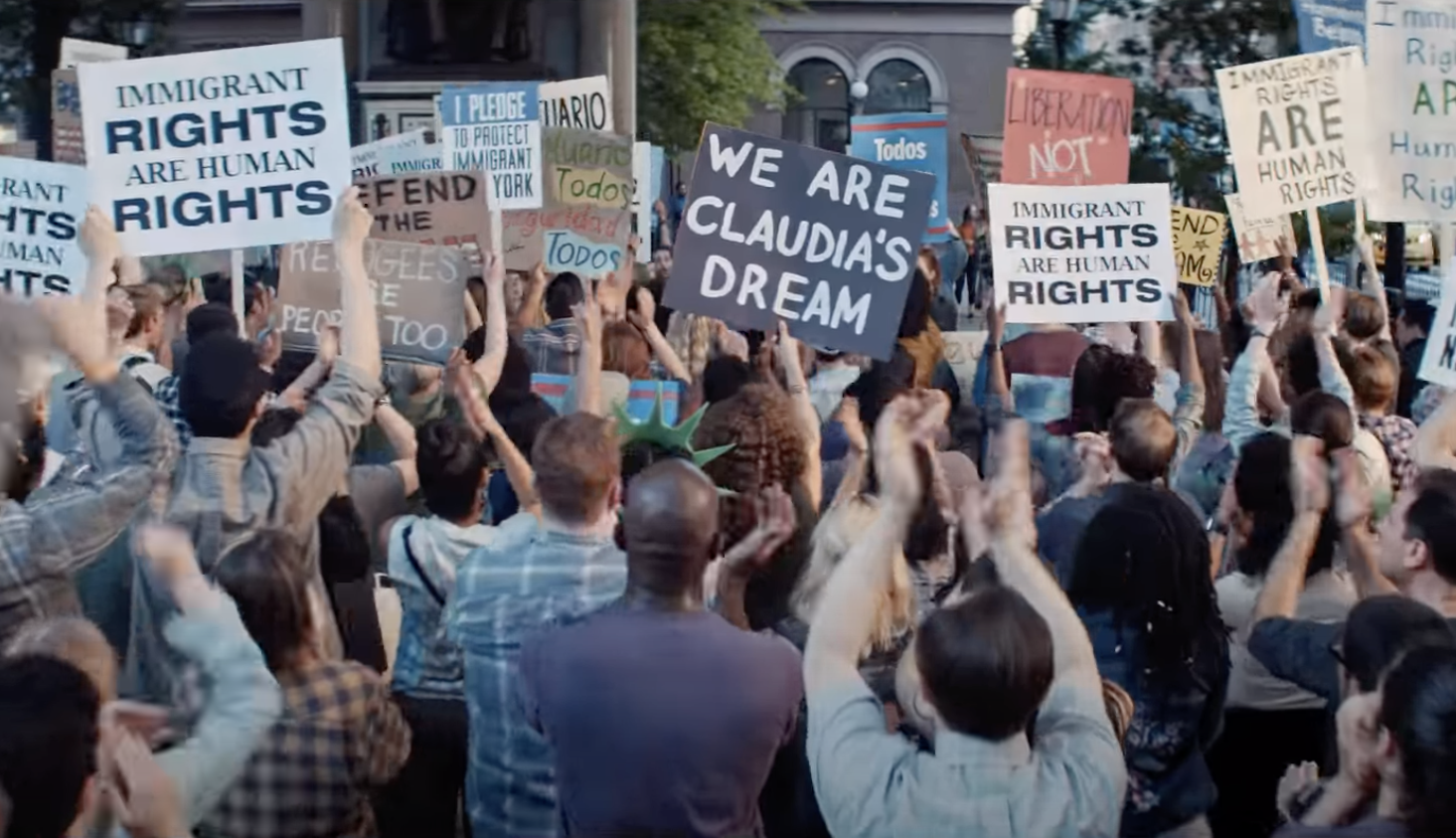 Lin-Manuel Miranda then goes on to explain that he appreciates people calling him out for the lack of representation, and holding accountable for it.

“I’m trying to hold space for both the incredible pride in the movie we made and be accountable for our shortcomings. Thanks for your honest feedback,” concluded Miranda. “I promise to do better in my future projects, and I’m dedicated to the learning and evolving we all have to do to make sure we are honoring our diverse and vibrant community”. 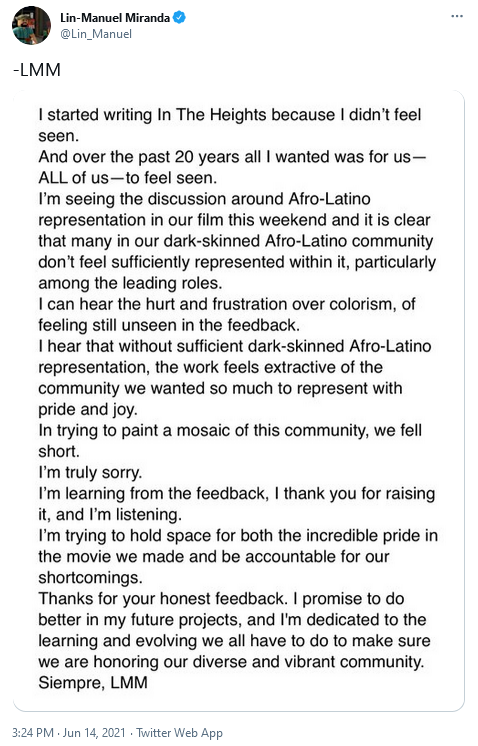 As woke as Miranda’s statement is, it didn’t stop other, even more woke Twitter users from criticising the playwright’s apology. For some, the apology was not woke enough, while others took issue with how the creator did not address the “controversy” over the musical’s lack of Afro-Latino representation before it was adapted into a film.

“I love you and your works and I think you probably have always had good intentions,” wrote Twitter user @theblackutopia. “BUT it’s not just the movie you need to address. There are those of us that has seen the OG Broadway cast, how do you explain away the lack of representation from the BEGINNING”.

Another seemingly frustrated user asked Miranda, “But didn’t you receive this same ‘feedback’ when it was a play? Why are you acting brand new? I’m confused.”

“I’m noticing that everyone commenting saying ‘no need to apologize, people are just whining’ are either A) Not Afro-Latino or B) Have never been to Washington Heights and saw the number of dark skinned people living there,” wrote user @BAMMcDonald.

Holding tightly on to that moral high ground, they then added, “We can support this film but still hold it accountable.”

“Instead of trying to yell over each other and listen why people are hurt. Just listen,” they concluded.

With yet another hot take on the matter, Twitter user @FranAndriolo wrote, “I think in addition to having a mostly white passing cast, you also missed an important conversation where Nina’s father is racist.”

The user then gave Miranda some woke guidelines to follow, explaining, “Anti-blackness in Latino culture is very prevalent and that could have been an honest portrayal as well breaking down some barriers.”

@tabitha_anne202 shared their fervent belief that “Criticism from Black Latinx is not meant to tear down or ‘cancel’ you or the film,” but rather “comes from a place of pride and responsibility to uphold the truth that 1) Black Latinx exists and are worthy of lead roles and 2) Washington Heights is hella Black.”

Noting how the film featured only “One Afro-Latino man, and one Afro-Latino woman in a leading role”, @Amara_deMachado encouraged Miranda to ‘get it right’ the next time he decides to cast Afro-Latino actors, suggesting, “Next time, if you’re stumped for Afro-Latinos to cast in a movie about Washington Heights, try Google.” 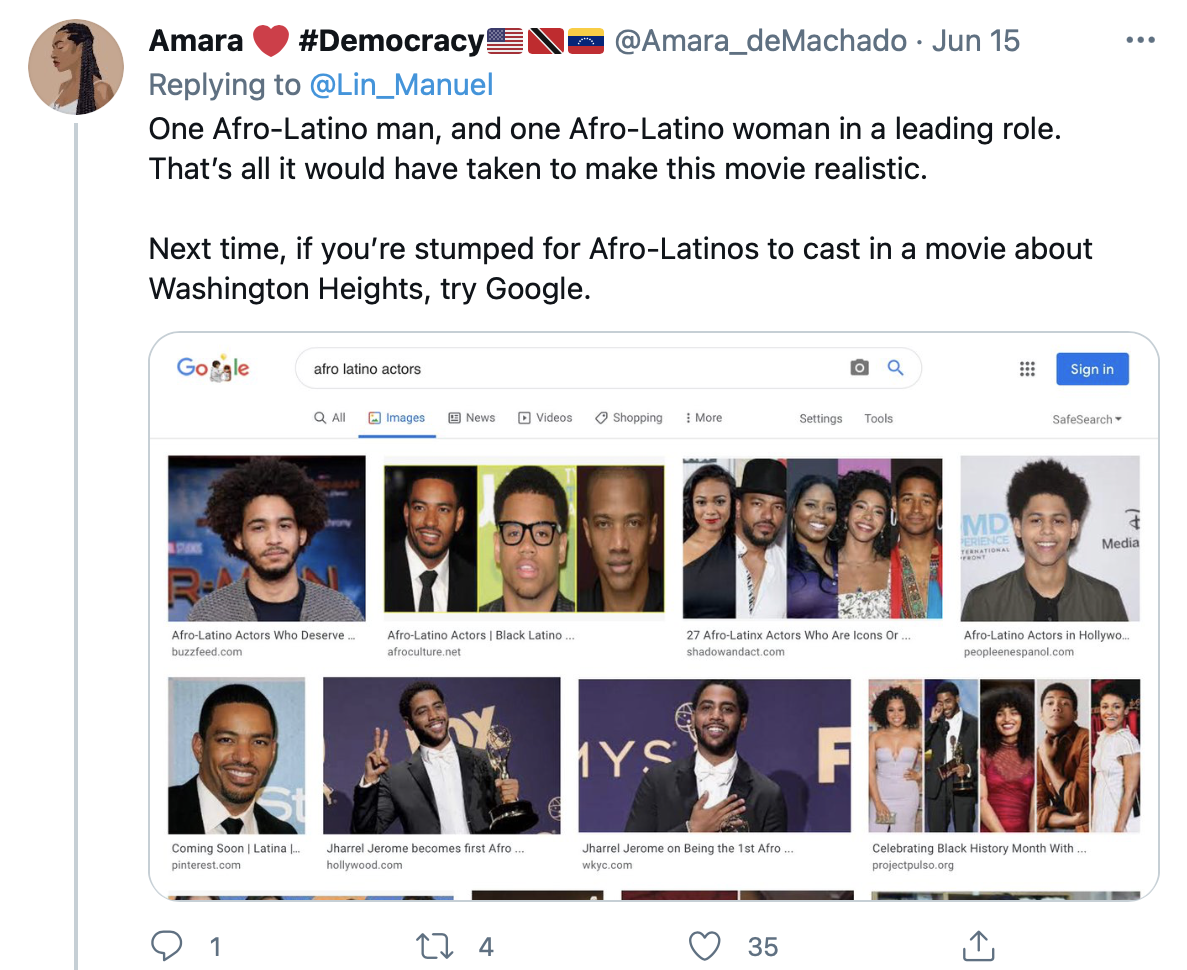 For his own sake, one can only hope that Miranda is taking notes, otherwise his future projects will fail to find an audience among the woke social justice warriors – many of whom feel the need to be represented in and and every existing form of respective media before consuming it – who make up a sizeable part of his audience.

With that said, there is no pleasing the woke cancel mob, and Miranda’s woke apology stands as only the latest piece of evidence in support of that assertion. 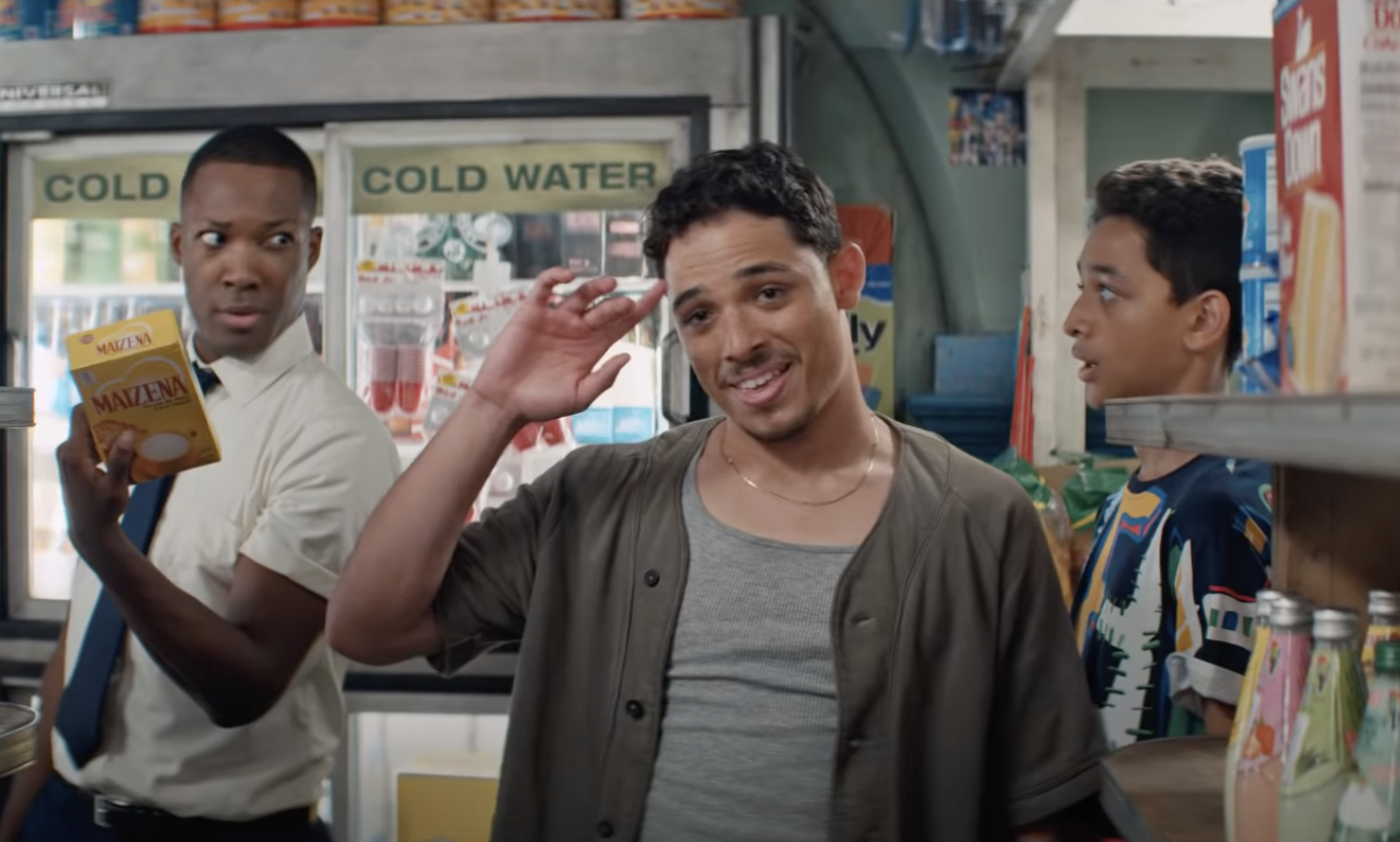 What do you make of Miranda’s apology for the lack of “dark-skinned Afro-Latino” actors in In The Heights? Let us know in the comments section down below or on social media.