English actor Eddie Marsan, known for his roles in the Hancock (2008), Ray Donovan (2013-2020), and The Professor and The Madman (2019), has become the latest celebrity to be targeted by the cancel culture mob on social media — and the reason is quite moronic. 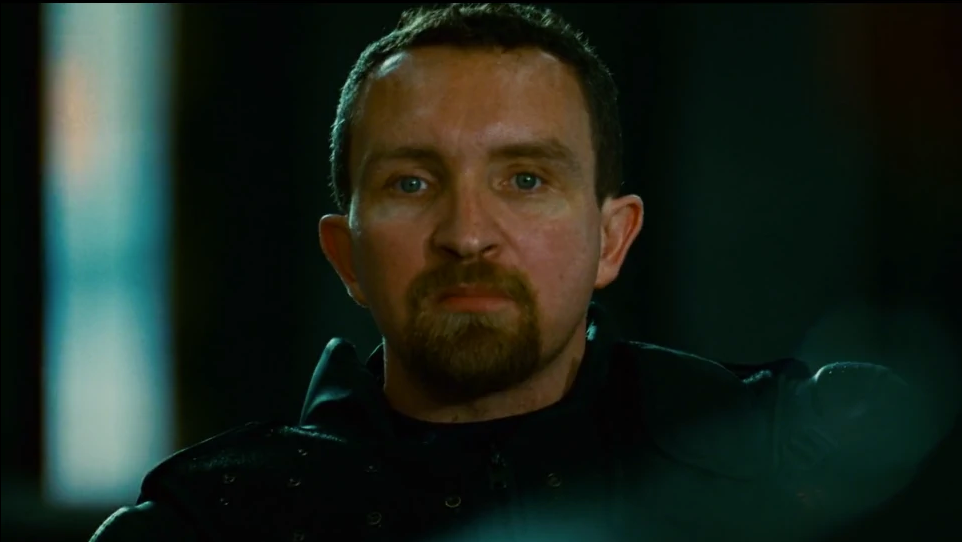 The actor was targeted by social justice warriors when he retweeted a message by Twitter user Dan Fox (@d4nf0x), who claimed that faked direct messages aimed at defaming their person had been published by the @LabTriCon Twitter account.

In support of Fox’s call on Twitter Support to suspend and remove the @LabTriCon account, the actor tweeted, “It never ceases to amaze me that the followers of a movement that claims to be benevolent at heart, who’s [sic] own leader described it as ‘nicer, gentler politics’ continually do the most atrocious things.”

“As though their political allegiance gives them the right to,” Marsan continued. “Solidarity Dan.” 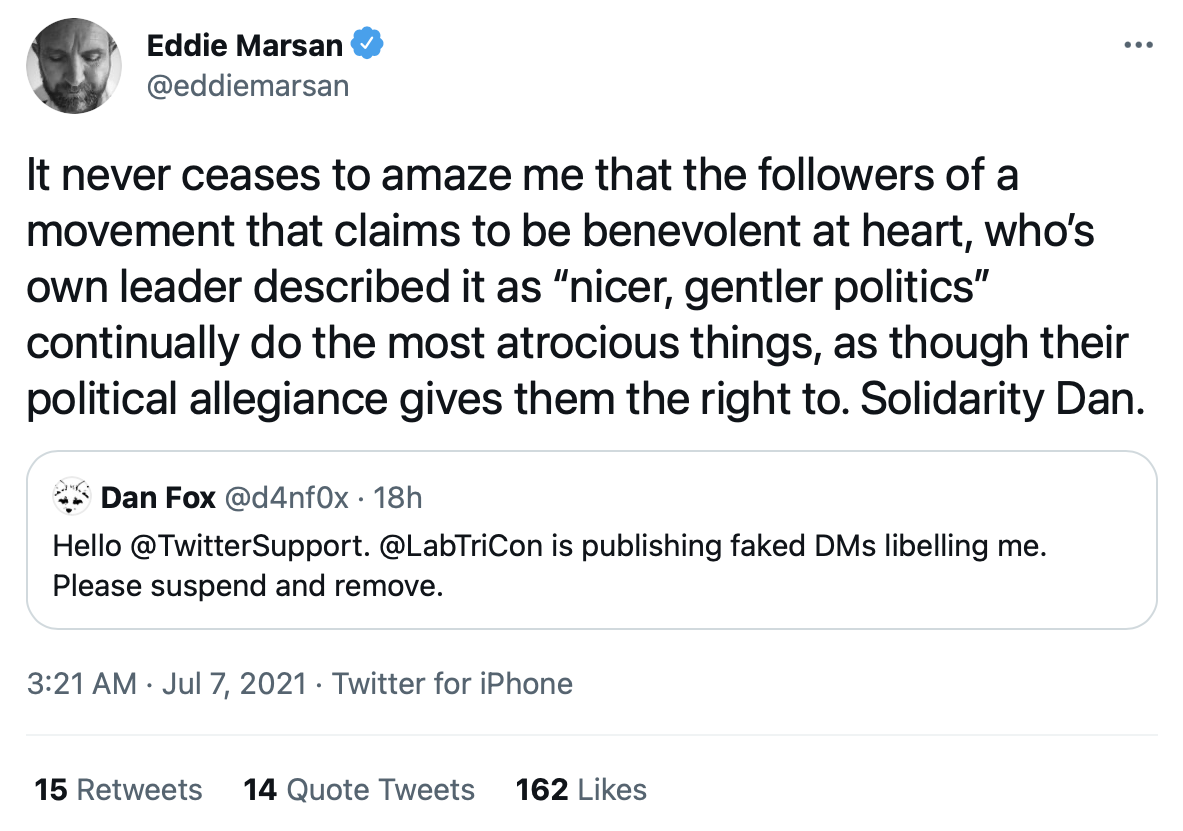 Marsan’s line referring to “nicer, gentler politics” is actually an allusion to the former Leader of the Labour Party and lifelong left-wing activist Jeremy Corbyn, who was recently suspended from the centre-left political party in October of 2020.

For those unfamiliar with English politics, the now-suspended @LabTriCon Twitter handle was used by the Labour Friends of the Trilateral Commission, which identified as “an unaffiliated grassroots members-led initiative committed to fostering nongovernmental, nonpartisan substantive political & economic dialogue worldwide.”

It is also worth mentioning that despite Marsan himself having voted Labour for over 30 years, he isn’t a fan of Corbyn in the slightest. In fact, his known distaste for the former Labour Party leader is one of the reasons why he was prompted to show support for the cancellation of the @LabTriCon “Corbynite” Twitter account. 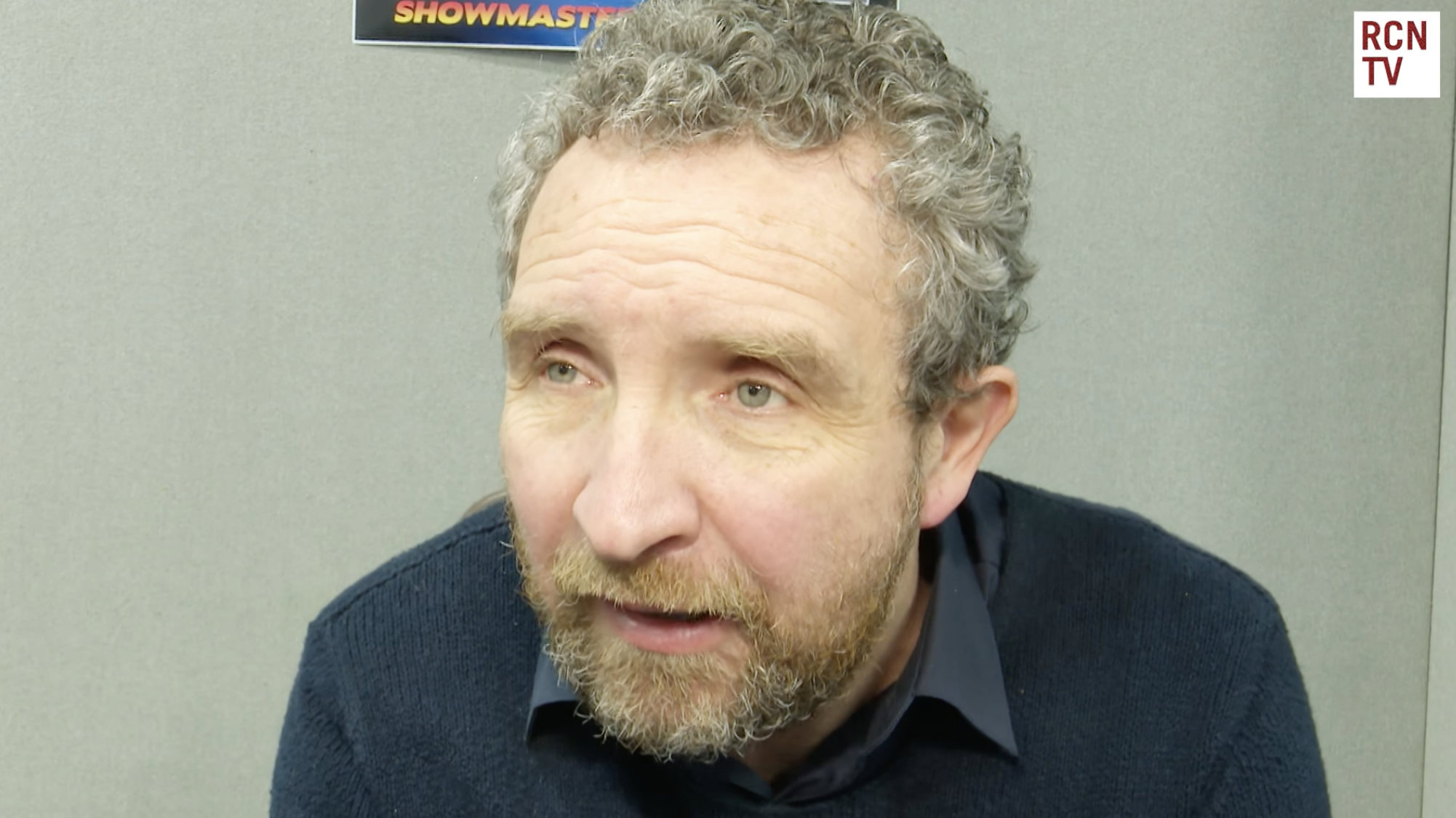 However, upon his retweet of @d4nf0x’s request for assistance, the actor was immediately targeted by social justice warriors, who some calling him out for being a hypocrite and others even going so as far as to accuse him of being an antisemite.

What’s more, the woke cancel mob has attributed Marsan’s alleged “antisemitism” to having worked alongside Hollywood actor and director Mel Gibson in Farhad Safinia’s 2016 film The Professor and The Madman, even though the actor stated that he disagrees with the political views of the renowned Australian filmmaker. 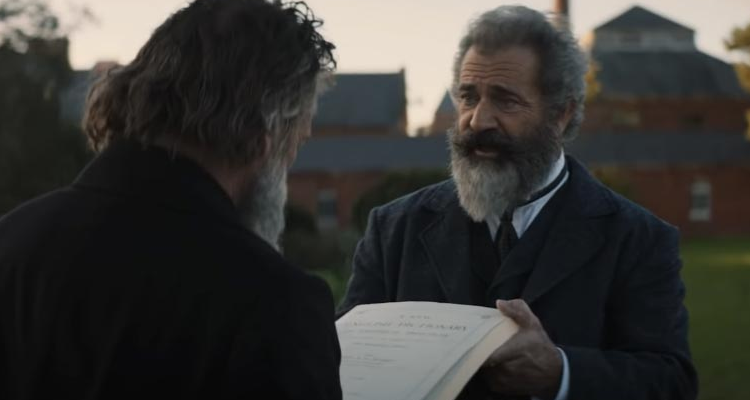 Source: The Professor and The Madman (2016), Vertical Entertainment

Attempting to cancel Marsan, Twitter user @jrc1921 asked the actor, “How’s your pal, the noted antisemite Mel Gibson, Eddie?”, to which Marsan replied, “I don’t know, I’ve not seen him since [The Professor and the Madman] finished shooting in 2016.”

“I went on to do Ray Donovan with Jon Voight who I also politically disagree with,” the actor explained. “It’s funny that, the world is full of people I disagree with and sometimes I have to interact with them. Who knew?” 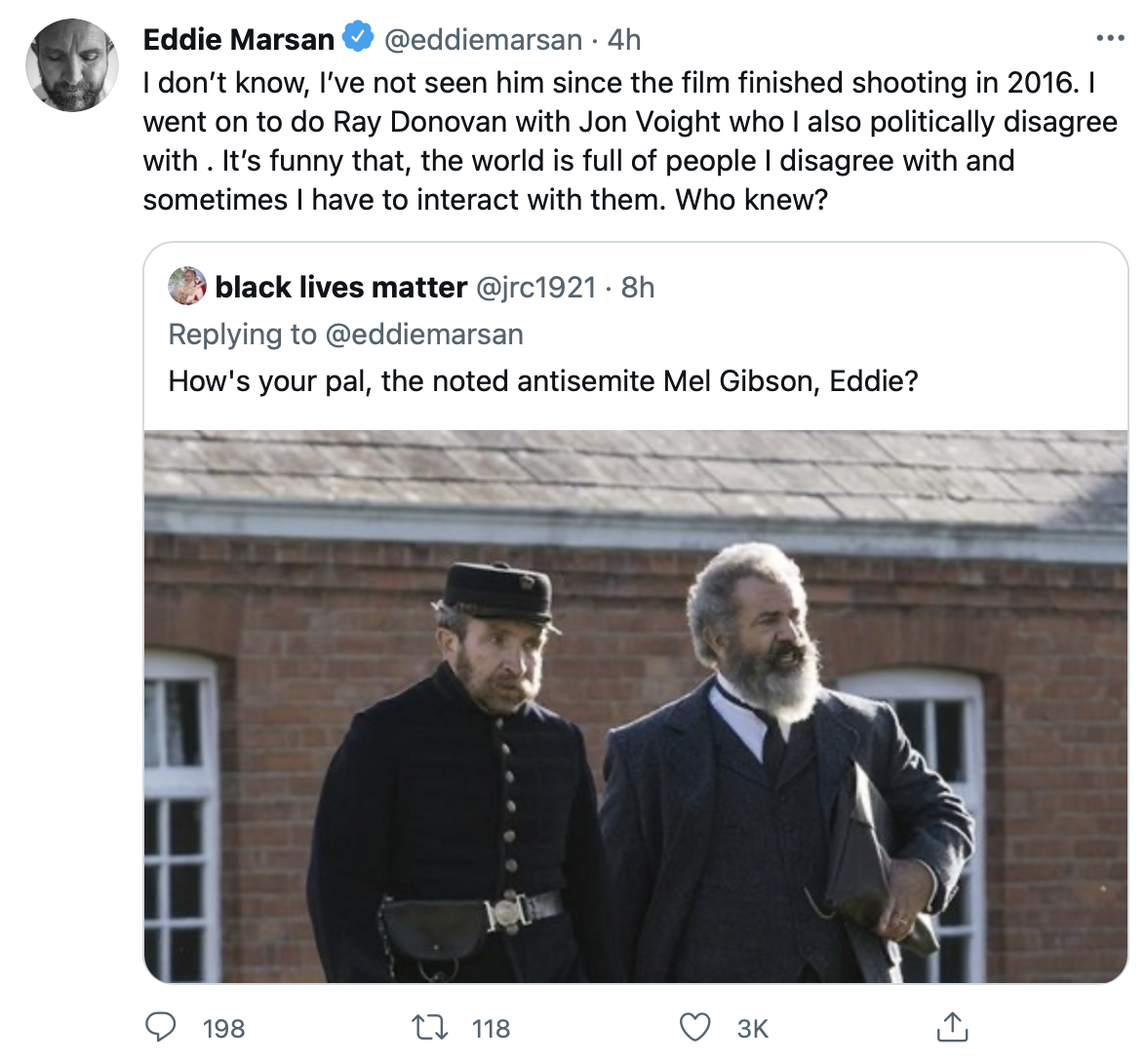 Circling back to the actor’s stance on Jeremy Corbyn, user @Ciara87C asserted, “Lol funny how when Corbyn said the same thing that didn’t quite was with Eddie. And Corbyn was never doing it for financial gain.”

Sharing a picture of Marsan and Gibson together in The Professor and The Madman, @TypingOfTheRed mocked @d4nf0x’s original request for “The Coveted Eddie Marsan Endorsement” by attemptig to conflate their appearance in a film together with an imagined endorsement by Marsan of Gibson’s own politics, to which the actor replied,  The actor replied, “That’s all you’ve got??? I’m 53 years old, I’ve done a lot worst than appear in a film with Mel Gibson.”

“It also stars Sean Penn, Stephen Dillance, Steve Coogan oh…& Laurence Fox,” Marsan added. “I didn’t cast it but my acting is pretty good, if I say so myself.” 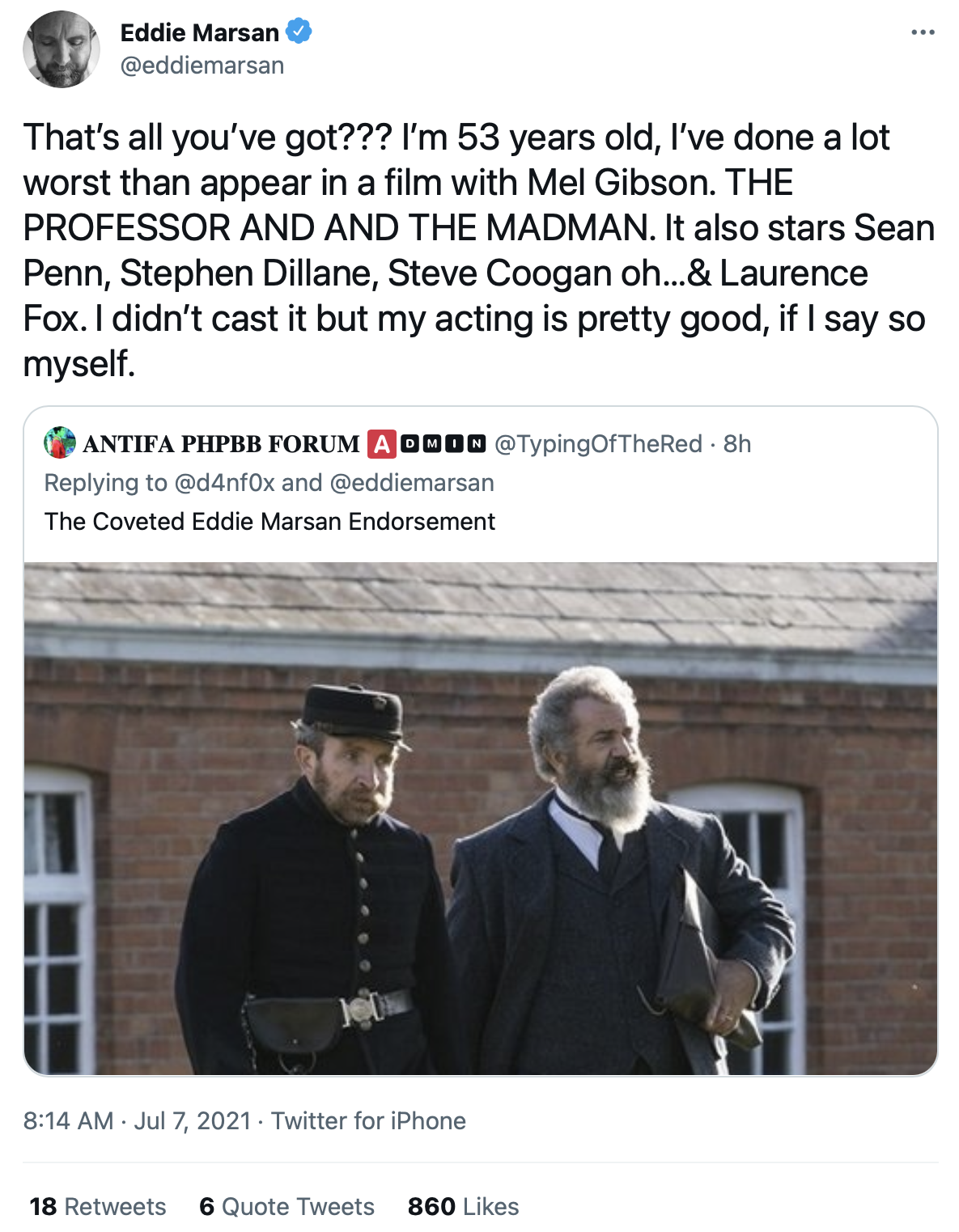 The same user then proceeded to dismiss Marsan’s reply and counter, “Eddie thinks people keep pointing out that he worked with Mel Gibson because they’re questioning his acting skills.” 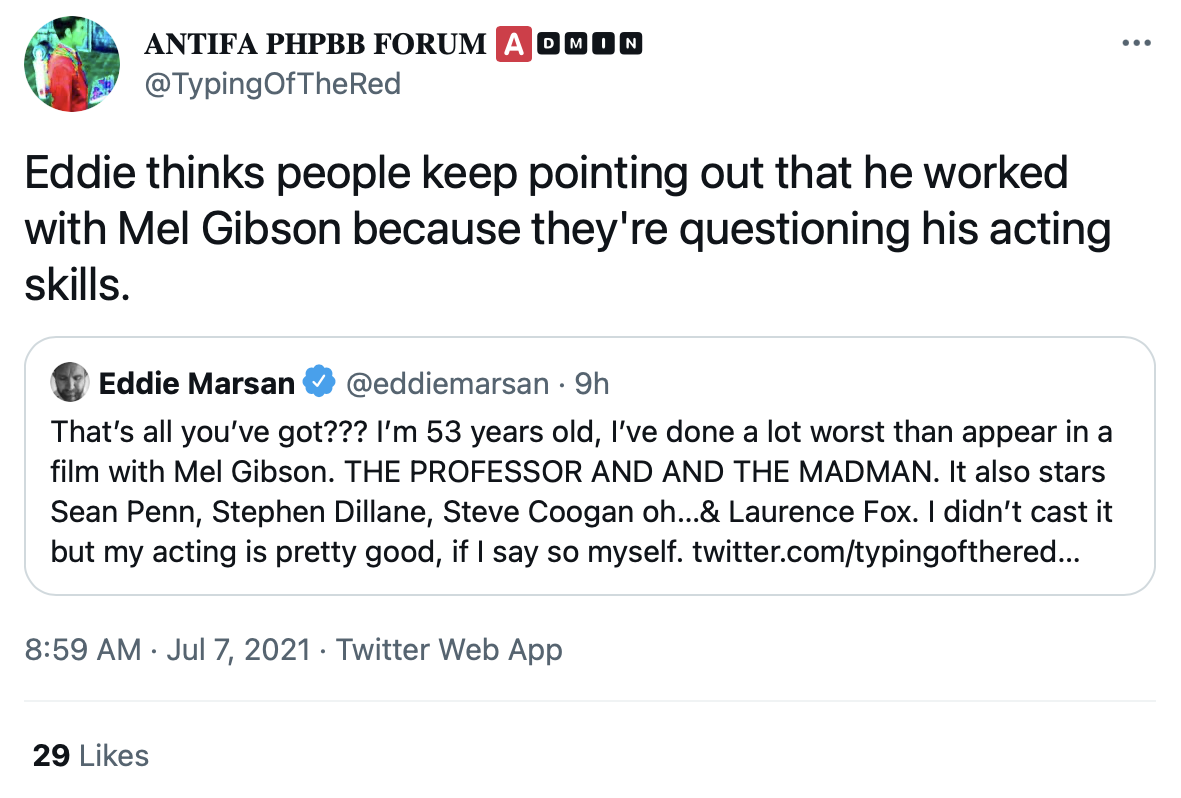 “Eddie Marsan thinks antisemitism is something you can just ‘disagree’ with someone on but s***s his pants at Corbyn and the pro Palestinian cause,” wrote fellow disgruntled Twitter user @randomsunrises. 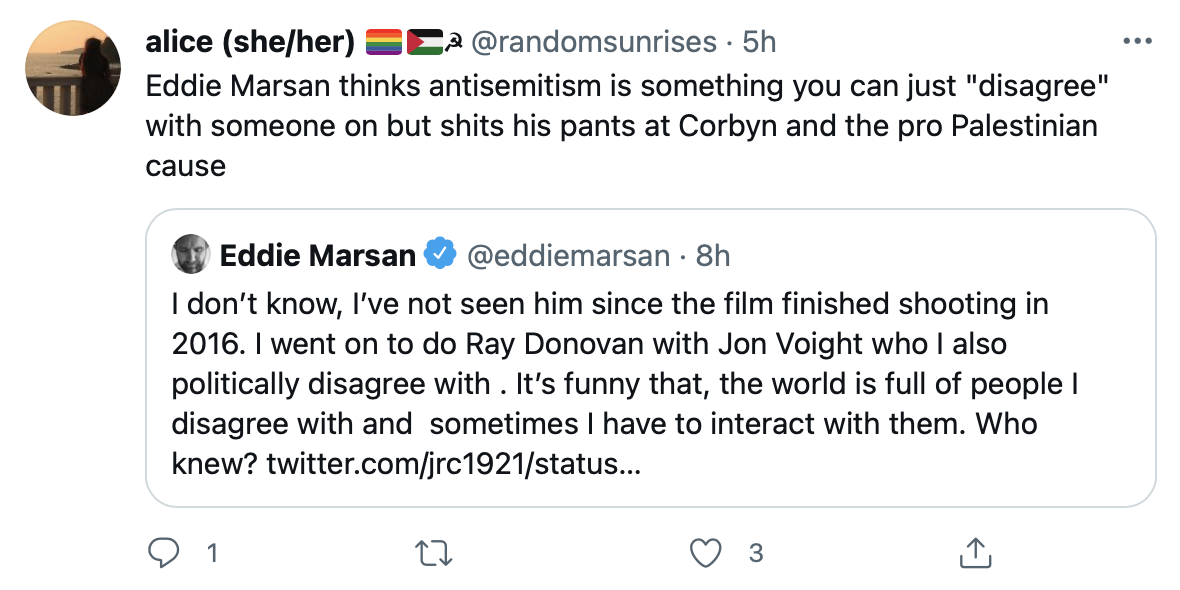 Without providing any evidence of the following accusation, Twitter user @FisunGuner accused, “You and pals, Ed, literally hounded some poor woman with a small following on Twitter because she said she didn’t like watching some actor on TV because of her views – but that was antisemitic apparently.”

They added, “She was bullied and abused by ppl with huge celeb followings. So spare me.” 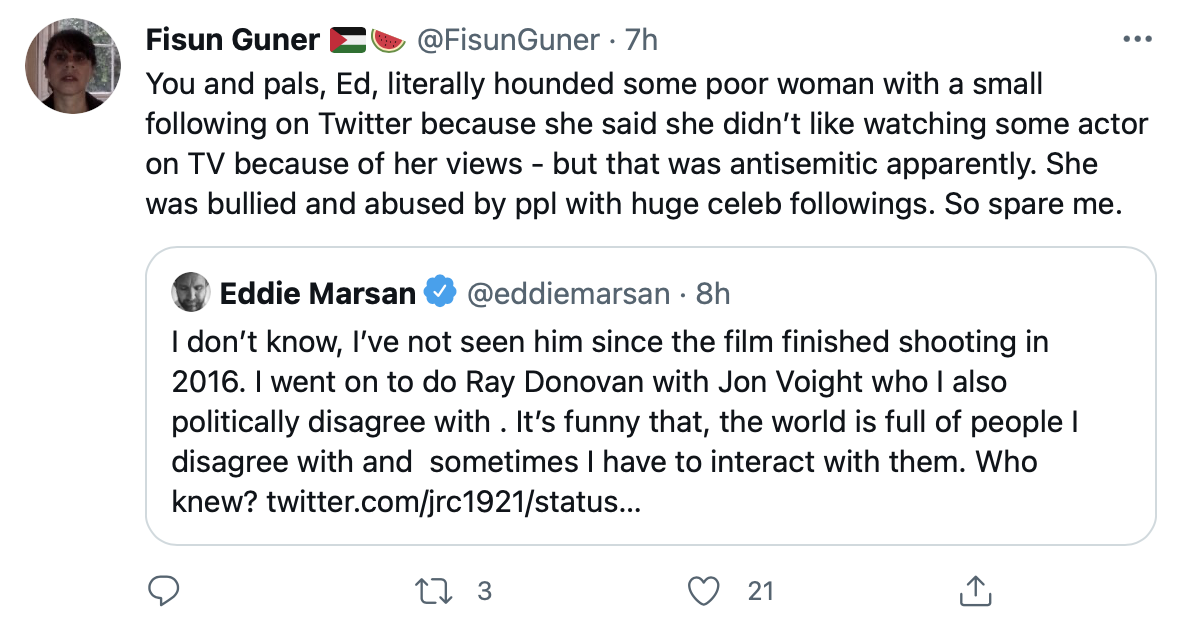 “Remember, Corbyn sharing a platform with anyone even slightly dodgy on any issue to further a good cause is considered ample evidence to declare him a racist fanatic but Eddie choosing to work with Mel Gibson for cash is fine,” said @fnord_focus. “One rule for thee, another rule for FBPE (Follow Back Pro-European Union).” 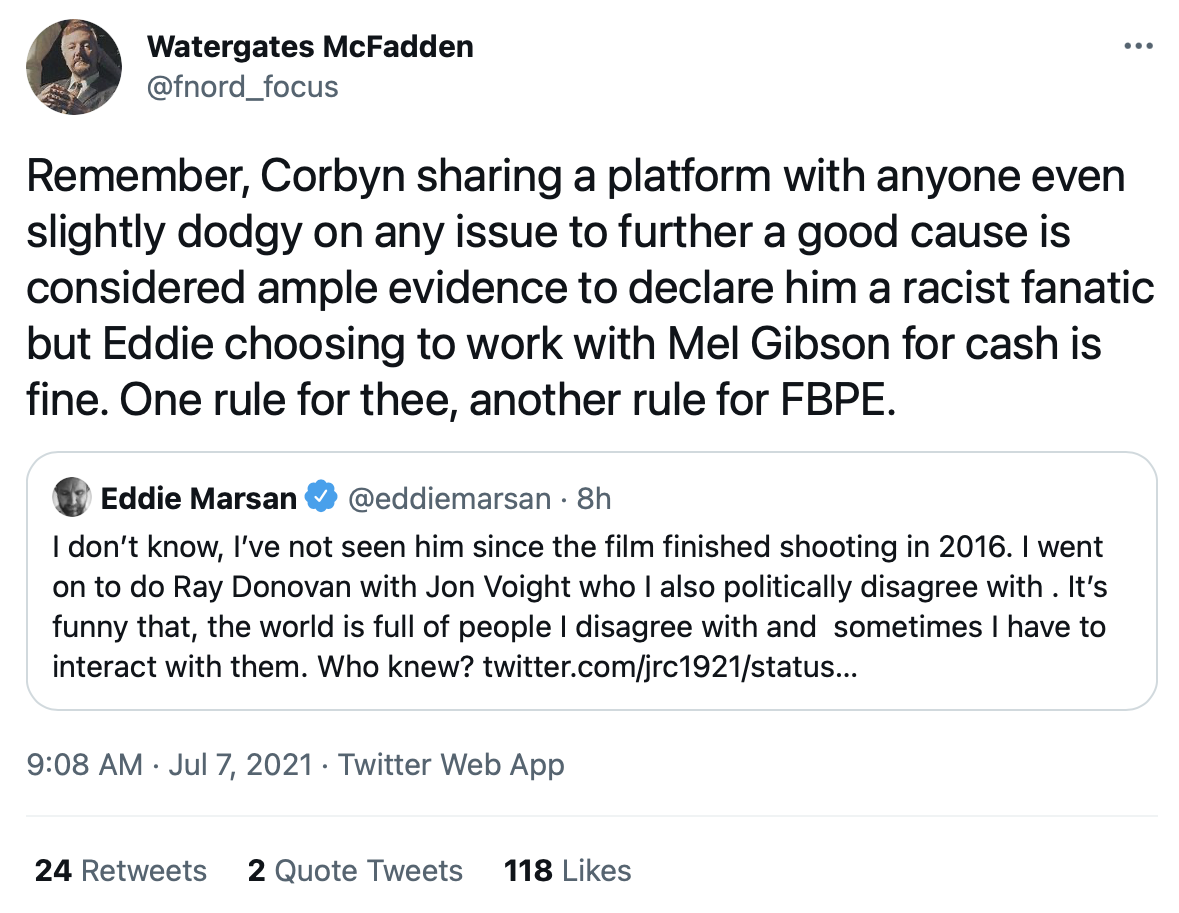 “Mel Gibson being a rabid antisemite isn’t a political difference and you know that Eddie,” wrote Twitter user @RespectIsVital.

An interesting take was provided by @BareLeft, who claimed, “Eddie is too cowardly to admit his own standards don’t apply to himself, only people he can smear and slander from his lofty position as B-list establishment t***.” 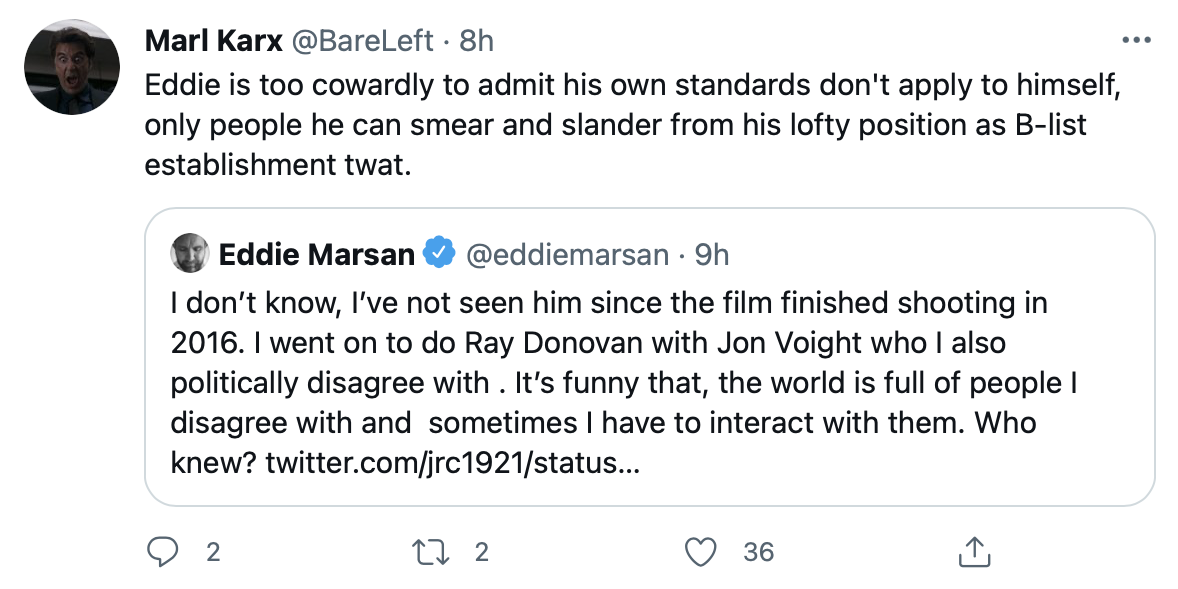 “Corbyn was the compromise. Corbyn is gone now. You got what you wanted. Aren’t you happy?” asked @Tom_Scribbler, alluding to Jeremy Corbyn’s aformentioned suspension from the Labour Party whilst also calling the actor out for supporting “anti-Corbyn”propaganda.

“No one has claimed those things, no one claims Corbyn as their leader, only liberals think in such cult type ways,” added @bobby_qeld. “The rest of us just do whatever, you Friend of Mel Gibson.”

“Eddie working alongside a man who used the phase ‘oven dodgers’ is a political disagreement in his valiant stand against antisemitism,” opined Twitter user @allforthanookie, alluding to Stranger Things actress Winona Ryder’s 2010 claim that Gibson had called her an “oven dodger” over a decade earlier.

At the time, Gibson’s representatives issued a statement to ET online asserting, “This is 100 percent untrue. [Ryder] lied about it over a decade ago, when she talked to the press, and she’s lying about it now. Also, she lied about him trying to apologize to her back then. He did reach out to her, many years ago, to confront her about her lies and she refused to address it with him.”

Referencing the same event, @TheKafkaDude wrote, “Jeremy Corbyn is an antisemite for laying a wreath for civilians in a large cemetery where other bad people were maybe buried, but getting paid to work with a man who famously asked Winona Ryder if she was an ‘oven dodger’ is just passively doing a free speech or whatever.” 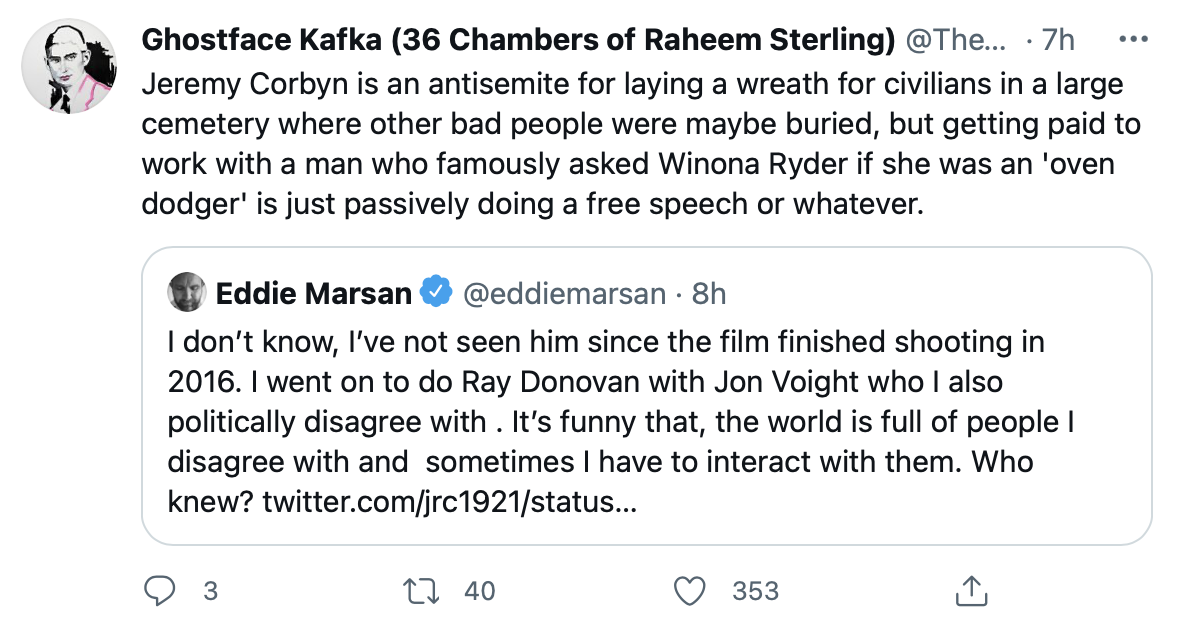 @JudeCosgrove asked “Almost as bad as inventing fictional conversations with cab drivers to smear people as racist, eh Eddie?”, alluding to an incident for which he provided no evidence whatsoever.

“We asked for a kindler, gentler life and your class spat that back in our faces, called us extremists and antisemites, and locked us into a path towards fascism and climate collapse,” read a tweet by @CallumMair. “All because you might not get to be in charge for once and have to pay a bit more in taxes.”

Social justice warriors hardly ever put in the work to fact-check when they’ve already made up their minds about whatever topic, so it’s hardly a surprise that they’re unaware of the fact that Marsan has condemned anti-semitism in the past. In fact, earlier this year, the actor shared his opinion on the Israel-Palestine conflict, which despite being immediately deemed as anti-semitic in nature, was in reality more neutral than anything.

“Look at my timeline to see why there is a problem with anti semitism in the fat left,” the actor wrote in May. “I ask equity, at the same time as calling for sanctions against Israel , to make a statement showing solidarity to Jewish  members by condemning the  rise in antisemitism, & they go ballistic.”

“Why?” continued Marsan. “Have the debate about Israel/Palestine & explore all options, if you can, listen to the other side, that way we’ll all learn something and better understand the situation but, whatever your views on the conflict don’t attack British Jews, & support them when they’re abused.” 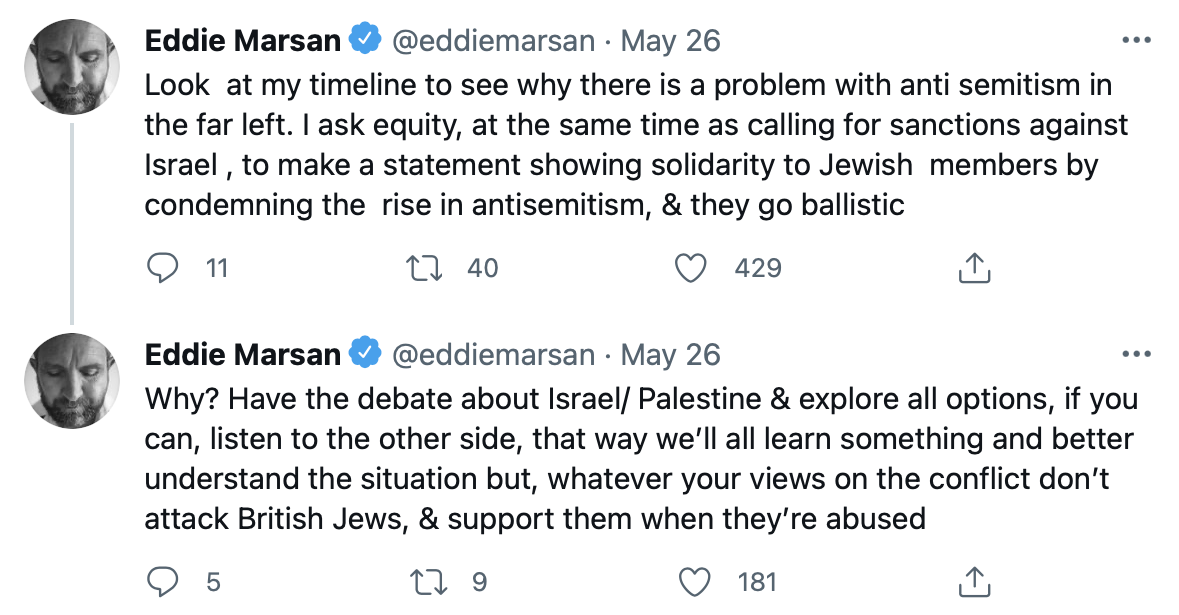 Similarly, Gibson has also been accused of being an anti-semite based primarily on his infamous 2006 DUI arrest, where upon being arrested by the Los Angeles County Sheriff’s Office the actor went on a drunken tirade against his arresting officer which ended with the dialogue, “F—ing Jews… the Jews are responsible for all the wars in the world. Are you a Jew?”

Despite the Australian director having previously apologised for this incident stated and declaring that this rant was a moment of drunken anger rather than a representation of his actual beliefs, the cancel culture mob refuses to believe his words, even in the face of his own public displays of support for Jewish individuals.

For example, just after the recent passing of Lethal Weapon (1987) director Richard Donner, himself of Jewish descent, Gibson issued a heartfelt message thanking and praising his now-late friend and mentor. 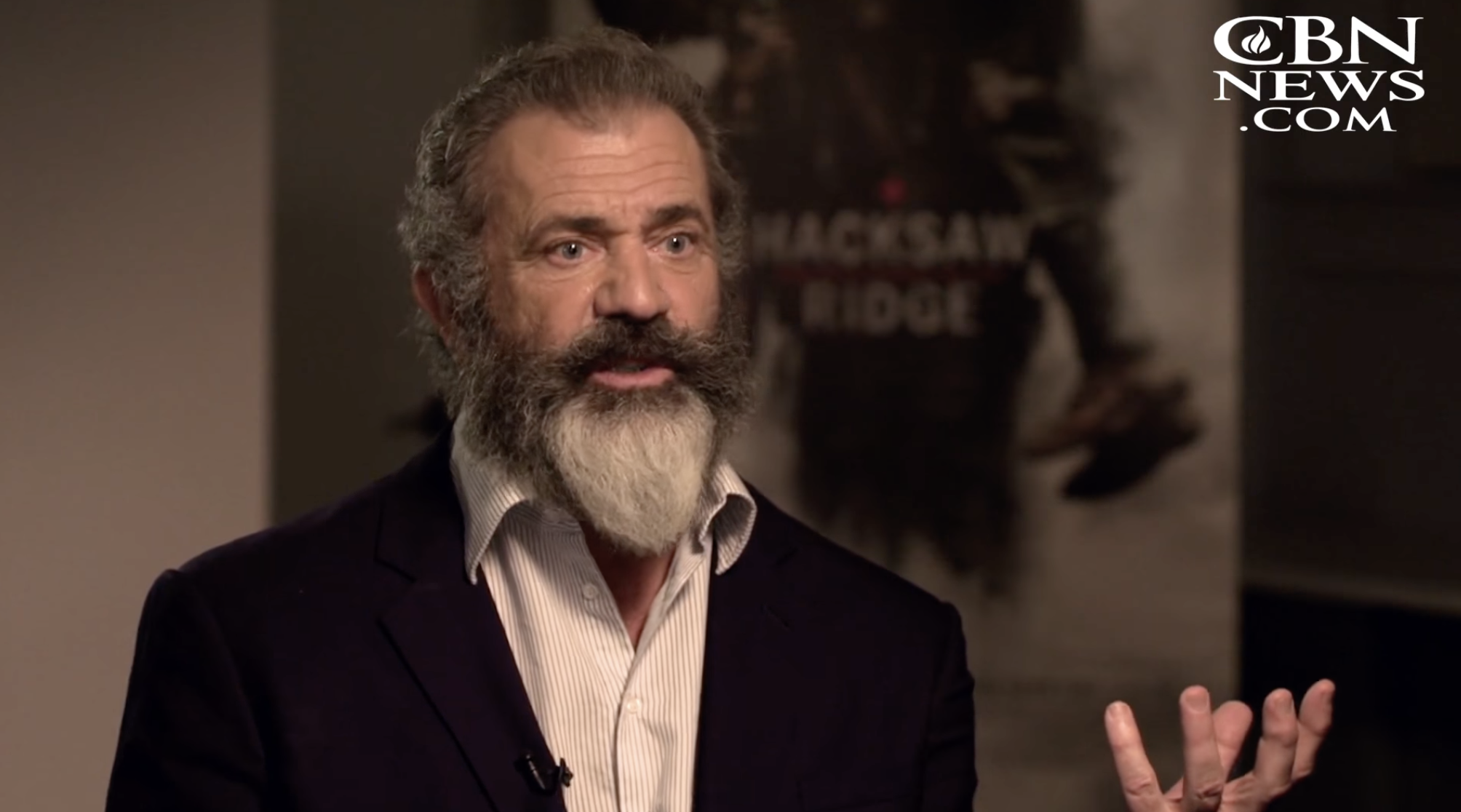 “Donner! My friend, my mentor. Oh, the things I learned from him! He undercut his own talent and greatness with a huge chunk of humility referring to himself as ‘merely a traffic cop,’” Gibson told Variety on July 5th. “He left his ego at the door and required that of others. He was magnanimous of heart and soul, which he liberally gave to all who knew him. If we piled up all the good deeds he did, it would stretch to some uncharted place in the firmament.”

“I will sorely miss him, with all his mischievous wit and wisdom,” the actor’s message concluded. 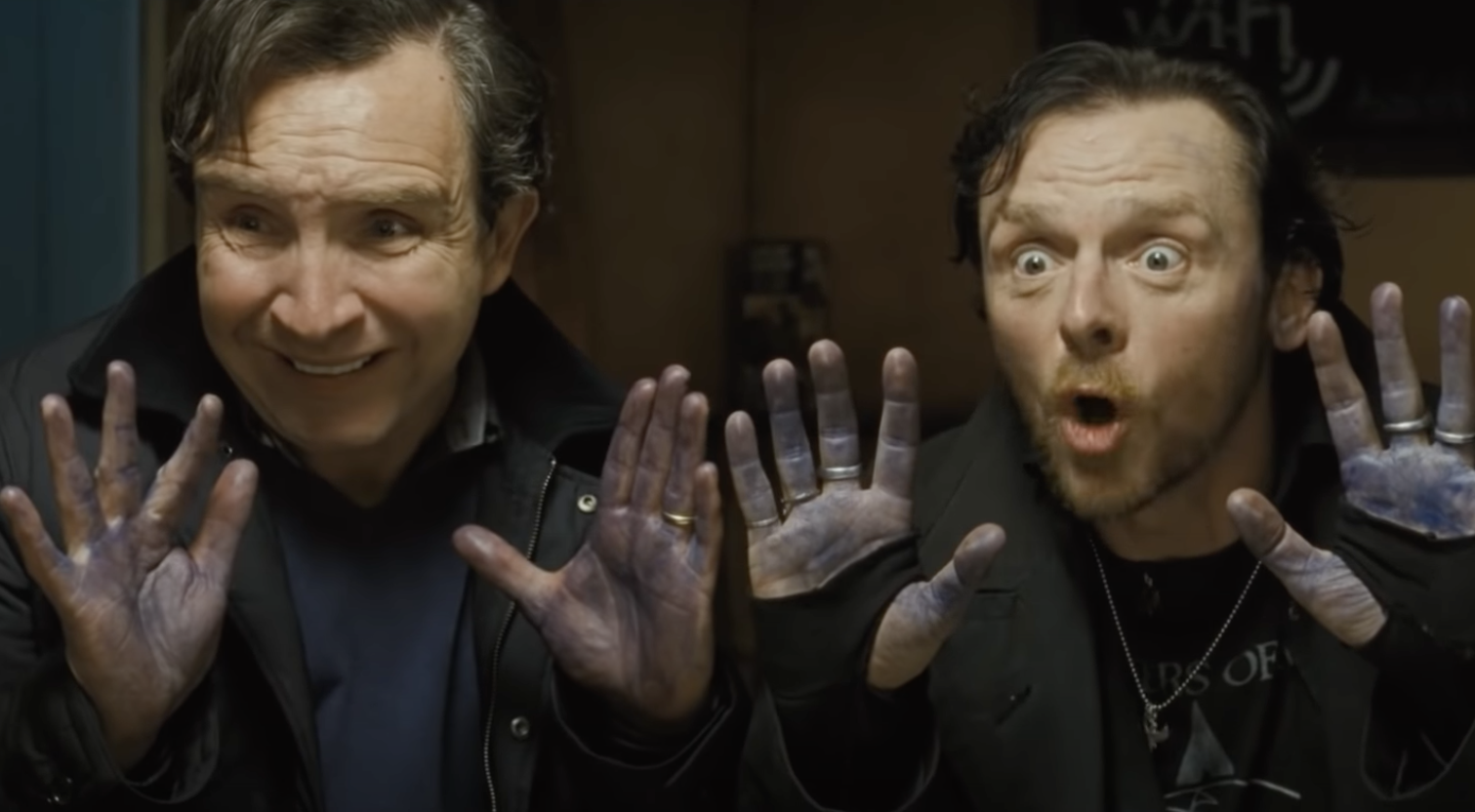 What do you make of the attempt to cancel Marsan simply for having starred in a movie alongside Gibson? Be sure to let us know all about it on social media or in the comments section down below!