An awkward translation of one-line of dialogue in Viz Media’s English-language release of the latest My Hero Academia manga chapter, which presents a more romantic interpretation of a word that primarily confers an idea of platonic respect, has left a number of fans with the false impression that Minoru Mineta is bisexual. 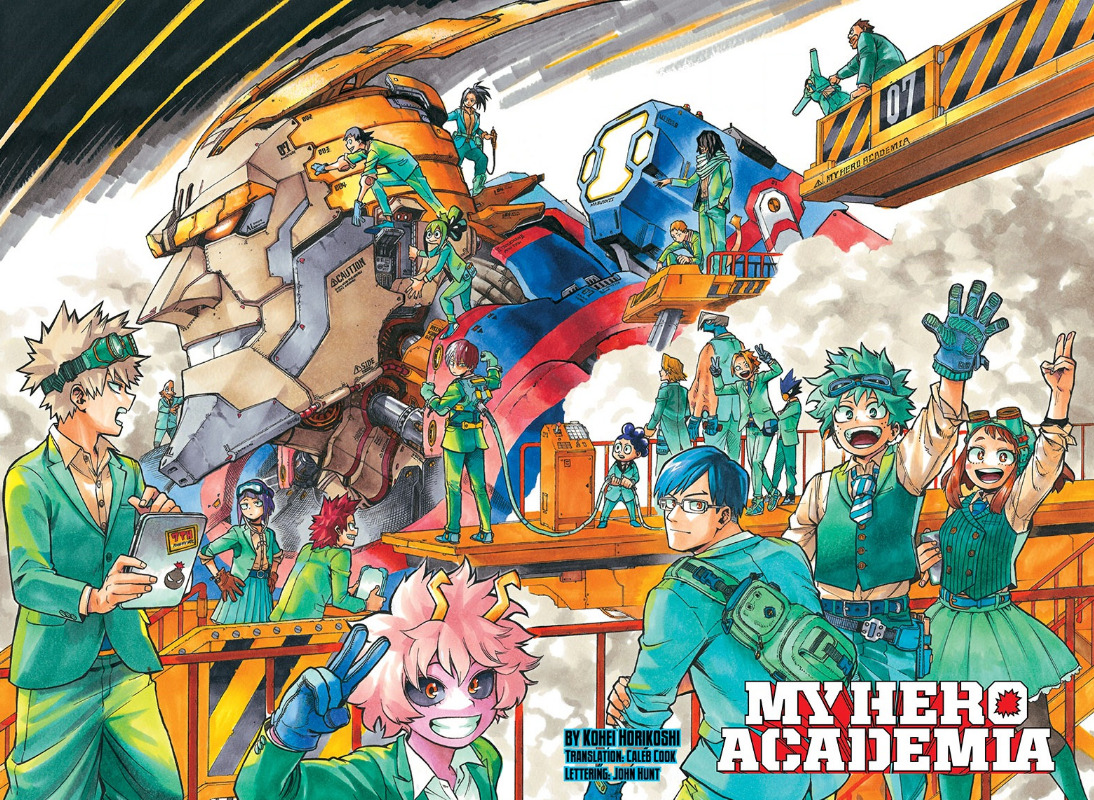 Source: My Hero Academia Chapter 321 “From Class A to One For All” (2021), Shueisha. Color spread by Koei Horikoshi.

The confusing line of dialogue can be found in the opening pages of My Hero Academia’s 321st chapter, From Class A to One For All, as Deku’s friends continue their efforts to stop the green-haired hero from going alone on his rage-fueled rampage towards All For One and, in the process, possibly playing into the villain’s plans. 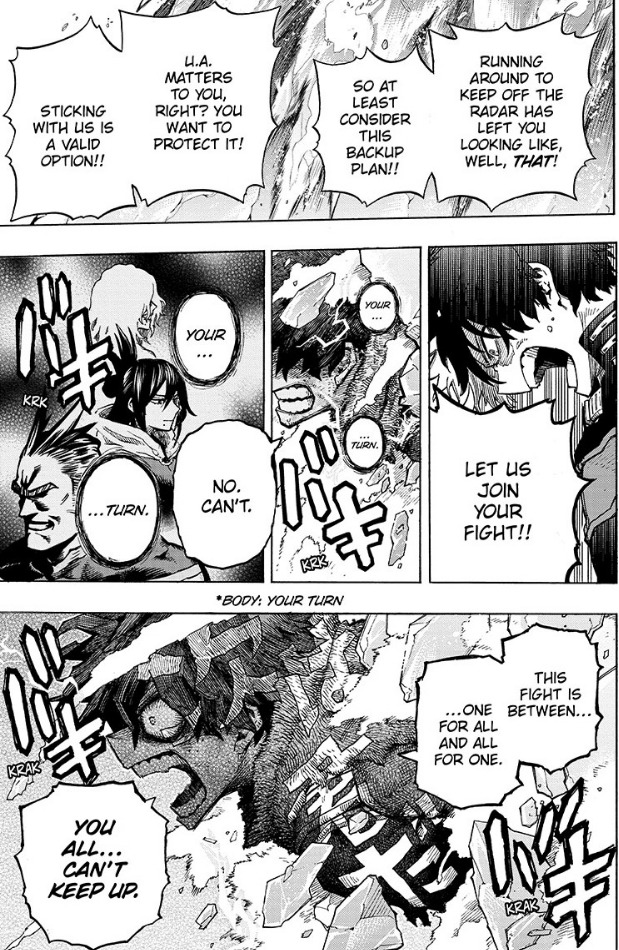 Deku soon escapes from the ice prison formed around him by Todoroki in the last chapter, leading Class 1-A to continue in their relentless attempts to stop their teammate, starting with a fake-out combo from Tsuyu and Mineta in which the former uses her amphibian-tongue to get the latter closer to their friend. 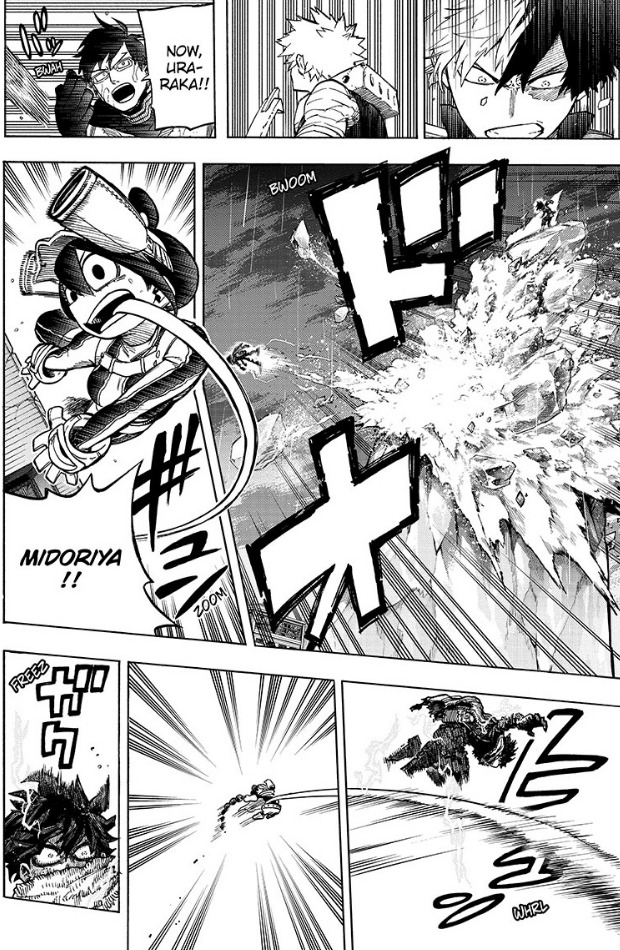 Once in range, Mineta unleashes a new super move, Mineta Beads: Ten Folds, and latches a chain of his signature ‘beads’ around his friend, hoping to use their stickiness to stop Deku’s forward progress.

Finding that his physical abilities alone aren’t enough to hinder Deku, Mineta makes an emotional appeal to his friend, telling him, “I never thought it was your power that made you awesome! I fell for you when you were scared and sweating buckets and quaking in your boots!”

“Back when we found a path forward together,” Mineta continues, shortly before being blown away by Deku’s own quirk. “The way you were back then!” 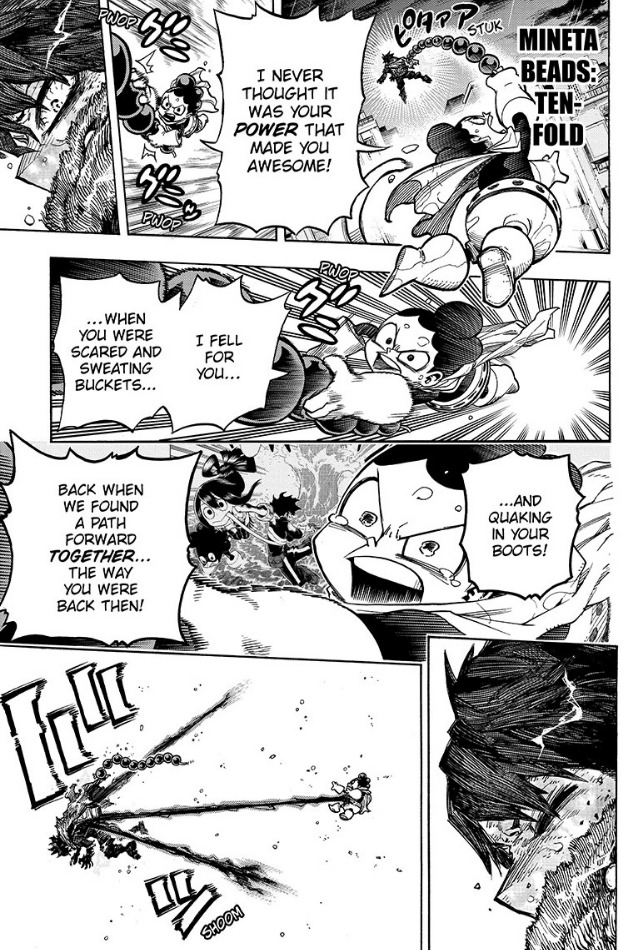 Unsurprisingly, translator Caleb Cook’s use of the phrase ‘I fell for you’, whether intentional or not, led many English-speaking fans to presume that Mineta was expressing romantic feelings for Deku.

However, as clarified by noted Japanese-to-English translator and Aitai Japan founder Audrey Lamsam, while “Yes, official translation is correct. No, it doesn’t mean Mineta is bi.”

“Given the context and Mineta’s character, the vibe is more like “Man, I love ya, you inspire me, I respect you SO much,” she added. “He’s just being dramatic.” 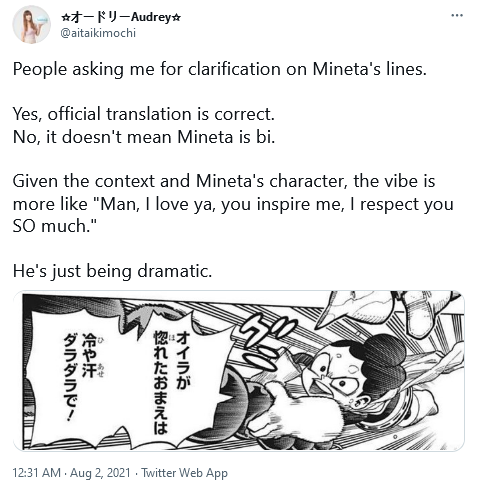 In a follow-up tweet, Lamsam noted that she “asked a few of my Japanese bilingual staff (native Japanese, fluent English), and we came to the conclusion that while 惚れる is a word that generally is used romantically, in this context, it’s more of a deep respect.” 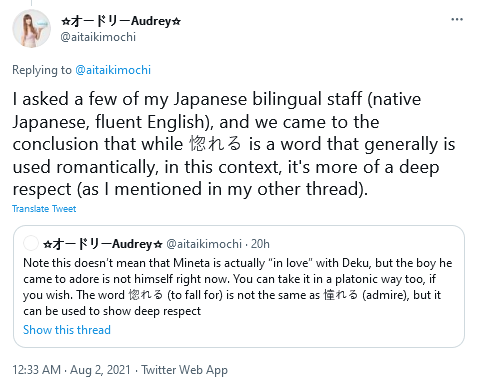 “Also, for those who actually wish for Mineta to be bi, this is not bi-erasure, and you can interpret it how you like,” Lamsam ultimately concluded her thread on the topic. “However, Japanese fans did not interpret this line to be romantic (you can check 峰田 in Japanese twitter), so for this case I think platonic makes more sense.” 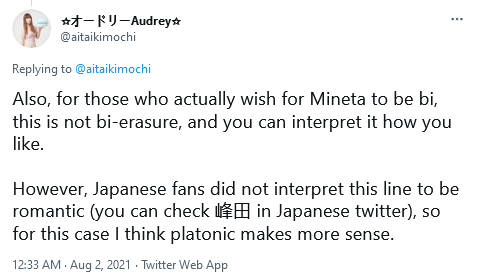 As of writing, neither Shueisha (the manga’s Japanese publisher), Viz Media, nor mangaka Koei Horikoshi, have commented on the confusion surrounding Mineta’s dialogue.

What do you make of Mineta’s most-likely-mistaken bisexuality? Let us know your thoughts on social media or in the comments down below!