When the World Government branded her with the epithet of ‘Devil Child,’ they likely never expected her to take the title literally, but the latest chapter of One Piece reveals that Nico Robin has not only made the moniker her own, but also reclaimed it in a way that makes it terrifyingly her own.

Despite the unleashing of her new Gigante Fleur technique last chapter, which saw Robin  conjure a gigantic clone of herself through the use of her Hana Hana no Mi powers, Chapter 1020, aptly named “Robin vs Black Maria,” finds Black Maria unimpressed by her opponents new ability. 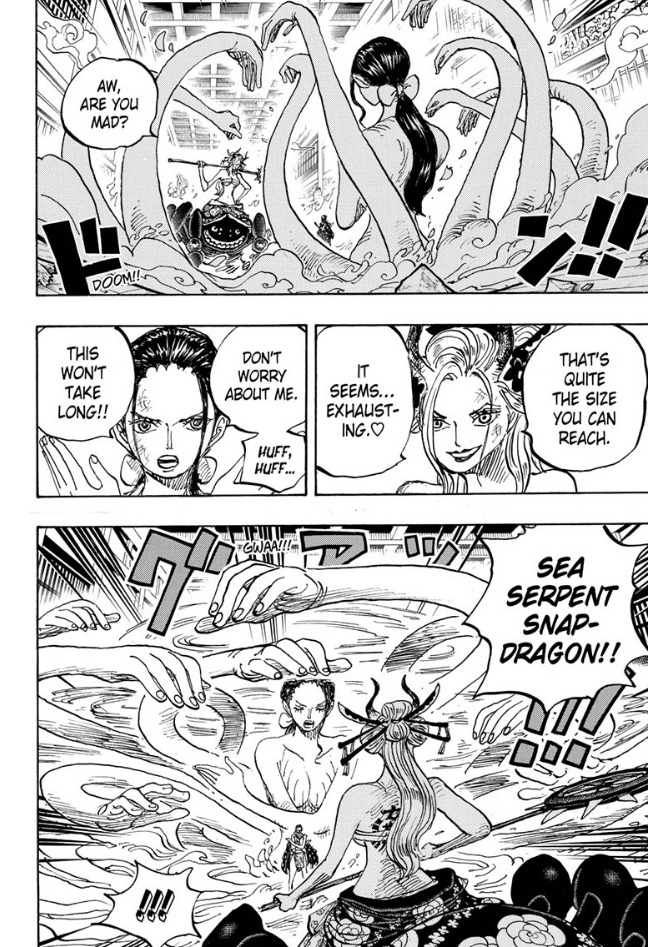 Taunting “That’s quite the size you can reach. It seems…exhausting,” in reference to the energy consumption rate of Robin’s new technique, Black Maria is soon assailed by a number of Robin’s giant arms, but is once again unfazed as she asserts, “That damage still hurts your real body, doesn’t it?!”

“All you’ve done is given me an easier target to hit!!” Black Maria exclaims. “Bigger arms, and more of them!” 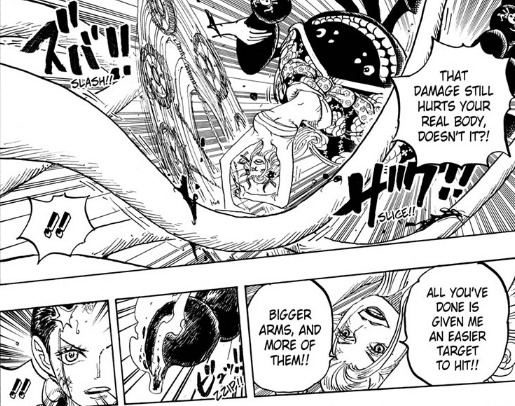 Restricting the Giant Robin’s movement with her own Marianette and Mariapprehend techniques, which allow the villain to produce her own Spider-Man-esque web threads, Black Maria then proceeds to brutally assault Robin and take control of the fight.

“What happened to ‘This won’t take long’?!” asks Black Maria, setting her threads ablaze with the use of her Mariarson attack in order to further exert control over the battlefield. 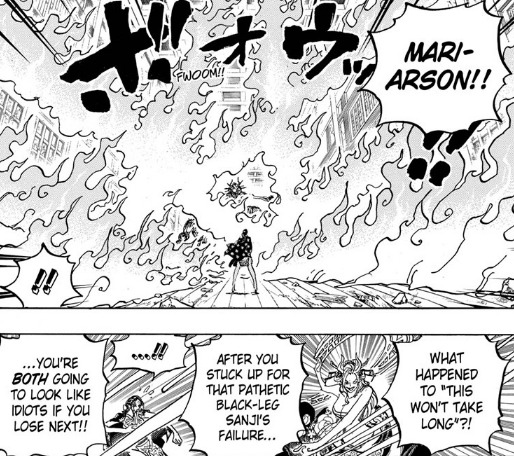 As Black Maria continues to beat on Robin, even further insulting, “What are you even good for, Demon Child?!”, the Straw Hat Pirates’ archaeologist begins to flash back to her time with the Revolutionary Army during the series’ two-year timeskip, specifically to a moment when Koala, a former slave, and Sabo, Luffy’s only-surviving brother, taught her “how to throw a punch if you need it.”

“People will try to kill you Robin! How about [learning] a palm attack?” warns Koala, before Sabo offers “to teach you my Dragon Claw Fist” 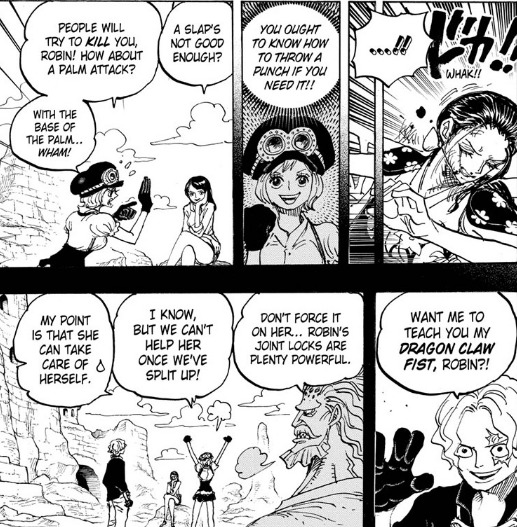 Unleashing the full might of its power upon the battlefield’s roof, Robin successfully causes debris to rain down around the two, extinguishing Black Maria’s flames and subsequently revealing that the battle is far from over. 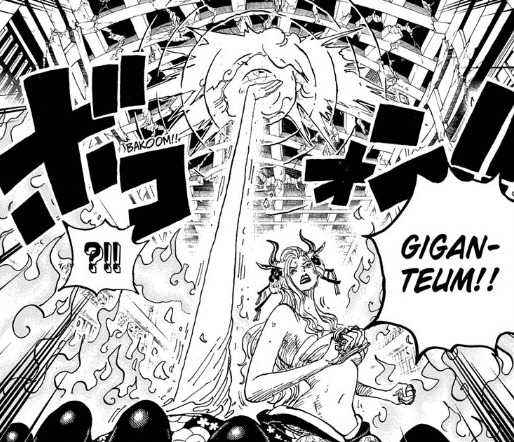 With a cry of “Demonio Fleur!!”, Robin next proceeds to power-up once more, this time taking on the appearance of a demon – much to Black Maria’s surprise. 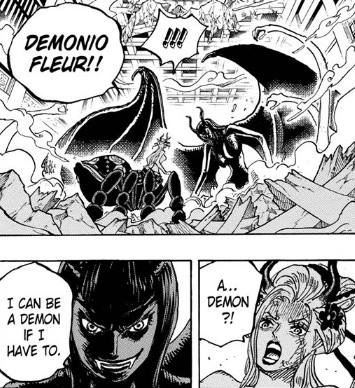 In one of the most monstrous displays of power seen in an arc filled to the brim with overwhelmingly strong combatants, Robin then debuts her new “Grand Jacuzzi Clutch” technique against Black Maria, catching her opponent in a brutal submission hold and applying so much pressure that it causes the villain to unleash a deathly scream throughout the halls of Kaido’s castle. 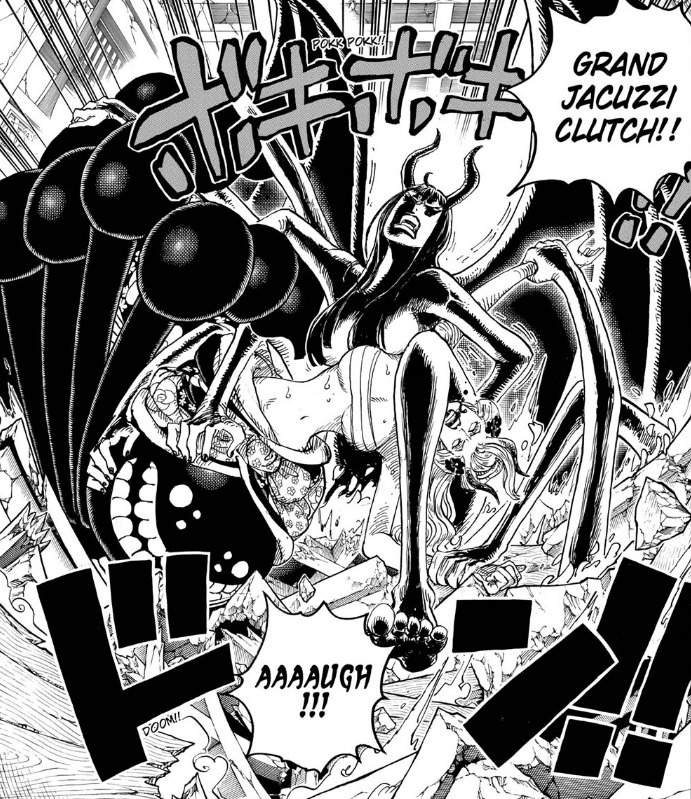 This latest chapter of One Piece is available to read for free on Viz Media’s Shonen Jump section of their website.

The next chapter of One Piece is set to drop on August 23rd.

What do you make of Robin’s new Demon form? How about Monosuke’s request to Shinobu? Let us know your thoughts on social media or in the comments down below!