After a simple painting of a frog led The Gaming Goat to be accused of using a “white supremacist symbol” to promote their new title, Tournament Fishing, a number of tabletop RPG developers have since chosen to believe said accusation and publicly condemn the publisher. 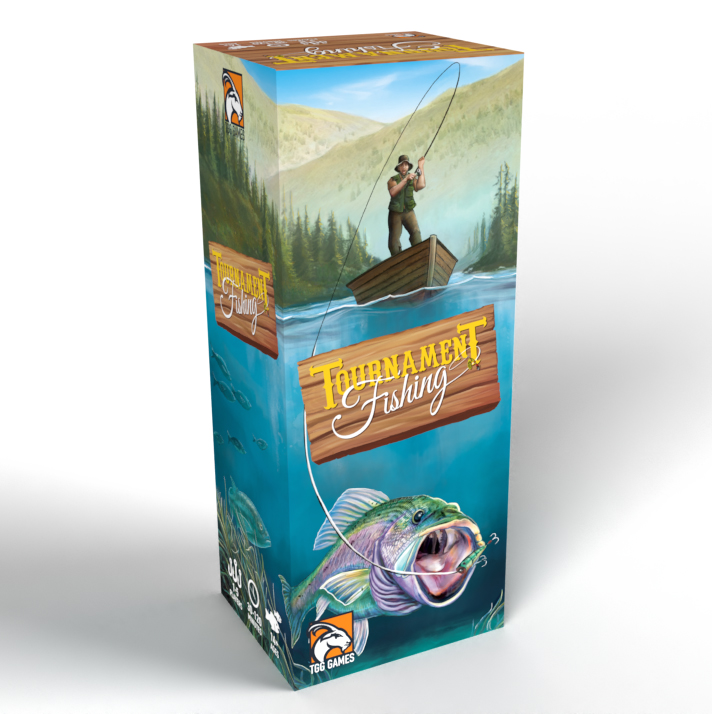 The backlash against the publisher’s newly announced fishing-based deck-building game began shortly after its Kickstarter campaign went public on August 7th when The Dice Tower TTRPG news site contributor Suzanne Sheldon drew attention to how “there’s a game on @Kickstarter (being run by the publisher who just threatened to “make me a good time”) who’s got a frog throwing the wh*te p*wer symbol on the rulebook cover.”

Drawing comparisons between the artwork in question and the exaggerated use of Pepe the Frog and the OK hand symbol, Sheldon tweeted, “Just awful. If you don’t get the symbology being used here, you’ve missed the last 5 years.” 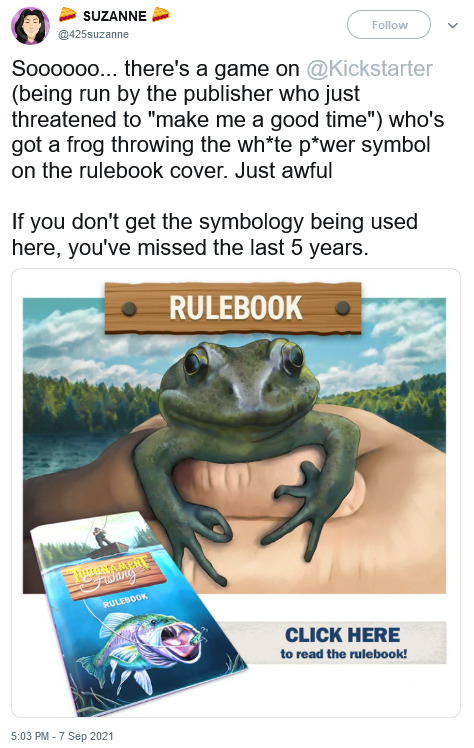 “100% this imagery was intentional to ‘trigger the libs,’” Sheldon continued, turning to call on her Twitter followers to report Tournament Fishing for its perceived use as a ‘hate symbol.’

She added, “So be it. They can laugh at me being upset at their racist bs all they want. If you want to report a project – click the “report the project” button at the bottom… hate symbols are in the prohibited > offensive category.” 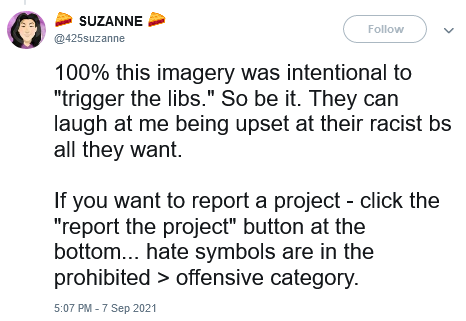 “And look – there’s a reasonable chance that KS will make them change that image to keep the campaign going. And they will. And this terrible thing will be forgotten the next day,” Sheldon surmised. “But they’ve shown who they are. Hold them accountable.” 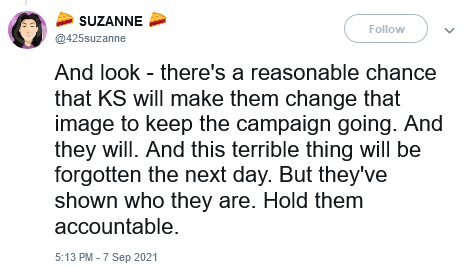 It should be noted that Sheldon’s comment that The Gaming Goat “threatened to ‘make me a good time’” refers to a recent post by the publisher’s CEO, Jeff Bergren, as part of an ongoing spat between the two.

On August 29th, Bergren shared a screenshot to his Facebook of a tweet made by Sheldon in which she asserted, as part of an ongoing Twitter conversation, “Considering who [Bergren] is and his history in the industry…I’d be surprised if he didn’t reply with a s—ty take demonstrating his continuing s—tiness.”

“So many people that I’ve never talked too in my life posting fun things on the internet,” Bergren said of Sheldon’s tweet. “Their friends slandered someone for not wearing a mask in a photo, while all of them have photos without masks. That political party affiliation rides hard! I guess if you have no other significance to the world, then this is the leg you stand on?” 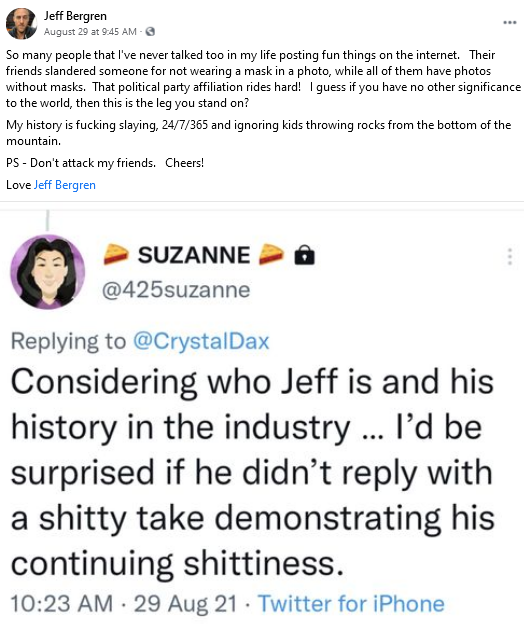 In reply to Bergren, another individual, Dwight Cenac, sarcastically stated, “This person looks like they’d be a lot of fun at parties,” to which Bergren answered, “I bet only us could make her fun at a party. You down for the challenge?”

“Shoot me the ping, I’ll bring the box of cats,” said Cenac, assumedly referencing an inside joke between himself and Bergren.

At some point following Sheldon’s tweets, a caption was added underneath the image of the frog on the Kickstarter page which cheekily read, “This is Bob the frog. Bob is A OH KAY. Bob the frog does not have a hateful bone in his body and loves everyone.” 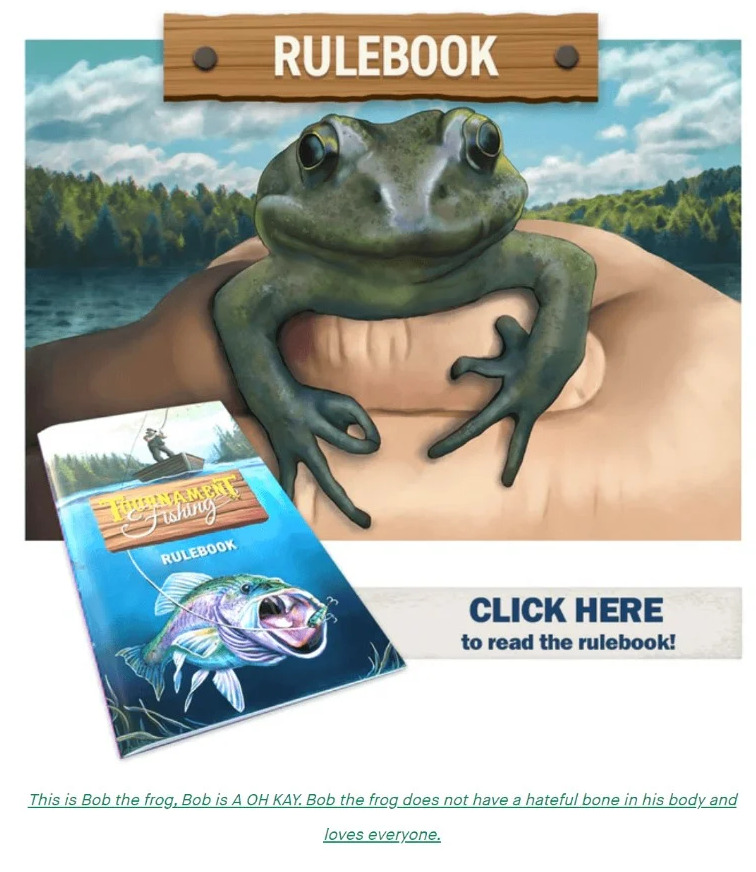 As Sheldon’s accusation began to spread across social media, it eventually spawned its own topic on the popular TTRPG forum Board Game Geeks, wherein Tournament Fishing project manager Mathue Ryann eventually responded to the backlash and explained, “I can assure you there is no ill will or intent with any of our art images.”

He continued. “While I don’t want to see anyone leave the campaign if you want to cancel your pledge and are unhappy I completely understand and that and it is 100% obviously your right.” 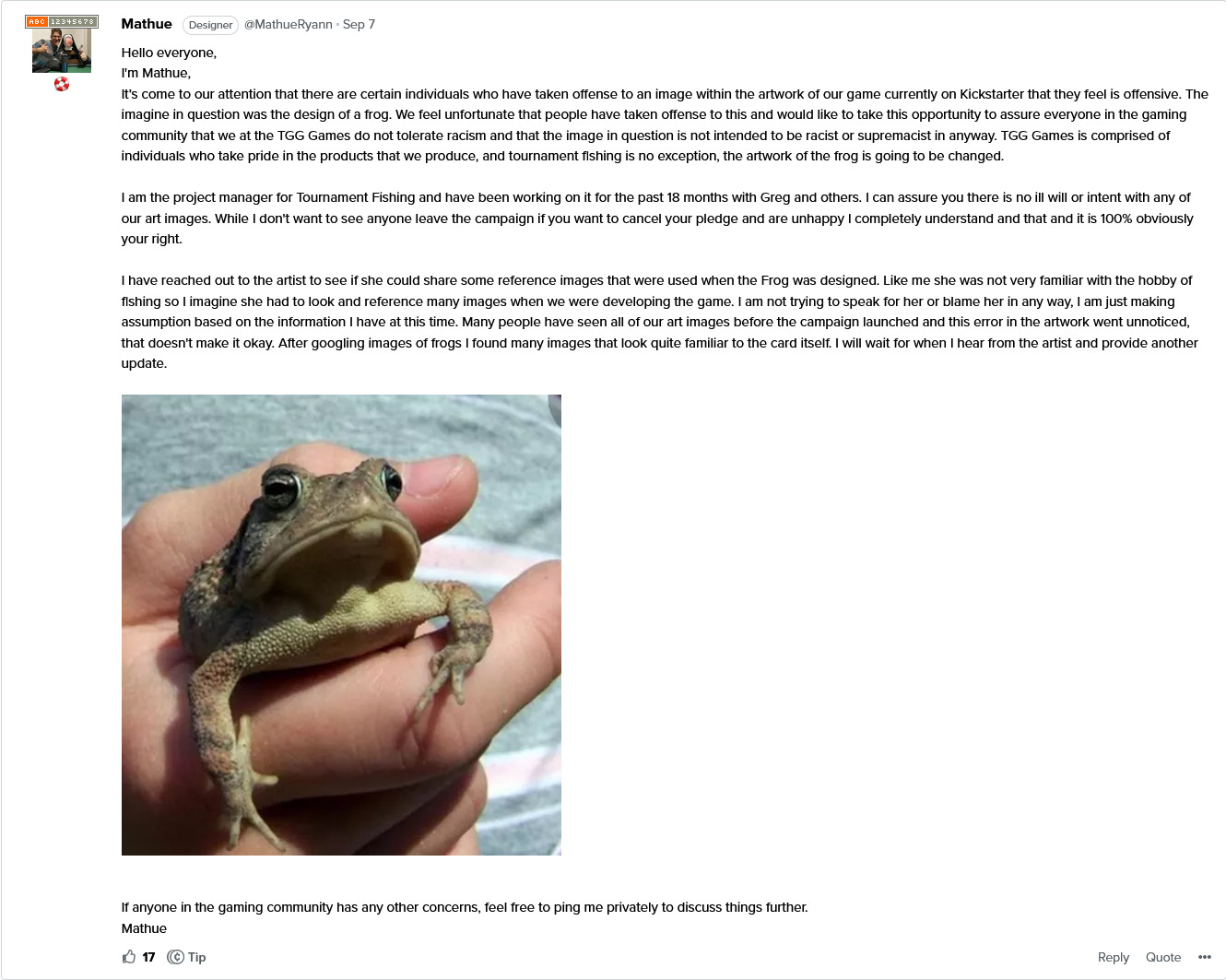 Reaching out to the artist, Ryann later shared the reference photos used in the creation of the frog artwork as further proof that “none of the art in the game is intended to be ill willed or hurtful.”

However, though he noted “100’s of people look at all the art in the game and this was not something that was noticed by anyone,” Ryann then announced, “Now that is had been brought to our attention we will change the card art.” 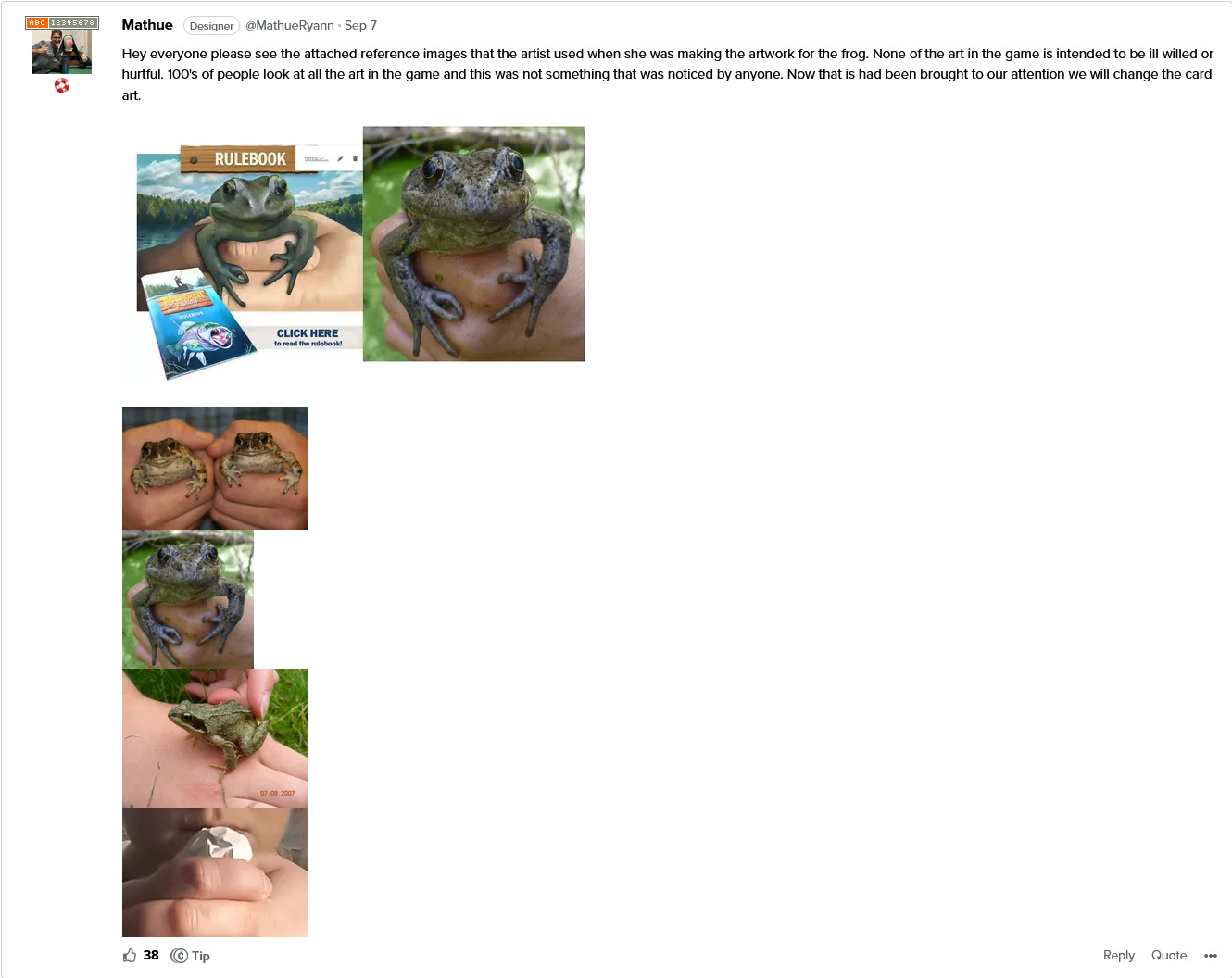 Yet, despite this explanation, The Gaming Goat still received condemnation from their TTRPG peers, as many designers and developers refused to accept that the artwork was anything but a ‘Nazi dogwhistle.’

On Board Games Geek, Badgers From Mars designer Andy Richdale announced that the developer had “exercised its right to end its licencing agreement with TGG Games which will come into effect later in the year. The reason for this is the inappropriate behaviour that Jeff (CEO of TGG Games) has displayed when communicating with others in the hobby.”

“Further comments in response to concerns raised around their latest Kickstarter campaign have been unacceptable to us and failed to meet even the minimum standard we would expect from an industry professional,” he added. “We truly hope that Jeff gets an opportunity to reflect on recent events and come to an understanding of why these comments are unacceptable.”

On Twitter, Mr. Cabbagehead Garden developer LudiCreations wrote, “Racist statements and actions, explicit or implied threats, abusive and aggressive behavior are something that we condemn and deplore, whether it is in social media or in person.”

“We do not want to be part of any community or business relationship where those are tolerated or taken lightly,” they added. “So, to be clear: We will not have any future relationship with anyone making light of white supremacy and its signals, no matter how subtle.”

Cauldron and Unbroken creator Artem Safarov similarly declared that he would be withdrawing from “a solo game design to be published next year by TGG Games” as a result of what he believed was a “dismissive/defensive reaction to the issue of white supremacy/frog image on the Tournament Fishing campaign.”

“For the record – I am fully confident that the image itself was accidental,” he clarified. “The reaction to it, however, made light of the issue and was a missed opportunity to understand the connection, acknowledge the threat of white supremacy and denounce it loudly and boldly.”

Ultimately, on September 11th, The Gaming Goat took to Tournament Fishing’s Kickstarter page to address the “frustrations about an image within the game and the initial response.”

“It was never our intent to offend anyone,  we do not tolerate or support any form of racism,” they reiterated. “TGG-Games prides itself in creating games with diverse characters that promotes inclusivity and we believe that will shine through in this game.  We truly value any chance to make the game better with not only stretch goals, but also with community feedback and we look forward to continuing this campaign with excitement and positivity.” 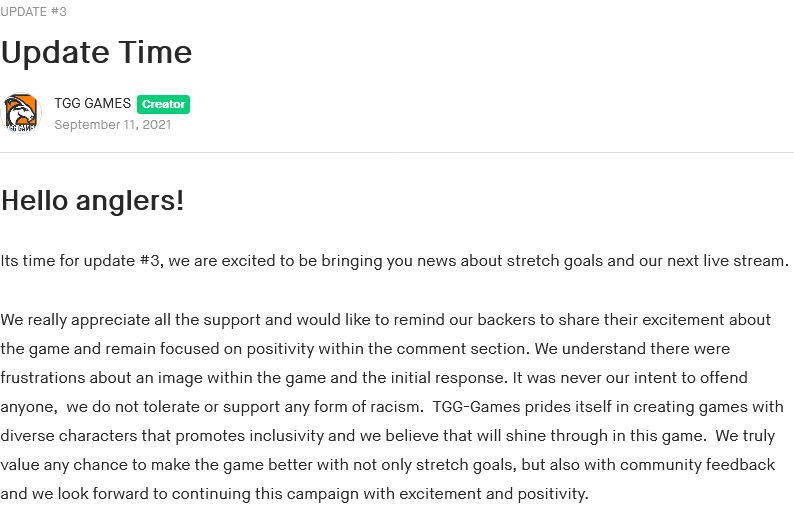 He added, “The people like Suzanne, who want to create anger, hostility, and division in the board game industry, in the sci-fi industry, and the comics industry, they are going to lose at the end of the day and they know it. And that’s why they are so miserable they want to drag everybody else down with them.”

What do you make of the backlash to both Tournament Fishing’s artwork and The Gaming Goat’s subsequent response? Let us know your thoughts on social media or in the comments down below!