Steven S. DeKnight, the Spartacus creator and Daredevil Season 2 showrunner who recently began to dip into the realm of comic book writing with a series of short Marvel stories surrounding some of the company’s more street level heroes, has announced that he will no longer work with the comic book publisher after discovering that C.B. Cebulski was promoted to and kept on at his current role as EIC despite having a documented history of falsely presenting himself as an Asian comic creator. 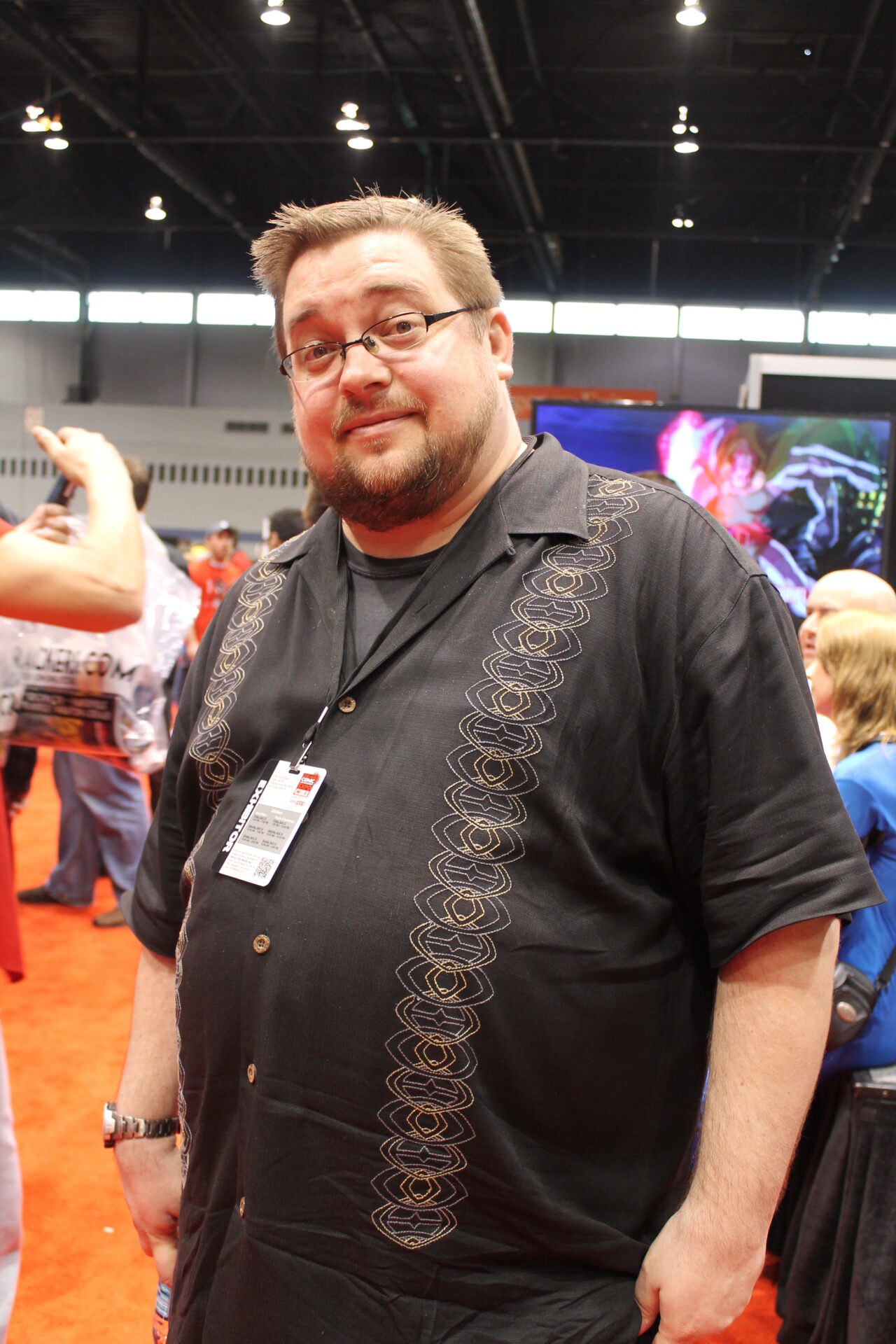 Prior to his stint as EIC, Cebulski worked for Marvel beginning in the early 2000s, serving variously as the publisher’s Talent Liason, Associate Editor, and Senior VP before being promoted to his current position.

However, due to a Marvel rule which barred editorial staff from creating comics (either for the publisher or for a competitor) without special permission and, in the case said permission was granted, asserted that said individual could not be paid for said work, Cebulski began to write under the pseudonym Akira Yoshida.

Basing the pseudonym off of his then-current residence in Japan and his ability to speak Japanese, Cebulski would go on to write a number of ‘Japanese-themed’ titles for Marvel, including Elektra: The Hand and Wolverine: Soultaker, which leaned heavily on Japanese imagery and self-purported by ‘Yoshida’ to be influenced by his own Japanese identity. 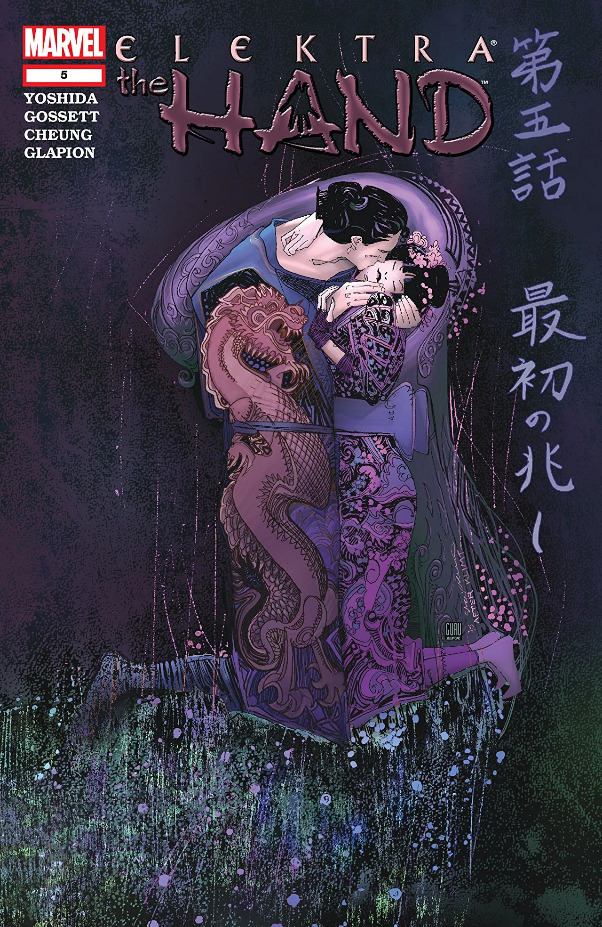 Eventually, in 2017, then-Image Comics Brand Manager David Brothers called attention to Cebulski’s identity as the Asian creative, prompting the long-time Marvel staffer to admit – after years of denial – that he and Yoshida were one in the same.

“I stopped writing under the pseudonym Akira Yoshida after about a year,” said Cebulski in a statement issued to Bleeding Cool editor Rich Johnston at the time. “It wasn’t transparent, but it taught me a lot about writing, communication and pressure.”

He continued, “I was young and naïve and had a lot to learn back then. But this is all old news that has been dealt with, and now as Marvel’s new Editor-in-Chief, I’m turning a new page and am excited to start sharing all my Marvel experiences with up and coming talent around the globe.” 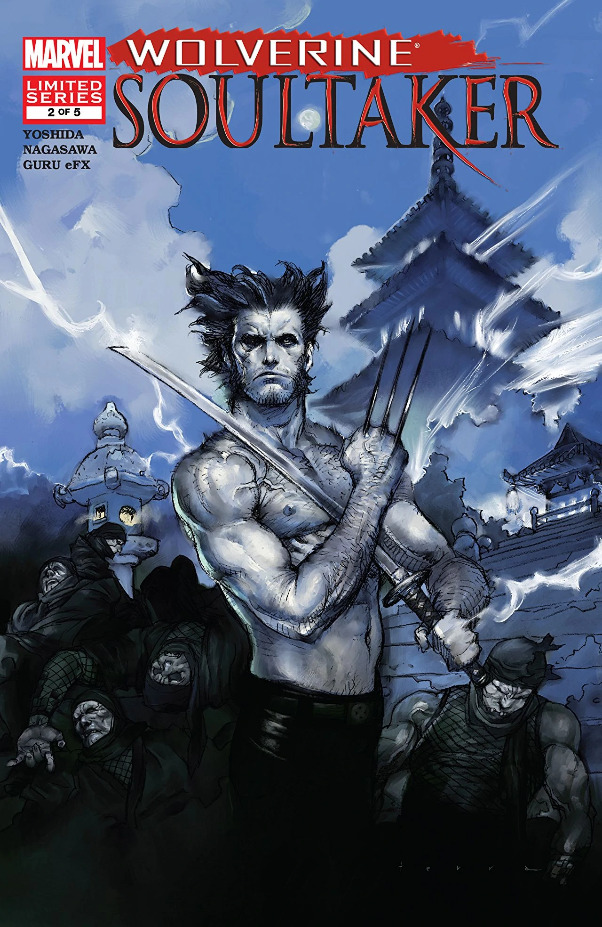 As the incident occurred years ago and the powers that be ran an insanely successful damage control campaign to protect Cebulski (after all, if he had posed as any other demographic than Asian, he would have been strung up on social media near immediately, and certainly would not have retained his high-level Marvel position), DeKnight was only made aware of the Marvel EIC’s history on October 9th, when Harley Quinn: The Animed Series: The Eat. BANG! Kill. Tour writer Tee Franklin resurfaced the story.

“Im criiiinnneee,” wrote Franklin, bringing up the subject seemingly apropos of nothing. “This is Akira Yoshida — a white man. Current editor in chief at Marvel.” 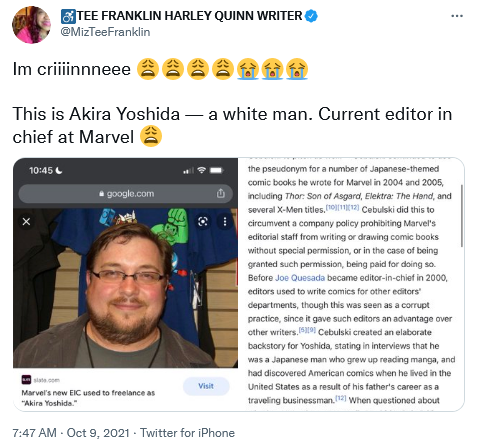 Taking notice of Franklin’s tweet thanks to Digital Domain Senior Animator Elaina Scott’s reaction to the story, DeKnight replied to the revelation asking “How does this man still have a job? Completely unacceptable.”

When met with a response of “Seriously. SO gross,” from Scott, DeKnight asserted, “I had no idea. I love writing for Marvel comics, but this changes the equation. Drastically.”

“There are so many great editors there,” wrote DeKnight. “To allow a man who climbed to the top through cultural identity theft to remain in that position is unconscionable.” 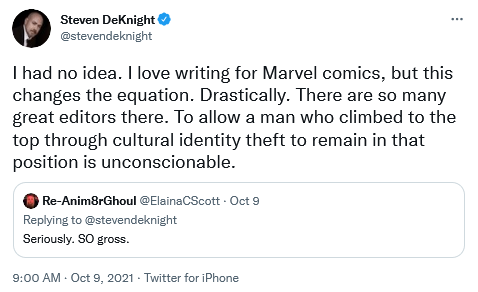 In discussion with another fan who stated they were “trying, operative word, to get past the immediate pungent aroma and look at the whole thing to try and understand what was, and what could have been, done,” DeKnight continued, “Totally understand. For me the possibility of ever being named editor-in-chief should have shrunk to zero the moment this was revealed.”

“If he already was editor-in-chief at that point, he should have been terminated,” he added. 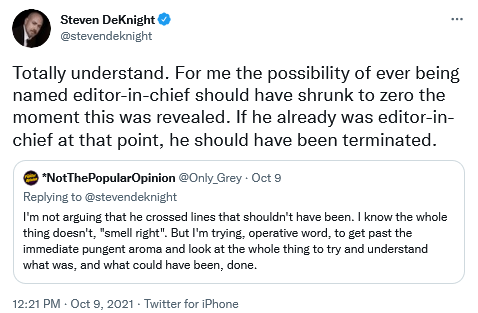 This opinion prompted a response from Bleeding Cool editor Rich Johnston, the reporter whom Cebulski came clean and one of his chief defenders, attempted to make excuses for the EIC’s continued role at Marvel – despite the company’s own overtly-identiarian views.

“It was in the process of him becoming EIC, with coverage I had given regarding the situation coming to greater prominence, that he chose to confess to Marvel,” argued Johnston. “It did not go over well, there were serious consequences, but he got the position still.”

When DeKnight explained that he had “zero problems with pseudonyms” but believed that “when you present yourself as a different race (or gender) to deceive and get ahead, that veers into fraud, in my opinion,” Johnston again ran cover for Cebulski, attempting to split hairs by arguing that “from everything I reported and researched at the time, it was to deceive, but not to get ahead.” 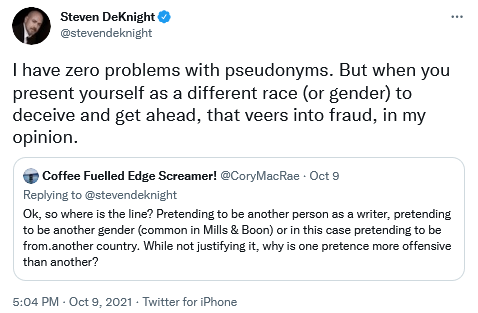 “It tapped into his interests, while providing a way to get writing work outside of his Marvel editorial role, which was absolutely against Marvel’s rules,” Johnston bafflingly defended Cebulski.

Pushing back on this defense, DeKnight asked Johnston, “What was the purpose of the deception if not to get ahead? Not to mention the sheer lack of any sense of what’s right and wrong in the assumption of an Asian identity by a Caucasian writer,” to which the Bleeding Cool founder, once again disingenuously, argued that Cebulski’s pseudonym was not taken up “to get ahead at Marvel.” 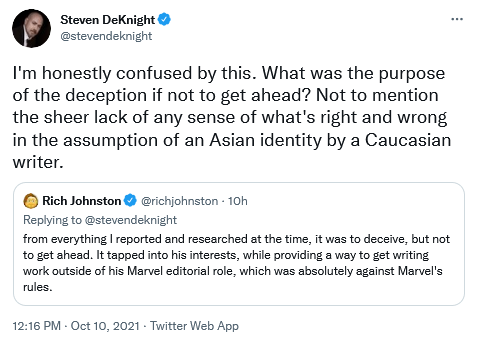 “He would never have been able to reveal it,” said Johnston. “It did not aid his career as CB, just as Akira. When Marvel changed the rules, he dropped the identity. Revealing it cost him a lot, he got EIC despite it, not because.”

According to a follow-up tweet by Johnston, the revelation of his identity as Yoshida led Cebulski to take “a major financial hit” in order to keep his job.

In one of the most disingenuous and socially partisan deflections of all time, Johnston further attempted to excuse Cebulski’s deception as having “come from a love and deep appreciation of the culture, and most Asian and American Asian creators I talked to since were supportive of his hiring of such talent far and above what Marvel had previously.”

(Again, I dare anyone to try pulling this exact excuse, same language and all, with any other demographic, and see how many of Johnston’s or Marvel’s associates would run to defend such a ruse. Spoiler: The answer is none.)

However, ultimately, DeKnight saw through Johnston’s excuses and attempts to derail the conversation, stating, “Yes, that I understand. I’m not implying he did it to get ahead at Marvel. What I’m saying is the fact that he did this at all should have excluded him from the EIC job.”

Calling out the House of Idea’s own hypocrisy, DeKnight opined, “His actions illustrate a deep insensitivity to cultural appropriation. And a disregard of Marvel rules.” 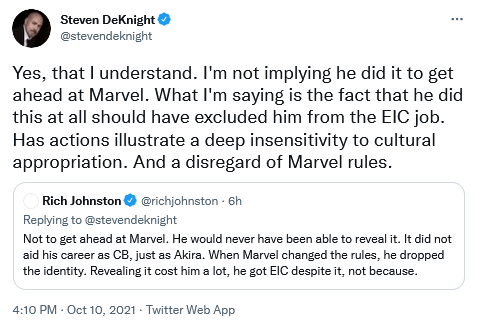 In conclusion to his thoughts, DeKnight clarified that he was “not saying one race can’t WRITE characters of another race,” but rather, “what you can’t do is PRETEND to be a different race, no matter what you’re writing.”

“The fact that this is even a question is beyond troubling,” he lamented. 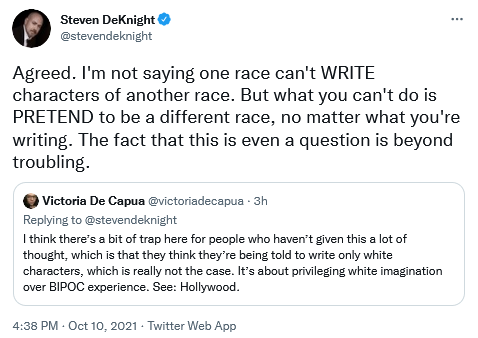 DeKnight’s last Marvel stories – two series based on Wolverine and Black Widow, respectively, which tie into the publisher’s upcoming Wastelanders event – are set to release in December.

What do you make of DeKnight’s resignation? What about the obvious double-standard being defended by individuals such as Johnston? Let us know your thoughts on social media or in the comments down below!