An anonymous individual has reportedly threatened to “ruin” Wizard Tower Games by declaring them “the enemy of those out there who stand for trans rights, inclusiveness, and gaming” unless the fledgling table-top game developer ceases its current working relationship with the newly-revived incarnation of TSR Games.

The threat was first made public when, on October 25th, Wizard Tower Games Principal Project Manager and Founder Don (no last name provided), who took to the company’s official Twitter account to publish a press release informing their followers that “On October 24th, 2021, Wizard Tower Games received an email from an unknown individual who stated they would utilize social media to ruin and or harm our company if we continued our business relations with TSR Hobbies [the formal company name for TSR Games] located in Lake Geneva Wisconsin.”

However, Don asserted that the team at Wizard Tower Games wanted “to make it clearly known that Cyber-Bullying on any level will not be tolerated.” 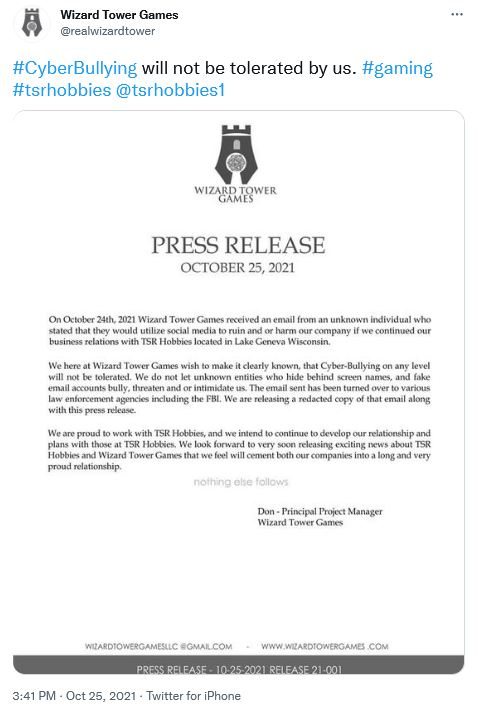 “We do not let unknown entities who hide behind screen names and fake email accounts bully, threaten, and or intimidate us,” he continued. “The email sent has been turned over to various law enforcement agencies including the FBI. We are releasing a redacted copy of that email along with this press release.”

In conclusion to his press release, Don added, “We are proud to work with TSR Hobbies, and we intend to continue to develop our relationship and plans with those at TSR Hobbies. We look forward to very soon releasing exciting news about TSR Hobbies and Wizard Tower Games that we feel will cement both our companies into a long and very proud relationship.” 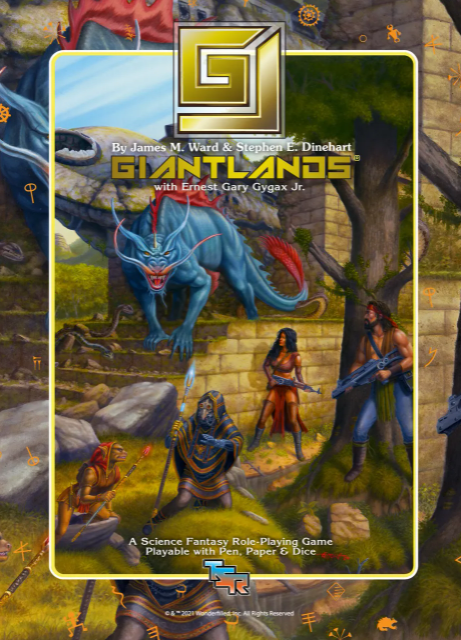 As promised, Don then proceeded to publish the anonymous email in question, which reads as immature and erratic as one would expect from an individual who believes threatening to sic a Twitter mob on someone they disagree with is admirable activism.

“We are trying to do you a favor,” wrote the anonymous individual. “You may think about staying away from TSR. They will bring new and upcoming game companies like you down. We see you are on their flyer for their event in March which has been moved to that date ONLY….to suck money off of Garycon.”

They then warned, “We suggest you do go…You DO NOT want us to get on Twitter and begin talking about Wizards Tower. Be smart…” 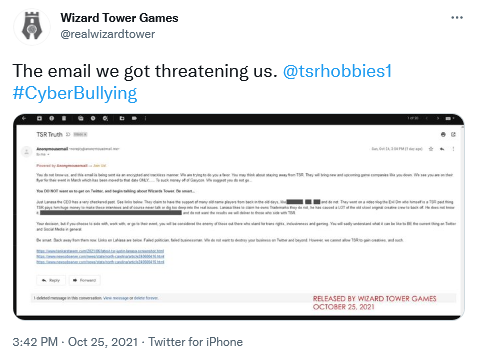 Pointing to the “very checkered past” of TSR Games CEO Justin Lanasa – to which they provided a video of Lanasa encouraging two women to “grits fight to see what shop girl will be head shop girl” at his former tattoo shop and a Facebook post wherein he decried woke culture as evidence – as something they could wield against Wizard Tower Games, the individual then claimed that Lanasa had been lying about many of his current business dealings.

“[Lanasa] claims to have the support of many old name players from back in the old days […] and do not,” the individual asserted. “They went on a video vlog the Evil Dm who himself is a TSR paid thing. TSR pays him huge money to make these interviews and of course never talk or dig too deep into the real issues.”

They further stated that though “Lanasa likes to claim he owns Trademarks they do not,” and in boasting as such “has caused a lot of the old skool original creative crew to back off.”

Ultimately, the anonymous individual declared to Wizard Tower Games, “Your decision, but if you choose to side with, or go to their event, you will be considered the enemy of those out there who stand for trans rights, inclusiveness and gaming.”

“You will sadly understand what it can be like to BE the current thing on Twitter and Social Media in general. Be smart. Back away from them now,” the individual concluded. “We do not want to destroy your business on Twitter and beyond. However we cannot allow TSR to grain creatives, and such.” 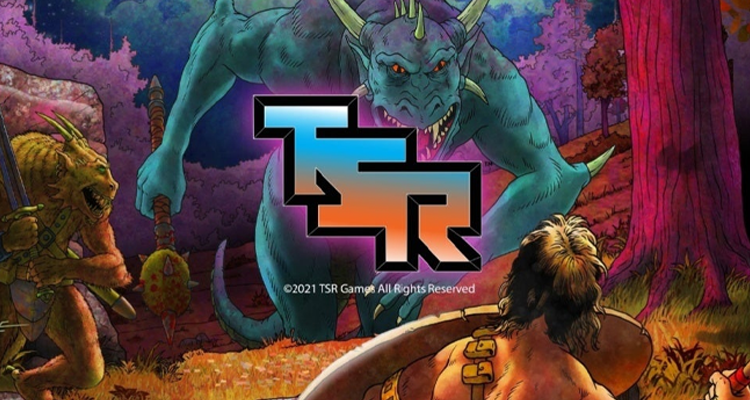 What do you make of the anonymous email sent to Wizard Tower Games and the company’s subsequent response? Let us know your thoughts on social media or in the comments down below!