Related: Giancarlo Esposito Says His Favorite The Mandalorian Co-Star To Work With Is Gina Carano

Esposito recently appeared at Fan Expo Denver 2021 and during his appearance did a nearly hour long sit down Q&A session.

During that Q&A session at around the 45:10 minute mark below he was asked, “In The Mandalorian who is your favorite co-worker to work with?”

Esposito responded, “My goodness. Okay so you’re asking me for one. Yeah. I have to say and this may be… Well, okay, I’ll say it without hesitation. Gina Carano.”

He continued, “She went through a lot the last year and I’m not going to weigh in on any of that in particular other than any of her political beliefs or what she said whether I think it’s inappropriate or appropriate or not.”

“Right, we as actors, yeah, we probably sometimes, I know for me, I should just shut my mouth, but sometimes I can’t and I’ve got to say what I believe because it has to go on record,” the Moff Gideon actor said.

“I loved working with her. She’s warm, and beautiful, and wonderful. And I don’t care what her politics are. I love the fact that she came to acting late and that she was so raw and original and beautiful. And I just think she’s a lovely person. So I shout her out and I say she’s one of my favorites,” he concluded.

In response to these comments, Carano responded on Twitter writing, “I think the world of you too, Giancarlo Esposito. You make the world a better place.”

She added, “Love to see you shine. One of the best actors and people I’ve ever stood across from. #MoffGideon.” 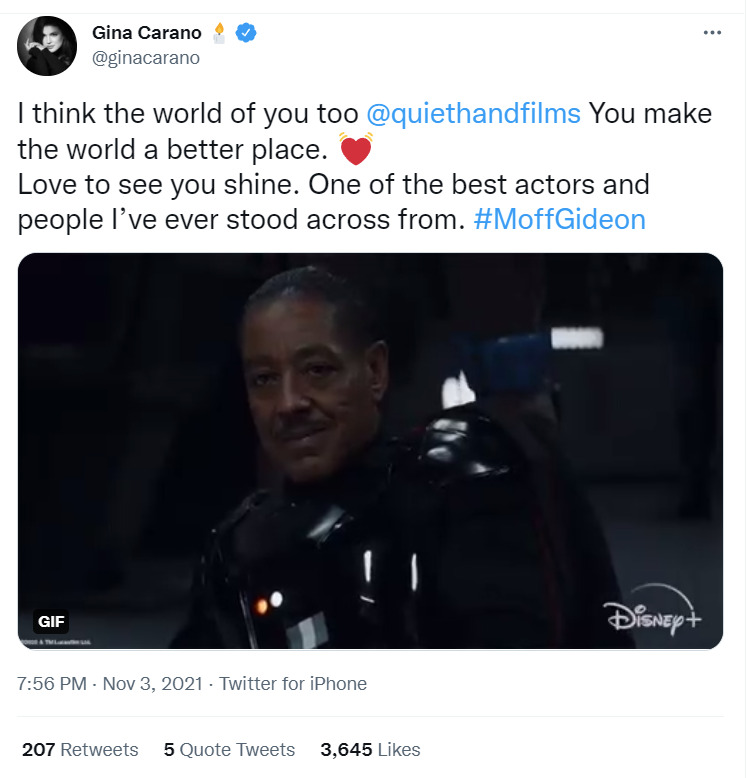 Carano was fired from The Mandalorian by Disney and Lucasfilm back in February.

A spokesman released a statement announcing the firing to a number of publications. The statement begins, “Gina Carano is not currently employed by Lucasfilm and there are no plans for her to be in the future.”

They then added, “Nevertheless, her social media posts denigrating people based on their cultural and religious identities are abhorrent and unacceptable.”

While Carano was fired from The Mandalorian, she’s partnered with The Daily Wire to work on numerous projects including an adaptation of Eric Red’s White Knuckle novel and her current project Terror on the Prairie.

In fact, Carano has been sharing a number of behind-the-scenes photos from Terror on the Prairie to her Instagram including shots with her co-stars like Gabriel-Kane Day-Lewis.

She also shared a video of Fiona, who works in the film’s wardrobe department, twirling around in a western burlesque style outfit.

The official description for Terror on the Prairie states, “the film centers on a pioneer family living on the Great Plains of Montana who must fight for their lives against a gang of vicious outlaws.”

Along with Day-Lewis and Cerrone, the movie also stars Nick Searcy, Tyler Fischer, Heath Freeman, and Samaire Armstrong. It is directed by Michael Polish and being produced by Dallas Sonnier and his Bonfire Legend team.

What do you make of Carano’s response to Esposito?