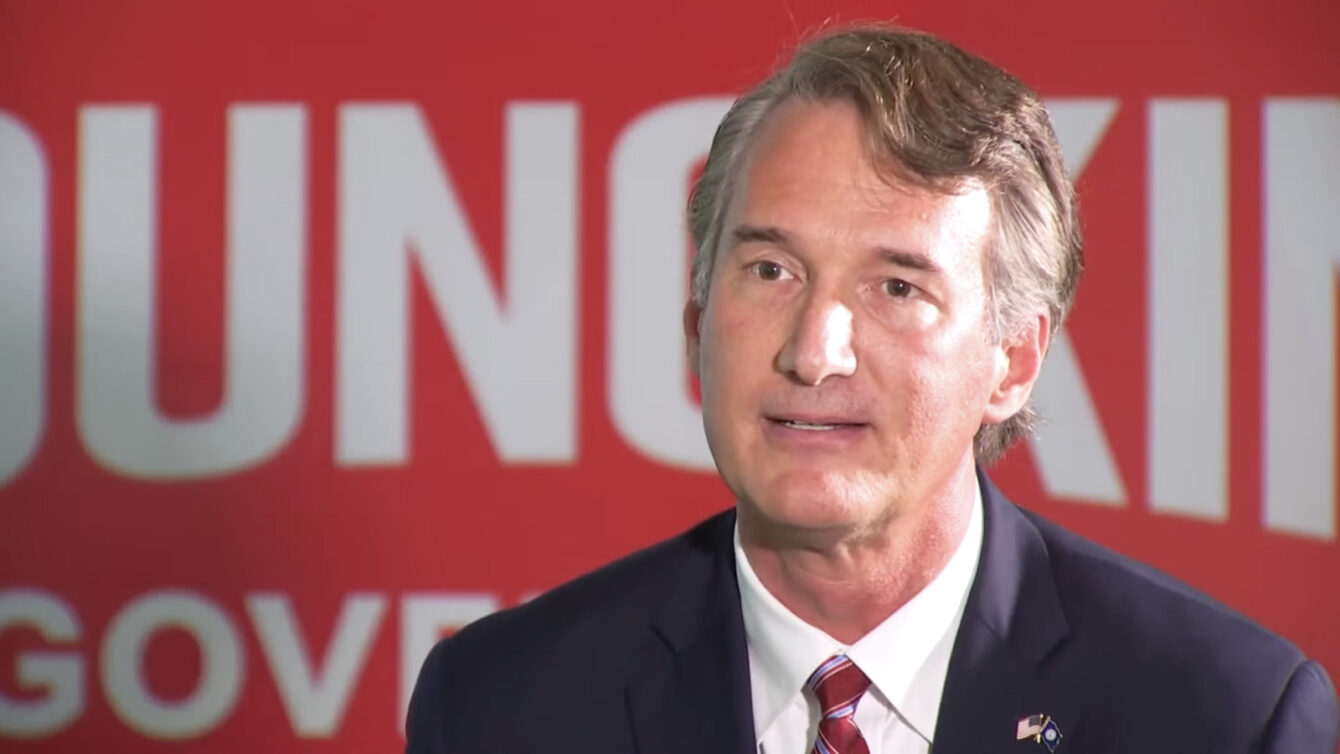 Youngkin’s victory has particularly triggered these woke Hollywood elitists due to his promise to ban – on day one, no less – the teaching of Critical Race Theory in Virginia schools.

The newly-elected governor explained his position during a recent appearance on Fox News’ Life Liberty & Levin, telling host Mark Levin, “What we know is [Critical Race Theory] teaches children to see everything through the lens of race and then to divide them into buckets, and have children that are called privileged and others that are victims, and it’s just wrong.”

“And it, in fact, forces our kids to compete against one another and steals their dreams,” he continued. “And, in the immortal words of Dr. Martin Luther King Jr., we’re called to judge one another based on the content of our character and not the colour of our skin. And that’s why there’s no place for Critical Race Theory in our school system, and why, on day one, I’m going to ban it.” 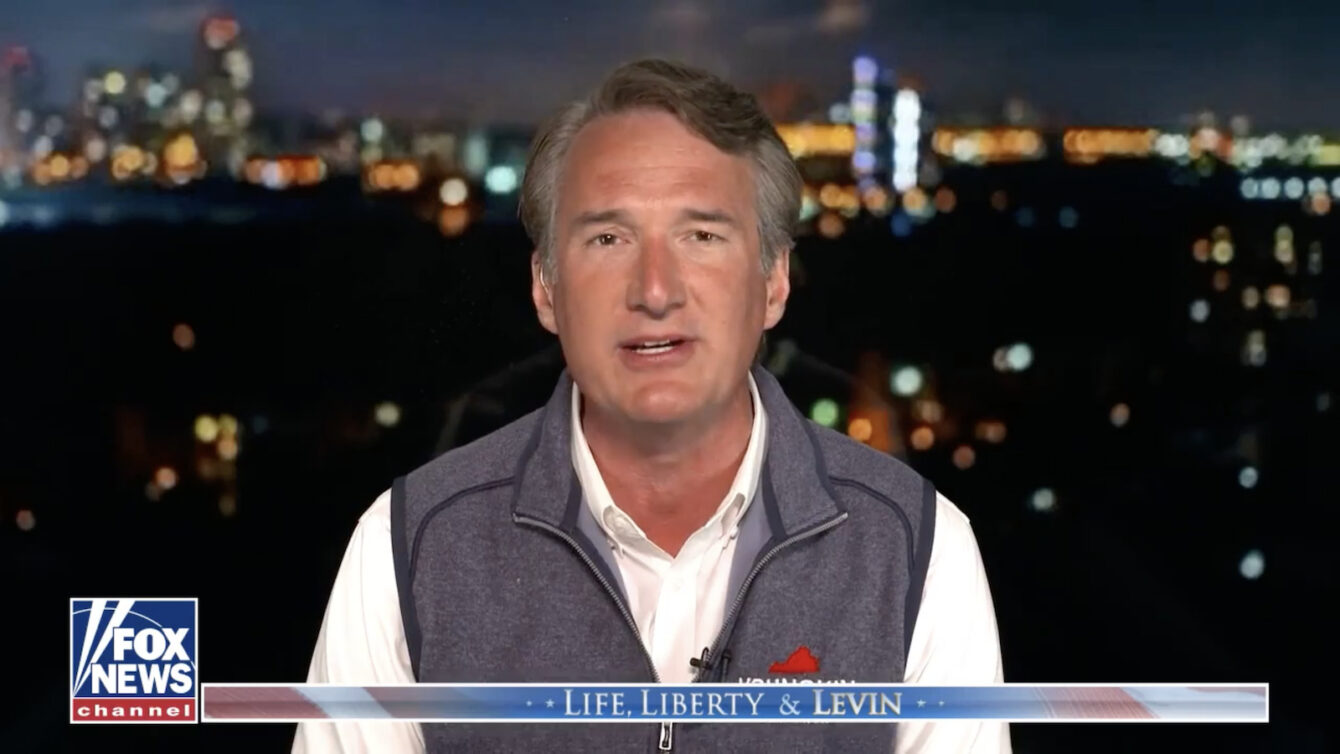 Enter the insufferable woke Hollywood elitists, who took to social media in the wake of his victory to not only express their disappointment with the news, but also fearmonger with a number of unfounded claims.

Can’t Hardly Wait star Ethan Embry could hardly wait to share his opinion on Twitter, writing, “Tonight is what happens when no one is held accountable.”

“Enjoy the last year of Democrat control, because we won’t see it again for a very long time,” he cried. “35% of the country are about to run ALL THE S—T.” 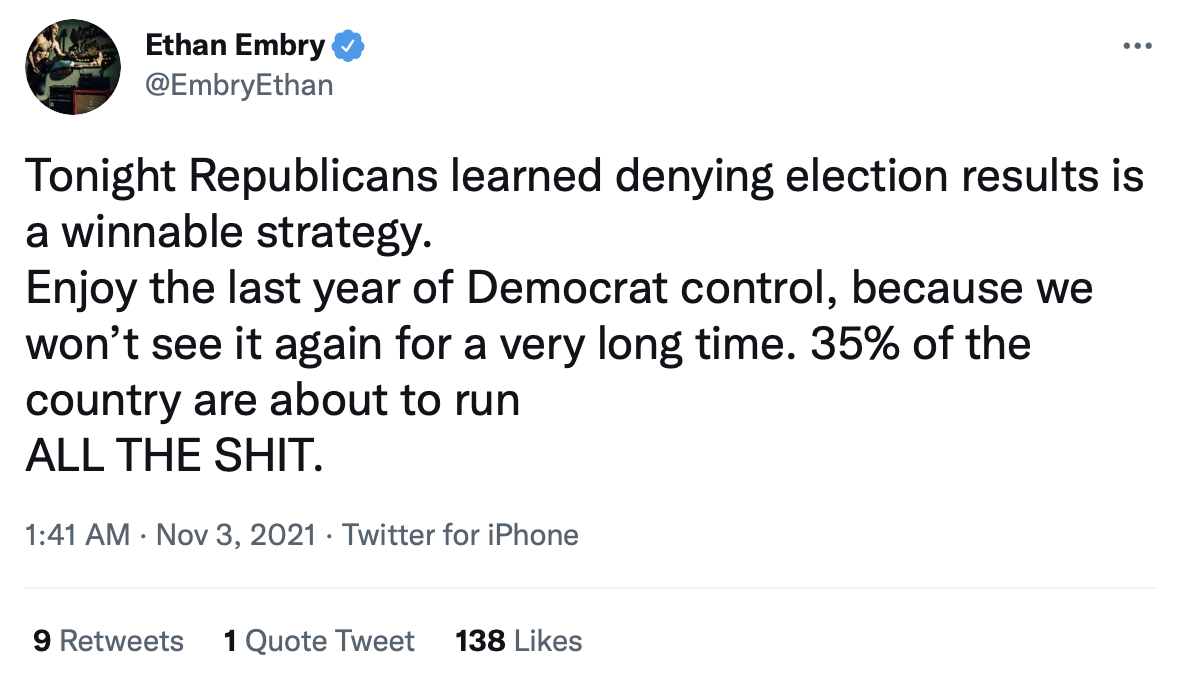 Director, actor, and raging left-wing activist Rob Reiner was eager to stop overanalysing the result of the Virginia gubernatorial race, opting instead to focus on what’s next on the woke agenda Democrats are so desperately pushing.

“No time for hand wringing and over analyzing Virginia,” said Reiner. “Pass Infrastructure and Build back better. Then focus like a laser on Voting Rights.” 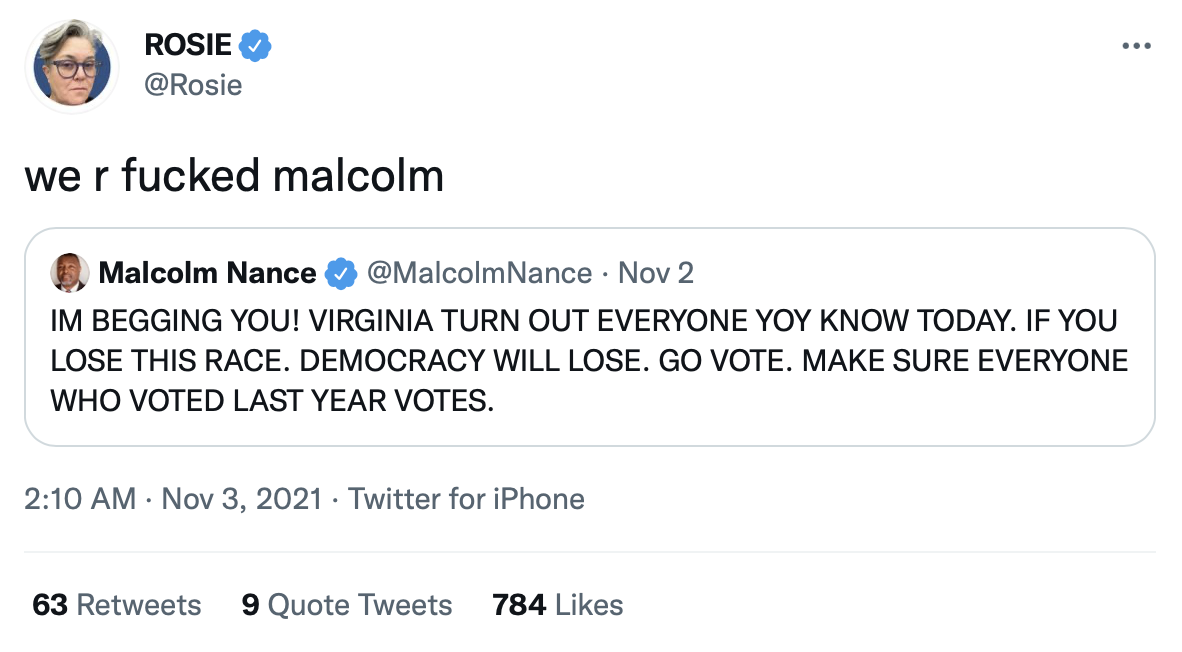 “If ‘critical race theory opposition’ is going to decide elections, it will be a historic victory for people sticking their fingers in their ears and saying LA LA LA LA LA LA LA LA. Once again, way to go, Whites!” wrote woke, unfunny comedian Andy Richter prior to the election.

Though Richter did not comment on the Virginia gubernatorial race results, he did retweet self-proclaimed anti-racist writer and activist Tim Wise, who alluded to Youngkin’ promise to ban CRT from schools and declared, “Most critics of Critical Race Theory and anti-racist education believe Black people are culturally or biologically inferior to white people.”

“They should be forced to admit it,” he added. “That’s the only other explanation for inequity once you rule out systemic racism.”

In a fairly racist comment likewise made in reference to Youngkin’s CRT ban, comedian Michael Ian Black wrote, “Im just happy that white kids in Virginia will finally feel okay about themselves.”

An uncharacteristically nonpartisan take was shared by The Batman actor Jeffrey Wright, who asserted, “Republican and Democrat politicians have one thing in common: they’re both expert in sabotaging the Democratic Party.”

Conversely, singer Cher declared that she done holding her tongue regarding political affairs, going on to claim that the Republican Party is a “white’s only club.” 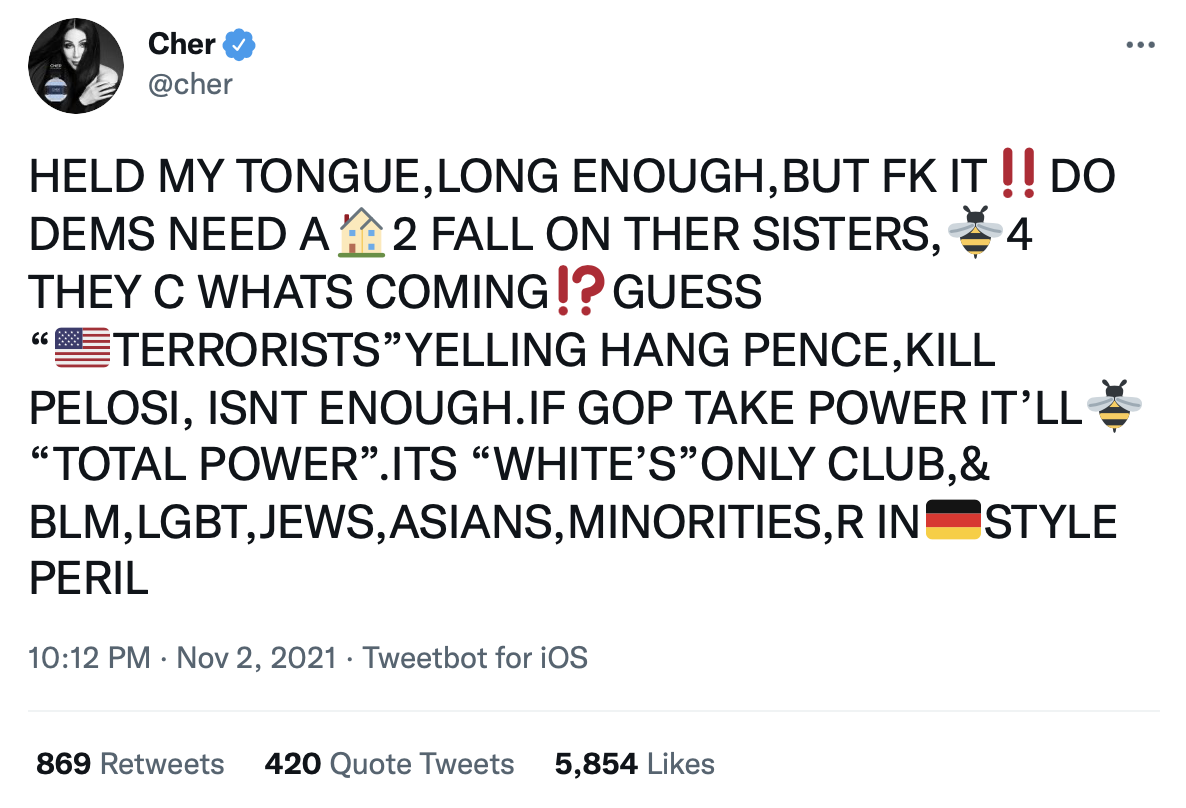 In a follow-up tweet, she added, “JOE WORKS TIRELESSLY 2 WORK WITH CONG,& PASS BILLS 2 HELP EVERY DAY AMERICANS,& HE’S HIT FROM DEMS ON RIGHT,&LEFT.THEY CAUSE GRIDLOCK,WHILE GOP SIT & PLAN HOW2 PICK OUR BONES CLEAN IF WE FAIL,” concluding, “GOP ARE NAZI’S IN LOCKSTEP.ITS DIFFERENCE BETWEEN DEMOCRACY& DICTATORSHIP.” 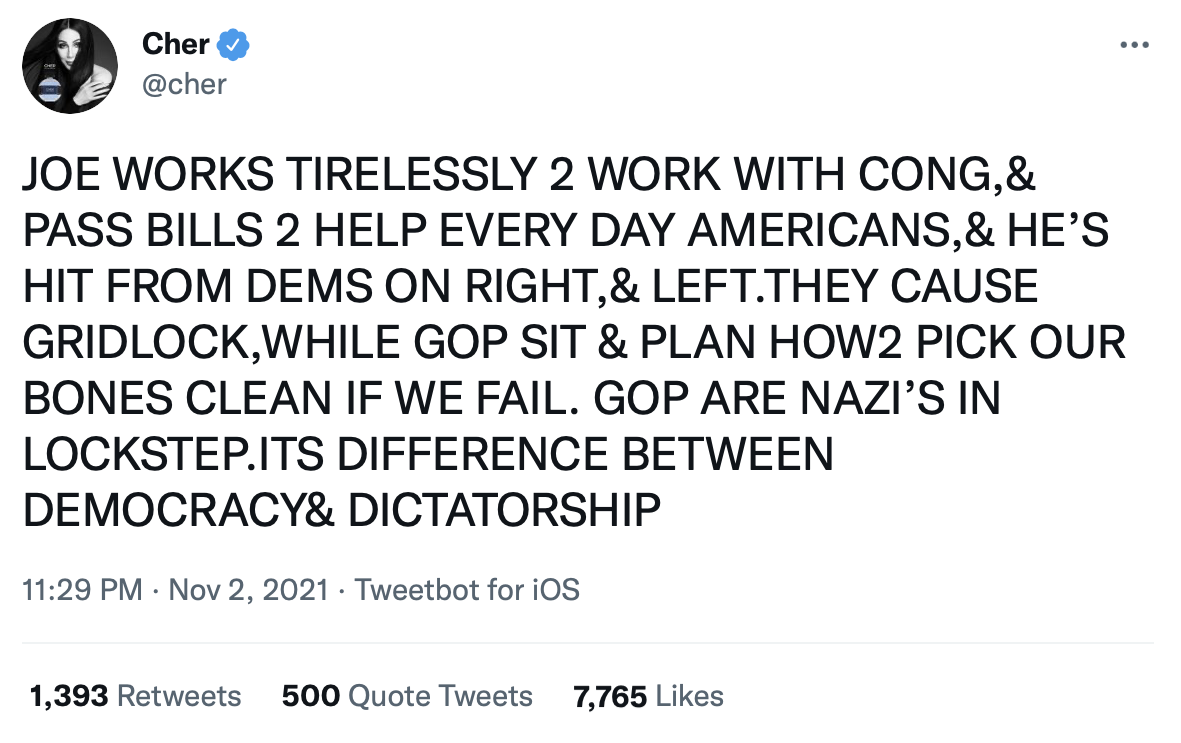 Regarding the results of the election, Disney star Josh Gad opined, “As Americans, we always seem to want to see how close to the fire we can get. I fear that if we’re not careful, eventually, we will inevitably (whether accidental or not) burn down the entire house.”

Like his peers, The West Wing actor Bradley Whitford opted to call the Republican Party racist on account of its views regarding Critical Race Theory, stating, “The GOP embraces, yet again, the racist Lee Atwater strategy, this time with their complete and utter bulls—t about Critical Race Theory.”

“To paraphrase S.A. Cosby,” he continued, “they want everyone to get over slavery while they can’t get over the fact that they lost the Civil f—ing War.” 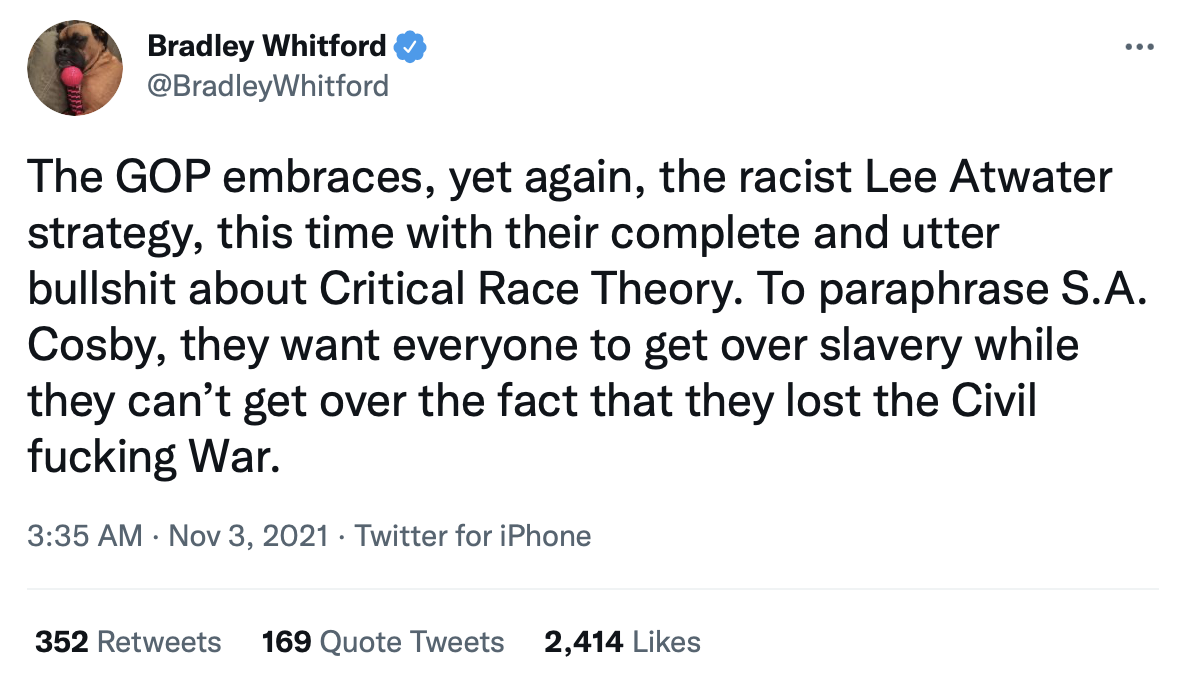 “The lesson from last night’s elections is that Americans respond to fear-mongering, demagoguery, & political activity or practices that seek support by appealing to the desires and prejudices of ordinary people rather than by using rational argument,” wrote The Wire actor Wendell Pierce. 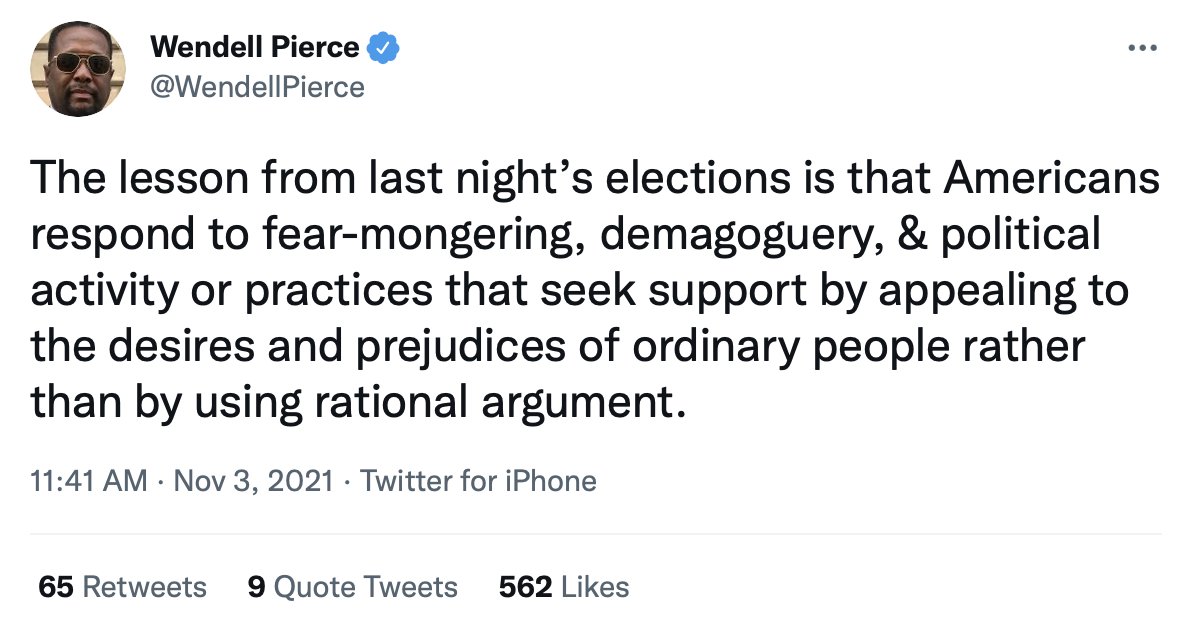 To no one’s shock or surprise, Rosanna Arquette had quite a lot to say about the election results, taking her frustrations out on both Republicans and her beloved Democrats – though eventually, albeit unsurprisingly, she blamed the loss on white supremacy.

“Frankly I’m sick of the weakness of the Democratic Party and the corrupt criminal Republican Party and the evil media who has fed the beast. Fascism is alive and well in America it’s a horror show,” wrote Arquette.

“A Wake up call for the sleepy at the wheel folks,” she wrote in another tweet.

“And there you have it it’s ALL about Racism All of it,” she later added, devoid of reason and arguments.

Continuing to rant, Arquette then played the race card once more, tweeting, “Democrats came with a soup ladle to a white supremacy Gun fight.”

“57 percent White women voted in Virgina to elect someone who will put their lives in the toilet,” she ultimately concluded.

Interestingly, the same woke Hollywood celebrities that keep loudly declaring winner of the election is racism have completely ignored the fact that Republican Winsome Sears has become the first woman of colour to be elected lieutenant governor in Virginia.

It only goes to show that left-wing activists don’t really care about the representation they so fervently promote unless said representation comes from like-minded individuals with similar political ideas and agendas.

What do you make of the reactions to Youngkin’s victory from these woke Hollywood celebrities? Let us know your thoughts in the comments section down below or on social media.