Following an incident of trash talking between Twitch affiliate Grenade Queen and a number of random Halo Infinite players, Xbox co-creator Jonathan “Seamus” Blackley has declared that such toxicity – though, unsurprisingly, only that of the kind directed towards the streamer – “needs to be highlighted and stopped.” 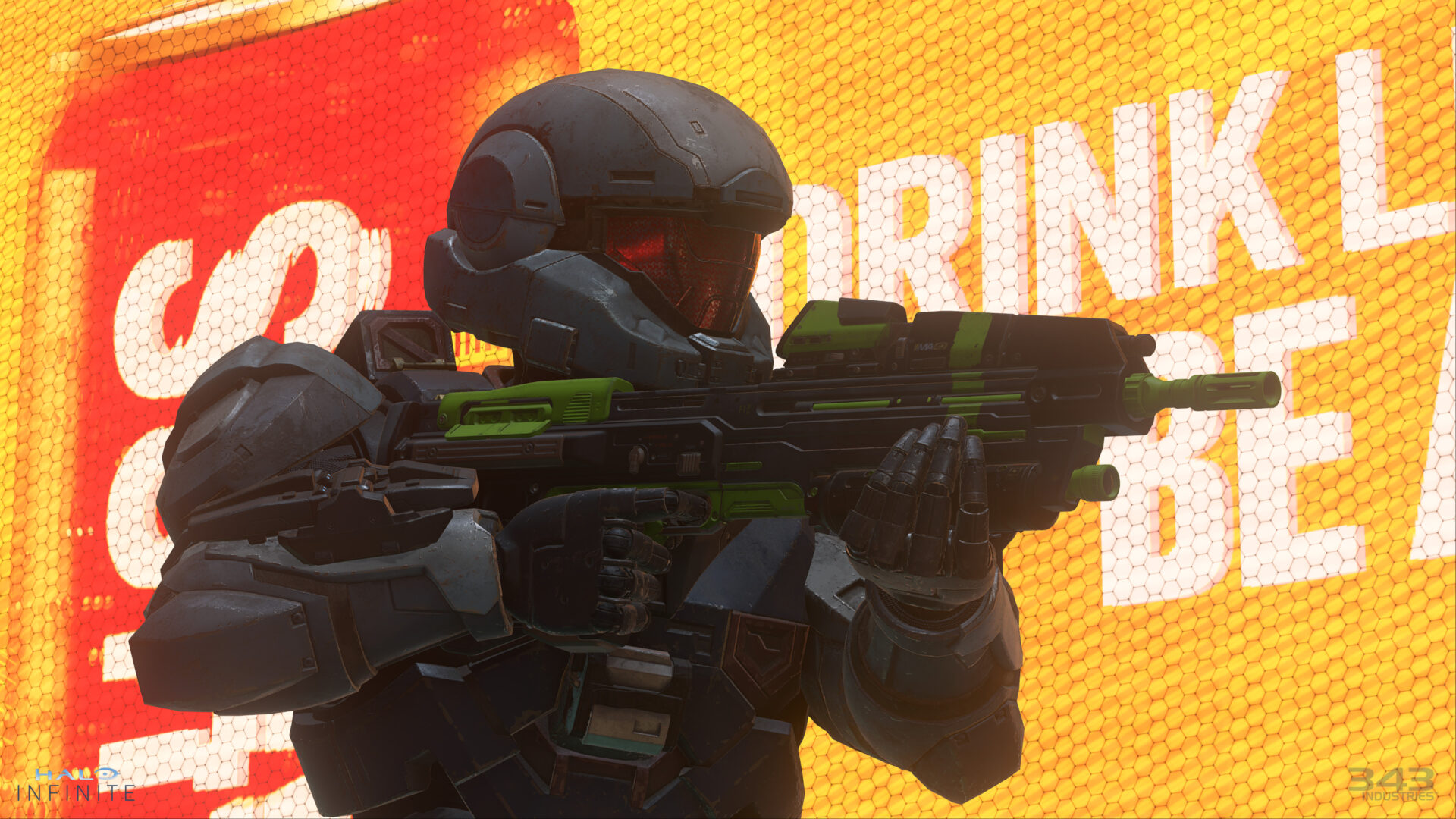 The chain of events which drew Blackley’s attention began on December 19th, when Grenade Queen entered Halo Infinite’s random queue and was teamed up with two random players who, after finding her in-game performance to be lacking, harshly urged her to quit the game altogether.

“No woman should have to deal with this if they’re having 1 rough game against decent people,” wrote Grenade Queen in accompaniment to a clip of the match posted after its conclusion. “This was only part of it.”

No woman should have to deal with this if they’re having 1 rough game against decent people.. this was only part of it (sound on) pic.twitter.com/A56x1Vs5eS

As heard in the clip, one player tells Grenade Queen during the Match to “Just f—-ing leave,” before continuing, “Go play Fortnite or whatever the f—, show your tits on f—ing Twitch, whatever. Yeah, this is not for you. You notice how Master Chief was never a woman?”

In the background, another player can be heard agreeing with the first individual, stating that she should go do “Whatever you girls do, like, play Valorant or something and get two kills. Just get the f–k off of Halo because you’re not meant to be here.” 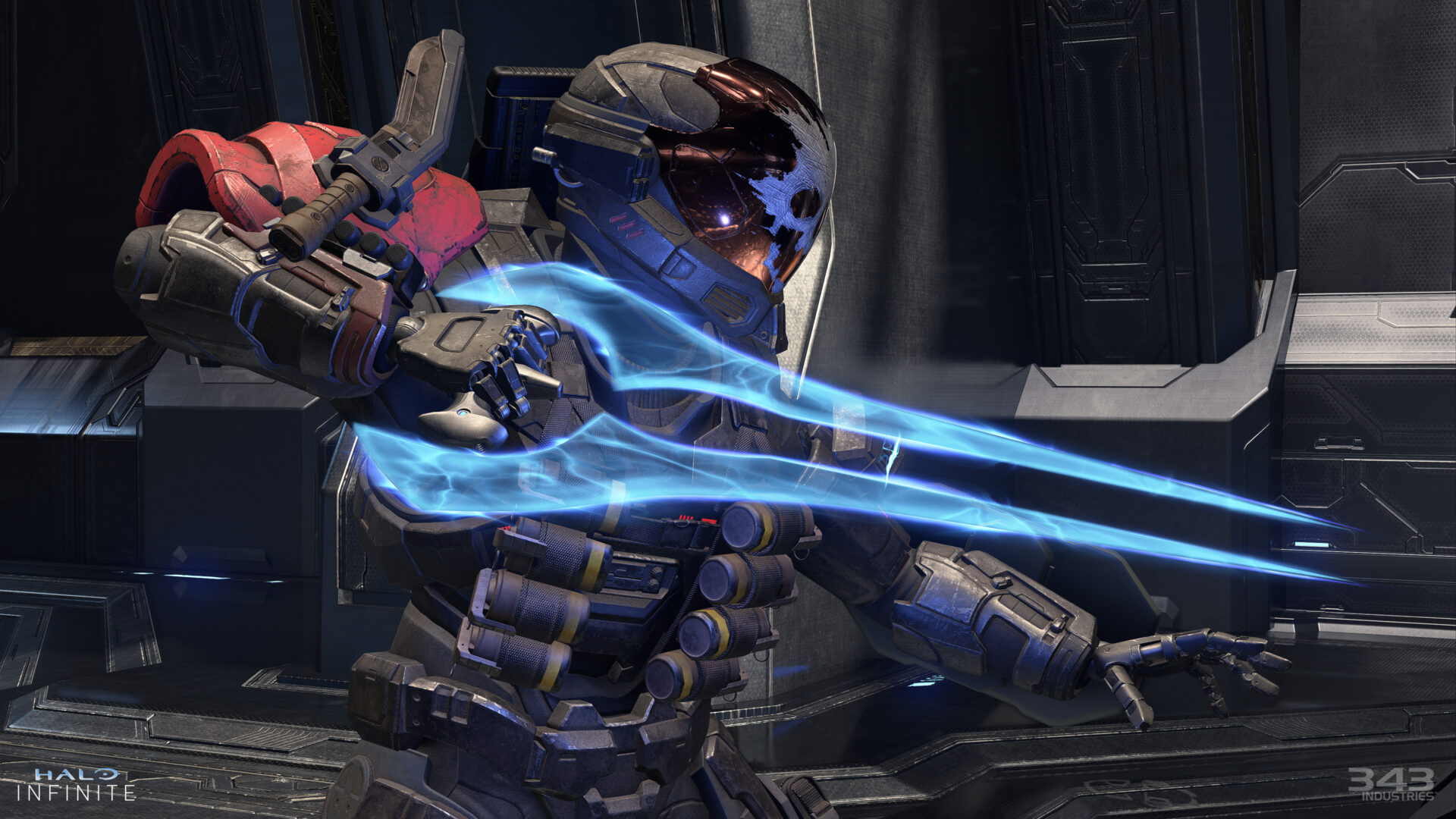 After publishing her tweet and receiving a wave of criticism from users who, in essence, told the streamer to either grow thicker skin in order to survive in the anonymous ecosystem or make proper use of various game, console, and service options in order to block or mute those she found offensive, Grenade Queen retorted on Twitter, “Let’s get one thing straight here about my post. I’m not butt hurt, I’m not crying or anything.”

Conversely, in a separate follow-up tweet addressed to her supporters, the streamer expressed her appreciation for “everyone’s kind words on the recent tweet.”

“If you’ve had this happen to you I am sincerely sorry. Kids play this game now and the fact society is different these days compared to 10 years ago, it worries me quite a bit,” said Grenade Queen.

Roughly twelve hours after making her initial post, Grenade Queen shared an Xbox Live message she allegedly received from one of the ‘toxic’ players in which they offered “an apology from us, for yesterday.”

“We took it too far, and are very sorry you were hurt by our words,” they wrote. “We do feel bad, and best of luck to you [in] life.” 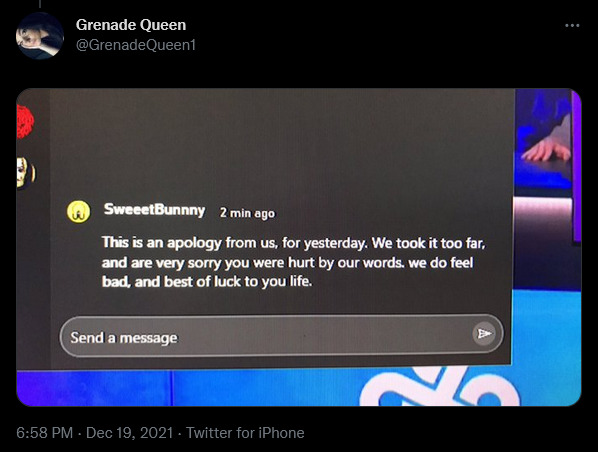 However, in a separate match, Grenade Queen met fire with fire and hypocritically trash talked her fellow players based on their gender.

“[I’m going to] piss you off even more, because you’re clearly upset,” the streamer says to another player, as heard in a clip which she has hidden every time it was posted in reply to her initial Tweet.

“You look like an idiot dude,” she continued. “I bet when you started this game, you didn’t have the greatest game either. I bet you’ve had s–y games. I bet you f—g suck. And you know what? I’m laughing at you, because your dick is SO f—ing small. And you’re probably still a virgin.”

We gonna talk about this? pic.twitter.com/QVRhhKmWxK

Taking note of Grenade Queen’s initial tweet, Blackley himself joined the conversation on December 20th, lamenting on his personal Twitter, “This wasn’t the future for Xbox live we envisioned.”

“As a community and with the help of Microsoft this needs to be highlighted and stopped,” he asserted. “It will take teamwork between players, devs, and console manufacturers to change this and it’s time. It’s past time.” 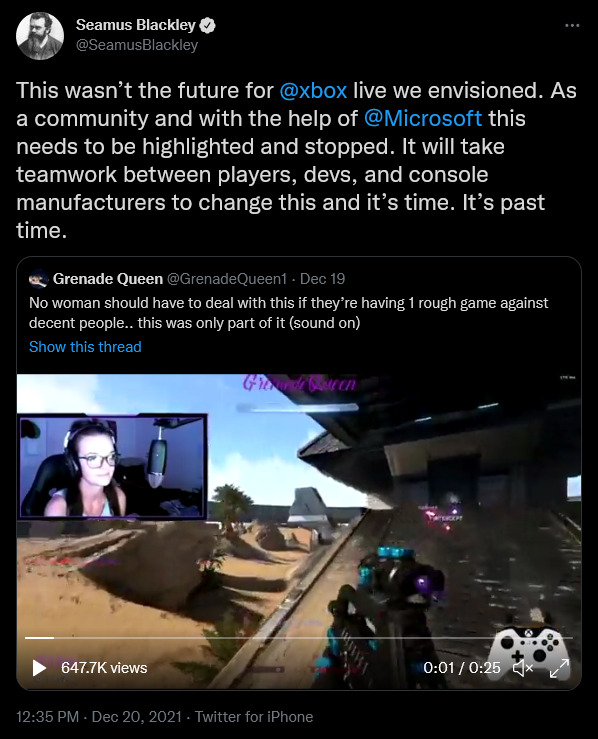 The developer told players, “I know this isn’t new. I know you’re angry because nothing has been done for a long time. You’re right. It only motivates me more. It’s possible to clean these environments up. Let’s do it.”

Blackley then outlined his vision for the future in a related discussion with Polygon co-founder Russ Pitts, who opined to the developer, “20 years of toxicity says we weren’t asking the right questions. We owe at least to be honest about that, and how ill-equipped we, specifically, were to find the answers.”

“Yes. Let’s get on it,” enthusiastically replied Blackley. “You are a person with excellent perspective, lots of knowledge and a lot of respect, including from me. What are we getting wrong. What can we encourage Xbox and Microsoft to do better. What can you and I do better.”

To this, Pitts agreed, “Yes. The first and very least we can do is acknowledge our own short-sightedness and the damage done. How celebrating XBL without questioning its toxicity enabled those who would use it for ill. Not just our ignorance, but our complicity.”

“Agreed,” said Blackley as the conversation slowly skimmed ever closer to becoming an echo chamber before suggesting that the company abandon its currently existing player base in favor of a potentially wider audience.

“We acknowledge that it’s an abusive place and that changes need to happen. Xbox and Microsoft can help hugely by deciding that it’s going to be more profitable and create more value to address it now and grow the audience than to ignore it and milk the current crowd,” Blackley asserted. 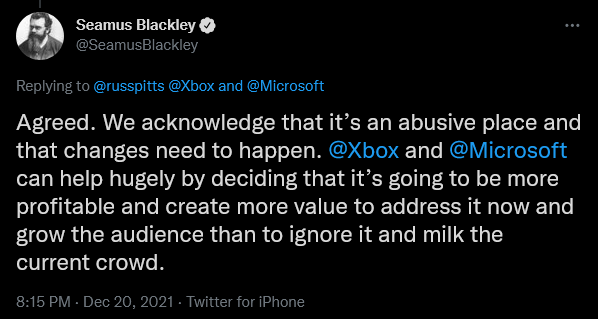 Unsurprisingly finding himself once again whole-heartedly in support of Blackley’s ideas, Pitts noted, “Yes. Ultimately, though, I feel that positive examples are all that will change behavior. Men shutting down misogyny when they see or hear it,”

He went on to ask, “How do we encourage self-policing among the community?”

“We can award achievements,” speculated Blackley. “We can encourage women and POC to positions of authority in moderation, across platforms and publishers.”

Bouncing off of this idea, Pitts stated that “an initiative to empower women and POC to enable self-policing on XBL would be a HUGE start. Also empowering women, POC and at-risk communities to tell us what next steps would be useful and valuable. A Blue Ribbon committee as it were.”

“Listen, Xbox. Russ knows what he’s talking about,” Blackley concluded. “He’s covered this business for… um… longer than we will admit to.”

What do you make of the situation surrounding Grenade Queen and Blackley’s subsequent response to it? Let us know your thoughts on social media or in the comments down below!