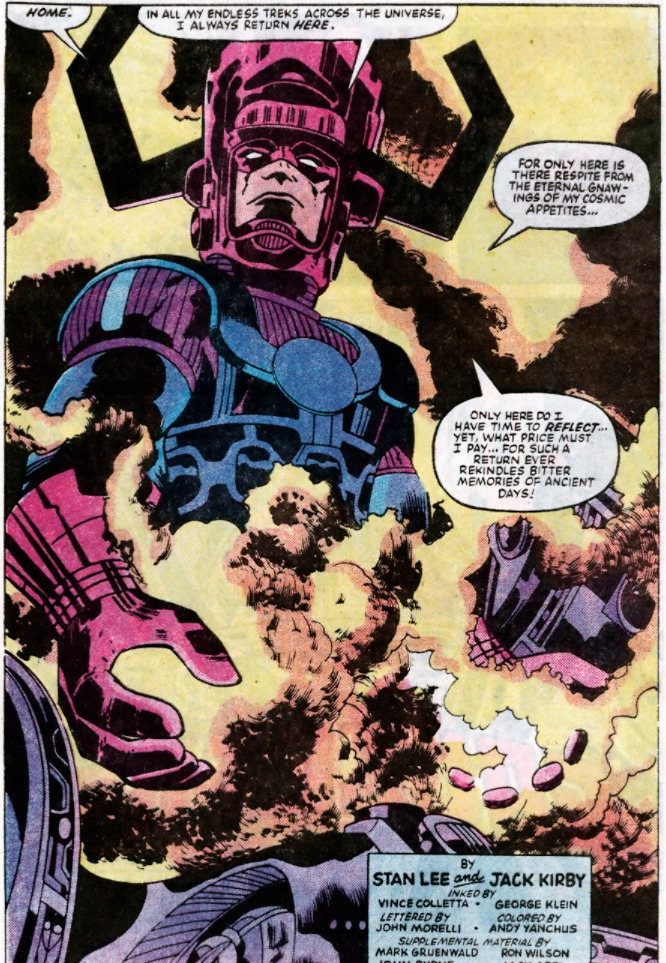 Twitter user J Hammond shared a screenshot from the first movie when The Collector is discussing the Power Stone alongside two panels from Stan Lee and Jack Kirby’s Supervillain Classics Vol. 1 that was subsequently reprinted in The Origin of Galactus.

The user asked Gunn, “Is this the birth of Galactus?!” 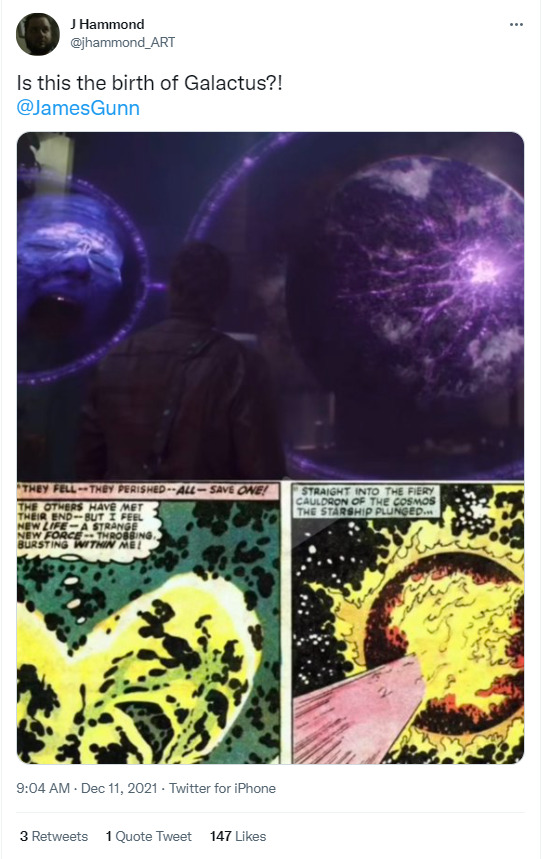 Gunn would respond writing, “No. Marvel didn’t have the rights to Galactus in 2014.” 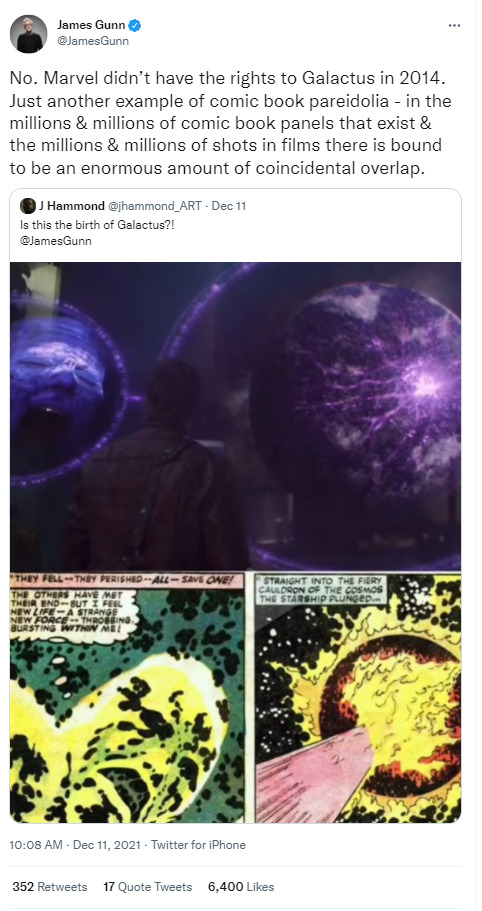 In a subsequent tweet, Gunn responded to another user who asked, “Weren’t rights swapped, where FOX had Ego the Living Planet and Marvel had Negasonic Teenage Warhead, and they traded? Heard that one time.”

Gunn answered, “Yes that’s essentially true. If I recall correctly, Fox wanted TNW to be able to use her powers, which were partially owned by Marvel (these things are complex), & they let us use Ego in return… not knowing I had already made him the antagonist in Guardians of the Galaxy Vol. 2.” 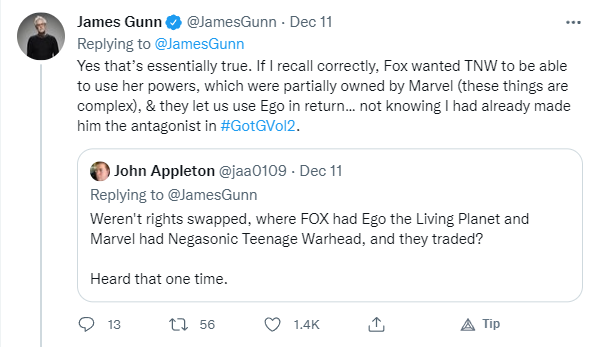 Gunn would go on to discuss the inclusion of Ego the Living Planet as the primary antagonist in Guardians of the Galaxy despite Marvel Studios not having the rights to the character.

He explained to one user, “I was told we owned the character, which was a mistake. I didn’t find out we didn’t have the rights to the character until after the deal was made. Thank God because he was deeply imbedded in the script.” 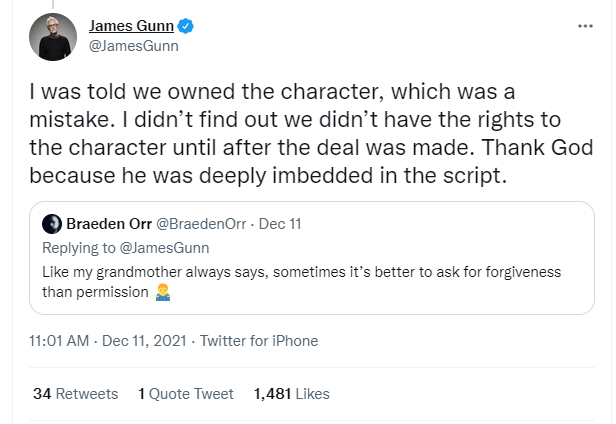 Gunn went on to reveal he didn’t have a contingency plan if the deal to acquire the rights to Ego didn’t go through.

He said, “I didn’t because I had no idea the rights were an issue. Had it changed before I started writing I could have figured out something else – but this was weeks before production.”

Gunn added, “I think David Ayer knows how hard it can be to change an antagonist right before shooting!” 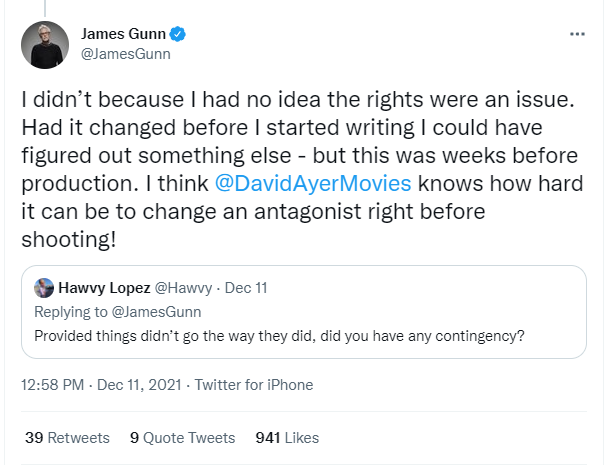 Ayer would chime in at this point stating, “Yep. Better to take the time and not back into a release. This hits the big issue of IP – who really owns it, chain of title, and it get’s really complex with old publishers and estates.”

“There are even Hollywood ‘patent trolls’ who jump on IP in obscure ways and gum the works,” he detailed. 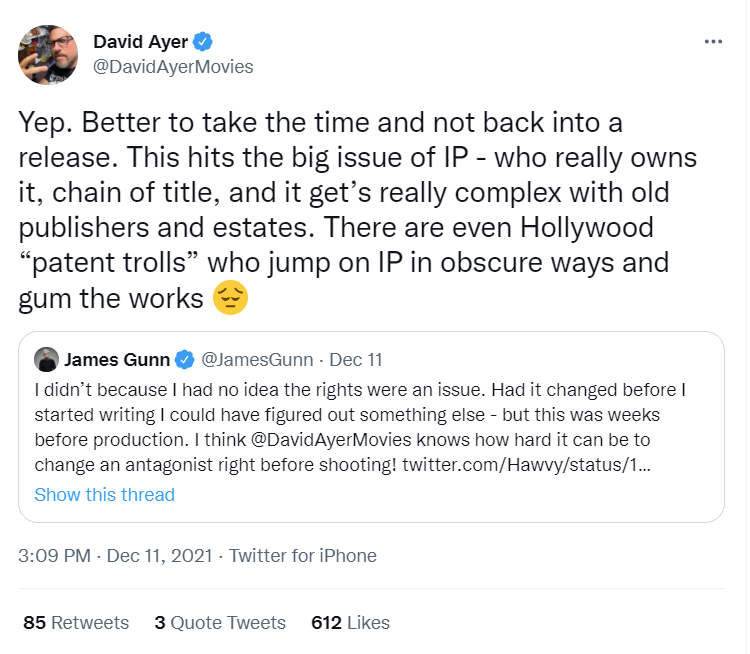 Gunn would return to the original post in response to a comment from Lucasfilm Creative Art Manager Phil Szostak who tweeted, “This is one of my biggest pet peeves: when two similar art or film images are posted side-by-side, implying that one definitely inspired (or worse, ripped off) the other.”

“Lest we forget that our brains are pattern-seeking machines and will find them, even where they don’t exist,” he stated. 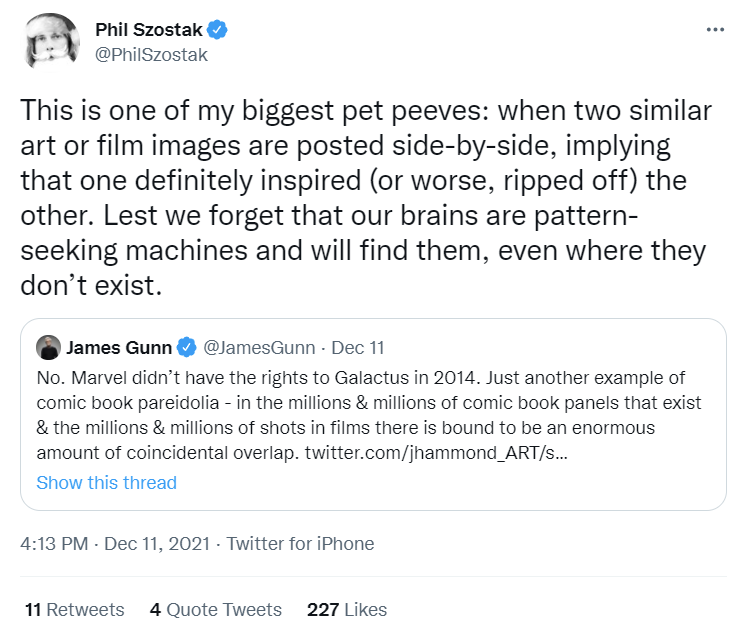 Gunn replied, “Every day someone posts a shot from my film next to a comic panel or still from another film & says – the harmless version: cool how this inspired you! – or the irksome version: you ripped this off!” 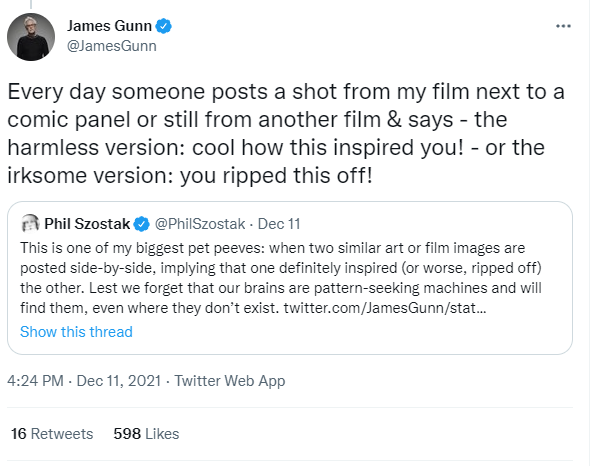 He followed that up tweeting, “I’ve purposefully given visual homage to another artwork or film only a handful of times in my entire career. Maybe I’ve done it once or twice subconsciously. The rest – most – are coincidences.”

What do you make of Gunn’s comments about the rights surrounding Ego the Living Planet and his claim that most of his visual homages are merely coincidences?

NEXT: Peacemaker Showrunner James Gunn Reveals He Once Tried To Make A Gilligan’s Island Movie With A Dark Twist