The Faraway Paladin writer Kanata Yanagino has responded to Anime News Network’s recent review of his series as “a poor man’s Mushoku Tensei: Jobless Reincarnation” by clarifying that, while he absolutely took influence from the fellow isekai show, he took offense to the suggestion that he outright copied it. 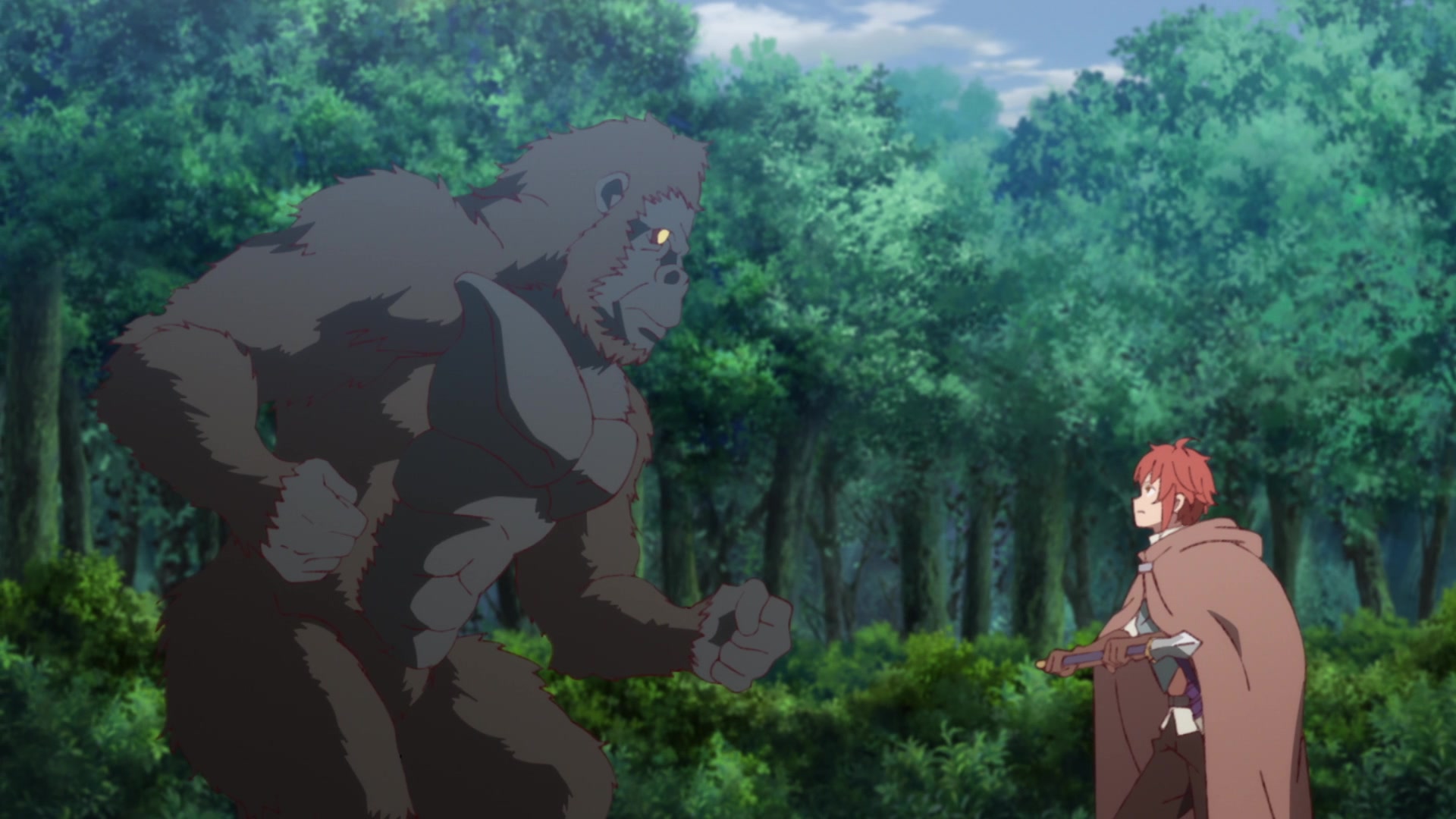 ANN leveled their comparison between the two in their December 23rd entry of the site’s weekly This Week In Anime column during a discussion of the question, “Is The Faraway Paladin Worth Watching?”, held between site contributors Nicholas Dupree and Jean-Karlo Lemus.

Dismayed at the idea of watching another isekai, site contributor Lemus opened the column by describing the series’ basic premise: “NEET dies, gets resurrected. He was a sadsack in our world, he’s a prodigy in a fantasy world. You know the drill.”

“But hey, let’s look on the bright side. This one DOESN’T star a sex criminal!” exclaimed Dupree in response. “Can’t believe that’s an effective qualifier now, but I’ll take small mercies where I can.” 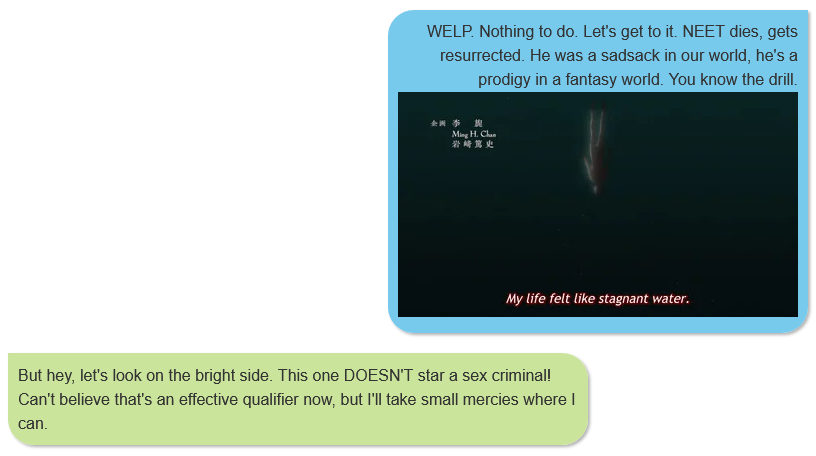 In turn, Lemus opined, “Yeah. Full offense to isekai as a genre, but Faraway Paladin is basically a poor man’s Jobless Reincarnation only the protagonist wasn’t a total creep.”

“Turns out, when you take the perv-angle out of Jobless Reincarnation,” he added, “you’re left with a really boring show, as opposed to a boring show with a gross protagonist.”

“Eh, I’m gonna have to disagree pretty hard there,” countered Dupree. “Faraway Paladin is not an amazing piece of work, and it’s hampered by some major production woes that keep it diminished as an anime, but will absolutely take this meek, sheltered Christian boy and his undead parents over the literal sex offender.” 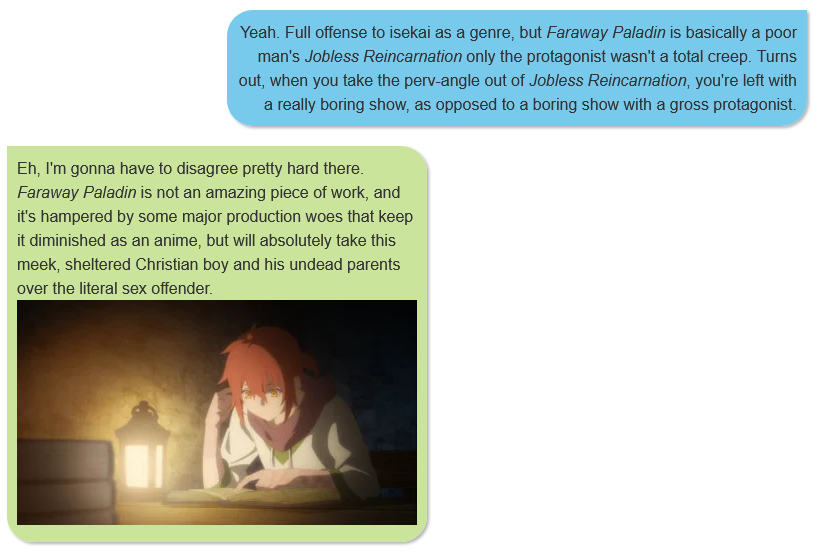 Ultimately, Lemus concluded, “this stuff is some unmemorable fantasy,” whilst Dupree maintained, “This show is far from amazing, but I did enjoy my time with it”. 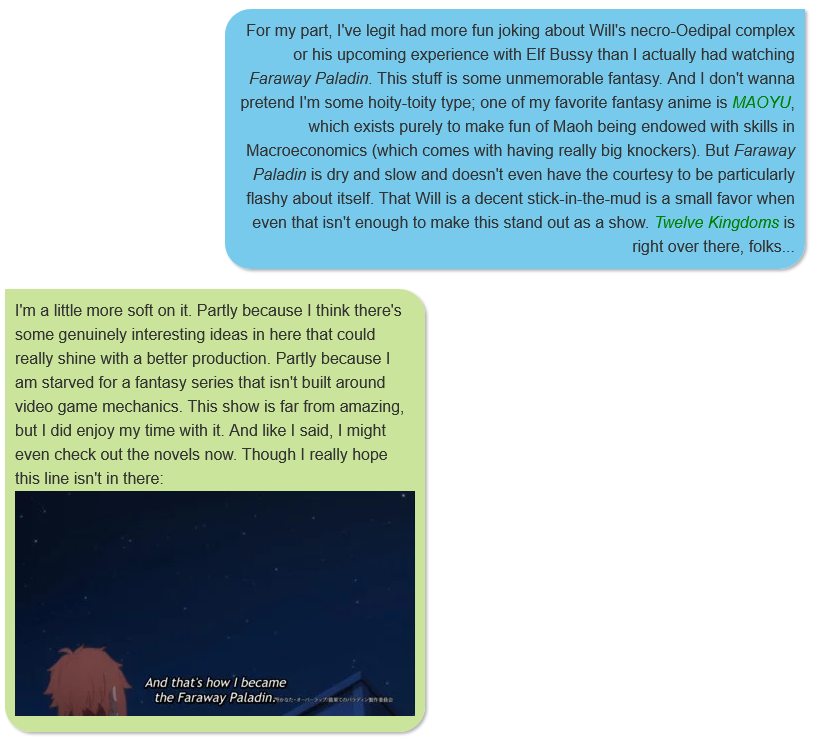 Following the review’s publication, it caught the attention of Yanagino, who took to his personal Twitter to refute the pair’s above comparison.

“That’s a pretty frank review,” he laughed. “By the way, I am a follower of ‘Mushoku’, which I started writing under the influence of this work.”

He continued, “Since the anime aired at the same time, I think the comparison is inevitable. But let’s make that point clear.” 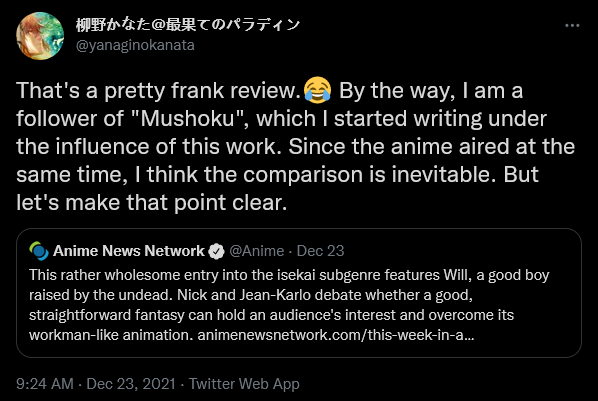 The author added, “You are free to critique which one you like better or which one you don’t like. That being said, let me just say that my respect for ‘Mushoku’ is unwavering.”

“I don’t want to get in trouble with a work I admire,” he further explained. “If you see someone who loves ‘Mushoku’ and is sick of comparing the works, show them this tweet of mine.”

Yanagino then linked to his own interview with ANN Japan Correspondent Kim Morrissy, published just days earlier on December 13th, in which he “talked about the influence of my work on ‘Mushoku’”

“If you want to know, read it,” he asserted. 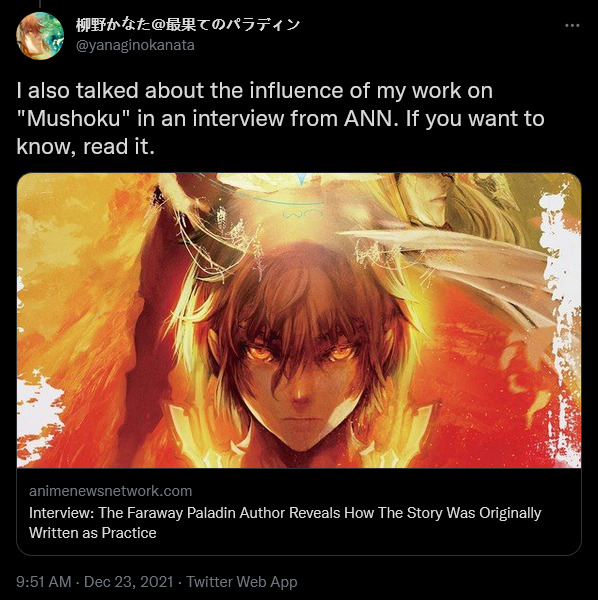 Asked during said interview why he chose to gives series protagonist Will “humble ambitions” focused on “family as a theme” rather than send him off on “an epic adventure,” Yanagino told Morrissy, “I’m no valorous hero, however, so I sought a small-scale theme.” 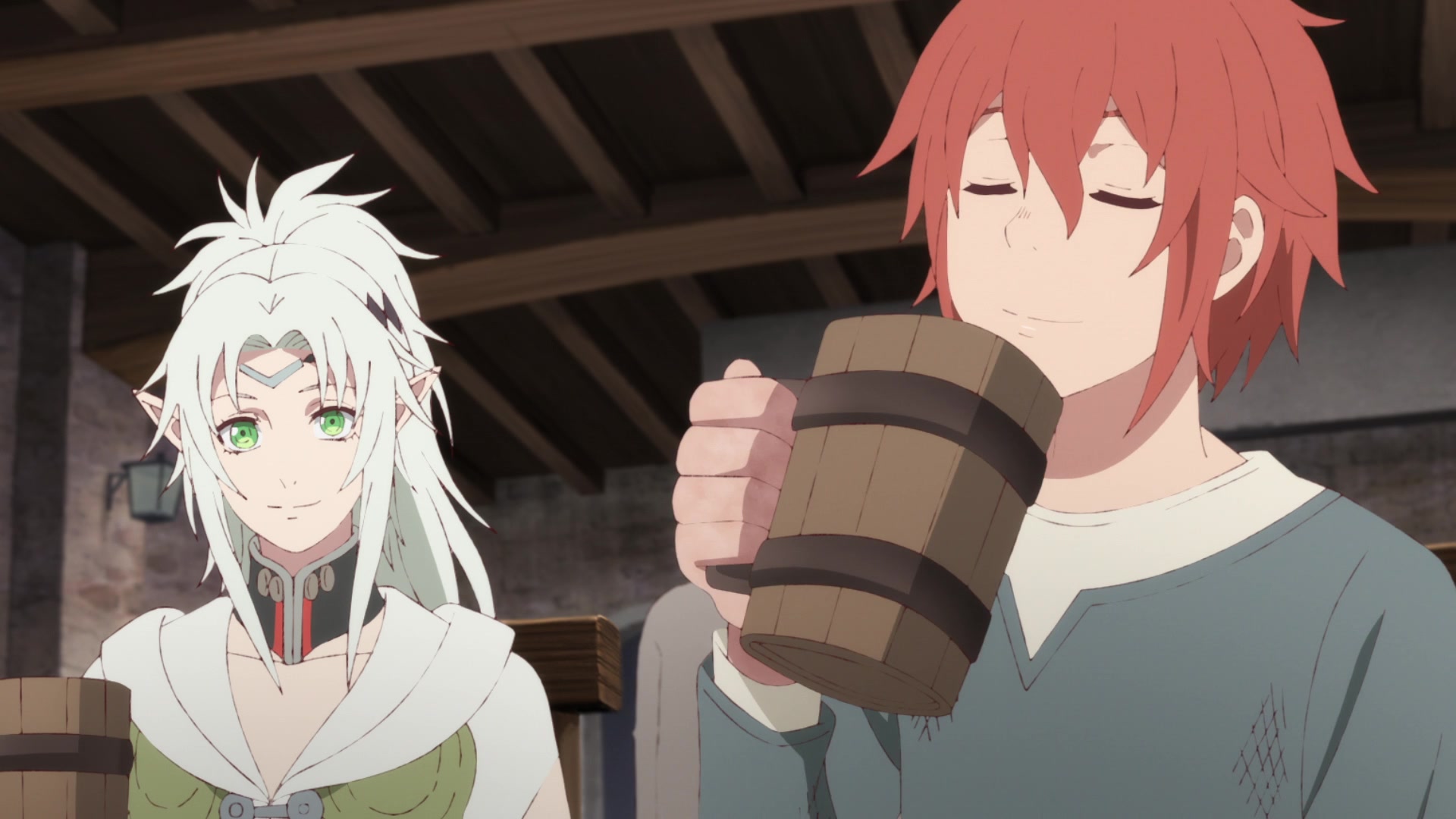 “Something perfectly suitable for a single-length book,” he said. “As I wracked my head on what that could be, Mushoku Tensei came to mind. At the time, it was massively popular on the site that I intended to post my practice piece on. It’s a story with a family theme about the long life of a man named Rudeus, who has been reborn into another world. I, too, was a huge fan of that novel. Living life for the second time, loving one’s family—I thought it was a really great theme.”

“Of course, plagiarism is a terrible idea,” he recognized. “So I only took inspiration from the theme and made sure to write a story that was entirely in my own style. That was the beginning of The Faraway Paladin. I will never forget that this was my starting point.” 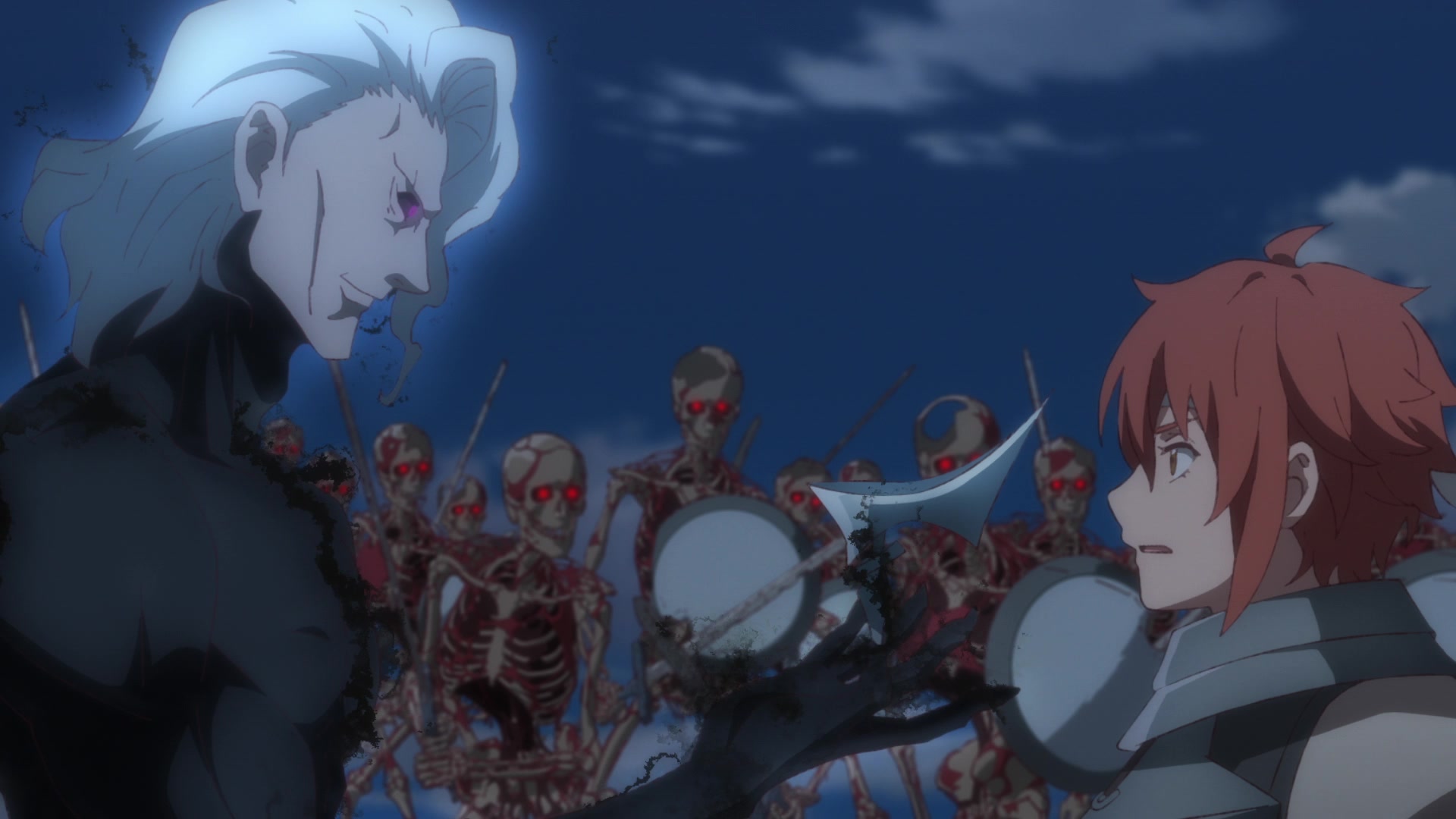 Eventually, after thanking English-speaking fans for their outpouring of support, Yanagino clarified, “I’d like to make one thing clear, I’m not trying to complain about this review, nor am I trying to fight ANN.”

“I simply want people to know that there is nothing but respect between me and ‘Mushoku’”, that’s all,” he concluded. “There are no enemies anywhere.”

What do you make of Yanagino’s response to ANN? Let us know your thoughts on social media or in the comments down below!

NEXT: Crunchyroll Announces 5 New Series Arriving On The Streaming Platform