A new rumor claims that Marvel’s upcoming Black Panther: Wakanda Forever will see Okoye, the head of the formerly-secretive African nation’s armed forces, enter into a lesbian relationship with a fellow member of the Dora Milaje.

The suggestion of this possibility comes from noted film scooper DanielRPK, via Twitter fan the appropriately named Black Panther News fans account, who reportedly shared to with his Patreon subscribers, “Okoye will have a same-sex relationship another Dora Milaje in Black Panther: Wakanda Forever!” 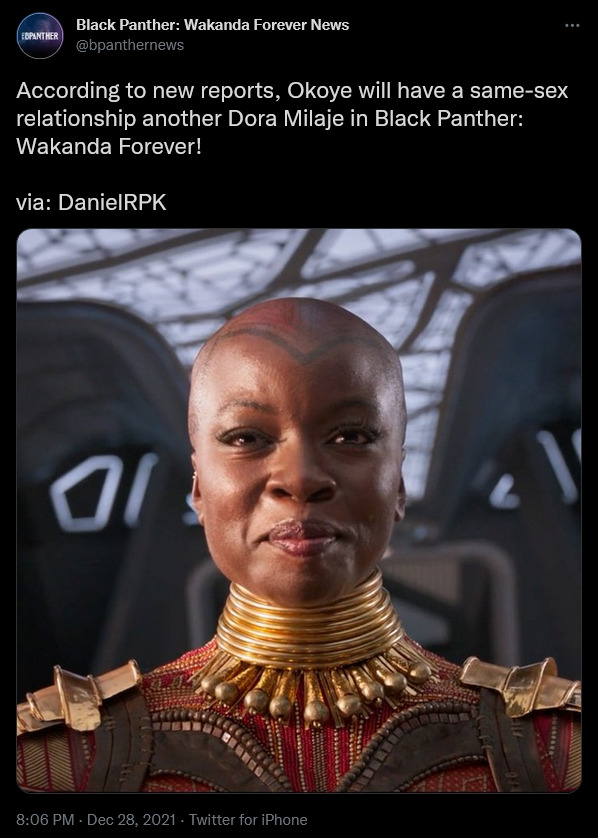 If true, Okoye’s new relationship would stand as yet another sexuality-swap – or at the least, an after-the-fact reveal of bisexuality – in the MCU, though this time, surprisingly, happening within the same universe, rather than in the jump from comic book page to silver screen.

As seen in the first Black Panther movie, at the time of Killmonger’s attack on Wakanda, Okoyoe was married to T’Challa’s best friend, the male W’Kabi.

Though the two found themselves on opposing sides during the film’s climax and W’Kabi eventually surrendered to and was subsequently arrested by Okoyoe, there has as of yet been no explicit confirmation that their relationship has ended.

However, identity-obsessed fans latched onto the possibility of her being LGBT in 2018 when word began circulating of a deleted scene from Black Panther, seen only by a relatively small group of journalists, in which Okoye can apparently be seen flirting with fellow Dora Milaje member Ayo, as portrayed by Florence Kasumba.

“In the rough cut of this Black Panther scene, we see Gurira’s Okoye and Kasumba’s Ayo swaying rhythmically back in formation with the rest of their team,” wrote Vanity Fair’s Joanna Robinson after seeing the early footage in 2018. “Okoye eyes Ayo flirtatiously for a long time as the camera pans in on them. Eventually, she says, appreciatively and appraisingly, ‘You look good.’ Ayo responds in kind. Okoye grins and replies, ‘I know.’”

The potential was further reinforced by Black Panther co-writer Joe Robert Cole, who when asked during an interview with Screen Crush if the film was intended to have a “queer love story”, Cole replied, “I think the short answer is yes.”

“I know that it was not – there wasn’t some major theme through that we were looking to explore with that in terms of the story,” he clarified. “We didn’t like, pull out a full thread of some theme. But your friend quite possibly could be right, or I’m maybe having a brain fart here and just can’t remember.”

Additionally, while many pointed to the romantic relationship between Okoye and Ayo in Ta-Nehesi Coates’ recent World of Wakanda as inspiration for and proof of the General being a lesbian, this was far from the case.

Aafter Robinson’s recap of the scene began to make the rounds, Marvel issued a statement to Vanity Fair confirming that “the nature of the relationship between Danai Gurira’s Okoye and Florence Kasumba‘s Ayo in Black Panther is not a romantic one and that specific love storyline from the comic World of Wakanda was not used as a source.” 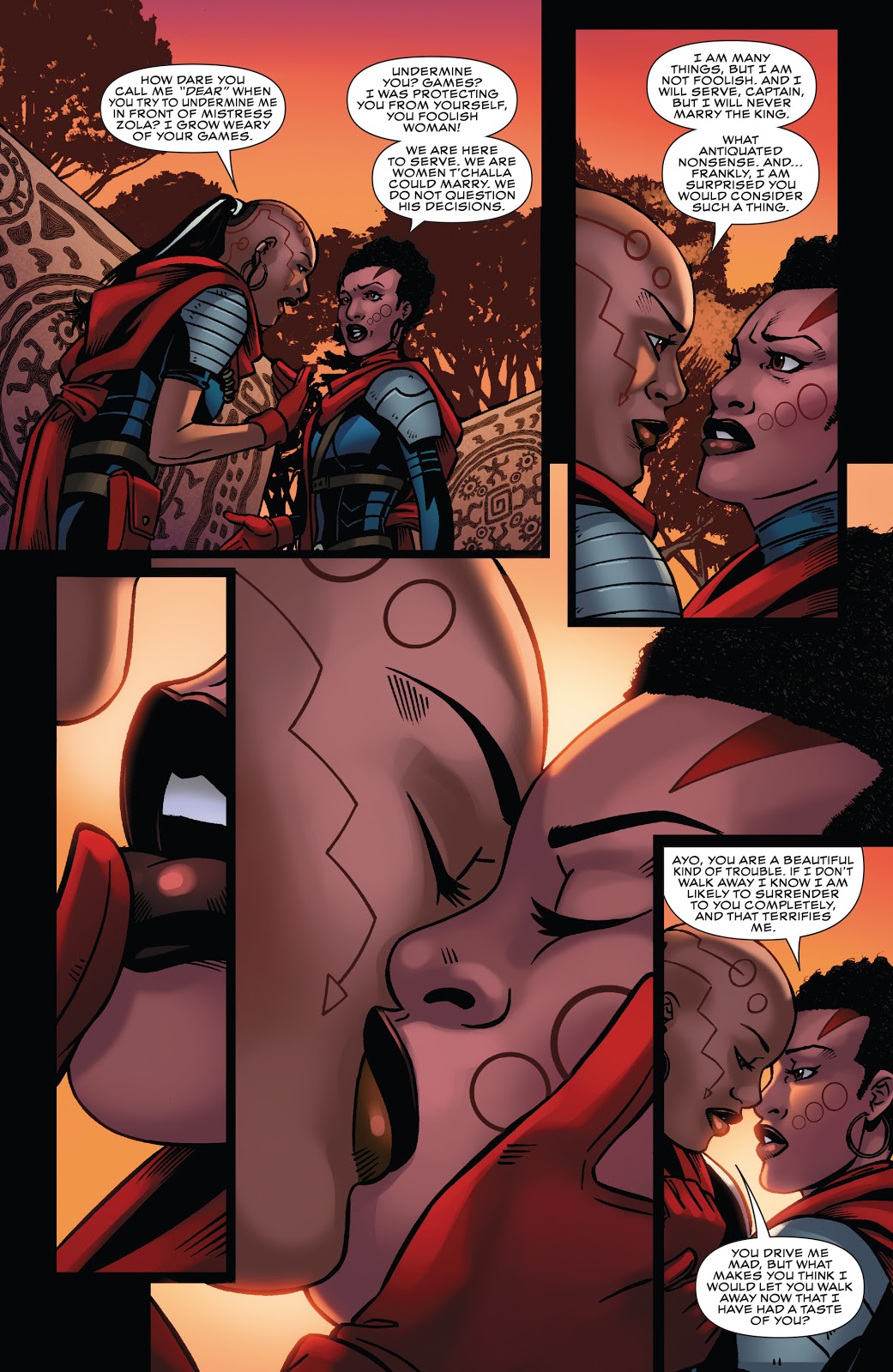 Further, while many cite Coates’ series as proof that Okoye being bisexual or lesbian would be comic accurate, her interest in women was only made evident following her 2018 return to relevance in comics canon.

In fact, upon her introduction in Black Panther Vol. 2 #1 (1998), it was established that Okoyoe – and the Dora Milaje as a whole – willingly entered into service under T’Challa under the understanding that they were, essentially, “wives-in-training” for the Wakandan ruler. 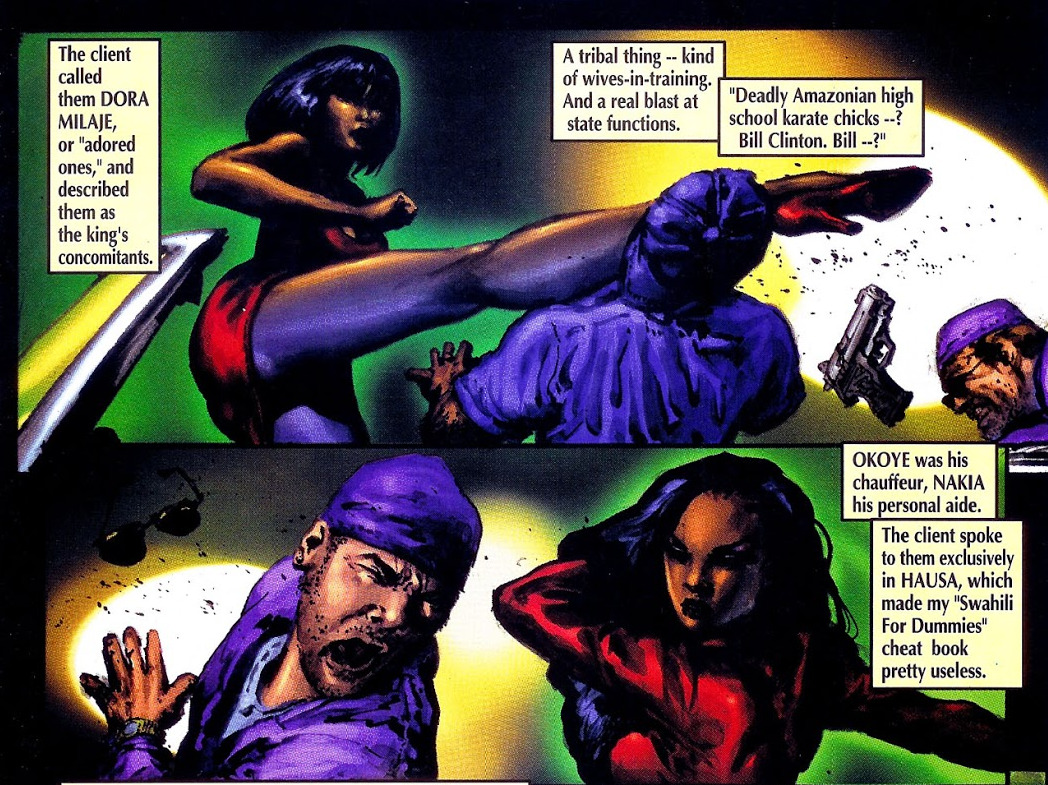 What do you make of Okoye potentially being in a lesbian relationship when she returns to the silver screen next year? Let us know your thoughts on social media or in the comments down below!

NEXT: Black Panther Actress Letitia Wright Addresses Rumors About Her Stance On Vaccines