The Pokémon Company’s newly released animated short, Bidoof’s Big Stand, might be some of their best work in a long time. 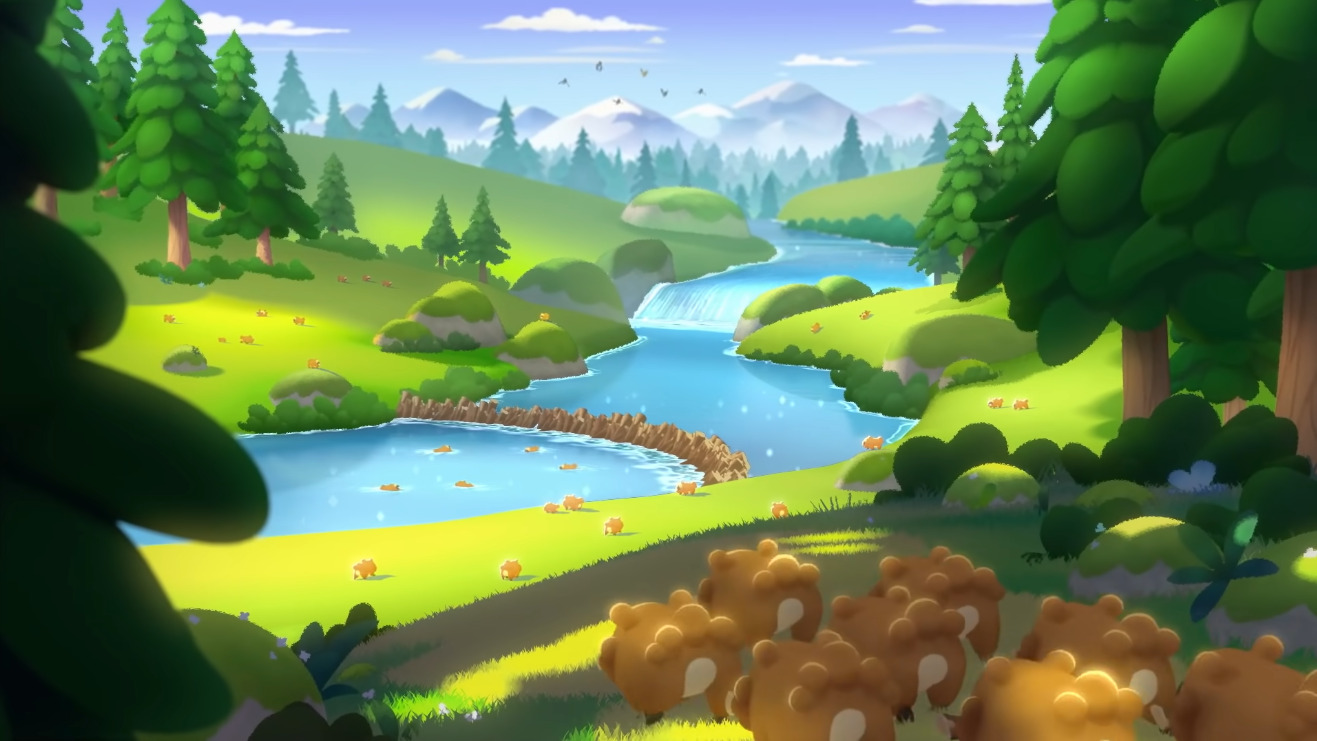 Related: Leaker Claims Pokémon Legends: Arceus Will Have No Held Items, Breeding, or Abilities, Stats To Be Improved Via Candy

As mentioned in our coverage of alleged Pokémon Legends: Arceus leaks, some fans have been vocal about their dissatisfaction with the games and brand as a whole ever since the mainline games went fully 3D with X and Y.

Despite the franchise making over $100 billion in life-time sales across various mediums and merchandise and standing as the most valuable media franchise, recent entries in the series have been criticized for removed features, cut Pokémon, poor graphical and animation quality, and a general lack of challenge (even for an RPG series aimed somewhat primarily at kids). 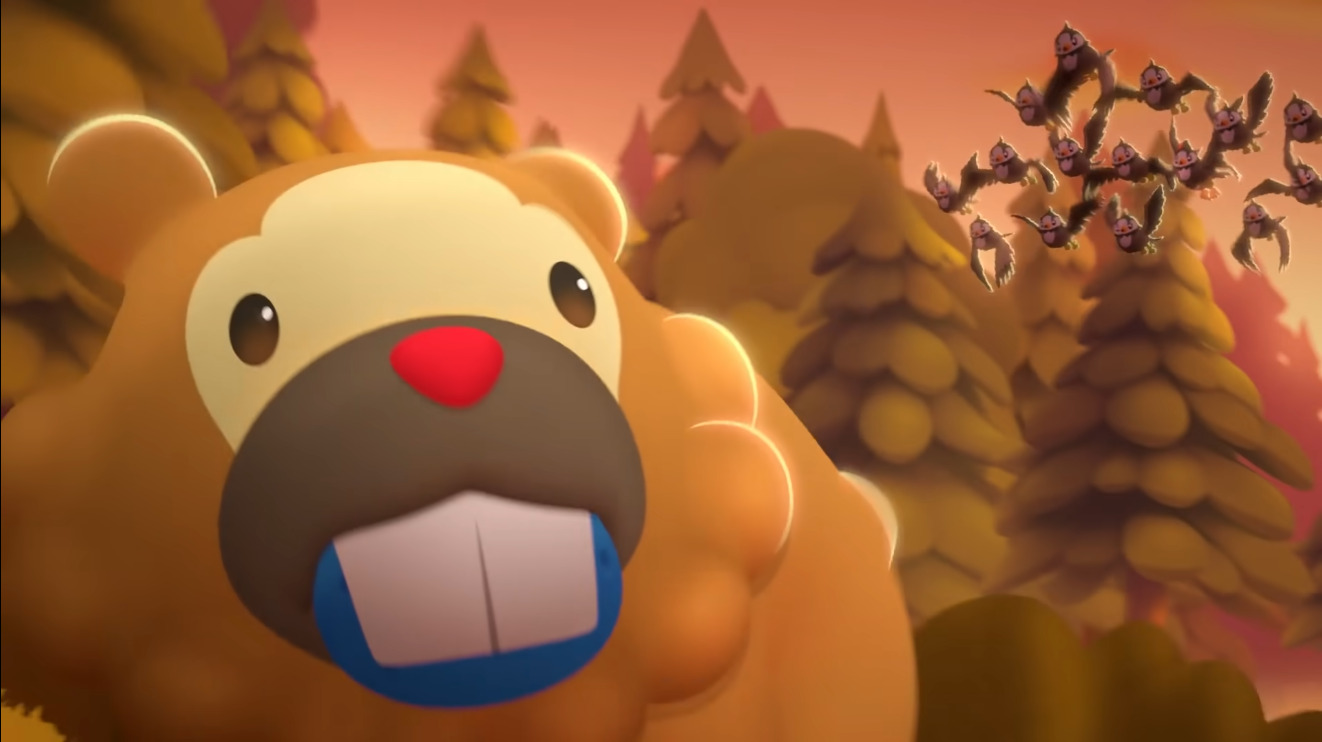 Overall, there’s been a general sense among some fans that, no matter what is produced, The Pokémon Company knows they’re always going to sell millions and are thus happy to dumb down their product as old fans cycle out for the new.

Admittedly, The Pokémon Company has done little to quell this rage, with their director of consumer marketing, J.C. Smith, even telling Axios, “We have a group of creators and professionals working at the Pokémon Company that have been through a lot — seen, heard [a lot]. They have thicker skin than many people do because they’ve heard it.” 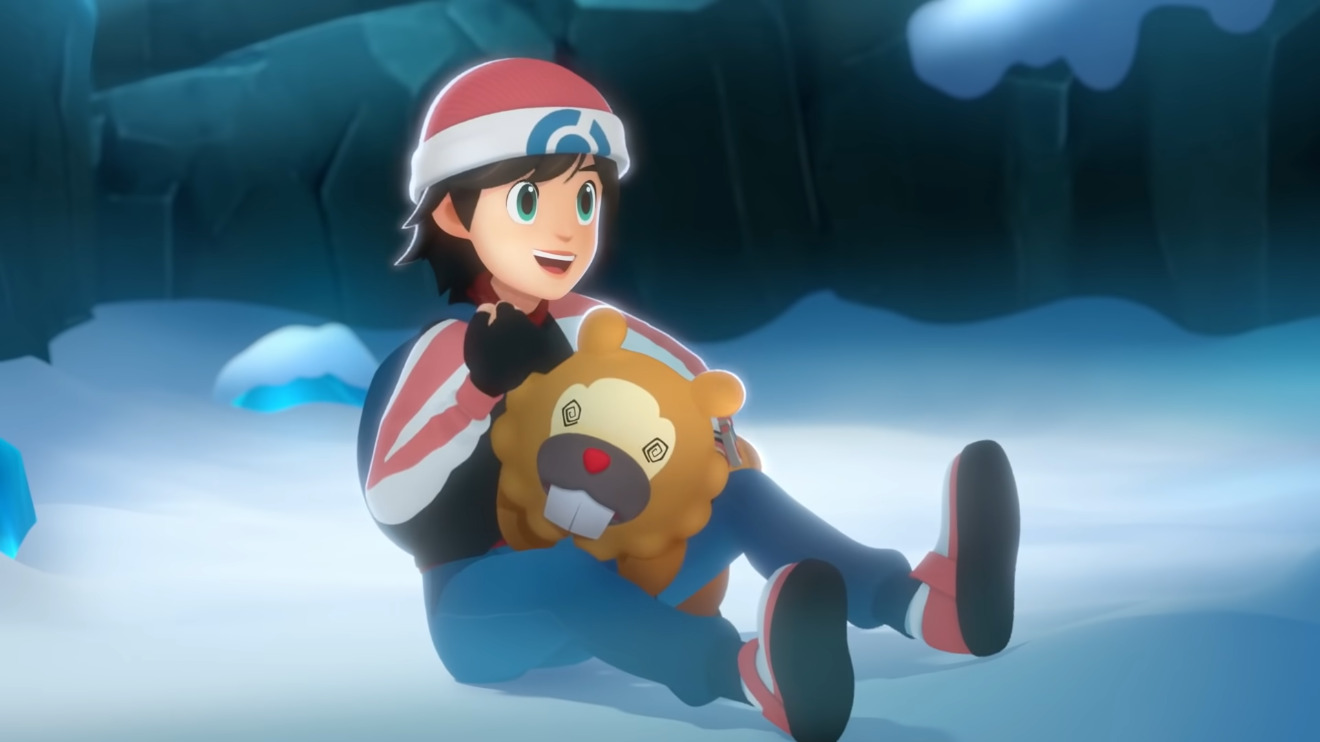 Admittedly, the problems facing the Pokémon brand are the same suffered by many other ‘mega-brands’: they’ve become so big that their products will nigh-always turn a profit, but at the expense of needing to drastically cut costs while attempting to meet deadlines without delays. The investor becomes the customer, and the fan the product.

Yet, even the jaded heart of this former fan was melted by this animated short about a little beaver. 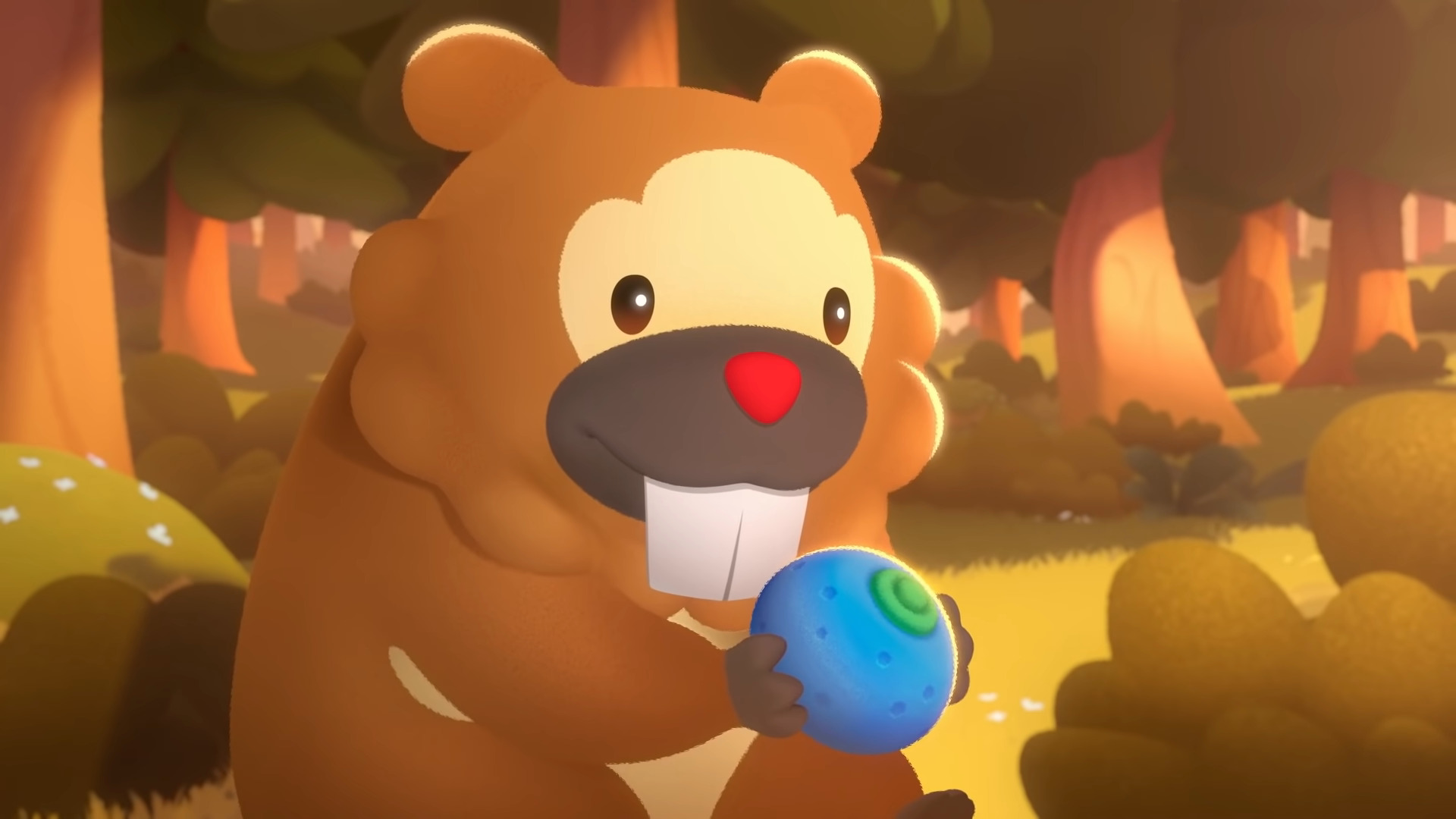 Aside from the still ongoing anime, the Pokémon company have produced other animation shorts on YouTube.

We’ve seen mini-series such as Pokémon Origins, Pokémon Generations, Pokémon: Twilight Wings, and Pokémon: Evolutions, a music video, numerous shorts in varying art-styles [1, 2, 3, 4, 5, 6], and even a handful of ASMR videos [1, 2, 3] 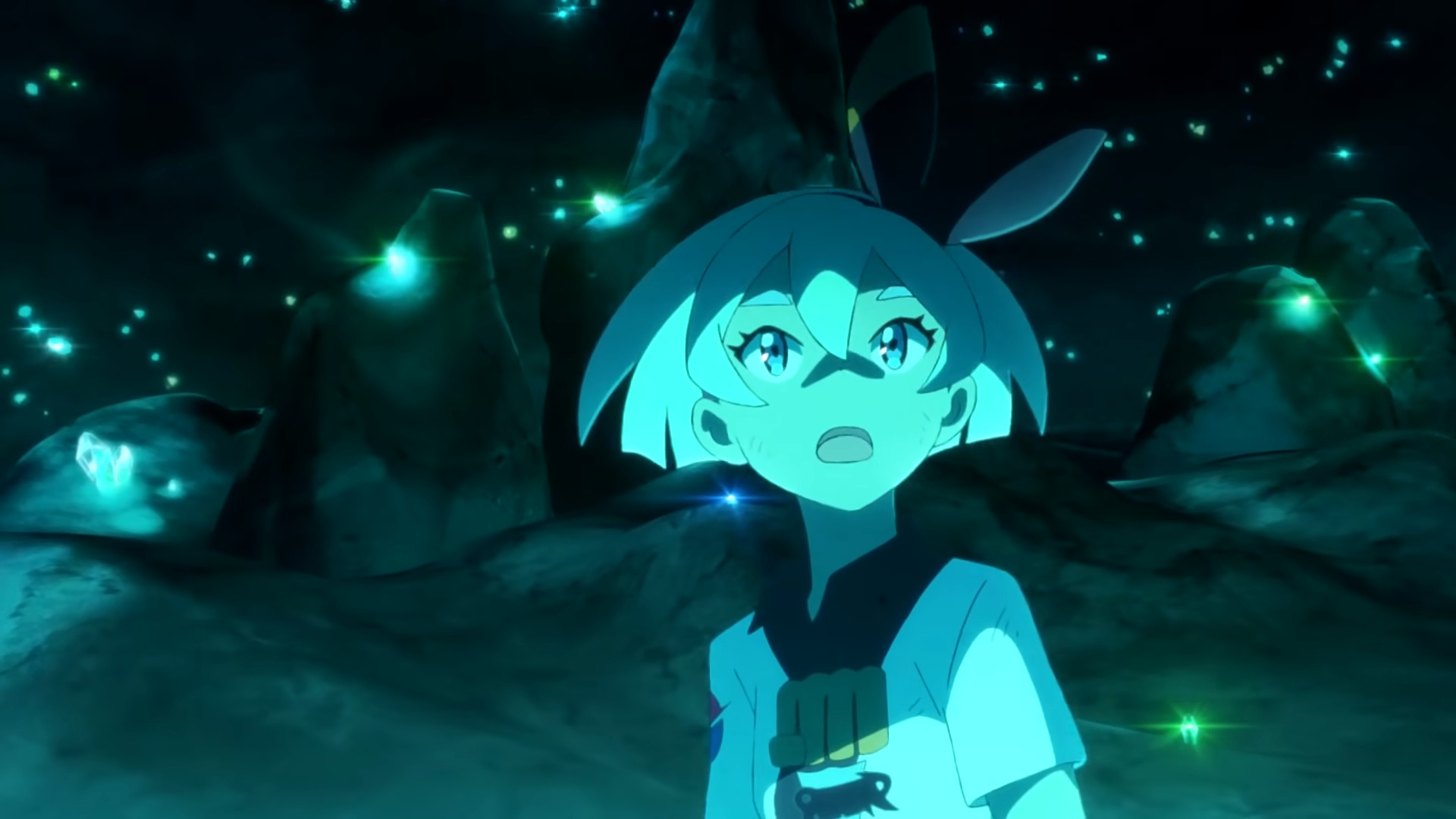 While these are usually released in promotion of an upcoming game, Bidoof’s Big Stand is actually a belated short that was originally intended to release on July 1st – or, Bidoof Day, as the official Pokémon YouTube announced last year by Rick Rolling the internet.

“So…we know you’re wondering—why this, why now? #BidoofDay was months ago!” the official Pokémon Twitter stated upon the short’s January 11th premiere. “We humbly ask in return—why not? If not now, when? Bidoofery need not be contained to a single day, Trainers.”

“Okay, so… the truth is, we had some scheduling issues,” the account then admitted. “You see, Bidoof wanted to have this ready for #BidoofDay, but…it got the date wrong. Then, when Bidoof tried to deliver us this incredible epic for the holidays…it got those dates wrong too.”

They further asked fans, “Please don’t blame Bidoof! It was just awfully busy cutting trees, smashing rocks, and surfing the waves. We promise it’s worth the wait! And besides, every day can be #BidoofDay if you want it to be…Anyway, please enjoy this animated short made with much love and even more Bidoof!” 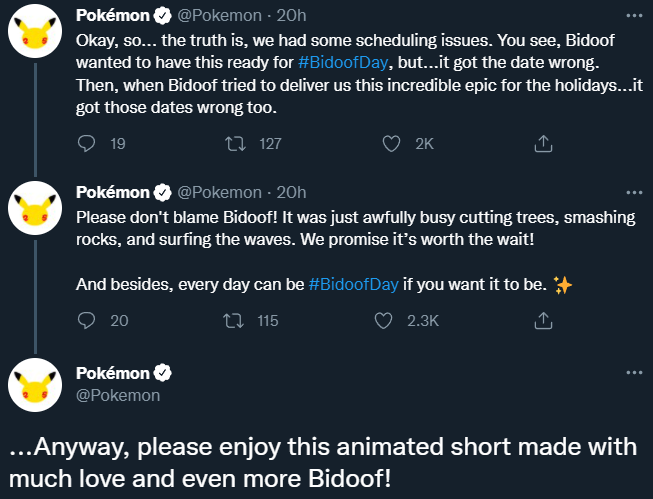 So what about the short itself?

For those of you who haven’t yet watched it via The Official Pokémon YouTube channel, the story is pretty simple: the rodent regularly meme’d on as being useless is shown to be almost just that, getting let down after her hopes get built up, but eventually finding her own moment to shine. 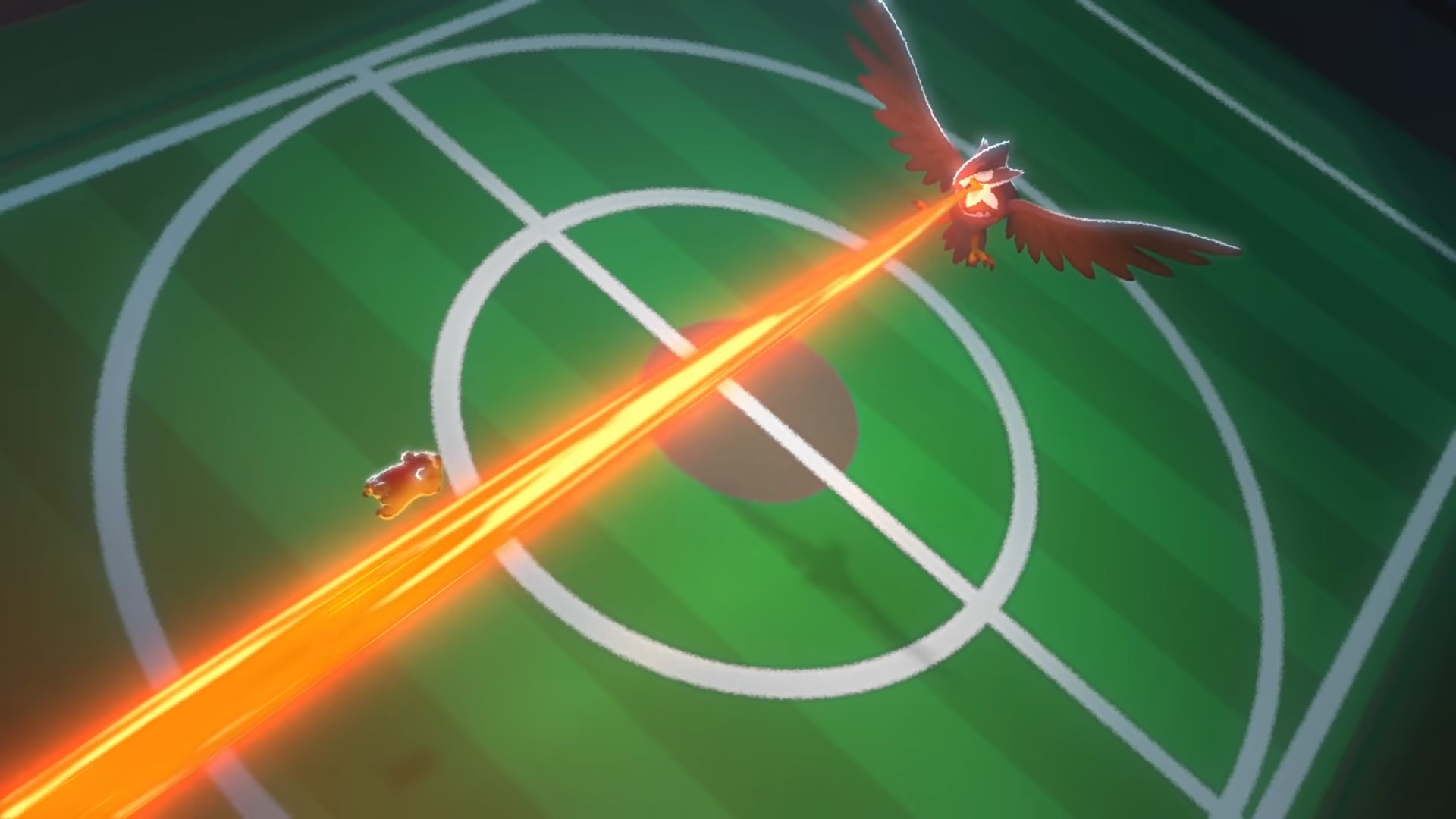 Even ignoring what’s intentionally made for younger children, Pokémon animated shorts are usually pretty saccharine, and on paper the plot here fits that.

Yet, I found myself utterly enamored by this eight minute cartoon – though the reason why may anger some fans of the main anime series. 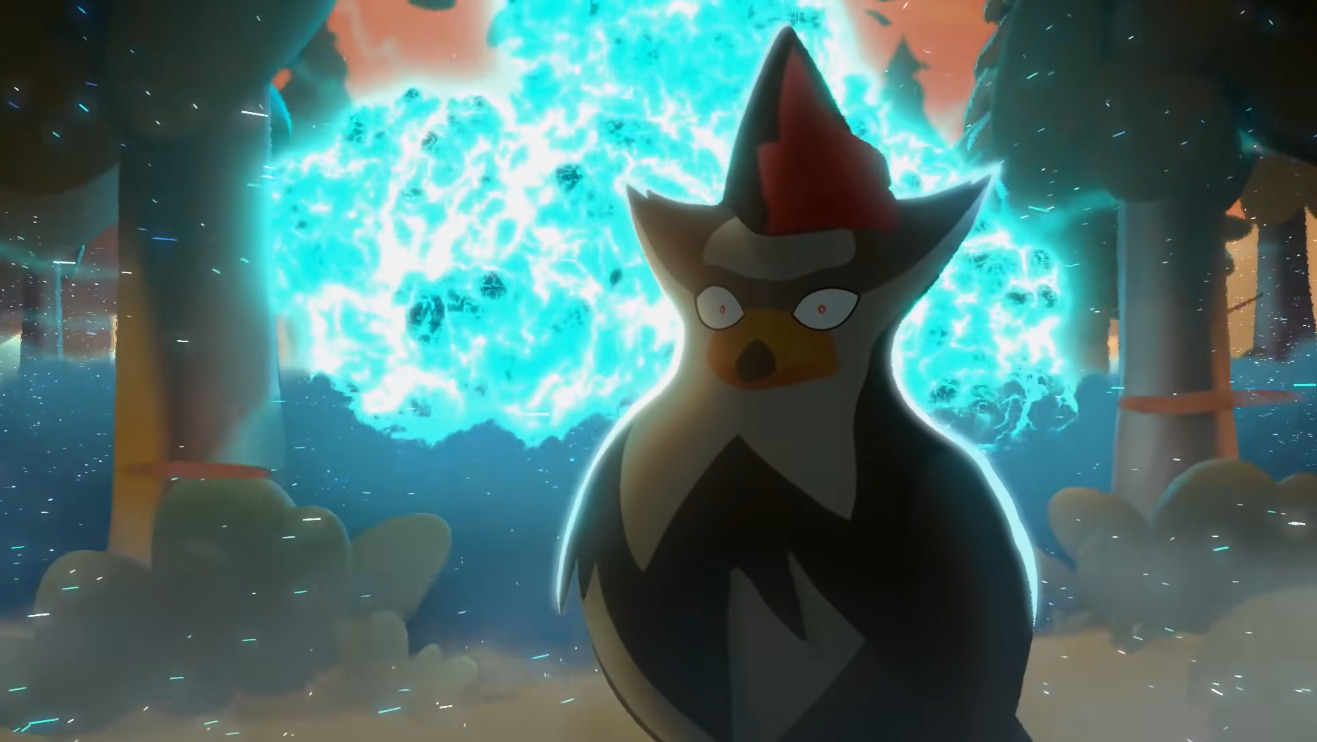 I can pin-point the exact moment I fell in love with the Bidoof short; 2:14.

So much personality is given to Staraptor (the bird) in those few seconds of it casually leaning out of the way of the attack, reacting in utter horror when the explosion goes off behind it, and ultimately realizing this is a fight it can’t win.

It’s gag that could have (and probably has) been done in the anime, but it’s use here shows so much more personality than what we’ve seen in recent years. In fact, said personality permeates the short as a whole, to the point where a smattering of commenters across YouTube and Twitter seem to share the sincere (albeit impulse-driven) belief that this is one of the best pieces of animation The Pokémon Company have produced in a long time.

Let’s be honest: there are times Japanese animation cuts corners to keep budgets down. The Pokémon anime is no exception.

Western animation does it too, especially in recent years (flat coloring and bean-shaped mouths anyone?). Nonetheless, the anime has plenty of shots where either characters stand perfectly still or the only things moving are the camera and a flashy background.

These cost-cutting measures are understandable in light of how the series has had to pump out episode-after-episode to keep the craze going.

It’s even more understandable when you consider the anime’s animators are allegedly paid less than convenience store clerks [1, 2].

While the official anime definitely has its share of moments where the budget seems to go up a bit, and the movies certainly try to push the boat out, the latest episodes of the series (which are unsurprisingly better animated than the 90s series) nonetheless have moments where characters are dragged across the screen while the only thing moving is their mouth or frames of animation are repeated over and over in order to pad runtime.

For comparison, Bidoof’s Big Stand is CG animated. While the anime uses flashy effects to cover up a limited animation budget and time constraints, animating purely in CG demands more attention be paid to details. 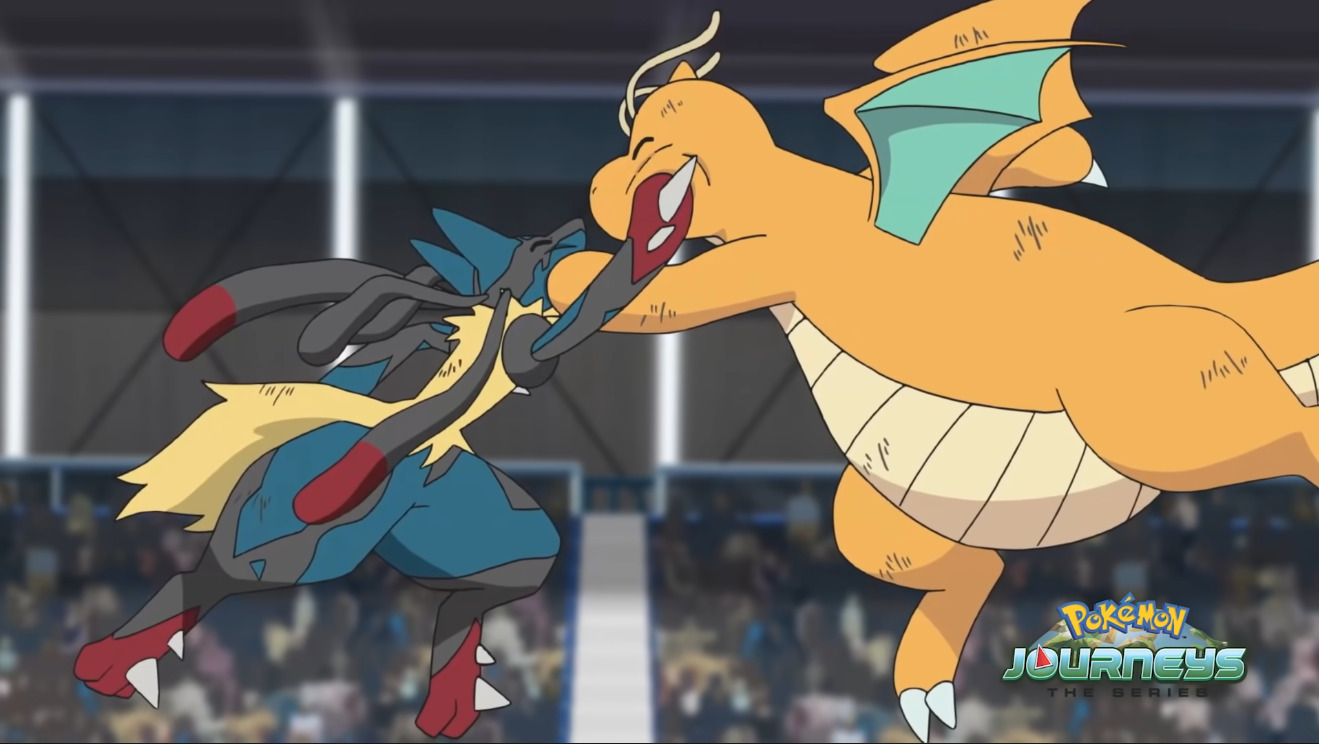 In a cartoon, if a character stands perfectly still, it’s usually forgiven. Whether it’s Scooby-Doo or Family Guy, there’s nothing abnormal about a character waiting motionless for their cue.

However, in CG – even in art-styles that decidedly aim away from looking realistic – a living character standing that still for any length of time, for any reason other than comic effect, can seem weird. 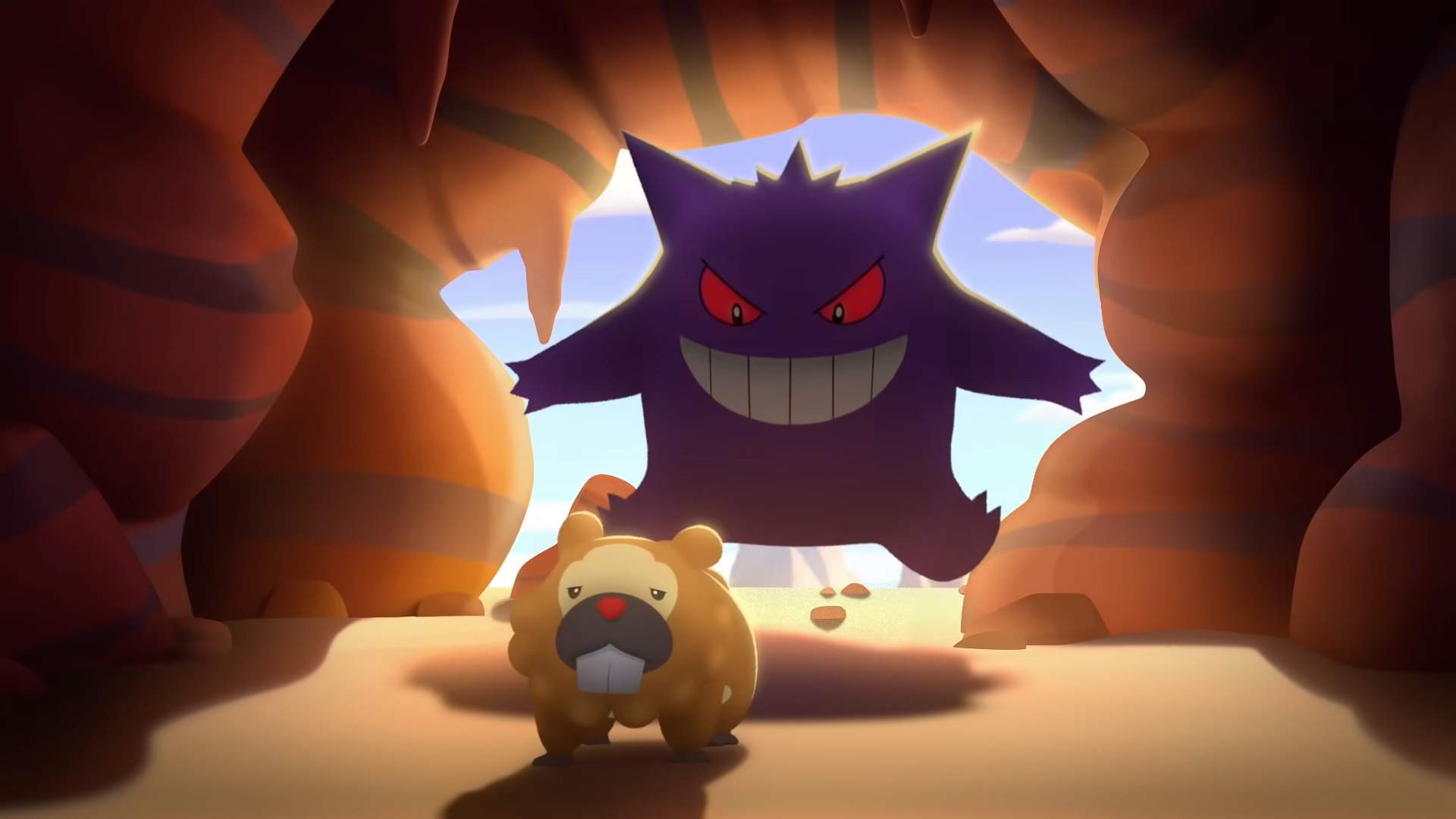 This smoother animation, which gives every character on screen a sense of movement no matter how small, along with a number of other tiny details all add up to something with more soul.

It somehow feels like there was real love behind it, rather than a corporation, a studio being paid, and a contract with strict rules. 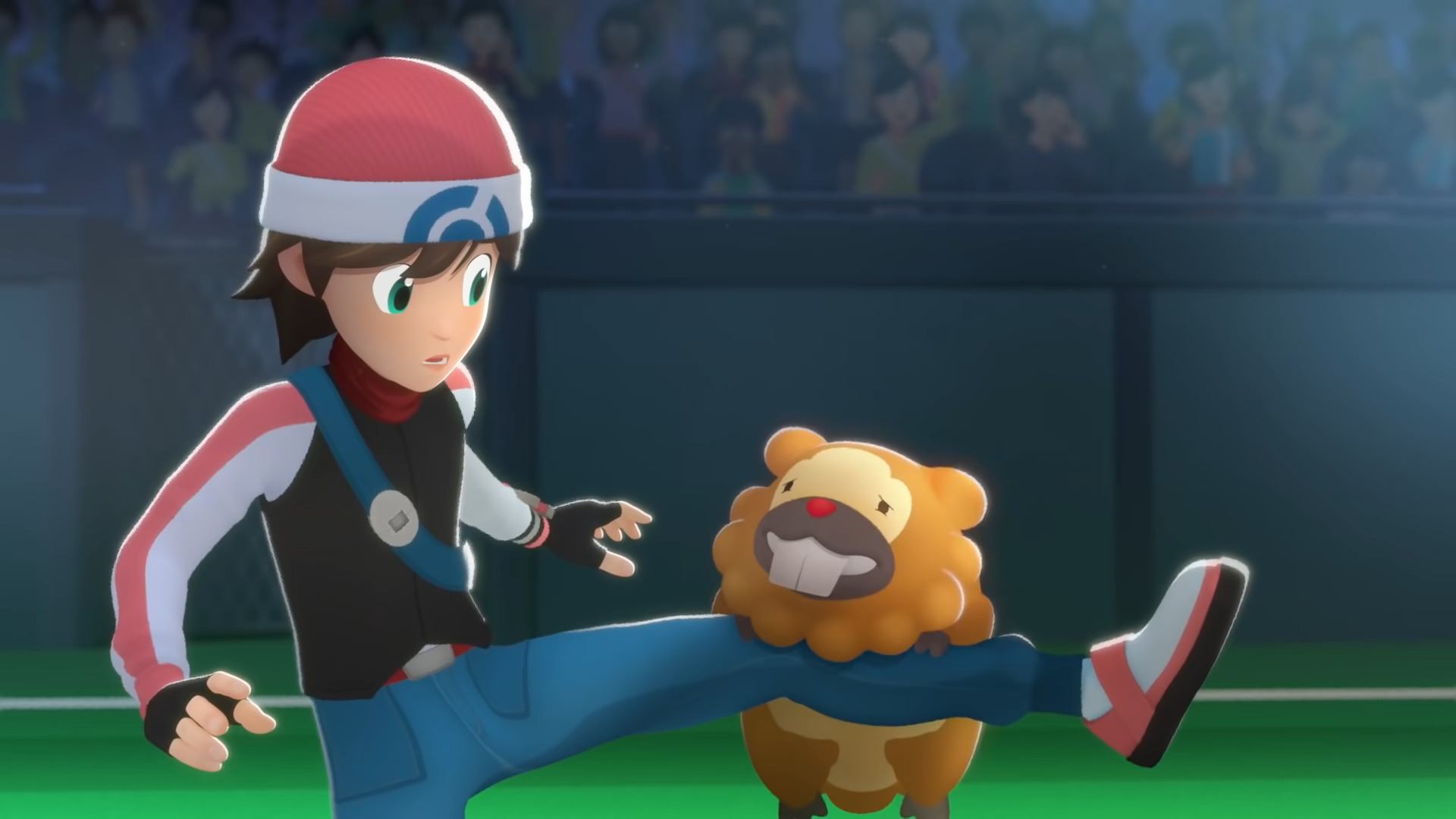 As a mega-brand, it’s not hard to imagine Pokémon is pretty strict about how every one of their highly-marketable characters are represented. After all, Nintendo gave Disney specific instructions on how how Mario nemesis Bowser should hold a tiny teacup in his giant claws for Wreck-It Ralph.

Thus, when it was announced that the Diamond and Pearl remakes being made by a developer other than Game Freak, fans weren’t just surprised – they also felt worried, as it flew in the face of everything fans had come to assume about the brand’s quality protections. 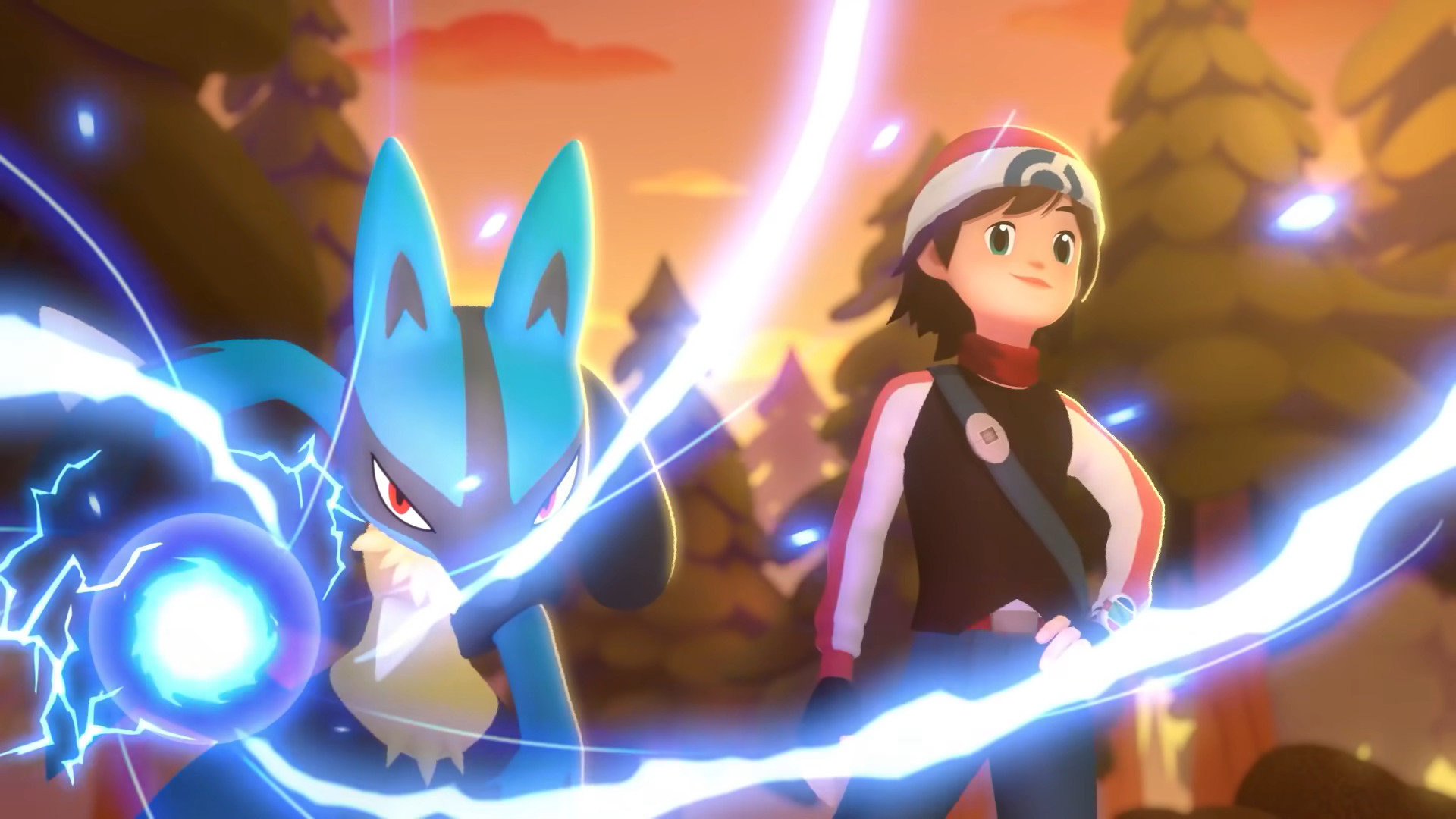 Sadly, those fears eventually came to light, as after that announcement., bright spots in the future’s franchise were few and far between.

The last positive “out there” moment fans had after this was the appearance of Gengar’s evolutionary line spacesuits [1, 2, 3] for the loot box peddling MOBA Pokémon Unite and the aforementioned music video. 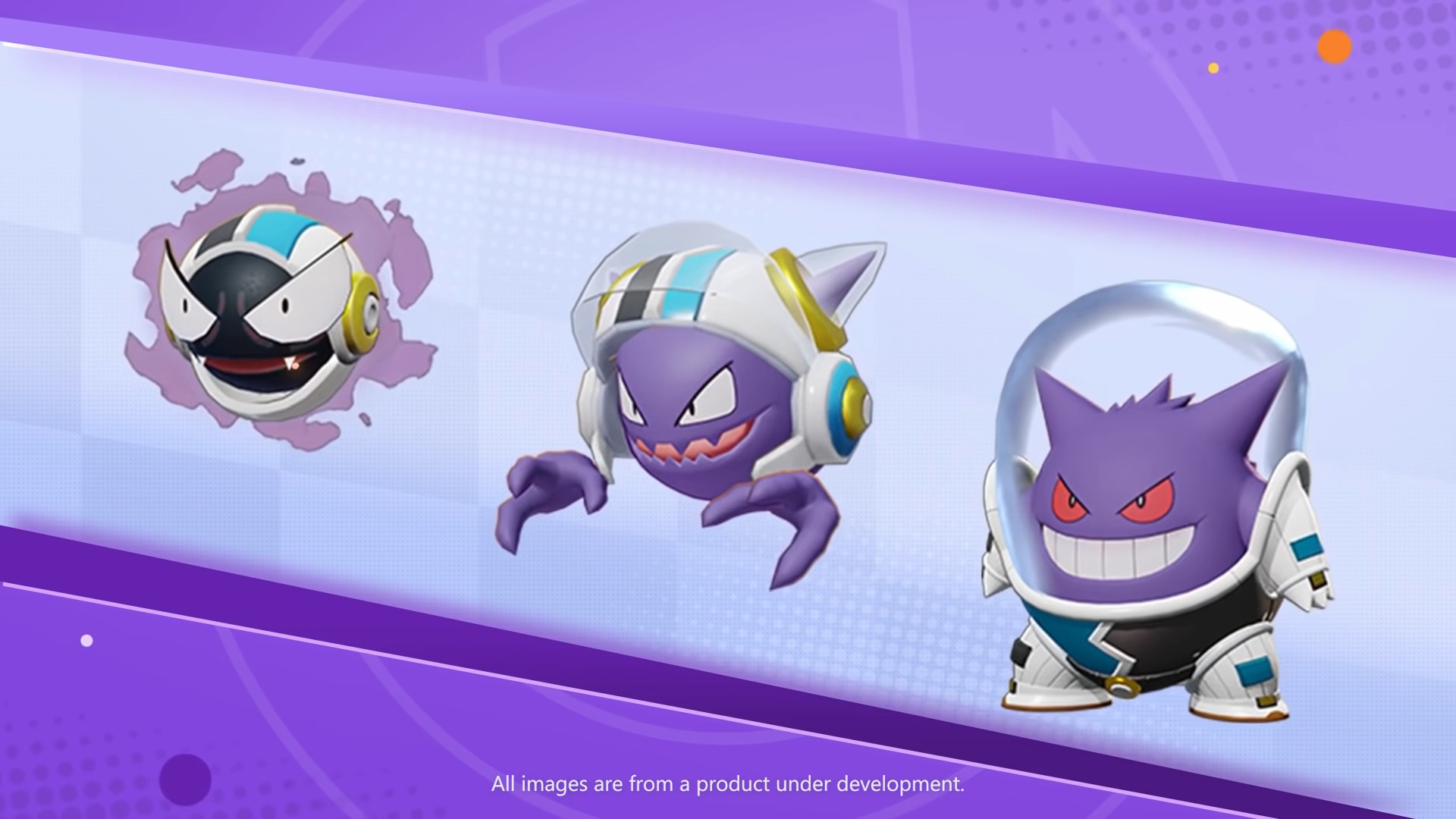 So, credit where it’s due, The Pokémon Company chose right with Taiko Studios. The Los Angeles and Wuhan based studio (easy on the pitchforks fellas) boasts that it “bridges eastern and western sensibilities.”

That’s certainly the case with Bidoof’s Big Stand, as the short has little hints of “stretch and bounce” not typically seen in anime, and shows the animators’ knew when and where to use Western or Japanese style animation gags, tricks, and style.

Their “One Small Step” short has won numerous awards, and one upload of the short on YouTube has reached over 30 million views. (you can buy it officially via YouTube here). The short also shows a style that can only really be described as a bridge between eastern and western animation.

Am I saying The Pokémon Company should take this short-producing studio, and keep throwing money at them to make a full-blown Pokémon series? Lord no – time constraints alone would spell the need to cut corners.

I’m not even suggesting this studio produce more Pokemon shorts. Rather, I believe that if The Pokémon Company has the money to take risks, they should allow fresh blood to use their IP in a way that will inject life into the brand.

Essentially, it boils down to the question, ‘Does The Company want people to assume their animation and other efforts will always be the same, or something unique that demands checking out to see what’s new?’ 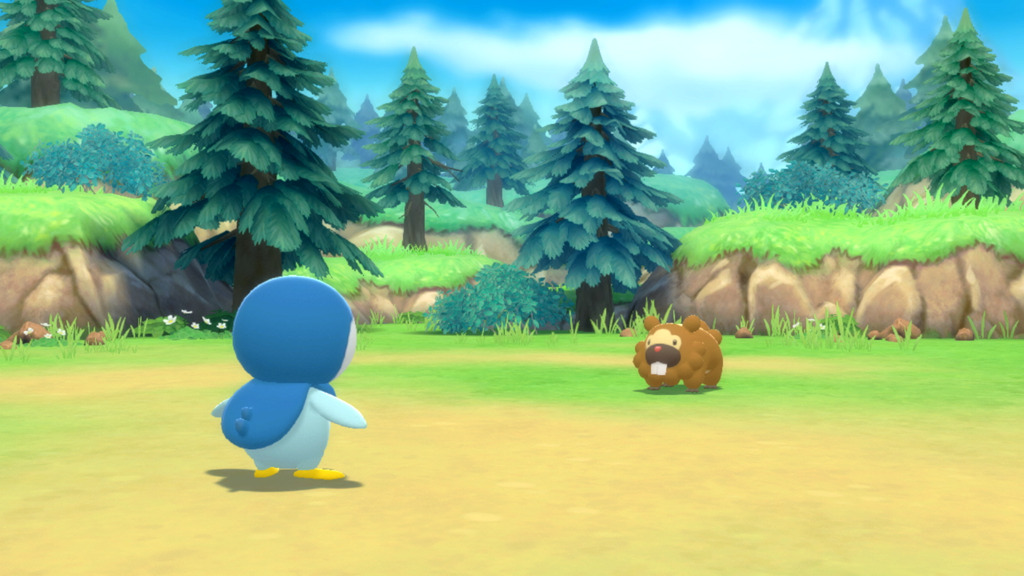 While DENA’s Pokémon Brilliant Diamond and Shining Pearl have sold like hot-cakes [1, 2] and critics found them pretty good, fans were widely lukewarm on the release [1, 2].

Considering the brand’s power and bank-balance, “pretty good” is a failure, and “average” for a major title should be a crisis (although, we are in a world where The Last Jedi is only a minor inconvenience to the mouse, so I guess all bets are off). 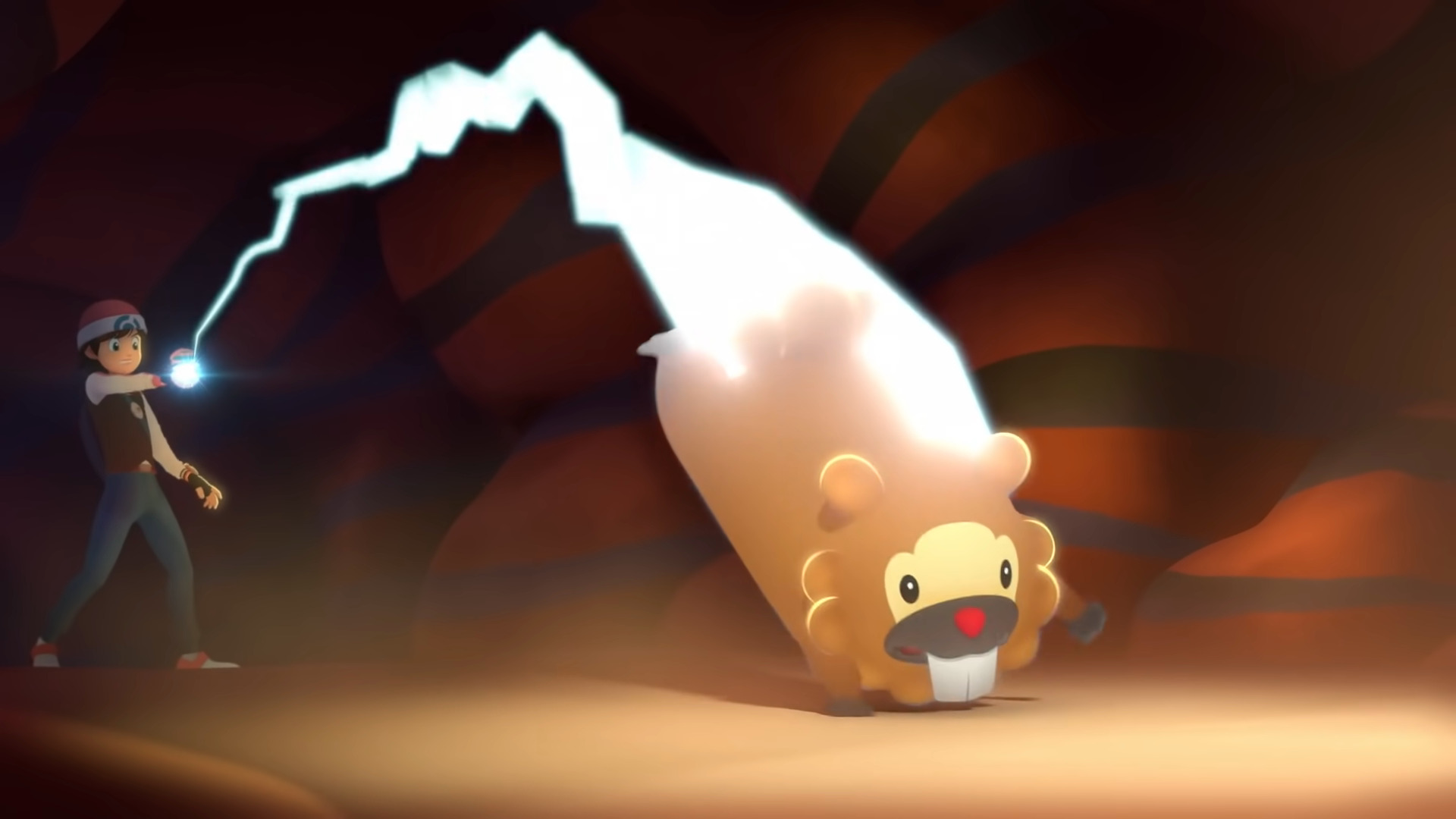 Like many other Japanese IP titans, the Pokémon brand thrives on a cycle of nostalgia which sees older fans eventually move on and new fans plant the roots for their own memories to be exploited late.

However, more often than not, said titans have attempted to deliver quality while doing so. While series like Final Fantasy, Dragon Quest, Monster Hunter have each had their stumbles, but they’ve also typically produce “must-play” titles that aren’t afraid to experiment. 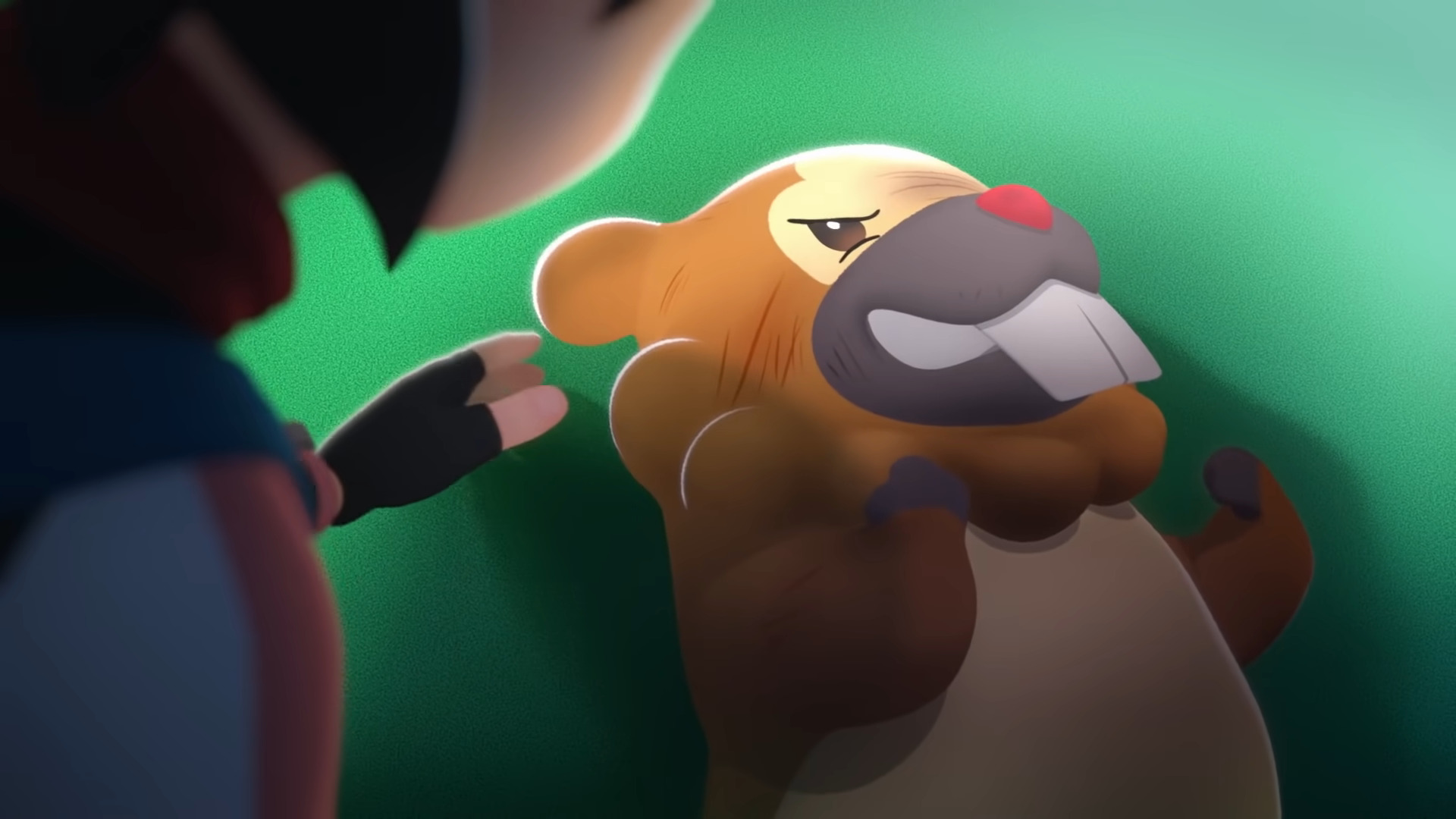 Pokémon just doesn’t have that reputation any more. It’s a fast food chain. It’ll always turn a huge profit, but it doesn’t produce anything of quality and fails to live up to its potential.

Even smaller “indie” cafes and restaurants seem to be doing better than the monster-themed joint in many ways, save profit.

How long will investors, or even their own staff, be happy with bad PR with every move made? How long until new fans stop arriving? 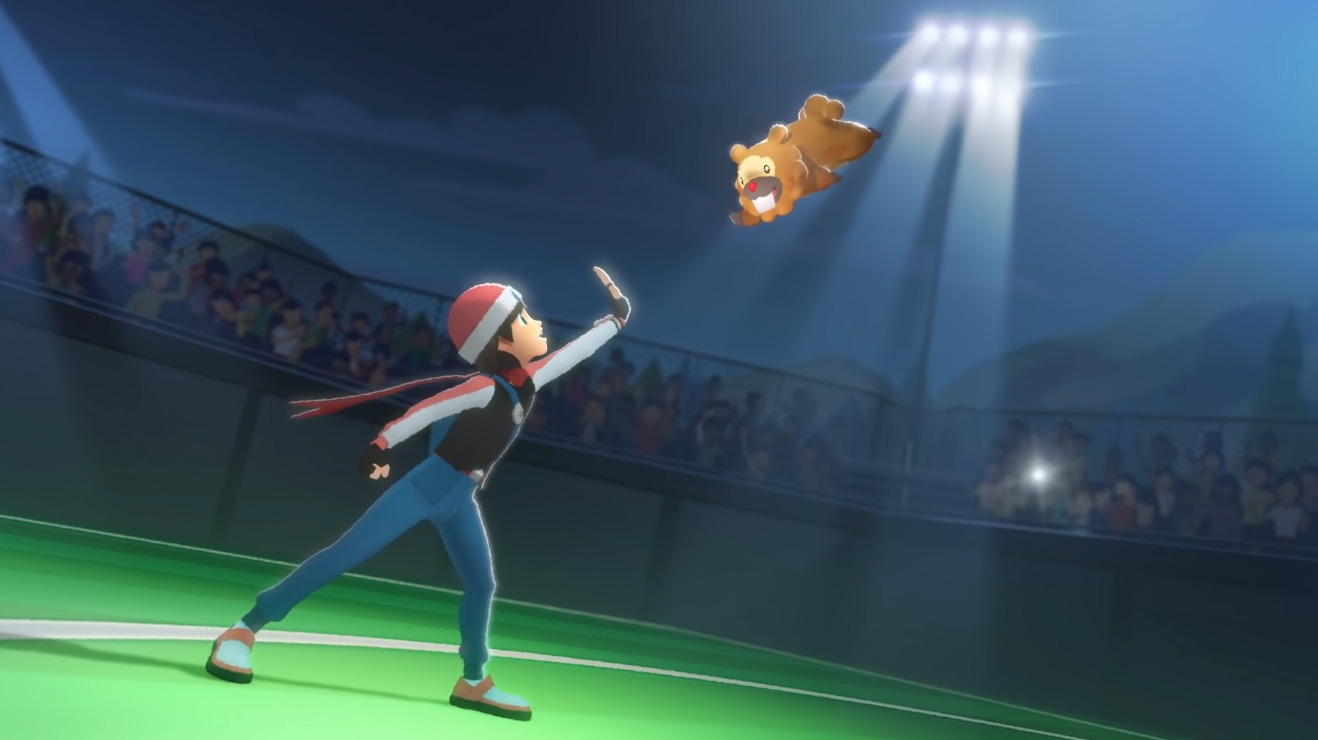 I feel this silly short about a little beaver is a small sign of what Pokémon can be when passion is back behind a project.

Sure it was late for whatever reason, but the delay was clearly worth the wait. Whether it’s new talent, longer development times, more budget, or just not handling the IP with kid gloves, the brand has the potential to be not only something that turns a profit, but also something worth buying into. 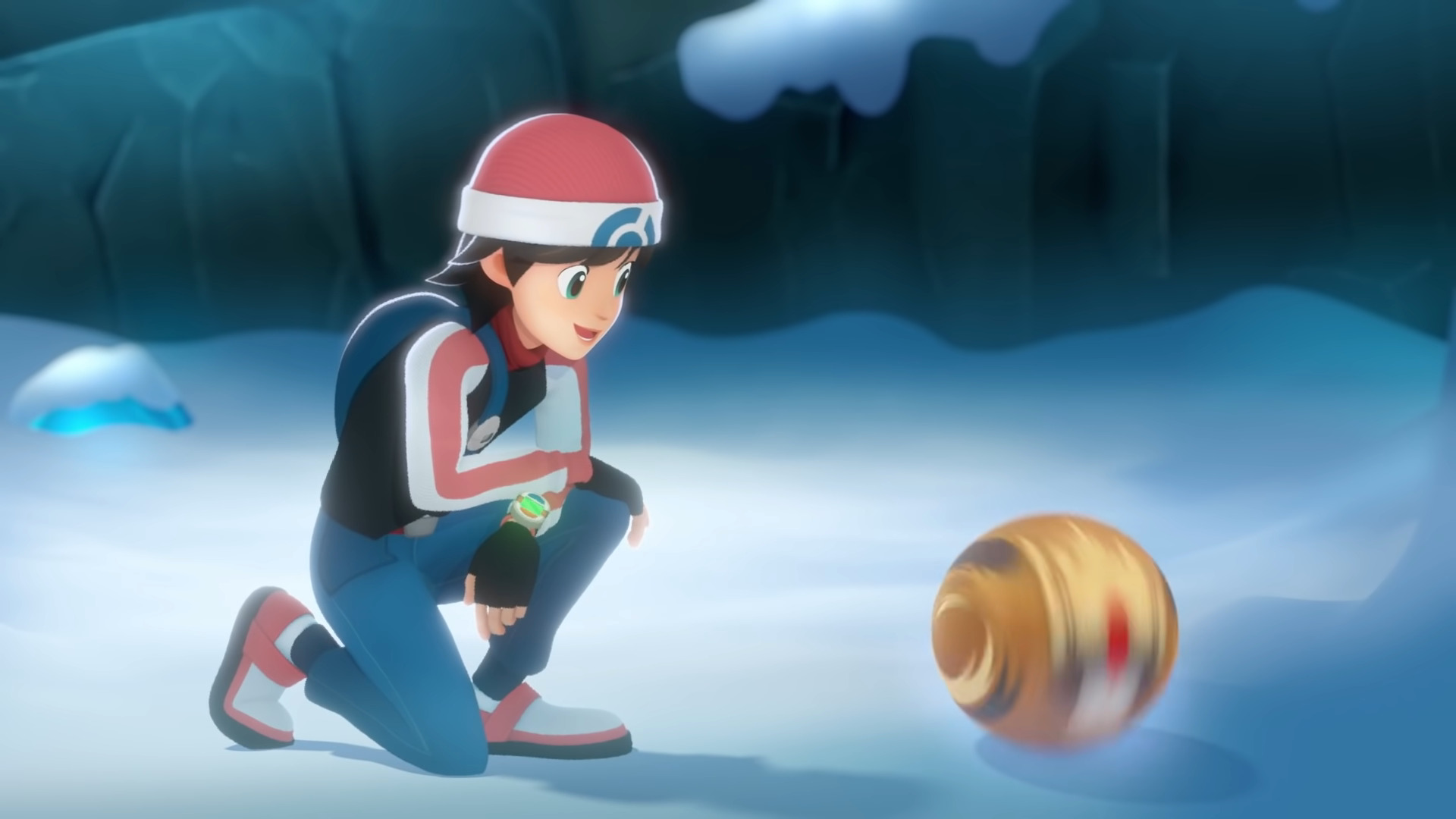 The lore in the video games state that Bidoof need to constantly gnaw to whittle down its teeth, and it (surprisingly) has nerves of steel. Pokémon shouldn’t be afraid to experiment more, improving upon what works, and ditching what doesn’t.

There’s a lot The Pokémon Company can learn from Bidoof. 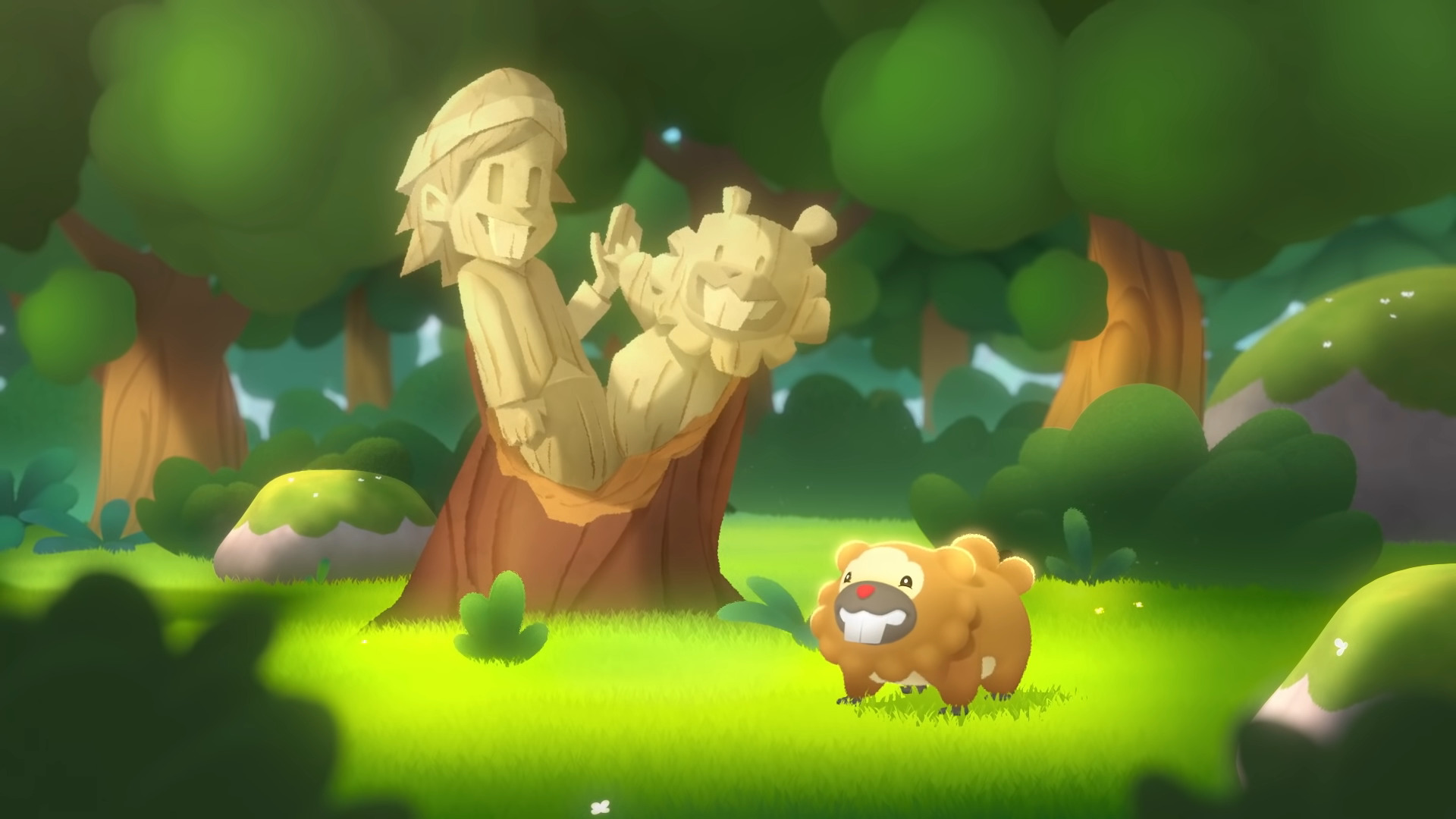 What do you think of Bidoof’s Big Stand? Let us know your thoughts on social media or in the comments down below!