Recently-deleted tweets from a Lucasfilm insider reveal J.J. Abrams initially wanted to destroy a fan-favorite planet in Star Wars: The Force Awakens. Apparently, Abrams had planned to destroy the popular prequel trilogy planet Coruscant, but executives at Lucasfilm said no.

Instead, the two parties reached a middle-ground. The city-planet Hosnian Prime was created as a stand-in for Coruscant, another city-planet that served as the galaxy’s new capital.

In the final cut of The Force Awakens, Hosnian Prime — which looks strikingly similar to Coruscant — was destroyed by the First Order’s Starkiller Base as its operators flexed their muscles by destroying an entire solar system full of planets.

The insider — Lucasfilm executive Pablo Hidalgo — made these revelations in a series of since-deleted posts on Twitter.

Hidalgo later added another tweet to further clarify his comments. “I should say ‘some folks at’ because it’s not like companies have points of view,” he tweeted. 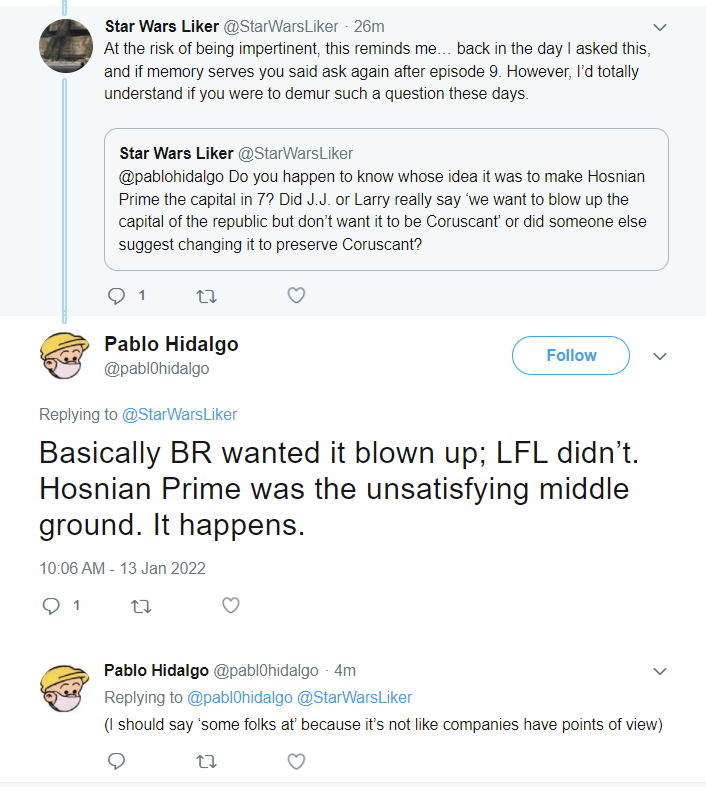 There is one major reason Lucasfilm may have wanted to spare the fan-favorite city-planet. Colin Trevorrow — the filmmaker originally slated to direct the finale of the Star Wars sequel trilogy — had planned to make Coruscant a key setting in his canceled film, Duel of Fates.

Hidalgo stated that one of the reasons Coruscant was off-limits was its involvement in another Star Wars project. It seems likely that this project was Trevorrow’s since-canceled film.

“It would have been better w/o the Starkiller at all, but that’s a whole nother discussion. But I think Coruscant being in development in other projects was a big reason for the reticence,” Hidalgo tweeted. 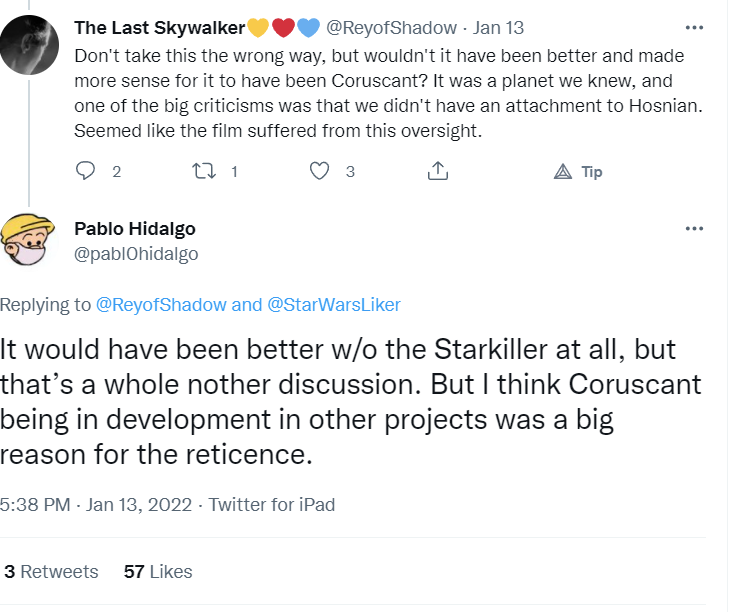 This news further emphasizes an oft-repeated criticism fans have voiced about the trilogy. An apparent lack of coordination between the three films’ directors and a lack of vision from Lucasfilm led to a final product that many described as feeling disjointed.

Rather than asking the directors to follow a pre-planned, cohesive story template for the trilogy, Lucasfilm gave complete creative control of each new installment to that movie’s director.

During an interview with Collider, Abrams suggested that the trilogy would have been better off if there had been a plan from the beginning.

“You just never really know, but having a plan I have learned – in some cases the hard way – is the most critical thing, because otherwise you don’t know what you’re setting up. You don’t know what to emphasize. Because if you don’t know the inevitable of the story, you’re just as good as your last sequence or effect or joke or whatever, but you want to be leading to something inevitable,” Abrams said.

YouTuber Ryan Kinel of RK Outpost relayed these ideas in his own coverage of Hidalgo’s revelations.

“These people lack any creativity whatsoever and so then when they’re deadset on controlling a massive planet, they make one up,” Kinnel said. “Disney Star Wars is so terrible.”

“Star Wars is being made by people that don’t know what they’re f***ing doing. J.J. Abrams is a complete and total hack and once again he’s being exposed for it.”

What do you make of this revelation that Hosnian Prime was created as a stand-in for Coruscant and the fact that Pablo Hidalgo is now openly criticizing Disney’s sequel trilogy?