In light of the many accusations that she engaged in ‘blackface’ for speaking and acting with black-originating speech inflections throughout her career, comedian and Shang-Chi and the Legend of the Ten Rings star Awkwafina has both issued an apology to those who felt offended and announced her retirement from Twitter. 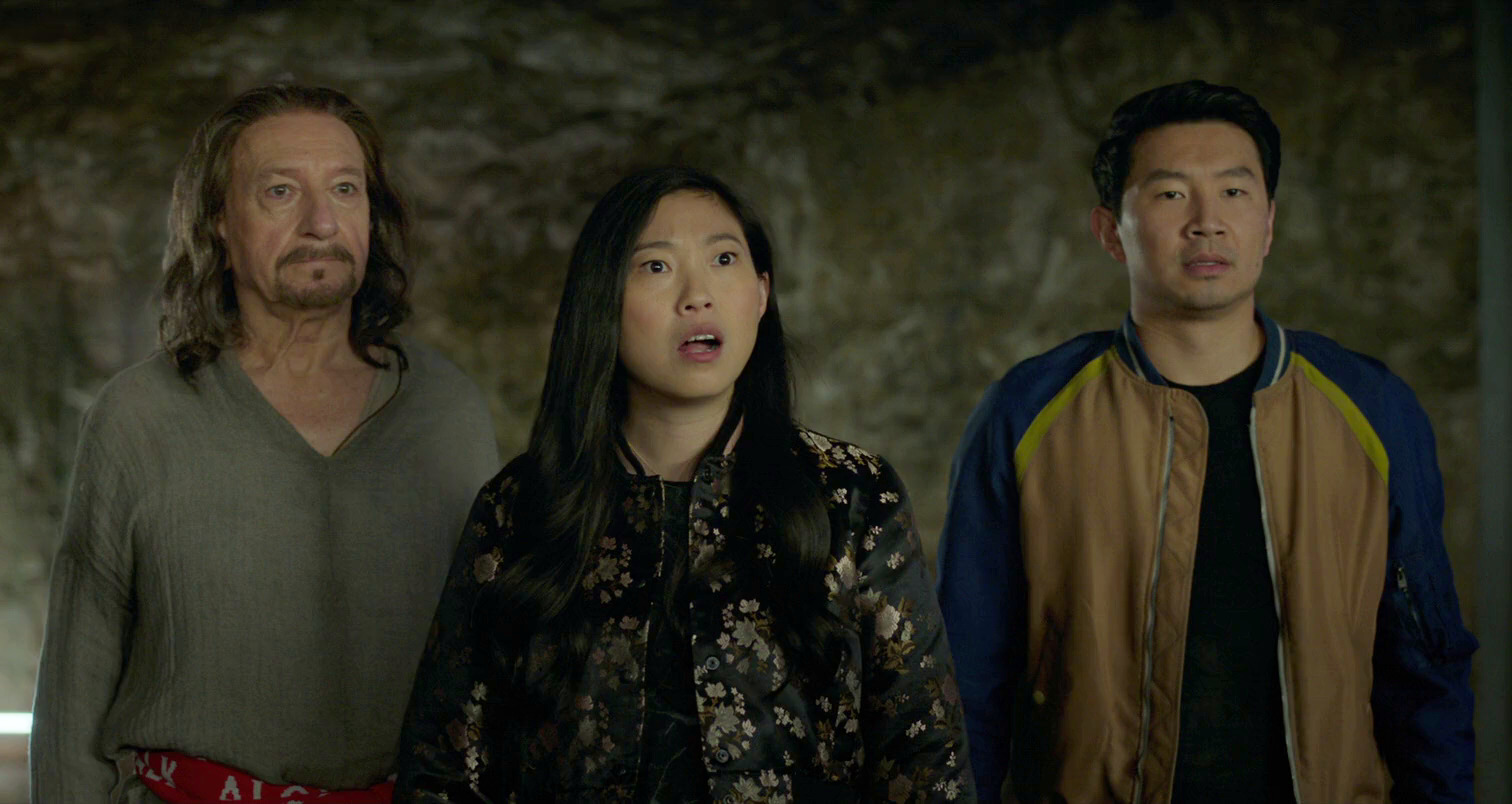 Such accusations have been leveled against Awkwafina, the ‘in-your-face,’ and ‘from the streets’ stage ego of performer Nora Lum, since she first gained viral attention in 2012 for her rapping of a self-written parody of the Mickey Avalon song “My Dick” aptly titled “My Vag.”

As her career continued to grow thanks to prominent appearances in Hollywood films such as the all-female remake of Ocean’s 8 and the smash-hit Crazy Rich Asians, criticisms of her use use of what is popularly referred to as African-American Vernacular English (AAVE) only continued to grow, eventually culminating in a number of outraged think pieces published in both the leadup to Shang-Chi’s premiere and the aftermath of her nomination for an NAACP Image Award. 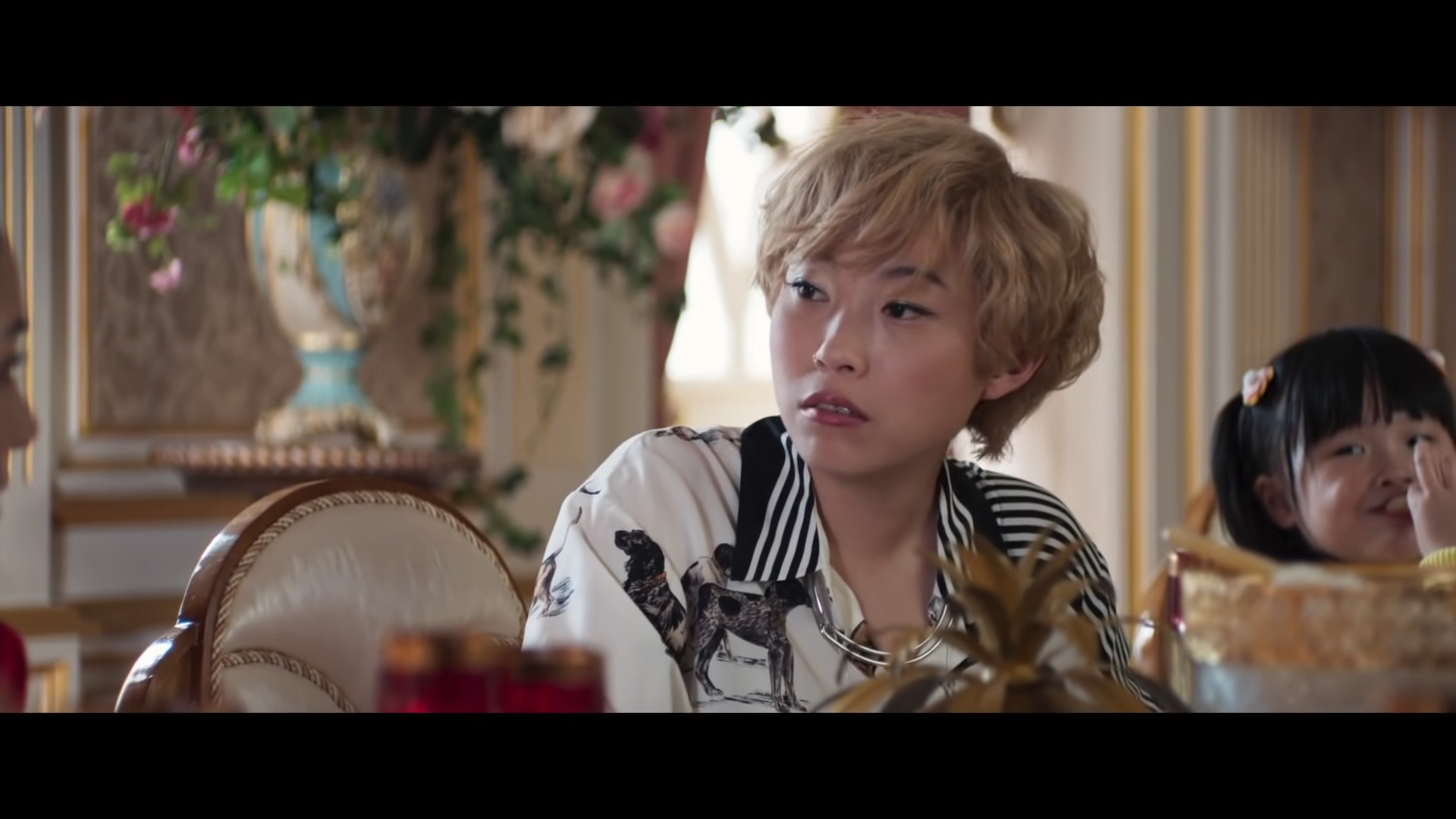 Despite maintaining a relative silence on the issue in recent months, Awkwafina took to Twitter on February 5th for the first time in two years to address the outrage against her, opening a lengthy statement with the declaration that “there is a sociopolitical context to everything, especially the historical context of the African American community in this country.”

“It is a group that is disproportionately affected by institutionalized policies and law enforcement policies – all the while having historically and routinely seen their culture stolen, exploited and appropriated by the *dominant culture* for monetary gain without acknowledgement nor respect for where those roots come from, the pioneers of its beginnings and the artists that perfected and mastered the craft,” she continued. 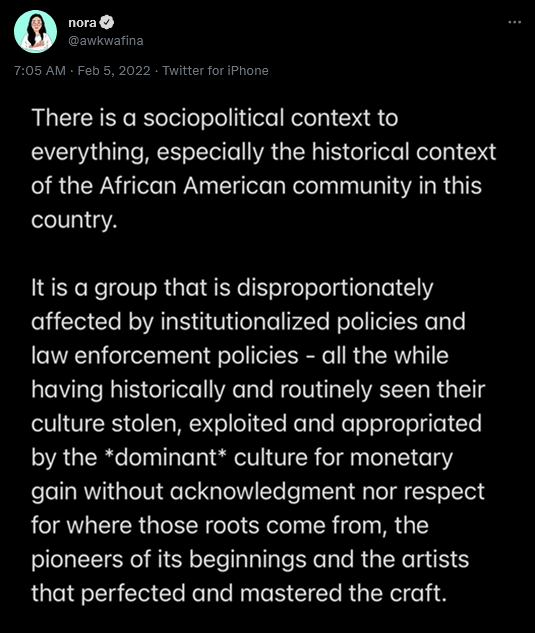 “It is a problem we still see today – though some may pass it off as a convoluted mixture of the ‘internet TikTok slang generation’ that liberally uses AAVE, [not] to add that hip hop – a genre of music that is ubiquitous and beloved across the country – has now anchored itself as a mainstream genre in music history,” said the comedian-turned-actress.

She added, “And in life, linguistic acculturation, immigrant acculturation, and the inevitable passage of globalized internet slang all play a factor in the fine line between offense and pop culture.” 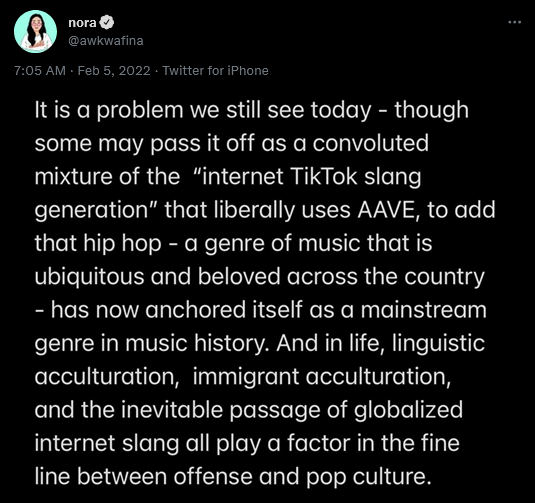 “But as a non-black POC, I stand by the fact that I will always listen and work tirelessly to understand the history and context of AAVE, what is deemed appropriate or backwards towards the progress of ANY and EVERY marginalized group,” she then declared. “But I must emphasize: To mock, belittle, or to be unkind in any way possible at the expense of others is Simply. Not. My. Nature. It never has, and it never was.” 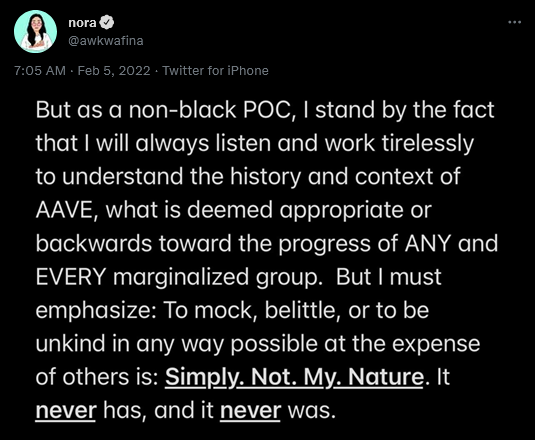 Further, Awkwafina explained, “My immigrant background allowed me to carve an American identity off the movies and tv shows I watched, the children I went to public school with, and my undying love and respect for hip hop.”

“I think as a group, Asian Americans are still trying to figure out what that journey means for them – what is correct and where they don’t belong,” she opined. “And thought I’m still learning and doing that personal work, I know for sure that I want to spend the rest of my career doing nothing but uplifting our communities.”

“We do this first by failing, learning, acknowledging, hearing and empathizing,” she concluded. “And I will continue, tirelessly, to do just that.” 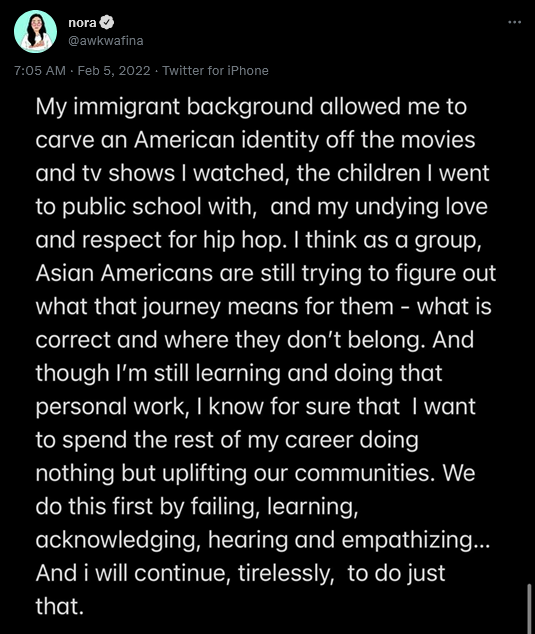 In a pair of follow-up tweets, she announced, “Well, I’ll see you in a few years, Twitter – per my therapist.”

“To my fans, thank you for continuing to love and support someone who wishes they could be a better person for you,” she wrote. “I apologize if I ever fell short, in anything I did. You’re in my heart always.”

However, in clarification, she ultimately noted, “I am retiring from the ingrown toenail that is Twitter. Not retiring from anything else, even if I wanted to, and I didn’t drunkenly hit someone with a shoehorn and now escaping as a fugitive. Also am avail on all other socials that don’t tell you to kill yourself!”

What do you make of Awkwafina’s apology? Let us know your thoughts on social media or in the comments down below!

NEXT: Thandiwe Newton’s Apology To Darker-Skinned Women Exposes The Rot Inside Hollywood