Despite the publisher regularly putting themselves as champions of diversity and representation, artist Greg Smallwood has revealed that Marvel made edits to his artwork in an upcoming issue of Elektra: Black, White, & Blood in order to tone down the Asian features of the book’s characters and make them appear “within tolerance for best representation.” 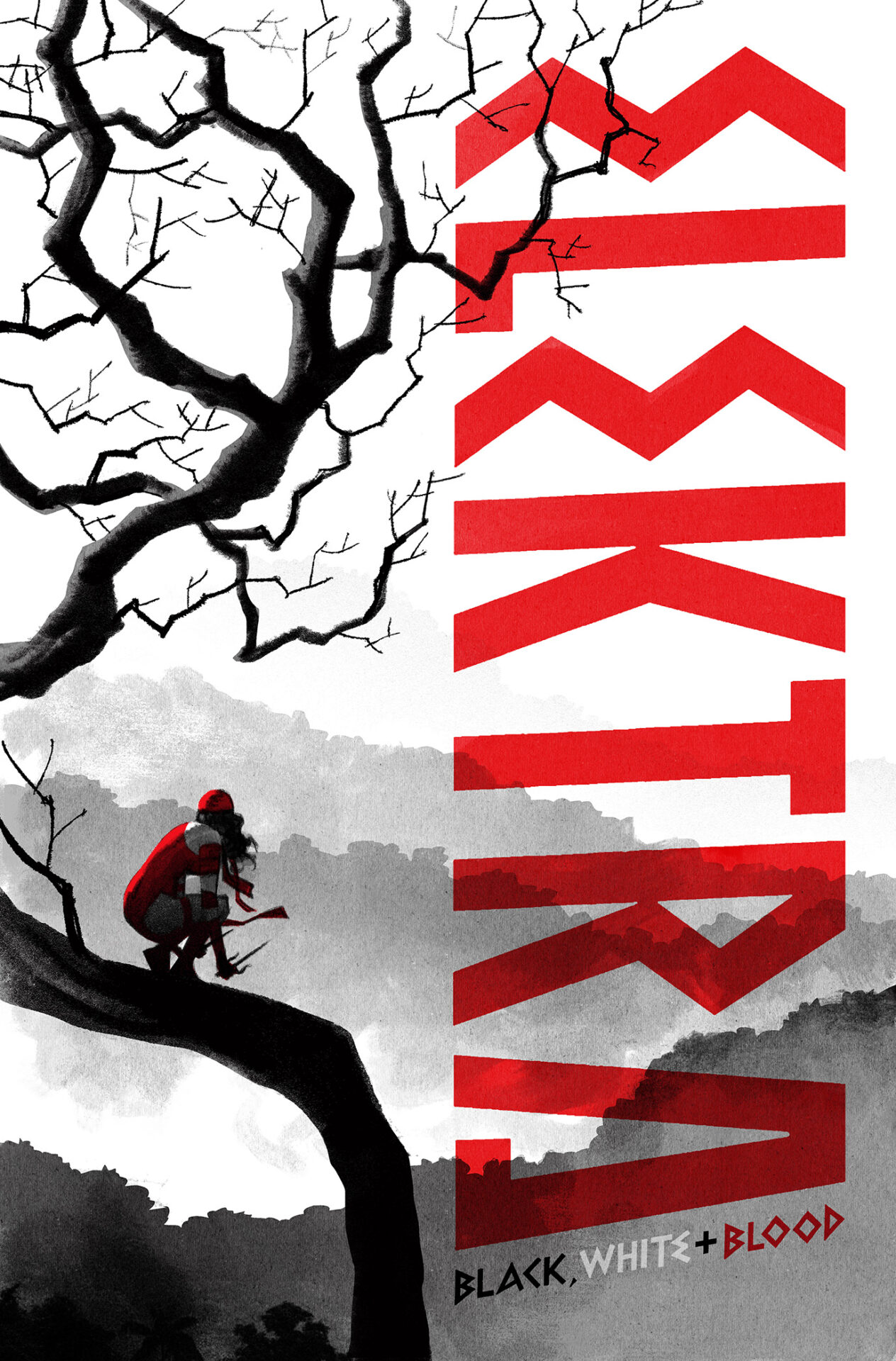 An anthology series featuring a rotating team of artists and writers, each issue of Elektra: Black, White & Blood tells a different, standalone story centered around the titular ninja assassin.

Smallwood’s story, featuring a script by Peter David and Tom Taylor, is set to appear in the series’ upcoming second issue, and according to solicits will see Elektra being tracked on the streets of Madripoor by “a drifter” named Patch. 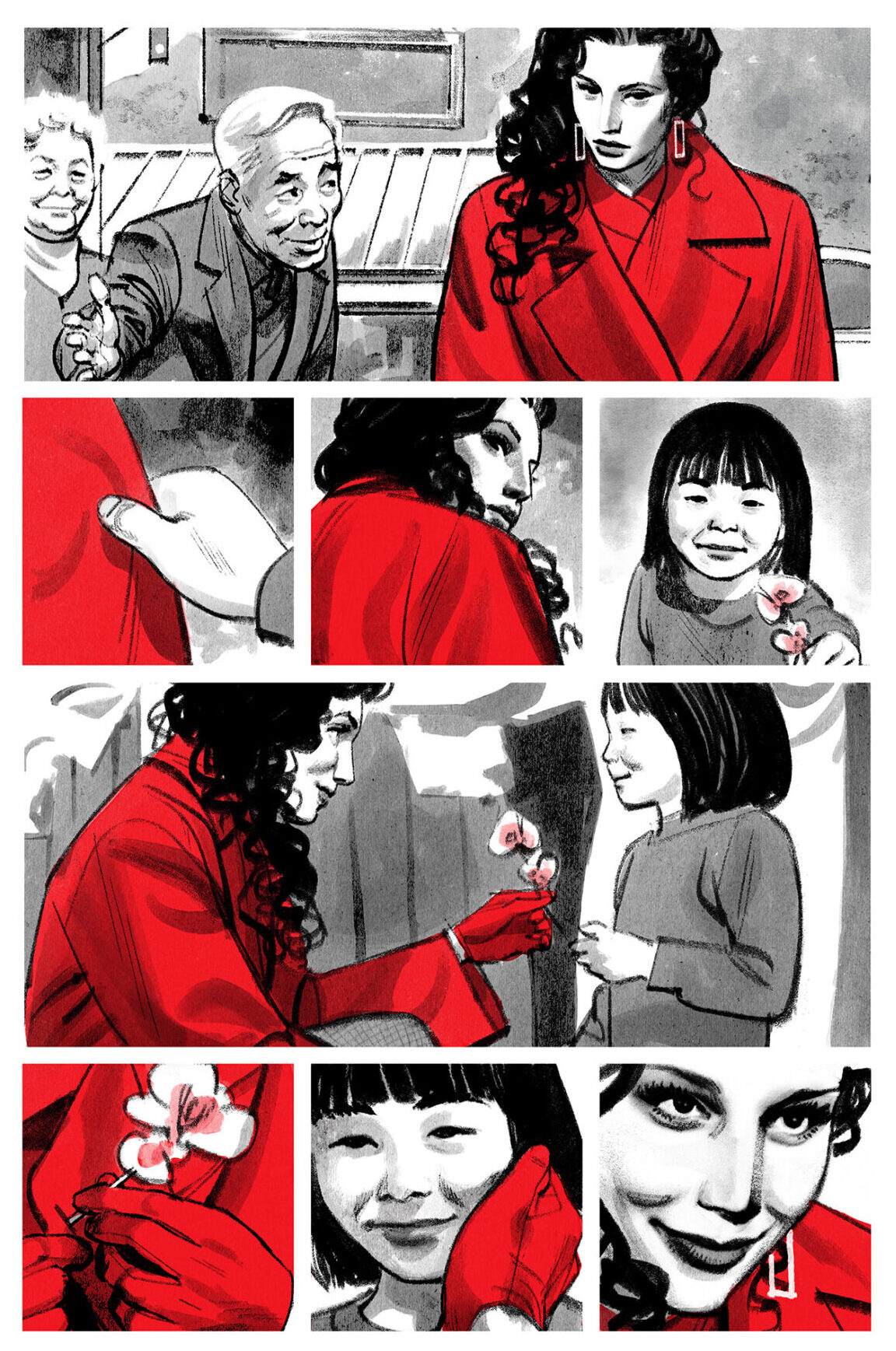 Smallwood – whose credits for the publisher include variant cover work for Doctor Strange: Damnation and series art for Moon Knights Vol. 7 and 8 – reported his discovery of Marvel’s edits on February 9th, taking to his personal Twitter to announce, “Sad to say that, without my approval, Marvel attempted to ‘fix’ several panels of my art in issue two of Elektra: Black, White, & Blood before sending it to the printers.”

“They’re not huge changes but I really don’t like my art being tampered with,” he added, showing one such edit wherein Marvel attempted to ‘widen’ the eyes of an Asian child. 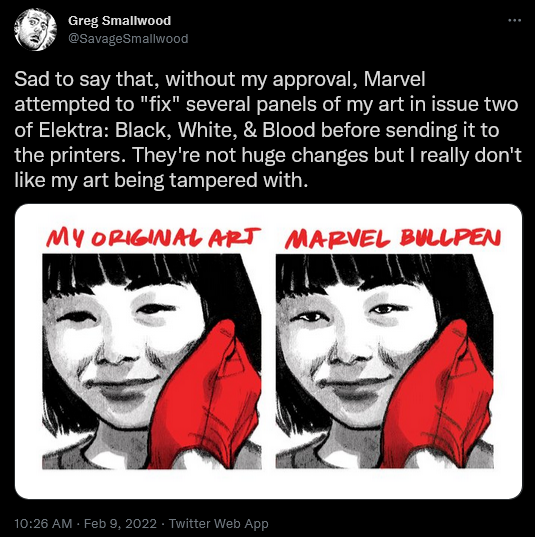 Showing another such edit, Smallwood explained, “Long story short – 2 months after turning in the finished pages, I was informed by my editor that Marvel’s Standards & Practices flagged my art and requested I redraw several panels so that they would be ‘within tolerance for best representation of Asian characters.’” 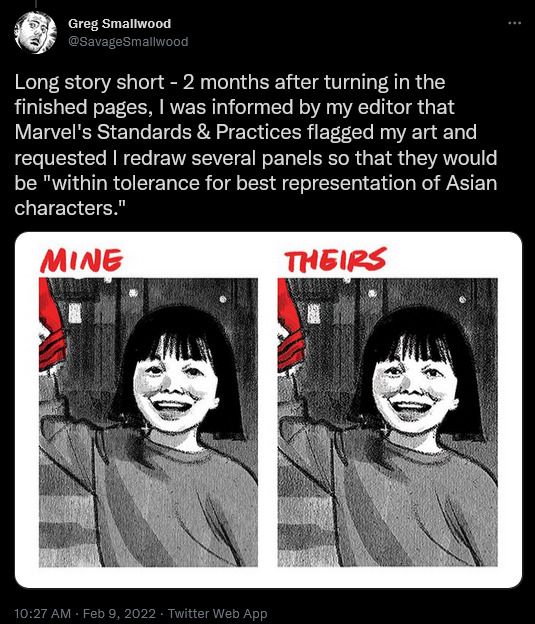 “Wife and I were expecting our second child the following week and I was racing to finish an issue of [DC’s Human Target] before the birth so I told Marvel that I didn’t have time to make the changes but that I would be perfectly fine with them pulling the story for sensitivity concerns,” he elaborated. 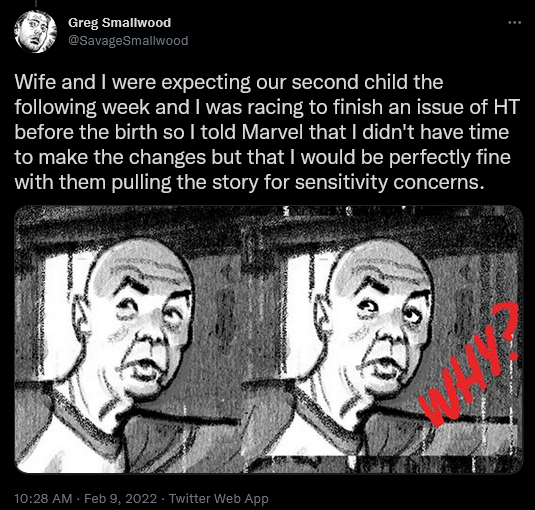 Yet despite this flexibility, according to the artist, Marvel rejected this offer, telling him, “that pulling the story was not an option and if I couldn’t do revisions, the Marvel Bullpen would ‘take a crack’ at my pages instead.”

“I stated very clearly that I didn’t want anyone touching my art so I dropped everything I was doing and immediately reworked all of the panels that were flagged,” he added.

“Unfortunately,” Smallwood then lamented, “I just found out yesterday that the folks at Marvel didn’t even bother using my new art and instead went to print with their own revised pages. I was not given a chance to make further revisions or even approve the alterations made by the bullpen.”

Smallwood then noted that it was not only the realistic features of Asian characters that Marvel had attempted to change, but also a slight suggestion of nudity presented by a terrifying female monster.

“They also attempted to cover up some nudity which just resulted in a muddied mess,” he said. “Again, something I was willing to fix.” 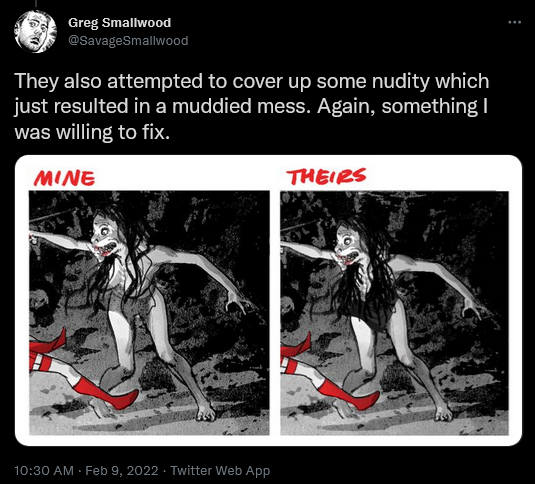 Ultimately, Smallwood concluded his thread by asserting, “Just wanted you all to know because my name is on that comic but I’m pretty annoyed about how it looks,” and, “as a palate cleanser,” presented “the cover and the first two (also the best) pages, unaltered.” 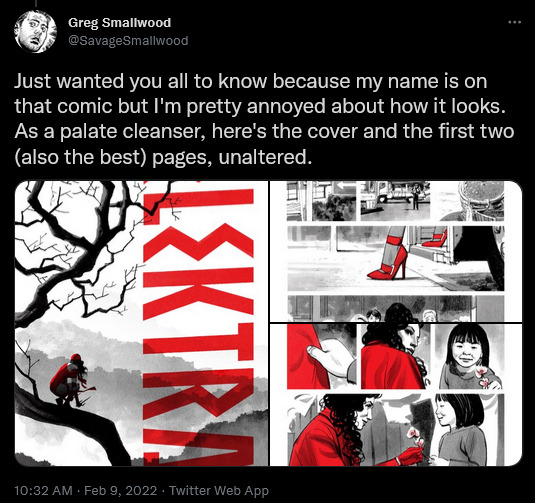 RELATED: Marvel’s Latest Gimmick Is A Desperate Attempt To Make The Eternals Popular

Smallwood’s thread eventually caught the attention of Venom, Daredevil, and the current Devil’s Reign miniseries editor Devin Lewis, who replied to the frustrated artist, “So sorry, Greg, we’ll own the mistake here.”

“Had an email miscommunication on my end, like we spoke about yesterday,” he recalled. “As we already assured you, we’re using your pages on digital editions and any new printings and collections.”

However, Smallwood rejected Devin’s misframing of the situation, firing back the correction, “Not miscommunication. NO communication.”

“Devin apologized to me yesterday for not being able to respond to my emails concerning the edits (some kind of server error on his end),” the artist clarified to the public. “He was not apologizing for the changes. He assured me yesterday that I would be happy with them.” 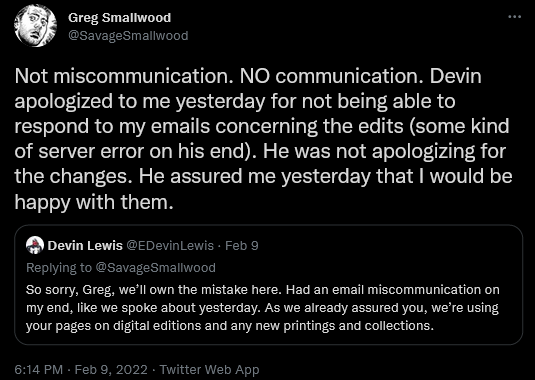 What do you make of Marvel’s edits to Smallwood’s work? Let us know your thoughts on social media or in the comments down below!

NEXT: Marvel Hints At Another Possible Break-Up For Spider-Man And Mary-Jane