Kotaku recently laid into the Korean MMO Lost Ark over the sexy outfits of its female characters, apparently failing to take note of the fact that the game’s Western release had already been censored in anticipation of this line of outrage. 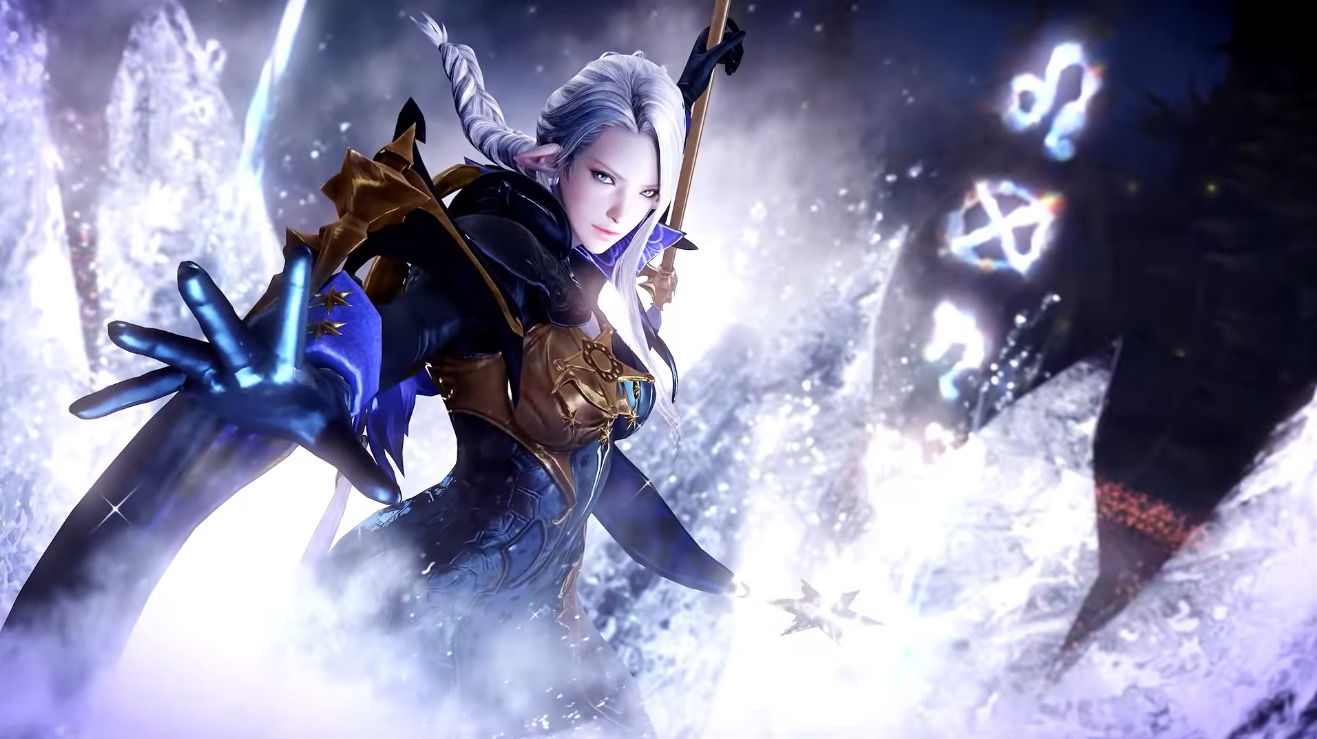 Kotaku’s Zack Zwiezen took issue with what he perceived as sexist content in the Amazon’s new free-to-play, M-Rated title, such as its skimpy outfit options, restriction of certain classes by gender, and female characters’ in-game animations. 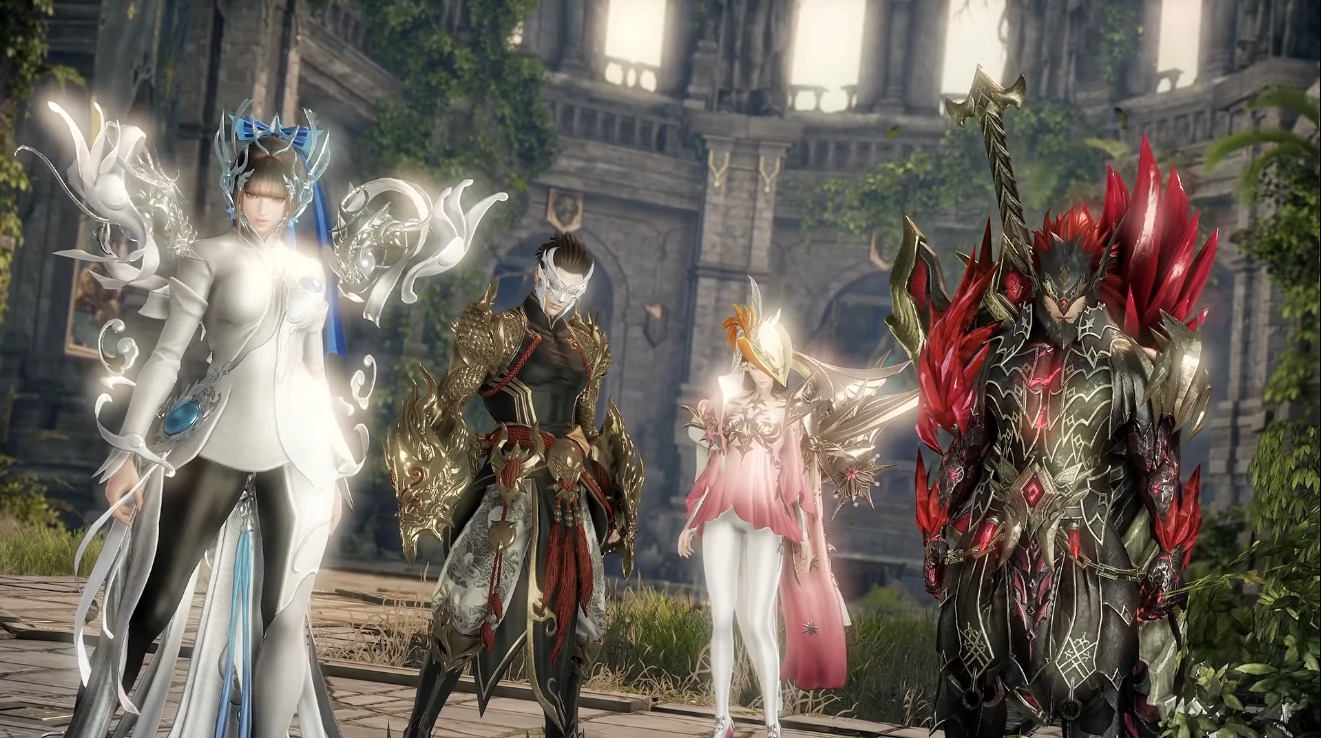 “This would have been a problem in 2012,” he wrote. “Now in 2022, it’s not only bad, it seems as if the folks making this game just ignored the last decade or so of discussions and debates surrounding representation of women and non-masculine characters in games.”

After choosing to play as a Male warrior – one of two gender-locked classes alongside the female-only Mage (with Gunners and Martial artists having gender-locked subclasses at a 3:1 ratio instead) – Zwiezen took note of “how many of the female characters around me seemed to be, uh…lacking pants.” 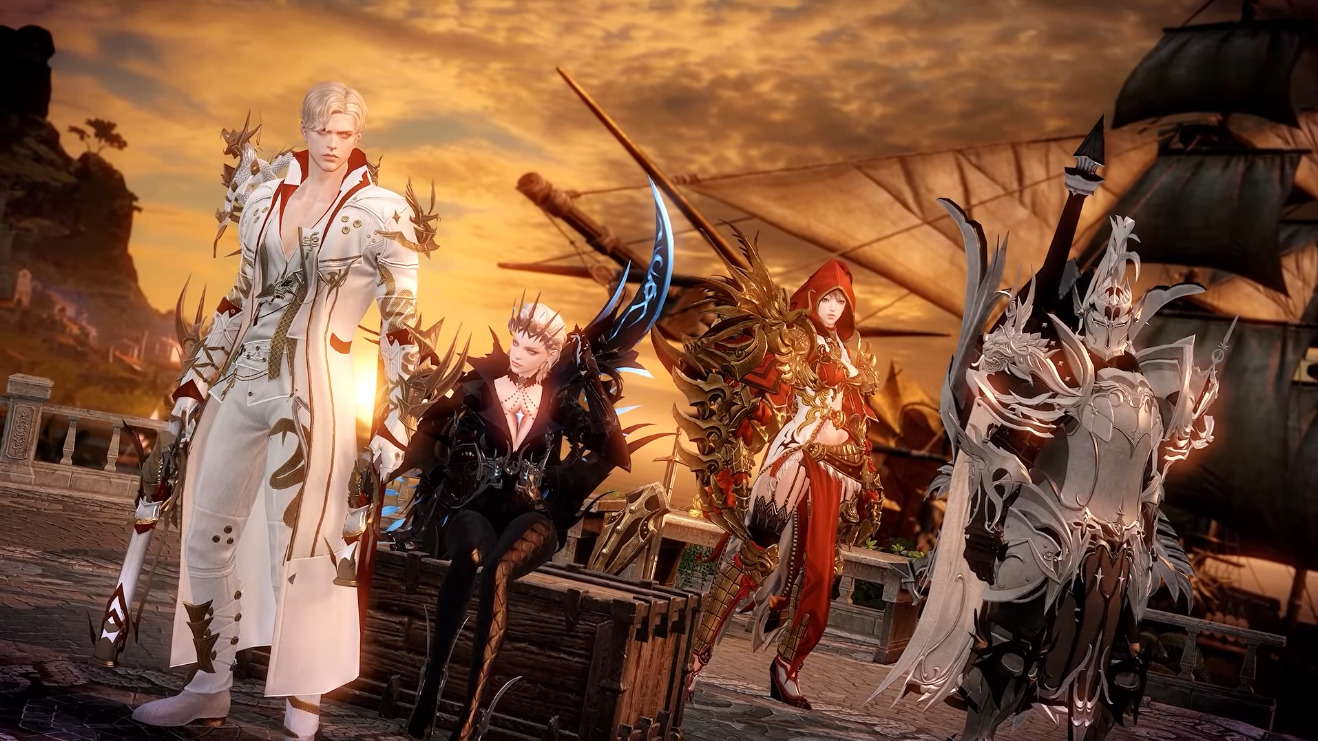 Citing a handful of other Twitter users – such as @shrcksu, who wrote in a now deleted tweet that “It’s really difficult to recommend a game like lost ark when your first armor upgrades wouldn’t be out of place in a sexploitation film” – Zwiezen asserted, “And I’m not the only person who noticed. Other players have pointed out how hard it is as a female character in Lost Ark to find clothing and armor that actually, y’know, covers your body.” 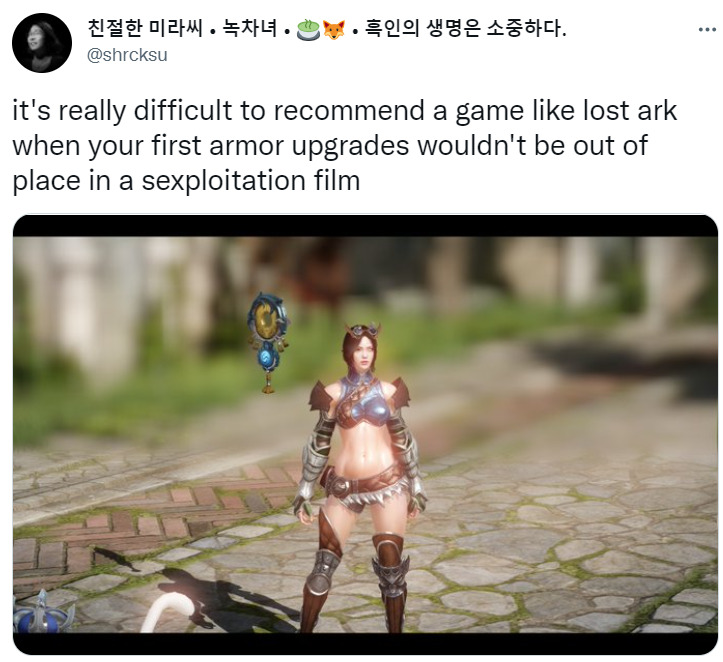 “To be clear, I have no problem with people wanting to wear short-shorts or heels,” he then claimed. “Whatever works for you and makes you feel good, I’m down for it. And I think video games should include options for people who want to wear revealing clothing or super-high heels.”

Continuing, Zwiezen opined,  “However, it’s frustrating that in 2022 we still have to remind game devs and publishers that women might want a choice in how they look.” 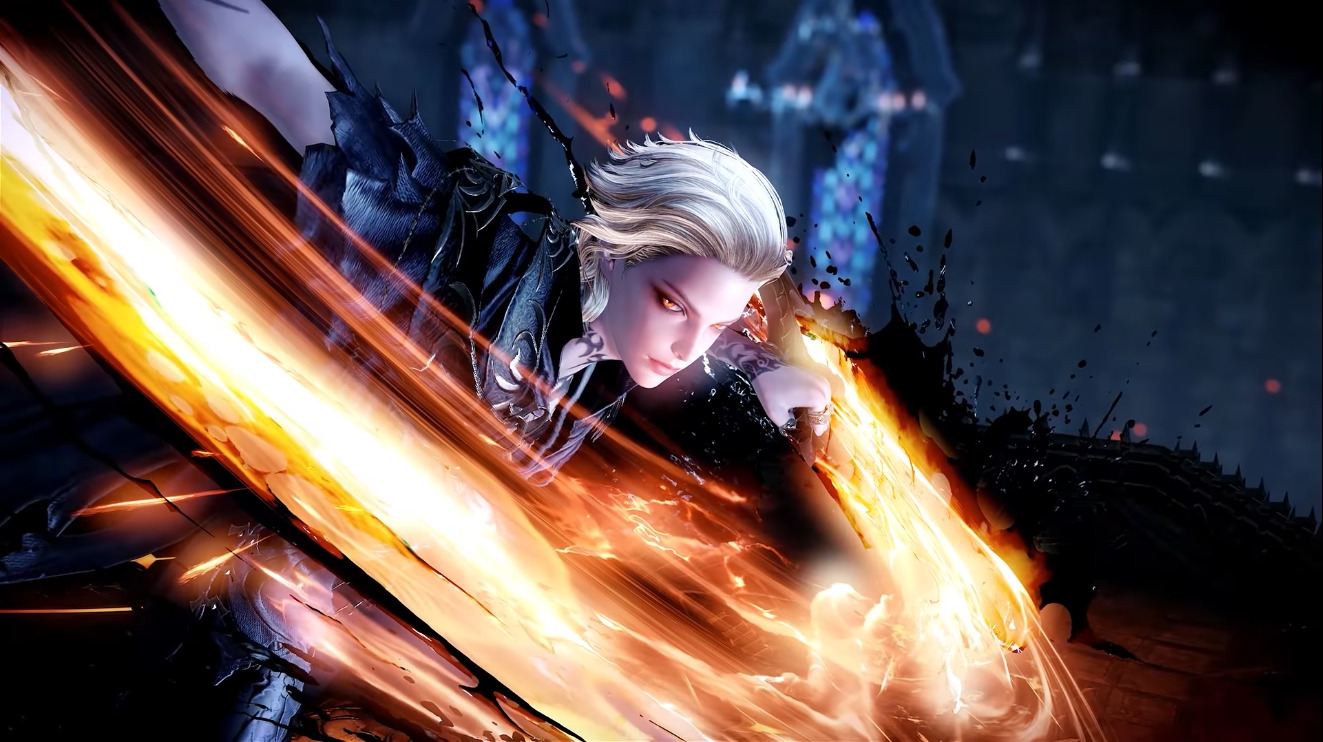 Further attempting to reassure Kotaku readers that he was not shaming them for daring to like alluring character designs, Zwiezen made a “quick aside”, noting that he wanted “to add that if you think heels and shorts are sexy, cool-looking, or awesome, I’m not here to say you are wrong or tell you that your opinion is bad.”

“I’m just asking for more options for more folks!” he insisted. “Imagine the opposite. Imagine if none of the clothes were sexy or revealing. You’d probably be disappointed! That’s how a bunch of folks feel today when loading up Lost Ark.” 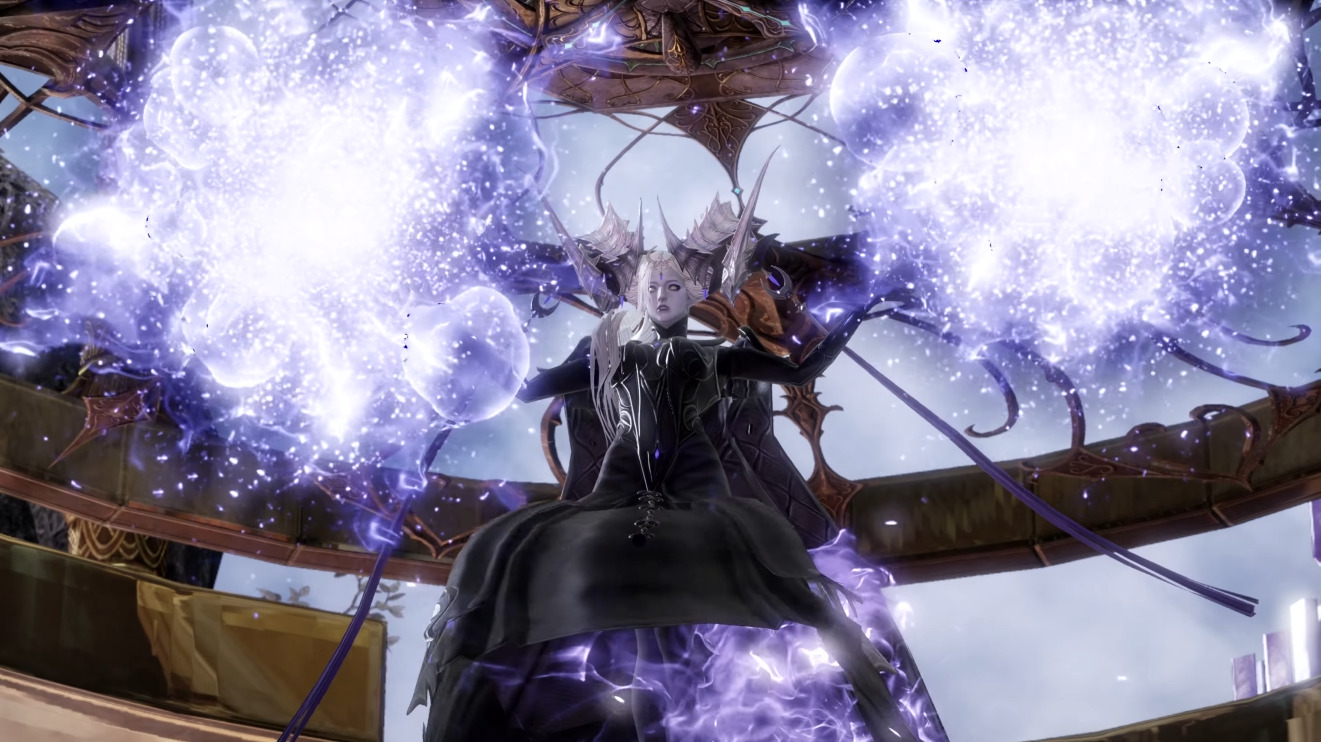 As alluded to above, Zwiezen also took issues with the game’s animations, writing, “even if Lost Ark offered a wider variety of clothing and armor to women, it wouldn’t fix its other big problem with women: all the hyper-exaggerated, fan-service-y animations.”

“Women in Lost Ark have hips that wiggle side to side so much, so quickly,” Zwiezen bemoaned, highlighting a video of a female character’s walk cycle shared by Twitter user @danipanteez. “They look like they fell out of a Source Filmmaker project from a decade ago.”

He then noted, “As has been pointed out by some fans and longtime players, there are definitely some cultural differences between South Korea and the United States/Europe when it comes to how MMOs and free-to-play games are marketed and developed.”

“Still, it doesn’t seem like a big ask to give female characters access to all classes or at the very least a more suitable array of clothing and cosmetic options,” he concluded. “And while I’m happy to hear Smilegate is working to improve the situation it’s 2022. This s–it shouldn’t have been a problem to begin with.” 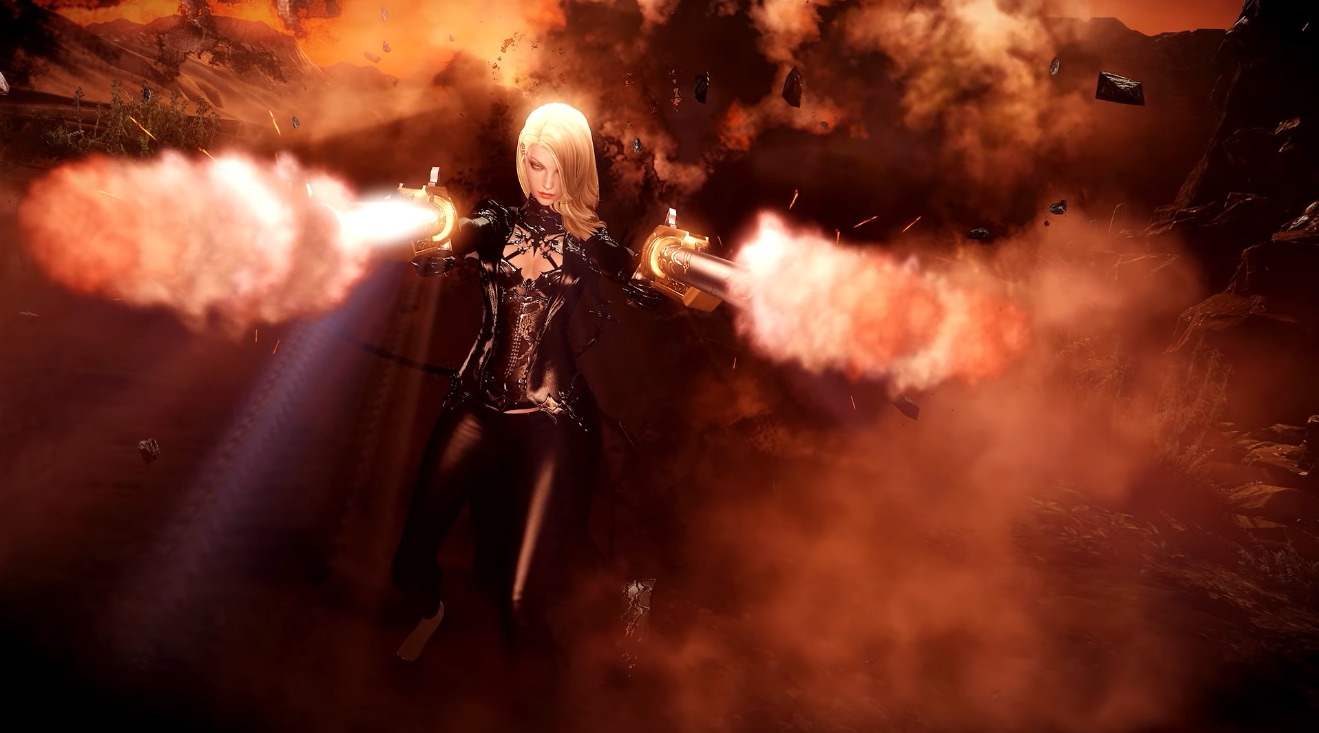 Yet, it seems that for all his concern, Zwiezen may have missed the fact that the game has already been censored in order to avoid offending Western audiences.

In a thread on the game’s official forum, users noted that “a lot of outfits censored, changed, remodeled or replaced,” finding that while the costumes were untouched in Russia and Korea, gear featured on the Lost Ark’s EU and North American servers- where Amazon is responsible for publishing the title – had been edited to be less revealing, with some starting gear being changed entirely.

As seen in a series of images collected by user TanabeKyou, such changes included entirely remaking two of the Martial-Artist’s outfits; eliminating a plunging cleavage in one, and entirely covering the character in leather and armor for the other. 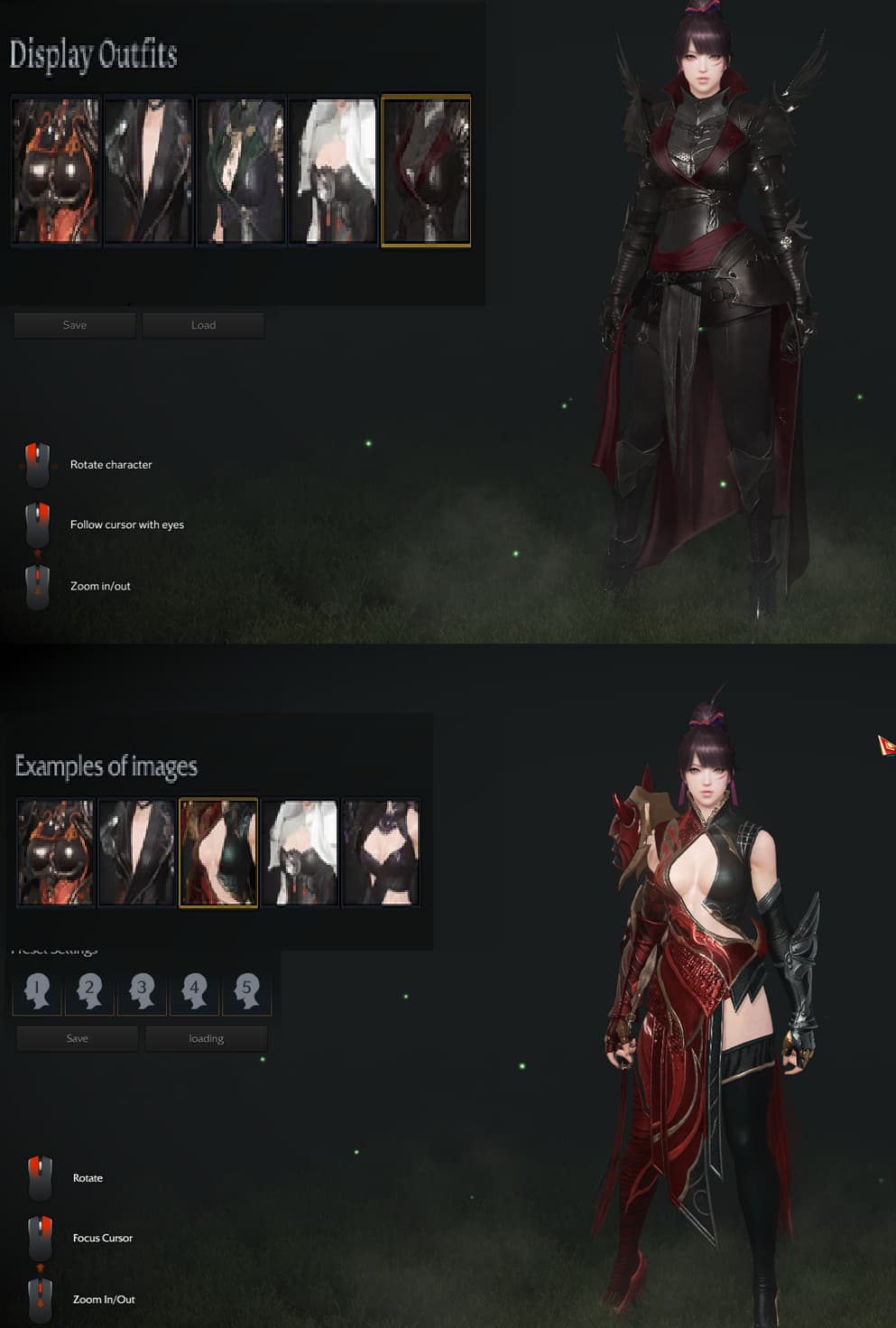 Other gear of the martial artist was also censored, with her underboob covered in in-game artwork: 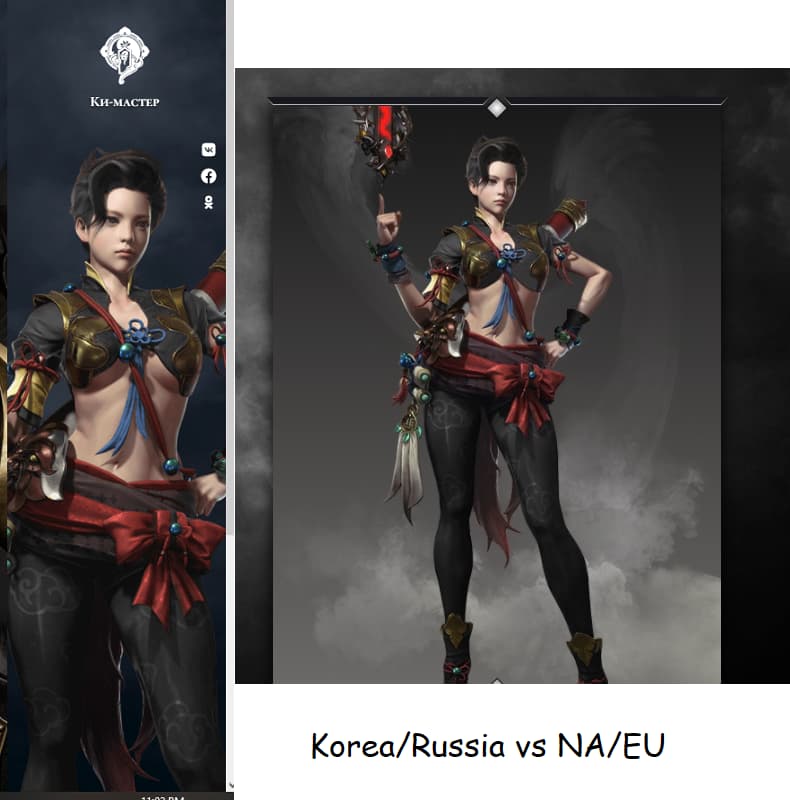 Likewise, the Assassin lost her thigh-high boots and cleavage in her starter gear, with only her arms being exposed in the censored versions: 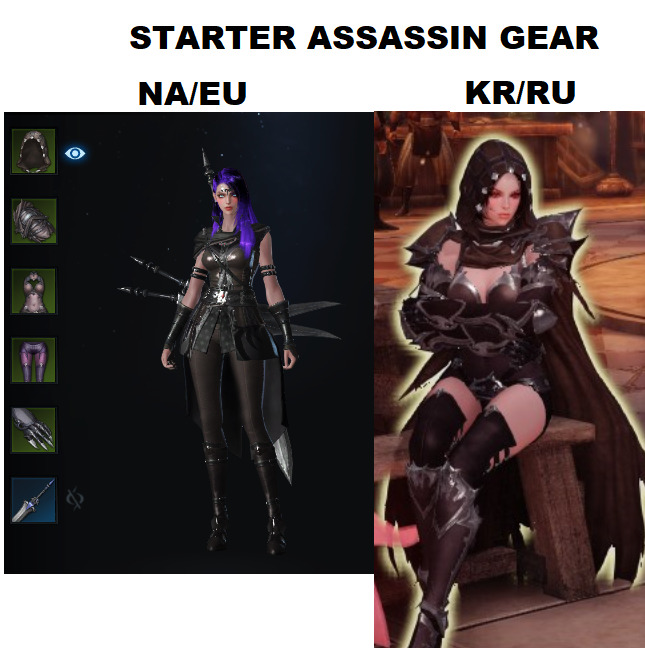 The Mage starting gear was almost entirely reworked, with the Western release adding tights, jewelry to cover the chest up to the neck, and even smaller details being entirely remade to the point it was an entirely new outfit: 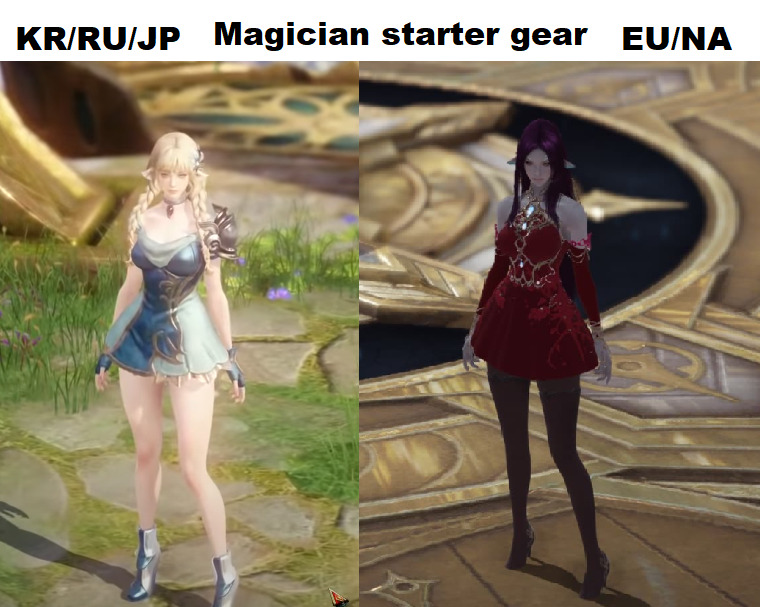 While other trailers had shown the Martial Artist’s potential for hip and leg exposing outfits, NA/EU players found that the class’ cheongsam-inspired starting gear was exchanged for a head-to-toe leather outfit that almost looks more fitting for an Assassin. 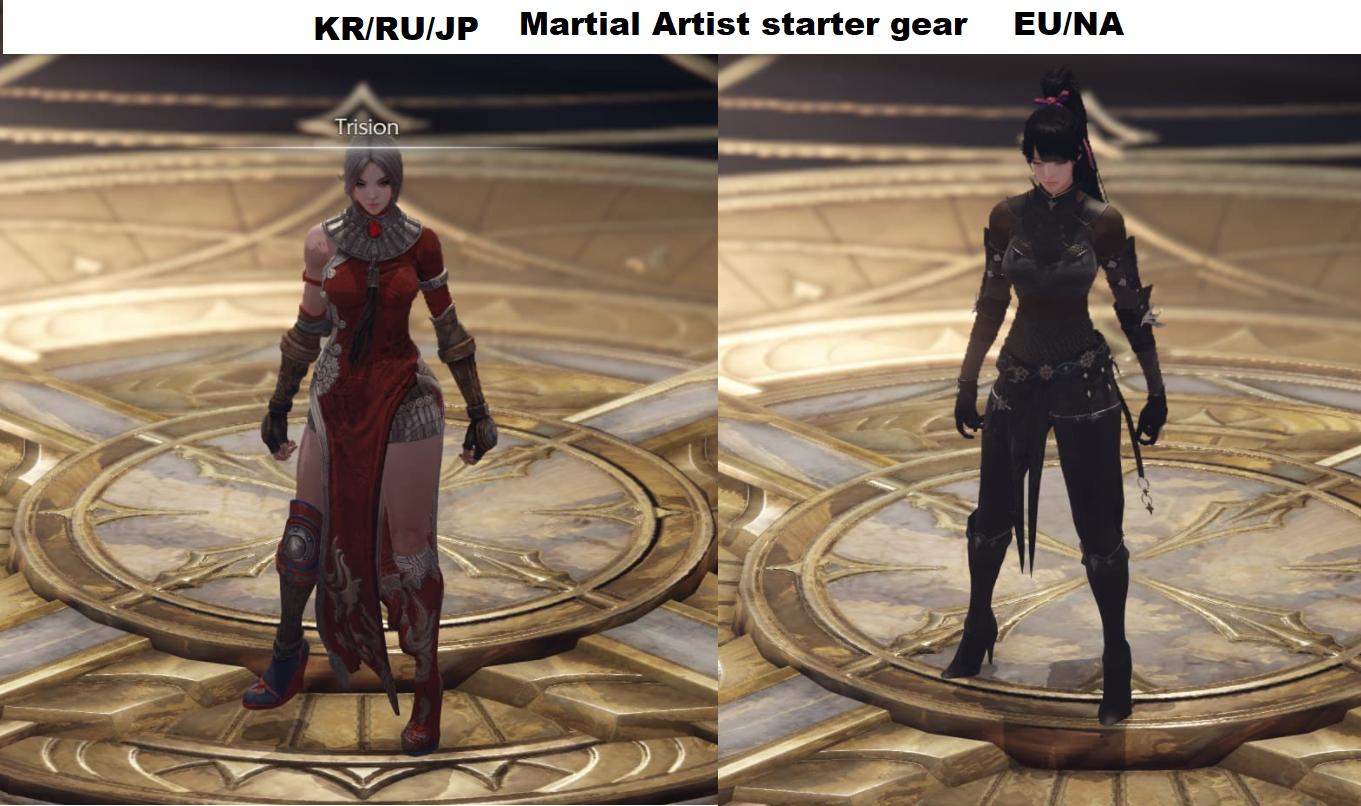 In fact, not only were Lost Ark’s sexy outfits changed in order to preemptively head off such outrage, but a number of its NPCs were also given darker skin, ostensibly to similarly avoid the inevitable charges of racism.

These instances of ‘blackwashing’ were applied to such characters as the Sorceress: 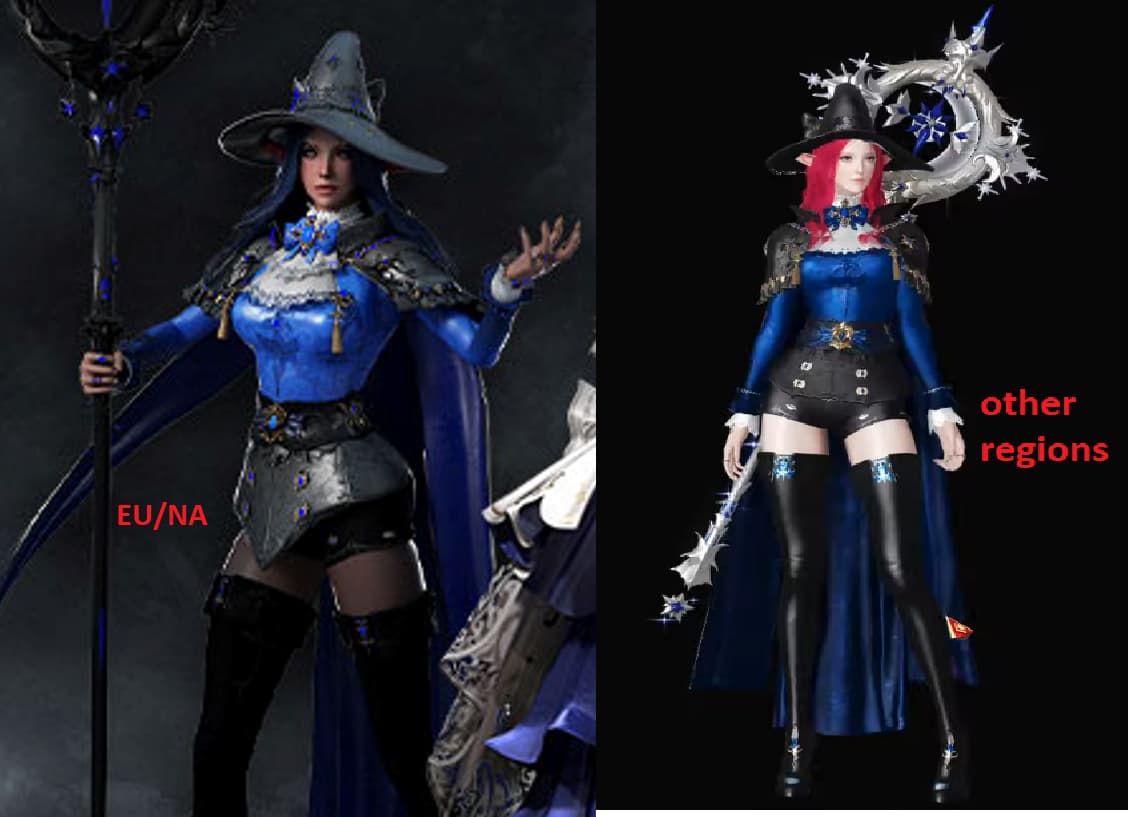 and, in a move that made her look like she was made of porcelain, Ezrebet:

YouTuber LOWE also notes that a number of Lost Ark’s pre-set character creation faces and face shapes have been replaced on Western servers with a separate set of black- and dark-skinned presets: 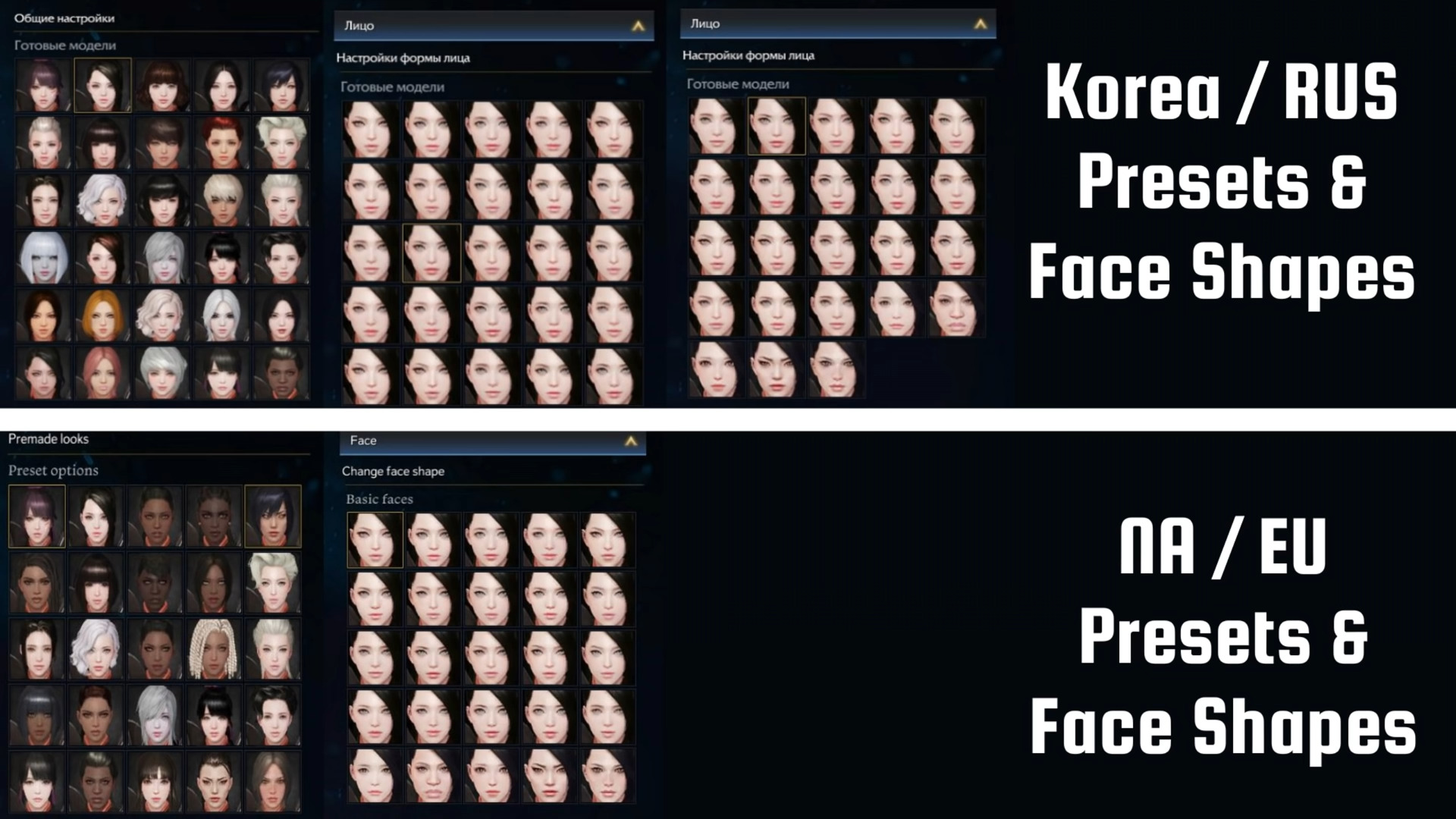 When a number of these censored outfits were first discovered during the game’s 2021 NA/EU beta test, community Manager Roxx claimed to concerned users that the “original outfits have not been removed, they are just not as front and center and we have added in additional options for players.”

In a since-deleted response to one such user on the game’s Steam forum, Roxx allegedly further explained, “My answer is the same, and this has been answered many times. No outfits have been removed or censored. They starting outfits are slightly less sexy.”

“The sexy outfits that are no longer starting outfits are white drops,” they added. “You can get them in-game, just the same as they are in the other regions.” 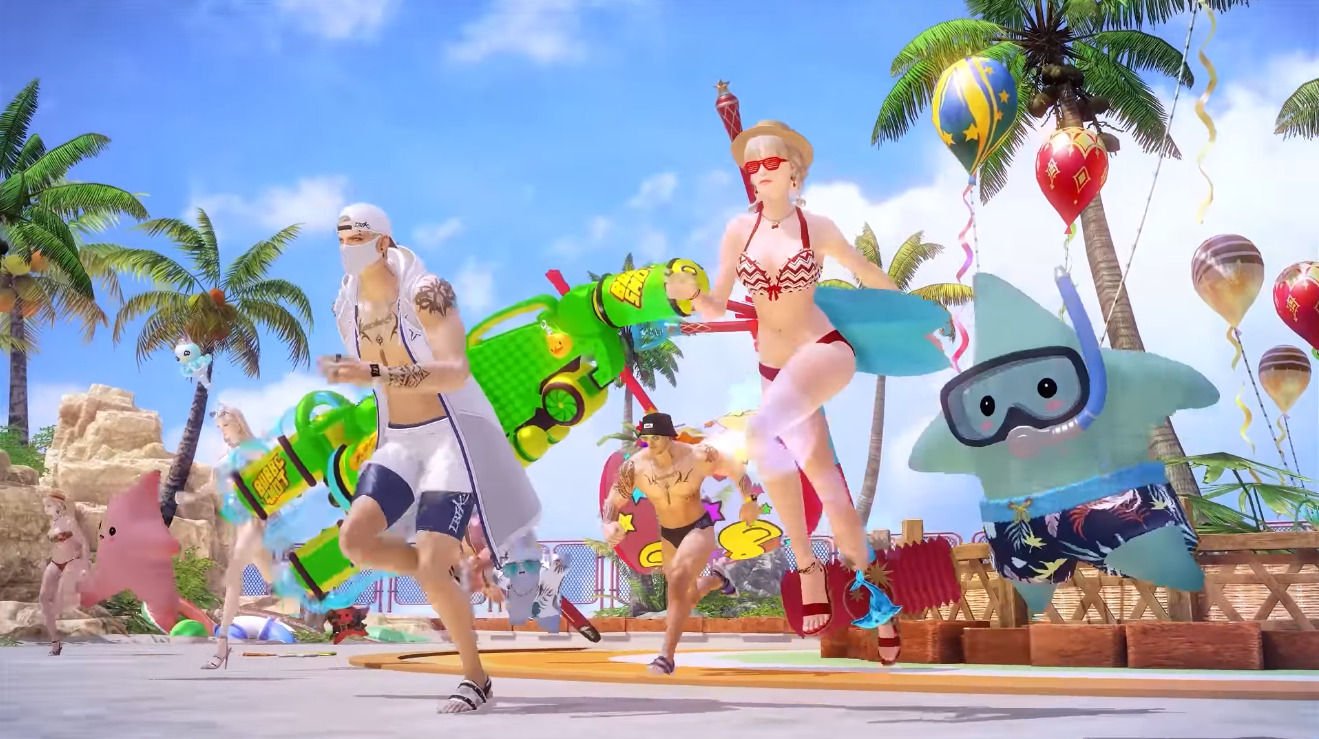 In regards to the game’s gender-locked classes, the developer Smilegate RPG acknowledged in a December 2nd, 2021 blog post that more “male and female counterparts” would be brought to the game at a later date.

“From the earliest days of Lost Ark’s announcement in the West, we heard players’ feedback about gender locked classes loud and clear,” they wrote. “While not every class in the game currently has a male and female counterpart available, we wanted to be sure to include those that do early on. In the future, Smilegate RPG will be creating more counterparts for classes that are still gender locked, and we will bring these to Arkesia in time.”

Nonetheless, such complaints over Lost Ark’s oversexualized character designs haven’t stopped it from becoming the most played game on Steam within a week of its launch, with a 24-hour peak of 1,090, 741 and an all time peak of over 1,324,761 million at the time of this article’s writing. 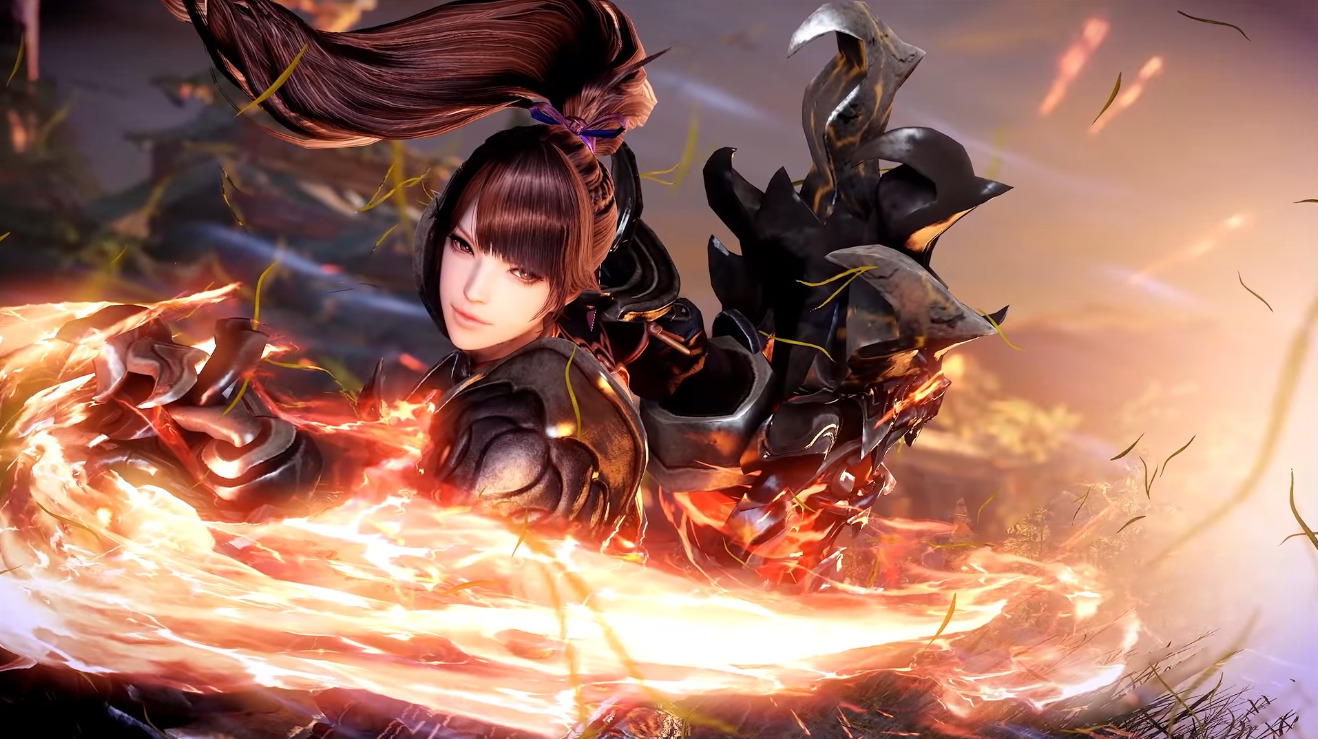 Given that the game was already altered in anticipation of Western outrage, Lost Ark’s censorship begs the question: How will further feedback from players and journalists be taken?

And, given how it seems it’s been overlooked in favor of outrage at sexy outfits, were the game’s efforts at ‘diversification’ to avoid such controversies ultimately worth it? 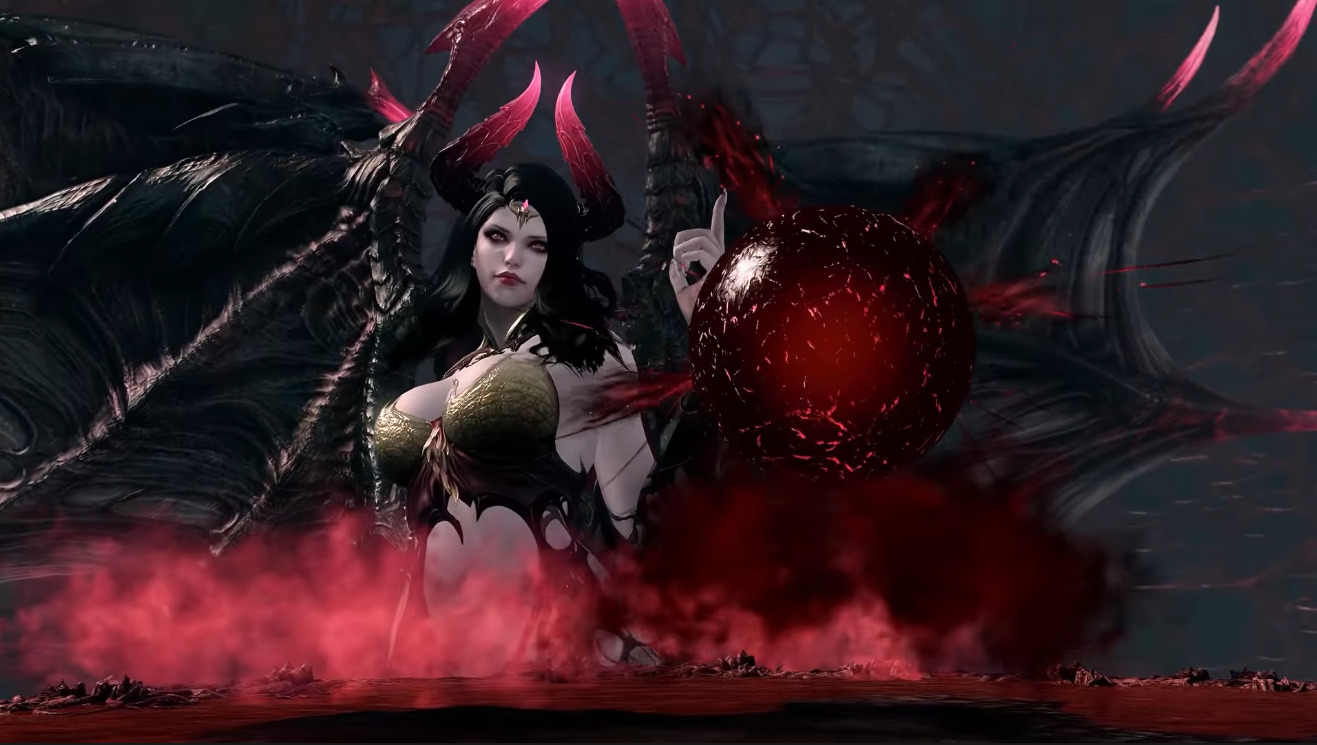 NEXT: Mystery Horror Title Martha Is Dead Will Be Censored On PlayStation, Leaving “Some Elements No Longer Playable”