In an attempt to discuss the philosophy of NPC treatment in video games, God of War director David Jaffe recently asked whether, hypothetically, players would be willing to kill a nightclub filled with “minority NPCs” for “an easy, automatic platinum PS trophy.” 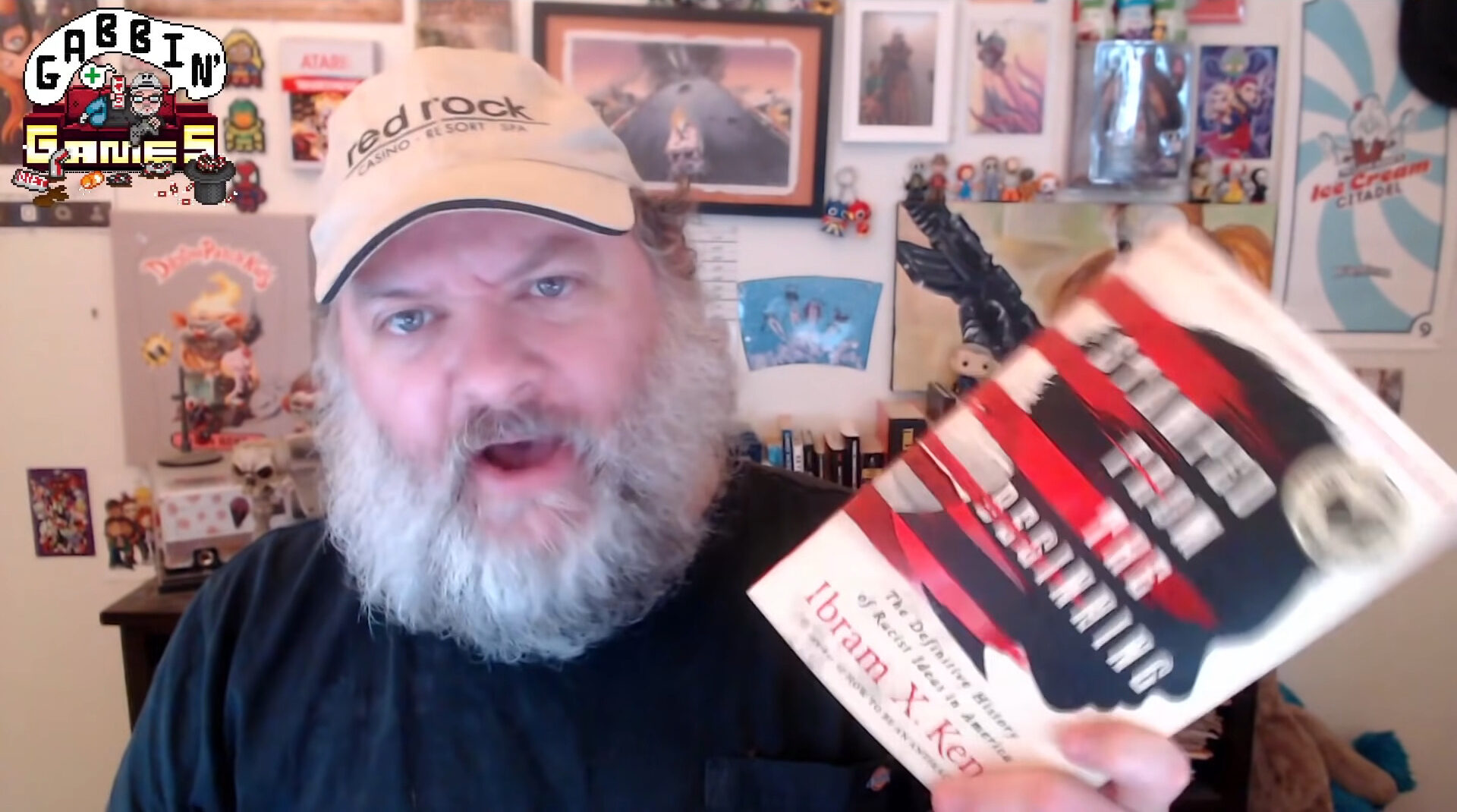 Jaffe put forth this question on February 22nd, opening a poll on his Twitter account to solicit Yes or No answers from the general public and asking, “Hypothetical: If you were playing and loving an open world game and there was an easy, automatic platinum PS trophy for going into a minority filled (Jew, black, LGBT, Muslim,etc.) nightclub and killing all the minority NPCs, would you do it?” 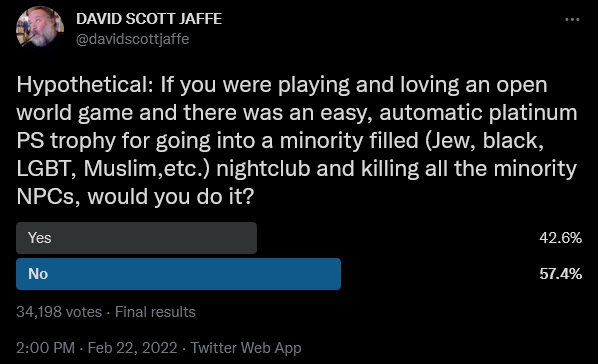 Asked near immediately by numerous fans why he would make such an inquiry, much less in a way that referenced both the Pulse nightclub shooting and general hateful rhetoric, Jaffe explained, “I would ask it because the older I get, the less I see NPCS as just game board pieces and I go out of my way to be kind to them.”

“Also: It’s a question for today’s stream and I wanna see what the majority would do (or say they would do),” he added. 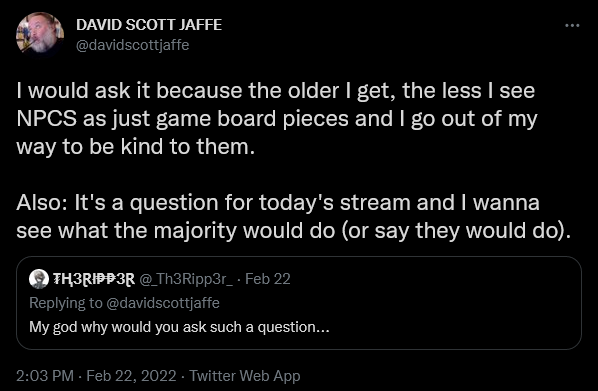 However, his explanation would do little to stem the tide of backlash coming his way, as the video game designer’s hypothetical soon drew the ire of not only numerous social media users, but in particular, members of the video game press. 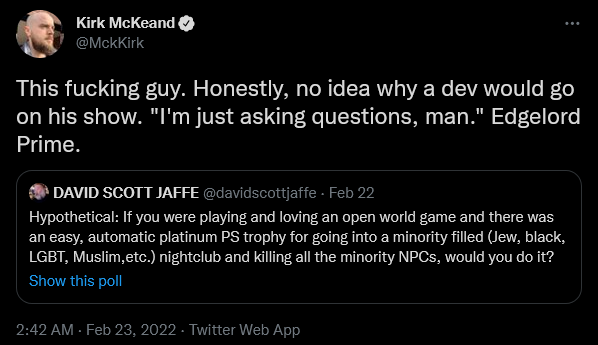 “It was an honest question,” replied Jaffe. “Because when I was younger, I would have been all over ANYTHING in a game (that was not real world). And I still support the right for it to exist, but now that I’m older I go out of my way to not even harm NPCs. That’s what we were discussing.” 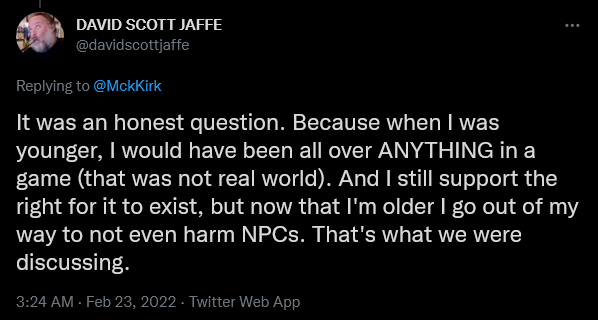 McKeand responded, “You could have made that point without making it about minority folk being killed in a nightclub, which is a thing that happens. ‘Would you do something you’re morally opposed to for a Platinum Trophy?’”

“I could have but that wasn’t the conversation we were having,” countered Jaffe. “I posed the question in a way I felt would cause the most anguish among those who are ambivalent because I am not: I would NEVER do that even to NPCS.”

Taking note of McKeand’s initial tweet, PC Gamer features producer Imogen Mellor asserted, “I’m going to point at this tweet every time someone asks me why there aren’t more diverse people in games. There is unwelcoming, and then there is this.”

“And I’ll point to this every time someone points to game press and goes ‘why are they so full of themselves?’” Jaffe fired back. “You don’t know me or my politics. The whole point of this question was to discuss how we square doing awful things in games(if you do them) vs. our own internal morality.” 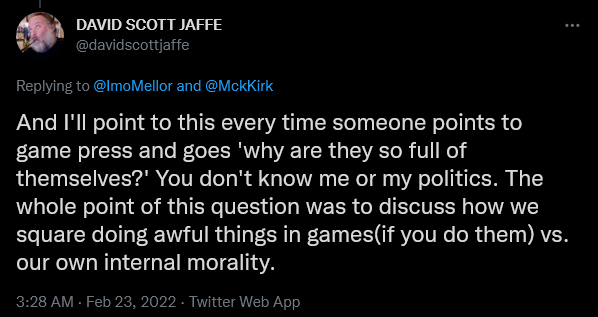 He continued, “As for unwelcoming, what a load knee jerk horses–t. I spent an hour on my show yesterday defending the valid and important theory that Bloodborne may actually BE an allegory for what it’s like to be trans. Again, you don’t know me. Before you publicly insult someone, perhaps.” 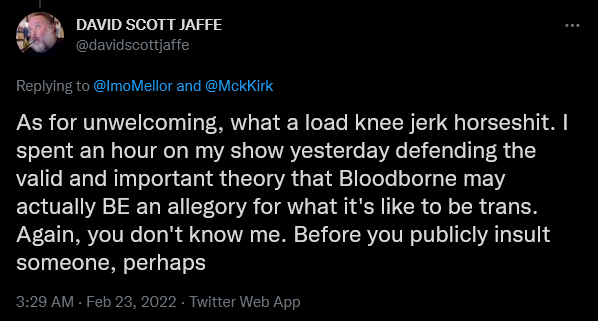 The conversation was then joined by Gamesindustry.biz news editor Danielle Partis, who told Jaffe, “Perhaps people simply do not want to debate the ‘morality’ of murdering versions of themselves for digital accolades. That doesn’t make someone ‘full of themselves’ ya div.”

“Sure but I don’t follow them and they don’t follow me,” said the video game designer-turned YouTuber. “I was asking MY followers for MY stream. These guys are the ones who retweeted it (and/or commented on it) with a judgy comment.”

“Whatever you put on a public platform is subject to public criticism, and what you said was absolute bait to incite the wrong people,” she replied. “‘Should we shoot minorities for the sake of it’ isn’t a conversation that people need to have. Say stupid s–t online, you’re gonna get judged.” 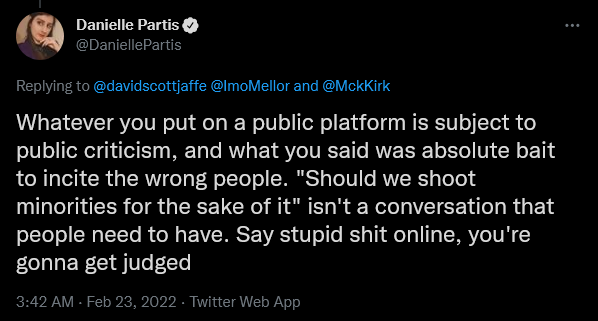 “Who are you to tell others what conversations they need to have, tho?” Jaffe asked in turn. “I wanted to have the conversation. As for being judged, I get what you are saying. But it would be nice if people- especially JOURNALISTS- reached out to get some context before publicly going after someone.” 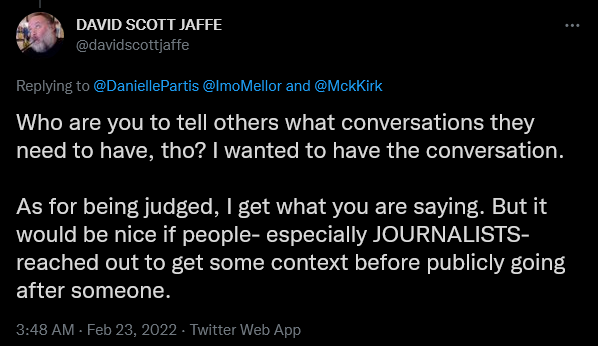 “No one’s saying you can’t have it mate, do what you want,” said Partis. “Having it publicly leaves other people free to tell you that it was daft and unnecessary, and potentially harmful. Why should minorities patiently seek context about hypothetical violence against them?”

“General human minorities? I have no issues with that and with hoping they will let me explain,” Jaffe elaborated. “JOURNALISTS tho? Come on…I don’t even have a journalism degree and I know to get context before publishing an attack on someone.”

“A tweet from a personal account that says theorising violence against minorities isn’t ‘publishing an attack’ is it, c’mon,” reasoned Partis. “Even if you did pose the question harmlessly, you have to own that it didn’t land as intended to the people it is discussing.” 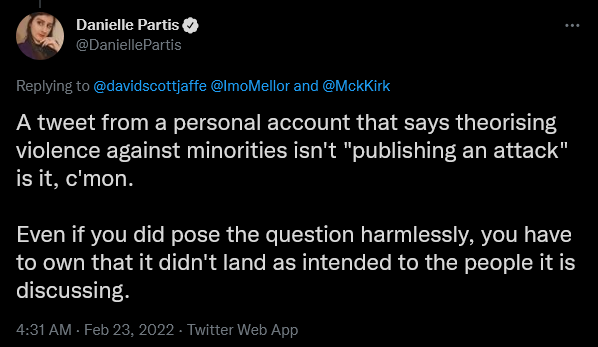 “Again, I am ok if you don’t like the tweet,” conceded Jaffe. “I’m not ok with how Kirk and some of his colleagues went about expressing their take on it given their credentials and/or experience and/or training.”

“Are journalists not allowed to express their opinions on public forums in the same way you do?” questioned Partis.

“Of course they are,” said Jaffe. “But in the same way I would expect a doctor to know better than giving medical advice to a stranger over twitter, I expect a journalist to not attack someone w/out getting their facts first.”

Ultimately, Jaffe published a video to his YouTube channel titled “Game Journalists Attack Me Over My Tweet…,” wherein he proceeded to reiterate both his defense of his question and his issues with the above video game journalists.

What do you make of Jaffe’s question and the subsequent public response to it? Let us know your thoughts on social media or in the comments down below!

NEXT: God of War Creator David Jaffe Claims Kratos Is Bi-Sexual Then Quickly Backtracks Claiming It Was a “Lie”