DC Comics and writer Tom Taylor’s gay Superman book, Superman: Son of Kal-El completely fell out of the Top 50 sales charts for the month of February. 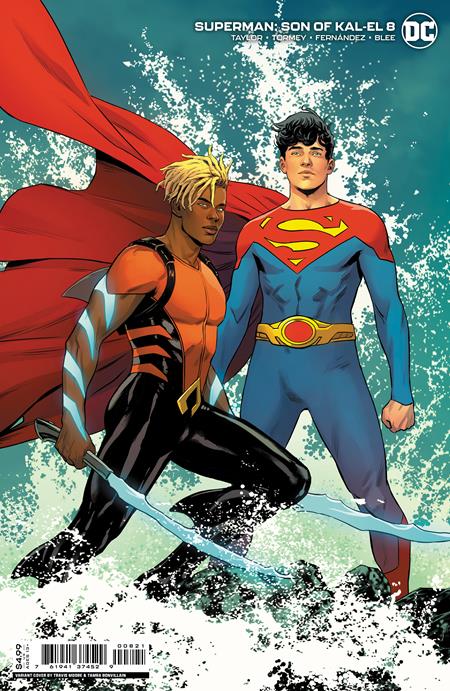 Taylor has consistently attempted to defend his book’s sales, albeit without providing any numbers, but the reality of time continues to prove his assertions simply aren’t true.

Back in February, he attempted to defend the book’s sales, but actually confused the book’s placement on the sales chart in November to the issue of the book.

As part of a lengthy thread on Twitter, Taylor wrote, “Wait. Issue #6 didn’t even appear in December sales? What?!” 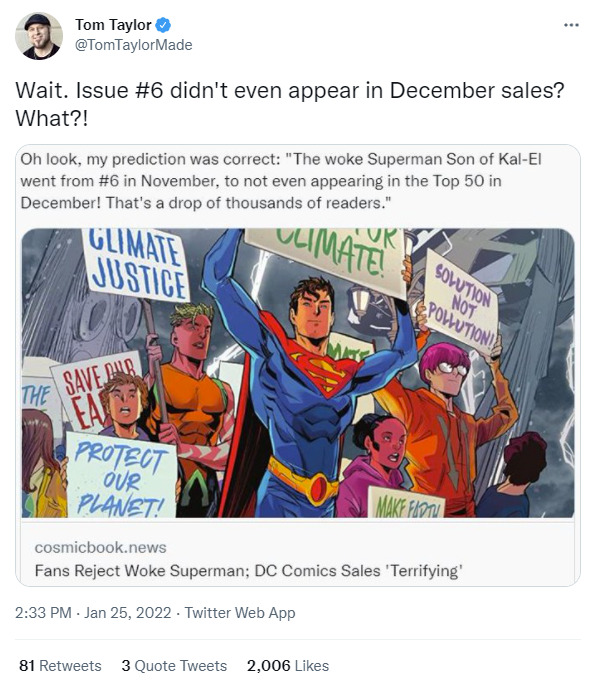 The fifth issue of the book, where Superman gets a boyfriend, was in fact the sixth top selling book on ICv2’s chart. As noted by ICv2 the charts “are unit and dollar sales rankings based on sales tracked at point-of-sale by the ComicHub system at stores selling American comics around the world.”

Taylor even bragged about the fact it was in the Top 10 as part of his thread writing on Twitter, “Now, this was pretty confusing. I don’t believe a story’s worth is measured by its sales. But our Superman is selling pretty well. Issue #5, where Jon Kent comes out as bisexual, made the Top 10 in comic sales for November.” 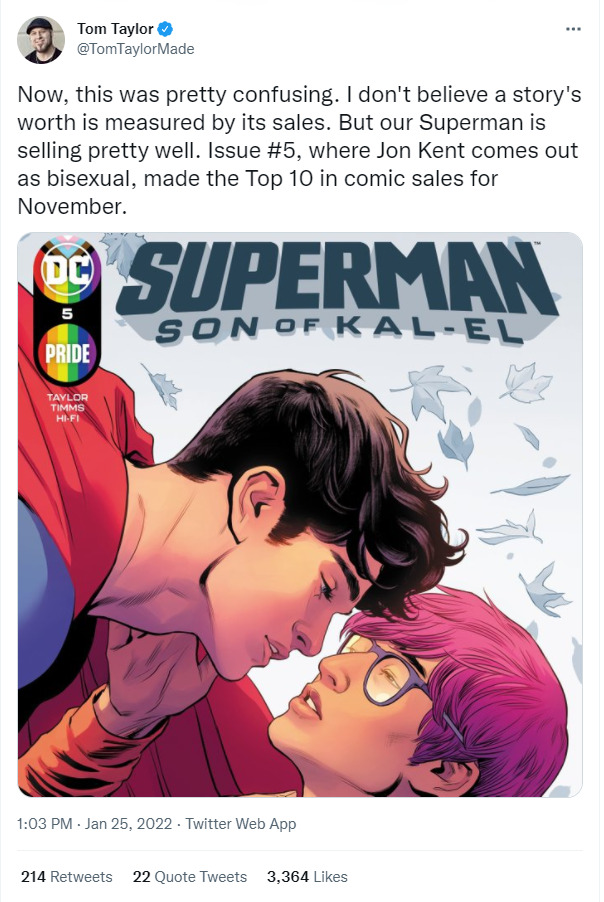 However, getting back to Taylor’s gaffe, the book’s sixth issue didn’t release until January so it wouldn’t be on the December sales chart.

The book’s annual did release in December and it did not show up in the top 50 chart when looking at total units. The annual did place 45th on the Top 50 Comic Books by Dollars chart. 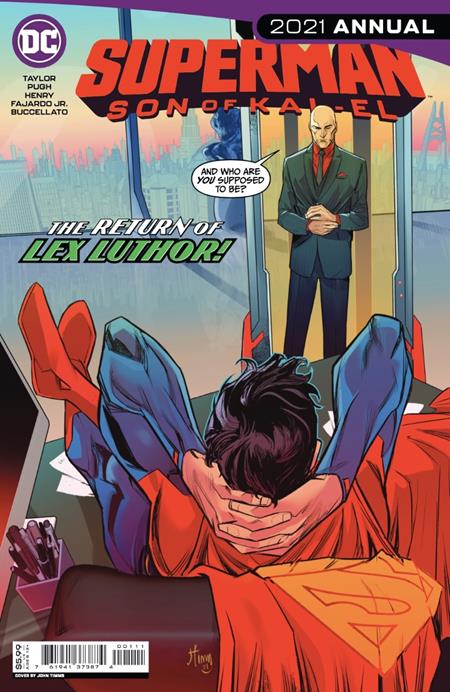 When the book’s sixth issue did come out in January, it was at the bottom of the charts ranking in 42nd place on the unit chart. On the dollars chart it was in 50th, dead last on the last.

Taylor, who previously bragged about his book placing in the Top 10 of the ICv2 charts, went after the data aggregator implying its data is no good or not to be trusted.

He wrote on Twitter, “The people oddly obsessed with our Superman sales are misrepresenting things using a chart from only 100+ comic stores.”

“The same chart that reported my Dark Ages outsold King Spawn… the biggest-selling comic of 2021. People reporting this don’t have facts, only an agenda.” 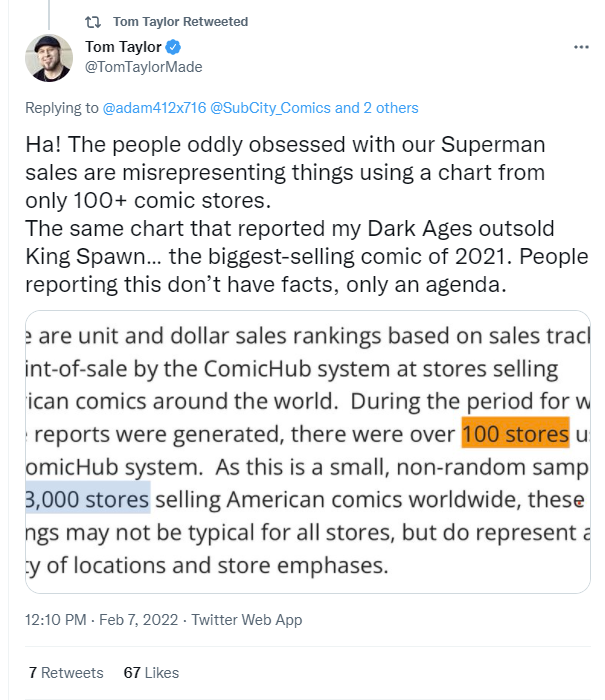 As a reminder, Taylor is the one who could simply post sales numbers, but he refuses to do that.

Nevertheless, this data point seemingly indicated that Taylor and DC Comics’ editorial decision to make Superman gay was a one and done gimmick and that it might have actually driven away readers of the series.

That assumption got another piece of evidence this month as Superman: Son of Kal-El #8 did not even show up on either of the Top 50 charts. 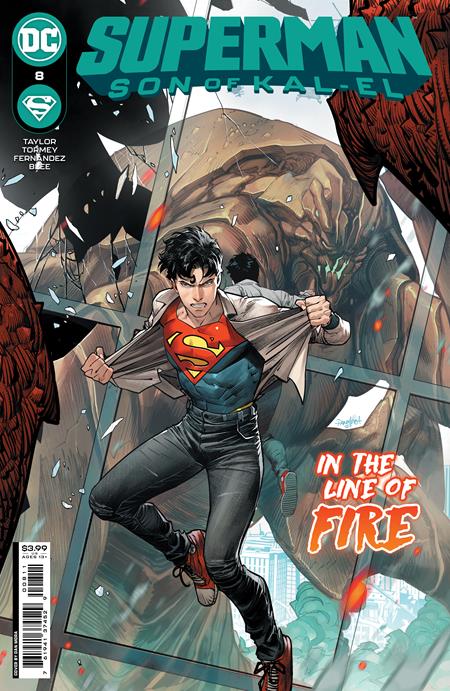 Despite the book falling out of the Top 50 completely, Taylor is still playing games claiming the series is selling well.

He shared a screenshot from Amazon, which updates their sales charts every single hour showing the book in the top spot for a category titled 45-Minute Comic & Graphic Novel Short Reads. 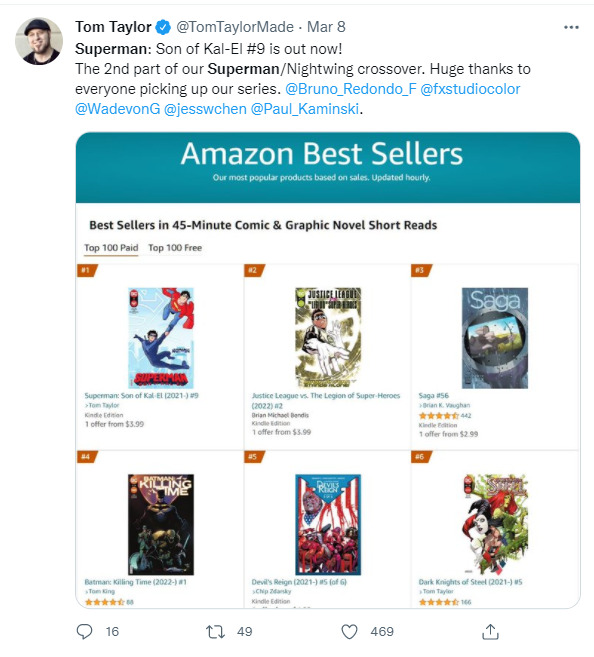 As of writing the book is not even 1st in that category. It’s currently 8th. And this chart doesn’t show you how many books are being sold either. So while it might be 8th, the total sales could be below 100. Of note, it’s also Wednesday and new DC Comics come out on Tuesday, so the book is also more likely to have more recent sales given the way Amazon updates their charts. 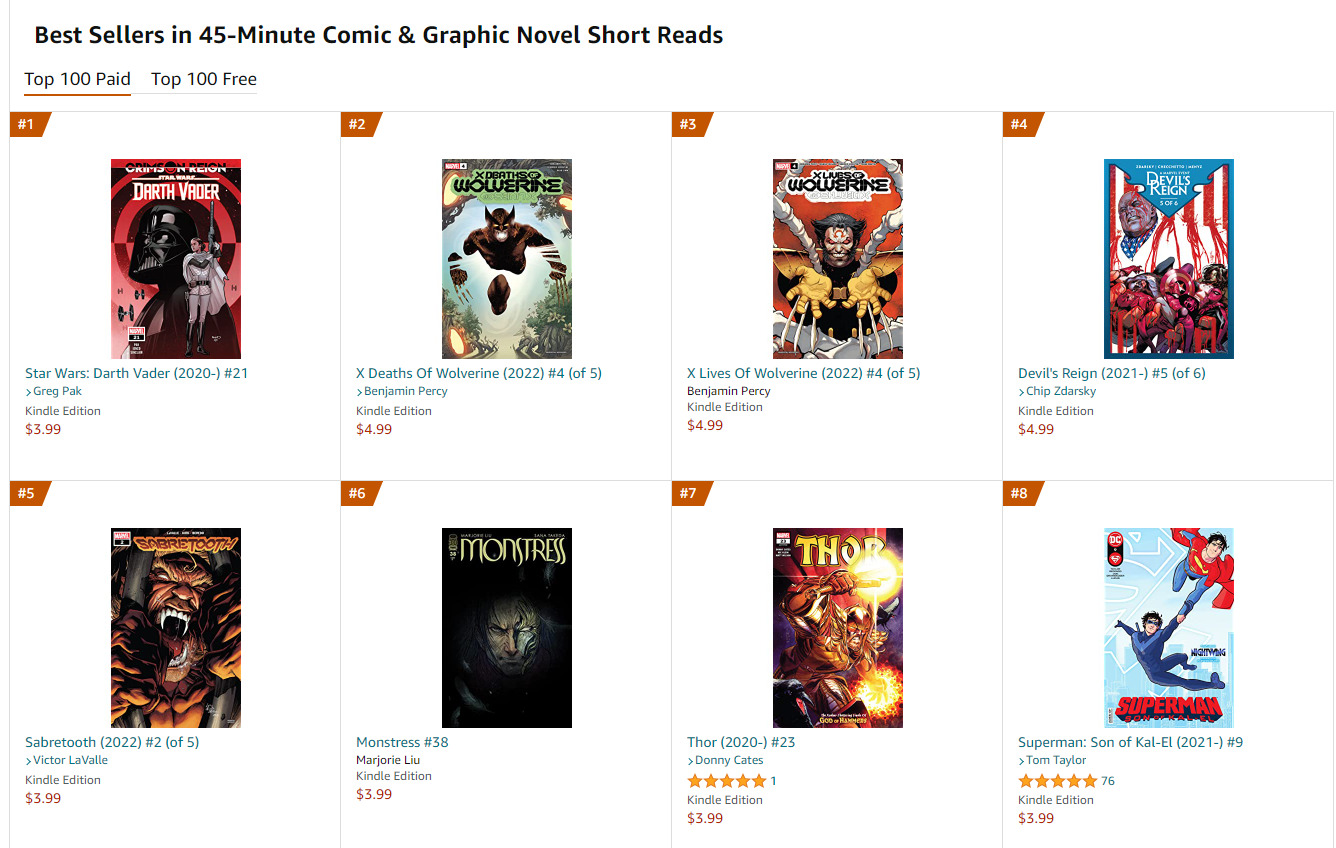 He then shared a screenshot from Comicbook Roundup showing critic and user reviews.

He wrote, “And thanks to everyone reviewing, supporting and spreading the word about Jon Kent and our #Superman series. Means the world. (Got a quick screengrab before the usual review bombers come into the user rating section).” 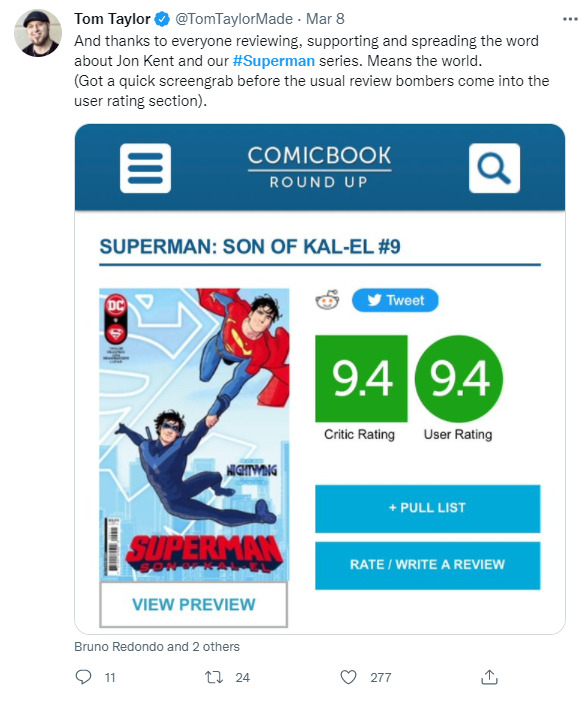 However, the book only has 8 critic reviews. So even critics aren’t reading the book. And the book’s user score now sits at 77. It only has 25 reviews. This is another clear example that it’s Taylor who has the agenda.

Taylor continued to push his narrative the book is selling well writing, “With the strange misinformation being spread about #Superman: Son of Kal-El sales, this is especially nice to see today. Great to see #9 up there with the bat-classics, considering The Batman is in cinemas. Thanks from our whole team.” 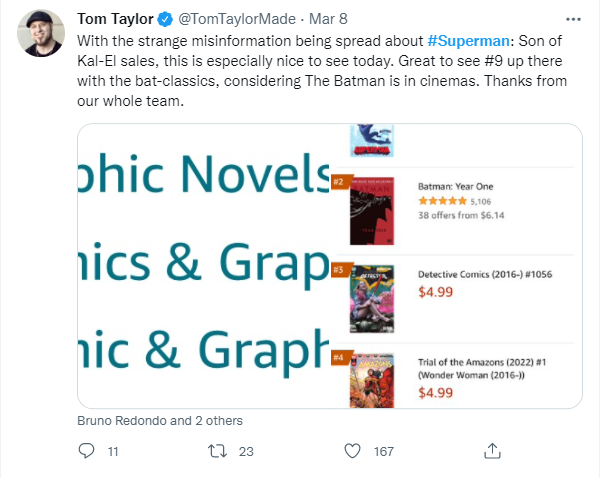 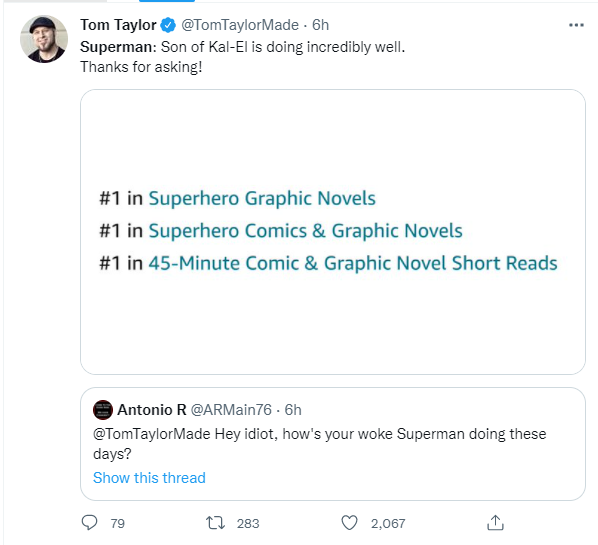 However, as noted these are Amazon charts and they don’t give you a full picture of how the book is selling. Clearly, readers buying physical books are checking out.

And that was a trend dating back to November 2021 when the book’s fourth issue reportedly only shipped 37,200 copies to comic shops. The first issue only reportedly shipped 68,000 issues in July 2021. Comichron has not released estimates past November. 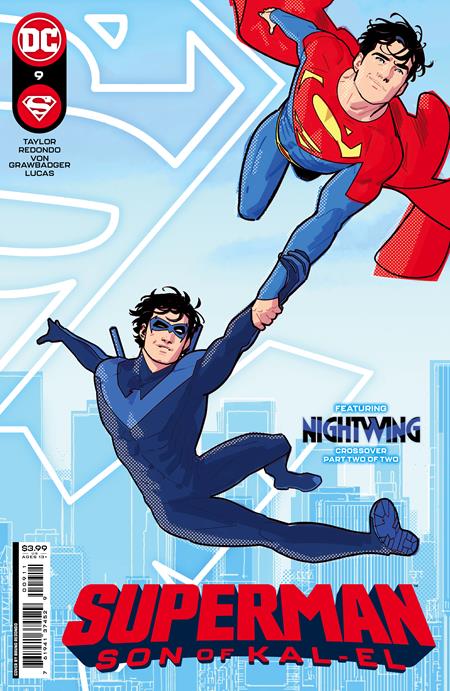 To conclude, if the book is selling so well as Taylor claims all he has to do is release the numbers, but he’s not doing that, and that’s the real story isn’t it?