There is a rumour doing the rounds lately that claims Hollywood actor Bruce Willis, best known for his role as John McClane in the Die Hard franchise, may be suffering from on-set memory loss on account of dementia.

Furthermore, allegations suggest that during the filming of his recent movies, Willis, 66, is being fed his lines through an earpiece.

Rumours about the actor battling dementia have actually been circulating for quite a while now.

In January of last year, an unnamed insider told OK! Magazine that Willis had been “waging a personal war” with a condition that had been affecting his memory “for a number of years”.

“Those close to Bruce have been helping him out, and trying to maintain the secret, but this helps explain why he might have not been wearing his mask — he simply forgot,” another insider pointed out, alluding to an incident in early 2021 that saw the actor being kicked out of a Rite-Aid store in Los Angeles for refusing to wear a mask.

At the time, however, Page Six reported that Willis had ‘refused’ to wear a facial mask inside the Rite-Aid store in Los Angeles, detailing that the Sixth Sense star had been asked to leave after people inside the shop became upset with the actor’s decision not to cover his face.

OK! Magazine’s insider also reported that due to Willis’ condition — which has not yet been officially confirmed by neither the actor nor his family —he had allegedly begun wearing a earpiece to help him remember his lines across his various film projects.

“While filming Glass, staffers worked around him by cutting and editing and having him overdub lines because he struggled to remember and/or deliver them,” claimed the source. “In most scenes on Glass he’s hooded, and they used stand-in and body doubles to replace him. On set, he wouldn’t smile and was always chaperoned by an assistant to guide him while walking.”

The source further explained, “The good news is that although there is the real concern of dementia fears, it largely has not impacted his ability to work in Hollywood — and in true super hero form — he won’t slow down because new technology like ear pieces allows actors of his caliber not to skip a beat.”

YouTube channel Red Letter Media touched on this topic in a recent episode of their Half in the Bag series titled ‘The Bruce Willis Fake Movie Factory,’ wherein host Jay Bauman pointed out how Willis could be seen wearing an earpiece in the movie Apex.

At around the 23-minute mark, Bauman asks co-host Mike Stoklasa whether he noticed the earpiece whilst watching some of Willis’ most recent movies, before explaining that he actually did some research and found out that the actor had lost most of his hearing in his left ear.

“I noticed in one scene, I saw an ear little thing in his ear, and my first thought was ‘Oh my God, they’re just feeding him his lines.’ So then I did a little bit of research and I discovered something about Willis I didn’t know,” said Bauman.

“He is like 75% deaf in his left ear from a gun going off right next to his head when he made the original Die Hard,” He then explained. “So then I was like, ‘Oh, well, you know, he’s got a hearing aid, I’m not going to make fun of him for that,’ but then I noticed in some shots it was there, other shots it wasn’t…so it’s a continuity issue.”

“But that’s his left ear, and also in Apex, and other movies, he has a little ear piece in his right ear as well,” Bauman pointed out, concluding that “somebody’s feeding him lines.”

The first reports pointing to Willis needing an earpiece to get through his lines came in November of 2015, when The New York Post’s Michael Riedel noted that the actor was sporting “an earpiece the size of a cellphone circa 1984” during his performance as Paul Sheldon Broadway’s adaptation of Stephen King’s novel Misery.

“He’s only 60, a spring chicken in Broadway years,” wrote Riedel.  “Spies who’ve seen it say it feels like a play by Harold Pinter. The excellent Laurie Metcalf says a line and then there … is … a … pause before Willis responds.”

According to Australian news website news.com.au, director Matt Eskandari, who had worked with the actor on several films including Surviving the Night and Hard Kill, seemingly confirmed Willis’ memory loss problems while replying to a comment under Red Letter Media’s video.

It is worth mentioning that Eskandari’s comments addressing Bruce Willis degenerative condition from dementia have since been deleted, so it is still advisable to take this information with a grain of salt.

“I read somewhere that Bruce Willis has dementia, that’s he’s not really aware of what’s going on around him and he’s being exploited by his handlers. if that’s true this is all truly tragic,” wrote one user addressing the latest episode of Half in the Bag.

In turn, Eskandari allegedly replied through his personal YouTube Channel, “Yes this is true my guy I directed four movies with him so I know first hand. It’s [a] sad situation seeing a legend like Bruce deteriorating right in front of your eyes. I saw it while working with him [the] last few years”.

News producer and short film director Dan Przygoda  also backed the claims that the Twelve Monkeys actor is battling dementia, writing under Red Letter Media’s Twitter post for the Bruce Willis episode, “Bruce Willis is allegedly suffering from dementia and uses an earpiece so someone can feed him his lines right before he says them.”

He continued, “Have heard this from several people who have been involved in a couple of these movies.” 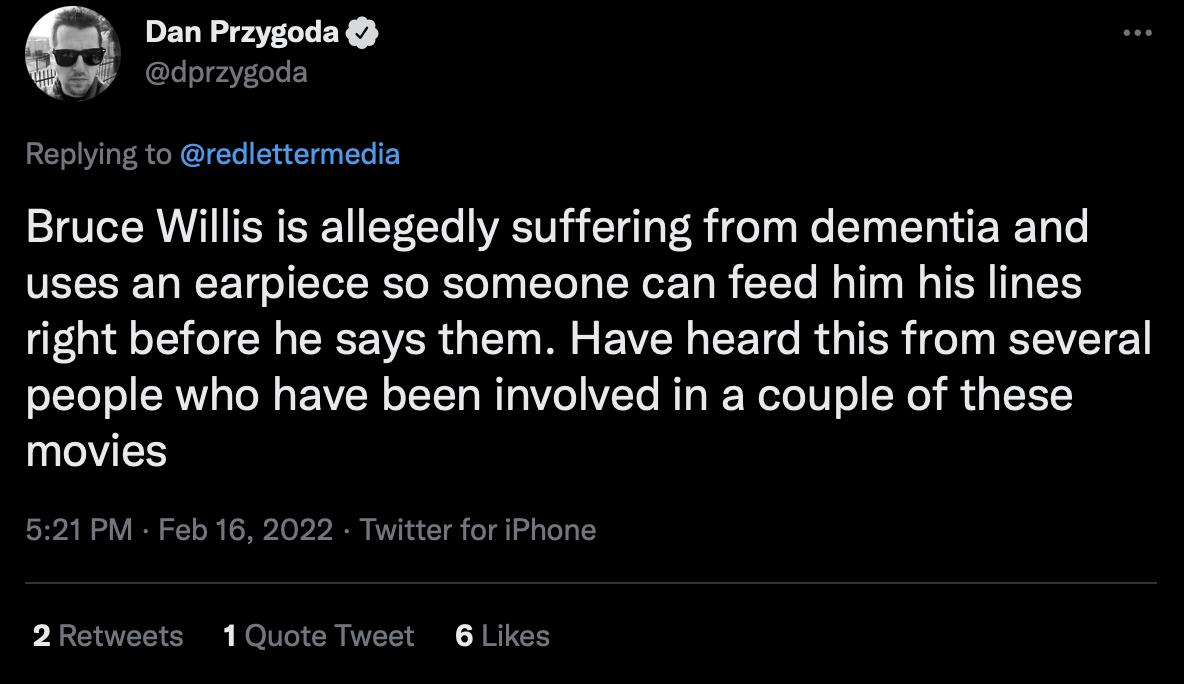 “Have also heard he appears confused a lot of the times but one of the activities he still enjoys/seems to ‘bring him back’ is smoking a cigar so I think that’s why there’s that extended smoking scene in Apex,” he wrote in a follow-up tweet. 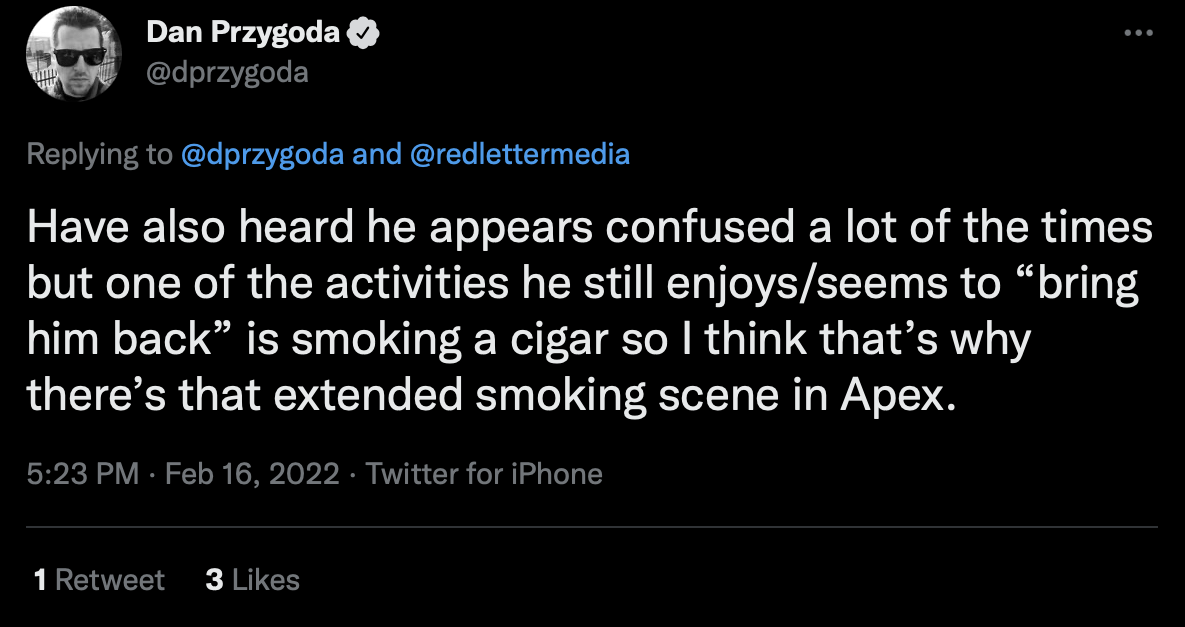 @davidmarkland replied to Przygoda’s comment, writing,”It’s called an ear wig and is a technique used by several actors, including Johnny Depp. Not a sign of dementia or even a bad actor… Though doesn’t disprove either possibility either.”

“Which is why what I said is not based solely on the fact that he’s wearing an earpiece but is also from several people who have had experiences with him on several of these movies,” was the short film director’s response. 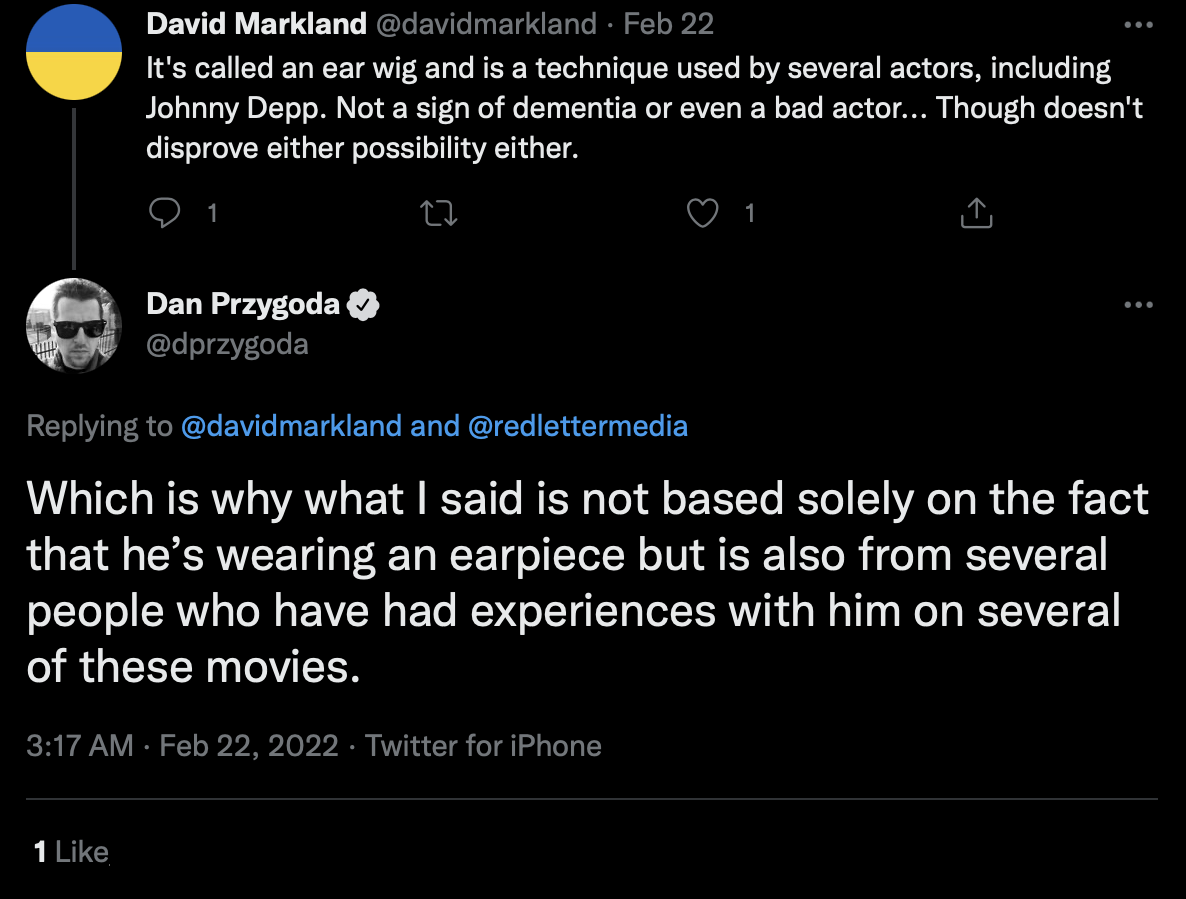 What do you make of the rumour that Willis may be suffering from dementia? Let us know your thoughts in the comments section down below or on social media.

NEXT: Charlize Theron Campaigns For Lesbian Version Of Die Hard