Jared Leto is slated to debut as the living vampire Morbius in a live-action SSU film dropping on April 1st, and it remains to be seen whether it can emulate the unexpected success of its spiritual predecessor Venom. The character isn’t particularly well-known outside of comic book fandom, which means his first silver screen appearance will either be a hit, or a flop.

In the meantime, newcomers should definitely bite down on a few key Marvel Comics storylines that have presented the fearsome anti-hero in the best possible light…err, dark. Let’s see how many you can soak up before Morbius hits theaters, then mark down how many comic book plot threads made it into the final film. 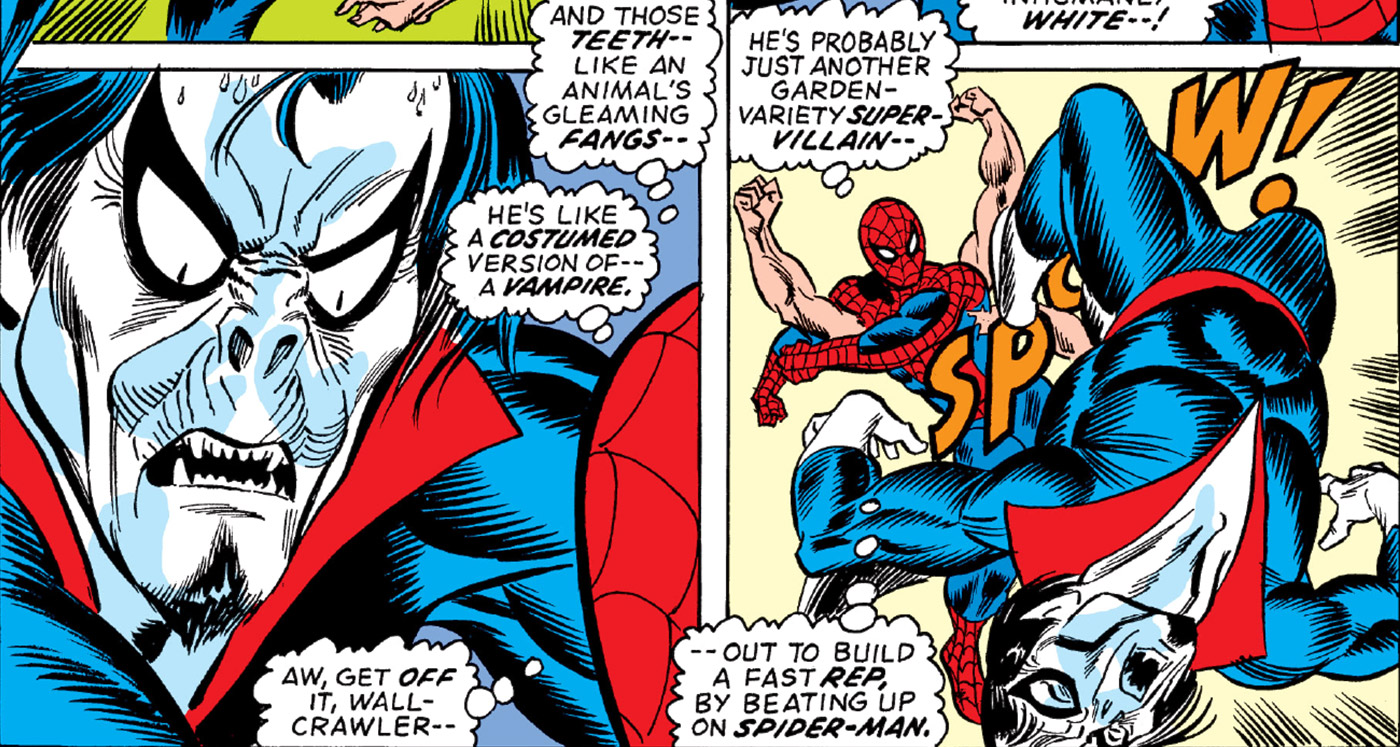 Michael Morbius was first introduced to comic book readers back in 1971 as a seemingly villainous monster duking it out with a multi-limbed Spider-Man. It ended up shedding some light on the character’s origins, including his rare blood disease which left him in a permanent state of disability.

Later, he’d make great strides in the field of genetic research alongside his friend Emil, but when they decided on a risky and untested treatment method, it ended up cursing him with a terrifying side effect. Once feeble and frail, Morbius now possessed superhuman strength and uncanny, horrific abilities. 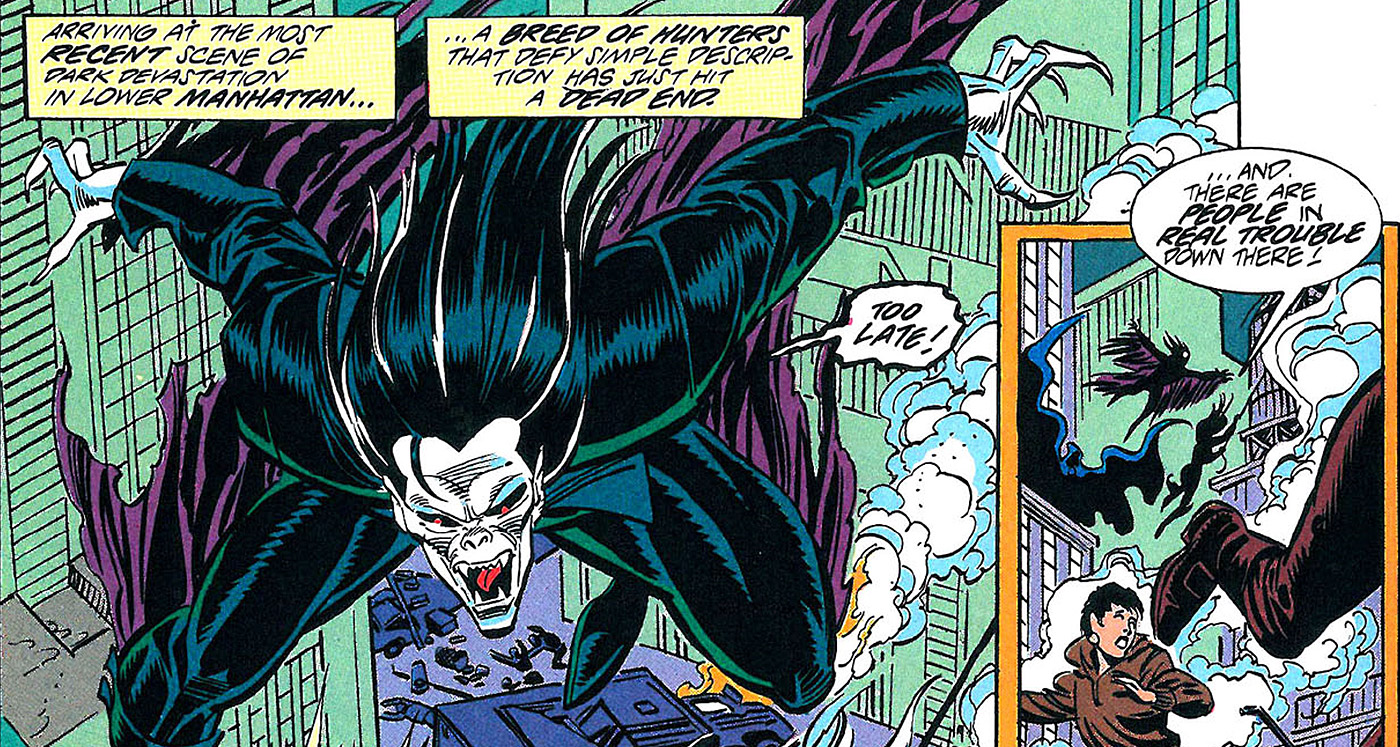 Morbius crossed paths with alien symbiotes several times over the years, including a brief tiff against Venom, but that was nothing compared to his actions during the Maximum Carnage storyline. This sprawling multi-issue epic featured Cletus Kasady and his symbiote other wreaking havoc alongside his partner Shriek.

It was an opportunity for Morbius to pursue the right course of action, even if it meant teaming up with the very same Spider-Man who he fought against so many years prior. Plus, it was great to see him rubbing shoulders with the likes of Deathlok, Iron Fist, and the Black Cat.

A Match Made In Hell (Lizard: No Turning Back) 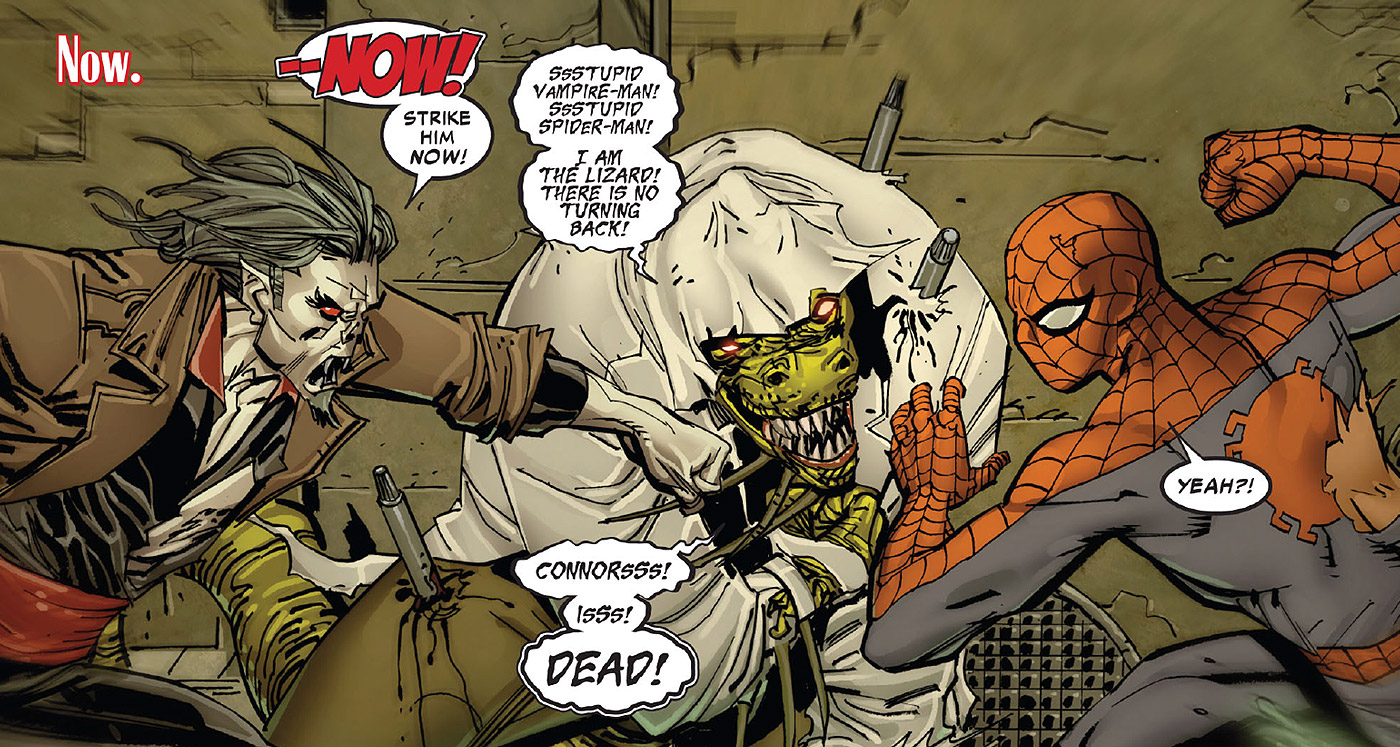 Source: The Amazing Spider-Man/Lizard: No Turning Back, Marvel

This 2012 storyline showed a kinship between Morbius and Dr. Curt Connors, otherwise known as the Lizard. Both had attempted to heal themselves, only for their treatments to backfire and turn them into monstrous creatures. In the tale, Morbius attempts to cure himself and the Lizard, before things go awry.

Spider-Man ends up going on the offensive against Morbius while numerous Lizards get loose, and begin wreaking havoc. Here, Morbius is portrayed as a man with great intentions who ends up remorseful over how easily his plans fell into ruin, which speaks volumes about his character.

An Occult Bonanza (Rise of the Midnight Sons) 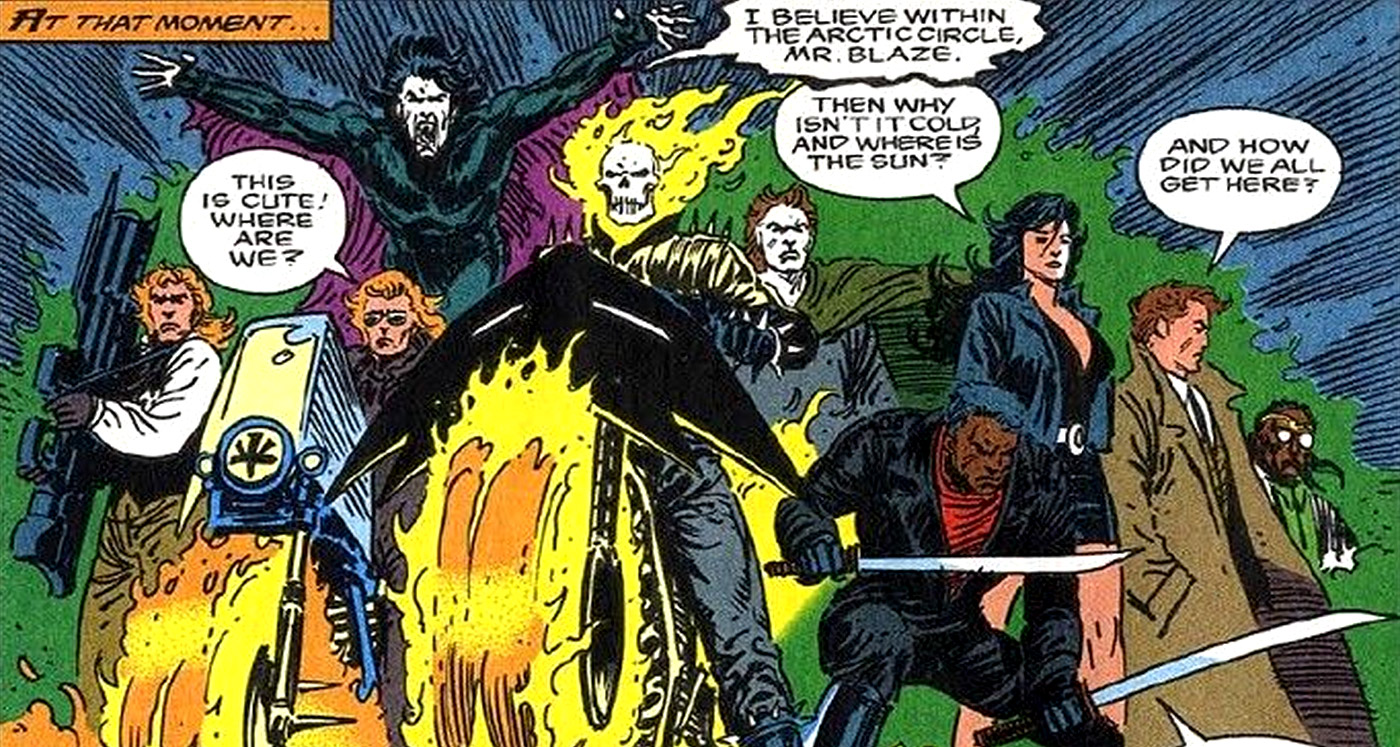 The early 90s saw Morbius take on a similar career path as Venom, battling evildoers with a variety of violent methods. In this tale, Morbius shrugs off his villainous past and tries to turn over a new leaf, but he soon bites off way more than he can chew when monstrous demons invade New York.

Doctor Strange decides to slap together a loose team consisting of the Nightstalkers, The Darkhold Redeemers, Ghost Rider and Blade, along with Morbius, to fight off a would-be apocalypse. The Midnight Sons brand didn’t last very long, but Morbius’ appearance in this story was one for the books. 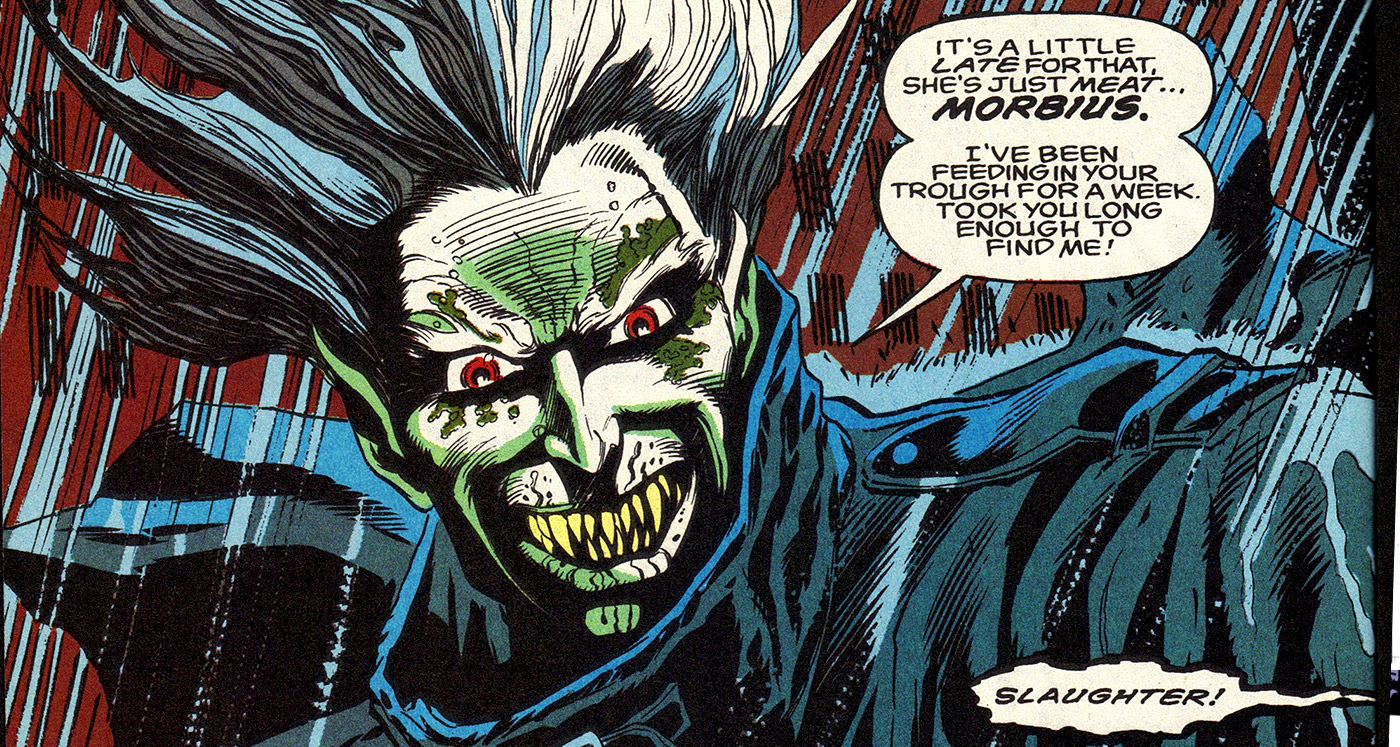 Every hero (even an anti-hero) needs a good villain to outmatch them from time to time, and Vic Slaughter is one such character. This particular story revolves around Victor Slaughter, a former CIA operative suffering from PTSD who would later be tasked with hunting down Morbius.

The two fought to a brutal end, with Morbius seemingly killing Slaughter, and burying him alive in a makeshift grave. However, Morbius had inadvertently infected Slaughter with a similar vampire disease, turning him into a monstrous enemy, and an even more lethal killing machine.

A Ghost From The Past (Morbius: Bond of Blood #1)

Michael Morbius’ first kill was none other than his lab partner and friend Emil Nikos, and it was a death that weighed heavily on the living vampire’s conscience throughout the years. This 2021 story brought Morbius back full circle by sending him down the same dark path again.

It all starts when Morbius learns that Emil’s young son is dying of an illness. Morbius eventually strikes a deal with Doctor Zabo to infiltrate Ravencroft and steal research documents in return for a life-saving vaccine. However, tragedy strikes again, and Morbius is left with another painful reminder of the cost incurred for messing with nature.

The 70s got off to a zany start with this elongated epic focusing specifically on Michael Morbius gallivanting between worlds. It begins with Morbius attacking an innocent woman after falling victim to his own bloodlust, which sets off a chain of events that ends up stranding him on an interdimensional world.

From there, it’s a bizarre concoction focusing on Morbius battling the Caretakers of Arcturus, bantering with aliens that have eyeballs for heads, and dodging the pursuit of none other than the vampire hunter Blade. It’s a weird, wacky, yet altogether interesting read with a lot of twists and turns that would never fly in comicdom today. 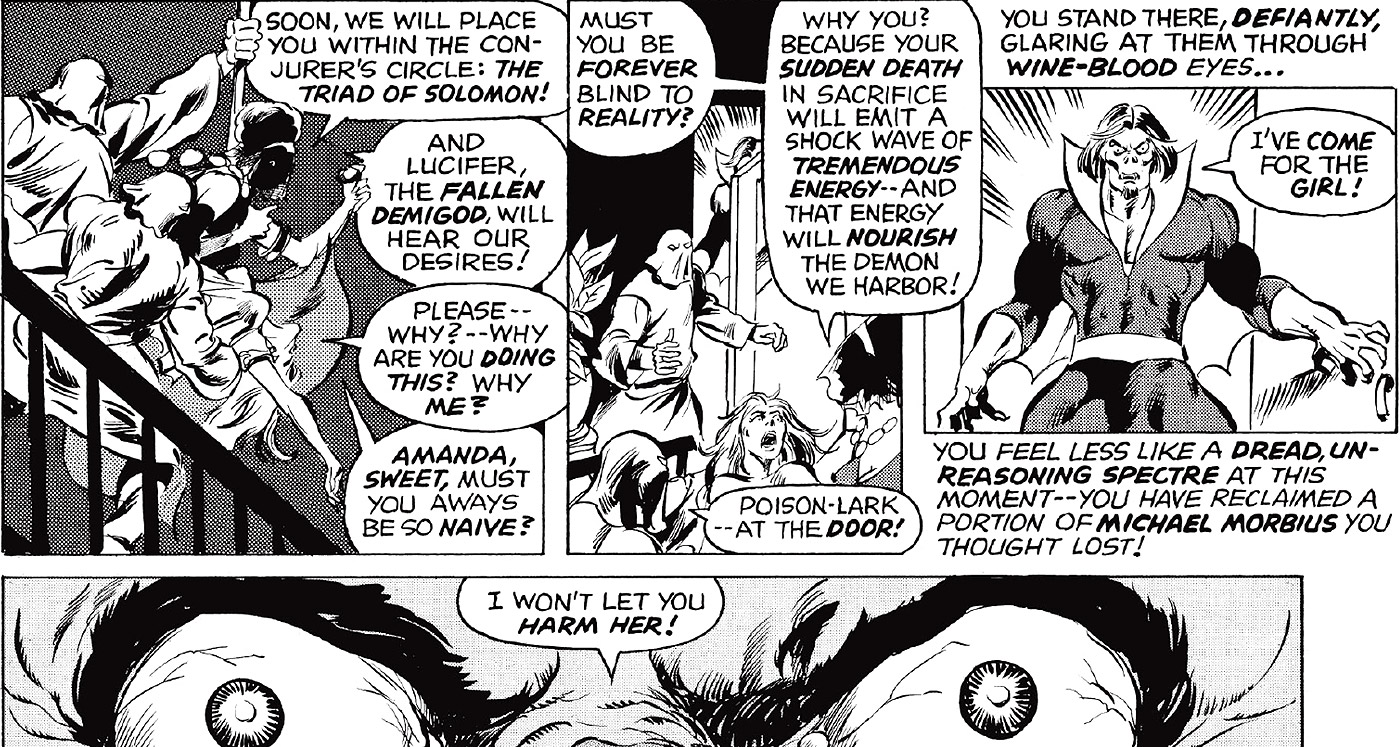 This black and white story straight out of Vampire Tales is one of the creepiest, and best of the decade. It’s also one of the best stories featuring Morbius, dousing the narrative with a rather wicked and unsettling plot revolving around his attempt to save Amanda Saint from a fate worse than death.

Morbius eventually battles a gigantic demon spider summoned by a group of occultists, and the effect is made so much better by the lack of color on the page. It’s grim, dark and foreboding, without losing the kinetic action that comes with any good classic comic book.

RELATED: Francis Ford Coppola Says Marvel Films Are “One Prototype Movie That Is Made Over And Over Again To Look Different” 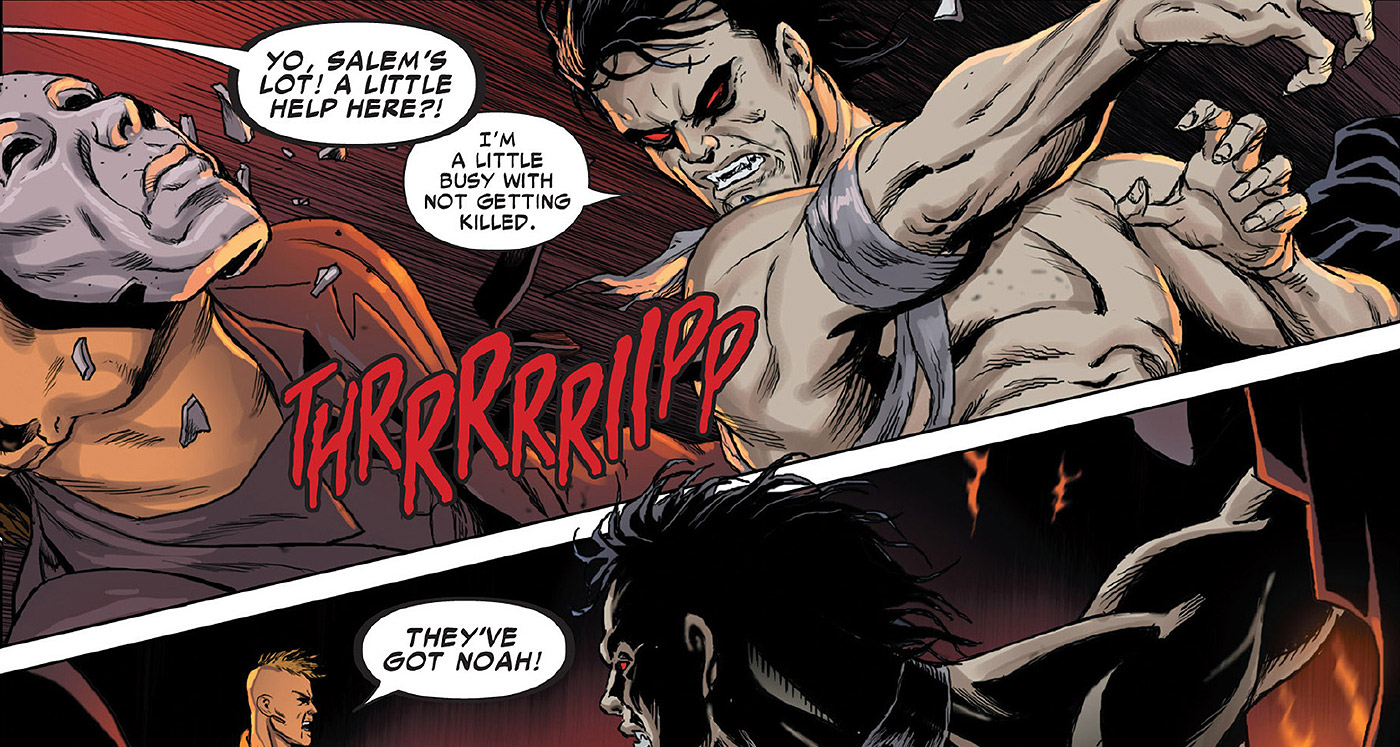 What’s worse than dealing with supernatural demons, overpowered villains and pesky street thugs? That question got answered in this 9-issue 2013 series featuring Morbius trying to thwart a plan to extinguish thousands of lives using a small-scale version of the Ultimate Nullifier.

This series jettisoned Morbius’ typically dramatic speech in favor of a more contemporary approach, but the history was still there. It was a far cry from the anti-hero’s lustrous history, but the story did bring back a lot of key characters, while referencing past events that helped shape Morbius’ life. 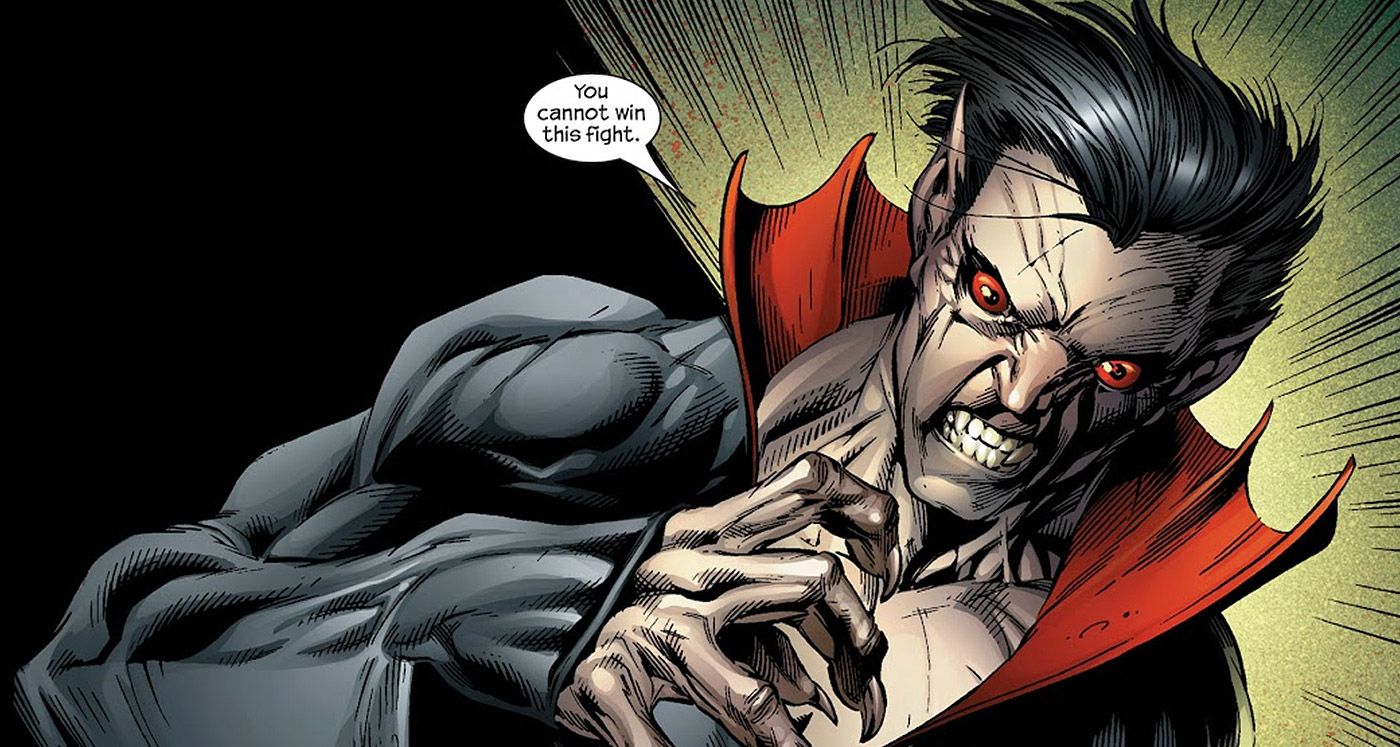 While Earth-616’s version of Morbius was an actual living vampire bred of scientific means, his Earth-1610 Ultimate counterpart was born directly from the supernatural. In this alternate universe, Morbius was a direct descendent of Vlad Dracul II, more commonly known as the inspiration for Count Dracula.

Like before, Morbius battles his inner demons and bloodlust in order to hunt down vampires, rather than proliferate their existence. Some fans prefer this version of Morbius due to his supernatural origins, while others prefer the novelty of Morbius as a creature created by genetic science.