The latest official Moon Knight clip appears to tease more of the same from Marvel Studios as it shows actress May Calamawy as Layla El-Faouly savaging a bunch of goons while Oscar Isaac’s character stands around and watches.

As you can see above, the clip shows Layla El-Faouly encouraging Isaac’s character to summon his Moon Knight suit. However, he visibly does not understand what she’s talking about.

It’s understandable given Isaac’s playing Moon Knight and previous trailers have indicated he appears to have multiple personalities and the right doesn’t know what the left is up to.

She then gives him some kind trinket telling him to keep it safe. Apparently their little conversation is none to pleasing to Ethan Hawke’s Arthur Harrow, who begins to perform a summoning ritual while his goons attempt to keep Layla and Isaac’s character contained.

As they attempt to escape up a staircase, Layla is able to exit the room, but Isaac’s Steven Grant is confronted by one of Harrow’s goons. However, some kind of time anomaly appears to take place as Isaac is shown once again climbing the stairs and Layla’s character is pummeling the goon at the top of the stairs.

She beats the goon so badly that she slams him up against a wall and then tosses him off the balcony into a pile of wood. As the two then flee the scene, Isaac’s Grant exclaims, “That was awesome.”

The clip ends with Harrow finishing off his ritual and some kind of demonic creature clawing its way out of the portal.

RELATED: Marvel Artist Declan Shalvey Reveals He Will Not Be Paid For Appearance Of His ‘Mr. Knight’ Design In Disney Plus Moon Knight Series

The clip saw numerous fans criticize it on Twitter.

Quasar2967 wrote, “Would have been nice to actually see some Moon Knight in the show called Moon Knight.”

YouTuber Jayne Theory wrote, “So, he’s literally just going to stand by and do nothing.”

Paugose wrote, “I regret to not live in a world were Moon Knight was adapted by Mario Bava, Dario Argento or Lucio Fulci, those were the only ones who could have pulled it off and give Marvel’s Master of Macabre justice. Instead I got Disney and SFX that look like a Charmed episode.” 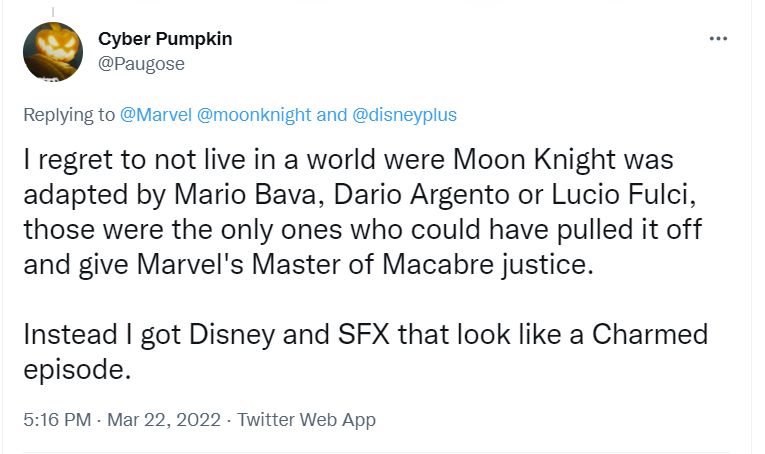 Samura35 stated, “‘Summon the Suit’? Oh Jesus Christ why is the suit magic? its not supposed to be magic. He just puts it on. I knew from the first trailer that shows was going to be a disappointment.” 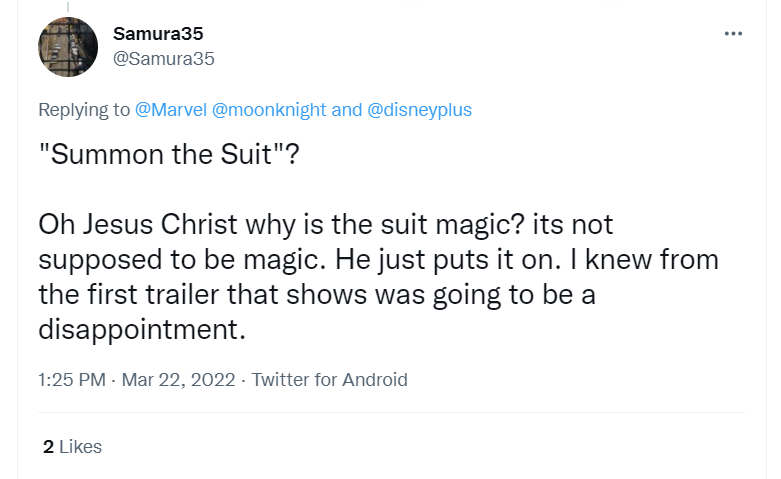 JesterofRoanoke wrote, “She sure was lucky that she ran into that very accommodating stunt man. Imagine if she had run into a real bad guy.”

Winofair85 tweeted, “Yet another character ruined by the MCU & here I was actually somewhat excited to finally see a live Action Moon Knight.” 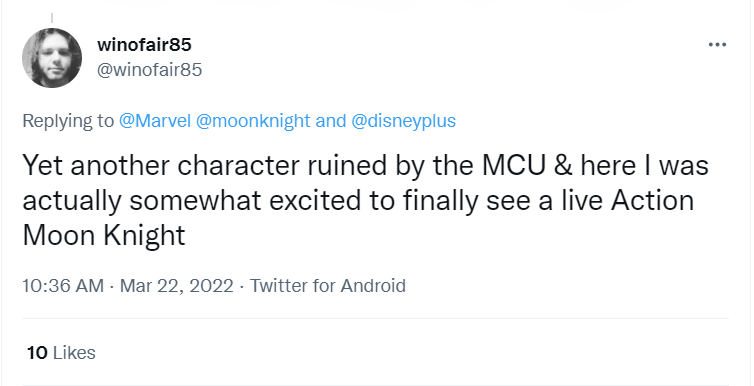 YouTuber Nina Infinity wrote, “Marvel is creatively bankrupt. The strong, independent wahmen trope is tired af but they insist on continuing with it because they think it’s actually edgey… ”

Marvel is creatively bankrupt. The strong, independent wahmen trope is tired af but they insist on continuing with it because they think it’s actually edgey… 🥱 https://t.co/LOOaeKXulc

The official description for Moon Knight reads, “The story follows Steven Grant, a mild-mannered gift-shop employee, who becomes plagued with blackouts and memories of another life. Steven discovers he has dissociative identity disorder and shares a body with mercenary Marc Spector. As Steven/Marc’s enemies converge upon them, they must navigate their complex identities while thrust into a deadly mystery among the powerful gods of Egypt.”

What do you make of this latest clip from Moon Knight?

NEXT: New Rumor Details How Moon Knight Disney Plus Series Fits In With The MCU