The version of Godzilla vs. Kong that was released is considered the definitive edition by its director Adam Wingard although he also admitted he had five hours’ worth of footage by the time he entered the editing bay.

Eiza Gonzalez, who played one of the principal human villains, corroborated Wingard’s assertion in an interview with The Hollywood Reporter where she remarked much of the film changed greatly. The storyline, for one, was altered along with her character Maia Simmons’ own subplot.

She had a phantom costar in Game of Thrones actress Jessica Henwick who filmed all her scenes but the role was cut in its entirety for sake of time. “And Jessica getting cut out of the movie really affected all of the other characters,” Gonzalez continued.

“But it wasn’t anything to do with Jessica’s character,” she added. “It was just that the storyline changed because the movie is called Godzilla vs. Kong and it obviously has to service them. They’re the big stars.”

RELATED: Son of Kong Seemingly Confirmed As Follow-Up To Godzilla vs. Kong

Overall, though, Gonzalez doesn’t feel upstaged and had fun making the film that became one of the hugest hits of the lockdown era. “But listen, I’m just grateful that I got to do a really fun movie,” she said. “I really enjoyed that shoot.”

She added, “I really enjoyed working with Adam [Wingard] and my cast. I love Legendary and Warners. So my experience was really good, but that’s just par for the course, sometimes.”

Her only regret was that GVK didn’t get seen in more theaters under normal circumstances. “You learn so much by doing these movies, and I’m just really happy that we were able to release that movie,” she said.

Coming out day-and-date on HBO Max didn’t hurt the film’s chances but Henwick, Gonzalez, and also Lance Reddick, Ziyi Zhang, and Ken Watanabe sacrificed their hard work and screen time in the process.

Along with Eiza Gonzalez’s confirmation of her character’s storyline being changed, there were a number of other rumors that never made it into the film. Among them are Mechagodzilla possessing an onboard ORCA to trigger Godzilla and an untapped back story for Ren Serizawa that reveals he designed the MonsterVerse’s Oxygen Destroyer. 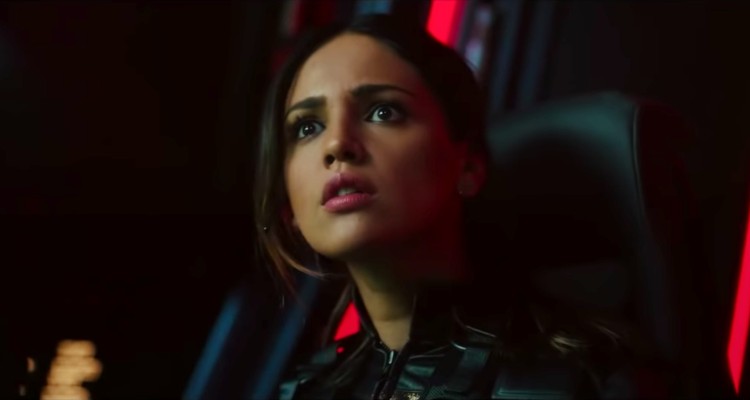 We probably won’t ever know if any of that is true or what we missed out on, but it doesn’t hinder the film at all and the ever-expanding MonsterVerse isn’t the worse for wear. Just ask Wingard and Legendary Pictures, now in production on the Monarch TV series and Son of Kong.