We know the campy Batman series of the 1960s influenced Matt Reeves to a point, but this is ridiculous – and I’m being serious.

YouTube channel Corridor re-edited The Batman’s main trailer so that it stars the late actors Adam West and Burgess Meredith as their respective portrayals of the Caped Crusader and the Penguin instead of Robert Pattinson and Colin Farrell.

It is as goofy as advertised – and not to mention kind of dumb – but we encourage you to judge for yourself.

Corridor accomplished its parody with some deep fakes of West, Meredith, and others including Burt Ward and  Frank Gorshin that are rather janky for the most part. It’s okay, though, when there is a quick shot of West doing the Batoosie. That makes up for anything egregious.

One other exception is the appearance of the 60s-style Batmobile in the rain-drenched car chase. The ride looks very convincing superimposed over Pattinson’s in the dank storm and shadowy lighting, especially when it rams the escaping Penguin.

The video, good for a few harmless laughs, is trending to the point The Hollywood Reporter took notice and gave it their appraisal. “The video is only 90 seconds long — but is so much fun that it feels longer,” they said.

THR adds, “The old-school villains in the modern trailer are phenomenal, but arguably the best moment is West’s Batman dancing around to dodge bullets.”

When Corridor’s video dropped, it garnered 500,000 views in 24 hours. Views now stand at 1.7 million and climbing.

Meanwhile, The Batman as it is on HBO Max is apparently doing very well too – so well, in fact, it is outpacing Zack Snyder’s Justice League on the platform, per Samba TV.

Samba’s data shows “720k US households watched Robert Pattinson suit up  in The Batman on the day of its HBO Max release, while 389k watched Ben Affleck don the cowl in Zack Snyder’s Justice League on the first day of its premiere last March.” 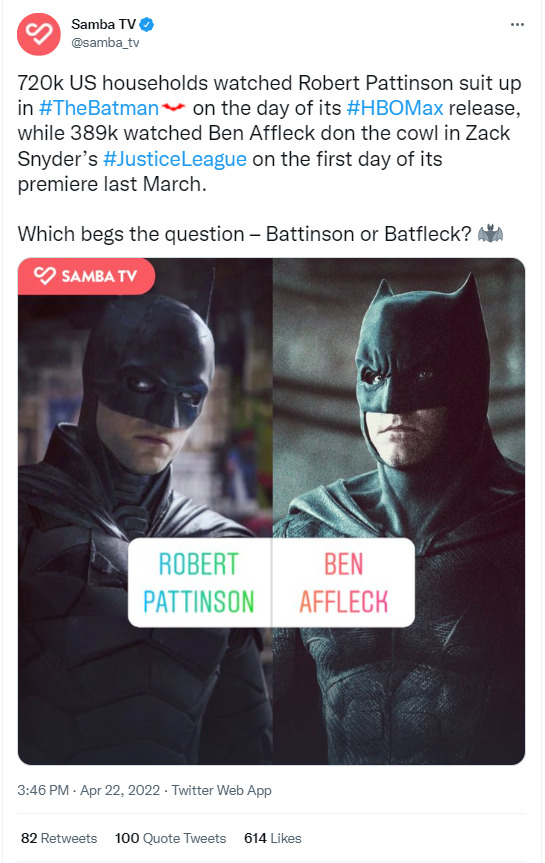 That’s almost double the viewership swinging in favor of Pattinson’s portrayal and Matt Reeves’s vision for the Dark Knight, which doesn’t paint a propitious picture for The Snyder Cut or the tenacious efforts of its supporters that won the epic an Oscar.

Still, when Samba conducted an amateur poll to decide if Batfleck was better than Battinson, people voted in a landslide for the former. 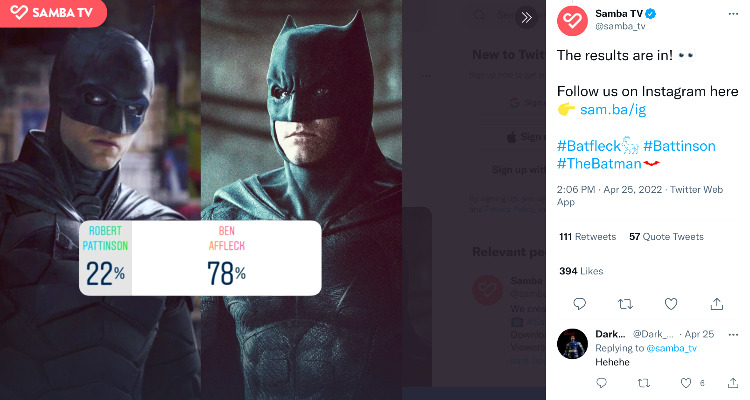 Where do you fall in that debate? Tell us that and if you enjoyed Corridor’s Adam West parody below.