The Pokémon Company have released a new trailer for Pokémon Scarlet and Violet, revealing new Pokémon, the release date, multiplayer features, and more. 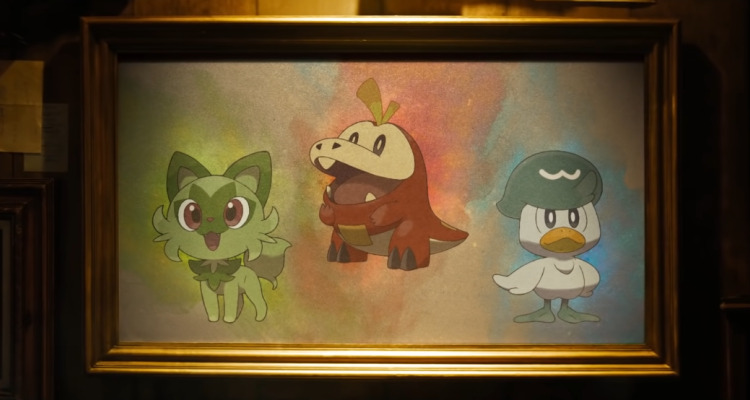 The trailer appears to show an overview of the player’s first steps, along with our first look at the starters in 3D and the professors. Additional information was also gleamed via the official website.

The region seems to have two professors, differing depending on the version you play.

Professor Sada (in Scarlet) appears to be inspired by the ancient past, while Professor Turo (in Violet) has a futuristic aesthetic. Both are “carrying out research into certain lore passed down in the region.” 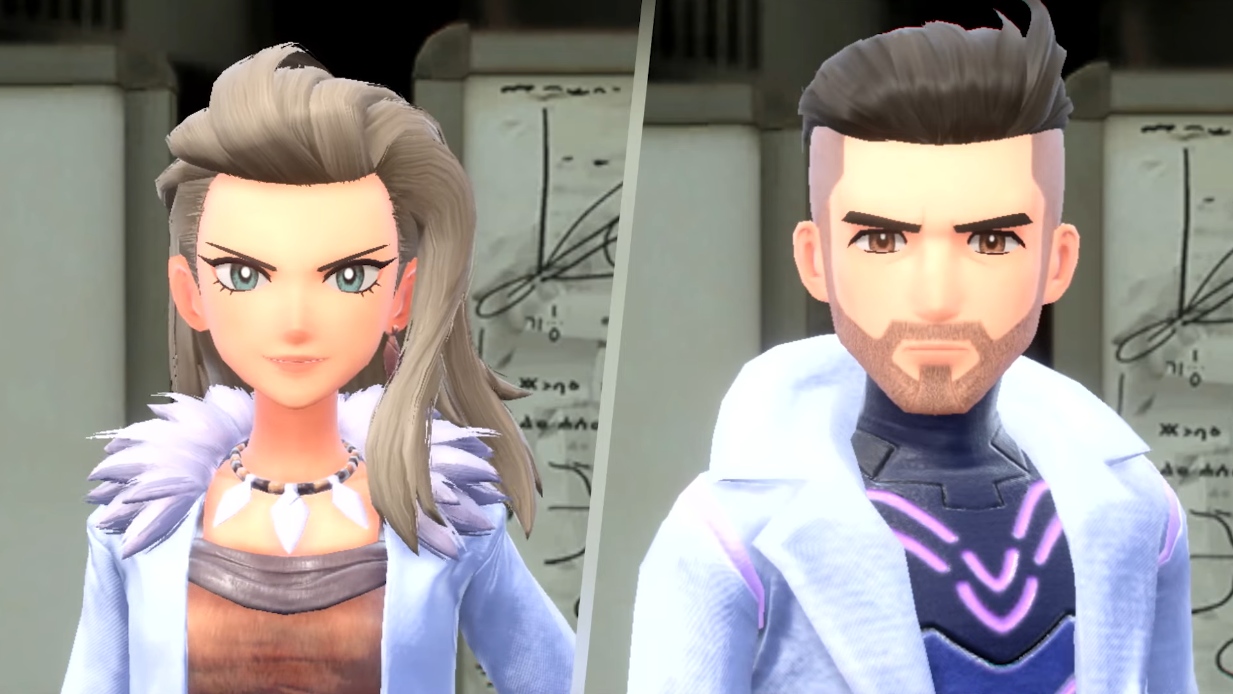 We also see a new trainer Nemona- who could be anything from a rival trainer to the Professor’s aide. Her biography on the official website notes she is a skilled trainer who will act as a guide, though she’s not the best at throwing Pokeballs.

Nemona is shown releasing Pawmi (Electric Type, Abilities Static and Natural Cure), which seems to be this region’s electric rodent. The official website also states two of the other new Pokémon shown in the trailer are used by her.

Along with its electric sacs on its cheeks, its forepaws can also store electricity. By rubbing its cheeks, it can then jolt foes by touching them with its paws. Its thick fur also helps insulate it- in more ways than one. 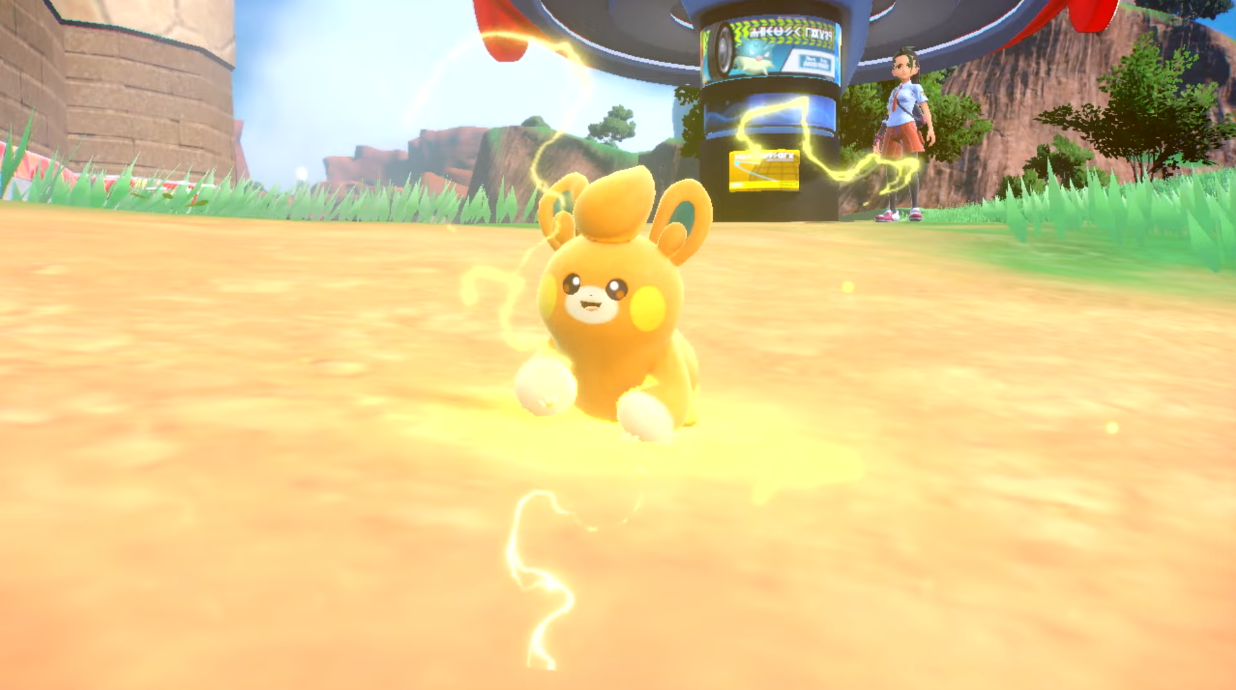 RELATED: Opinion: What Can Mainline Pokémon Games Learn From Spin-Offs Like Arceus, Go, And Colosseum

Trainer battles also appear to return to the camera angles as shown in prior games, though the Pokémon are spaced quite a ways apart. However, the camera angle used may purely be via debug mode and for promotional purposes.

As noted by the “technology is amazing” NPC- a recurring trope where the character discusses the game’s latest feature. Up to four players will be able to play together, exploring the world, and possibly even taking part in each other’s campaigns. 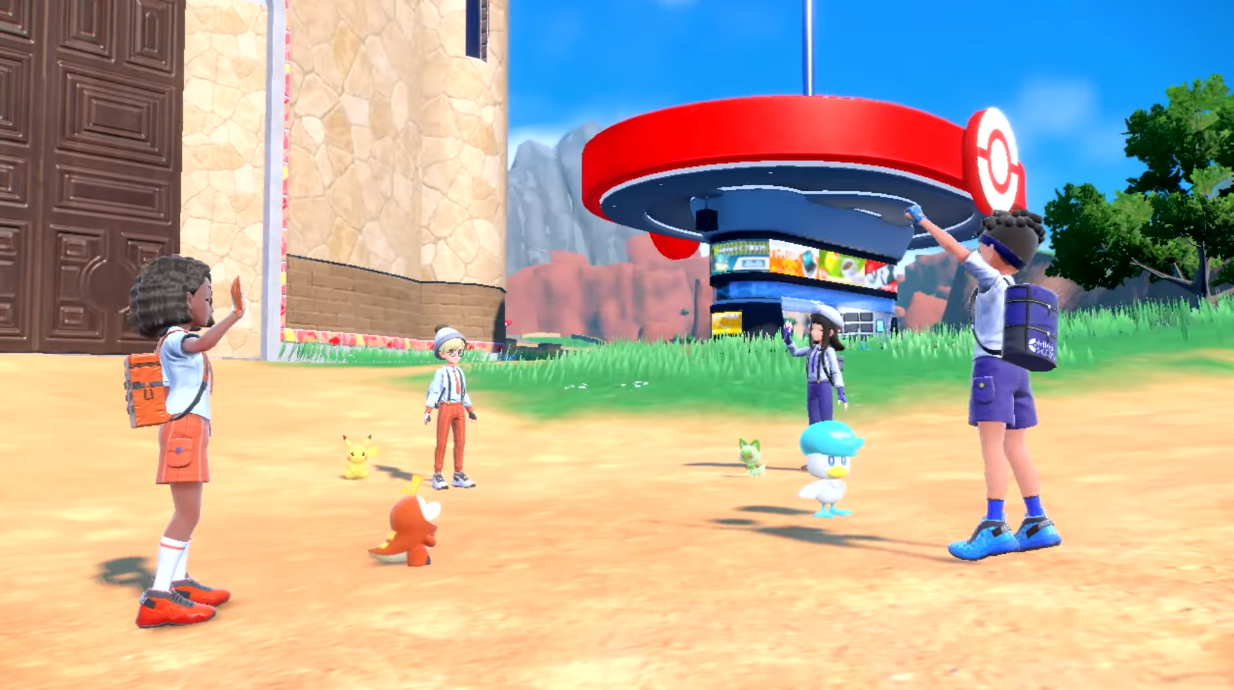 Players appear to be able to freely roam in the world as they could in Pokémon Legends: Arceus, but whether all wild Pokémon are shown or some can be hiding in grass is unknown. We do see a player sneak up on a new olive-like Pokémon- Smolive (Grass/Normal Type, Ability: Early Bird) and a small pig like Pokémon- Lechonk (Normal Type, Ability: Aroma Veil, Gluttony)- wander up to another player. 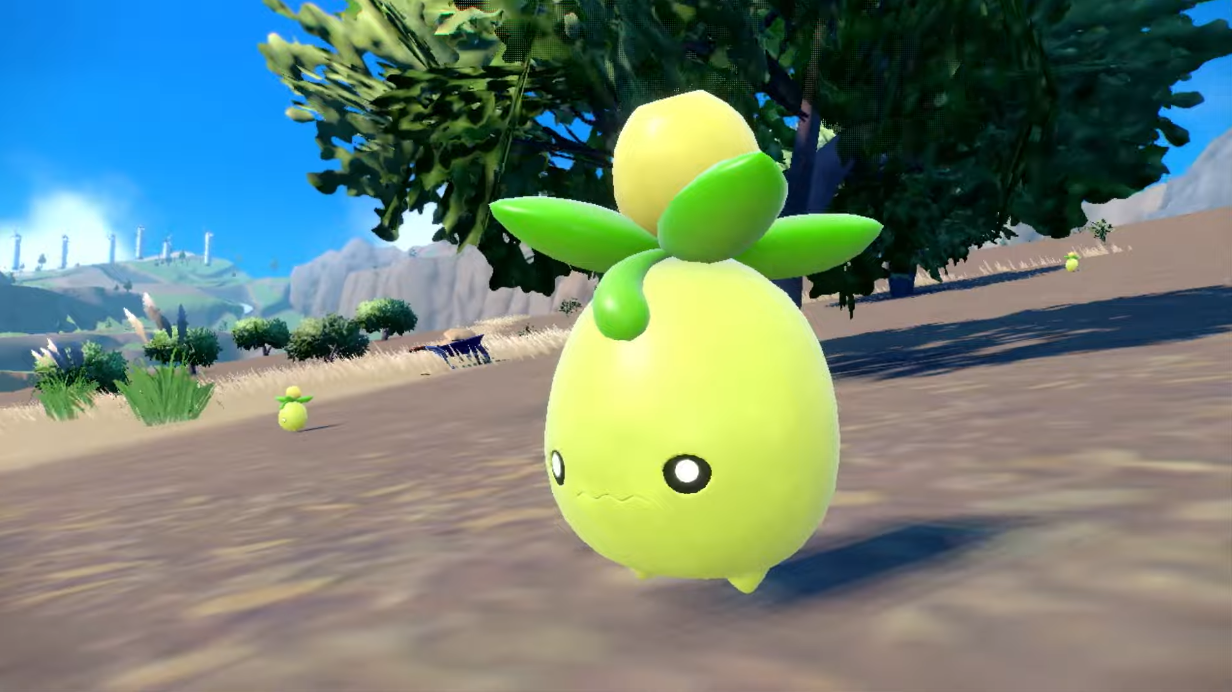 Smolive releases an incredibly bitter oil from the top of its head, which it fires to drive away foes while it runs away. It also stores this oil in the fruit on its head, meaning it can go for days without food or water thanks to photosynthesis.

Lechonk’s nose is used to help it find fragrant wild grass and rich berries. Its diet has resulted in its body giving off a herb-like smell that drives away Bug Pokémon. Despite its portly shape, its body is mostly muscle- well maintained thanks to walking to find food. Its bulk also helps when its panicked, causing it to charge wildly into the offender.

We also get to see the battle UI, though nothing leaps out of note as of yet. The status check screen from Sword and Shield appears to return, which was absent during Brilliant Diamond and Shining Pearl. Physical attacks seem to once again take liberties in animation, as Lechonk’s tackle makes no physical contact with the player’s Pokémon.

The large red buildings seen in the debut trailer seems to be some kind of mid-route Pokémon Center. Based on the signs at the counter, players may be able to heal their Pokémon, buy items from the PokeMart, and access online services (though these have been accessed from the menu at almost any time in other recent games).

The trailer also shows a glimpse at what could be the Gyms, or their equivalents. Based on their designs, it seems there will be Grass, Fire, and Ground type Gyms. 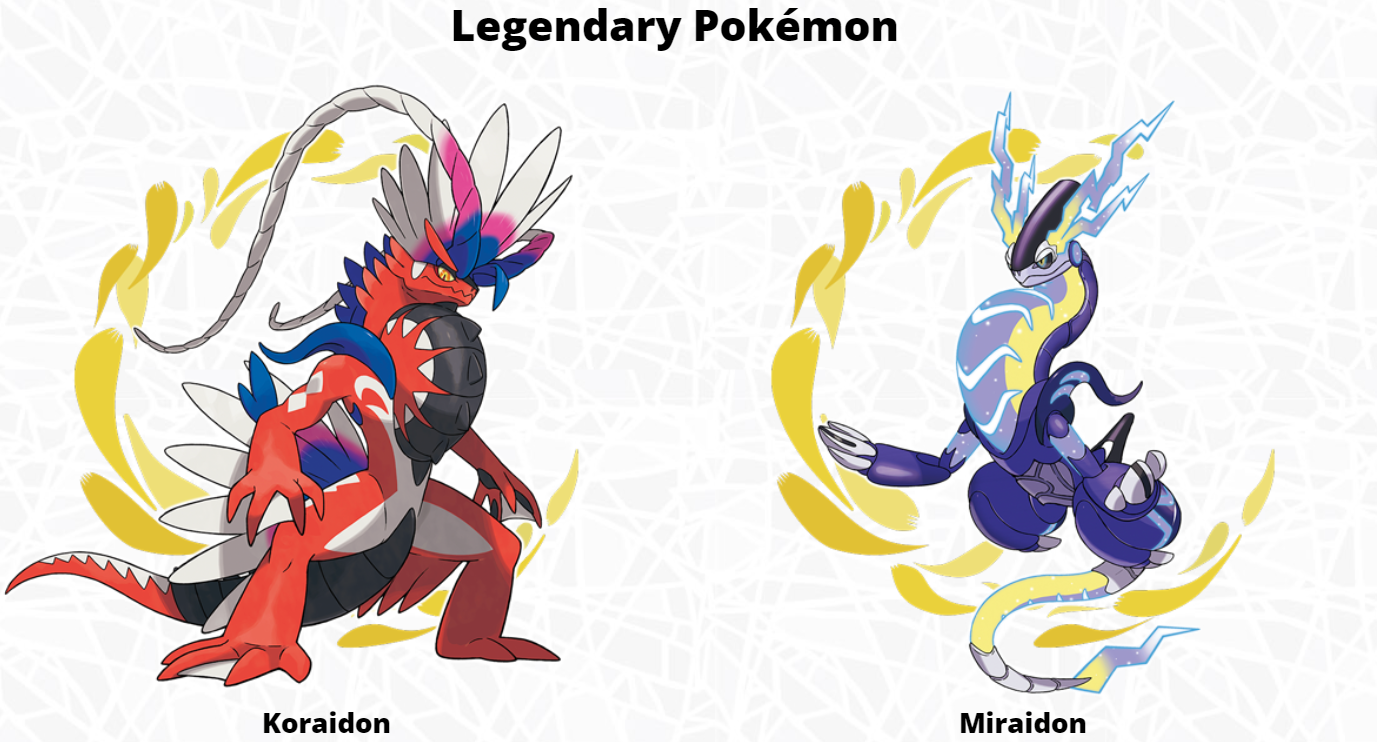 Finally, we see what appears to be the games’ “box” legendary Pokémon. Much like the professors, both designs seem to evoke the ancient past or the future.

Koraidon resembles a feathered lizard with what almost looks like a tire in its chest, while Miraidon is a dragon with jet-engines on its feet and a digital display on its eyes and stomach. The official website merely states “These two Pokémon are said to have powers that far surpass those of other Pokémon, but details about Koraidon and Miraidon are still shrouded in mystery.” 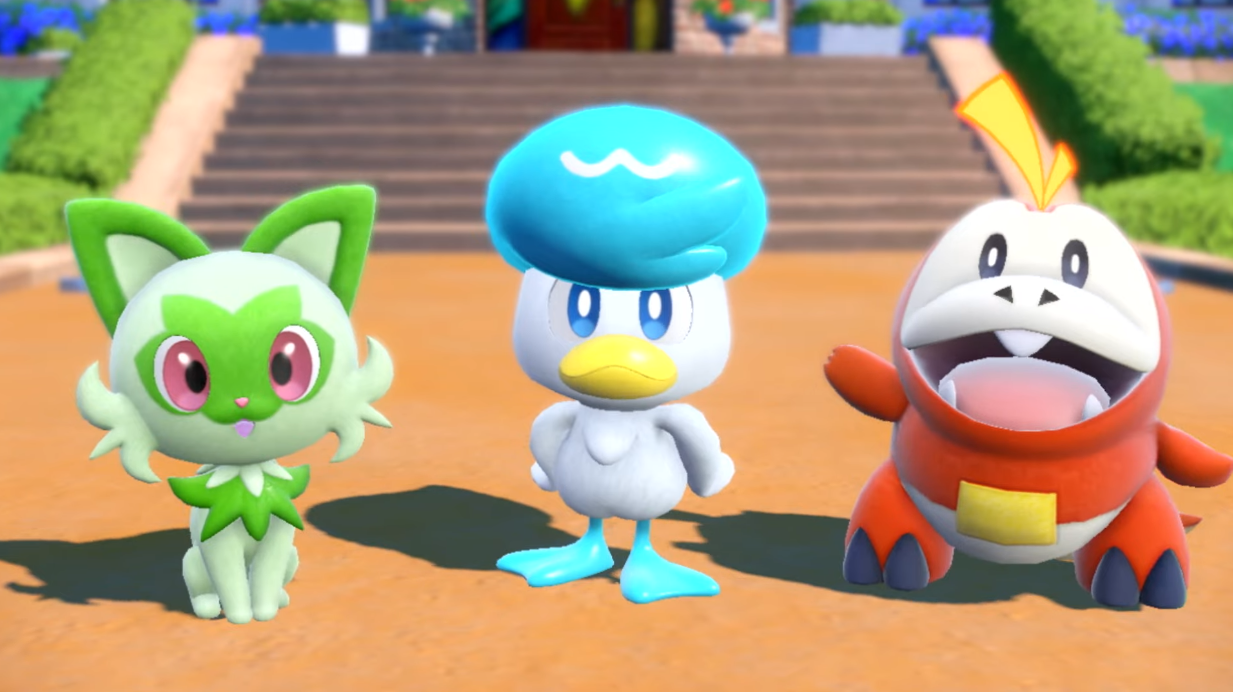 NEXT: Japan Championships Sableye To Be Distributed In Pokémon Sword And Shield