A Western video game localizer has taken issue with the upcoming Project Code Name M for probably the most random thing we’ve ever seen outside of a Me & Roboco manga chapter: a female character’s knees. 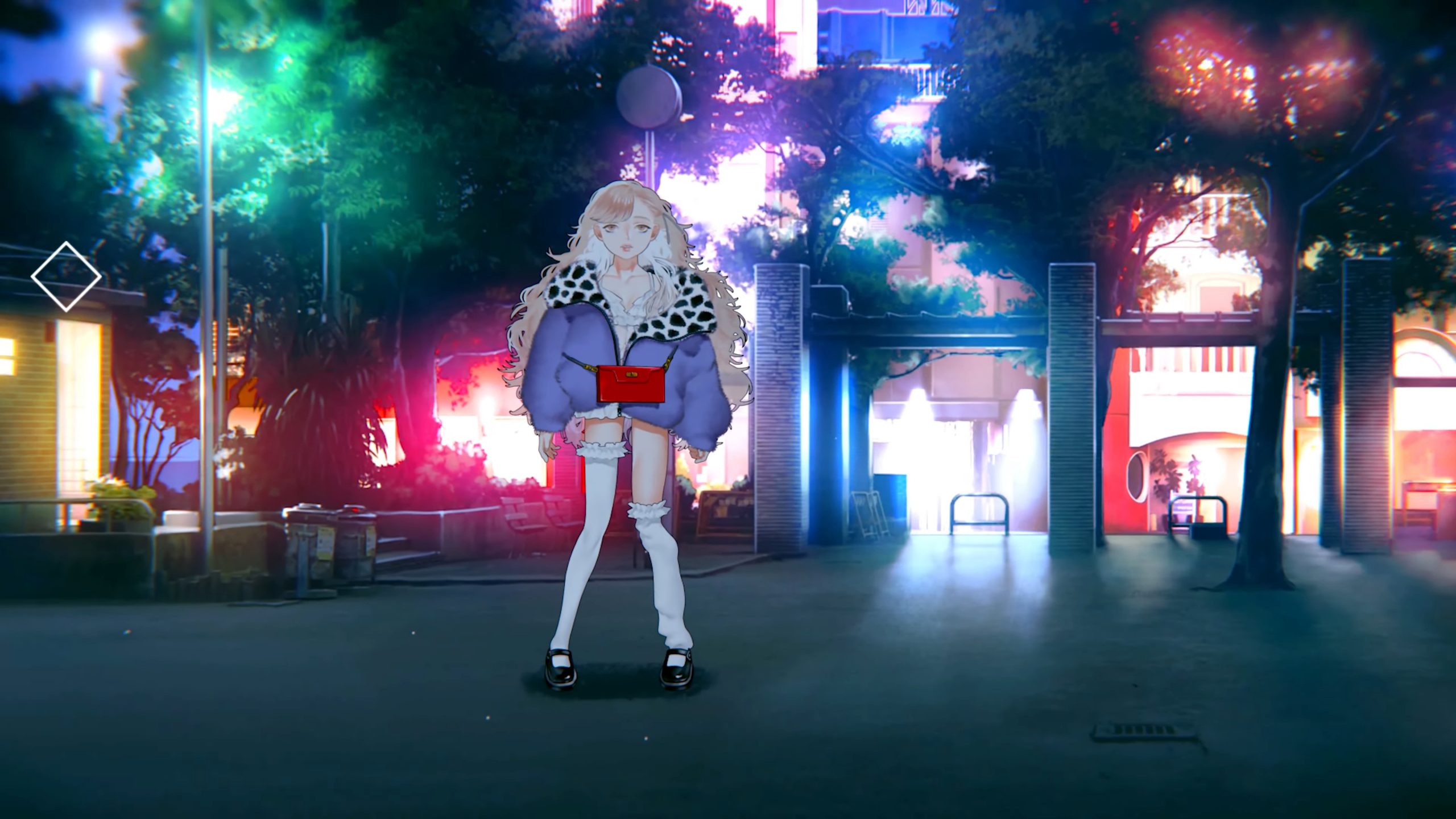 On May 28th, Japanese developer NOVECT (Novectacle) tweeted out a brief animation cycle showing Marianne, a central character from their upcoming Project Code Name M, knobby-kneed and slightly bobbing as she stood in a park. 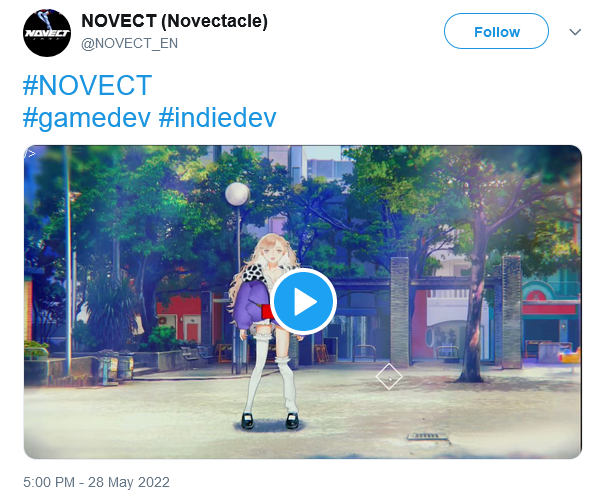 Responding to the tweet, Twitter user @HkonMK responded, ‘Hmm the movements on the legs is a bit too much and unnatural maybe, but the character design and background looks great,” which in turn prompted an agreeing response from self-reported Western video game localizer @RoriiDoudy.

“Yeah, that’s what I thought,” they said. “I work in video games, and whenever Japanese designers send us these kind of designs for female characters’ legs with inwards knees, we reject them as unnatural.”

The localizer added, “I wish they’d do more anatomically correct legs for women…” 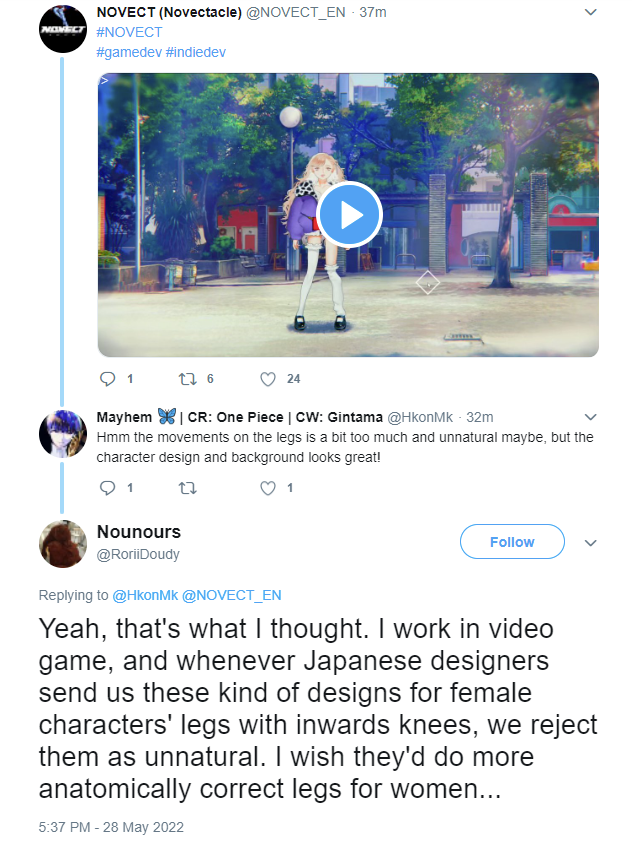 However, NOVECT founder and The House in Fata Morgana author Hanada Keika was not exactly happy with this localizer’s attempt to ‘correct’ Japanese culture, joining the conversation to inform them that “Walking and posing with the inner toes is kind of JP’s culture (often seen in kawaii) and in fact many young girls who do so.”

“We don’t feel this is unnatural (it does look like too cutesy though) would be happy if you would not ‘correct’ our culture and the taste of Jp girls,” he declared in the first of a series of now-deleted tweets. 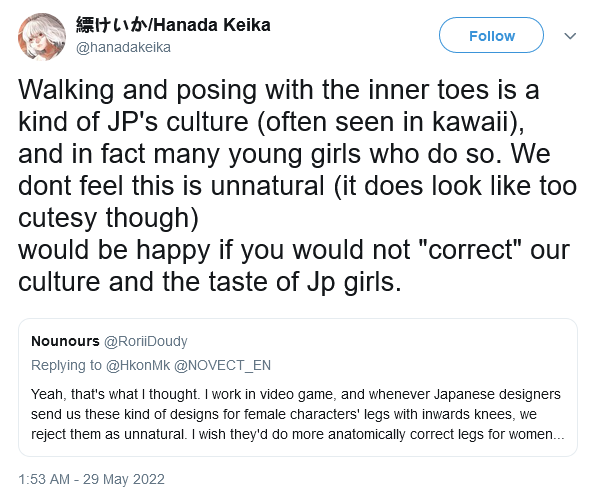 Backpedaling immediately in the face of push back from Keika, @RorriDoudy put the blame for their accusation on the studio they worked for.

“I’m sorry if this offended you, sensei,” they apologized, proceeding to give us some inside info on the Western video game localization industry. “This is the rules for the workplace that I work in. In well aware of the kawaii culture, I’m part of the harajuku scene myself, and I’ve posed like that too. But you have to understand that this is the process of localisation (1/2)

“And sometimes, when it’s overly exaggerated, it also offends people here. So nobody can win, really” concluded @RorriDoudy, her attempt at clarification only begging the question of who at this particular localization studio would be offended by knees.

“I understand there are different cultures and some of them are unacceptable,” replied Keika. “We don’t intend to be careless in order to offer our games globally. Not sure how deal with the girl with the inner legs though…but we are going to be careful about the expressions in the game.” 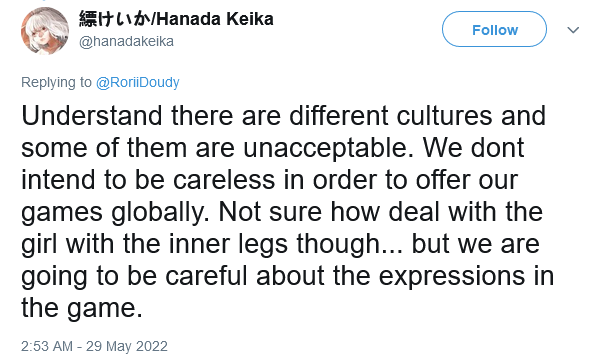 The localizer then asserted “No worries sensei!” before revealing that they were nonsensically holding the content in a game meant for older audiences to the standards of their own workplace, itself a reportedly “very big game company that offer games mainly intended for young children”.

“That’s why we have to be extra careful,” they said. “Sensei’s game will probably be rated for teenagers and older, so you’ll be fine!” 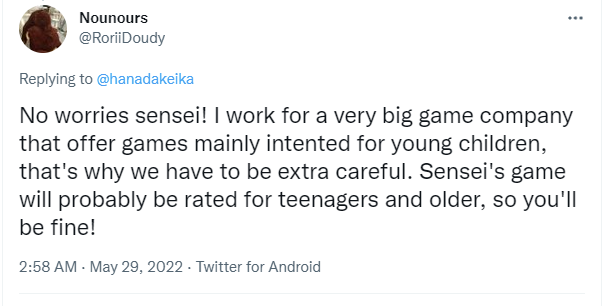 @RorriDoudy would draw a further response from Keika after offering a “friendly correction” to a Twitter user who opined that there were “Too many prudish westerners who think their way is the right way these days.”

“It has nothing to do with being to prudish!” said the localizer. “Sometimes, when it’s overly-exaggerated, it looks like there’s a problem the knee bones of the character, hence why we ask to fix it so it looks just a bit more natural.” 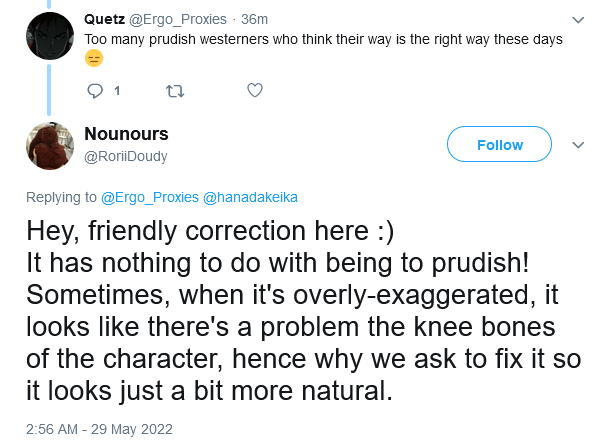 “Yeah I understand the intent,” the NOVECT head wrote in return. “I also tweeted about it, but the video game playing is quite fast and could be seen as exaggerated. We’re in the process of creating the motion as well, so we plan to adjust it so it looks more natural.  In any case, Glad for the input thanks.” 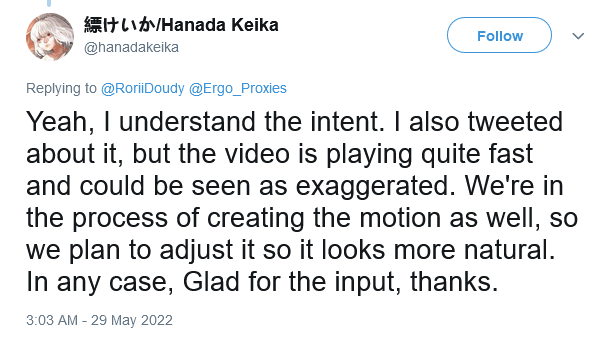 @RoriiDoudy then concluded the discussion”I’m so happy you understand! (;Д;)ノIf you ever want to discuss about localisation for western audiences, such as things that are seen as possibly strange, feel free to send me a message and I’ll be happy to give you an opinion from a professional loc editor’s point of view 😊” 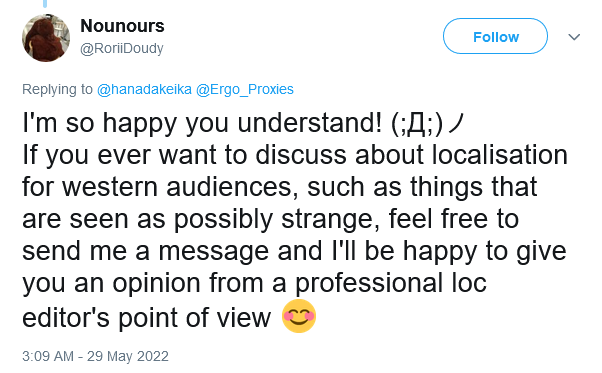